The National Gallery of Victoria (NGV) in Melbourne recently opened what may be its most ambitious exhibition: Melbourne Now, on display until March 23 next year.

It features hundreds of works selected by 30 curators, occupying more than 8000sqm of space spread across both NGV sites – NGV International and the Ian Potter Centre at Federation Square – with a number of off-site locations. What kind of show merits such a grand scale?

It’s a show with a deceptively simple title, but a closer look reveals the complexity of the exhibition’s remit. Melbourne Now showcases: “art, architecture, design, performance and cultural practice to reflect the complex creative landscape of Melbourne.”

In, of, from, about Melbourne

Many of the works on display are by artists originally from Melbourne, or born elsewhere and now working in Melbourne: the city as domicile thus provides the rationale for their inclusion. But at the same time, the exhibition is trying to show what kind of city Melbourne is, or might be, or might have been.

As if that isn’t complicated enough, “Melbourne” is not just something that is represented in the artworks on display in the galleries.

The NGV itself is part of Melbourne, a fact acknowledged in this show by the display of some of the artworks off-site in the city (such as a number of specially designed flags) and by the NGV’s first ever sponsorship of a major street art event.

NGV takes to the streets

ALLYOURWALLS is located in the two laneways best known for street art in Melbourne, Hosier Lane and Rutledge Lane, just across from the Ian Potter Centre at Federation Square. The event involved the top-to-bottom repainting of most of the two laneway walls with dozens of street-art and graffiti pieces. 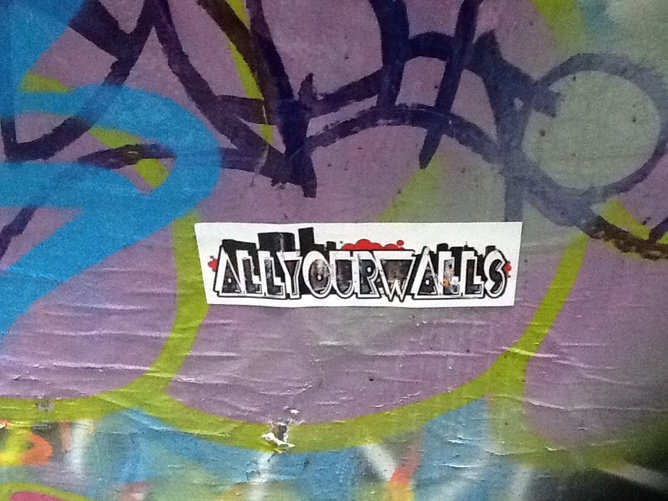 The event was financially supported by the NGV, and curated by the creative individuals involved in the magazine Invurt, the website Land of Sunshine and creative management outfit Just Another Agency.

Installation took a month and involved good-natured cooperation among individuals and crews who might normally find themselves competing for wall space in Melbourne’s streets. Old-school writers such as Paris and Peril, and the KSA crew put up work alongside newer artists such as Adnate and the AWOL crew, Tom Civil, and Kaff-eine.

It’s the first time the NGV has put its name to a street-art event, and marks a new horizon in the possibilities for collaboration between the formal institutions of the art world and the art that exists on the street.

The street in the gallery

And in Melbourne Now, the street has also been invited into the gallery.

A number of the exhibiting artists depict Melbourne’s graffiti-covered walls: Michelle Hamer creates a streetscape of tags and signs in her woollen tapestries (such as Exit Only). In his painting Mobile Call, Rick Amor shows a man standing alone among grey concrete walls enlivened only by a solitary tag.

And Daniel Crooks’s glorious video work, An embroidery of voids, seamlessly blends film shot in many different Melbourne laneways, some graffitied, some overgrown, some inhabited by dogs, so that the viewer glides effortlessly through an endless, secret streetscape.

In its attempt to do justice to “the complex creative landscape of Melbourne”, the exhibition also displays work by two artists long associated with graffiti and street art in the city.

Ash Keating came to public attention in 2004 when he painted the hoarding over the Mockridge Fountain in Melbourne’s City Square using a paint-filled fire extinguisher. Melbourne Now includes two of his works: the stunning video piece West Park Proposition, which shows, on three screens, his transformation of a blank concrete wall into an artwork that blends harmoniously with its outer Melbourne setting.

For the second work, he was invited to paint, with fire extinguishers, a massive temporary billboard hung on the outer wall of the NGV itself. 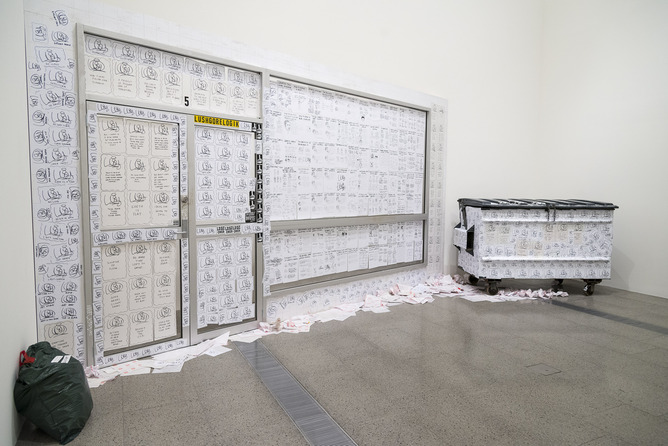 The other significant street artist in the show is Lush, who has created a shopfront installation that fills half of a small room, and comes with its own dumpster and piles of litter.

Many a shopfront and doorway in Melbourne has been covered with Lush stickers in almost the same way as the one in the NGV. The title of Lush’s piece, as with the exhibition itself, is posing a question to us: Graffiti doesn’t belong in a gallery?

In including the work of Ash Keating and Lush on the same terms as any sculptor, fine artist, architect or designer and in sponsoring ALLYOURWALLS, the NGV’s answer seems to be a resounding “yes”.

At least for the moment, for the NGV and for us, street art is part of Melbourne – part of what it means to live in Melbourne now.

Melbourne Now is on display at the National Gallery of Victoria until March 23, 2014. More details here.