How great is it to see a rebuilding team – that few had given hope of any significant success this season – clicking into gear to defeat a genuine top four contender?

This was a tough yet freewheeling display of manic, high-scoring – and, above all, accurate-scoring – football that owed much to the veterans of the club, but in the end belonged to the impetuousness of youth: the budding brigade of stars that look set to carry this growing outfit to many more such wins over the years to come.

But anyway, enough of the Hawks-Brisbane game.

I’m here to talk about another shitful Crows loss. 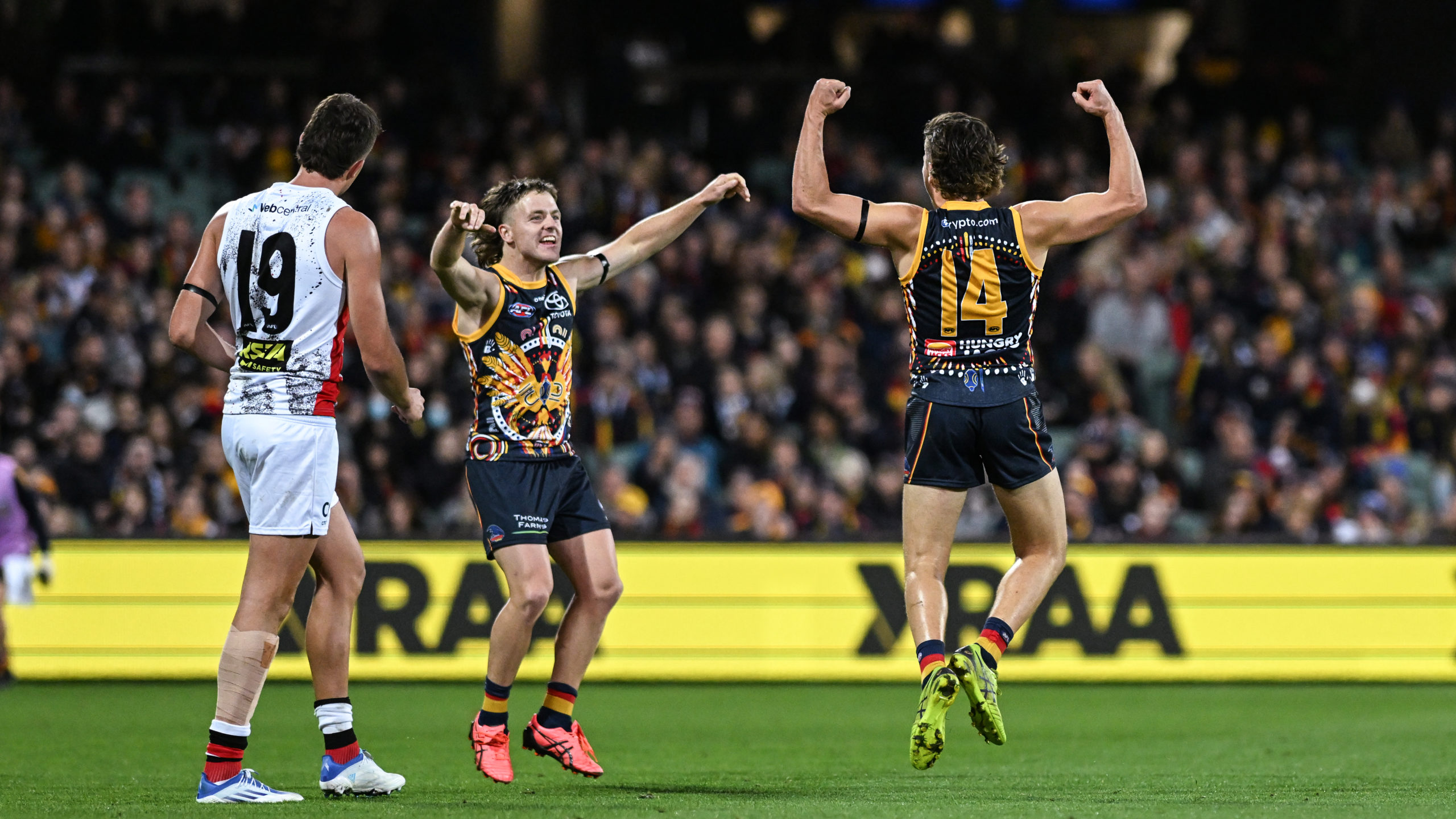 The way we wish the game had ended on Saturday. Photo: Michael Errey / InDaily

(Although I will suggest hopefully, albeit without conviction, that maybe we softened the Lions up for them last week?)

And to answer my initial question: how great is it to see a rebuilding team, that few had given hope of any significant success this season, clicking into gear to defeat a genuine top four contender?

Well, it’s been a while – but I seem to recall quite enjoying it. Once upon a time.

Although it doesn’t feel like something we’re going to be imminently enjoying again – particularly not with a looming visit to the Cats’ home turf, a venue at which we haven’t won in almost two decades.

And in football terms, two exceptionally long decades they were too.

Funnily enough, we were actually pretty good for most of them.

And back when we were good, I used to get what now appears in hindsight quite unreasonably annoyed at our occasional bouts of ineptitude (in my defence, they often came during knock-out finals, which in the scheme of things ranks among the worst possible times to endure random bouts of ineptitude).

But ever the contrarian, now that we’ve taken to losing more or less every week, I’m relatively stoic about the whole thing.

In some weeks, positively chipper in fact.

I mean, I get that this time last year, having done our now-traditional trick of winning three games from the first six rounds, collapsing against GWS at home and then losing comfortably for the next fortnight, we pulled off one of our greatest-ever victories against eventual premier Melbourne in a Saturday night Round 10 clash at Adelaide Oval.

So the parallels seemed uncanny when, having done our now-traditional trick of winning three games from the first six rounds, collapsing against GWS at home and then losing comfortably for the next fortnight, we went into the last change in our Saturday night Round 10 clash against St Kilda at Adelaide Oval ahead by nine points.

And by that, I do mean nine points – each one a perfectly painstaking miss. We had six goals 13 behinds to six goals four – a conceivable 54-point lead, instead reduced to a mere sixth of its potential. 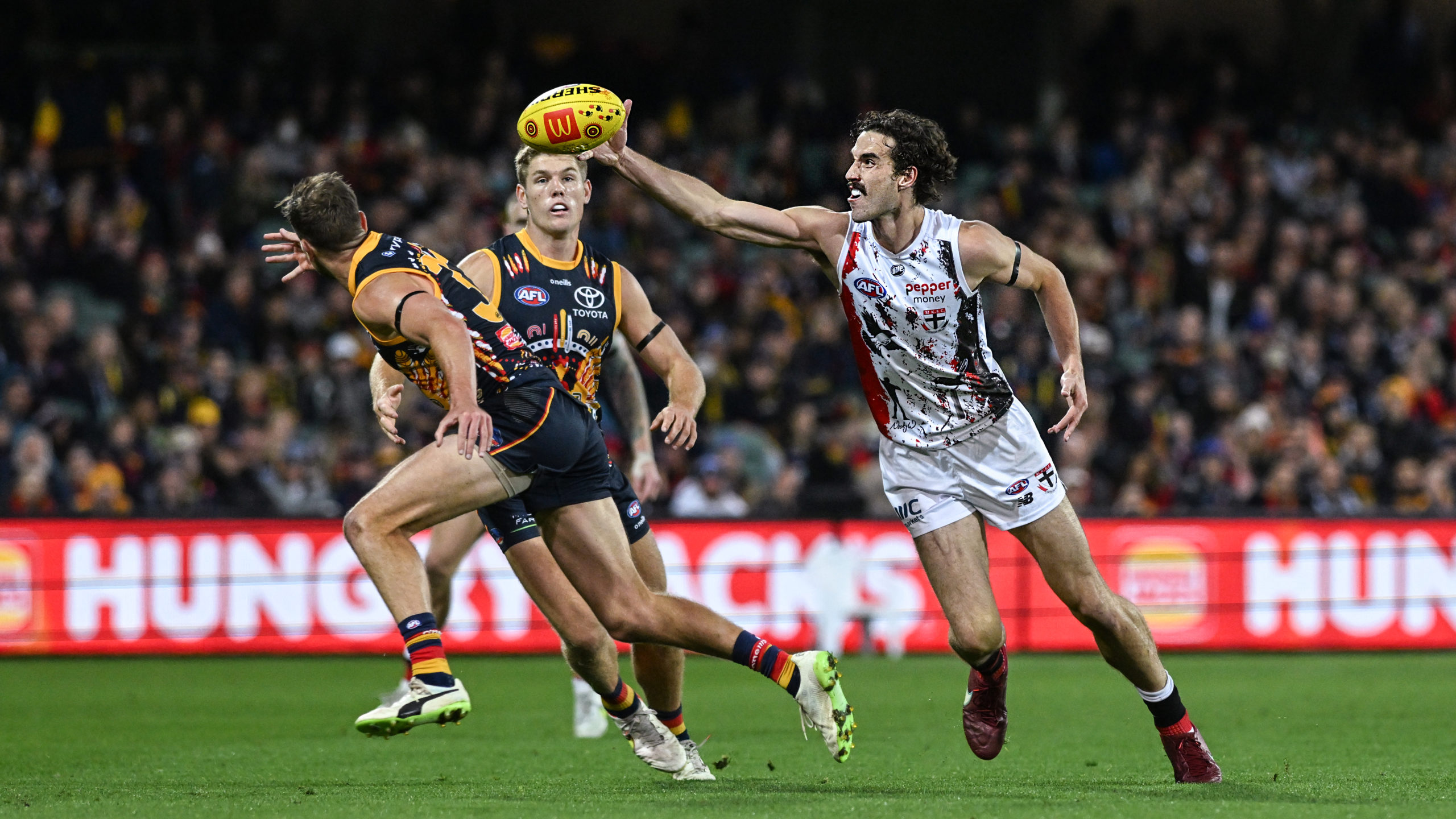 The night (much like the side) was young, the contest was too close to call and it was as yet impossible to predict a clear winner.

But anyway, enough of the federal election, which was fortunately so occupying much of the nation’s rapt attention they might not have noticed the Crows metaphorically tripping over their own feet in the fraught final term.

Wherein, having held St Kilda to a measly six goals in three quarters, we somehow let them rattle off eight in quick succession – including two in the final minute to wreck even the scant consolation that this was a close game throughout.

Moreover, we were torn a new one with no key defender capable of containing St Kilda’s 2018 draftee, Max King.

But (hear me out here) perhaps this is for the best.

And evidence there was: Soligo looks a player, Hately continues to find his place in the midfield, McHenry crashed about comfortably higher up the field and Thilthorpe added presence up forward. 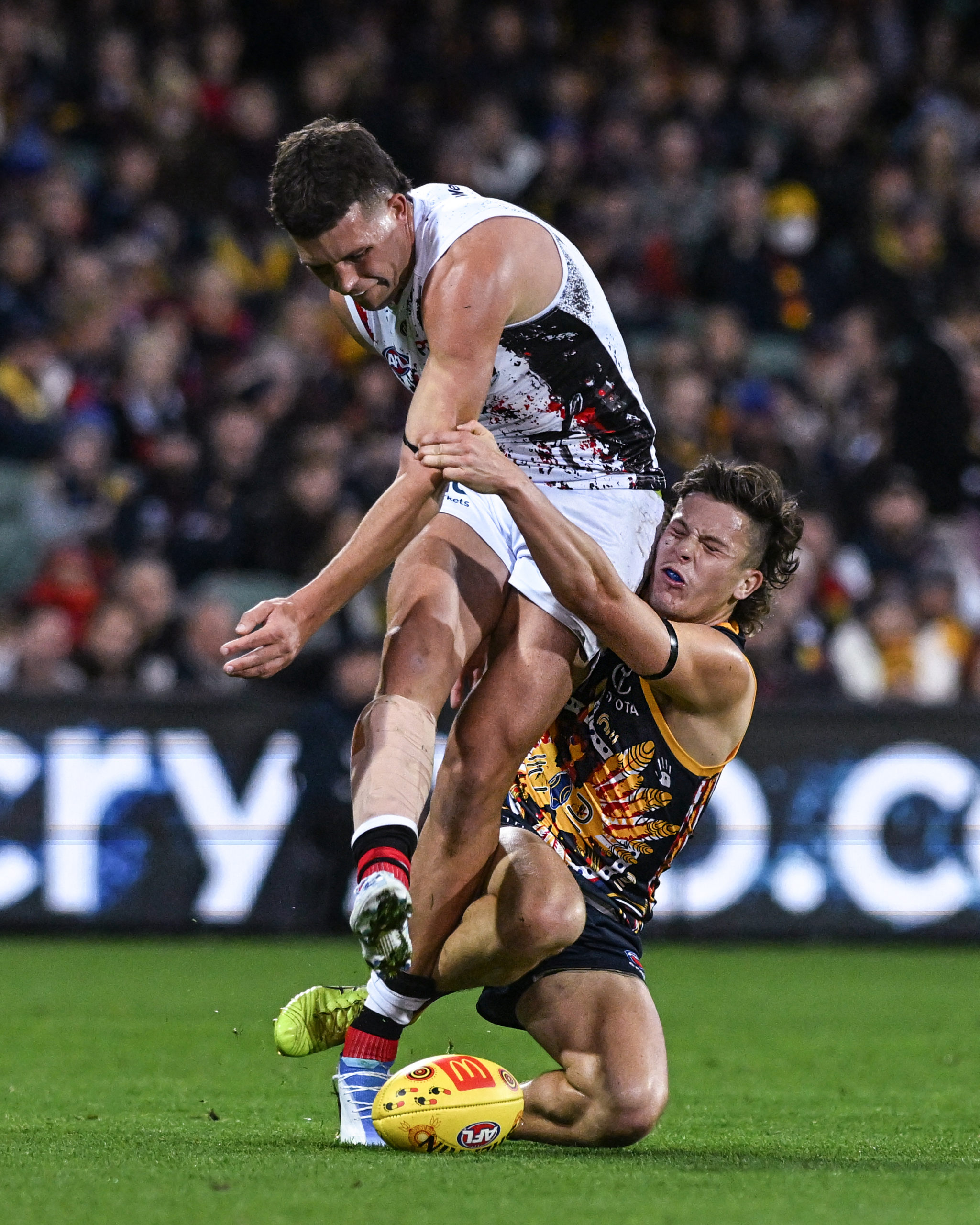 To mark the scheduling clash with the federal poll, Soligo performed his impression of Scott Morrison on a soccer pitch. Photo: Michael Errey / InDaily

Only one of those players has yet cracked more than 21 games – McHenry the veteran on 38.

Indeed, after Sloane, Walker, Smith, Laird, Brown, Crouch and Seedsman, the most experienced players on the list are Keays (76 games, lately delisted by Brisbane) and Dawson (74, traded in from Sydney).

Those two teams, incidentally have at least twice the number of players who’ve played more than 70-odd games.

We now have fewer wins to this point of the season than we had last year – leading to the inevitable conclusion that our rebuild is actually more of a deconstruction.

To continue the election theme, we’re starting to fear that some players might turn out like Steven Marshall’s chauffeured car after the state poll, and never arrive.

That election defeat, of course, was predicated in part on the preceding COVID chaos, which in itself might not have been the outgoing government’s death knell – but for the fact that SA had spent the preceding two years rigidly adhering to COVID protocols, even when we were effectively COVID-free.

In a similar fashion, I suspect the current frustration with the team’s direction is born not merely of the past two or three years of bottoming out, but from the fact that we spent the preceding two decades at or about the mark, without a single flag to show for it. 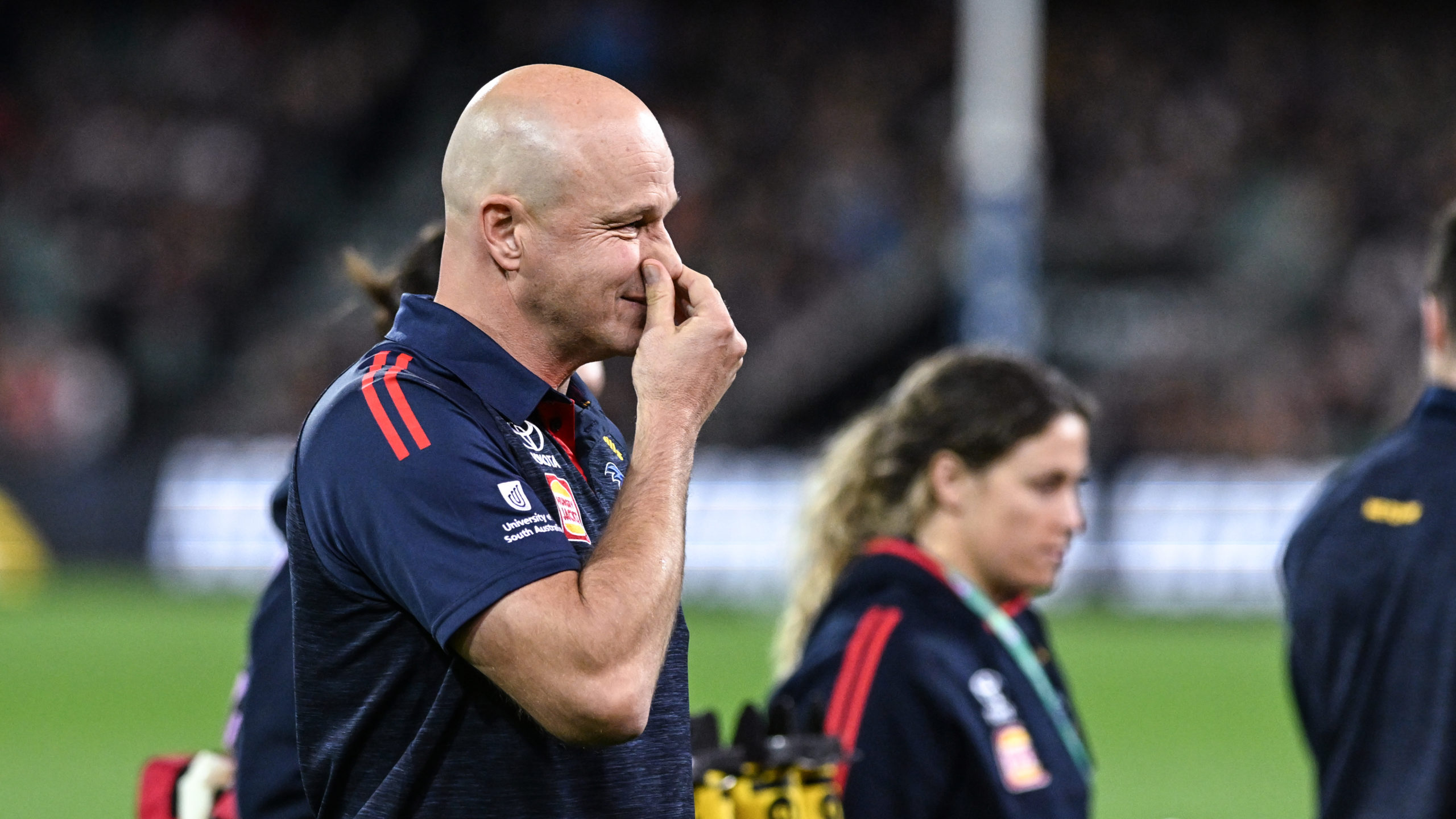 Matthew Nicks tells his players what he thinks of their goal-kicking. Photo: Michael Errey / InDaily

Frankly, I’d be a lot happier being, say, a West Coast supporter right now and watching my team getting flogged by 10 to 20 goals a game, but knowing that they at least managed to capitalise at least once on every period of on-field excellence in their briefish history.

Instead, the Crows effectively almost scaled Mt Everest, only to theatrically announce near the summit: ‘Actually, no, we gave it a good shot but we’re going to go back down to base camp to start all over again, except with smaller players.’

Still, losses are character building, or so they say.

So the good news is, by the time we’re regularly winning games again (whenever that may be), we’ll have character coming out of our earholes.

And speaking of good news, while the nation was diverted by an influx of climate-conscious independents, at least one teal contender had a bad day – with Port suffering a strong swing against in its third quarter at Kardinia Park, going on to lose by 35 on a two-party basis.

Still, a homeground romp against the Bombers should keep any looming spill motions at bay, while we at least have West Coast and the Kangaroos on the distant horizon – on current form, we should win both (although we’ll almost certainly blow at least one of them according to Rule 1a of the Adelaide Football Club constitution, in which the players are duty bound to get complacent the minute their supporters get vaguely hopeful).

And, sure, that would be good (the first bit, not the second part).

But at this point, what would be really bloody helpful is… well, exactly what we saw this week from the Hawks in Tasmania.

Indeed, exactly what we nearly got – but not quite – from the Crows against St Kilda.

Namely: a rebuilding team that few had given hope of any significant success this season clicking into gear to defeat a genuine top four contender.

Just like we did last year against the Cats and the Dees, and as we glimpsed this season against Port, Richmond and the Dogs.

I’m not saying we’ll see something similar against the Cats in Geelong (in fact, we’ll more likely lose by 119 points, or thereabouts).

Their success isn’t (necessarily) measured by winning more games at a certain point of a season than you’d won at the equivalent point the previous year.

Look at Melbourne: no finals for 12 years, then break through in 2018 only to drop back to 17th the following season.

Or Richmond: a trio of comical finals exits only to crash to 13th in 2016 (I forget what happened after that).

So the fact that the Crows don’t currently appear capable of winning games may not mean they’re poorly coached, or that they’ve recruited the wrong guys, or have utterly failed in their much-vaunted rebuild.

Personally, I least expect it this weekend.