Still, while it could be said (this week, certainly) that it’s apt Adelaide has secured a sponsor in a field that reflects their perpetual ability to generate hype without a subsequent payoff, it’s also appropriate for another reason.

Because like the crypto craze, the Crows still manage to inspire deep-seated belief that everything is building to something big – we just can’t work out when or how. 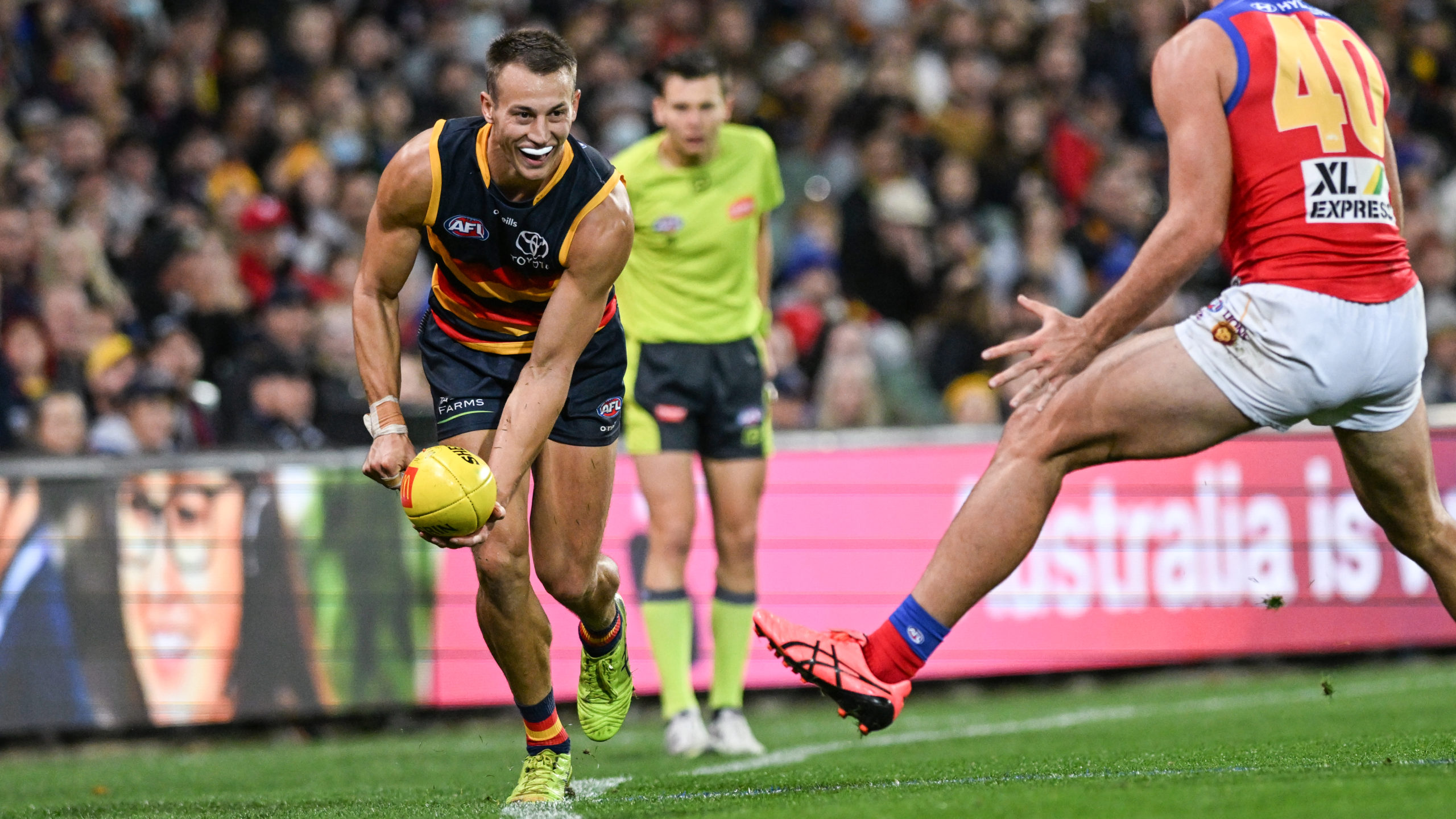 One of the many times on the weekend that the boundary line became redundant. Photo: Michael Errey / InDaily

Still, it’s worth reflecting on the recent travails of our triumphant opposition.

There was a time, many years ago now, that the Lions were my undisputed ‘second team’.

It coincided, to be fair, with them winning a bunch of flags, so it was a happily timed arrangement – but not entirely illogical either.

I had, for instance, grown up in Brisbane for a few years there, and at the time of their breakthrough 2001 premiership win was living in Fitzroy – which seemed a confluence of fate significant enough to celebrate their Grand Final win as if ‘twere my own for a good week or so there.

If only to exacerbate the suffering of the local Essendon supporters, at least.

Amusing to note that they haven’t won a flag since.

Though less so to note that neither have we.

Anyway, the whole ‘Lions as second team’ thing didn’t really catch on; there was something about that decade in which they finished bottom-four almost every year – not to mention playing finals just once between 2004 and 2019 – that made me forget those deep Brisbane roots.

Not to mention, there was the whole Charlie Cameron business.

Unfortunately, the law states that once a player you didn’t want to leave goes to another club, you are duty-bound to wish failure upon said club in all circumstances except when they are playing 1) Port Adelaide, 2) a team that has beaten us in a Grand Final or 3) any other club that has recruited an Adelaide player of equal or greater competence than the original player in question, or has otherwise beaten us badly or maligned us in any real or perceived way.

I don’t make the rules. 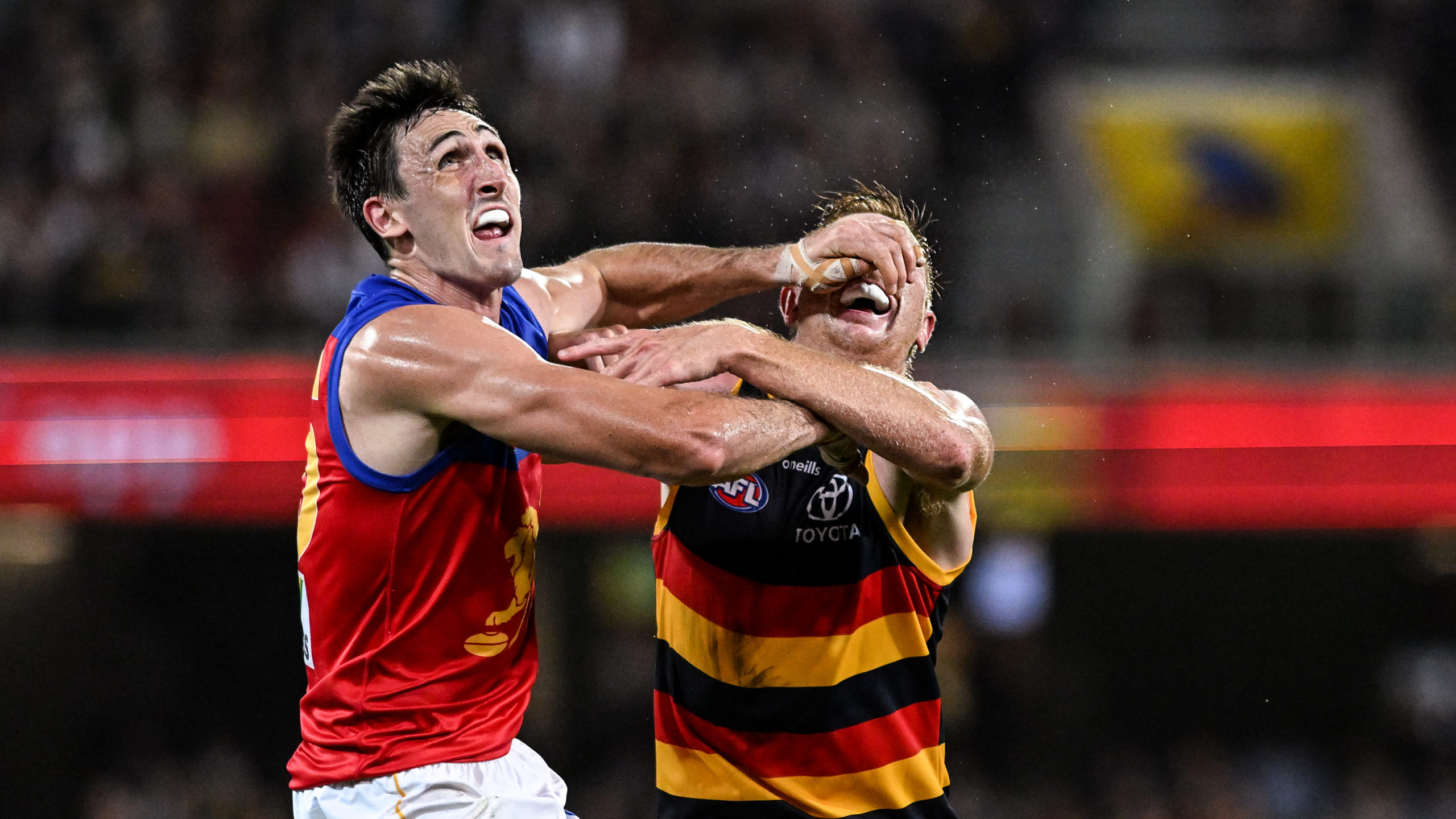 The Lions went six goals up in the blink of an eye. Photo: Michael Errey / InDaily

So in other words, there was not a lot to celebrate from Adelaide’s latest capitulation to Brisbane at home on Saturday.

In fact (and I hate to be that guy) even my Punters’ Club multi coming in at $9.50 on Charlie to kick the most goals, Lachie Neale to garner the most possessions and Brisbane to win the game was cold comfort, really – only serving to remind me that we let Charlie go, didn’t get round to drafting Neale and that, in general terms, Brisbane are good and we are not.

Indeed, I’m not convinced making financial hay from your team’s misfortunes is ever much of a consolation.

Consider this: if someone were to hand you any amount of money you could name on the proviso that your team would never again win a flag in your lifetime, what would it be worth to you?

You could live in the lap of luxury for the rest of your days – with the only downside of knowing, categorically, that you would never again celebrate a premiership victory.

I guess you could just resign yourself to spending all your cash on things other than Australian football, to which – after all – the vast majority of the world’s population is entirely indifferent.

After all, I spent a good deal of my childhood (including the bit in Brisbane) not caring a jot about football, and it was really quite fine (far less frustrating, to be honest, than the subsequent decades as a fully-invested supporter have been). 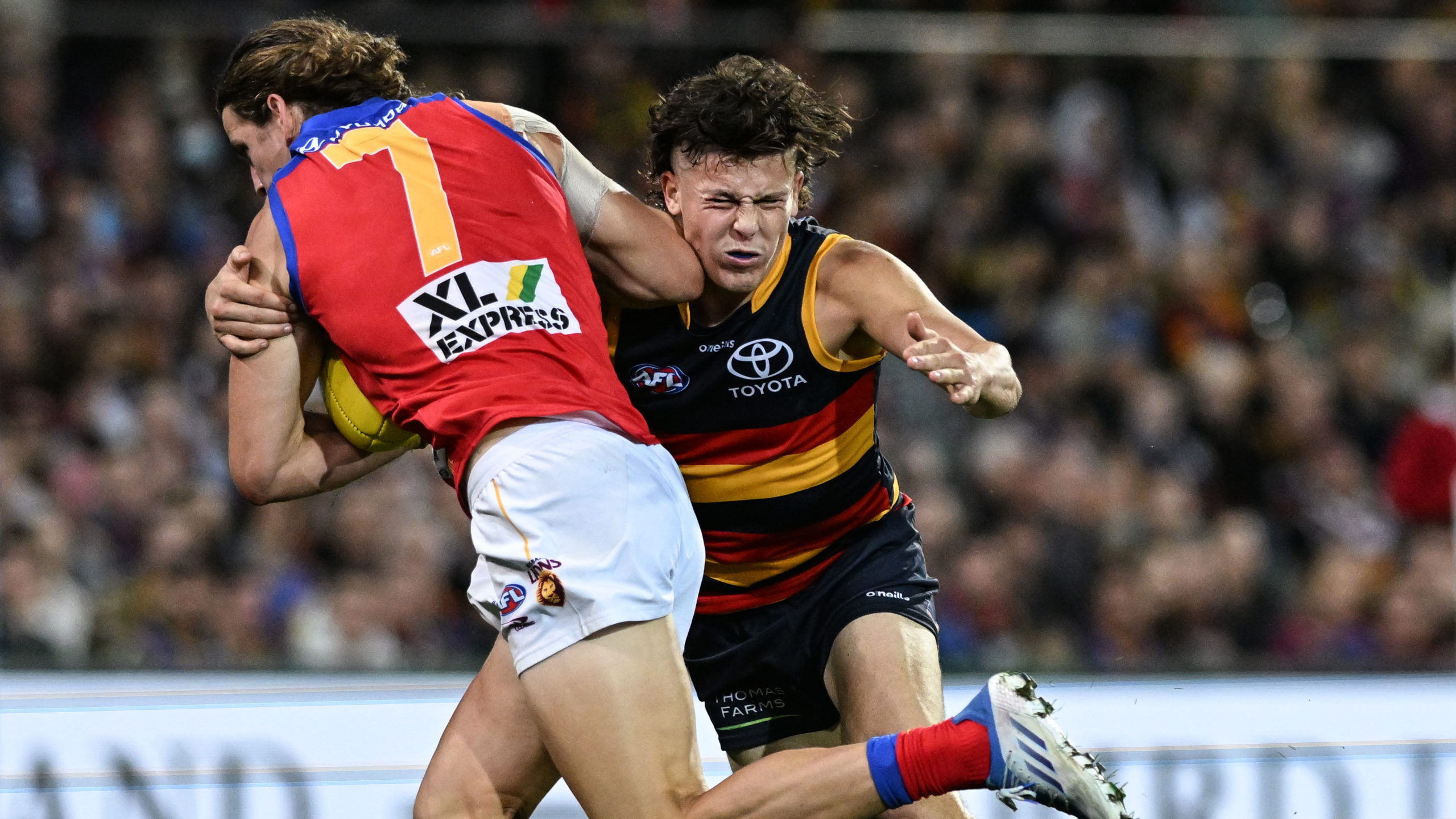 But there would be something fundamentally sad – despairingly so – to live out your days without even the remotest prospect of hope that your team will ever again taste the ultimate success.

And I suspect that’s a hope that you can’t really put a price on.

I’ve noticed the response from plenty of Crows supporters to Saturday’s third-term capitulation has seemed far more frustrated than after the previous week’s against Carlton, or even the week before that’s horror-show against GWS (my latter-day second team).

At least, however, we didn’t have to feel guilty about Leon Cameron losing his job last week.

We did all we could for him.

And anyway, he was merely following the ‘coach resigning after team falls in a hole following heavy Grand Final loss to Richmond’ timeline set by Don Pyke.

Chris Scott still has about a year up his sleeve, though his players have thus far stubbornly refused to do their bit by losing consistently.

Nonetheless, I live in hope.

While there now seems to be a broad acceptance that the Adelaide Football Club has embarked upon a full-scale rebuild, there also appears a presumption that a rebuild is over as soon as your team gets one or two solid wins, and that every loss thereafter is a sign that the whole thing’s failed.

Don’t get me wrong, it may well.

But surely you can’t gut your playing list in favour of speculative draft picks and expect them to match it with the second-placed side in the league for four quarters.

After all, this has been a work-in-progress for two-and-a-bit years now. Compare that to Brisbane’s timeline, or Melbourne’s, or Carlton’s.

Not that I’m going to be so philosophical if we’re still this bad in 2032 – but, for a while at least, it’s probably advisable to think differently about this team’s performances.

Not to lament, as we historically might, a second successive third-term capitulation (we’ve now lost the past two third quarters we’ve played 12 goals to one, not that anyone’s counting).

Nor to cringe at the turnovers, and spilt marks, and goals gifted to the opposition by directly passing them the ball while trying to chip it around in defence.

(And yes, I’m aware that there has been some consternation around certain umpiring decisions in Saturday’s game, on which point I will say this much: I resolved long ago to never publicly blame umpiring decisions for my team’s incompetence, and I’m trying extremely hard to maintain that resolution.)

So no, while it’s counterintuitive, we shouldn’t dwell on what went wrong.

For a while yet, let’s not continue to ponder the eternal questions, such as whether our early draft picks in 2018 were squandered, let alone our very early pick in ’19, or whether Himmelberg will ever do more than tease the prospect of consistent form, or whether Fog (our recompense for Charlie’s defection, lest we forget) will ever quite arrive as we hope he will.

But instead, let’s focus on the fact that – for a brief gusting moment of optimism – we halted the second-placed side’s momentum, and clawed into the lead.

We could focus on the fact that Soligo, in his second full match, had some poised moments, or that Hately had his best game in the AFL, or that if tackling was goal-kicking, Berry would one day win the Coleman (it’s not, and he won’t, but nonetheless).

Or even on the fact that while those early wins against decent opposition weren’t a sign that we’ve arrived, they can at least attest that we’re on the right track; and that if they hadn’t happened, our current stretch of incompetence would be far harder to abide (though, granted, another ‘out of nowhere’ win against a decent opponent would be handy at some point soon).

And then, of course, there’s the prospect of other things to come, such as the delirious pipe-dreams spawned by the league’s number one draft pick putting his contract extension negotiations with the flailing North Melbourne on hold.

Not that he played on the weekend, but I’m hoping the Power’s fourth win on the trot on Saturday strengthened Horne-Francis on the need for him to leave North, whilst simultaneously giving him a residual resentment of Port Adelaide.

And yes, I’m aware that probably won’t be the case, but that’s not really the point is it?

The point is, at the moment all we have are patience and hope.

The first is routinely tested and the latter is regularly dashed, and while we’ll continue to crash like a crypto currency as we build slowly towards something better, the belief that we might actually get there someday is something you just can’t put a price on.

Because for now, it’s all we’ve got.