In our last missive from Fumbleland, some two weeks ago now, I insisted that the Power were a shoo-in for a Grand Final berth, and a lock for this year’s flag.

Sure, my reasoning may not have been particularly analytical: broadly, 2021 sucks, so a Port premiership would be generally on brand.

But in hindsight, maybe I was overstating things when I mentioned that, and I quote, Port “simply can’t lose”.

Perhaps I spoke in haste when I claimed they would “easily account for [either] Brisbane or the Bulldogs before overpowering a bubble-weary Melbourne, with Todd Marshall having a breakout game in the forward line a la Tom Hawkins in 2011, and Wines winning the Norm Smith from Aliir”.

Not that I’m complaining, of course.

But it’s become apparent to me, what with one thing and another, that the Power lads may have been reading a bit of their own press of late, and taking it as gospel.

Now, I’m no Robinson Crusoe here; most of the AFL-following world expected Port to not merely beat the Bulldogs, but basically obliterate them.

After all, as we were constantly reminded – not least by Ken Hinkley himself – their build-up could not have been more perfect.

They didn’t leave Adelaide for the entire finals series, won a convincing win against a fellow top-four side to open their campaign, slept in their own beds, didn’t have to bother with quarantine, flights etc, had almost a full and healthy list to choose from and looked to be in season-best form.

The Dogs, by contrast, had dropped their final three games to lose the double chance, were banged-up with their skipper in doubt and their key defender out (I read that he’d “succumbed to a hamstring injury”, which fortunately, if surprisingly, didn’t actually mean he’d died, merely that he couldn’t play for a week or two). They’d travelled from pillar to post, taking in four states in two weeks, had barely left hotel quarantine and didn’t get a chance to train on Adelaide Oval before the big game. 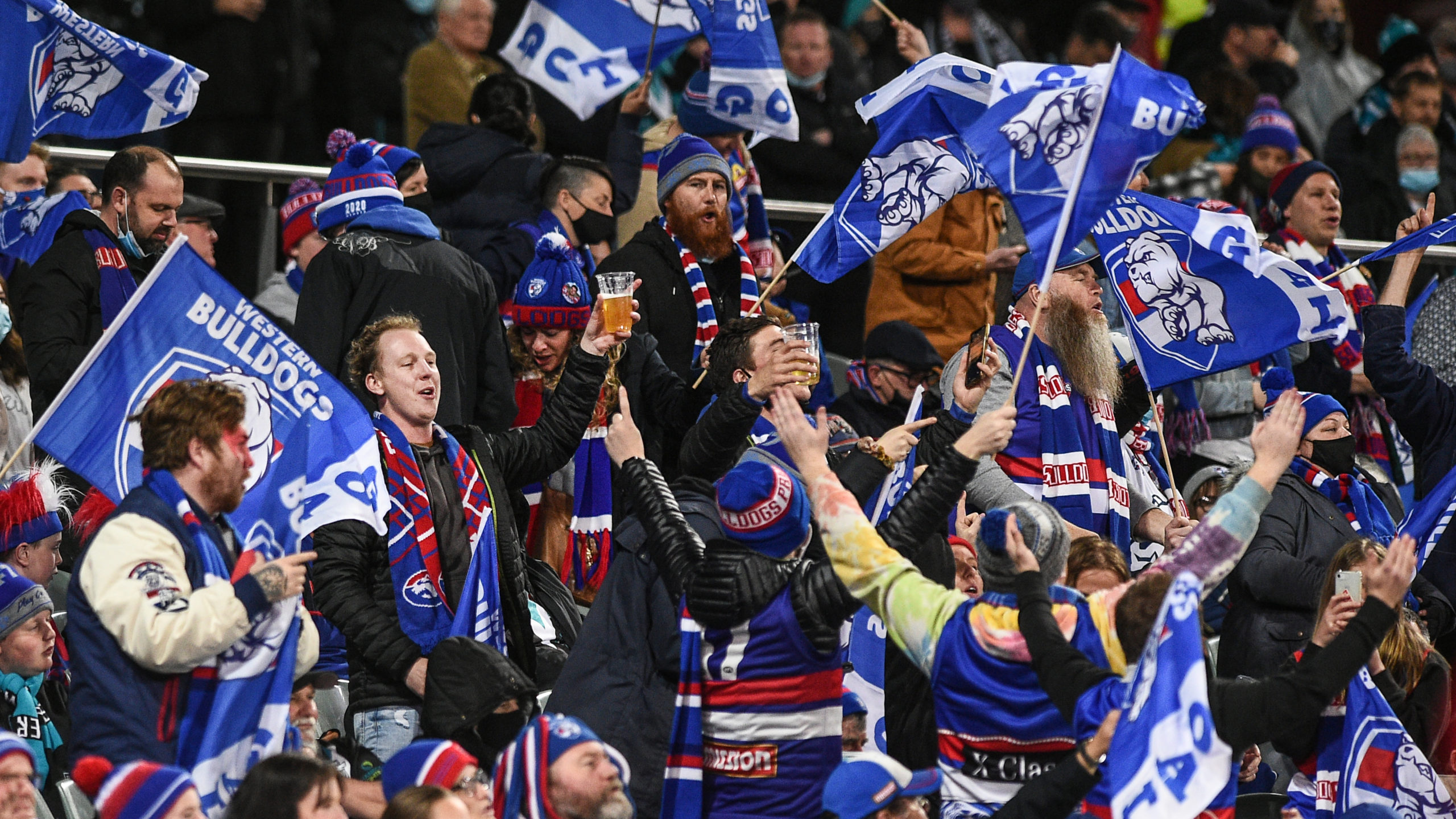 Oh, and they also had literally no visiting supporters from locked-down Melbourne. Photo: Michael Errey / InDaily

And then, to really rub their faces in it, the local paper basically called them turds in a front-page typo by way of a friendly ‘Welcome to SA’. 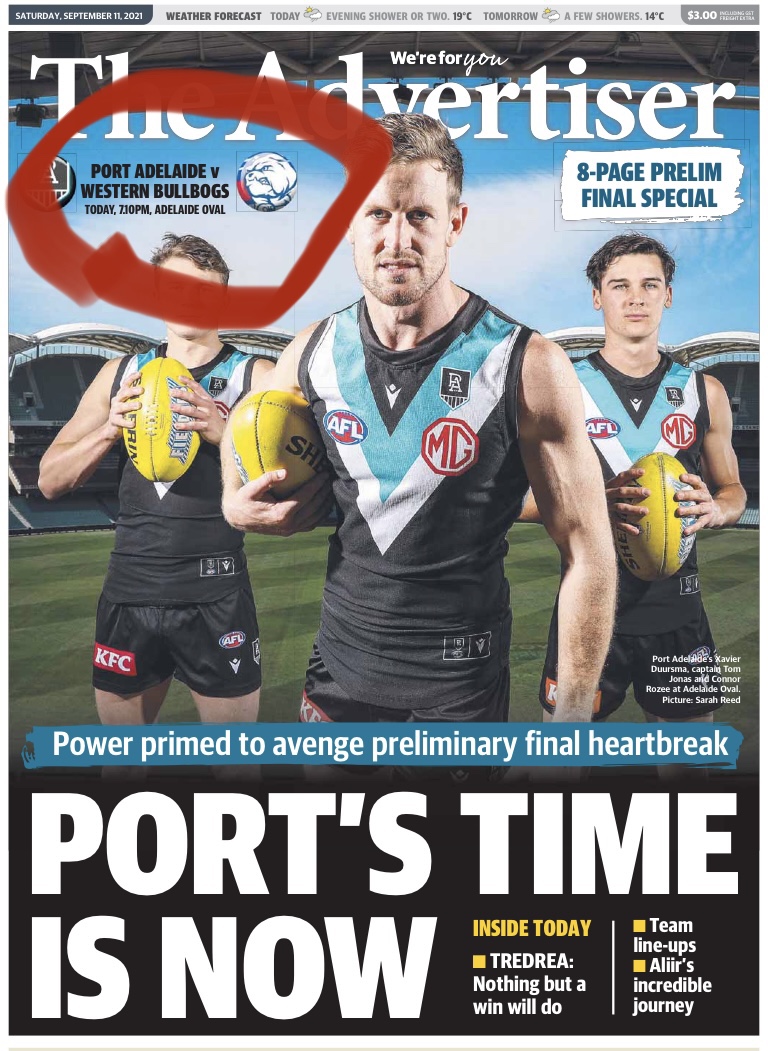 Anyway, I’m not suggesting anyone at Port read my humble Fumbleland prognostication and decided it was ‘game over’, but it’s clear that only one side turned up to play on Saturday night – while the other turned up for, essentially, its home Grand Final Parade.

One side turned up as a battle-hardened team, while the other had spent the past two weeks at home patting themselves on the back and publicly musing about how ready they are. 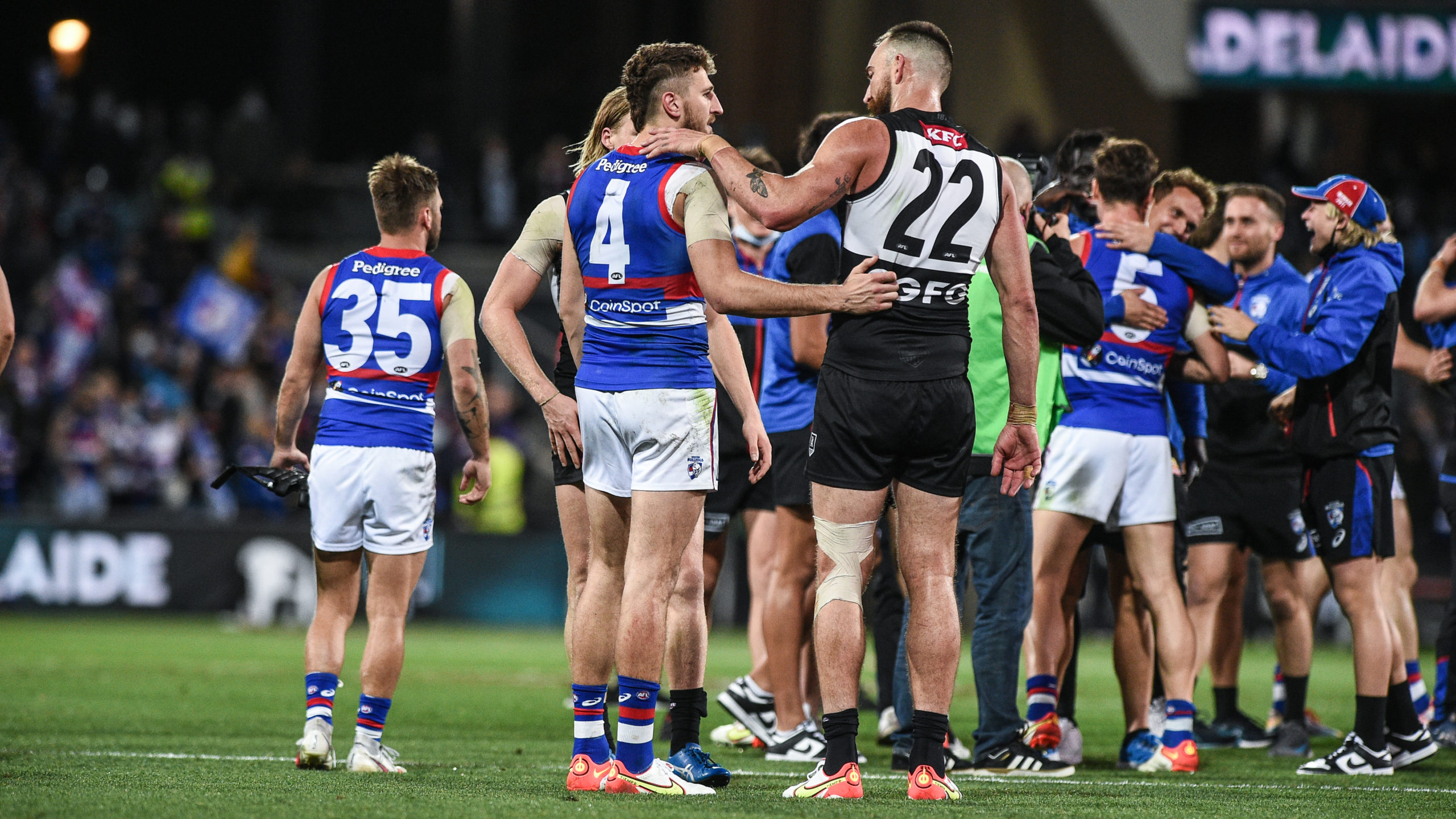 Narrator: “They were not.” Photo: Michael Errey / InDaily

Honestly, there was more talk in recent days about the Grand Final and its aftermath than there was about the preliminary final, which appeared to be just a minor inconvenience (or, worse, a farewell home game) before the real thing.

So if my breathless endorsement of their premiership acumen somehow threaded its way into this cacophony of hyperbolic hot air that appears to have so inflated the Power’s collective psyche, my most humble apologies.

Still, as I say, I was hardly the only one.

Best I could tell, Port supporters spent the previous week enveloped in a smug sense of superiority while busily scouting transport and accommodation options to Perth.

Luckily for me, my own team didn’t get anywhere near playing finals so I didn’t have to stress about things such as not getting tickets or paying through the nose for flights.

Although at least Kochie won’t have to sulk about failing to get a guernsey to WA any more.

A shame, really, since I’d worked out a cunning plan to smuggle him in there if necessary:

Even coach Ken Hinkley was almost lackadaisical in his public appearances, agreeing Port’s preparation couldn’t have been better, declaring the proverbial “boys” were “ready to play” and claiming vindication for the team’s mid-season average-ness.

“I said 10 or 12 weeks ago – wait until the end of the year; wait and judge us… when we can get all our people who we need in the team playing well together,” he chided.

Mind you, when they eventually went down by 71 points at home, he decided it was too early to judge the performance, insisting “tonight’s not the right night to be reflecting on the result too much”.

In the event, of course, they’re now the first team to lose back-to-back home preliminary finals since the Western Bulldogs in 1997 and 1998.

Which, as you can imagine, is particularly amusing given Crows supporters were the beneficiaries on all four occasions.

But to all Port supporters, take heart – and put on a brave face.

It is, after all, only a game.

Meanwhile, all Adelaide supporters can carry on like this for a while:

Of course, in hindsight, Port were never going to win. They were cursed from the outset – and we should have seen it coming.

The match, after all, was played on the 11th of September.

Or, as it’s otherwise noted:

Still, if we didn’t see the result coming, it was almost too good to believe – even as it happened.

When the ‘BullBogs’ skipped out to a five-goal lead within minutes of the first bounce, it was clear the visitors were on.

But still, I wasn’t initially nonplussed. The opposite in fact – plussed, I guess…?

After all, much the same thing happened against Port in the final round of the home and away season a few weeks back, and we all know how that ended.

Even with the margin at 58 points by the long break – a higher half time margin, incidentally, than 2007’s famous 119-point loss to the Cats (which, of course, still remains Port’s most recent Grand Final appearance) – I wasn’t entirely convinced.

After all, as Oscar Wilde used to say, to lose one home prelim final may be regarded as a misfortune, to lose two – looks like carelessness. 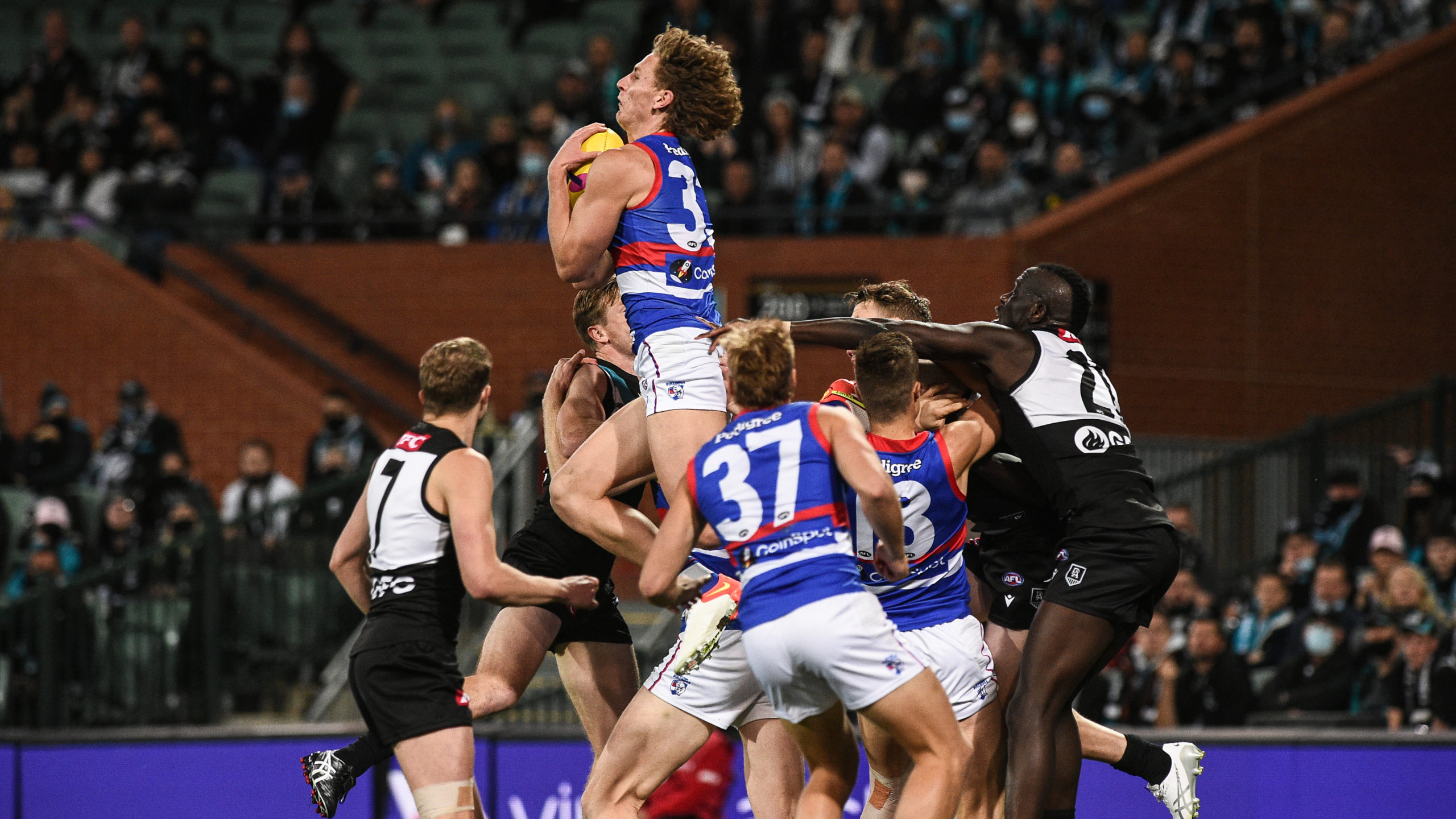 Now, there may be some of you reading this (Port supporters presumably, in which case you’re clearly some kind of masochist anyway) who are saying, ‘Hang on, Fumbles; didn’t the team you support finish 15th on the ladder after a wooden spoon the year before, while Port is a top four side?’

Which is a fair and reasonable observation but, you see, schadenfreude is neither fair nor reasonable.

And this is not a new revelation.

As I wrote some six years ago: “Of course, there would be no need for such schadenfreude if one supported a team that was sufficiently competent that one could simply celebrate its various successes, rather than take disproportionate joy in the failures of others… but one doesn’t, does one?”

Which, in hindsight, succinctly sums up much of this column’s subsequent output.

And, indeed, it has been a typically lacklustre post-season for the Crows thus far.

The absolutely 100 per cent rock solid appointment of Neil Balme turned out to be a furphy, with the Tigers mentor rather condescendingly declaring that while he appreciated the Crows “reaching out for a conversation… Richmond is where my heart is and I look forward to continuing to help strengthen the club into the future”.

If only we had some… balme?

But fear not – for the Crows’ off-field recruiting drive is now turning to Plan B: 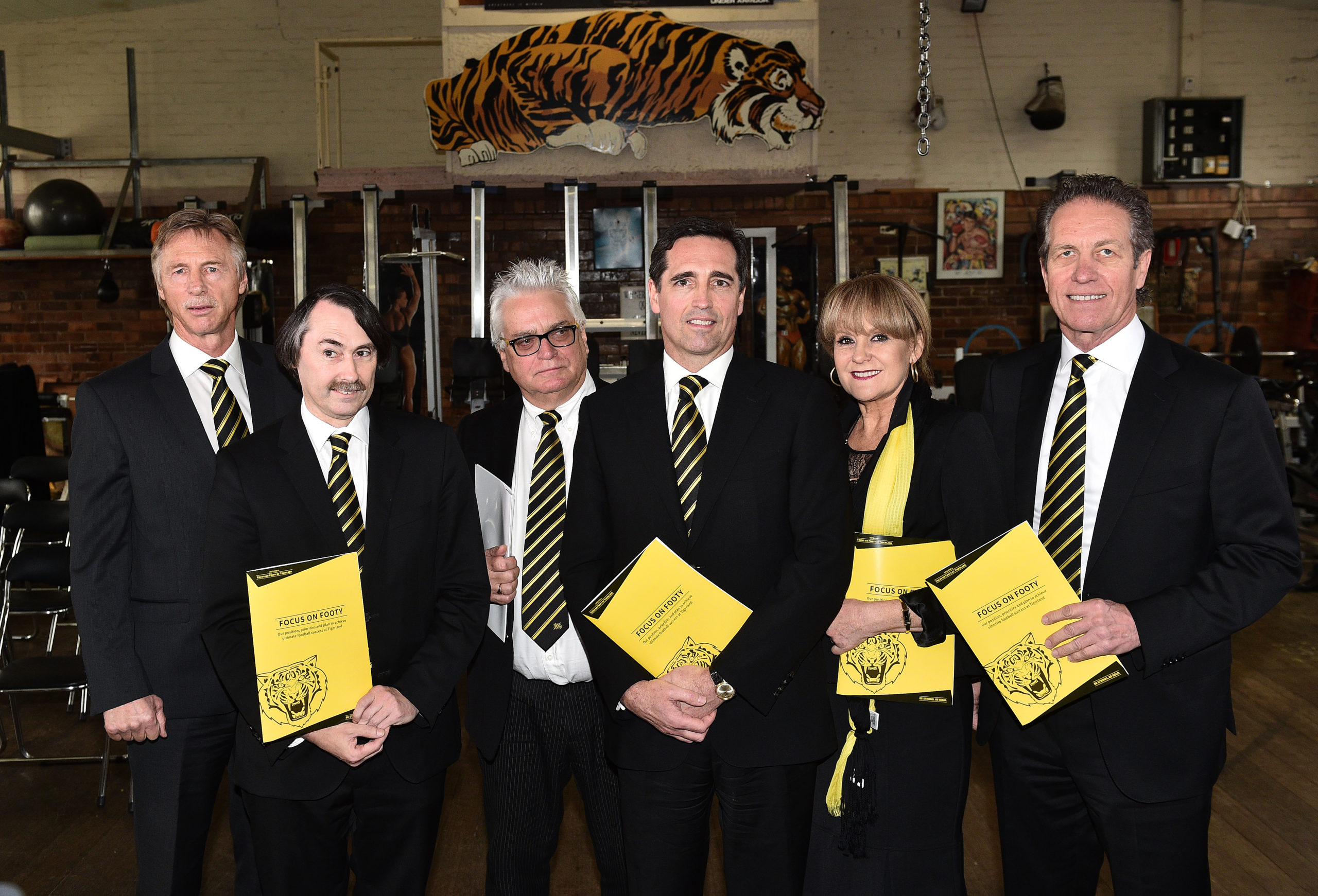 Plan B: These guys.

Still, I do look forward to one day reading about Adelaide possibly appointing someone, and then actually appointing them.

Like Sydney defender-wingman Jordan Dawson, for instance, who’s been linked to the Crows all year but now that he’s finally announced he wants out looks set to choose Port instead, as he weighs up a difficult choice between the SA-based clubs:

And no, I’m not quite sure which club is which in that analogy, in case you’re wondering.

Regardless, it was certainly a good weekend for schadenfreude, with Paddy Dangerfield’s Cats predictably falling at another penultimate hurdle. 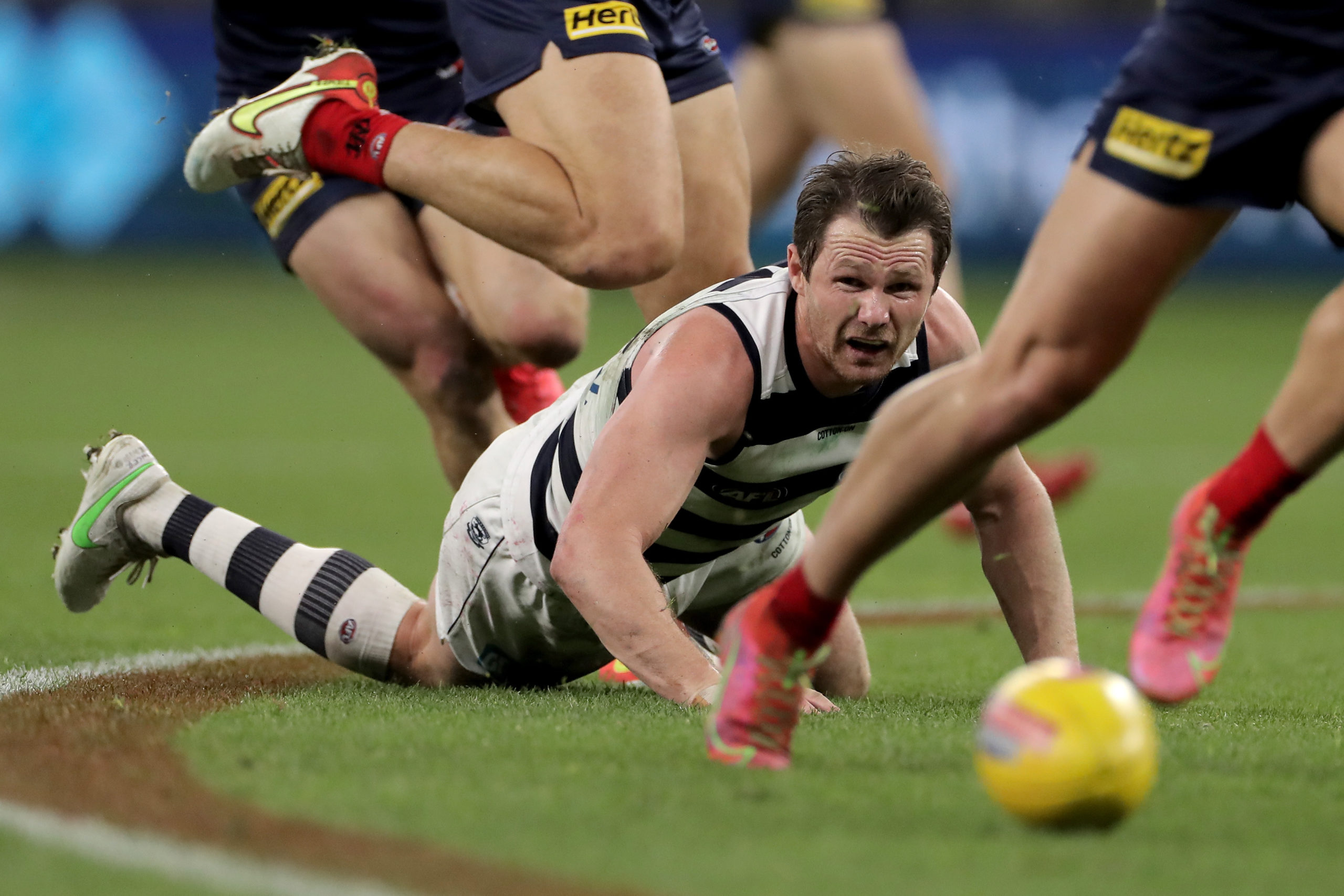 Given the looming Sophie’s Choice of having to back Paddy against the Power, the Dees’ big win was positively Dee-lightful, infused with the delicious irony of Selwood not getting a legitimate free kick for a high tackle at the precise moment he really could have used one.

I know I say this every year, but surely this is it for Geelong’s premiership window now?

Especially since some of their players must clearly be contractually obliged not to turn up in September. 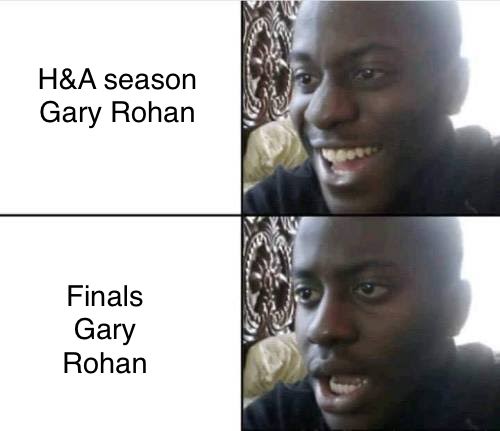 Mind you, it just happened to leak out after the match that several players had been struck down with a mystery virus in the days leading up to it, which of course vindicates Rohan’s one-touch performance before he was subbed off late.

Or at least, it would if he’d been one of the players cited as unwell.

Anyway, bad luck for Geelong – rotten timing for a third of the side to be hit by a mystery illness.

And it’s clearly highly contagious: I’m convinced the ‘crap football virus’ – or COVID-119, as I’ve chosen to dub it – was passed on to several Adelaide players by their Cat counterparts during the Preliminary Final of 2017.

And, of course, it obviously infected the Port Adelaide camp during the course of this year’s Qualifying Final. 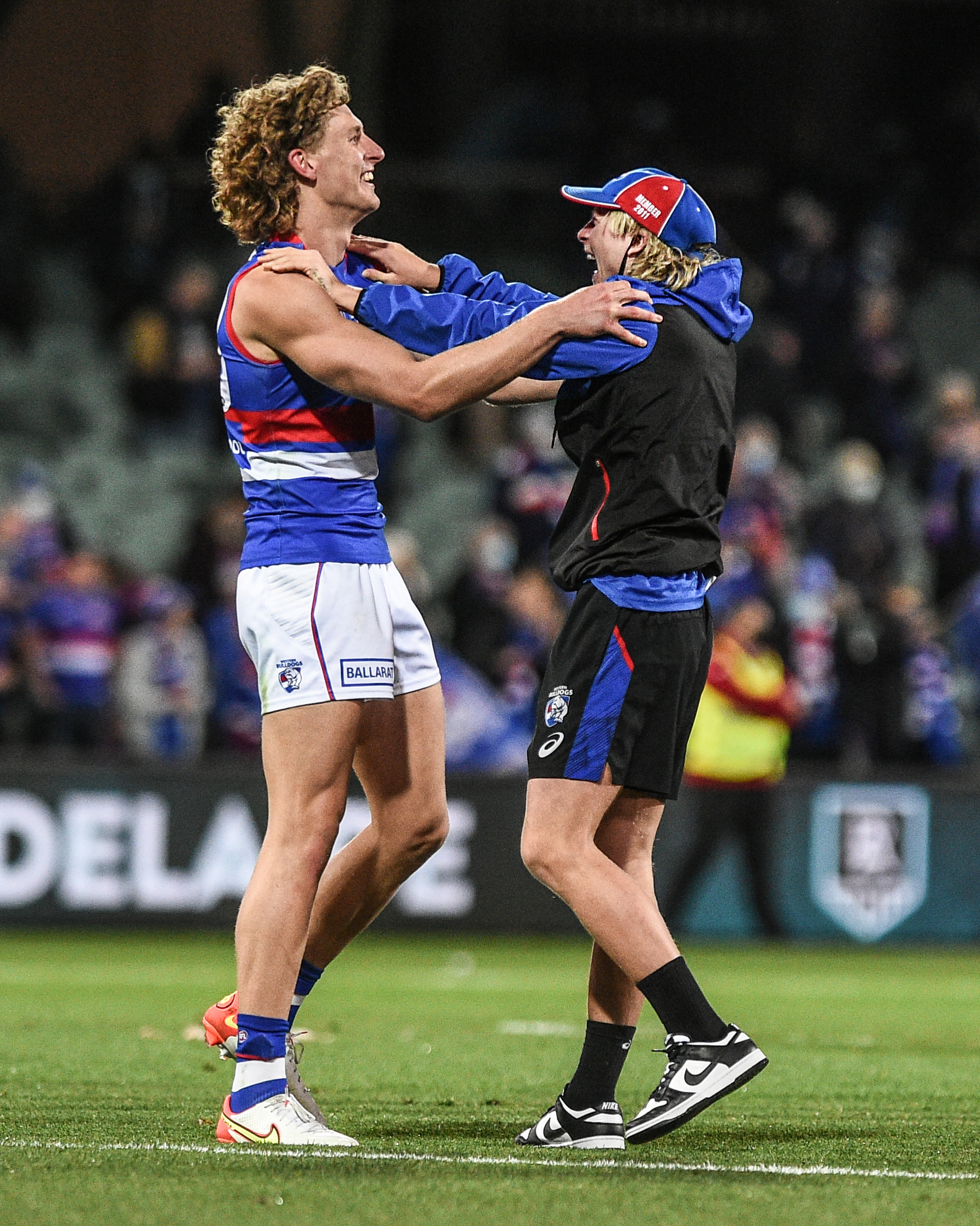 Beyond that, the omens were there early on.

Even when the Power faithful drawled along to the club’s appropriated INXS anthem, Never Tear Us Apart, the soundtrack appeared to be playing two separate recordings of the song, slightly out of sync.

Thus, a song whose subject matter, as its title suggests, is about never being torn apart, was quite literally rent asunder.

After which the Bulldogs did in fact tear Port apart. Figuratively, at least.

Still, at least NewsCorp can continue a tradition made famous by The Sun, and declare: ‘It was the BullBogs wot won it!’

For me then, it was just a matter of settling down to listen to an unending stream of Port Adelaide talkback callers.

And revelling in the afterglow of the result for the remainder of the weekend/month/year/my natural life.

But we should not take things for granted.

The might of schadenfreude has held back the forces of ‘sour grapes’ for yet another year, with the worst that can be said about the Grand Final now that either Jake Lever or Alex Keath will win a premiership.

But given what the alternative could have been, I’ll take that in the true beat of a red-and-blue Melbourne heart.

Which means I can now sign off from Fumbleland for 2021.

Doubtless there’ll be more frustration next year – but we’ll always have our schadenfreude as consolation.