Still, if there’s a more enjoyable way to completely ruin your draft hand, I can’t think of it.

The Crows’ win saw their No.2 draft pick slip to 4th spot, which will be more like No.6 once father/sons are allocated.

Which, to be frank, hardly seems worth the trouble of being so bad for so much of the season. 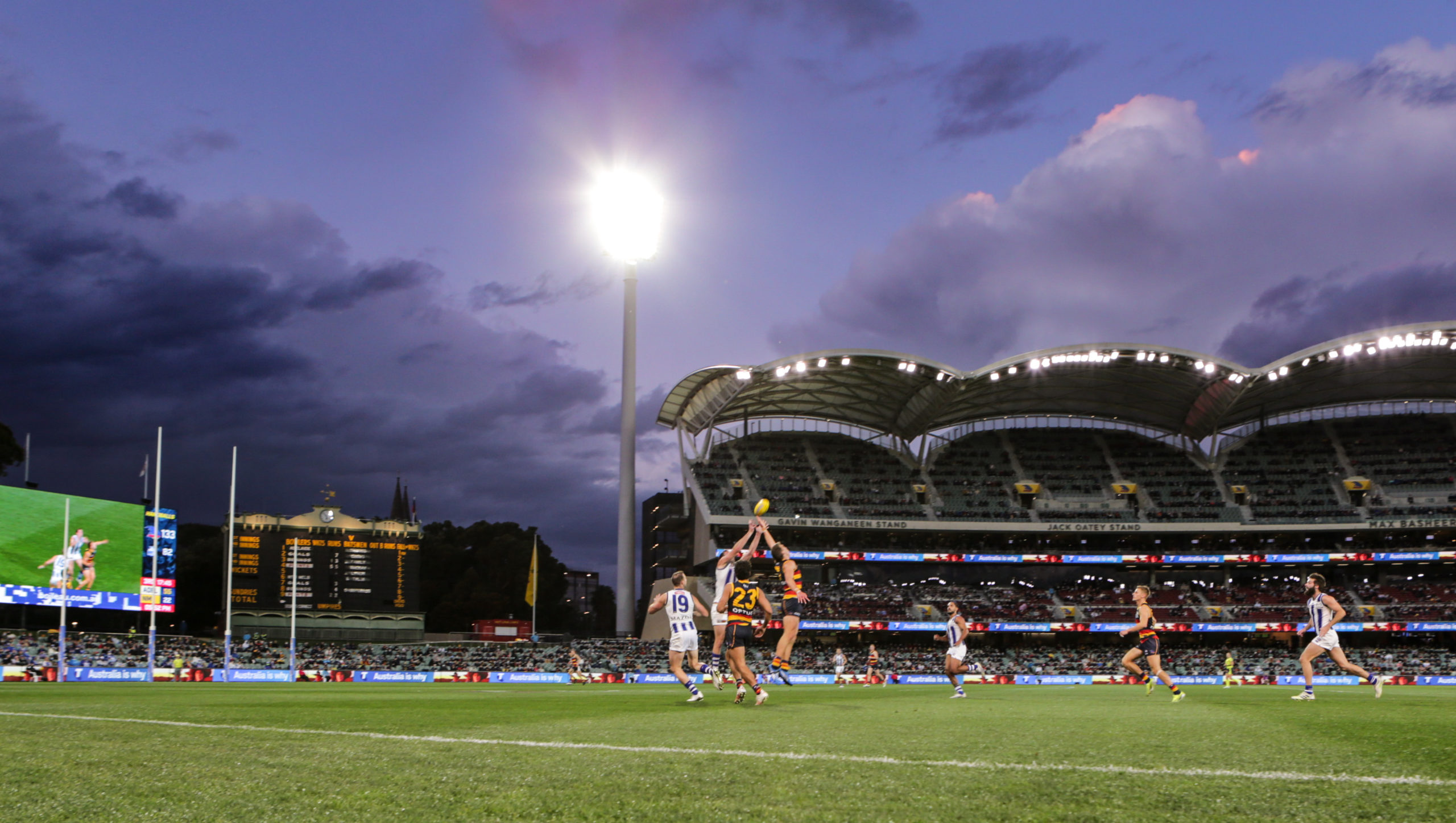 Still, it was a dominant display over the Kangaroos, and we should have won by plenty more, but for extremely errant goalkicking – no doubt a deliberate and subtle nod to North’s own performance in the ’98 Grand Final.

But it was heartening to end the season on a high, and there are certainly few highs to compare to the dizzying thrill of beating the lowest-ranked team in the competition on your home deck in a dead-rubber game in the graveyard fixture in a near-empty stadium.

Ok, it may not have been quite the objective highlight of the weekend: two last-gasp finishes in top-four shaping primetime clashes, a dramatic draw to farewell a glut of multi-premiership players and the most successful coach of the modern era, a percentage-chasing nailbiter in Brisbane and a scare for the finals-bound Giants might just pip us at the post, along with every other match played across the round.

But nonetheless, there was a lot to like, and the final quarter had all the feels, as the kids say these days.

Goals to Lynch and Mackay in their last hurrah tugged at the heartstrings, and between them came a hard-earned six-pointer from debutant forward Lachie Gollant.

The 2019 draftee was celebrated in the off-season for adding 13 kilograms to his frame in as many months (although, frankly, I can’t see the big deal – I did exactly the same thing last year, and all I copped was criticism).

But there was something of the symbolic changing of the guard about it all.

There was a sense of inevitability about D-Mac’s confirmed retirement this week, as seismic as it was for those of us whose stock in trade is football-related banter.

In the event, he played a blinder, setting up attacking forays while still proving himself the ultimate team man, missing a running shot at an open goal in the first term in a clear, but vain, bid to keep our No.2 draft option alive.

Selfless till the very end.

It was reported that the Crows had tabled an offer for him to play one more year and, frankly, it would have been worth it just for the reaction of some of his more vocal social media critics after the club pushed Lynch and Talia out the door.

My only disappointment was that he didn’t give his farewell media conference the old ‘Richard Nixon’ treatment:

Still, D-Mac has enjoyed an Indian Summer as a 30-plus-year-old footballer, and is the epitome of the Adelaide Football Club: at times joyous, at times comically capricious and once in a while frustrating – but ultimately endearing. 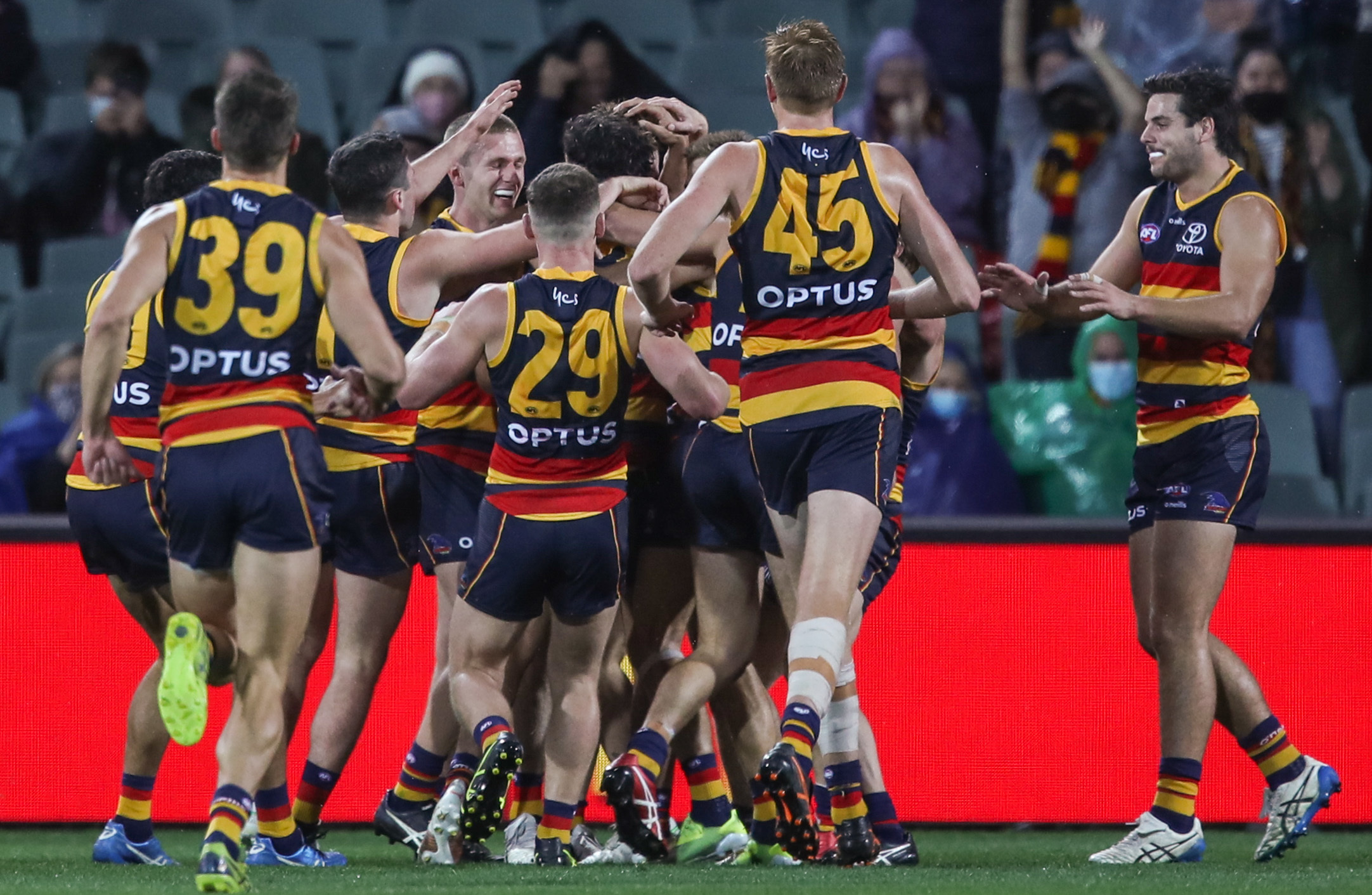 After everything this year, it was probably as enjoyable a final round dead-rubber to farewell a failed season as the equivalent fixture in 2014, when we thumped St Kilda on a sunny August afternoon in a rout that saw a retiring Ben Rutten kick his ninth and final career goal.

Talking of kicking goals, Port probably need to do a bit more of that in its first halves: in two of their last three games they’ve gone into halftime with a solitary major on the board.

Mind you, in the other game, they kicked 19 goals in two and half quarters, so they’re an odd proposition for the looming finals series.

And really, with the form they’re in, they should now be the legitimate premiership favourite.

After all, they’ve got two home finals now, as SA becomes a major-round AFL hub for visiting sides who will undoubtedly be greeted with the warm welcome our state gives all arriving travellers in these COVID times:

So let’s just call it here: anything less than a flag for Port will be, objectively, a catastrophic failure. And a flag will be a pass mark. Just.

Though, let’s face it, if Port has to win another premiership one day in our collective lifetimes, we’re arguably better off with them getting it over with this season – given the world is already so hideously shite that one more terrible thing might go relatively unnoticed, and there’s at least the mandatory COVID asterisk to console us (or Asterix, as most pundits appear to prefer it).

For the contenders fall away by the day. And, for all the relaxed misty-eyed romance of yesterday’s minor round closer, now the real business of the season begins – and we’re merely watching on from afar.

The phrase ‘shat the bed’ was more or less invented to describe what the Western Bulldogs have managed to do in the past three weeks.

From their ladder-leading, premiership-bound pinnacle in Round 20, they’re now out of the top four altogether – courtesy of a bizarre finish by Brisbane in which, to obtain the required percentage to leapfrog the Dogs, the Lions ultimately required a final score of… you guessed it – 119.

Which they managed – just – with mere seconds on the clock.

Only for the whole thing to be spoiled by a further goal from the resulting kick-in to Charlie Cameron – who frankly, of all people, should have known better. 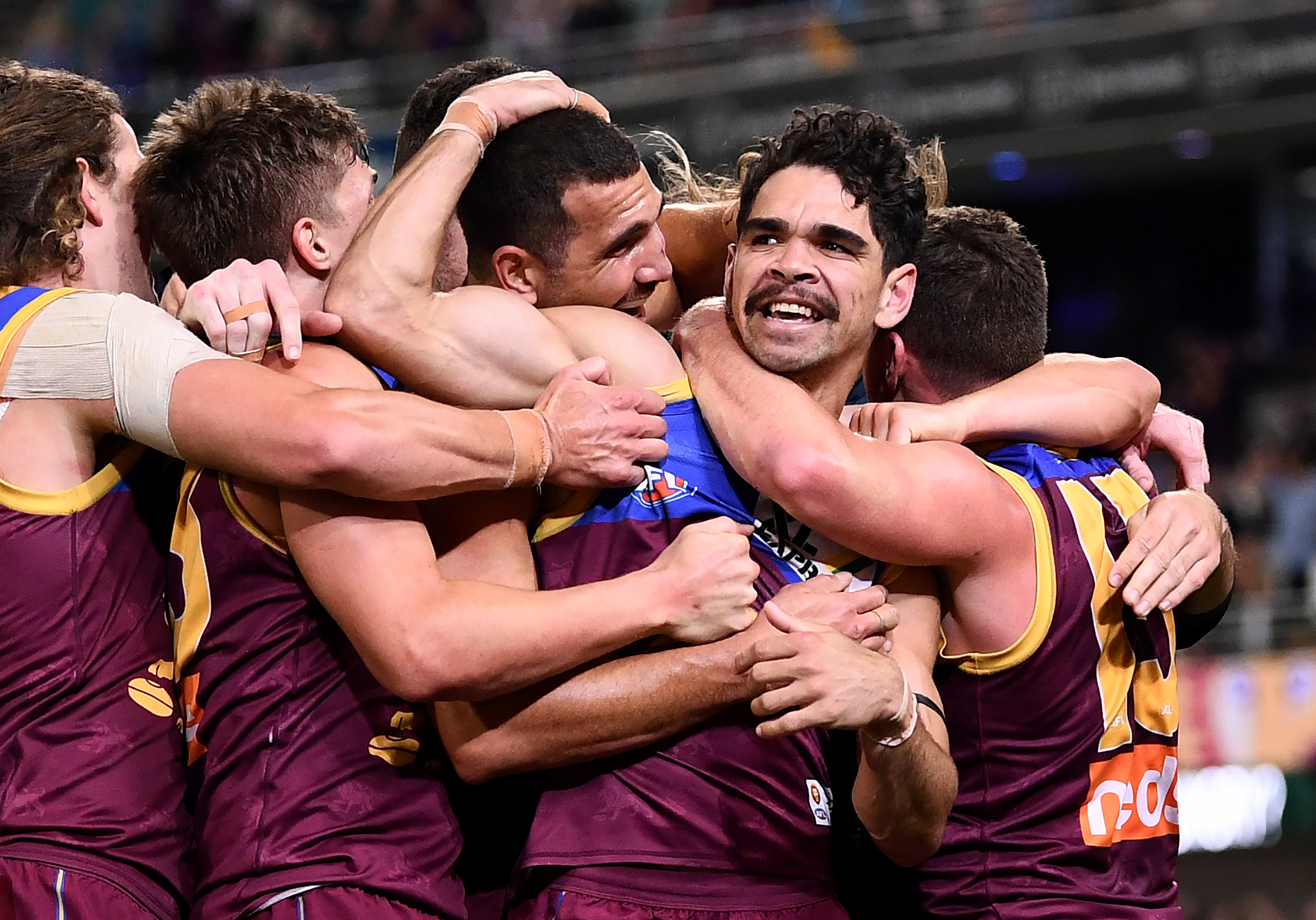 Charlie celebrates, before it dawns on him that he ruined a perfectly good ‘119’ reference. Photo: Dave Hunt / AAP

Although, when you really think about it, we did more or less exactly the same thing the Bulldogs did, but just a ‘Bad Team’ version of it: spent half the season in contention for the No.1 draft pick, then pointlessly won a couple of games late to fall to a likely fifth or sixth selection.

But we shouldn’t be surprised: even when we were failing as a ‘Good Team’, the Bulldogs’ rapid-fire 2021 fall from grace was the kind of stupidity I’d traditionally expect from Adelaide – such as in 2003, when we were sitting happily ensconced in second spot for several weeks before we helpfully decided to lose the last three games of the home and away season and finish fifth.

It’s also reminiscent of the time in 2008 that a big final round win propelled us into the double chance – only for St Kilda to bizarrely beat the Bombers by 108 points and knock us back down again. We lost a home elimination final the next week.

Eerily enough the team we beat in Round 22 was the Bulldogs.

Then of course there was the ultimate Bizarro Season – 2016 – in which the Dogs pinched the premiership from seventh spot… after we similarly pooped the proverbial pram with an unexpected final round home capitulation, after which a string of tight finishes across the ensuing weekend failing to fall our way saw us collapse from 2nd to 5th on the eve of the finals.

That year, of course, was the only time a team has won from outside the top four since we did it in ’98 (which, if we were being objective, isn’t a fair comparison since we stayed alive despite losing heavily in the first week of finals – but we’re not being objective so it is).

But, you know… there’s a kinda 2016 vibe to the looming finals series too.

No clear standout, with a couple of teams in the lower reaches of the eight in season-best form.

Except that this time round, the Dogs are playing the ‘Adelaide’ role instead of winning the flag.

The only other explanation for it all – successive teams failing all season to take gift-wrapped opportunities to qualify for the major round or the double chance – is that this year’s flag is clearly cursed and, deep down, no-one really wants to win it.

The finals series is littered with triggering prospects for many a Crows supporter, from annoying ex-players to the resident evil of a Power premiership – with the worst of all scenarios the horribly looming spectre of a Paddy Dangerfield vs Port Adelaide decider.

In case you’re in any doubt about who to go for in any given clash, I’m fairly confident this is the order of preference:  Davis > Charlie/Lyons > Keath > Lever > Danger > Port.

That leaves Sydney, who I haven’t quite forgiven for Tippett but who would probably break any prospective bandwagoner’s heart anyway, and Essendon, who are irrelevant. 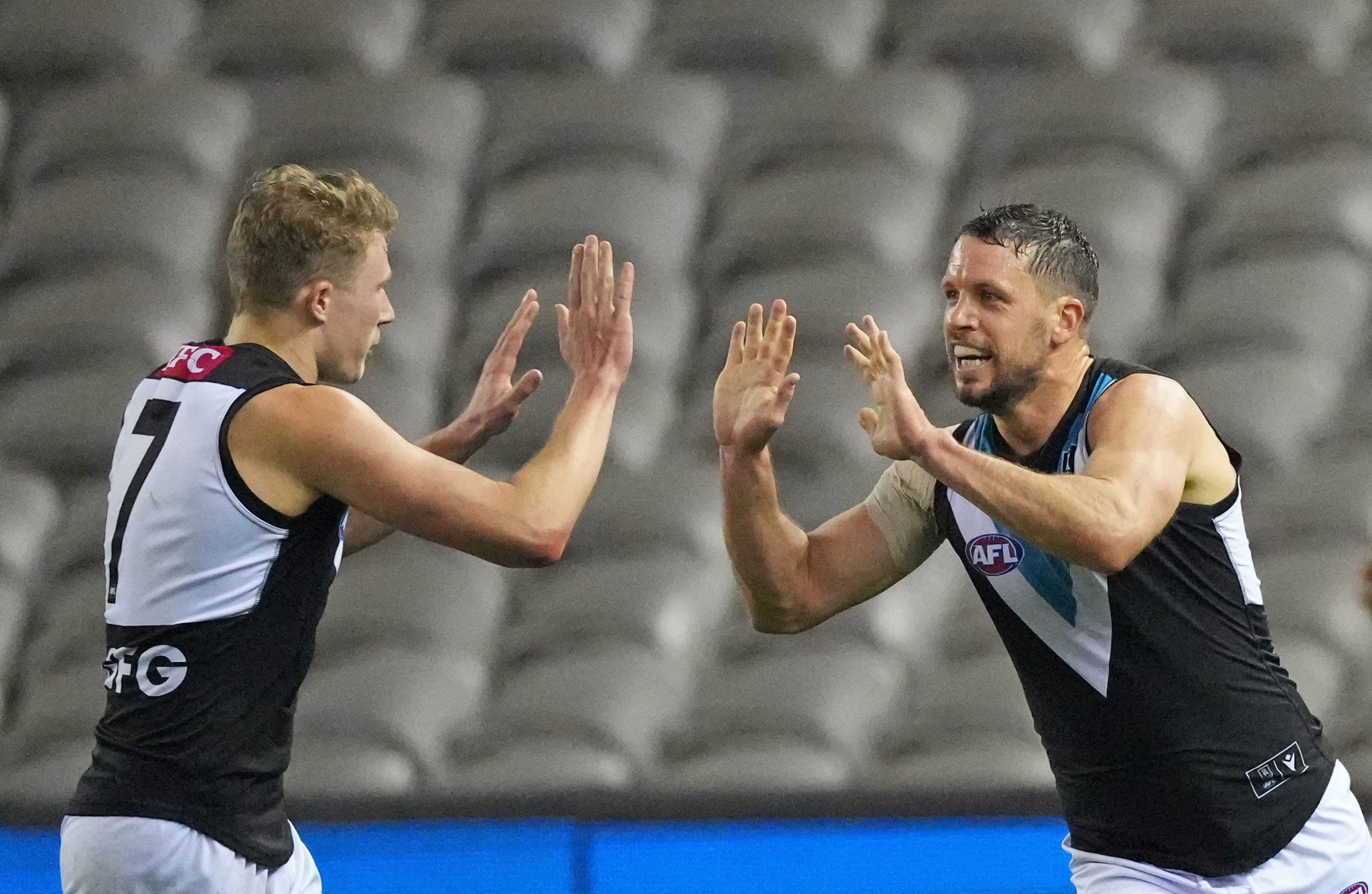 So where does that leave us all, after 22 rounds in 23 weeks?

One of those wins virtually cost St Kilda a finals berth; another stripped Geelong of a top four spot.

For all the intrigue about draft position, we end the year as the 15th-ranked team – which, let’s face it, was probably around where most people expected us this year anyway.

So for now, as Axl Rose once said, all we need is just a little patience.

And in the meantime, take solace in the fact that while there are a lot of unlikeable teams jostling for the flag – they can’t all win it.