The shallow bar against which all other shithouse years would henceforth be measured.

We awaited the new year 2021 with fevered anticipation: at last, the worst calendar year in many of our collective lives would be farewelled: goodbye 2020, and good riddance.

The fact that we were still mid-pandemic with sporadic lockdowns and border closures continuing to wreak havoc was but a minor nagging irritation, a small, irrelevant pimple on the face of our shared relief.

In terms of pandemic years, 2021 is like T2: Judgement Day to 2020’s original Terminator: similar premise, but bigger, longer and with more of everything.

Here in SA, of course, we’ve still had it relatively easy: a seven-day lockdown, compared to last year’s day three reprieve – but otherwise comparatively little for most of us to complain about.

But there’s one thing still to play out that could yet see 2021 take the honours from 2020 as the Worst Year Of The 21st Century (so far). 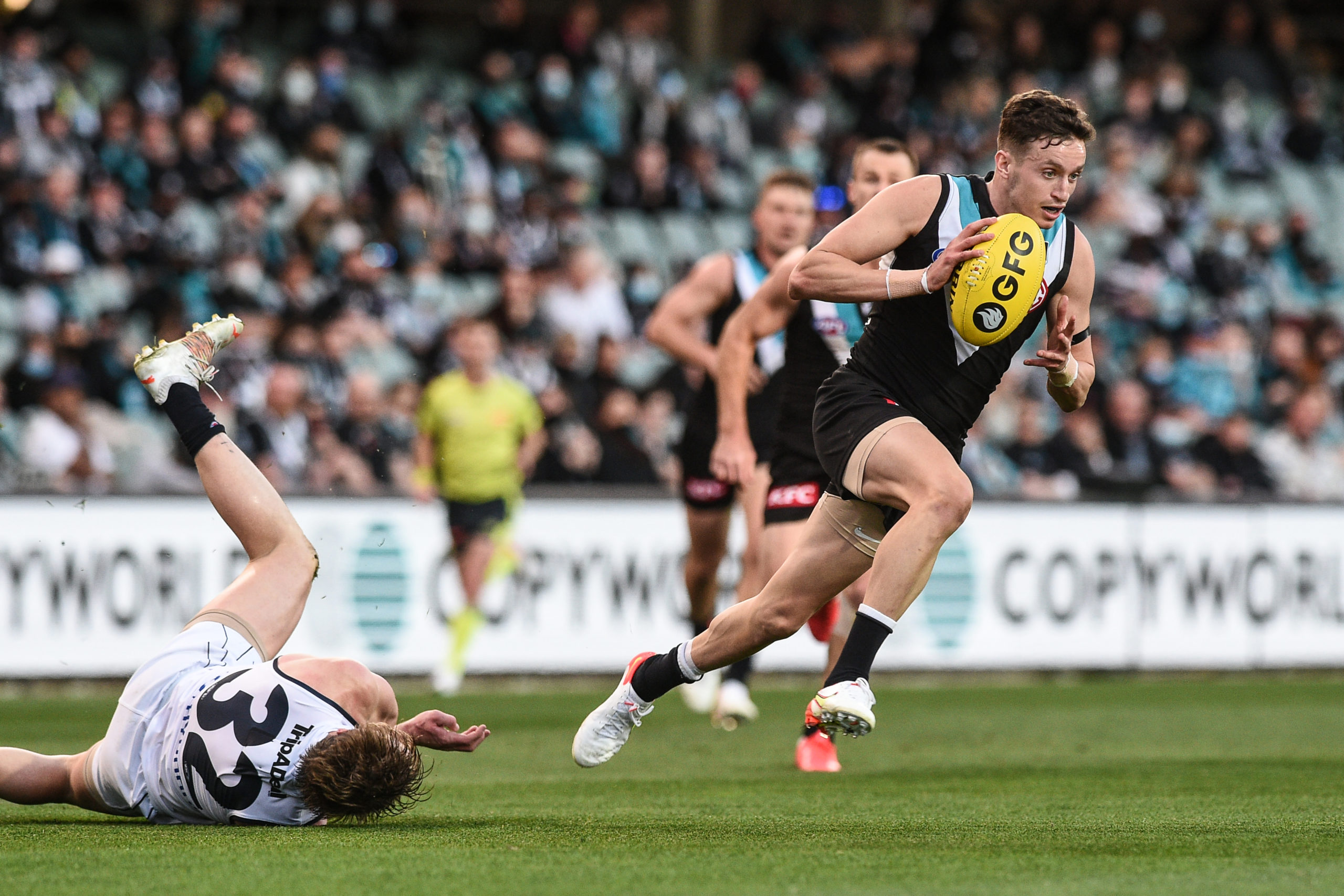 Fantasia running away from a prostrate Carlton player, as was the style of the time. Photo: Michael Errey / InDaily

Until now, it’s appeared a foregone conclusion that the Power’s low-key build-up to the major round would come to a satisfyingly unfortunate conclusion.

After all, their persistent inability to beat sides ensconced in the top eight did appear somewhat of an impediment to a September campaign in which every conceivable opponent was a top-eight team.

But we’re a fortnight out from finals, and I’ll admit I’m getting a tad concerned here.

And it’s not just that Port keep winning.

With the draw they’ve had in recent weeks, a few wins were bound to happen at some point.

It’s not even the manner of the weekend’s win against Carlton that raises concerns.

Carlton, after all, are not what one might call in any sense good.

Still, they had a few things to play for – coach’s job on the line, 300-game former captain’s farewell game and the chance to create a genuine pre-finals boilover – so I half-hoped they might spring a late-season upset.

And, to be fair, it’s just the sort of game Port might have amusingly dropped in years gone by.

So when Blues forward John Honey (who really should be traded to West Coast just for the novelty of him playing in the same forward-line as Jack Darling) kicked his second goal to put Carlton 23 points up halfway through the second term, hopes were high.

Port would stumble at the penultimate hurdle, lose to the Bulldogs next week and slump to fifth at the final siren.

And then something odd, and deeply unpleasant happened.

In fact, they didn’t just stop: they did exactly what the Power club song warns against: they stop-stop-stopped.

Leading five goals to two, they failed to kick another major for the rest of the game – in which time Port kicked a lazy 19.

If there was one consolation, it was that from Carlton’s biggest lead of 23 points, to when Port hit its highest margin of 96 (before a late behind to Levi Casboult brought the final differential to 95), Port’s turnaround was at least pleasantly ironic: 119 points. 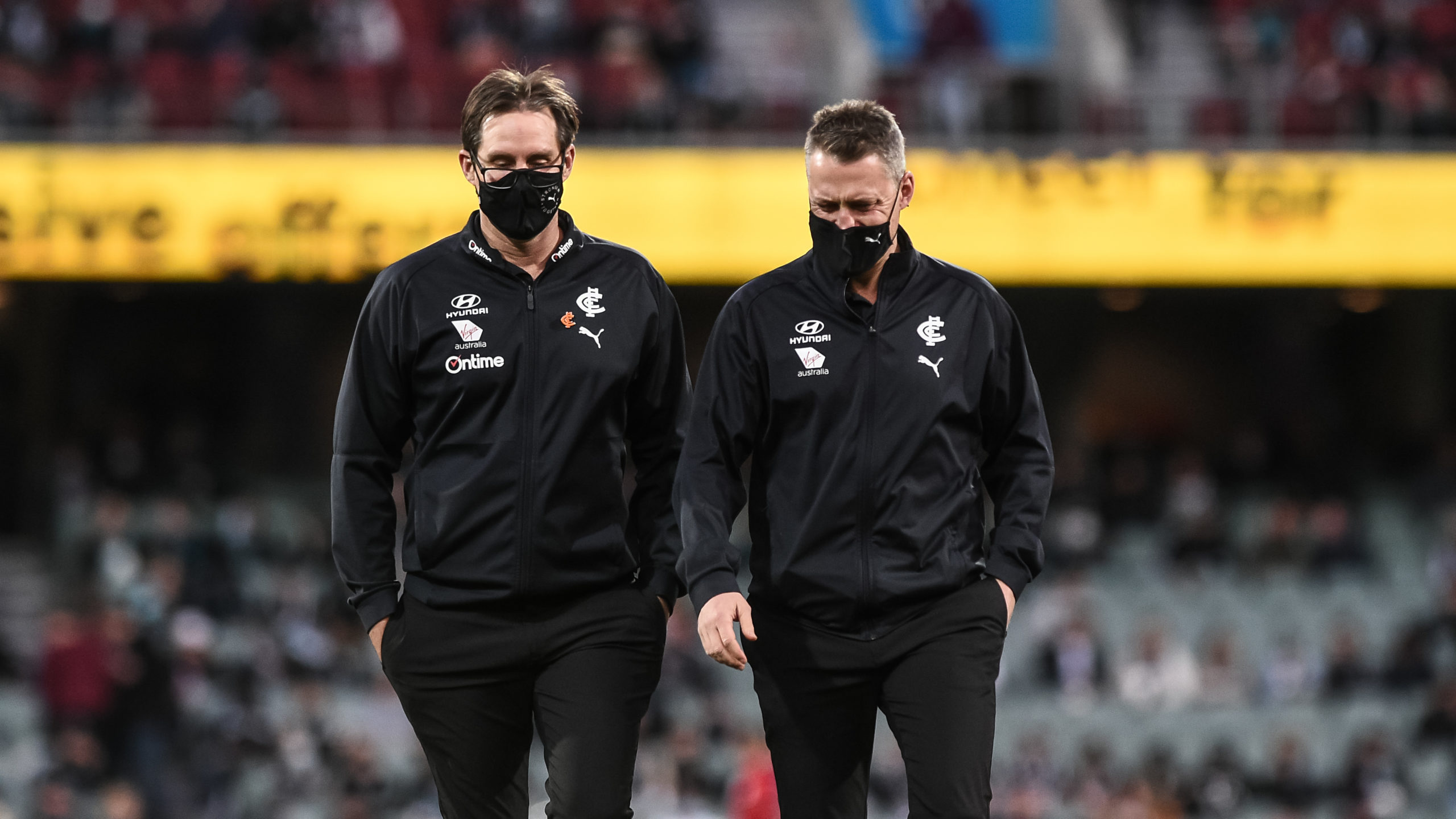 Still, it’s neither the win nor the manner of it that really rings alarm bells.

There’s also the fact that there appears to be fewer and fewer genuine fellow contenders.

The Dad’s Army brigade at Geelong have been dealt a major blow with Tom Stewart out for the season – losing not just his play-making rebound from half-back but also, at 28, his youthful exuberance.

Then there’s the Bulldogs, who’ve spent almost all season in the top two but are now looking lacklustre, have lost Josh Bruce for the year and are just one loss away from potentially falling out of the top four altogether.

That loss, incidentally, would be to Port, in a final round in which, bizarrely, the four highest-ranked teams all play another top-four side.

Brisbane would need to win (and well enough) to displace the Dogs and regain the double chance they lost through the past month of being distinctly average.

And then there’s the Demons: on top of the ladder, but still hardly convincing yesterday in a 41-point win against a distinctly below-average side. 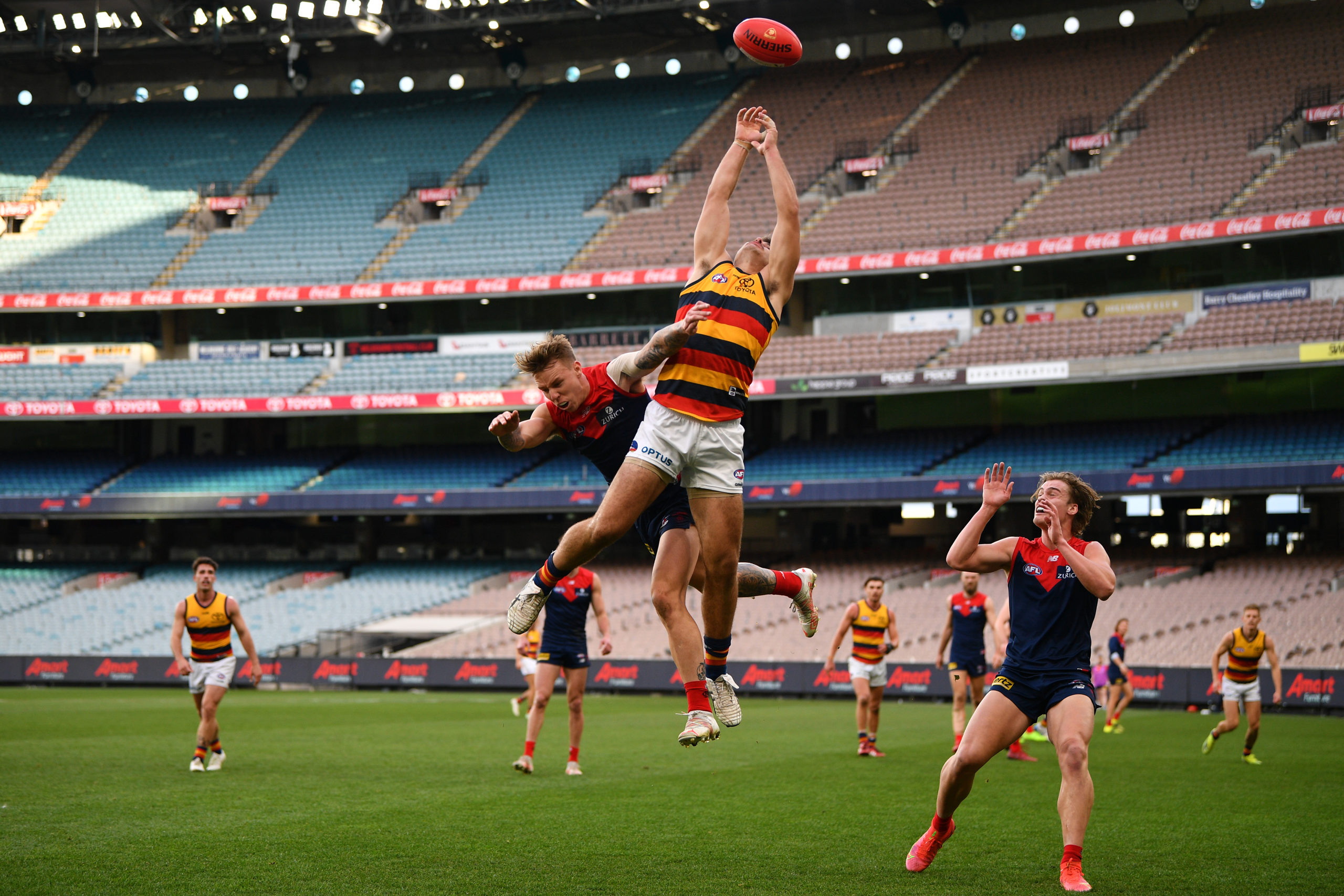 Adelaide’s performance in the penultimate round really typified our 2021 mantra of Not Being Terrible.

In fact, I give it the highest praise I can give one of our many losses this year: it could have been worse.

For a while there early in the second, it felt like a Carlton-style 119-point turnaround was on the cards after we’d thrown away a bright start with errant kicking. But a mid-game rally to close the margin back to single figures before the final-term blowout was heartening, in a low-key sort of way.

And helpfully, the loss kept Port out of a top-two berth for another week, so it was really the best possible outcome.

I predict big things for him at the club in years to come.

Meanwhile, our defence held up ok – well, apart from the minor setback of Dees forward Bayley Fritsch kicking seven (7) goals, possibly suggesting we might need an experienced hand to hold down a key defensive post.

If only such a player existed. 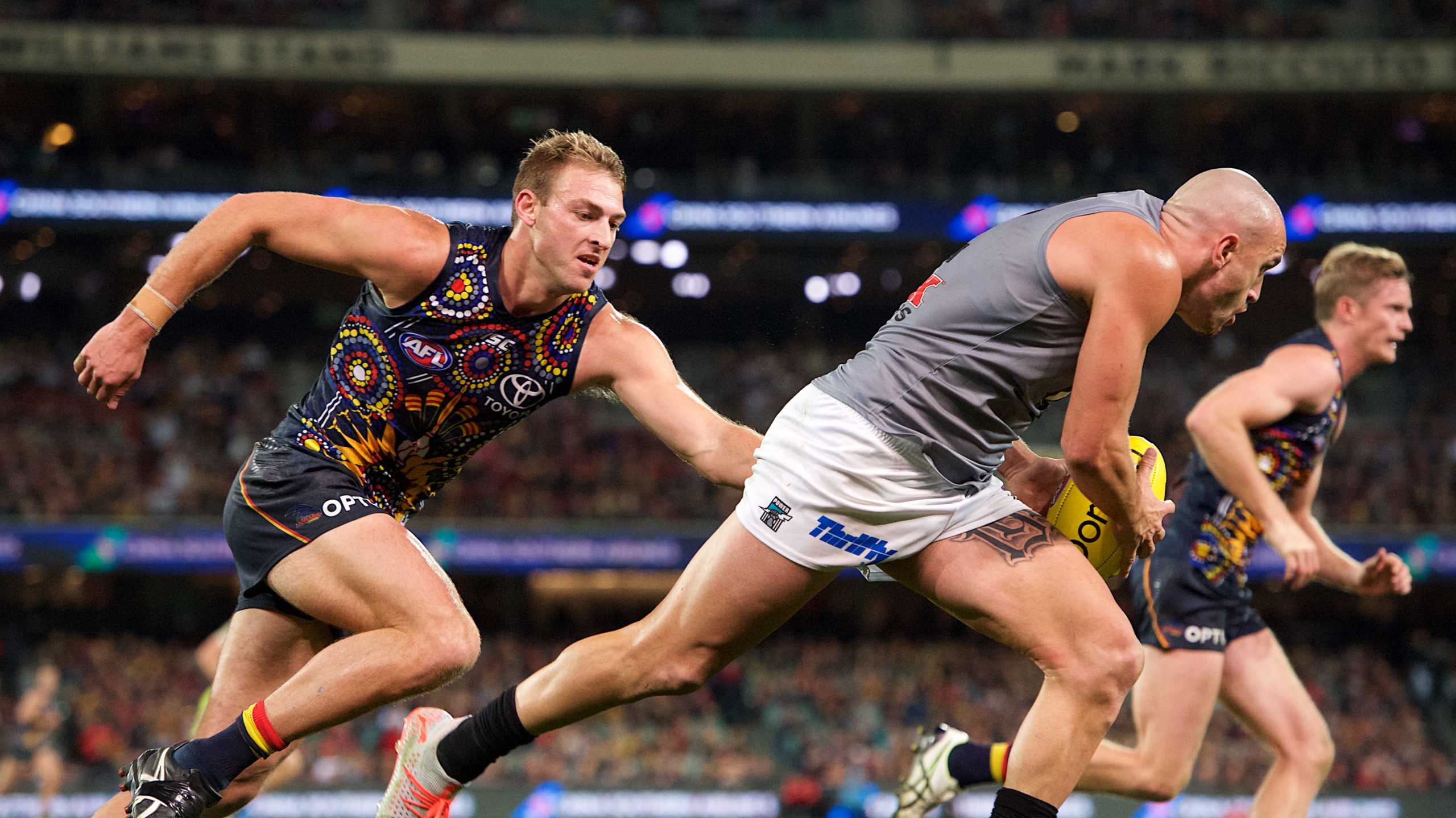 On a related note: I would like to apologise to Daniel Talia, about whom I once made a gag relating to his patented ‘vomiting cat’ defence when contesting a potential loss of licence for a speeding infringement a few years back. However, a few weeks ago my golden retriever pup Lily shat in the car while I was driving on the Victor Harbor Rd and I can confirm that this is, indeed, quite distracting.

And, look – I get the point of why Tals and Lynch are being moved on.

Talia is 30 in October, which is approaching ‘letter from the Queen’ territory in regular human years.

We’re years off where we’re hoping to be (if Carlton’s anything to go by, they could both have retired not just from footy but from whatever career they’re doing next by the time our rebuild’s done) and at some point you have to get games into the next generation, even if it leaves you somewhat exposed in the short-term.

Still, you always need some experienced heads about the place.

But it doesn’t change the fact that these annual unceremonious culls of former favourites, complete with cheery platitudes about careers well spent in the service, inevitably feel a bit like the scene in Animal Farm where Boxer the cart horse is wheeled off to the knacker’s yard.

And then it’s off to the draft we go, where all teams are equal but some (in this case Collingwood and, again, the Bulldogs) are more equal than others.

Yes, we are entering that tedious time of year when the term ‘wantaway’ re-enters our lexicon for a few frantic weeks, and random punters proposing random hypothetical three-way trades is packaged up as legitimate news content.

Tony from Bellfield has thrown up a three-way trade involving Geelong, Fremantle and Carlton. What do you think?

Which is hardly surprising: when one’s team has spent four years out of finals action, and two mired on the lowest rungs of the ladder, the trade and draft periods inevitably become akin to your Grand Final.

And unfortunately, we’ve had similar success in some recent seasons as we had the last time we actually played a Grand Final.

A few seasons ago Adelaide, somewhat controversially, overlooked SA lad Will Hayward in the 2016 draft to snare with their first pick a Victorian speedster named Jordan Gallucci.

The Gooch is currently plying his trade in the VFL having been delisted by the Crows last year, while Hayward kicked two crucial final quarter goals to help the Swans break away from a fast-finishing North Melbourne on the weekend.

In so doing, he effectively consigned the Kangaroos to their first wooden spoon since 1972 – and snatched a prospective #1 draft pick from the Crows.

(Not to make you feel worse, but in the same draft we also picked Gooch’s mate Myles Poholke (delisted) instead of South Australian and now Richmond captain-in-waiting Jack Graham, who thanked us by kicking three goals and shutting down our most effective midfielder in the 2017 Grand Final.)

Or maybe it’s only ironic in the ‘rain on your wedding day’ sense, which isn’t really ironic at all.

But it’s certainly, as Alanis so prophetically noted, like 10,000 spoons when all you need is a knife.

Or in this case, more specifically, like 10,000 knives when all you need is a spoon.

Still, all of this would be manageable. Fine, really.

I can handle my team being persistently crap with no chance or even, evidently, plan of playing finals until I’m in, at least, my late-forties.

I can handle the world becoming a pandemic hellhole.

Well, that really would mark this era as truly the end of days.