It also meant that Adelaide had plenty to play for when they took on the Hawks later that evening.

Sure, you may lament the prospect of ‘winning’ successive wooden spoons, but where some see a crisis, the more optimistic among us see an opportunity. And if there’s something we’re never in short supply of here at Fumbleland, it’s optimism.

For North’s victory meant that a mere two points – a pair of draws – separated us from the two teams below us on the ladder.

Which meant all we had to do to snare the 2021 number one draft pick was lose our upcoming games to Hawthorn and the Kangaroos.

Oh, and three other games as well.

Which, given our recent run of form, was more likely than not.

Not, mind you, that I’m pushing for the word that dare not speak its name.

After all, as Carlton can attest, even two decades worth of high draft picks won’t make up for a culture of mediocrity, with the Blues’ rebuild strategy effectively summed up by the sentiment of many of their supporters: ‘Tanks for nothing!’

So, why – you ask yourself – is this Fumbles lunatic so preoccupied with this year’s number one draft pick?

Well, for a start, the Crows are a frustrating lot, but they’re no Carlton. If anything, our approach since the turn of the millennium – until last year, at least – has been the exact opposite of theirs: steadfastly refusing to bottom out.

Not for us the abundant riches of the draft’s upper echelons: our recent club best-and-fairests have featured two rookie draft selections, our selection from a one-off ‘mini-draft’ that we traded into, a second-round draft pick for which we swapped a previous Malcolm Blight Medallist and our current captain, who was drafted at pick 44.

But the thing is, while we’ve generally been competitive, we’ve never managed to do what seemed so easy back in the late-90s – win a damn flag.

And yet, the draft is always a lottery, you say.

Yes, but number one draft picks aren’t all Jack Wattses and Paddy McCartins.

And as you probably already know, this year’s presumptive number one pick (after one or two father-sons are hived off to their respective clubs) is a South Australian kid named Jason Horne.

The Horne-dog, who has huge raps on his ability to break away from packs with explosive pace and outbody more battle-hardened opponents, is currently plying his trade (or not, as the case may be during this lockdown hiatus) with South Adelaide in the SANFL.

Now, without ever having particularly watched him play, I’m nonetheless blissfully confident he’s the best player to emerge from South Australia in a generation.

Which will make it kind of annoying when he’s pulling on his Hawks or North Melbourne guernsey in years to come and destroying unsuspecting opposition midfields (including ours, presumably).

Because, as you also probably already know, Adelaide didn’t lose to Hawthorn on Saturday night.

It was perhaps the most ambivalent I’d been about a football result since Paddy Dangerfield kicked the winning goal against Port in Round 10, 2017.

And it was all set up so promisingly too.

It was perhaps the only time you could be objectively delighted about having to play your nominal home game against a fellow bottom-three side in their home state.

Not to mention that it was kind of a relief not to have to go and watch the Crows play in the worst Adelaide downpour since Showdown 2.

But the thing is, it was a good win, objectively.

There was plenty to like – not least Chad Wingard externalising his frustration that he jumped off the Port wagon just in time for them to (sadly) become a top-four side while the powerhouse he went to instead entered a potentially-protracted rebuild of their own.

And not only did the Crows play well (albeit against the 17th-placed side on the ladder), but the right Crows played well.

Schoenberg and Chayce Jones had perhaps their best games so far, Hamill and McHenry looked composed, Fogarty looked as comfortable as he has all year, while Himmelberg was back to his form of late-2020, when we finally and briefly thought he’d arrived once and for all. 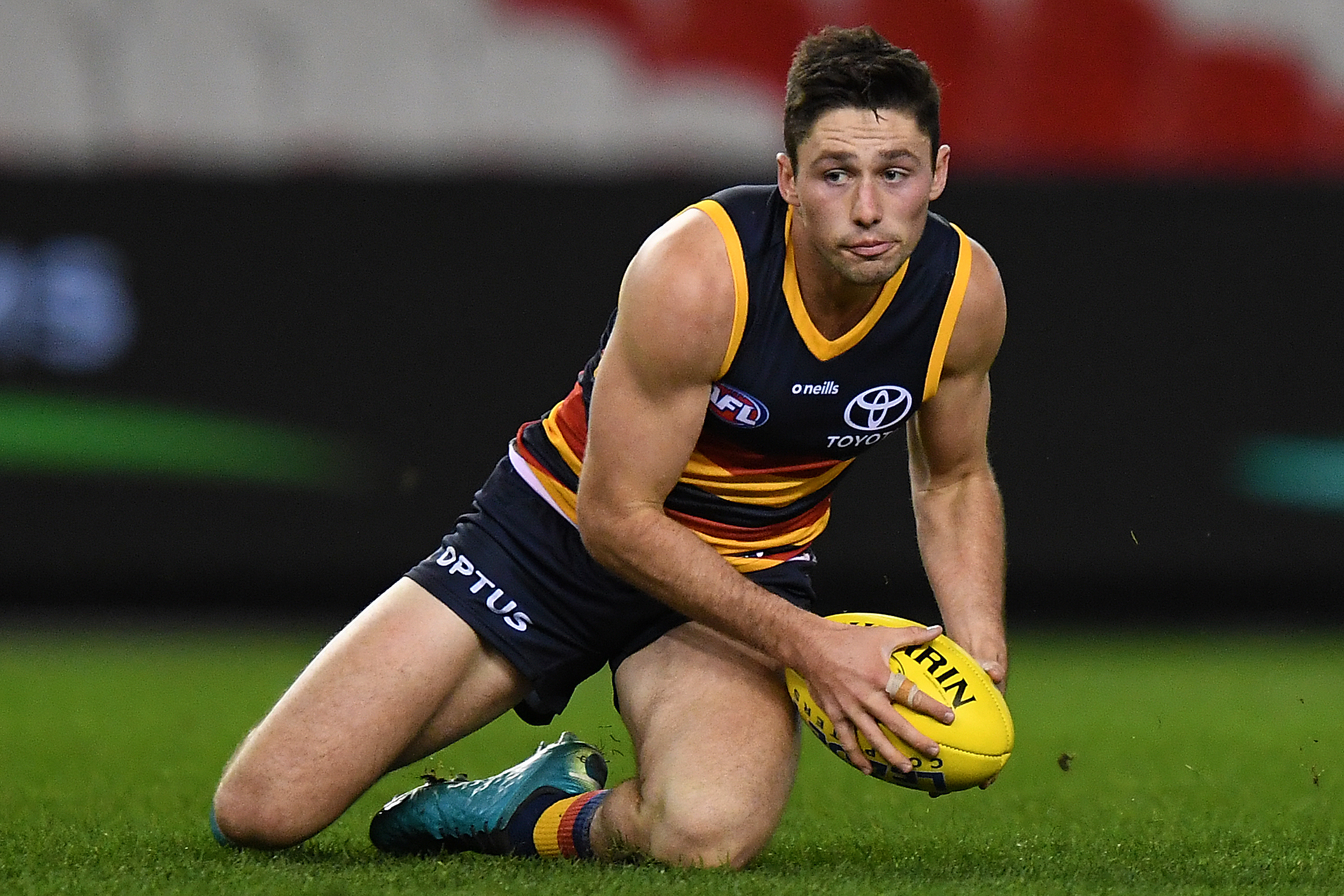 THE CHAYCE IS ON: Jones continues to flourish in the Crows backline. Photo: James Ross / AAP

And the veterans continued their Indian summer – Tex with four goals, Laird with three Brownlow votes and Lynch continuing to do nothing that suggests he doesn’t deserve a new contract.

The team collectively, for the first time in some time, moved with pace and dare – and kicked straight. Much as they had the last time we’d played the Hawks, when we went into the main break with 14 goals and no behinds – only to lose anyway by three points.

Indeed, a season in which we only play Hawthorn would probably be quite entertaining.

Still, by the time we beat the Demons in Round 10, many Crows supporters were lamenting that had we not let slip those chances against Hawthorn and Freo the week before, we’d have been ensconced in the eight heading into the halfway mark of the season.

What if the Cats had come a little harder a little sooner in Round One? If Gold Coast ruckman Jarrod Witts hadn’t been sidelined with injury during a dominant display against us in Round Three? What if that free kick for a deliberate out-of-bounds had been paid against Nick Murray?

Because for all our supposed improvement, very little ultimately separates us from another year of despondent failure. 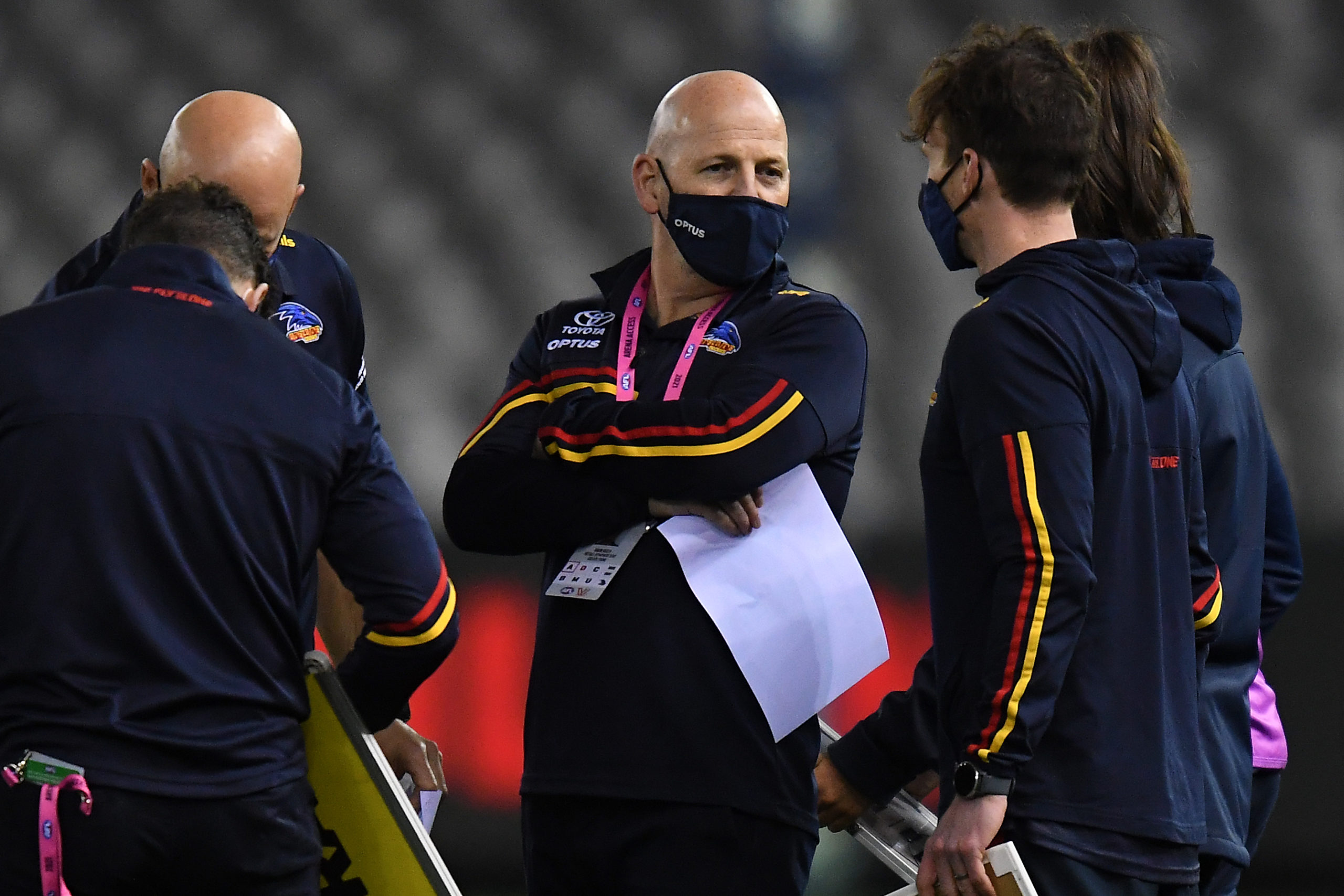 According to COVID protocols, the Crows coaching panel must contain at least two doppelgängers for Bane from The Dark Knight Rises. Photo: James Ross / AAP

And don’t get me wrong: I’m not talking up this Number One Draft Pick business because I want us to be bad.

If it weren’t for those wins – some of the best we’ve had in recent years (or indeed, ever, in the case of the Geelong and Melbourne games) I’d be fuming at the thought of another bottom-of-the-ladder finish.

But those victories have shown us that the ceiling for this young group can one day be high.

The losses that mounted up around them tell us something else: that we’re at least one top-shelf recruit off challenging the contenders.

And in the process, instead of moving towards a second successive number-one draft pick, actually leapfrogged Collingwood to climb to 15thspot, behind Gold Coast on mere percentage.

Honestly, we can’t even fail properly. Let alone successfully do the thing we’re not allowed to speak of.

In other words, we blew the draft pick plan.

Which was, in the words of Derek and Clive, to Get the Horne.

I guess the least we can do now is try and compensate by winning a couple more games.