Some 55 years since England last won a major tournament, soccer (or football, as they prefer to call it) is still not coming home.

When the song that spoke of football (ie soccer) coming home was first written, ahead of the 1996 European Championship (which distinguished itself by being actually held in 1996, due to the relative absence of global pandemics), it was a ‘mere’ “30 years of hurt” since England’s sole World Cup triumph of 1966.

The same year, incidentally, that St Kilda won their lone VFL flag by a solitary point.

And while both outfits have had their competitive moments since then, it’s really been a pretty unpleasant time of it, all things considered.

Which puts our 23 years (and counting, obviously) into some perspective (also, the fact our team doesn’t represent an entire nation and nor, really, does the sport it plays).

But the three-decade milestone is well in sight.

And given Euro and World Cups are only played every four years, England’s ongoing torment would only be about 27-and-a-half years of hurt in AFL years, which I guess are like ‘dog years’ to humans.

Still, it’s pretty clear the only coming home Adelaide supporters will take part in for the foreseeable future will be despondent trips back across the borders (presuming they’re open of course) as we collectively fly as one after yet another dispiriting loss.

Mind you, in the case of Friday night’s nationally-showcased humiliation it was really more like this:

It’s particularly annoying because we’ve actually been Not Too Bad for much of this year but, when given a prime-time slot, we appeared instead to go out of our way to demonstrate why we won last year’s wooden spoon.

Of course, I felt sorry for all those neutral football supporters who tuned in to the AFL’s most prestigious timeslot and had to watch my team defiling everything that is good about Australian Rules football.

But mostly they should feel sorry for me, who has to watch them again next week, and the one after that.

They say be careful what you wish for, and to be fair I was hoping for a historic result that we’d be talking about for years to come.

But frankly, our record lowest score against a team currently outside the top eight probably wasn’t what I had in mind.

Still, there were consolations.

Harry Schoenberg did a solid job minding the in-form Darcy Parish, who may sound like the leading man in a quaint Richard Curtis rom-com but loomed as the game breaker for Essendon (although in the end the game was already fundamentally broken by us, so they didn’t need one).

And Billy Frampton played a solid role in defence. (Unfortunately, he was actually brought in to kick goals as a forward, but that bit didn’t work out quite as well.)

Still, it’s worth noting that Billy was drafted by Port at pick 84 (effectively the second last player picked that year), and we got him for a future fourth rounder, so we should probably stop treating him like an underperforming first-round draftee.

Especially since we have enough of those to begin with.

And on the plus side, we still scored as many goals as both England and Italy collectively managed during 120 minutes of play in this morning’s Euro final. So that’s something. 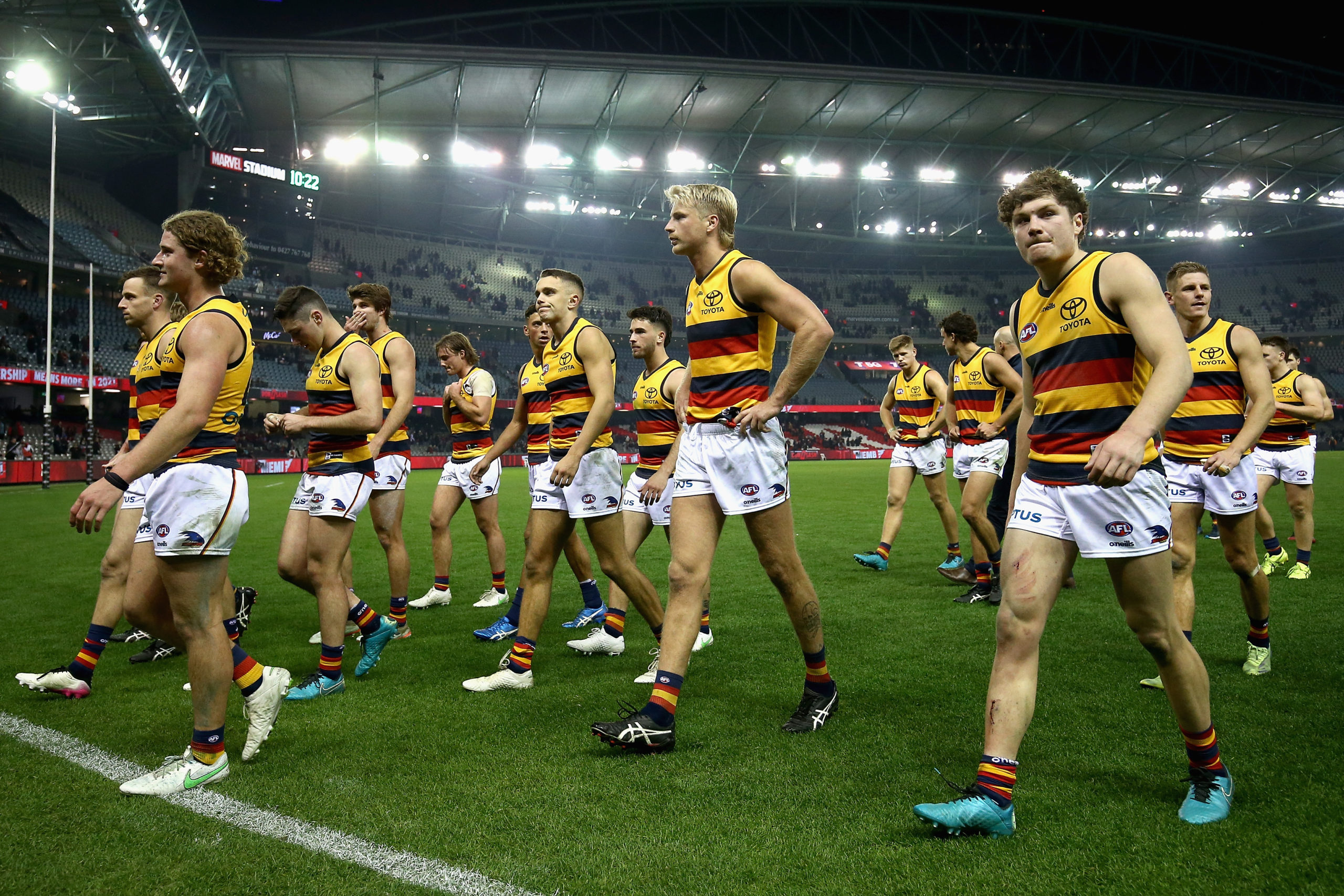 We should probably get used to these expressions. Photo: Rob Prezioso / AAP

But it was a particularly odd game, with the Crows’ brains’ trust (for want of a better phrase) ditching the dashing-but-oft-hapless style the team has been honing with mixed success for several months, in favour of a slow, deliberate, kick-and-mark approach – as if desperate not to play Essendon at their own game.

It reminded me of a match I’ve long remembered from the Dons’ modern heyday back in 2000, when the Tigers under the late-lamented Danny Frawley opted for a methodical, slow, possession game against the then-relentless Bomber machine.

Like us, things started ok, with Richmond trailing by a mere goal or two at the first break.

But then followed two and a half stanzas of complete frenetic Essendon domination – before the then-lovable Tiges again managed to slow the game down with their long, pointless passes.

In our case, the scoreboard flattered us – which is saying something, since it looked so terrible.

Frankly, I haven’t been this disappointed in Ben Rutten since he gave away that free to Jack Anthony in the 2009 semi-final.

Still, at least one of our former players was improving our collective mood, with Simon Goodwin’s Dees running over the top of the Power at home, in the latest thrilling instalment of ‘Port can’t win against Top Four sides’. 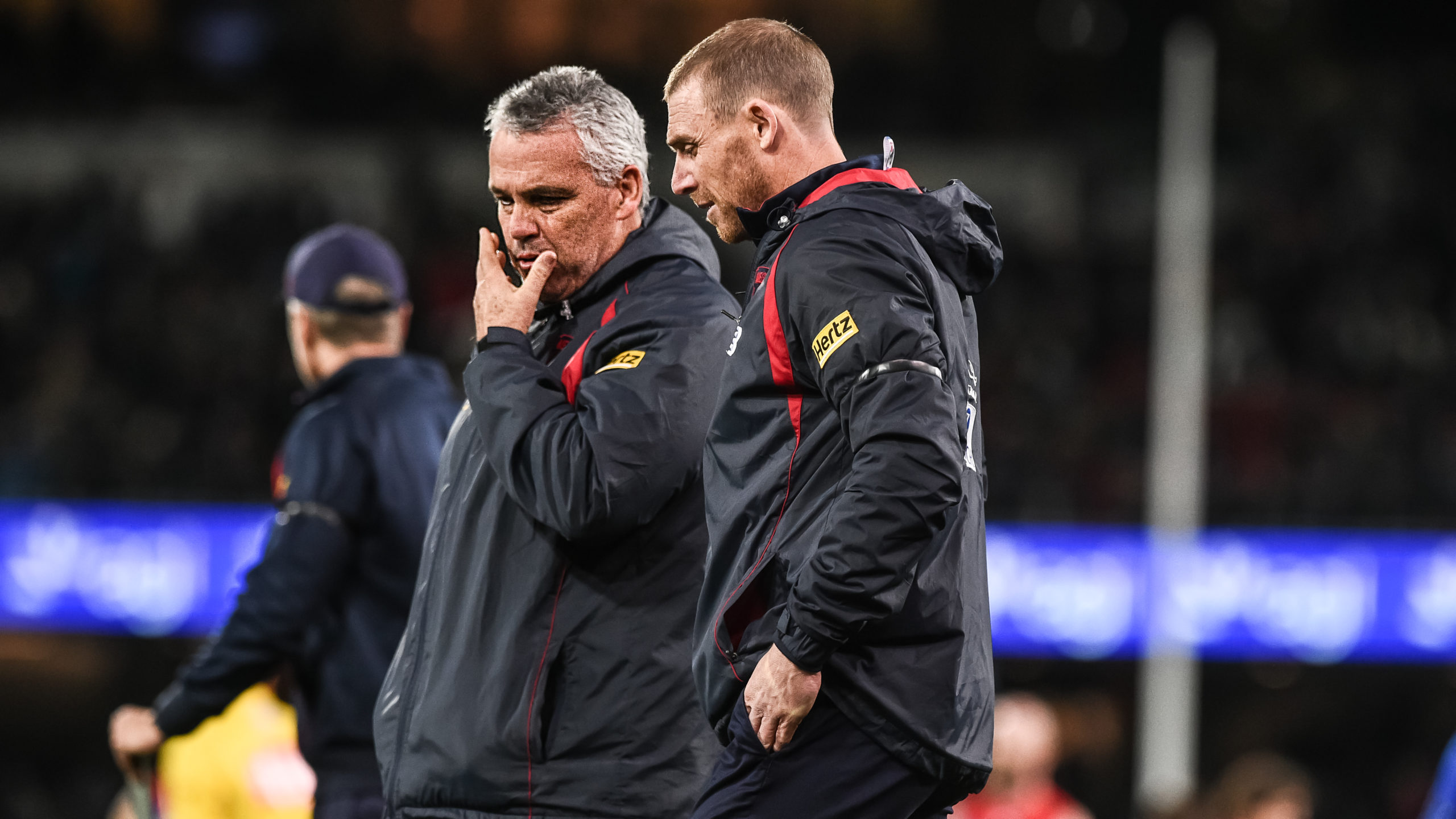 I will still never get used to this sight. Photo: Michael Errey / InDaily

It seems an odd strategy: they know they’ll have to play Top Four sides in the finals, right?

We shouldn’t be too harsh on them though: beating Melbourne at Adelaide Oval isn’t for everyone, I guess. 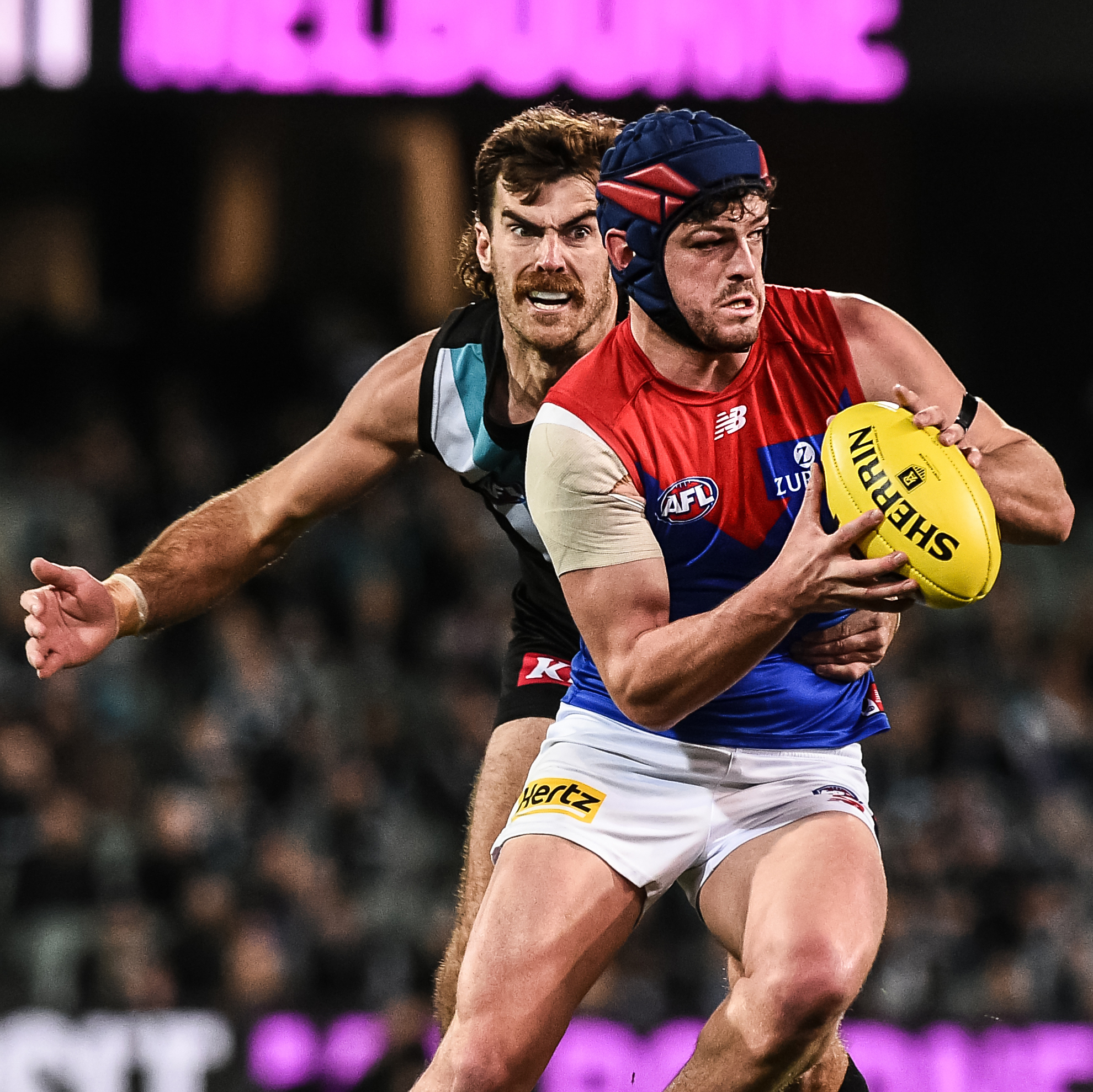 Delightfully, the 31-point loss sent their percentage plummeting back to an aesthetically-pleasing 119, and pushed them out of the Top Four themselves – though sadly losses from two of the sides above them keeps them in contention, albeit by default.

The Bulldogs went down to Sydney, with apparent Crows trade target Jordan Dawson kicking three goals from a wing. Between you and me, I can’t really see why he would leave Sydney for Adelaide at this point, but I’m sincerely hoping he doesn’t see it that way and that we make him the proverbial offer he can’t refuse.

Meanwhile Brisbane – inexplicably – surrendered to a rejuvenated St Kilda on the Gold Coast.

Because beating St Kilda in Queensland isn’t for everyone, I guess.

Still, it was that kind of round: teams bizarrely incapable of taking their chances to either enter or consolidate their spot in the upper rungs of the ladder.

Amusingly, one of those was Richmond, whose supporters had another dire weekend (apart from Ash Barty, of course – who is now officially the Fumbles’ favourite Tigers fan although, to be fair, the competition isn’t great).

The reigning premiers suddenly look as much a bottom-five prospect as a flag threat, with their loss to Collingwood having the added bonus of pushing us into ‘top-three draft pick’ territory.

Still, the Hawks refused to lift their game against Freo, despite the obvious incentive of further enhancing our draft hand.

Honestly, I’m starting to wonder why we bother playing so badly if these other teams aren’t gonna come to the party.

It’s all enough to make one feel a tad despondent – but we must remember that a young, rebuilding side is always going to drop their bundle at some point.

And after all, as the saying goes: “The night is darkest just before dawn.”

Unfortunately, the saying doesn’t also point out that once dawn breaks you’ve still got another 11 hours before you get to knock off work and enjoy your day, and that most of those hours will be spent toiling aimlessly for apparently little immediate return or reward.

So, metaphorically speaking, we’ve still got all that to look forward to.

And even then, as England discovered today, it may not come home, that prize we seek.

(Although at least if it does, we won’t have to wake up at some ungodly hour to watch it.)

Reflecting on today’s Euro2020 result, it occurred to me that the fact we always hear about football coming home and the reality that it never actually gets there is probably an intrinsic part of the English psyche.

Yes, there’s that unshakeable belief in their inherent competence in the face of fairly compelling evidence to the contrary (I was born there, so I get to say that), but also a sort of revelling in their own painful journey.

Our own belief in the journey we’re on got fairly rudely shaken this week.

But, like England, all we can do is carry on with it, behind our incredibly, stupendously, monumentally frustrating football club, and dream of better days.

Oh, and hope that Port continue to cheer us up a bit in the meantime.