Sure, I’m as unconvinced as the next person about our peculiar new tactic of handballing directly to the opposition.

And look, I’ll concede that a six-goal-to-one final term to go down by 52 points at home was arguably Not Our Finest Moment.

We can partly blame the build-up, I guess (along with the monumental gulf in talent and/or experience).

The preceding week’s COVID frolics saw the Crows told to jet to Melbourne and join the broader AFL hub, such that they could easily fly back to Adelaide, which wasn’t in lockdown in the first place, to play their home game there against Brisbane, who were also in Melbourne.

In the event it was the most futile away trip since the last time West Coast visited Geelong.

There’s some irony, of course, in the fact that Melbourne is now considered the safest haven in which to salvage the AFL season – which is, of course, the most pressing priority facing the globe in these pandemic-afflicted times.

If things carry on as they are, we might even have to consider moving the Grand Final to the MCG.

But regardless, Adelaide hung in for a bit only to be ultimately outclassed – and is that really such a bad thing?

Just think about the alternative for a sec.

What if we’d somehow done everything completely differently and pinched a remarkable victory?

Well, for a start, Brisbane would have tumbled out of the top four and, with seven rounds to go, might have squandered their best chance to consolidate a top-two berth (although in truth their draw is ludicrously soft, so probably not).

And if that had happened, it would have meant that one of Patrick Dangerfield, Jake Lever or Port Adelaide has an ever more fair-to-even chance of ending the season with a premiership.

It was best that it went this way.

Because it at least consolidated something that I’d hitherto suspected.

That Charlie Cameron and Jarryd Lyons are arguably the least objectionable of the former Crows currently in premiership contention. 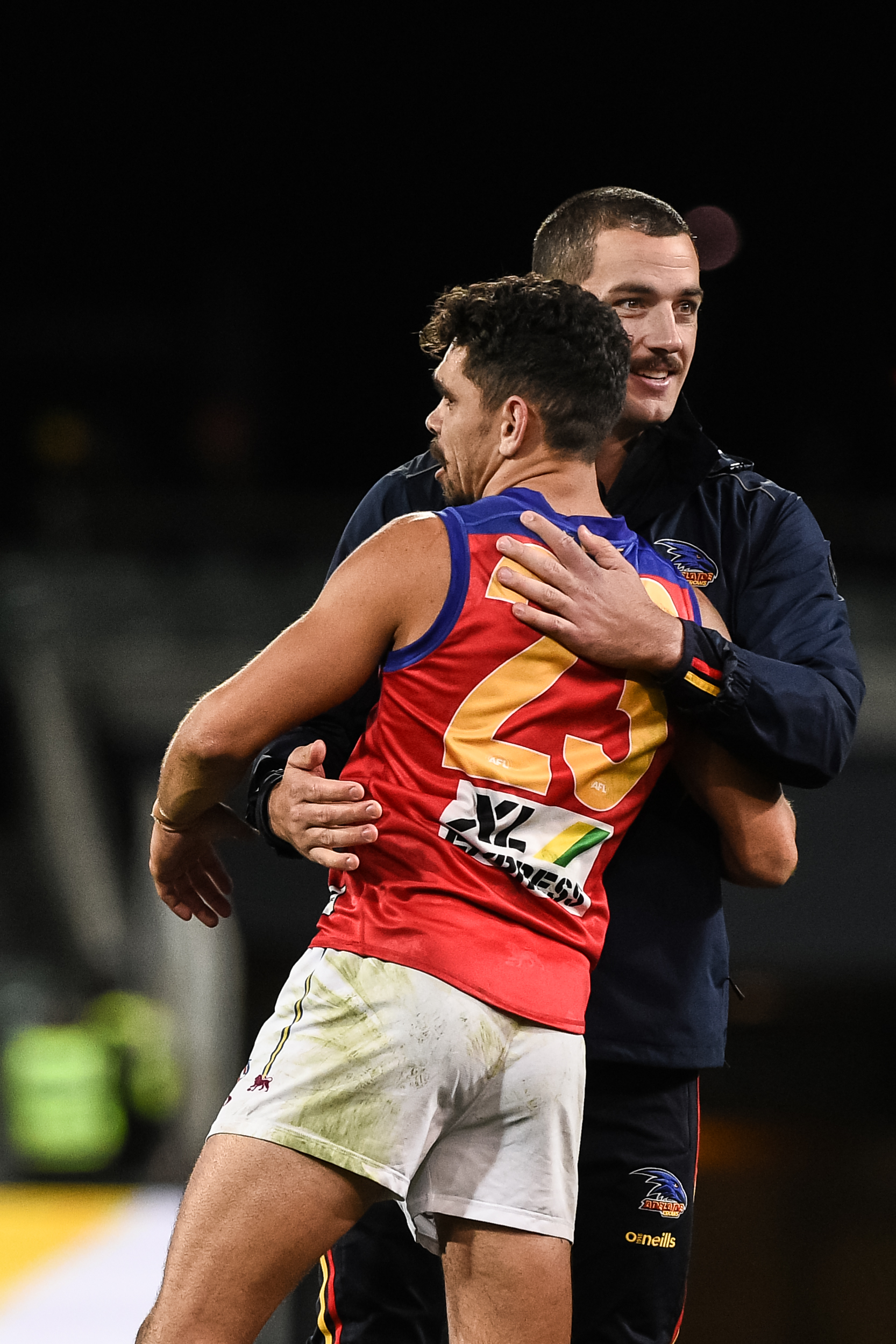 An injured Tex and an uninjured Charlie embrace after the game. Photo: Michael Errey / InDaily

Or at least on par with Alex Keath, who I more or less forget is playing for the Bulldogs most weeks anyway.

Particularly when Lyons finished his 31-touch, 10-tackle performance with a boundary interview in which he gushed that the Crows “did a hell of a lot for me to get here, and I’m probably forever in debt to the Adelaide Footy Club”.

He even noted, unprompted, that the match fell on the anniversary of the death of former coach Phil Walsh, citing that – along with his return to Adelaide Oval for his 150th game, in a week in which he’d signed a new three-year deal with Brisbane – as contributing to “a pretty special day”.

Since we’re already depressed, it’s worth noting that Walsh’s final game as coach, six years and half a week earlier, was also against the Lions – a scrappy affair buoyed by a six-goal comeback after going into the final change 24 points down.

Charlie Cameron had 13 touches and a goal, and took home a Rising Star nomination.

On Saturday, it was nine touches, for three, and his star has already well and truly risen.

The guy we selected with the draft pick we got for him ended up, after a slow start, with 17 and a goal – in the SANFL. 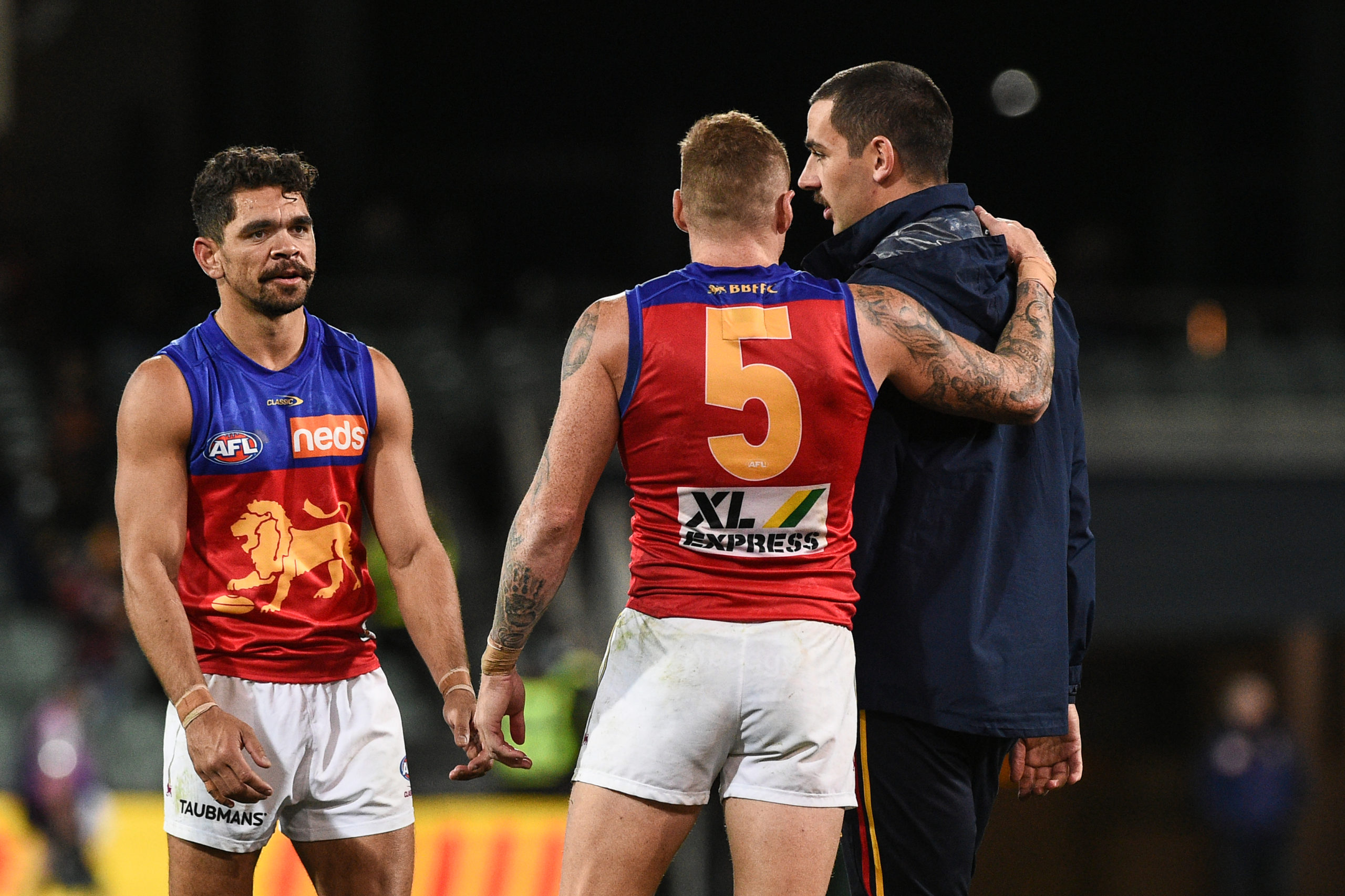 The point is, we’ve now reached that point of the year where avoiding the prospect of someone really objectionable winning a flag (ie Danger, Lever or Port) must outweigh any short-term considerations about our own form and performance.

Because, sure – taken in isolation and on the traditional metrics (winning games, competing for a flag, beating teams we expect to win against) this season hasn’t been an unbridled success.

Or even much of a bridled one.

But we need to take a different perspective on things.

Granted, our trajectory on the AFL ladder is painfully slow and, frankly, mainly in the wrong direction.

But at the same time, we are taking great strides up another ladder: the Ladder of Opportunity, as Mark Latham used to call it back in his Labor days.

That’s the (admittedly not actually real) ladder that you scale when you’re a Not Very Good Team, as we are at the moment.

And the lower you get on the (actually real) AFL Ladder, the higher you climb on the (not real) Ladder of Opportunity.

And on the Ladder of Opportunity, we currently sit Fourth – thanks, in part, to Gold Coast leapfrogging us with an unlikely win over the Tigers.

Indeed, the one solace of the weekend was the (nearly) official demise of the Richmond Premiership Era, which kicked off with a bang one hideous September day in 2017 – at our expense – and potentially ended with barely a whimper in a 10-point loss to the Suns in front of a sparse home crowd at Marvel Stadium.

The defeat ultimately knocked the Tigers out of the eight for the second time this season, and they would have fallen further still had the Dockers not stumbled against Carlton in their nominal ‘home’ game at the MCG.

Still, I’m confident Freo are the kind of club that would gladly sacrifice their finals shot to revel in the intrinsic humour of Richmond finishing the round (if not the season) in ninth spot.

There are shades in Richmond’s current plight of us in ’99: having won the past two premierships, they’re widely considered the danger team come September – provided they actually get there.

But as defeat follows bland defeat, at some point, surely, the proverbial ‘Emperor’s got no clothes’ moment will come when we must acknowledge that they’re just not that good anymore.

And ideally, like us in ’99, it will mean they don’t win a flag again for at least a couple of decades, and then some.

Anyway, being happily ensconced near the top of the proverbial Ladder Of Opportunity means you can (potentially) bring in elite talent at minimal cost. And that means that you can Ease The Squeeze (again, as Latham used to say) on your salary cap. 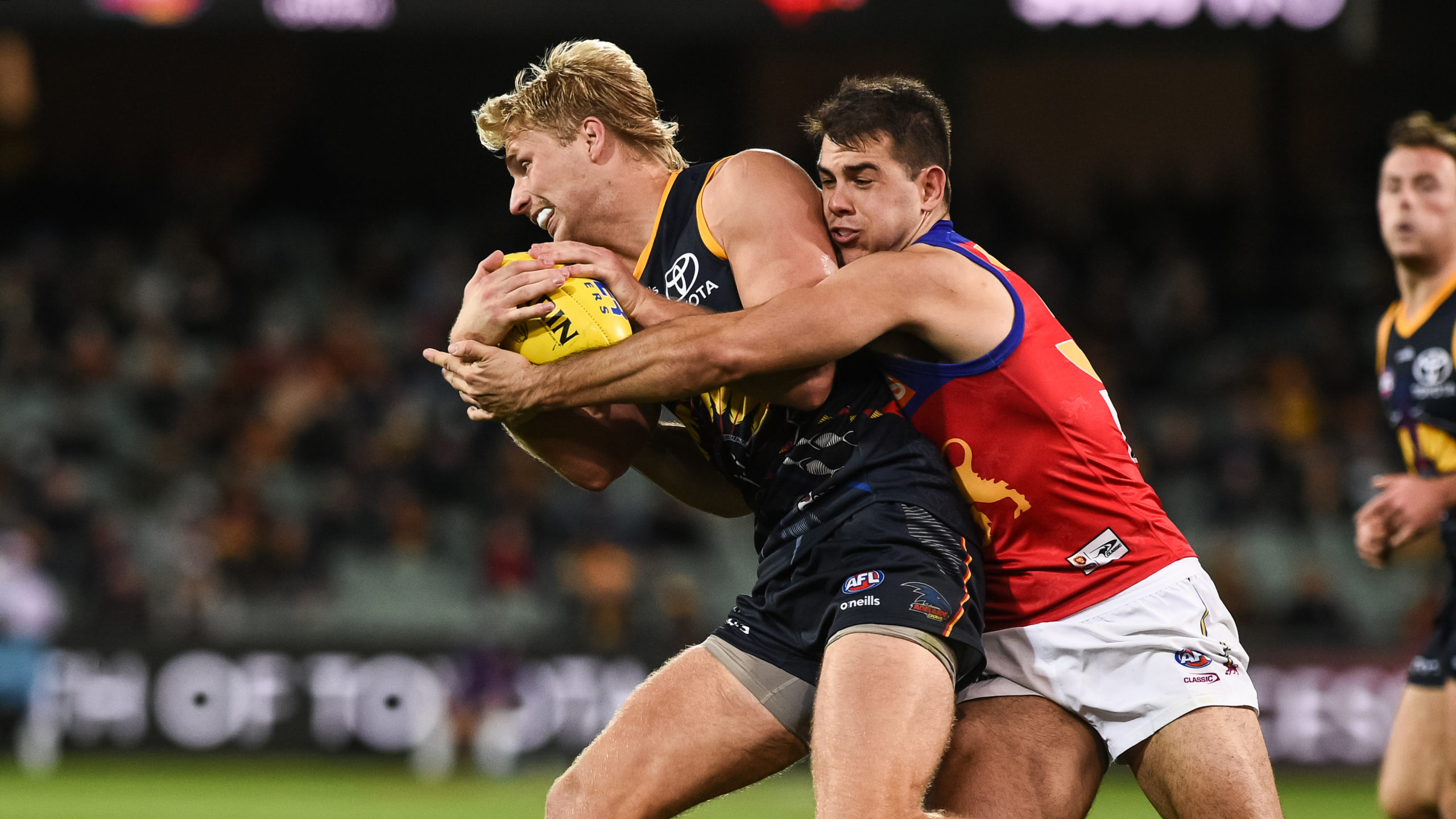 So, as you can see, a heavy loss to Brisbane is actually a Very Good Thing in lots of ways.

Particularly since Port returned to the Top Four on the Actual Not-Made-Up Ladder with a routine win against the struggling Hawks that was forgettable in almost every way apart from Shaun ‘Silk’ Burgoyne playing his historic 400th match.

Given he’d won flags with both teams playing on the night, there was plenty of nostalgia in the lead-up, with his greatest moments fondly recalled, such as a goal-square tackle on Fraser Gehrig to save the 2004 prelim, and his lead-snatching goal against the Cats to put Hawthorn into the first of their three successful Grand Finals from 2013.

If we’re honest though, both of those moments pale in comparison to his single greatest contribution to football – kicking the last goal of the 2007 decider to bring the margin back to an iconic 119 points.

I was quite unreasonably pissed off about this at the time, if I’m honest.

There was, after all, something intrinsically aesthetically-pleasing about the prospective 125-point margin. But as the years wore on, the unique joy of Port’s 119-point shortfall has enlivened our lives in ways we never envisaged at the time. 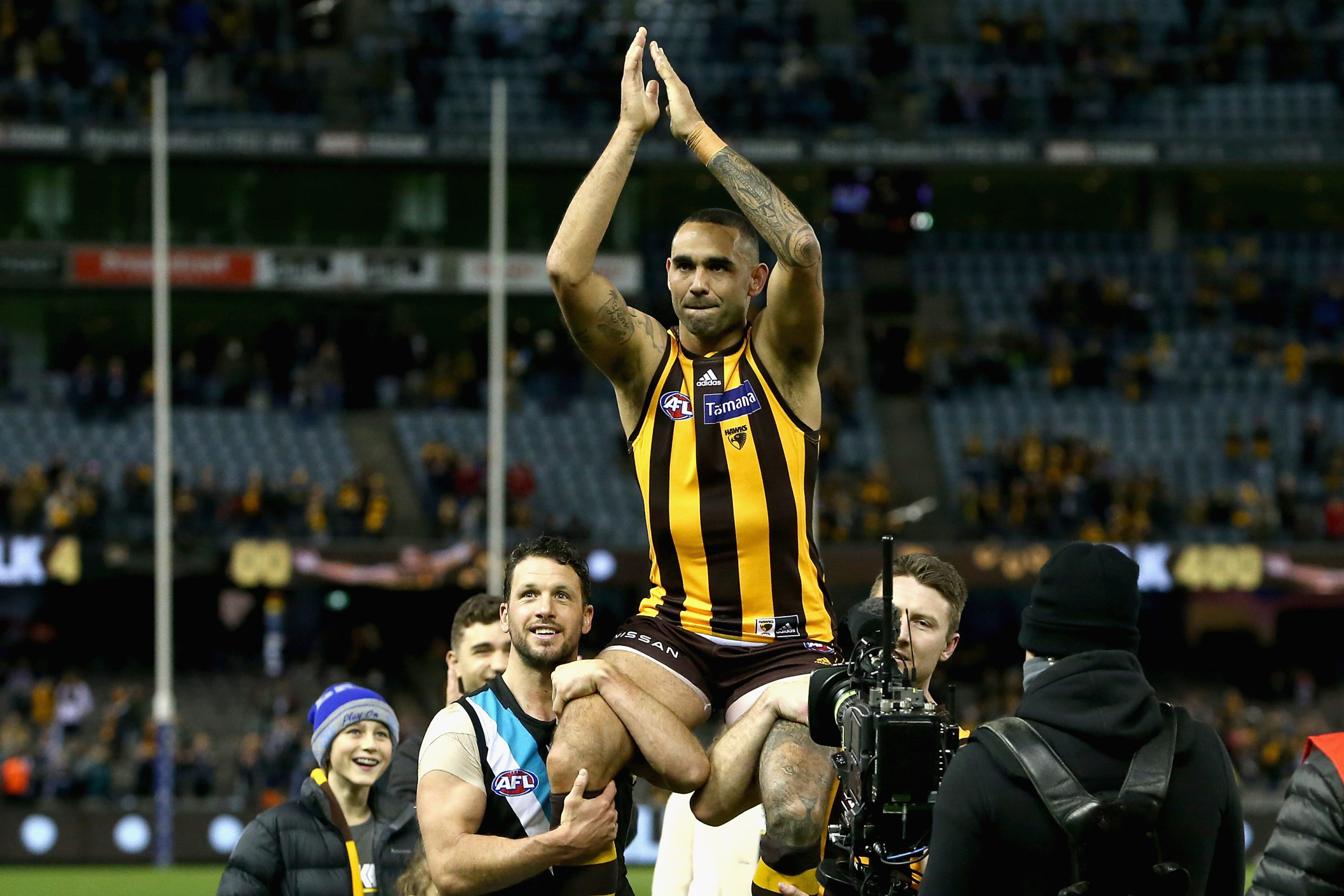 The Power host the slightly-worse-for-wear Melbourne on Thursday with the hopes of exceeding the recently-COVID-curtailed crowd cap of 25,000 (or a ‘full house’, as Port would traditionally call it). So we’ll know a fair bit more about how dire this season is looking by the time next weekend rolls around.

Whatever the outcome, I’ll be cheering on the Lions and the Dogs as we continue our own slow trajectory up the other ladder.

Which doesn’t really exist, but – for now – is about all we’ve got.