Don’t let anyone tell you we’re not improving.

Last week against the Pies, Adelaide put in their worst first quarter of the season, clawed their way back into the game and just fell short.

A week on, and we put in one of our worst first quarters ever against the Saints, clawed back into the game… and somehow actually won. 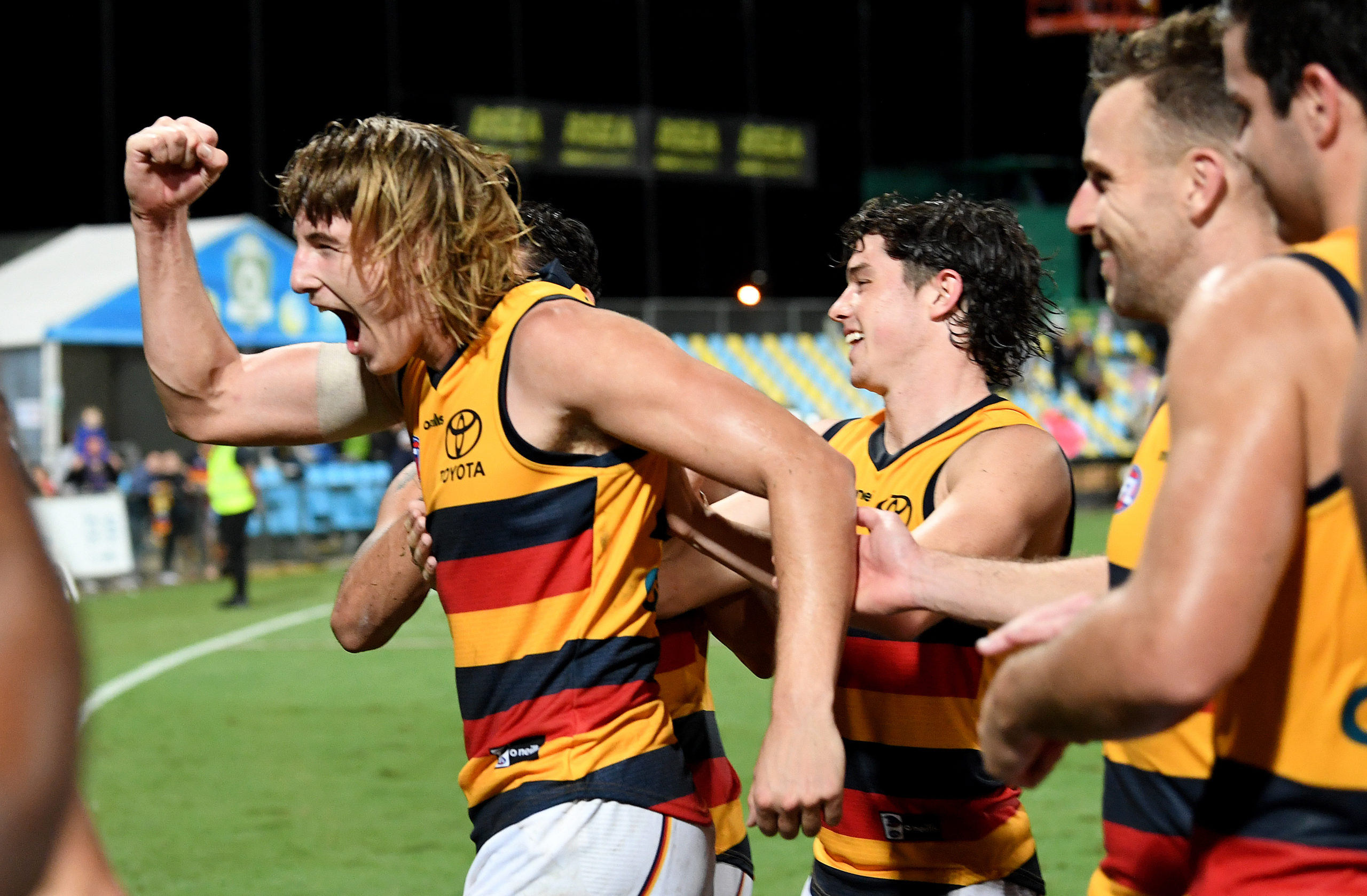 It was a debut to remember for Josh Worrell, with both the comeback win and his haircut harking back to the mid-90s. Photo: Darren England / AAP

In fact, for a game in which, with ten minutes still on the clock in the second term, the commentators were musing about the prospect of Adelaide reaching half-time without a single score to their name, to come back at all was kind of miraculous.

For about 45 minutes, not only could we not buy a goal, we couldn’t even borrow a point.

It was the worst attempt to score since Brad Crouch and Tyson Stengle hit the town post-season.

How bad were we? Well, Brad Hill had nine touches to quarter time, so pretty bad.

For a match played in Tropical North Queensland, it was less Cairns than Can’ts.

But we tightened the screws in the second – spurred by D-Mac’s desperate and controversial collision with Saint Hunter Clark, which has since landed him with an appointment with the Tribunal as the AFL seeks a hefty suspension. 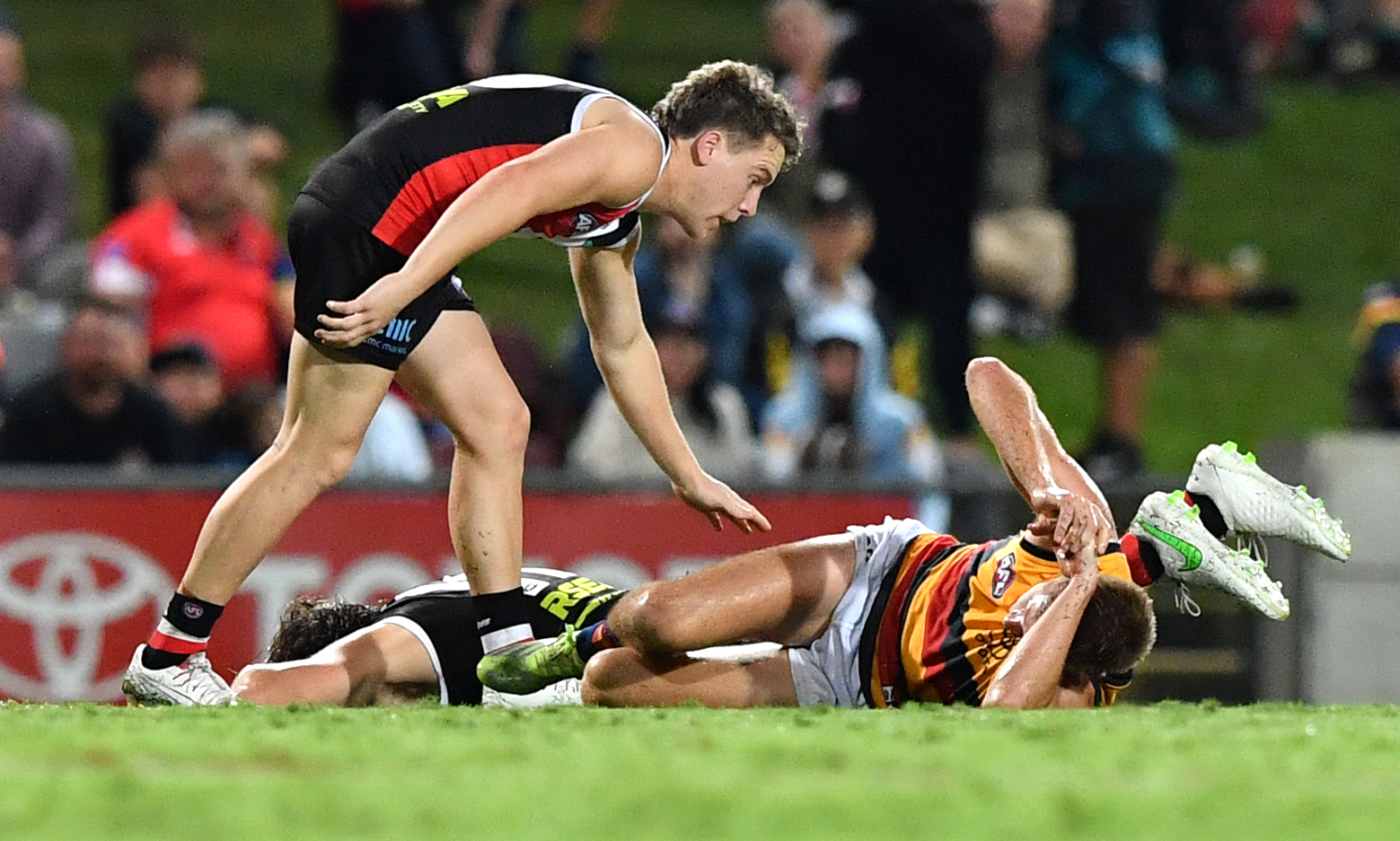 In hindsight, it seems it was always inevitable that D-Mac (or ‘Player Mackay’, as the league now insists on calling him in that pompous faux-legalese they insist on using in these situations) would one day be martyred by the AFL.

Anyway, we started to play to the greasy conditions, turning a potential Chernobyl into a mere Three Mile Island.

But our breakthrough majors were soon cancelled out by a couple of cheap goals to St Kilda, making our comeback attempt seem like the least successful fightback since John Hewson’s policy document of the same name.

And when the aforementioned Crouch kicked the Saints’ eighth early in the third, we were staring at 36-point deficit.

Little could anyone have predicted that Crouch’s goal would be the Saints’ last for the entire match.

And nor could we have foreseen that Riley Thilthorpe, having fluffed a more conventional chance to at least draw level with two minutes on the clock, would then put us in front for the first time – in the 119th minute, no less – by kicking the ball backwards over his own head in the goalsquare, David Rodan-style.

Which at least suggests he could have a bright future as a goal umpire one day. 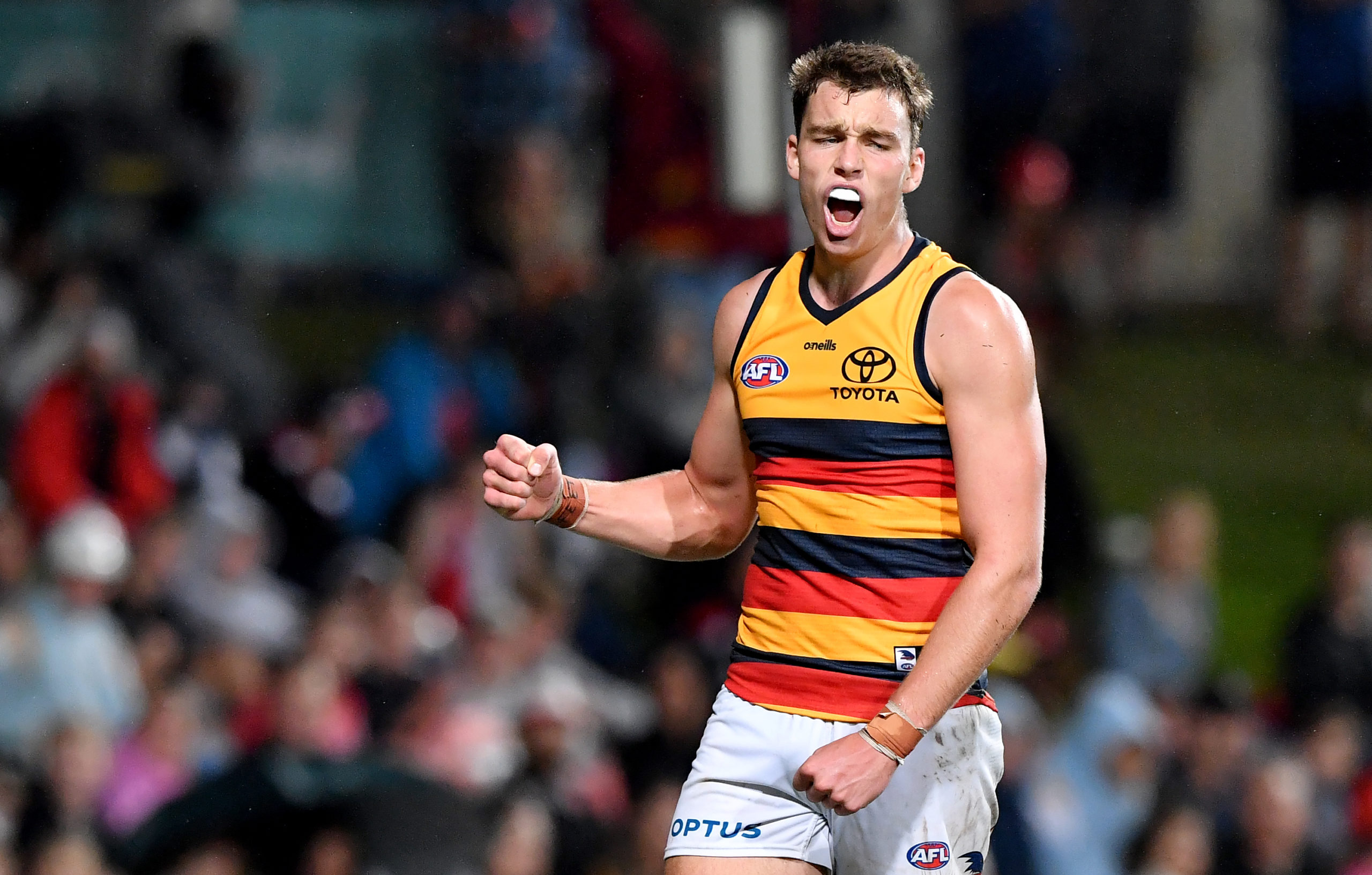 Look, given the scrappy spectacle and the lacklustre competition, it was suggested that this was winning ugly, but the truth is: it was a thing of beauty.

And this season, despite its occasional drubbings and general paucity of wins, has now yielded three of the better victories the Adelaide Football Club has ever produced.

Coming back from a five-goal halftime deficit to win doesn’t happen every day. In fact (and rather unbelievably) we haven’t done it since the preliminary final of 1997, which was a long time ago in a galaxy far, far away.

Saturday’s win, indeed, was one of only three times we’ve been down by five goals or more at the long break and come back to win (the other occasion being against the Hawks in ’95 when, aptly enough, the Crows similarly went goalless in the first but fought back in wet conditions before a young future star in his debut season kicked a miracle goal with a minute left).

Ideally this means Thrillthorpe will similarly win two Norm Smiths in back-to-back premierships within the next three years.

As for St Kilda, it meant they’re pretty much out of contention for the major round, and the backlash has been savage, with Crouch lamenting that “the way that we’re playing at different times is a bit frustrating”.

“I want to get back to playing good finals footy again and being in a successful team,” he said.

Oh wait… actually, that was what he said during the pre-season after he left Adelaide.

Who currently sit one rung higher on the AFL ladder than the 13th-placed Saints.

Anyway, the game was an appropriately bizarre finale to a decidedly odd week, which saw Nathan Buckley join a long line of coaches – including Schimmelbusch, Walls, Laidley, Hird and of course Blight – to lose their job after their side had played the Crows.

Of course, traditionally it was after a loss, but no matter.

Collingwood obviously do things differently these days, and the gambit paid off, with Bucks getting what everyone agreed was a ‘fairytale sendoff’, which is almost as good as actually keeping your job.

It was an emotional day, with the outgoing coach being presented with a special gift to honour his decades of service to Australian football: a patch of grass cut out of the SCG surface.

The Pies’ win against Melbourne had many highlights, not least of which was John Noble going in for a poignant ‘bro’ handshake post-game, but being left hanging too long and having to pretend he was just scratching his nose instead.

It also meant we can no longer boast being the only team to beat the Demons this year, even though every other team seems to have trouble managing it.

Buckley’s being replaced, for now, by his assistant Robert Harvey, which – to be clear – I’m not claiming is some kind of omen, I’m merely pointing out that he won Brownlows in both our premiership years, and that good things have historically happened to our club when he receives individual accolades. That’s all.

The Crows also locked away some key signatures during the week, with a much-anticipated, high-profile contract extension for Darcy Fogarty somewhat overshadowing the less-anticipated, lower-profile one for Lachie Murphy.

Both new deals were announced in that way clubs tend to do these things, with a media release that reads like the players are reciting a prepared statement in a hostage situation.

It was a big week for The Fog in Adelaide, with our Number 32 also apparently somehow preventing Geelong from flying back to Victoria on Friday night.

(Although it’s possible the Cats players were actually just trying to defect to the world’s Third Most Liveable City™, Bolshoi Ballet style.)

Former Crows turncoat Paddy Dangerfield showed his penchant for an inappropriate idiom by telling reporters that “the fog is obviously not enabling us to fly out, so it’s all very much up in the air at the moment”.

Or not, as the case may be. 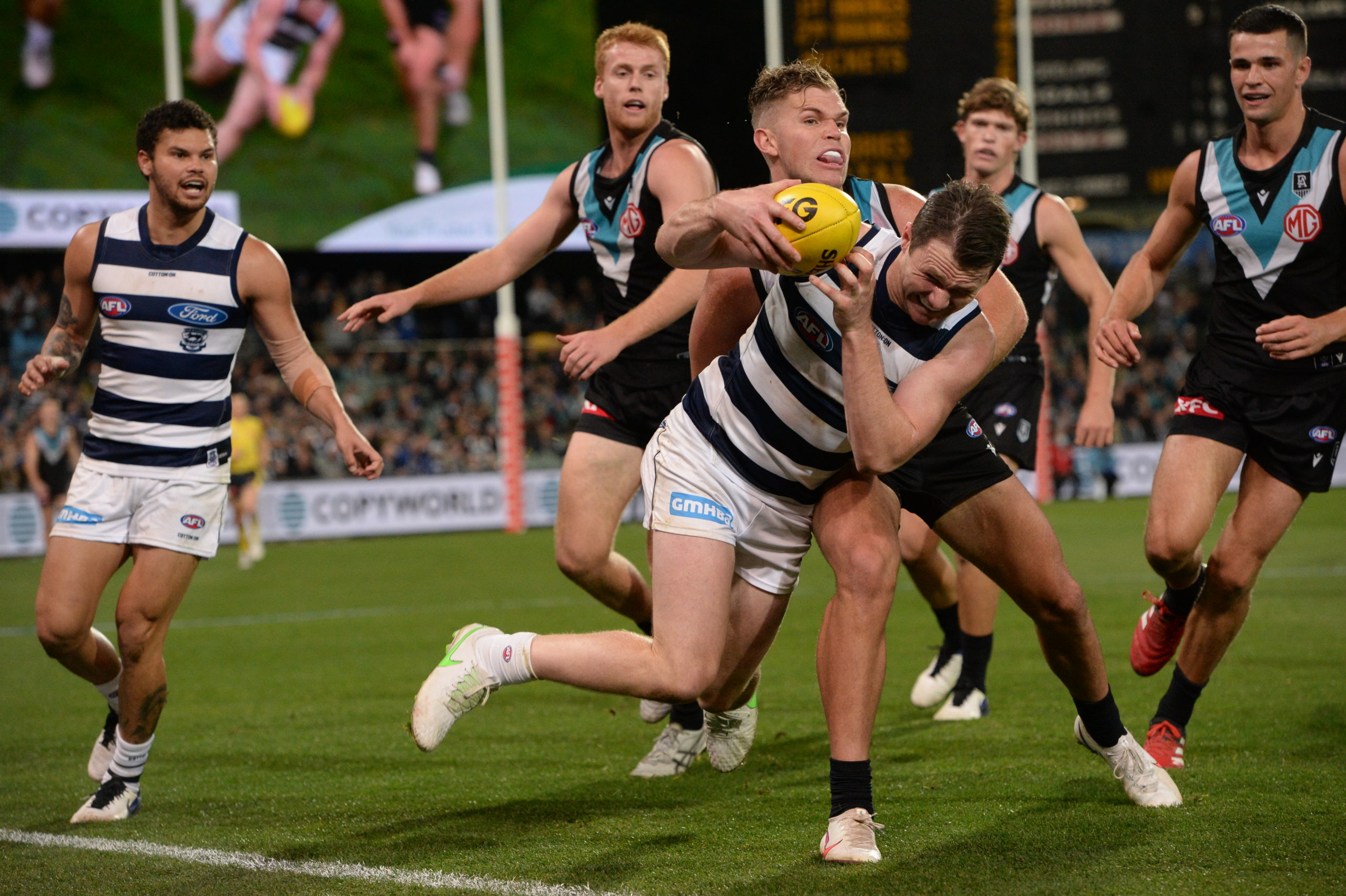 The Cats, of course, were in town to play Port in their annual bout to decide which team is the better of two evils.

Splendidly, the less evil team prevailed, no doubt inspired by the gentleman in the crowd sporting the home-made ‘119’ guernsey, which really should be made widely available.

The Power extended their losing streak against fellow top eight sides at home, leaving the Port brains’ trust with a few things to ponder.

Still, while they may struggle with top eight sides, they only play another three of them from their next ten starts, so we’ll probably have to grapple with the reality that they’re not merely finals-bound, but likely top-four bound too – despite being reassuringly average.

But all in all, the perfect long weekend really.

A day after our Cairns comeback, we were somewhat upstaged by West Coast’s own fourth-quarter blitz against the flailing reigning Premiers Richmond, in which Luke Edwards – who is the son of Crows great Tyson, and who the club opted to pass on as a father-son prospect for reasons never particularly well explained – racked up 27 mostly-effective touches, including 11 in the final term.

Now, as you may have noticed, we don’t go in for Schadenfreude much here at Fumbleland, but Edwards turning out to be good really put a dampener on the rest of my weekend, if I’m honest.

But we were the only ones who appeared to actively spurn him – and instead the Eagles nabbed him with a fourth-round selection they received in a trade with Sydney, who (to further rub salt in the wounds) originally got it from us.

Perhaps the most annoying aspect of it is the prospect that we might have to spend the next ten years watching this guy become an elite footballer. Now I know how Freo must have felt when McLeod kicked that matchwinning goal against the Hawks in ’95 – and, y’know, for a decade and a half after that as well.

And at least they got Chris Groom for their troubles.

But there’s a consolation here too.

For while we shouldn’t let anyone tell us we’re not improving, at least we can always still find things to complain about.

Touch of the Fumbles, InDaily’s shamelessly biased weekly football column, is usually published on Mondays during the AFL season. It will return in a fortnight.