Let’s face it, we were risible from the get-go against a side that have been a rabble for much of 2021.

We gifted them goals through turnovers all night and couldn’t convert when the opportunities presented.

So it’s pretty clear where the fault lies.

After all, if the state’s health authorities hadn’t decided to let the sweatmen from Covidtown over our state lines, none of this debacle would have happened.

Eyebrows were certainly raised when SA Health put aside their usual sports-sceptic approach to allow Collingwood’s players and staff into SA for Saturday’s whatever-the-opposite-of-a-blockbuster-is.

It’s not clear what prompted the usually-hardline health authorities to suddenly adapt their outlook; perhaps they mistakenly believed they were providing an exemption for Port’s reserves team to return home from a mid-season footy trip or somesuch?

Anyway, the game could go ahead, but with some strict criteria, including SA Health advising all attendees to do whatever they could to avoid touching the ball if it happened to come near them.

They even helpfully released a handy guide of what to do if the situation arose:

The advice was, of course, the brainchild of our indefatigable public health doyen Professor Nicola Spurrier, who spent time last year monitoring the goings on at football games held at Adelaide Oval.

From her tireless research, she had gleaned that “occasionally [the ball] does get kicked into the crowd”, which is sort of like the in-game equivalent of crossing state borders without an exemption.

And frankly, I blame Ned McHenry.

So, Professor Spurrier’s advice for anyone in the prospective path of this public health nuisance?

Naturally, everyone took this warning extremely seriously and those attending the game arrived fully intending to comply with the edict.

The unfolding public health emergency of the leather peril prompted reports authorities planned to seize and remove the game balls if they did make contact with the public, after which they would presumably be quarantined at a specialist new facility for the next 14 days. 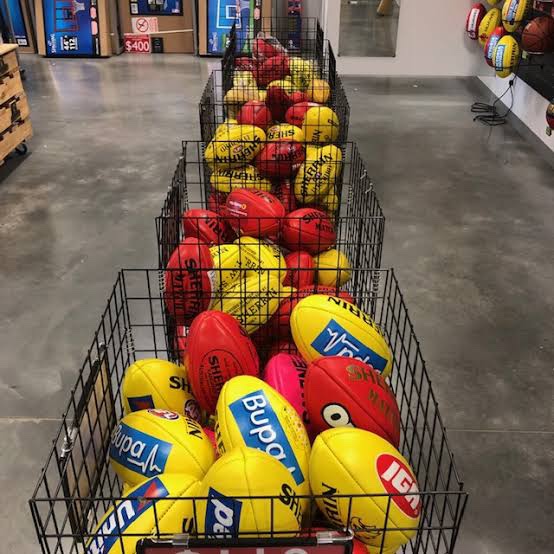 Unfortunately, however, once the game actually started it seemed the attendees most keen on following Spurrier’s advice were the Crows players, most of whom were not merely avoiding the ball but keeping a respectful social distance from the visiting Collingwood team.

Mind you, by this time Saint Nic had already walked back her original advice, suggesting it was actually “tongue in cheek”.

The erroneous advice, she said, came about because of her general lack of football knowledge – something she had heretofore managed to keep extremely well hidden.

The new, improved advice was that it’s fine to touch the ball – as long as you are aware that you are effectively handling a pulsating cesspool of bacterial menace.

Apparently, the SA Health team’s intensive research had led to the conclusion that physical activity causes its participants to perspire rather profusely.

Thus, Spurrier noted, the game ball “is an object touched by I-don’t -know-how-many very sweaty men on a football field”.

So the new health advice?

I do hope Melburnians appreciated the lengths to which South Australia was going to keep them all entertained during lockdown.

Fortunately, however, our very public-health-aware Crows players did their best to avoid breaking a sweat for much of the first quarter, leaving the ball relatively uncontaminated.

Which was lucky, since my traditional seats on the third row were suddenly given marquee status after health authorities cleared the first two rows.

But it only added to my creeping conviction that, for the first time in all the years I’ve gone to the football, this would be the game in which the ball would finally come straight to me and I wouldn’t know whether to duck, mark or spoil, and would thus embarrassingly fail at all three, and that because of everything that had happened in the preceding week the vision would be replayed on national TV for days and days thereafter.

But luckily that happened to this guy instead.

(Although he handled it – or not, as the case may be – far more deftly than I envisioned myself doing.)

So, it was an appropriately bizarre week.

For a while there, it felt like we were stuck in some strange game show in which they ask Dane Swan questions about public health and quiz Nicola Spurrier about football.

Though, to be fair, our chief public health officer regularly getting asked about AFL fixtures is really one of the very few highlights of the pandemic era. 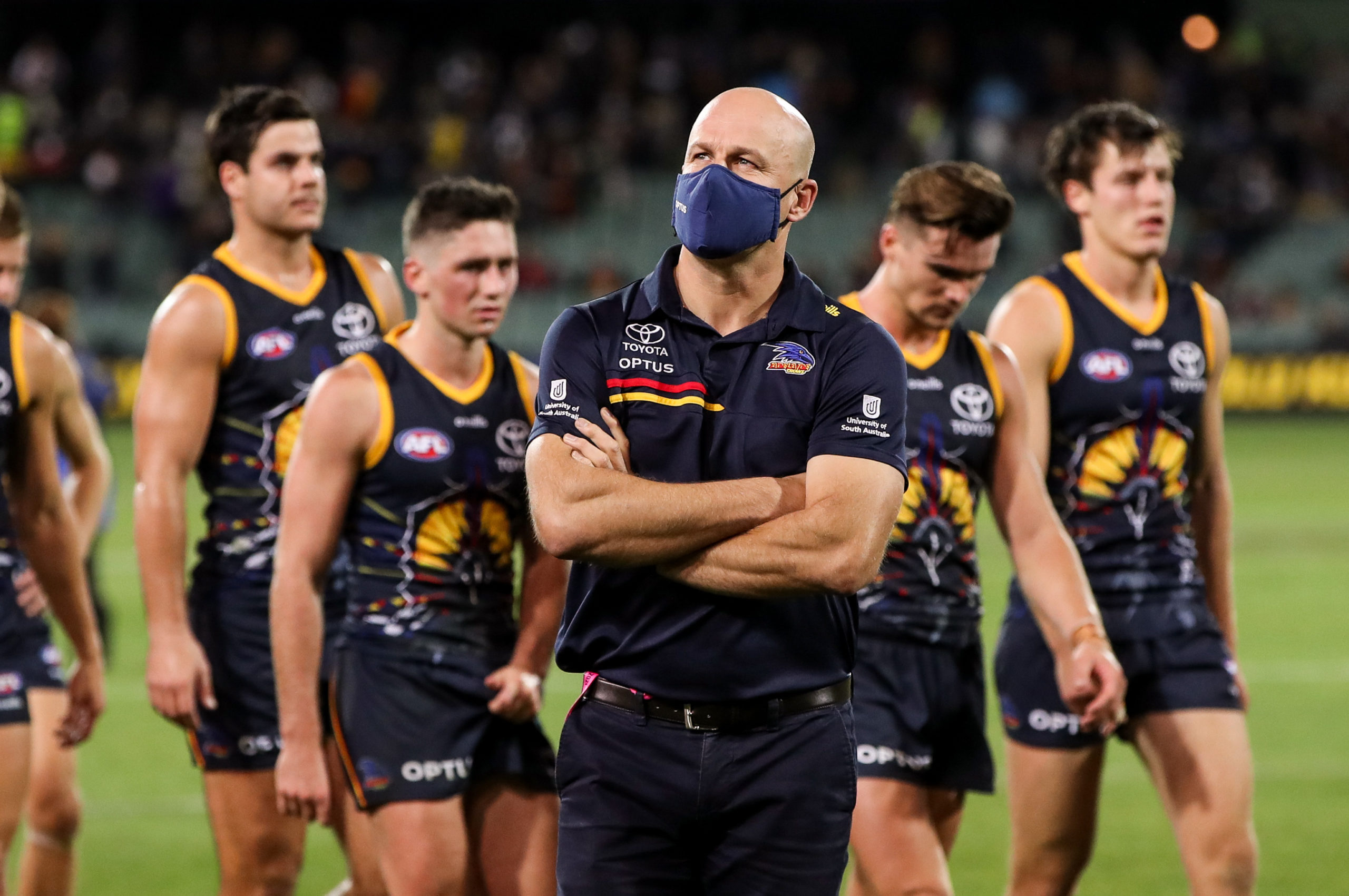 The loss was so bad, the Crows didn’t want to show their faces afterwards. Photo: Matt Turner / AAP

But the build-up to the game almost overshadowed the game itself, and it certainly overshadowed the mid-week mid-season draft, with the AFL reviving the event in order to give fans an extra chance to get outraged about their club drafting a player they’ve never heard of or seen play.

Adelaide picked up an interstate-born kid called Paddy, which always ends well for us.

They helpfully posted a shot of him before his first SANFL game, which was a nice moment even if he looked like someone waiting to get his ball autographed.

There was plenty of talk about ex-Crow Tyson Stengle finding a new home in the mid-season draft after parting ways with Adelaide following various misdemeanours, but he didn’t end up back on an AFL list.

Still, drafting new talent following a couple of decent showings against good sides in recent weeks meant that there was once again a positive vibe around the Adelaide Football Club.

Which, according to a little-known club rule, meant that they had to do something stupid to ruin it, again.

After a brief investigation, the AFL fined the Crows $50,000 from their football department soft cap for breaching COVID mask protocols on the flight back from Sydney last week.

Personally, I would have been on board with them docking all our premiership points instead.

Because if there’s one thing we could glean from Saturday’s hideous loss, it’s that another good high-end draft pick or two certainly wouldn’t go astray (well, they might, but we’ll cross that bridge when we come to it).

I’ve become aware of the odd missive on our letters page unhappy with the general approach here at Fumbleland, which is to not discuss football enough, or to discuss it too much, or something; I forget.

But I did consequently promise my boss I’d write a very serious and balanced article this week focussing entirely on the events of the current round.

Anyway, there was no sugar-coating the loss, other than to acknowledge that if we absolutely must lose at home to a team wearing black and white stripes, this is probably the best way to do it.

Fumbles has obtained an exclusive transcript of coach Matthew Nicks’s damning post-match address, which succinctly sums up where it all went wrong:

I don’t know about you blokes but I can’t bear fucking losing a game like that! Look, fantastic effort but what does a fucking fantastic effort mean? It doesn’t get us anything! We don’t get diddly squat! We don’t get a point. They don’t just give us something for just fucking getting close! It means nothing… I don’t know about you guys, but if I see one bloke walk out of here, getting a pat on the back from people out there for a good effort, I’ll spew up! Because it’s just not acceptable! We were a rabble in that first quarter, absolutely bloody disgraceful. Absolutely disgraceful. Yeah, for three quarters we worked our arses off, we worked our backsides off to get back into the game, but the game is about 120 minutes of footy, and that was the most winnable one that we get for a long time, and we just pissed it down the drain. We absolutely pissed that game down the drain. Don’t any one of you forget about it.

Actually, wait – no, sorry, that’s a transcript of Terry Wallace’s speech from Year of The Dogs in 1996. (Also after a loss to Collingwood though).

But anyway, it still summed things up nicely.

(It’s also quite cathartic, except for the bit at the end of his speech where he says “we’ll see you back at the social club” because, of course, we don’t actually have a social club.)

The consensus from a few people on the bus I caught home was that we did not kick enough goals, which ultimately hurt us.

But for me, I was strangely philosophical about it all.

Maybe it’s on account of winning the wooden spoon, which kind of puts things like this into perspective.

Back when we were Actually Good, a loss like that would have really pissed me off.

These days, though, I respond to such moments of adversity calmly and rationally.

These days, I’ll simply shrug, mutter something about “draft picks” and get on with my weekend.

I imagine it’s much the same sense of perspective you might get after you win a flag. Except much, much worse. 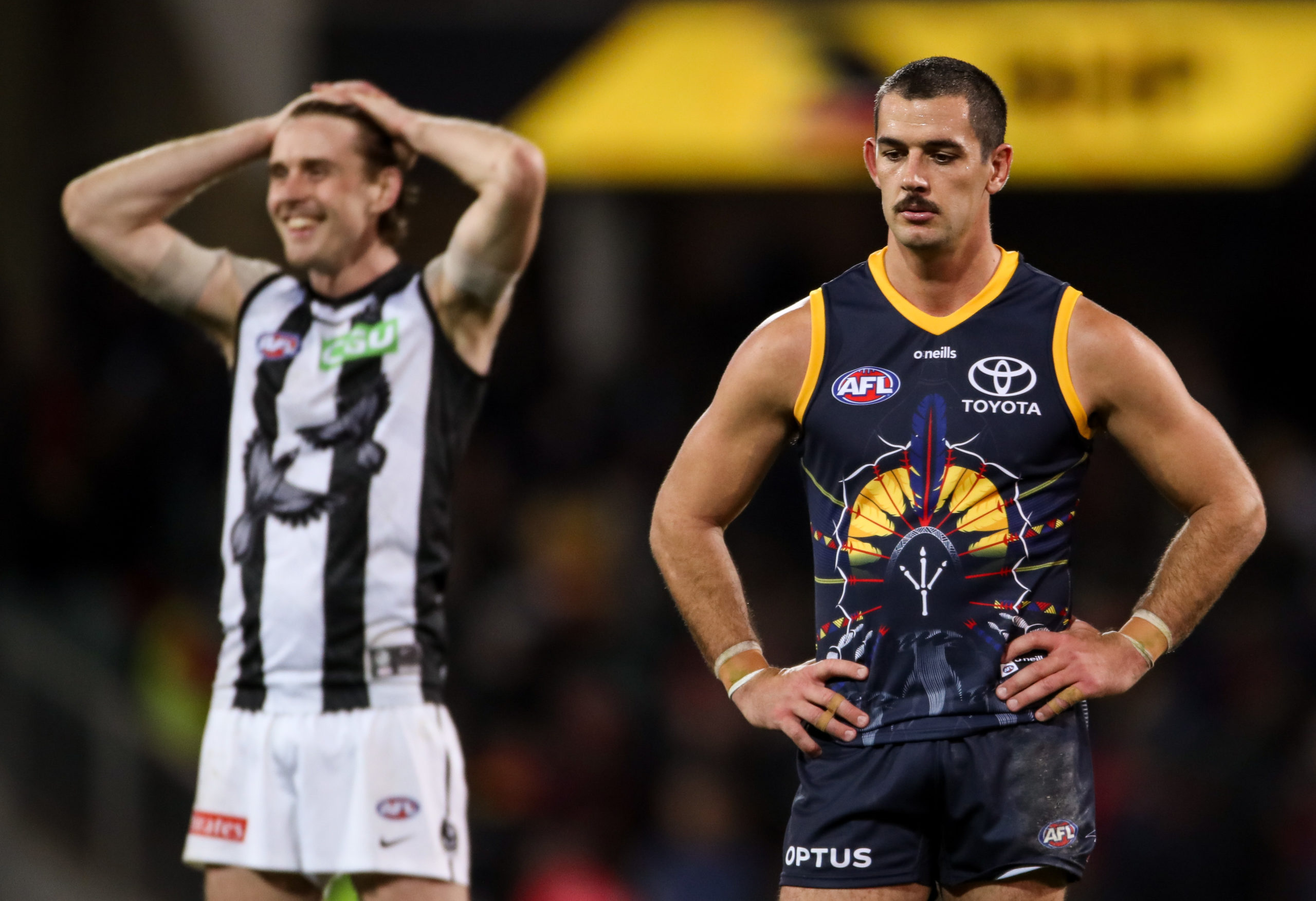 So when the game was on the line at the death and a supporter behind me was shrieking at Sidebottom to “grow some hair, Steele”, I felt impassive.

Later as the Footy Express wended its way through town and the high-spirited (but annoyingly tuneless) singing of the Collingwood faithful filtered in from outside, and the older lady in front of me loudly pondered if “anyone has got a homemade bomb we can throw out the window”, I simply shrugged and donned my headphones.

I was the epitome of Zen.

For, as I’ve already pondered, our best case scenario this year was always to have a season like the Lions in 2017: to hardly win a game but still end up with everyone agreeing how much you’ve improved, at which point you’ll pick up a star recruit or two and never look back.

Although, to be fair, I’ll admit I woke up the next day and realised I was actually quite pissed off about it after all. 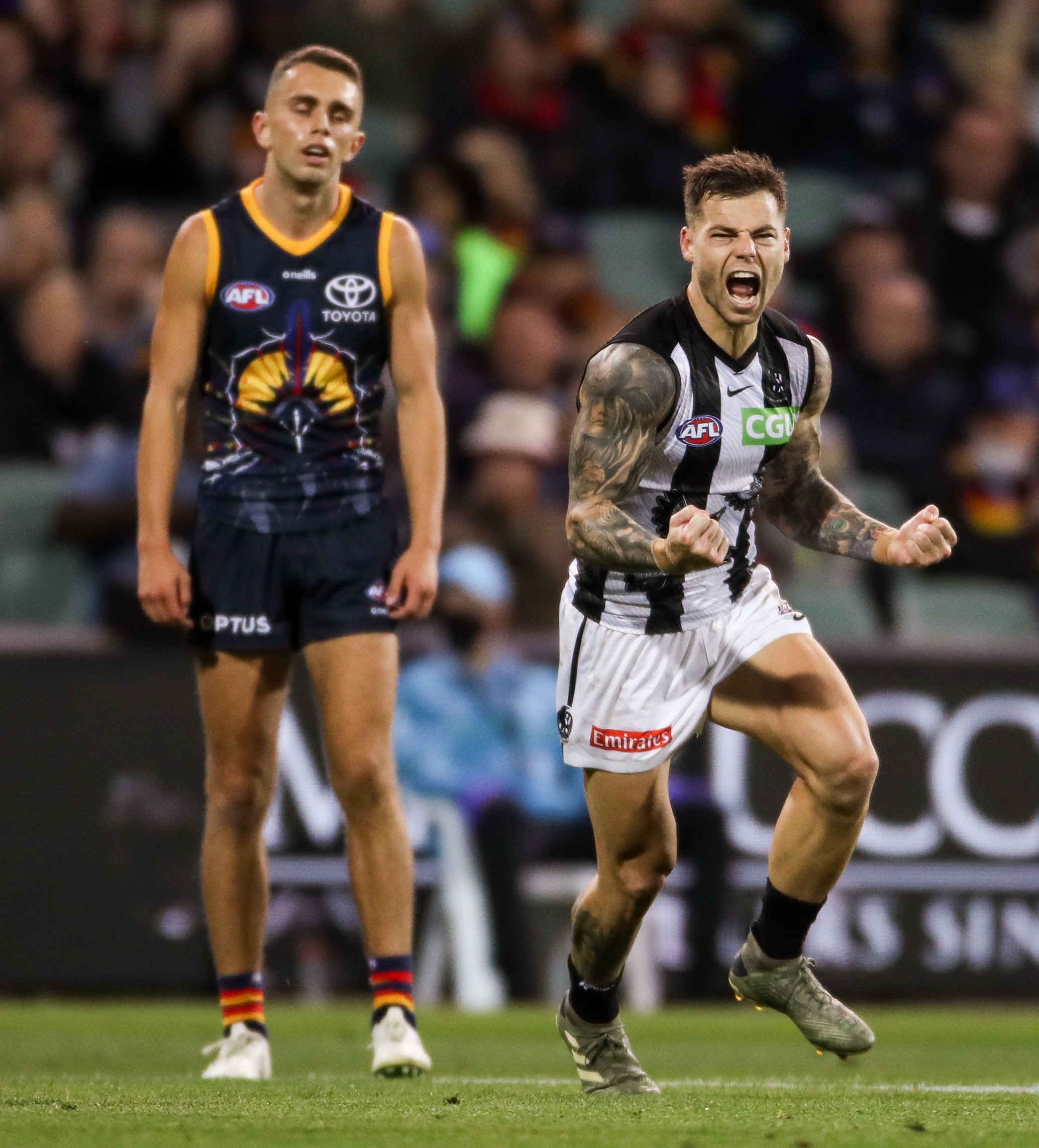 Lachie Sholl sums up my expression after the game. Photo: Matt Turner / AAP

I mean, losing at home to a team with two wins from 10 games isn’t just intrinsically bad.

It’s also the kind of intrinsically bad thing the Crows have been notoriously inclined to do for the last two decades or more.

Still, at least Port had the bye.

After a generally cringeworthy week, I’ve rarely been more relieved to be able to avoid the possibility of a Power win.

Although I’m sure all their supporters still enjoyed the weekend regardless.

They’re playing the Cats this week though, so I can only hope the Port players follow the same sage public health advice that our players demonstrated so admirably: