It’s hard to avoid the Richmond club song these days.

For starters, we had to endure it being played on repeat for what felt like several days in the aftermath of the 2017 Grand Final.

And even if playing it incessantly on Gold Coast mind camps isn’t your thing, the fact the Tigers have won far more games than they’ve lost in the years since has meant we’ve had plenty of opportunity to hear what many claim is one of the better anthems in the AFL (not me, though, I always felt it was overrated).

Anyway, the irony of the song is that bit where they talk about being like the Tiger of old.

Because, to be frank, I really quite miss the old Tigers.

The Richmond I remember fondly is the team who roared back from almost six goals down against Geelong in 2003 and hit the front in the dying minutes, prompting wild celebrations in the course of which captain Wayne Campbell sustained a season-ending achilles injury, and after which Geelong kicked another goal to win the game anyway.

In a word, then, they were hapless.

And sort of endearingly so. 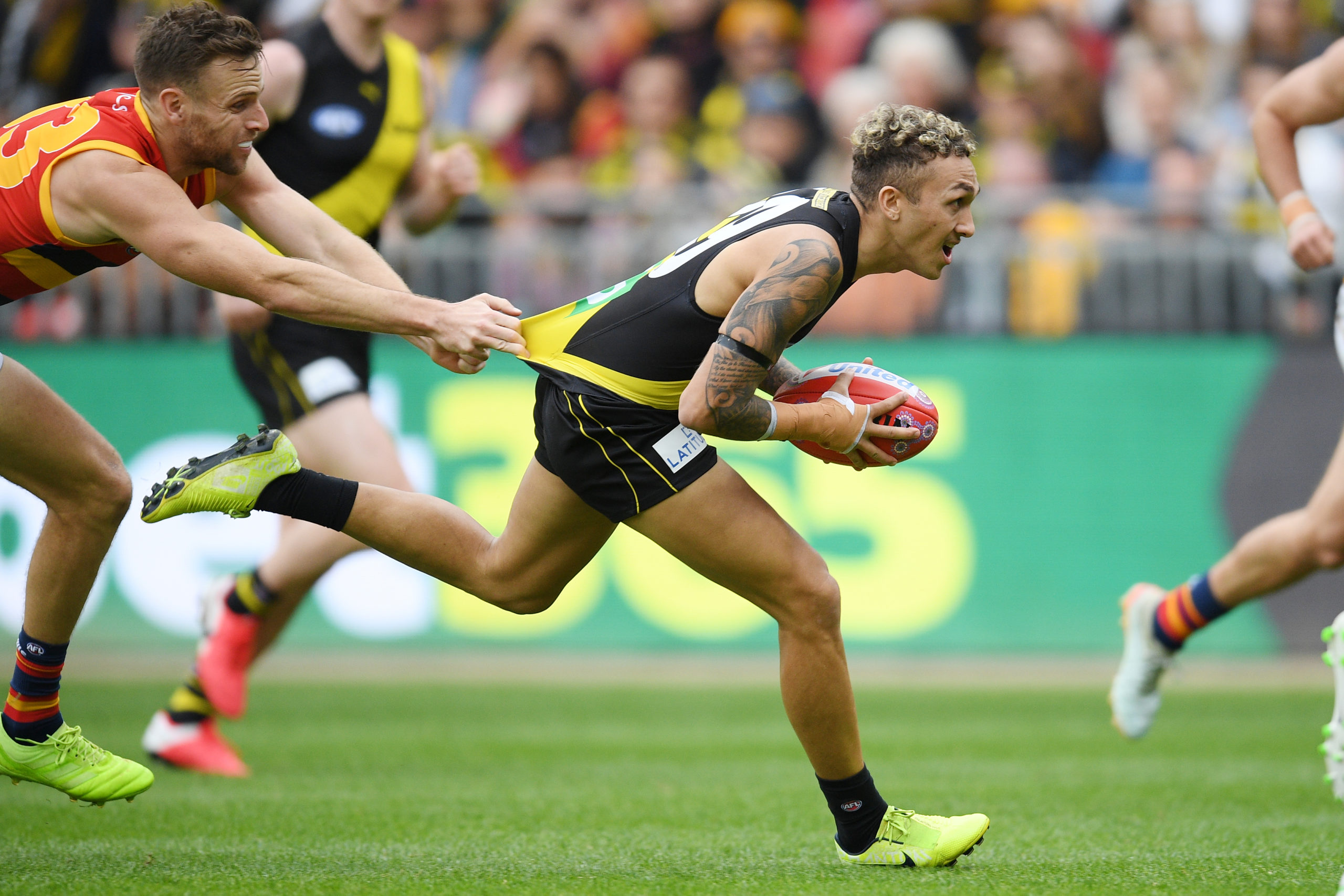 Not any more, of course. Photo: Dean Lewins / AAP

Indeed, I wrote as recently as May 2017 (2017, FFS!!!) that “I tend to have a good vibe about playing Richmond”, for no particular reason beyond the mere fact that “over the years I tend to associate them with heavy defeats”.

Which I still do, of course, but sadly not in the same way.

These days, they are unfortunately more happy than hapless.

(And, ironically, the traditional ‘happy’ team of Hawthorn may want to consider swapping that particular lyric in their club song for the more apt ‘hapless’, at least for the next few seasons.)

But in hindsight, it shouldn’t have been all that surprising that the Tigers went so quickly from being a figure of ridicule to instead dominate the competition.

I mean, we were warned decades ago that the forces of evil would be marshalled by a guy named Damien.

The event that prompted my mildly smug reflections on Richmond’s competence in early 2017 was our 76-point round six thrashing of them at home, which at the time sent us clear at the top of the ladder.

Unfortunately, as good teams are wont to do, they learnt some important lessons from the hefty loss: most importantly of all, don’t play Adelaide at home during the finals.

Which, to be fair, they studiously avoided (though we’ve helped them considerably in each of the ensuing years by not actually qualifying for the major round).

But, conversely, it’s fair to say playing Richmond at the MCG is not really our thing either.

So this week’s hasty change of setting to the Giants’ home ground in Western Sydney was a promising start, particularly given that until yesterday we were yet to lose a match to the Tigers at that precise venue.

The shift was prompted by the fact that SA had helpfully kicked off a lockdown-inducing COVID cluster in Victoria before even more helpfully shutting our border on them.

We should probably consider finally calling it even for the Grand Prix now, I guess.

After all, Victorians deserve our sympathy, if not our apologies. Imagine being locked down in Melbourne and the only decent footy game all weekend is an Essendon win!

Still, it wasn’t just Victorians caught up in the drama.

Port Adelaide players and supporters were told to self-isolate away from other people last week, which was tough on them but, obviously, everyone would agree it was the right thing to do for the good of the wider community.

And once I heard it was related to a COVID outbreak, it made even more sense. 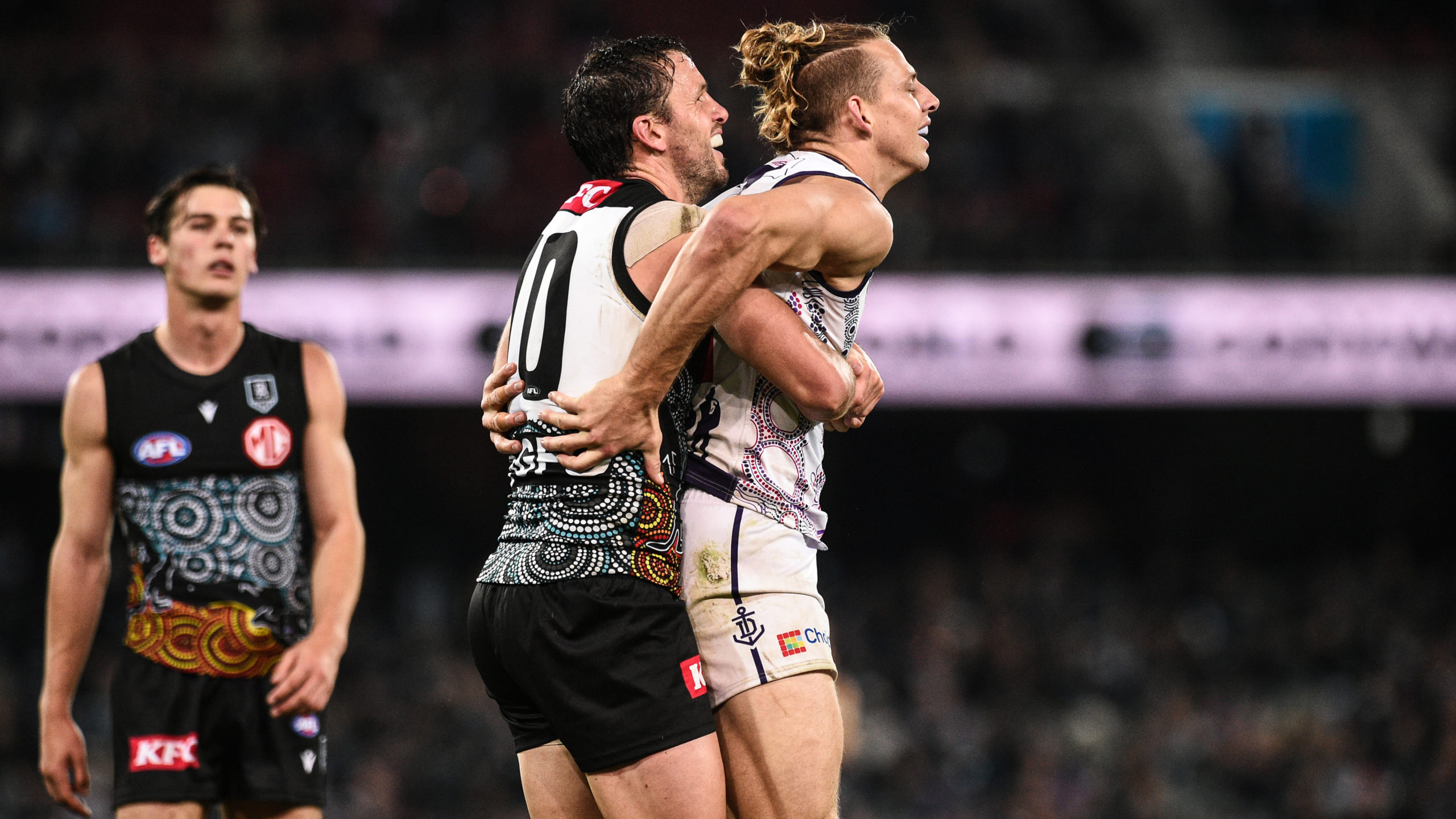 After a week of social distancing, Travis Boak had had enough. Photo: Michael Errey / InDaily

Still, it was sadly short-lived, and they were back mingling with the rest of society in time to launch their Indigenous Round guernsey, again.

But putting aside the COVID-inspired circumstances, there was some enjoyable irony in the fact that just days after Damien Hardwick had whinged about playing home games at Marvel Stadium because none of their supporters could get there, they had to play one in front of a bumper crowd of 4236 at Giants Stadium instead.

Still, at least it kind of made up for the time they made us play our home 2002 Wizard Home Loans Cup semi-final against them at the MCG.

Which incidentally, was the same year we also had to play an actual home semi-final at the MCG as well, and while I was mighty pissed off about that fact at the time it turned out to be a classic game in which we built a solid lead against Melbourne in the first term, went to sleep for the second and third quarters before storming home again in the last.

Which I mention only because that’s much the same way it went down against Richmond yesterday.

Except that this time, of course, we let them kick the last three goals of the match and win relatively comfortably.

Still, as with most of our losses this year:

The very fact of the final-term fightback was more than we would have generally expected, and when we got within nine points with almost ten minutes to go it seemed briefly realistic to ponder that there was time enough left for a final flurry of goals.

Which there was. Just not by us. 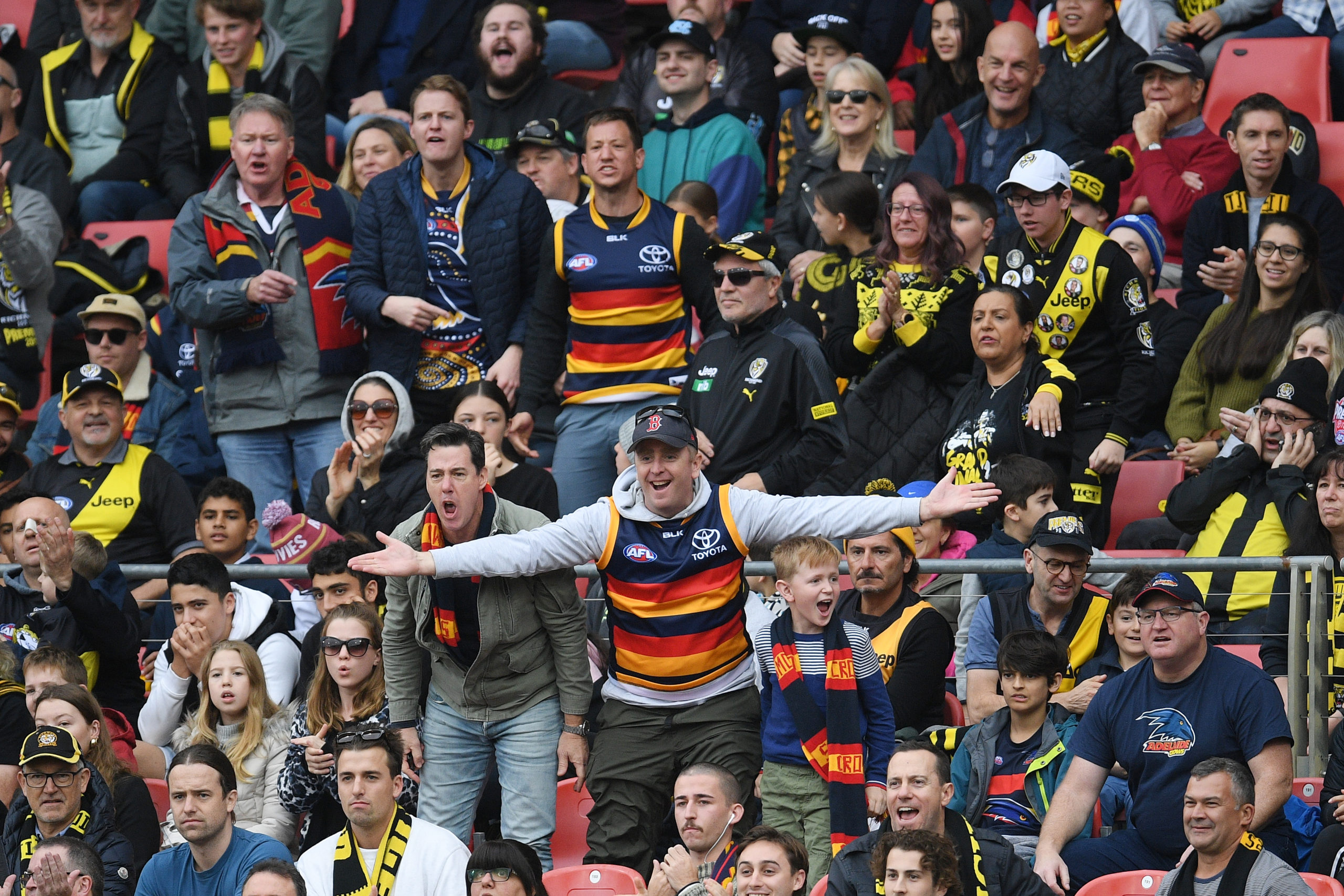 Still, lucky we weren’t at the MCG I guess.

As recently as late last season, I had Richmond – and deservedly so – not so very far behind Port on my list of ‘most hated teams in the AFL’.

Both, after all, had recently managed to ruin one of my theretofore much-loved songs; indeed, one of my life’s enduring debates these days is whether The Killers or INXS has become more unlistenable.

Still, it’s apt that Port have managed to ruin INXS, given they have a few things in common with the Aussie rock icons.

Both, for instance, have proved surprisingly average but appear better than they are because of one or two standout players.

And both are constantly trying to cash in on their history. 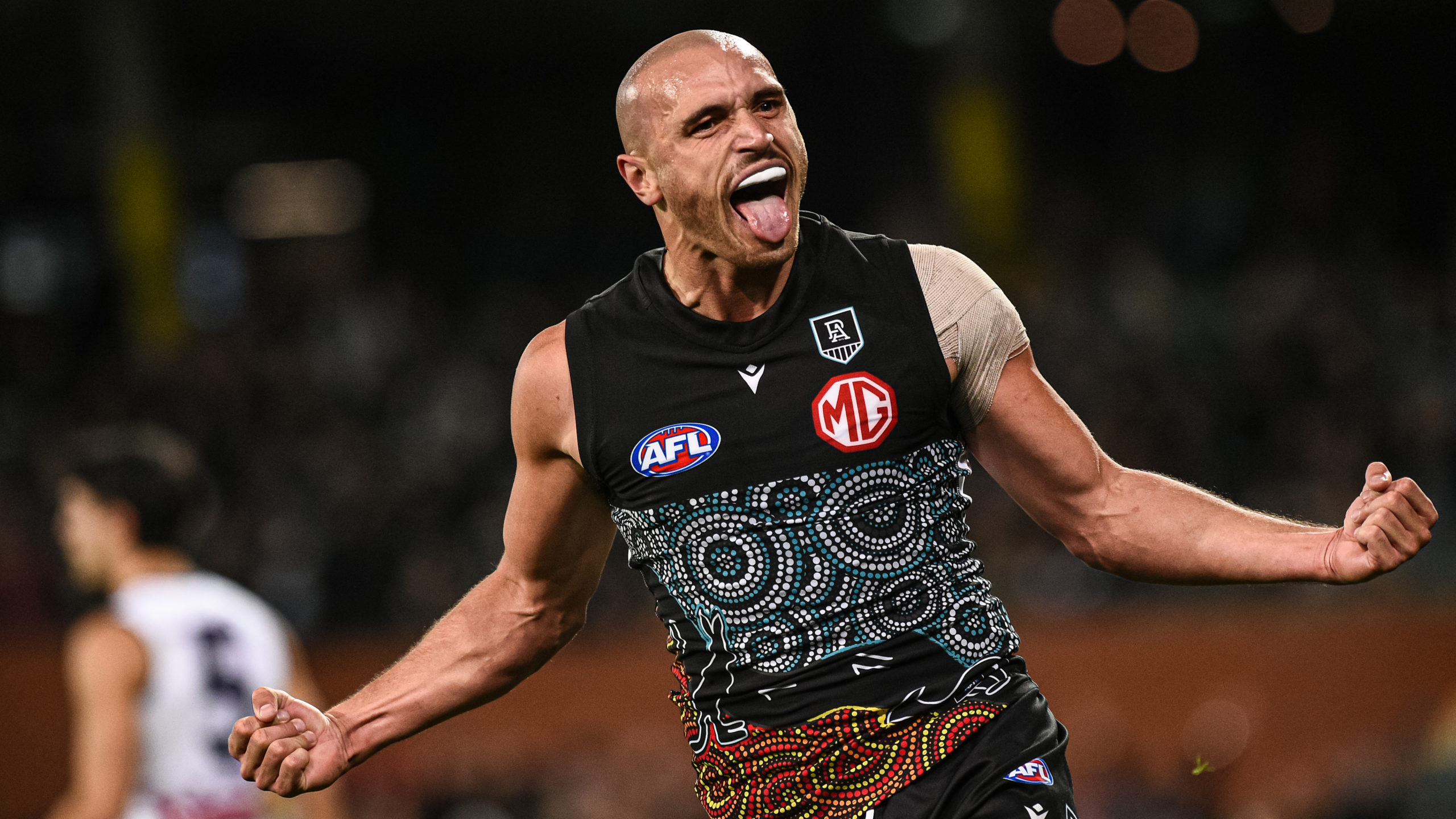 Sam Powell-Pepper celebrates one of his three goals in Indigenous Round. Photo: Michael Errey / InDaily

Because I have something to confess.

Something deeply personal and intensely troubling.

(Whisper it): I’m not sure I really hate Richmond all that much any more.

One of the biggest regrets of the 2017 Grand Final was the general assumption that we’d blown it; that we’d simply played a stinker against what was effectively an inferior side.

But subsequent events have pretty much blown that theory out of the water.

Still, I’m petty enough to overlook the fact that the Tigers are actually a decent side that probably deserved their premiership success, so that’s by the by.

No, my newfound revisionism is more just a confluence of circumstance.

Since late last season, there have been several matches in which I’ve found myself having to barrack for Richmond as the least bad option.

The prelim against Port. The Grand Final against Paddy’s Cats.

That round four rematch against Port.

And over the course of it all…

I mean, you can’t – for instance – deny that someone like Shai Bolton is just a joy to watch in full flight. He also didn’t play in the 2017 Grand Final, which also helps.

And then there’s Bachar Houli, a guy so nice he apologises to the umpire for failing to hear a play-on call that costs him a dubious free kick.

And then, of course, there’s… um, Jack Riewoldt.

But anyway, by this point, given the Tigers have now won three of the last four flags, wishing failure upon them is largely a redundant exercise.

So I’m not here to complain about yesterday’s loss.

Because at this point, we actually need Richmond to succeed.

For they may be the only thing standing in the way of a flag for Port or Geelong.

Yes, it’s clear (as it always was) that we won’t be in finals contention, and it’s time to ponder the least bad scenario for the 2021 premiership.

And it’s an intriguing prospect. Melbourne’s easy win over the Bulldogs on Friday night was a powerful statement: if I’m reading it correctly, it essentially means that Adelaide is the best side in the league?

But personally, I’m leaning towards a Brisbane or Bulldogs flag. If nothing else, of all the ex-Crows playing for premiership contenders, those two have the least objectionable ones.

As for us, we should count yesterday’s loss as the best of all possible worlds in a season that’s shaping up as the very model of a perfect rebuild.

We’ve showed some fight, had some great wins along the way – and we’re still on track for a top-five draft pick.