I mean, there was a period there, in the mid-to-late noughties, when it seemed we just couldn’t beat them, even when all commonsense suggested we should.

That was pretty annoying.

And that was preceded by the defining two years of our post-’98 malaise, when our (almost) all-conquering side under Neil Craig twice fell short against the Eagles in a pair of preliminary finals, the second of which remains one of the most traumatic experiences in my history of football fandom.

But, even then, I didn’t really blame West Coast.

In 2005, it was our own stupid fault for losing to St Kilda in the first week of the finals, which meant we drew the Eagles in the prelim instead of Sydney, who we’d beaten at home earlier in the year.

And in 2006, it was our own stupid fault for not losing to Freo in the first week of the finals, which meant we drew the Eagles in the prelim instead of Sydney, who we’d beaten at home earlier in the year.

And while we suffered some dastardly thrashings over the years at the Eagles’ hands (or talons, I suppose) – to this day, the mere mention of the name Scott Cummings sends a cold shiver down my spine – we also managed to dispatch them en route to not one but two flags in the late ‘90s.

Which, to be frank, remain the only two flags we’ve won. 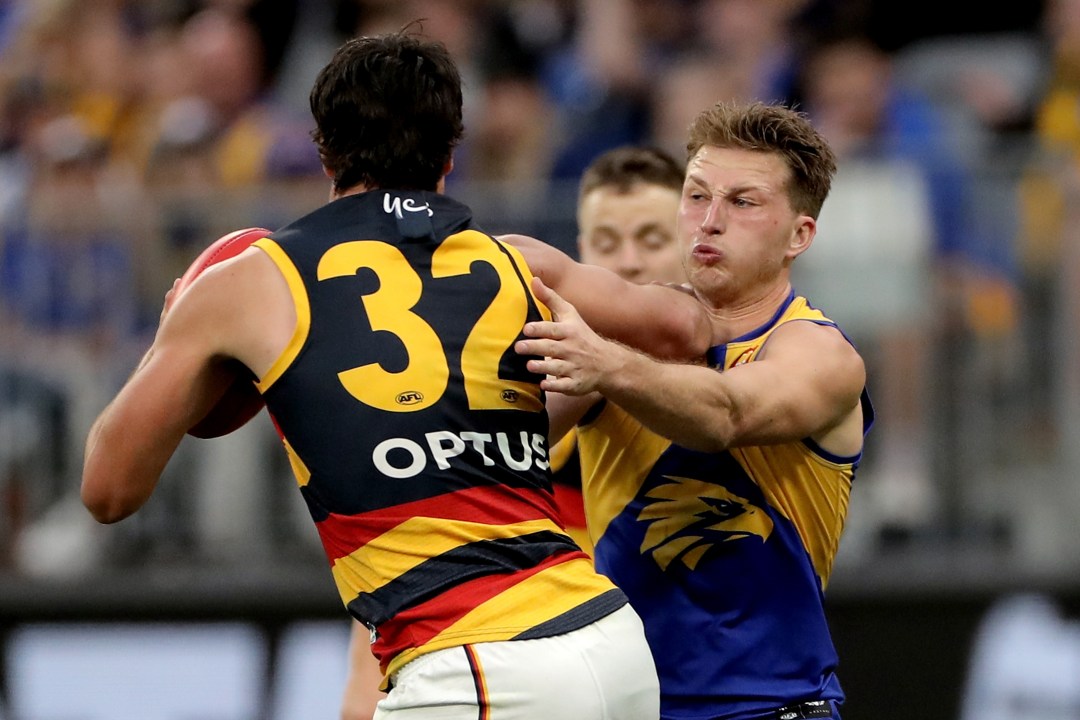 The last time our number 32 crashed into this many West Coast players in Perth, we won the minor premiership. And then lost the prelim to them a few weeks later. Photo: Richard Wainwright / AAP

Not to mention the fact that we produced perhaps the finest quarter of football Adelaide has ever played against them one fine Perth afternoon in 2002.

Trailing by 40 points at three-quarter-time, the Crows kicked an astounding nine goals in the final term in one of the most scintillating bursts I’ve ever seen them conjure.

Unfortunately, they also let the Weagles kick five of their own, so they comfortably lost the game regardless, but still – pretty good, nonetheless.

Anyway, the point is that I bear West Coast no particular ongoing grudge, and moreover that sometimes losing to them can still be a strangely positive experience.

As was the case yesterday. 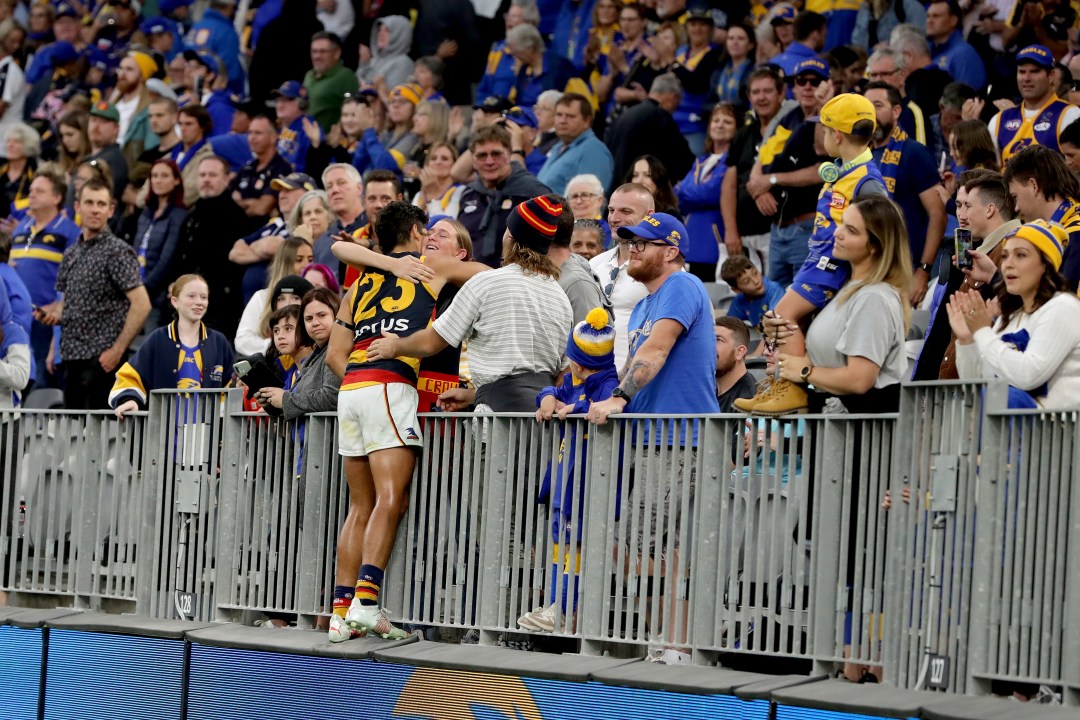 Indeed, I can’t recall feeling so upbeat about a fairly routine loss since… well, since the last time we played the Eagles.

Which, in hindsight, may have been the game in which we turned the corner in the midst of our interminable 2020 losing extravanganza.

Not to mention that Reilly O’Brien snared himself a snazzy new mobile phone in the process. 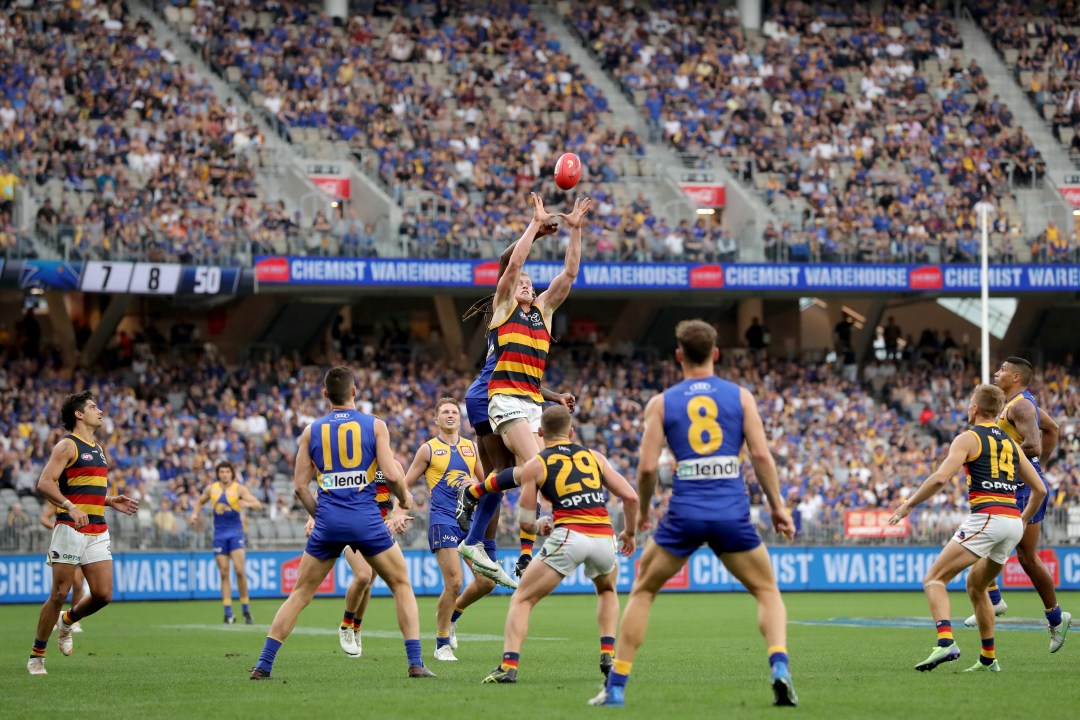 Reilly O’Brien kept his match day notes to himself this year, thanks to a brand new iPhone. Photo: Richard Wainwright / AAP

But it was the match in which we glimpsed signs that would hold us in fine stead for our eventual drought-breaking victory against the Hawks – for, as North proved again this week, the trick to ending losing streaks is to play Hawthorn (Round 20, Adelaide Oval – lock it in).

And again yesterday, this was a loss that held far more positive signs than negative.

A loss that reaffirmed, yet again, our Season 2021 mantra:

The intent was there, typified by the effort of debutant Ronin O’Connor with his eight tackles.

In fact, McAdam could have considered himself lucky to be selected, given he was dumped for doing not much and continued to do not much in his sole SANFL outing.

But, with two small forwards out injured, the stocks were bare.

The Crows posted footage during the week of O’Connor being told he was playing a senior game, which was all very nice.

They didn’t post anything about McAdam being told he was getting a recall, but I think this was about the gist of it:

Of course, McAdam’s inclusion would have been hotly debated by the selection committee, given he was dropped after a few quiet games and hadn’t exactly responded with a gauntlet-throwing statement in the reserves.

But in the end, the case for playing him was overwhelming:

Still, it proved to be a selection masterstroke, because Shane was back to near his best, taking screamers, harassing defenders and kicking goals. Having gone back to the reserves to find his form and failing, it turned out he found it in the seniors instead.

The margin never blew out beyond 35 and, in the end, the Crows lost to West Coast in Perth by a modestly-respectable five goals – the exact amount kicked by Eagles forward Jack Darling in a bizarre second-term burst, in which he briefly threatened to unleash a Crows savaging of Scott-Cummings-circa-2000 proportions.

Those sadistic bastards The Footy Gods were clearly on his side, too, because he still managed to find the big sticks even when he spilled marks or idiotically attempted to dribble the ball straight into a Crows defender after taking a comfortable grab a mere few metres out from goal.

Anyway, the fact remains, there was a lot to like on the weekend.

And none more so than:

Yes, Port’s mid-season transition from premiership-contending colossus to minor irritant continued with a loss at home to the Bulldogs, who surged in the first and third quarters, and again late in the fourth to claim a solid win. 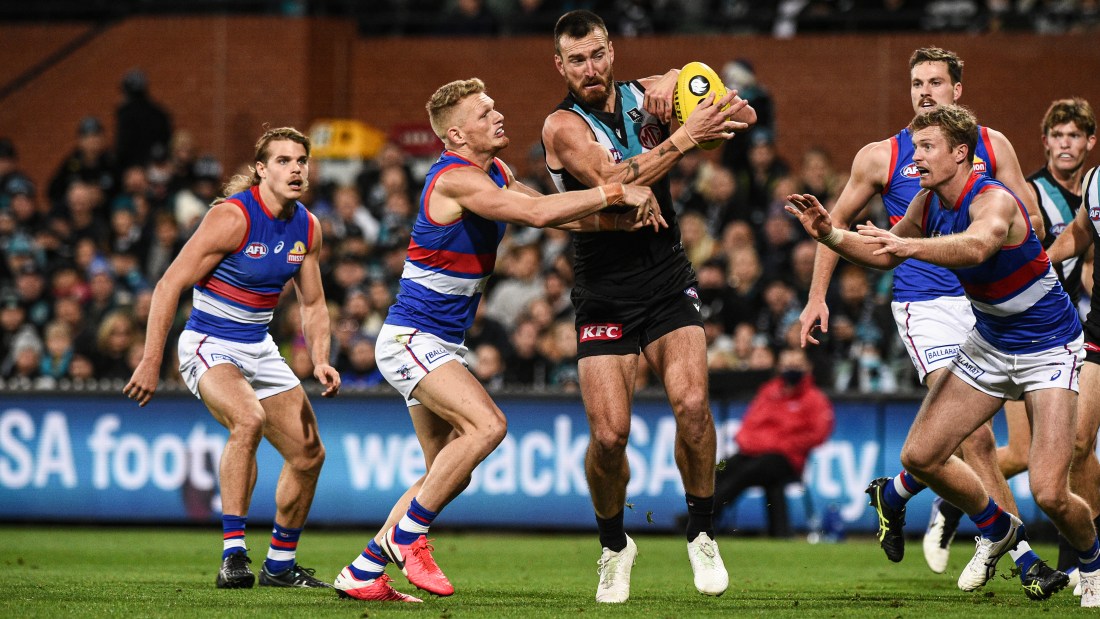 It was not so very long ago I was thinking of calling this year’s premiership race in the Power’s favour (a worst-case scenario that we probably have to concede could well occur at some point in our lifetimes), but nine rounds in and they’ve only managed to beat one side currently ensconced in the top eight – and even that was a contentious two-point win at home against the notoriously-flaky-except-when-it-counts Richmond. 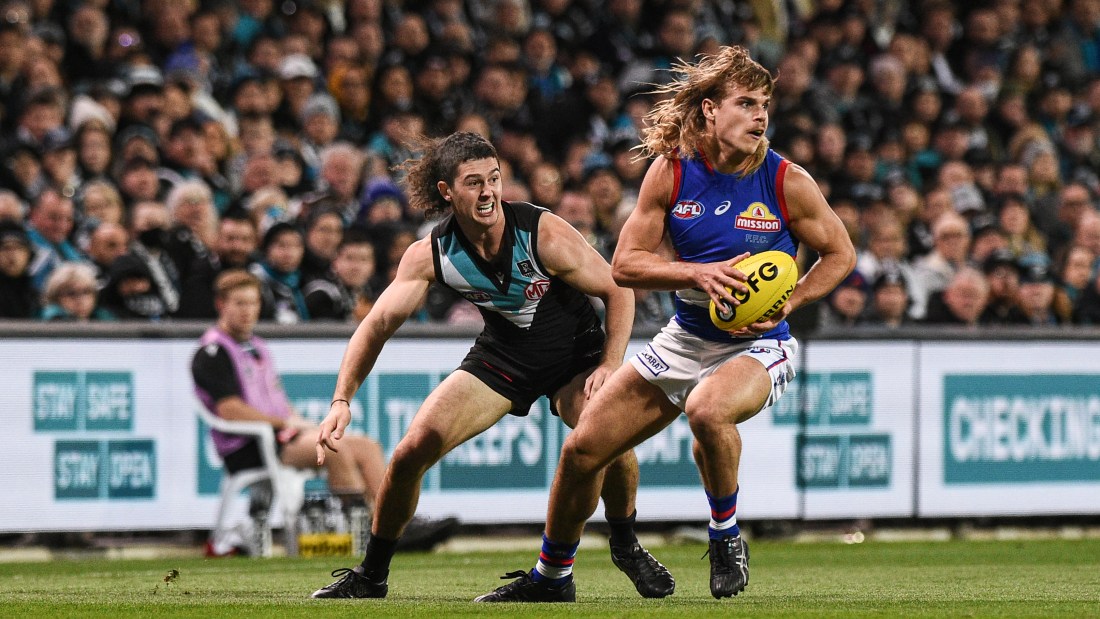 The Bulldogs won both the game and the ‘who’s got the better mullet’ competition. Photo: Michael Errey / InDaily

I must admit, I was a tad annoyed about Geelong yet again pulling off a scrappy win against the haphazard Saints on Friday night, but as the weekend drew to a close I could suddenly see the upside of it: 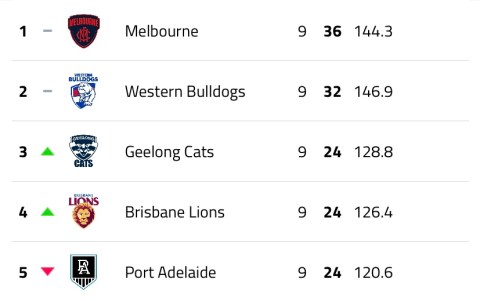 Everything happens for a reason, after all.

Even our recent annoying narrow losses against Freo and the Hawks, which kickstarted what is now becoming a full-blown losing streak. 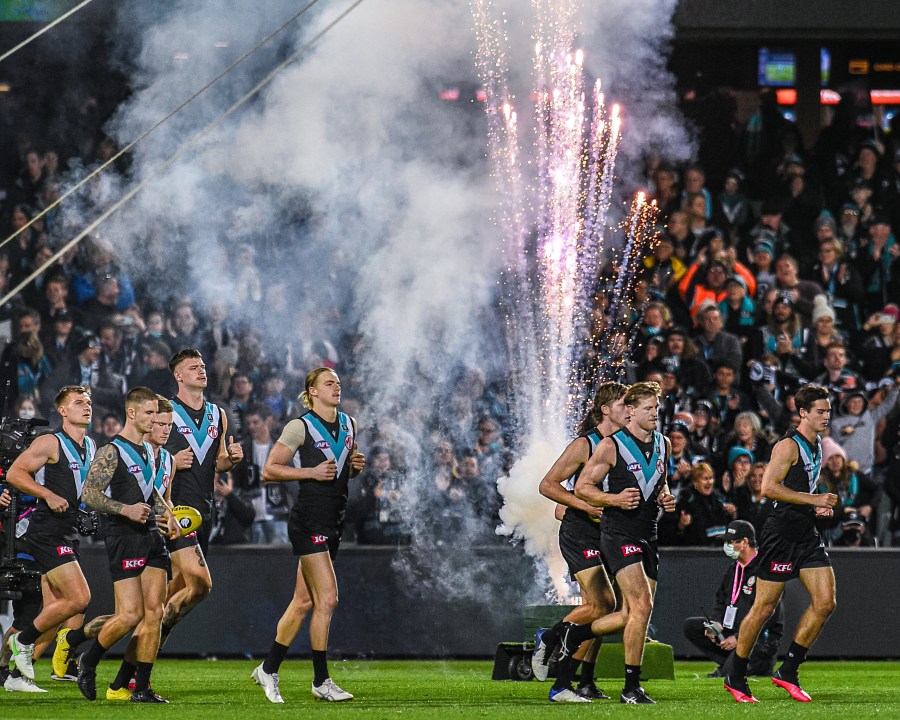 Port showed some spark, but unfortunately it was before the game had actually started. Photo: Michael Errey / InDaily

For, much as we were briefly entranced by our 3-1 start to the season, the fact remains that the Crows are a work in progress, and we should temper expectations accordingly.

But at least, for now, our mission to once again become a half decent team appears akin to Rachel Hunter’s age-old quest for hair so healthy it shines:

Which just leaves one small, but rather fundamental question unanswered.