Or at least, all of them who weren’t nastily concussed, wrenched their ankle, twisted their knee or fell 49 points short against their hated local rivals.

In fact, on reflection, the best part of the Showdown was all the bits that didn’t involve the match actually being played.

After all, you always know when it’s Showdown week.

There are the telltale signs.

The biannual Ramsgate retrospective, for instance – an SA media tradition wherein, like an old campfire tale, the story of the state’s most revered act of spontaneous mass violence is lovingly retold.

There is a law somewhere on the statute books that decrees this regular reflection must always include one of the protagonists (or someone who once worked with one of them, at least), pointing out that if the infamous 2002 punch-up had happened in the smartphone era, it would have gained far more publicity than it did but that instead it all died down and was forgotten within a day or so.

As they’ve been pointing out every year now for almost 20 years. 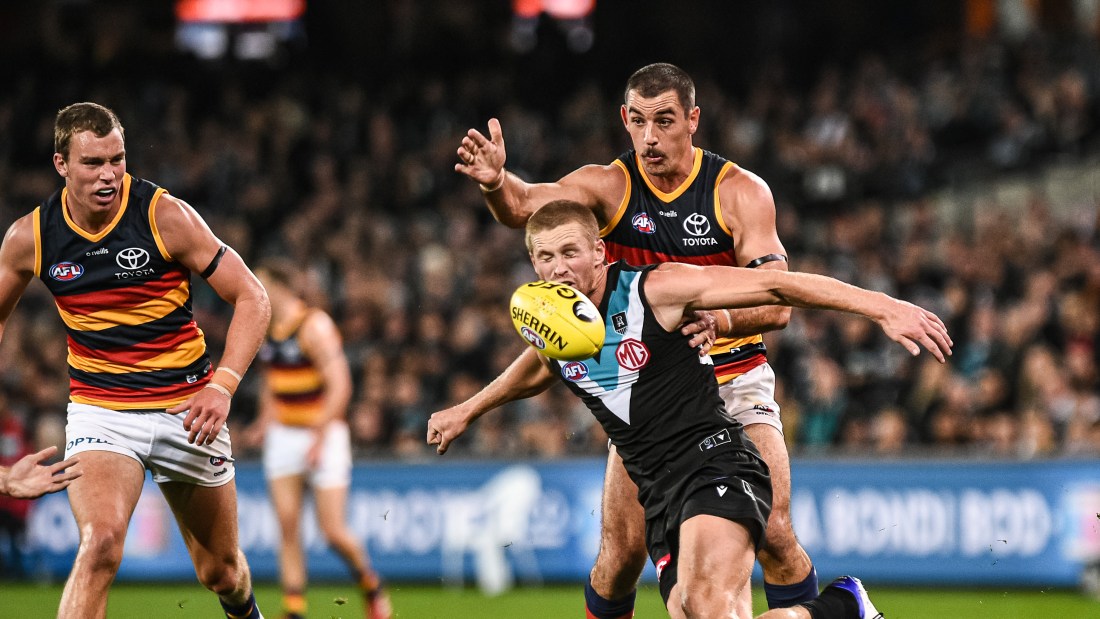 Tex not quite getting his hands on the ball. Photo: Michael Errey / InDaily

Anyway, the Ramsgate retrospective is a pretty good indicator that we’re set to be trounced by our annoyingly-competent crosstown rivals, but it seemed to me that the buildup was more frenetically exuberant this time round than it’s been for some years.

Even Queensland quisling Charlie Cameron got in on the act, taking to Twitter to declare the fixture “the best rivarly [sic] game in the AFL”.

The palpable excitement was, however, somewhat inconsistent with the fact the two sides have rarely been further apart in terms of skill or expectation.

Look, don’t get me wrong. I dislike Port as much as any right-minded individual, but it would be churlish not to concede that they’re playing pretty good football these days.

And moreover, that we, on the other hand, aren’t. 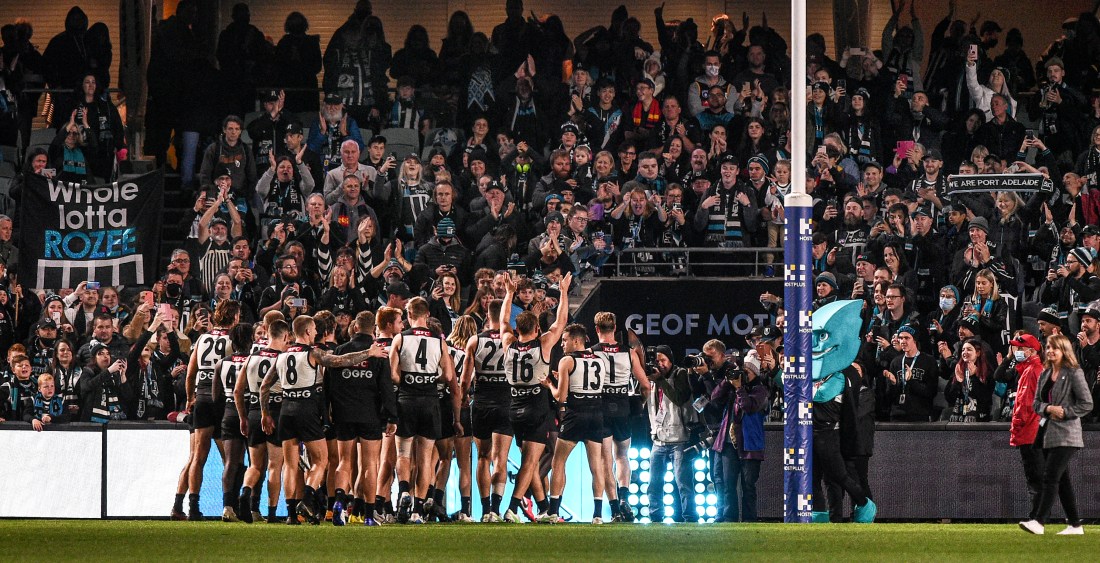 The Port players rush from the field to take off their hated club guernseys and replace them with those of their reserves side. Photo: Michael Errey / InDaily

So, in case there’s some misunderstanding: if you’re a Port supporter, and I tell you that I hate your club, there’s really no need to reel off your list of accomplishments, or remind me of your recent record against my own team.

For that would be to merely state the bleeding obvious – that Port is currently (and historically, depending on when you argue their history starts) Pretty Good At Football.

But this does not make them intrinsically Good.

It’s like saying that Darth Vader is handy with a lightsabre, or a dab-hand at the ‘finger-pinching-strangulation’ trick.

I mean, he’s obviously a very talented Sith Lord – but a Sith Lord nonetheless, and thus also the very embodiment of evil.

Indeed, there’s some uncanny parallels between Port’s AFL side and the Artist Formerly Known As Anakin Skywalker.

For starters, they’ve always been part of the narrative, even when they didn’t exist yet – and the storyline worked far better once they turned up (every decent narrative needs a proper villain, after all).

They also played an important role in the creation of the hero of the piece.

Moreover, they’re both quite intent on wearing a particular black-themed outfit for reasons that are never really explained.

As for Adelaide – well, we’ll defer to our new unofficial club motto: it could’ve been worse.

In fact, it has been worse – just last year, in fact.

And probably will be again.

Legend has it that Malcolm Blight responded to that first Showdown defeat by writing the number ‘18’ on the whiteboard during the team debrief, telling the players that represented the number of rounds still to play, and that the match just gone was but one game.

(NB: I have now hereby fulfilled my legal obligation under state law to mention Blighty writing ‘18’ on the whiteboard in any given article referencing the first Showdown.)

Similarly, then, one would hope Matty Nicks put Saturday’s loss in context by penning the number ‘5’ on the team board.

Why 5? Because that’s the first-round draft pick we’d be getting if the season ended right now. 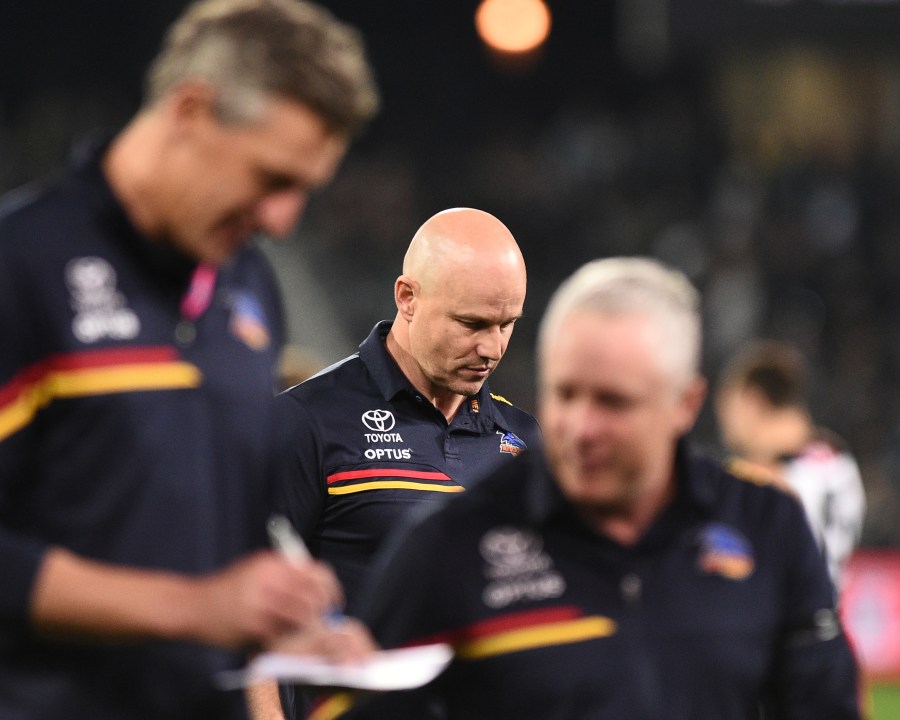 Nestled neatly between Thrillthorpe and the Big Fisch.

So in the spirit of looking on the bright side, I’ve made a few notes.

In the lead-up to this season, I’d surmised that our best outcome would be a year akin to the Brisbane Lions in 2018 – obvious signs of improvement but without blowing it by accidentally winning too many games.

Sure, when we kicked things off with three wins from our first four, I was briefly captured by the fleeting prospect of our rapid improvement but the reality is, we’re doing exactly what one might have expected we’d do when we embarked on a thorough list overhaul.

And those early wins, before the toll of the season started to weigh on our young squad, were more a sign of what we might, hopefully, be capable of in years to come than what we should expect for the rest of 2021. 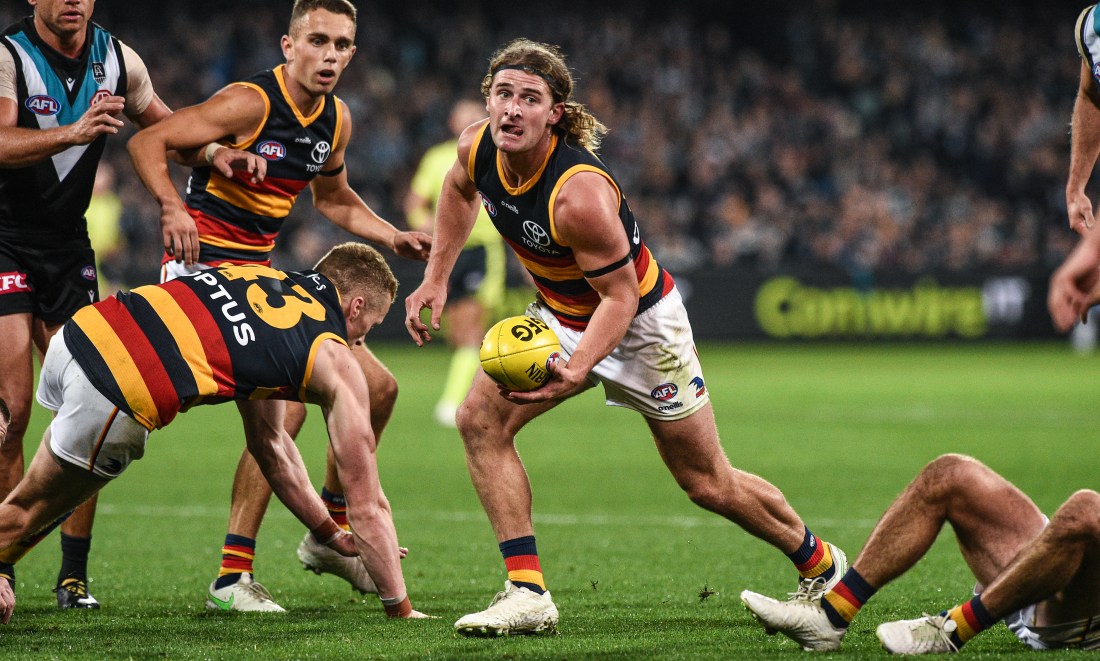 Sam looks like he will be ‘Berry good’ in a few years. Photo: Michael Errey / InDaily

And in any case, even among the rubble of Saturday’s loss, there were signs of improvement.

In a scrappy game, there was hardness at the contest; the intent, so clearly lacking against GWS the previous week, was there.

The spirit was willing, then, but the flesh couldn’t kick a goal to save its life.

I’d been hoping for a breakout game from Jimmy Rowe, and he duly delivered by kicking an impressive 100 per cent of our first-half goals.

Sure, some might argue that a team only kicking one goal in a half of football is somehow underperforming, but that’s by the by.

And Thrillthorpe reminded us he still exists by kicking a brace of third-quarter goals, which was not as Thrilling as his five in Tasmania the other week, but still marginally Thrill-inducing.

Then, of course, there was the SANFL curtain-raiser.

I’m all about our SANFL team these days, since I can never really tell whether the mainstays of our future best-22 are running around in the seniors or the reserves, and it was good to see Jones garner a few touches off half-back, Frampton kick a bag of four, Hately fire up from a slow start and Borlase kick a couple of iconic goals against his old man’s side.

They still lost, of course, but you can’t have everything.

And a famous win it must have been too, since Port’s AFL team went out of their way to honour the efforts of their reserves side later that night, by donning their guernseys for a rousing rendition of that famous club anthem that’s rung through changerooms across the SANFL for generations: “We’ve got the power to win…”

Port Magpies supporters reluctantly stuck around after the curtain-raiser to watch the AFL side play too. Photo: Michael Errey / InDaily

Or maybe they were simply paying homage to Collingwood’s first win in six weeks earlier in the afternoon?

Anyway, the point appears to be that Port don’t much like their actual guersneys, which is a bit sad for them since they have to wear them most of the time.

But credit where it’s due: I can’t think of a stronger statement of resolve and defiance than… um… changing into a different guernsey for a few minutes after a game of football.

It is, in fact, very edgy and absolutely not lame in any way at all.

Look, they seem quite riled up about all this, so I’ll concede it’s not the biggest deal and if I were a Port supporter I’d probably have thought it was brilliant.

On the other hand, if I were a Port supporter it would likely mean I’ve undergone some kind of failed neurosurgical procedure, and might be easily impressed.

Mind you, as one of their supporters pointed out to me, it’s arguably kinda lame to lose the local grudge match by 49 points too.

But Port’s post-game theatrics should be welcomed, because they help explain why the Showdown – despite this particular one being a scrappy, low-skill and actually fairly boring game of football – remains the quintessential grudge match in Australian sport.

Because no matter how good or bad either team is, where they are on the ladder, or even the final margin – we still just hate each other.

And that’s the magic on which the Showdown is built.

Long may it continue. Apart from the biannual Ramsgate recap perhaps.