Remember back in 2007 when Melbourne lost their first nine games straight?

That was the year that ended with the glorious introduction of ‘119’ to our footballing lexicon, and marked the start of the Dees’ descent into the longest rebuild since Richmond lost the 1982 Grand Final (it should be noted that the same year the Tigers also won zero of their first nine games, back in the days when they were a lighthearted amusement that we didn’t have to take too seriously, like Adam Sandler before he made Punch Drunk Love).

Of course, the losing streak had to end somewhere, and – given the Crows entered Round 10 of 2007 in third place on the ladder with six wins and three losses – it was inevitable that that somewhere would be when we played the Demons.

Because, as all Adelaide supporters know, there’s something in our team’s collective DNA that ensures they’re never more likely to spectacularly fail than when we’re unfathomably confident that they won’t.

After all, that loss to the winless Melbourne wasn’t an isolated incident.

The finals-bound Crows had lost to Freo in 2001, when the Dockers had won just one of their previous 21 games, to the lowly St Kilda in 2003 and, perhaps most annoyingly of all, to the Tigers in ’06, when we were on top of the ladder and they were coming off a 118-point thrashing (though it would be another year and a half before we would realise why that margin was almost particularly enjoyable). 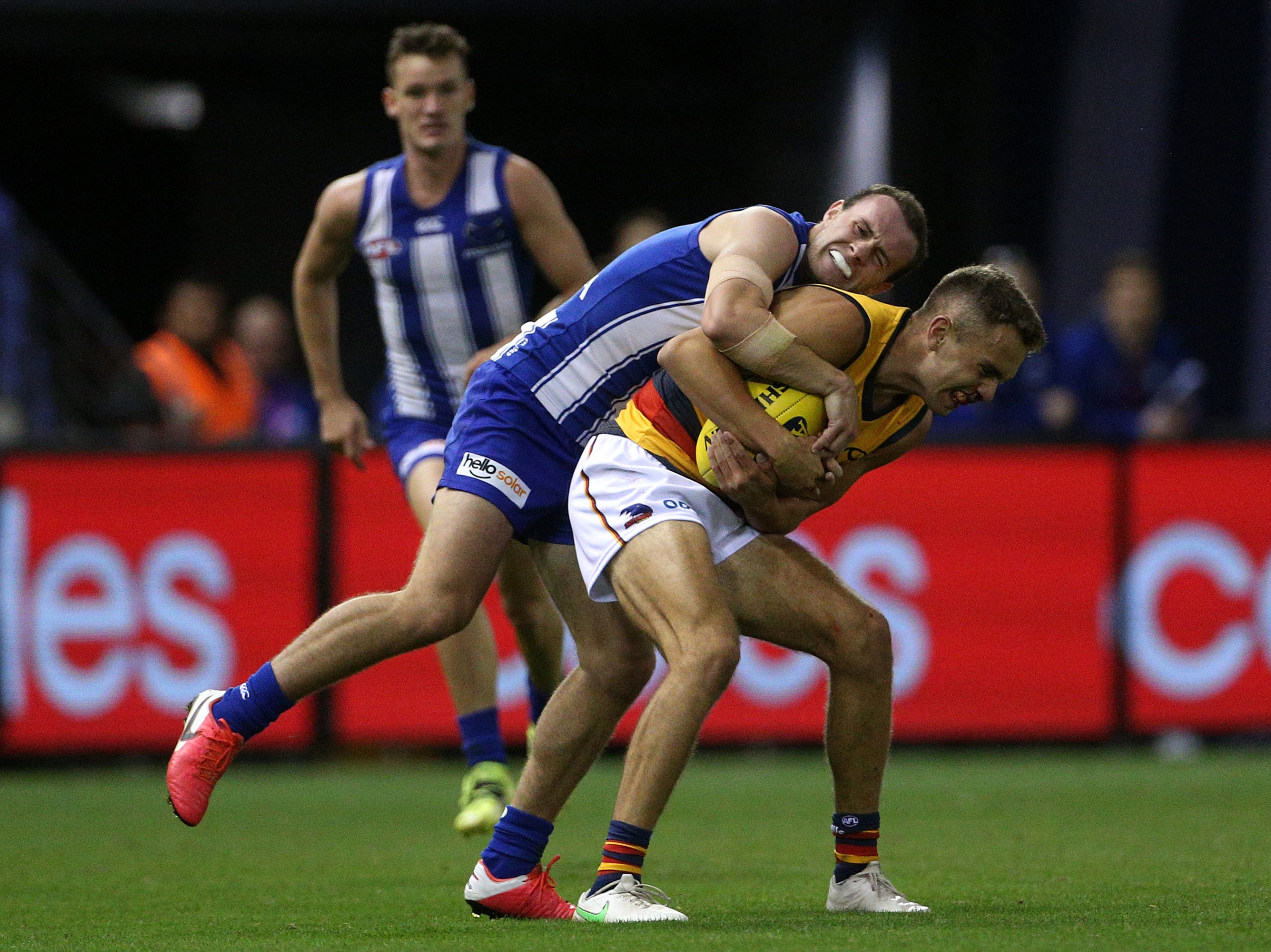 Our #38 is fast turning into the Heart and Sholl of the team. Photo: Hamish Blair / AAP

Funny to think though (in an Actually Not Very Funny At All kind of way), that had we not dropped our bundle against Melbourne in Round 10, 2007, we probably would have finished the year in 6th spot and avoided that Elimination Final loss to Hawthorn in which Buddy broke our hearts with the last kick of the game – certainly in the top five of our impressive collection of heartbreaking finals defeats.

Still, as I like to muse in that way we Adelaide supporters have of rationalising our team’s multitudinous failures so that we can get on with life, that Hawthorn loss potentially spared us an even worse fate: a preliminary final defeat to the hated Port Adelaide; or perhaps even a 119-point Grand Final loss to Geelong.

Both of which, I should add, would be predicated on the fairly pompous assumption that had we not fallen to Hawthorn, we would have beaten North Melbourne the following week.

The Kangaroos, you see, were coming off a 106-point qualifying final loss to the eventual premiers, not to mention a patchy run of late-season form.

Just as they hadn’t beaten them in their equivalent semi-final seven years earlier when North were similarly coming off a three-figure defeat to the eventual premier (in that case, the near-flawless Essendon, who smashed their fellow top-four team by 125).

All of which suggests another deep-seated historical precedent: don’t play North Melbourne the week after they lose by 100+ points. 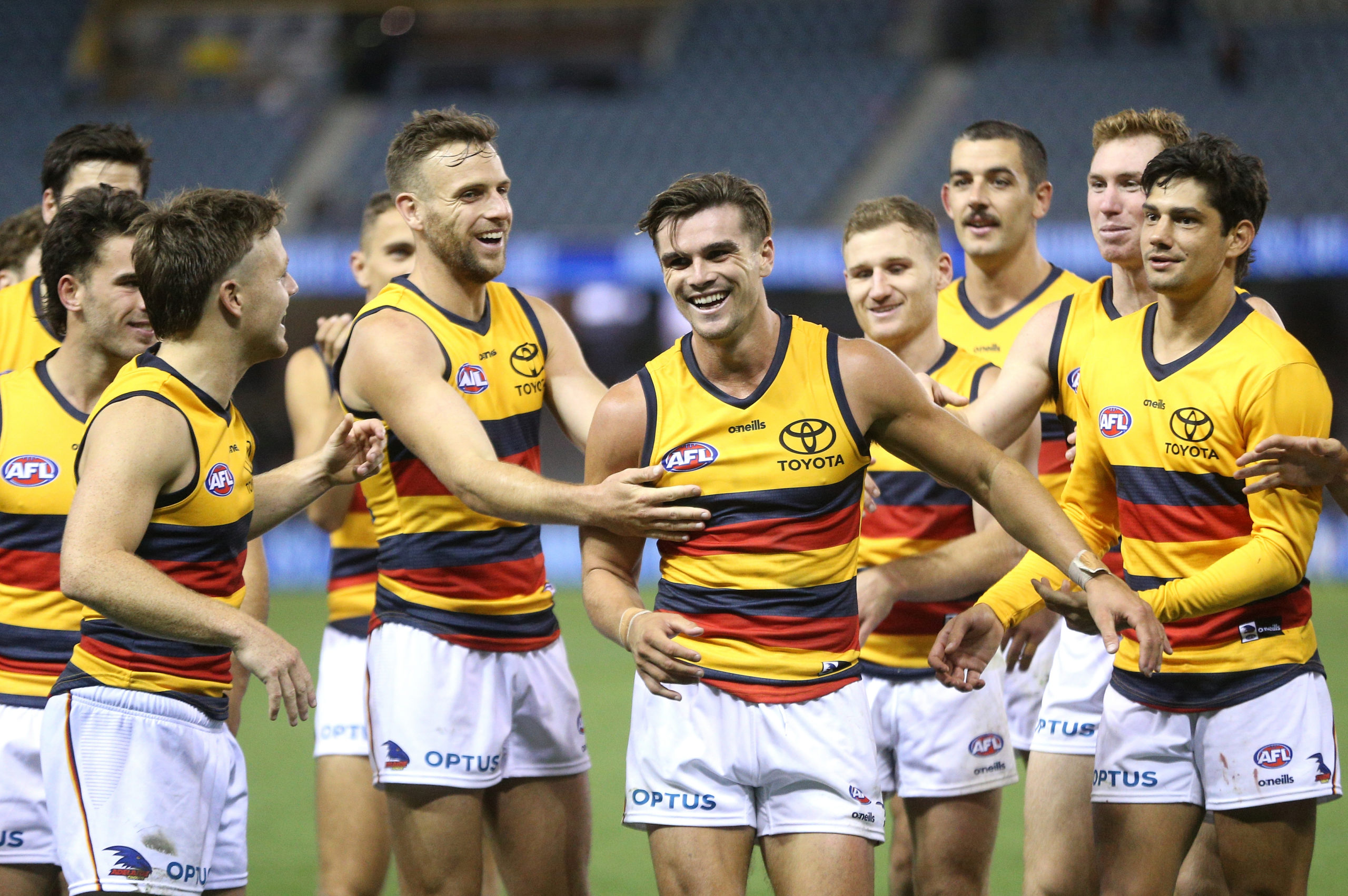 And when you look at it this way, it actually makes yesterday’s last-gasp-but-actually-quite-comfortable win over the Roos look almost quite impressive.

Sure, for three quarters we were nursing that growing sense of dread that this was turning into Round 10, 2007 against Melbourne all over again.

In the first half, Adelaide played with flair but constantly butchered their forward forays – a gamestyle best described as a mix of dash and slapdash.

The frequent turnovers kept North in the hunt before they surged in the third term, adding three majors while keeping us goalless.

And when they hit the front before the final change, it looked like all the optimism and goodwill of the preceding three weeks was about to evaporate as we regained our 2020 mantle as the laughing stock of the AFL.

Ned McHenry was racking up more frees against than kicks (literally), while McAdam was having a mare – although as it turned out, he’s actually playing the Scott Welsh role this year of being quiet for three quarters before bobbing up for three goals in the final term.

For, to our great relief, the Crows stormed home with an eight-goal final term to win by a lazy 41.

And you know what? Considering the number of times last year we were in the game at three-quarter-time only to then lose by a mile, I’m quite ok with this.

Although I probably can’t foresee a time in my life that I won’t be fuming about us ruining that free kick in front of goal in the first quarter.

As it turned out then, the game was more reminiscent of another from years gone by – when we went to the last change down by four goals against the wooden-spoon-bound Western Bulldogs in ‘03, but kicked seven goals to one in the final term.

(Scott Welsh, incidentally, didn’t bob up for three of those seven last-quarter goals, but only because he wasn’t playing that day.) 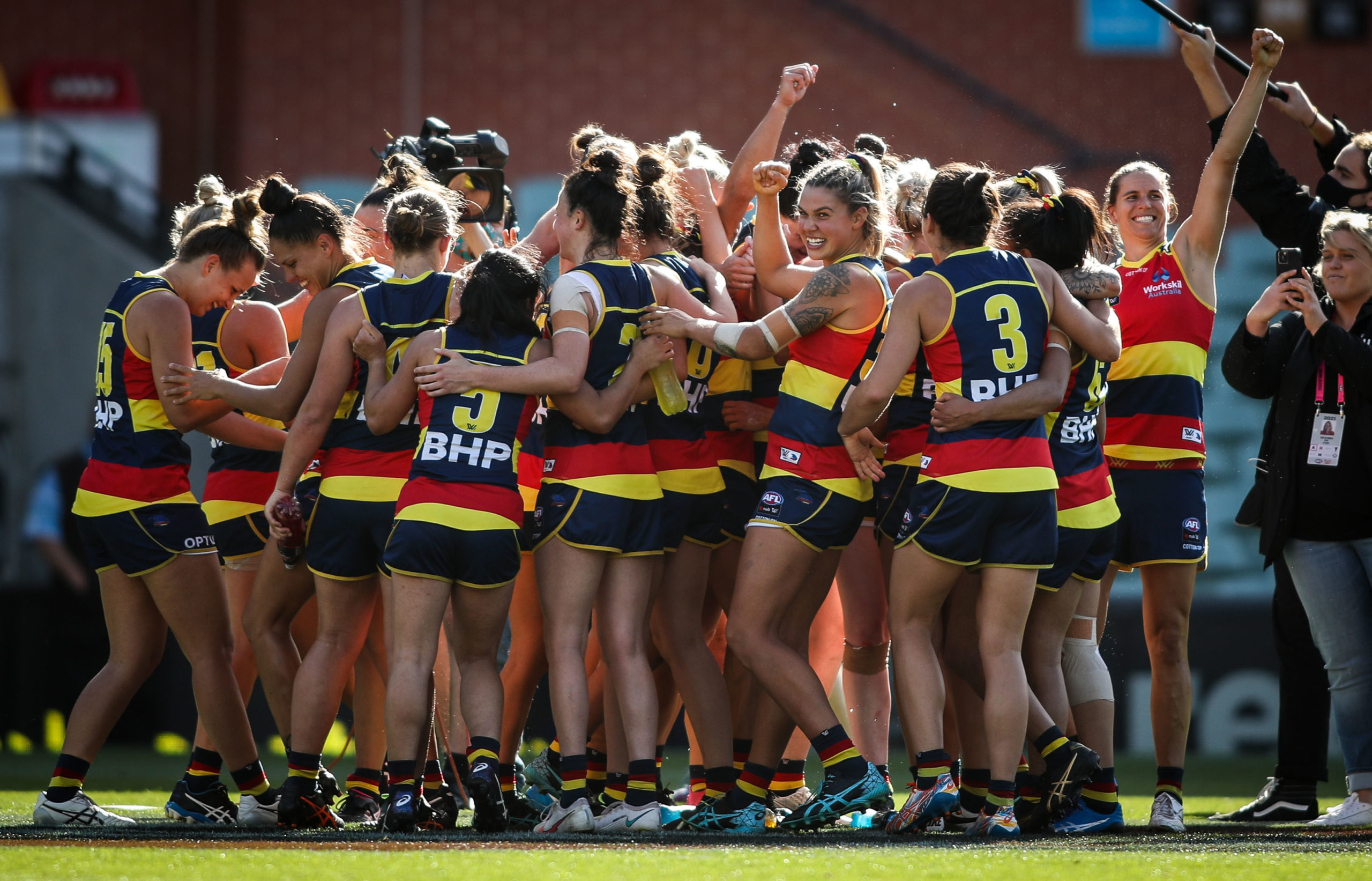 The AFLW Crows tend to do a lot of this. Photo: Matt Turner / AAP

So in the end, as they say, we managed to turn a potential Chernobyl into a mere Three Mile Island – which meant it was truly a weekend to celebrate for Adelaide supporters.

For the women’s team won their way into a third Grand Final in five years, and the men managed to avoid losing to the worst team in the league. 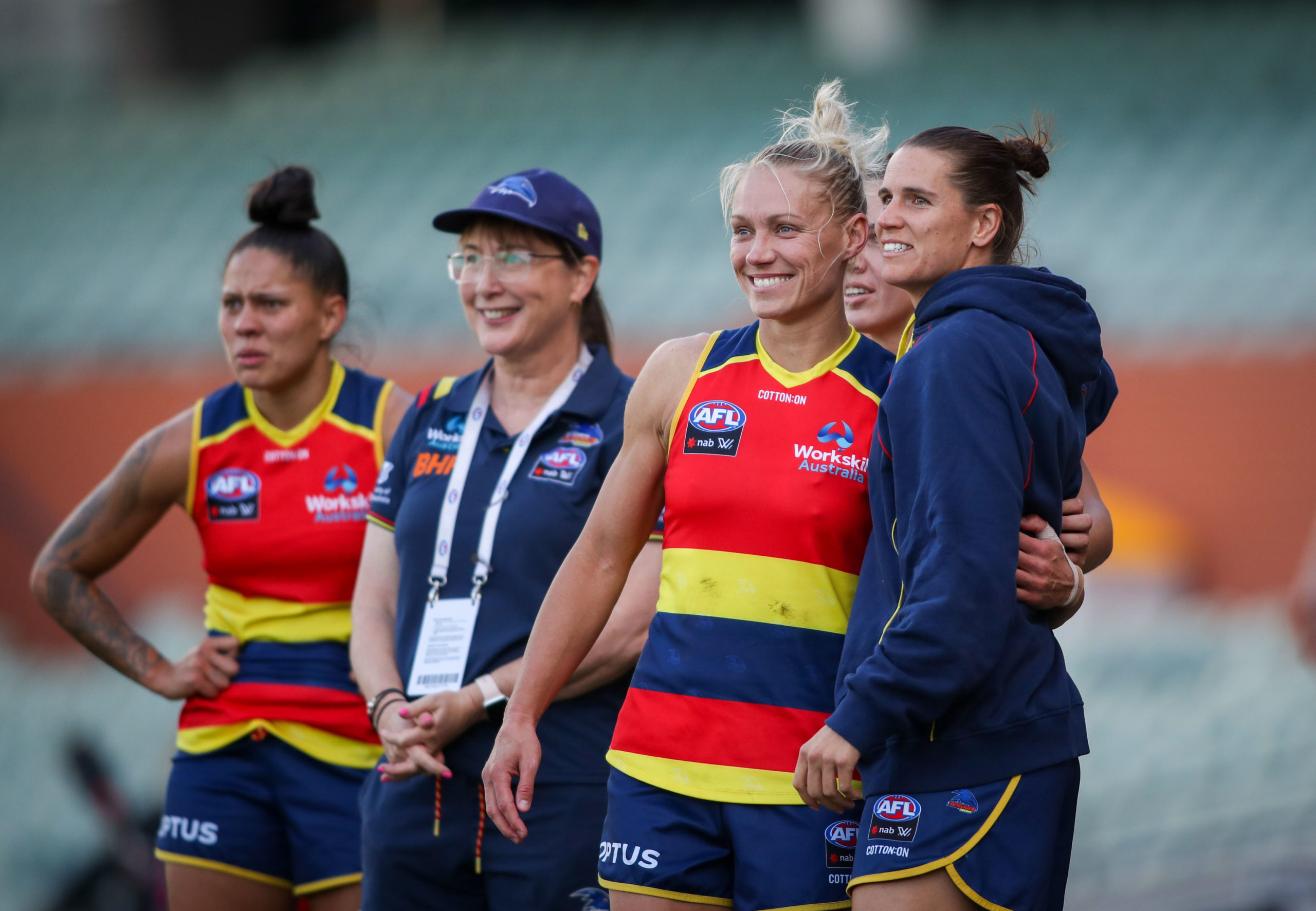 Happiness and heartbreak: Erin Phillips and injured captain Chelsea Randall, who is likely to miss the decider after a heavy knock to the head. Photo: Matt Turner / AAP

Yep, fortunately the propensity to be perpetually frustrating and stumble at key hurdles tends to be particular to the men’s side, which means our AFLW side remains an oasis of competence in our otherwise barren football fandom.

And to think, we were just three points shy of the trifecta – a Port loss at home.

That Friday night clash was a bit like watching Freddy vs Jason – it was actually pretty entertaining considering both protagonists are fundamentally evil. 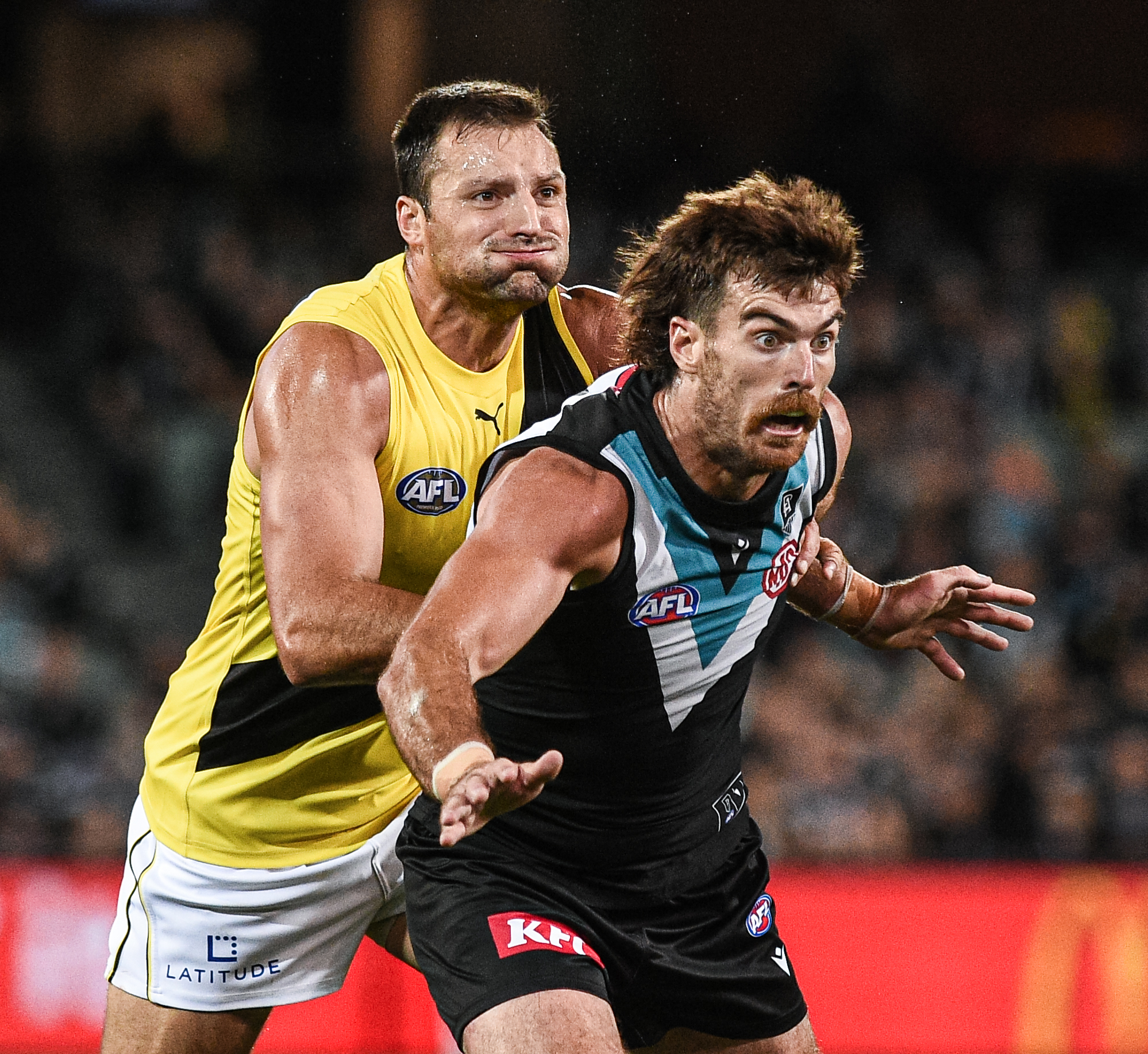 A TERRIFYING PROSPECT: One of these two teams had to win. Photo: Michael Errey / InDaily

And it at least meant that no matter what happened, there would be a consolation. 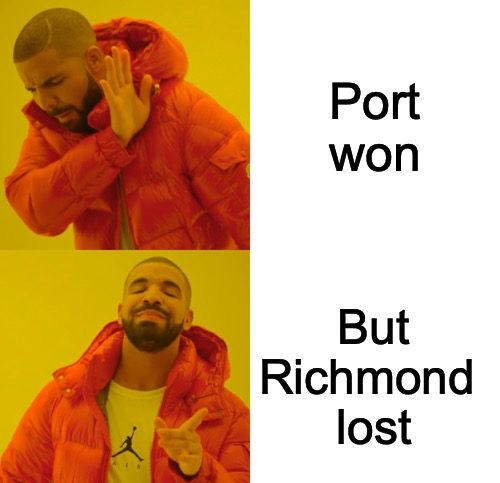 Beyond that, the only annoyance was commentator James Brayshaw’s insistence on referring to the Port home crowd as ‘the 19th man’.

Which, if nothing else, made me feel better about beating his struggling team a couple of days later.

Still, the number of times I’ve had to barrack for Richmond lately is quite confronting. I might have to go and listen to The Killers or something to remind myself how much I dislike them.

Or perhaps track down some of their games from 2007, when – like the Dees – they lost their first nine games straight.

And moreover, by some miracle, we still managed not to lose to them.