Some people complain about footy being played on sacred religious holidays.

Personally, I could get used to it.

After all, what more appropriate time than the Easter long weekend to see the Crows, wooden spooners in 2020, somehow going 2-1 and nestled in the eight to start the season?

I mean, if you can think of a better resurrection tale in human history, I’d like to hear it.

So yes, us playing (and beating) Gold Coast on Good Friday is entirely ok and certainly helps the day live up to its name.

Even though, to be clear, the ‘Good Friday’ moniker was presumably originally intended ironically, a bit like ‘Little John’ in Robin Hood.

For The Man Himself, Good Friday was far from it, unless being flogged, publicly humiliated and crucified is your Thing.

Which reminds me, Port Adelaide also travelled to Perth on the weekend.

And once again, it was a fixture in keeping with the Easter theme, in which the forces of light and righteousness triumphed over darkness and there was much rejoicing.

For, as it turned out, Port’s early form was a bit like Mal Meninga’s political career: it looked good until they actually had to do something.

Which, in turn, rather complicated my own schedule, given I wasn’t even planning to write one of these reviews this week, what with the long weekend and all.

But as things turned out, I could hardly let it all go unremarked, could I?

Although I almost had to, with a computer meltdown forcing your Fumbles correspondent to bench yesterday’s publication right on the final siren.

As it turned out, fairly aptly, the culprit turned out to be a gif so stupendously big it simply could not be contained within the confines of a mere webpage.

But better late than never, and it at least allowed us more time to reflect on a weekend in which even the neutral results were broadly entertaining.

Collingwood suffered a gloriously disappointing after-the-siren loss on the same night their SANFL reserves team got thrashed by Norwood, while my only real concern from the round was the outside possibility that Melbourne might actually be good.

But far more importantly, we haven’t had a round in which Adelaide won and Port lost on the same weekend since the ‘BC’ era.

Which, particularly given all that’s happened since, feels like a Bloody Long Time Ago. 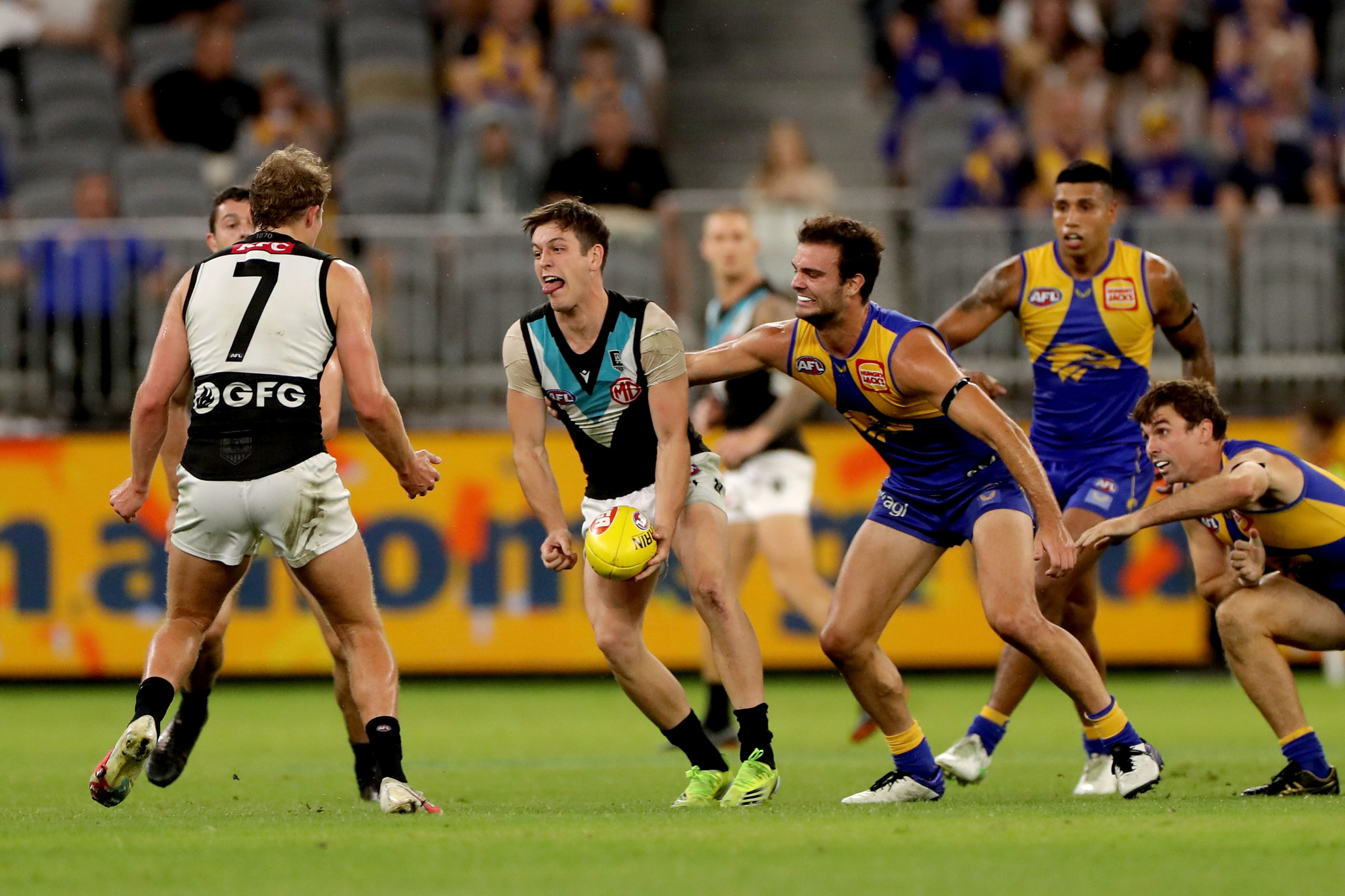 BUTTERFINGERS: Zak Butters gets a handball away under pressure but, like his team, failed to live up to the recent hype. Photo: Richard Wainwright / AAP

Throw in Brad “I want to get back to playing good finals footy and being in a successful team” Crouch’s distinctly unsuccessful club debut against Essendon, and it was truly a Blessed weekend of Biblical proportions.

For St Kilda obligingly continued a grand tradition, begun by Jesus’s disciple Peter, of the Saints acquitting themselves extremely poorly over Easter. 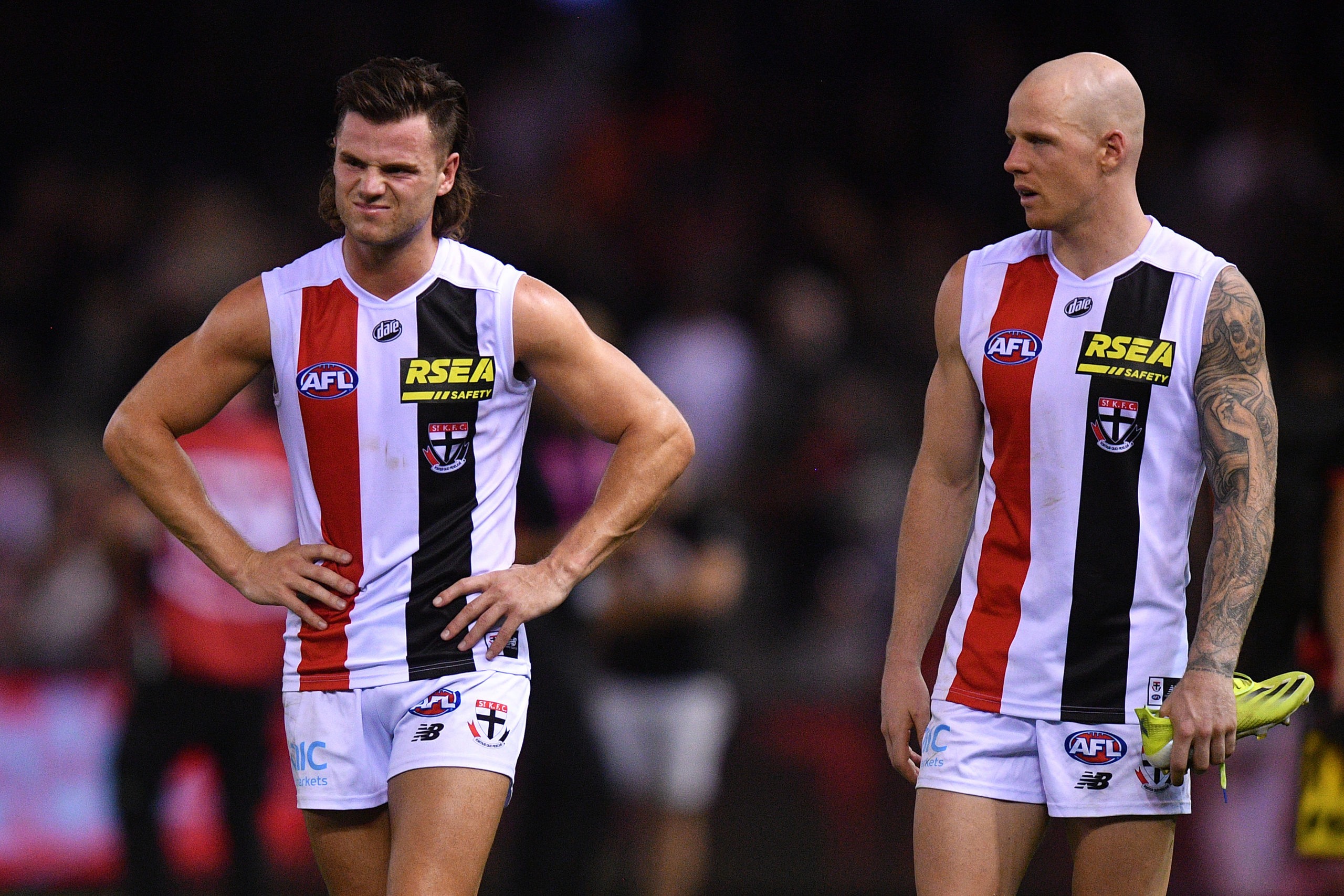 One of the many St Kilda players named Jack sums up the thoughts of anyone watching their performance against Essendon. Photo: James Ross / AAP

Unfortunately though, I was so consumed by happy thoughts of our previous night’s fighting win against the Suns that I completely missed the schadenfreude of Brad’s first game for his new club.

Which was odd, since I was actually listening to the broadcast of it.

Still, he might not have been prominent but he wasn’t the worst for his side, which was collectively as flat as a Shrove Tuesday pancake. In fact, on stats alone his game was kinda similar to that of Sam Berry, the kid we picked up with that contentious second-round draft pick we got by way of compensation for his departure.

Except that Berry actually significantly influenced the outcome of our game, while Brad was one of about 20 St Kilda passengers.

Which means that, three games into Berry’s career, we can confidently say this much about that particular transaction:

While Brad might be rethinking the wisdom of some of his recent decisions.

But just as when we came from nowhere to beat the Cats in Round One, it wasn’t merely the new faces like Berry getting it done, but some old hands playing with a newfound joie de vivre.

Just as he did the previous week – and as he did six years ago, when led his side out onto Adelaide Oval as captain for the first time – Tex Walker booted six goals. 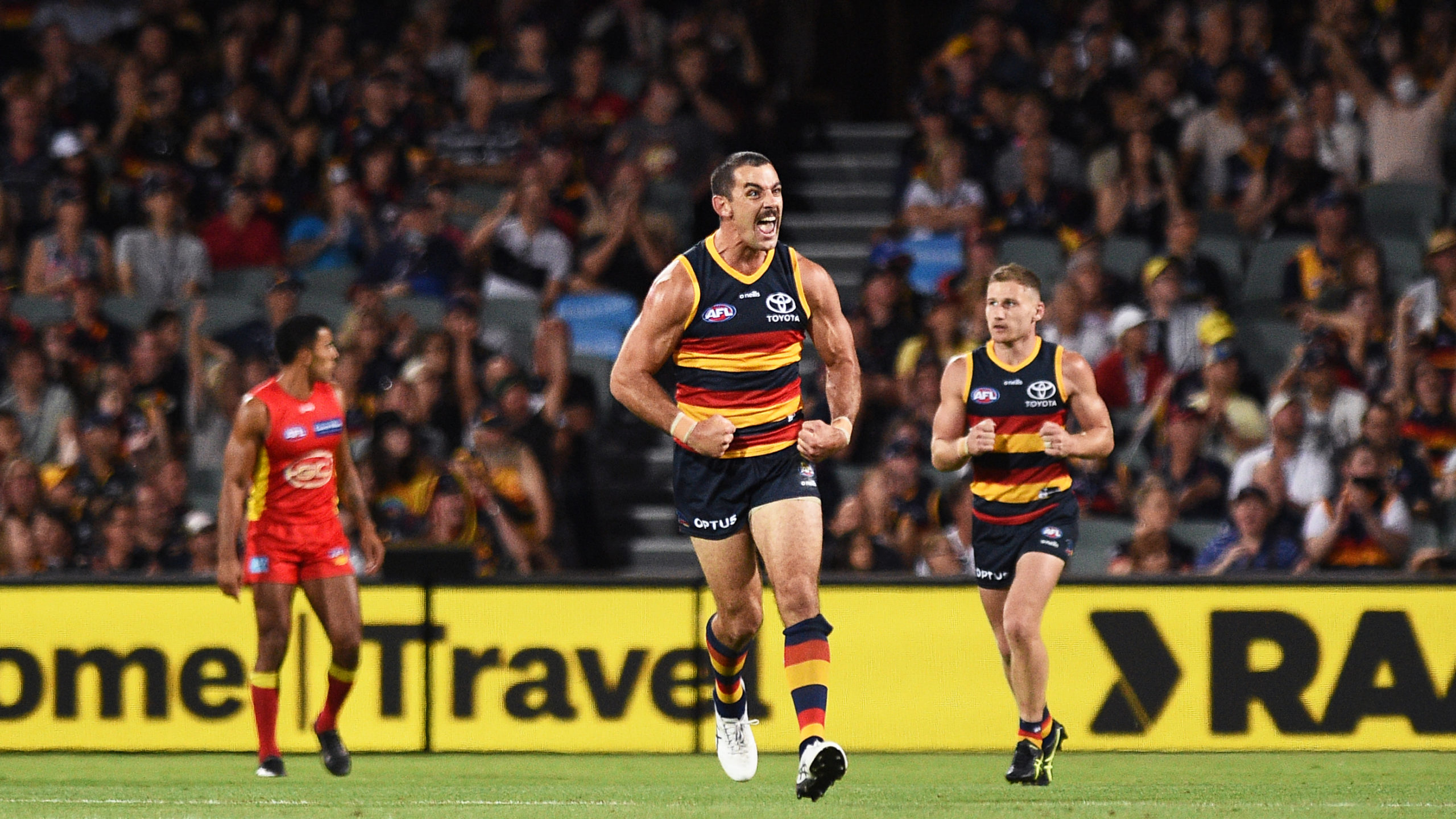 Three games in, and he’s already superseded his entire season tally from last year, when he bizarrely topped our club goalkicking with a paltry 15 majors.

That first game as captain, incidentally, was also on an Easter weekend – and it was also appropriately miraculous.

Back then, it felt like the cusp of a golden new era, as the Crows – under Phil Walsh – tore the Kangaroos apart by 77 points.

If you happen to be into historical comparisons, that same weekend Port also lost in Perth.

In the years since, Tex has rarely played with such authority and freedom of spirit as he seemed to play with that day.

It was, I think, the last breath of that spirit with which he played in the early days, when he was a mulleted layabout constantly in the coach’s bad books.

Despite much ensuing success and solid form, that spirit was rarely seen on the field again – until, bizarrely, the past three weeks.

Three weeks many didn’t even feel he should play. I must admit, I spent the off-season expecting some random announcement of his retirement from the game.

At best, I figured he’d be in and out of the team this year while his various understudies found their feet in the senior side.

Instead, he’s leading the Coleman count after three rounds – and quite possibly the Brownlow tally too. 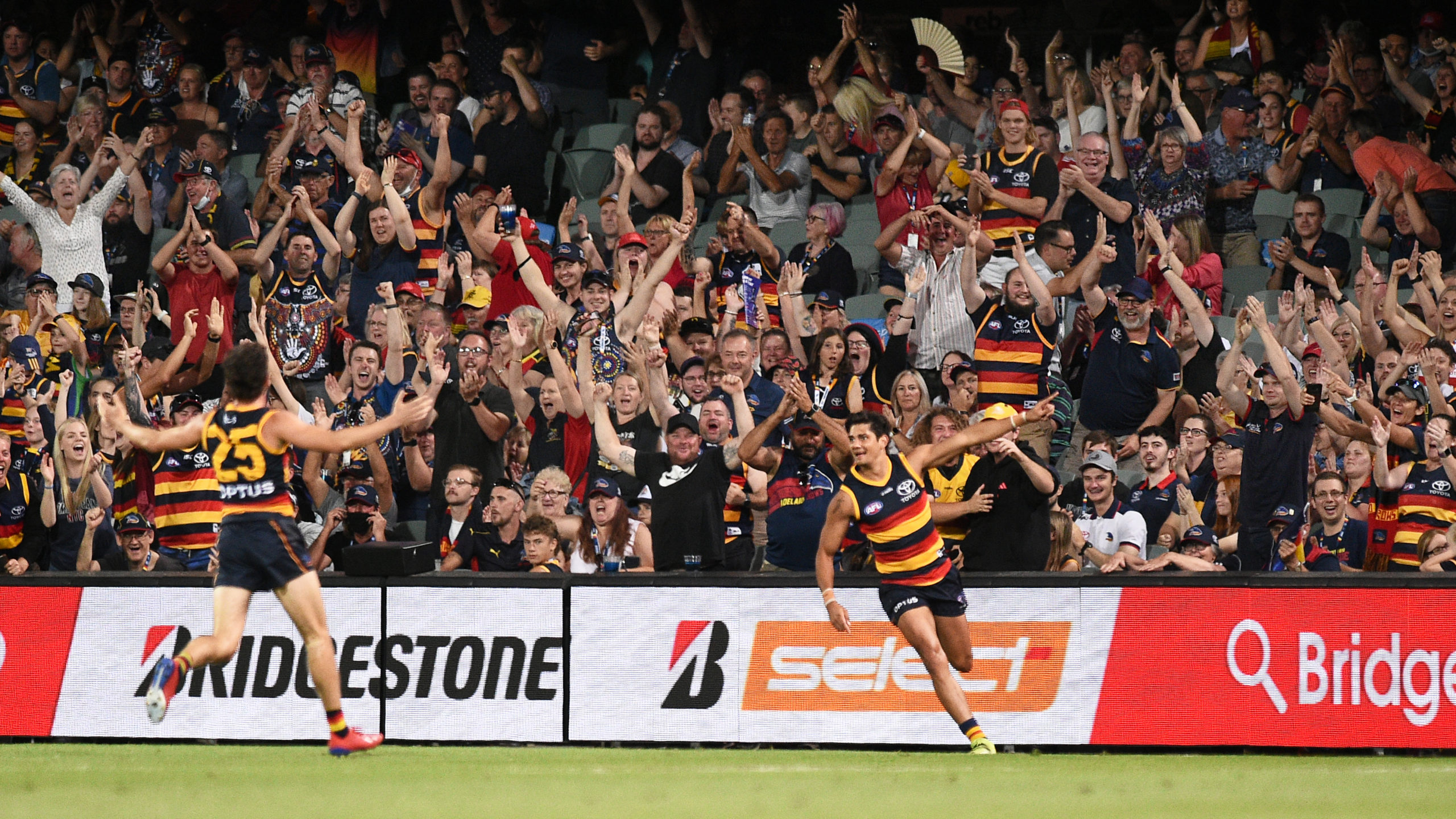 Early days, but things are looking up for Adelaide supporters in 2021. Photo: Michael Errey / InDaily

Anyway, if there’s one thing more satisfying than winning an arm wrestle of a contest after getting blown away early, it’s checking the following week’s fixture on your way home and realising you’re playing the team that went down by 128 points earlier the same day.

Still, let’s not get ahead of ourselves.

After all, North Melbourne supporters with long-ish memories should appreciate better than most the potential to come back strongly from 100-point-plus drubbings (except for Grand Final ones, which are… well, final).

In 2004, after we went down to the Lions by 141 points in what (fortunately) remains our biggest ever loss (and one of the more traumatic experiences of my adult life), we bounced back to beat the Kangaroos the very next week.

Sure, it was arguably the single worst game of football ever played – with only one goal scored between both teams to halftime, and 31 behinds registered for the match. But seven of those behinds proved the difference for Adelaide and, frankly, after the performance that preceded it, I’m still prepared to call it one of our greatest ever wins.

Similarly, given the year that preceded this one, I’m calling the opening three rounds among our better starts to a season. It’s all relative, isn’t it? 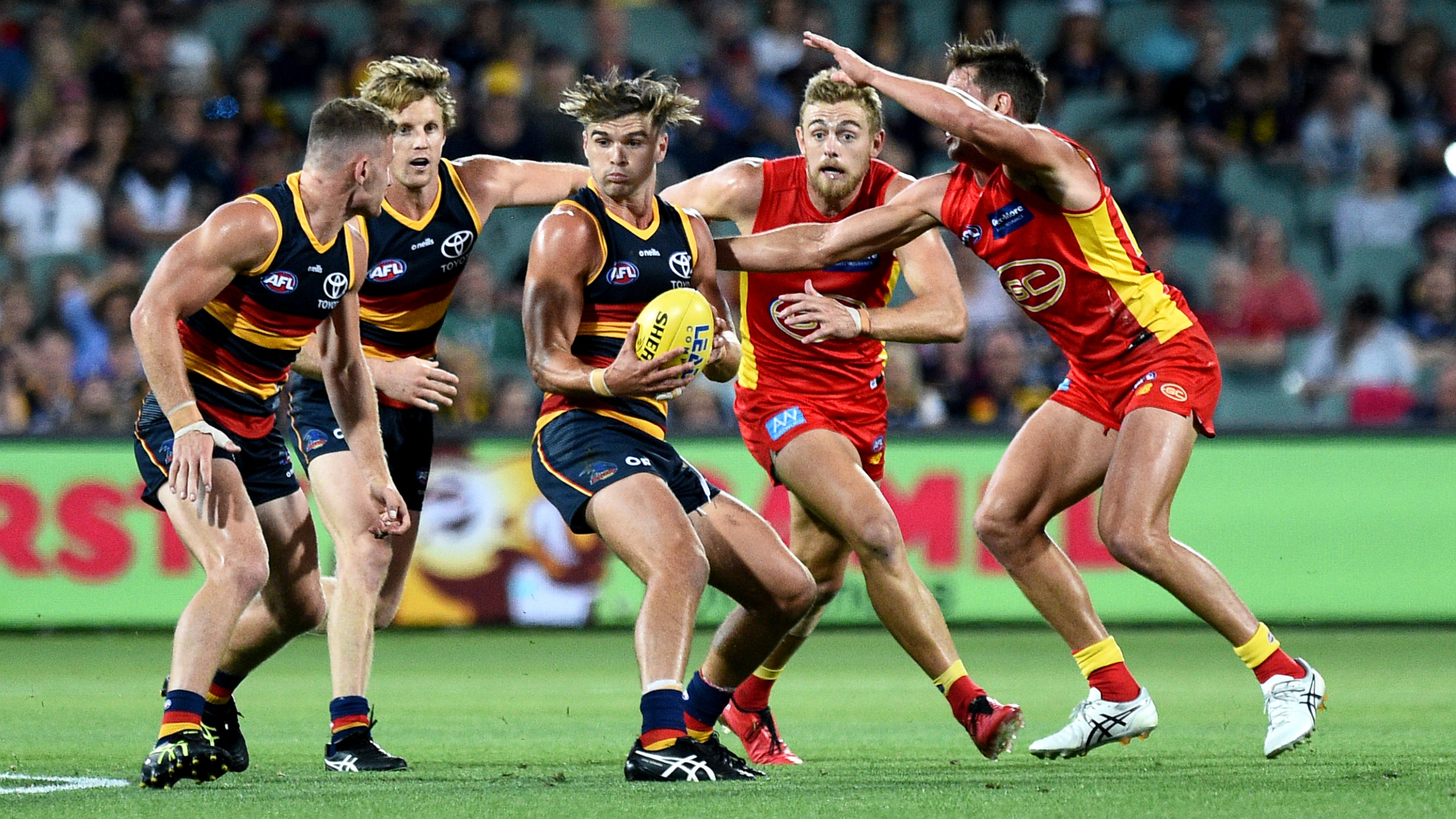 The game had almost as many highlights as Ben Keays’ hair. Photo: Michael Errey / InDaily

And for the first time, perhaps, since that Tex-led outing against North to open the 2015 season, we can now sense that we might be at the dawn of a new era again.

At least until we accidentally lose to North next weekend.

Because, of course, our expectations aren’t high in the short, or even medium term.

Among the most familiar narratives of the Crows supporter post-’98 is the knowledge that as soon as you start to believe in your team again, they’ll somehow manage to ruin it for everyone.

Moreover, Gold Coast have never played finals, and never won at Adelaide Oval – and in any other era, beating them at home would be routine, unremarkable.

But then, we’re not in any other era and, for now, this revival – this was our Easter miracle.

Our secular footballing equivalent of rolling back the stone and walking from the tomb – although, unlike the Son of God, we did actually have a Good Friday.

It may not have been much, but it’s enough – at least for this hitherto Doubting Thomas – to reignite the smallest spark of something we haven’t had for a while.

Touch of the Fumbles is InDaily’s shamelessly biased weekly football column, usually published on Mondays during the AFL season, occasionally on Tuesdays when the author is feeling particularly smug, and sometimes even on Wednesdays when technology allows.