And so, after 17 COVID-curtailed rounds, a nerve-wracking finals series and a decider that showcased Queensland’s new tourism slogan – “Beautiful one day, torrential the next” – the strangest AFL season in history has ended with the team everyone always expected to win the flag… winning the flag.

Ironic too that the AFL chose the so-called “Sunshine State” as its Grand Final venue, only to schedule it after dark and amid a downpour. Still, Queensland already has the Big Pineapple and the Big Macadamia Nut, so it’s only logical it should also have the Big Dance… even if this year it was more of a “Big Swim” with the early onset of monsoon season.

Things got so bad, there was even talk of delaying the start of the match – which at least would have been consistent with the preceding season.

One can almost imagine Gil McLachlan waking up and checking the morning’s weather forecast.

To emphasise that the match was neither being played in Adelaide (where we enjoyed a mild Spring chill with a top of 17C) nor contained either of the SA teams, pre-game entertainers DMA’S opted for a symbolic Cher cover, presumably as a nod to that time she famously tried to sell her keys to the City of Adelaide on eBay.

The combination of the venue and the time of day made the match itself a bit of an afterthought, in some ways, and it was something of a relief to wake up the next day and realise that this terrible season from hell is finally over and I don’t have to think about football again for a long, long while.

At least until Trade Radio kicked off this morning, when I was like:

Anyway, it’s that time of year when we take stock of the season just gone, unsubscribe from Kayo and duly rationalise the success of teams we hate.

And there’s plenty of solid reasons for wishing ill-will on Richmond.

The obvious one, of course: they’re responsible for as much pain and suffering as any other entity in the history of mankind, more or less. 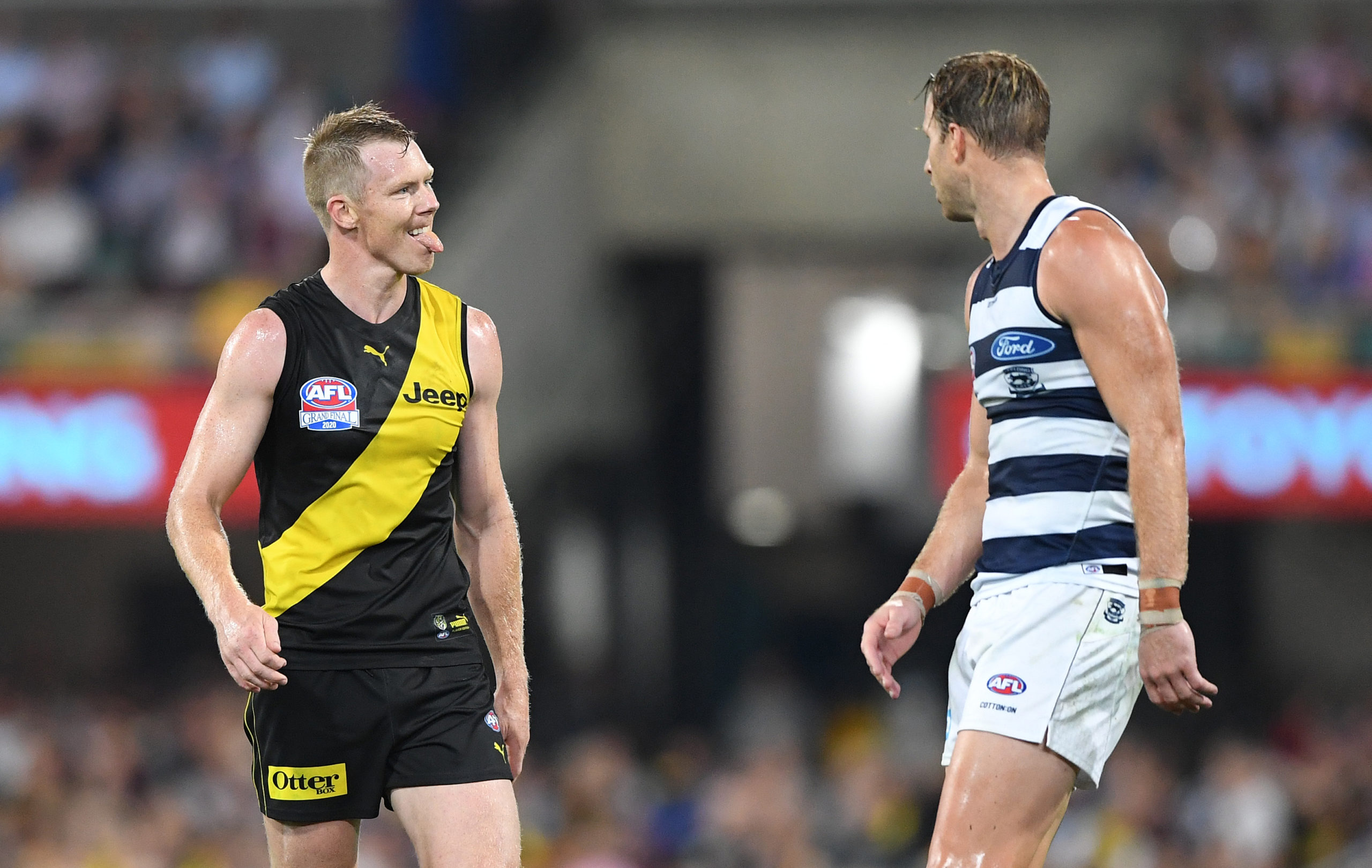 Moreover, their supporters are universally awful.

I know this sounds like a generalisation, but ask yourself this: have you ever met a likeable Tigers supporter?

If you answered “yes”, you are a liar.

Of course you haven’t.

But this year, the worst year many on our planet have yet endured, I put it to you that a Richmond premiership is among the least worst outcomes we might have hoped for. 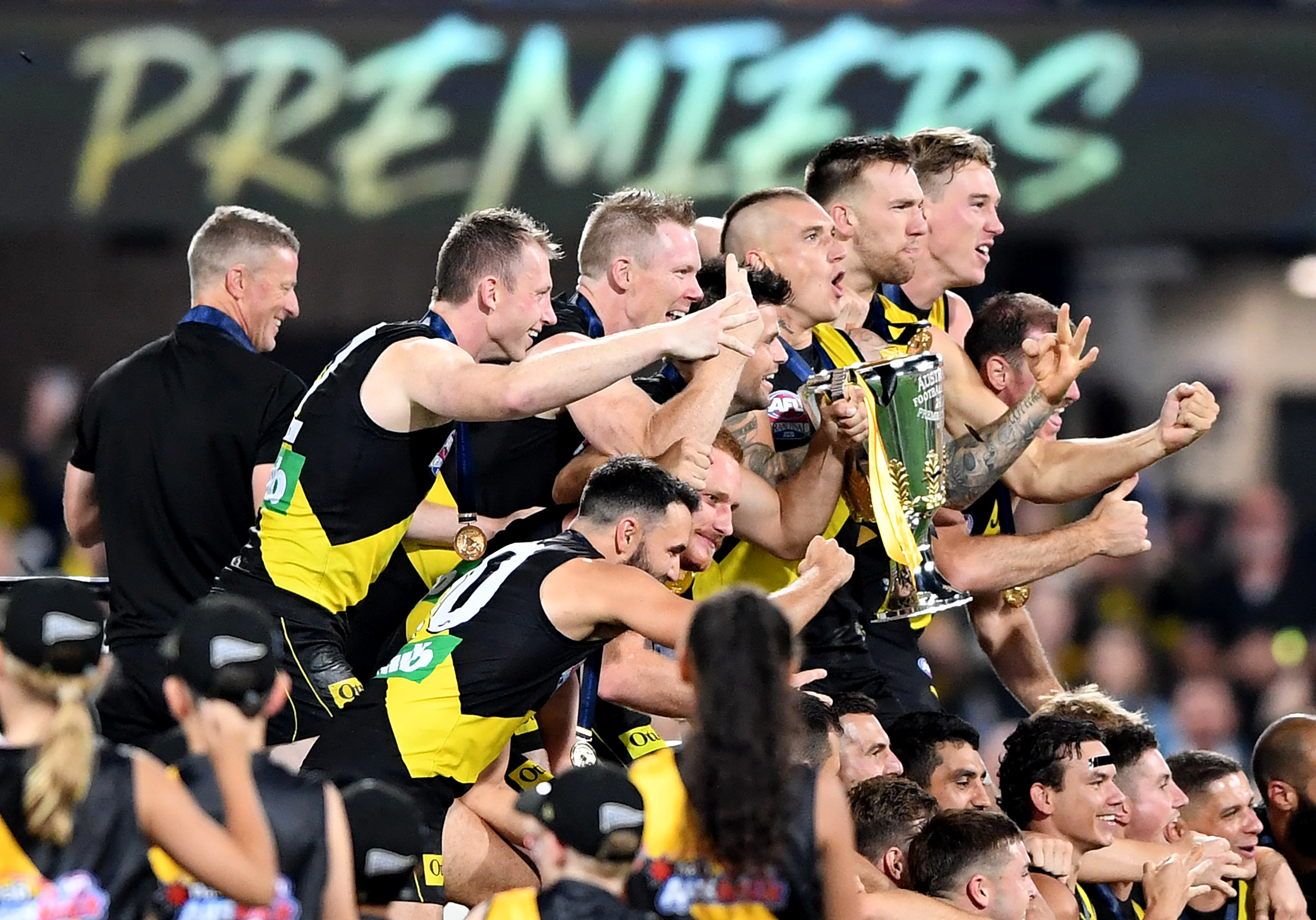 For starters, while I’d certainly never wish the Tigers good fortune – and generally enjoy their occasional losses – most of their players going into Saturday night’s decider already had two premiership medallions to their name.

So, in terms of wishing failure on them, that ship’s pretty much already sailed.

It’s like that moment when Jack Gunston won his third flag with Hawthorn, and I had to grudgingly concede that he probably wasn’t going to go to his grave lamenting that time we rescinded his Mark Bickley Award.

I mean, yes, there is an argument that we should just be pleased that he is a great footballer making other supporters (who are not us) happy through his sheer talent.

But then, let’s not forget this. Paddy won a Brownlow in his first year post-Crows. The same season, we finished fifth and bowed out with an obligatory finals loss on the road. Going into the final round, an own goal of a loss to West Coast, we sat in the top two. Another victory or two – and there were some close losses that year, including to Paddy’s Cats – and we’d have had the proverbial armchair ride to the Grand Final. In a year in which it was won by the team in seventh place.

So it’s not that I’m complaining or anything.

And I’m certainly not bitter – far from it.

It’s just that I’ve always taken the view that it would be better for everyone concerned if Paddy simply never wins a flag, and preferably even another game, for the rest of his treacherous life.

Yes, there was something vaguely cathartic about Paddy stepping onto the field to fulfil his destiny and instead garnering one goal from a dubious free and a dozen forgettable possessions as he sat wistfully in the goalsquare while Richmond ran amuck at the other end of the ground.

Frankly, I can see why he avoided Grand Finals all this time.

And look, it’s not that I’m taking pleasure in anyone’s misfortunes – not a bit of it – but if you freeze-frame the post-match coverage, you can actually pinpoint the second when his heart rips in half.

We shared a moment on Saturday, Adelaide supporters and Danger.

It wasn’t quite old times, but it was something – a moment of empathy, of our trajectories crossing once again in the pathway of footballing life.

It’s like Saturday was Paddy’s way of making up for his ill-timed departure, of saying: “I’m with you in spirit: I too will lose a Grand Final to Richmond.”

And yes, it’s become harder to maintain the requisite spite since our flag window was emphatically boarded up some time around mid-2018.

Now that my club is actively extricating anyone still on its list with a living memory of 9/11, it’s hard to imagine a player of Paddy’s ilk sticking around to help drive our wooden-spoon dynasty.

And the thing about when your former best player leaves is that it’s a bit like a bad break-up. You’re determined for your ex to see you out and about, living your best life.

Rather than stumbling across you face-down in a gutter somewhere covered in your own filth.

But given our current status as the worst club in the AFL, it’s hard to argue we’ve managed to make Paddy feel in any way remorseful about his life choices.

So for now, I’m looking forward to Geelong completing the “teams that lose a Grand Final to Richmond before completely imploding and all their players leaving” triumvirate over coming months.

Which will be particularly sweet given their current penchant for recruiting pretty much every marquee player on the trade or free agency market.

But if nothing else, it would mean I can eventually get back to barracking for the Cats in neutral games.

After all, the team that’s given us 13 enjoyable years of quality “119” gags can’t be all bad, can they?

Speaking of which: the other consolation, of course, was that Port’s bid for AFL glory (notwithstanding that it obviously certainly wouldn’t have counted anyway) fell at the penultimate post.

After which, frankly, any Grand Final outcome was a ‘better than worst case’ scenario.

Moreover, not that it was in any danger anyway, but the prospect of shortened quarters enduring beyond this season makes it likely their Grand Final record will never be broken.

And then there’s this.

For some reason mid-week, the AFL’s social media account saw fit to randomly post match highlights from Adelaide’s ’07 elimination final loss to Hawthorn – one of the most brutal of our impressive array of finals losses.

My initial reaction, of course, was to ponder “Why would you do this, you monsters?” but then I had a rare moment of clarity.

In hindsight, we dodged a bullet that day.

Sure, we’re doomed to die a little inside every time Buddy kicks a match-turning goal.

But what if he hadn’t?

The Hawks went on to lose to North the following week, a match I’d always reckoned we would have won. The Roos then jetted to SA to get absolutely spanked by Port – who were famously, deliciously, steamrolled by the Cats in the decider.

Which means the most likely alternatives to our Hawks heartbreaker were either a) losing a home prelim to Port, or b) setting ourselves up for a lifetime of “119”-type gags.

So, it’s worth bearing that lesson in mind:

Richmond, and their horrible, horrible supporters, endured decades of highly amusing incompetence before becoming the powerhouse they are now.

It’s likely they wouldn’t have the latter, if not for the former.

And after the last four years, I doubt many of them would change anything about the journey to get there.

Which brings me to my final, small consolation from the Grand Final, a minor footnote to the Tigers’ third flag in four years: we didn’t just have a bad day in 2017.

More pertinently, we came up against a much, much better team as they set about creating their dynasty.

So we no longer have to consider it the one that got away. We just weren’t ready.

As Morrissey would say, we just hadn’t earned it yet, baby.

And while it looks like a long time to go before we earn another crack, at least we can always keep rationalising our lack of success in the meantime.

After all, we’ve had 22 years of practice.

Touch Of The Fumbles will return in 2021. Possibly.