Look, I want to make something clear right from the outset.

I’m not about taking joy in the misfortunes of others – particularly when ‘others’ refers to Port Adelaide supporters, and their team’s abject inability to win their home preliminary final having finished top of the AFL ladder after a gruelling 17 rounds.

Very much so, in fact.

However, now is a time for magnanimity.

And after all, these past few days has been tough for a lot of people in SA, as they faced great adversity with stoicism and dignity.

But enough about Crows supporters.

And I do, in fact, genuinely empathise with Port supporters: I too well understand the pain of losing a tightly-fought preliminary final.

But take heart, Power fans. My own team, Adelaide, lost a few close prelims a few years back, but you know what? They persevered, kept trying and never gave up, and now, several years later… um…

Look on the bright side.

At least a few of the players’ families weren’t there to see the game.

And regardless of which team won, the important thing is that a lot of Port and Richmond supporters both got heavily rained on.

Not to mention, of course, the pertinent consolation that this season doesn’t really count.

Which I’ve been saying all along, but which a lot of Port supporters only really cottoned on to around 10.30pm last Friday night, for some reason.

Still, I must admit, even though the COVID Cup will always carry a heavy caveat and this year’s ladder positions will forever be qualified by the curtailed fixture, I was still getting a tad worried about that looming Port premiership.

I mean, can you imagine what it would have been like getting about in Adelaide for the next few weeks – not to mention the next few years – if Port had won the flag?

It would have made lockdown feel like an eminently attractive proposition.

Although, there would have been something deliciously compelling about the prospect of a 2007 Grand Final rematch – bearing in mind, of course, that Geelong’s 119-point margin would need to be reduced to 95 to allow for the shortened quarters.

And it was a match-up that loomed large for much of Friday night – only for the COVID Cup to ultimately slip through Port’s proverbial fingers.

So while 2020 has been a pretty terrible year all round, a year so bad that a Port Adelaide flag in the club’s faux anniversary year appeared its only logical culmination, we have been given a fleeting sign that things can still turn out ok.

Bizarrely, some commentators seem to think the Gold-Jacket-Thieving Turncoat playing on the AFL’s biggest stage is in some way a Good Thing:

Although, to be fair, it’s ambiguous what ‘GF’ stands for in this context – certainly there’s at least one combination of words beginning with those letters that I tend to utter regularly when Paddy appears on my TV screen.

And, of course, as others have pointed out, the author does have a predilection for ambiguous acronyms:

But Geelong’s fairly routine victory over Brisbane was the one sour note on an otherwise fine weekend.

Because, if nothing else, it means I’ll be forced to enthusiastically support Richmond for the second week in a row.

Frankly, this was not something I’d have envisaged on that bleak September day in 2017. Still, at least I’m well versed in the lyrics to their club song.

It also means that two Victorian teams will be playing in the AFL decider for the first time since 2011 – and they won’t be playing it in Victoria.

Still, luckily the AFL has trucked over that small patch of MCG turf, which should make both teams feel more at home.

But there’s something fundamentally strange about having to throw your lot in with the Tigers: even the AFL’s villain du jour, Tom Lynch, is beginning to rehabilitate his public image after a year in which his reputation has taken more knocks than one of his unfortunate opponents. 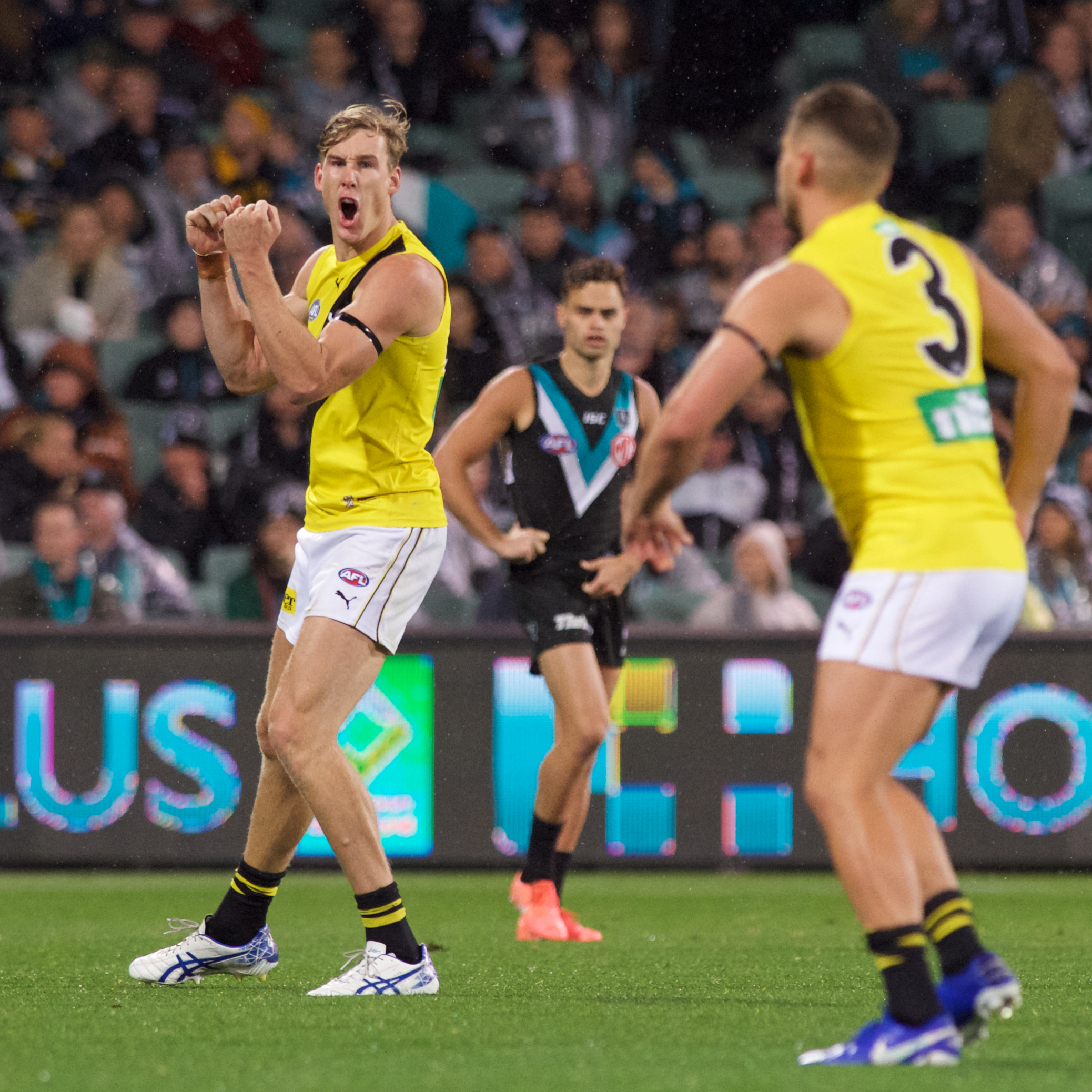 In the aftermath of Richmond’s six-point triumph, Tiger Tom first found himself the target of an irate Port fan who opted to hurl his ‘Luke Beveridge’ at him, only to subsequently offer what appeared to be some choice words of encouragement to a despondent Power-supporting youngster in the crowd.

Because, of course, what you really want right after losing a close knockout final is a pep-talk from the victorious team’s least likeable player.

Still, you can’t say it wasn’t nice of Tom to offer a few words of consolation, presumably along the lines of: “Don’t worry, kid – I used to play for a shit team and now I’m rolling in cash and premierships, so things can get better.”

Although we can’t really be sure the Tiger forward was actually being nice to the kid at all. It’s entirely possible, for instance, he was simply perpetuating his standing as the game’s resident dickhead, offering the young fella a pointed: “Hey kid, look at the scoreboard – see that one goal we won by? I kicked that.” 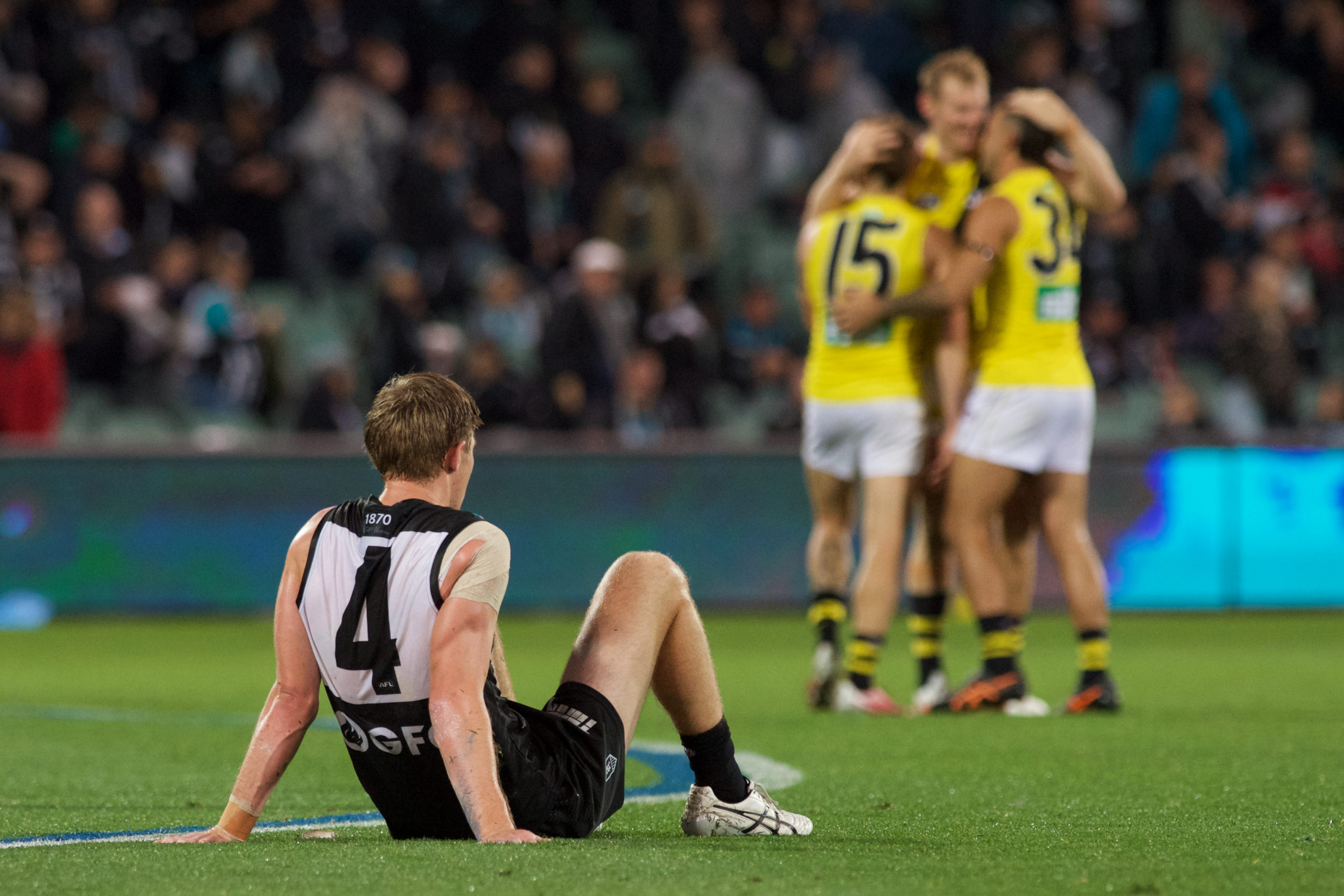 Anyway, while the AFL-watching public’s collective attention turns to two Victorian teams in Brisbane, the post-season machinations continue, with the Crows signalling their intent to return to the glory days of ’97-’98 by appointing the guy who was running the state at the time to chair the club.

The AFL also stepped in to dole out punishments for Brad Crouch and Tyson Stengle’s recent indiscretion, with the former slapped with a two-game ban and the latter four – a harsh sanction, I felt, since they didn’t give him credit for taking a taxi on this occasion.

Then, of course, there was last night’s Brownlow Medal, our annual opportunity to ponder the success of players we either drafted only to see them quit for the lure of Moggs Creek, or planned to draft but somehow never got round to it.

The latest of which duly won last night’s league best and fairest in a canter. Apparently the Crows were keen to recruit SA boy Lachie Neale in 2011 but decided to get Nick Joyce instead (no, me neither). Which is kinda like picking Richmond to win the Preliminary Final but forgetting to actually put any money on them: good in an “I told you so” kinda way, but not actually very helpful.

Neale helpfully shared the secrets of his success, revealing his match day routine is to lie down on the ground and stare into the sky for a few minutes to get his bearings.

Which, bizarrely, is the same as my match day routine. Although I tend to do it after I get home from the game.

Given its random Sunday night scheduling, I completely forgot all about last night’s Brownlow count and by the time I bothered to turn it on, there were only about four rounds left to go. Which was fairly symbolic of our season, come to think of it.

And of course, the usual smattering of players we’d either traded or delisted racked up plenty of votes for their new clubs, such as Gold Coast’s Hugh Greenwood, who finished in a tie for fifth spot.

Although of course, if he was younger and quicker he might have got more than 11 votes. 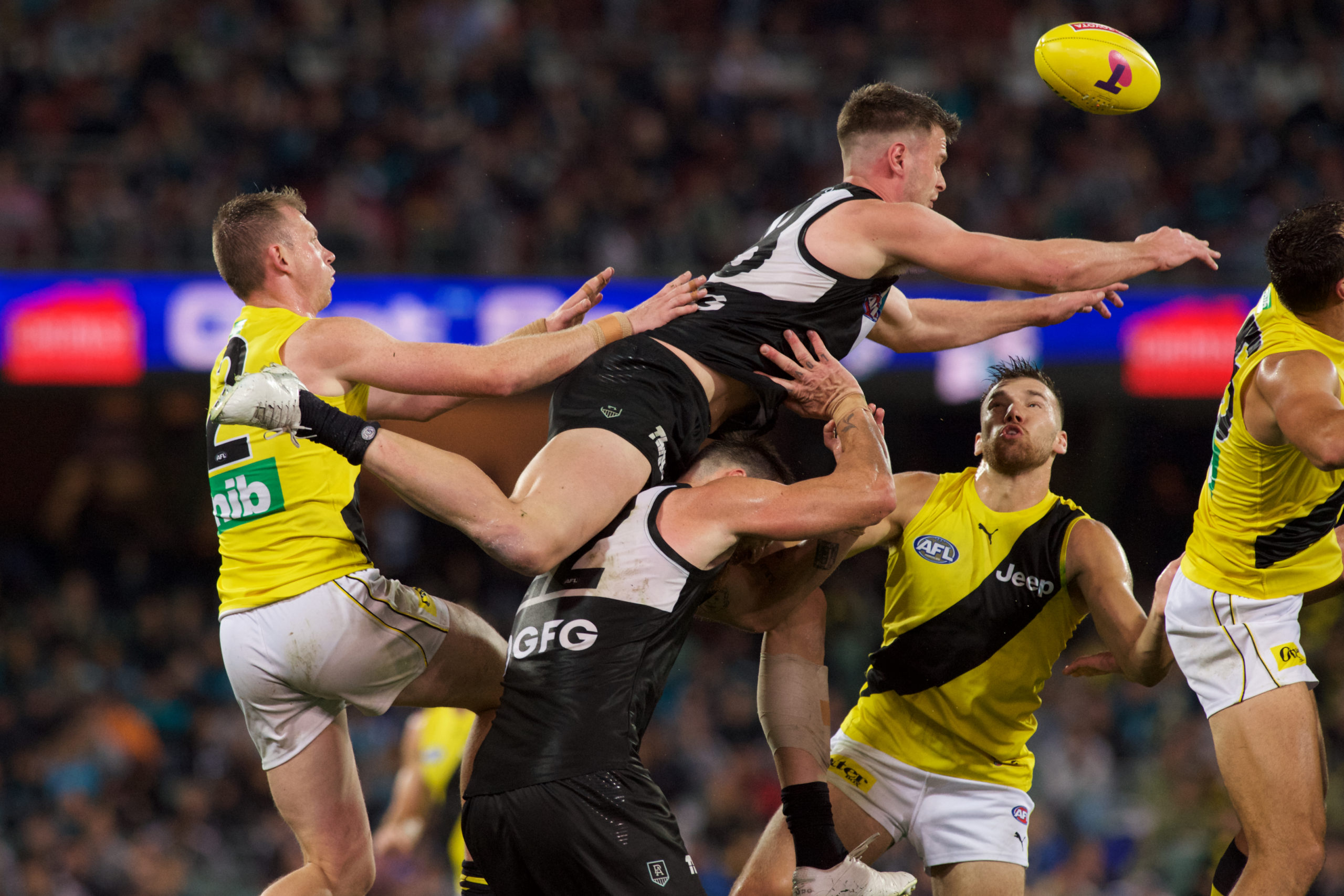 Anyway, even the prospect of a Paddy Premiership can’t dispel the sweet relief that we’ve somehow, however barely, managed to avoid a 2020 worst-case scenario: a Power pandemic. COVID-119.

And, of course, a third flag for the Tigers within four seasons would at least confirm that our Grand Final loss wasn’t simply (or merely, at least) the case of us dropping our proverbial bundle on the big day, but the start of a genuine footballing dynasty.

Just not ours, though.

But take heart, Port fans: losing to Richmond is character-building. And based on our recent experience, I can confidently say that having lost to the Tigers in a final after finishing top of the ladder, nothing else is likely to go wrong for you at any point in the near future.

In fact, the best thing you can probably do now is get the entire squad together for a team-building post-defeat retreat.

I hear the Gold Coast is nice this time of year.