Hell, we’re not even as bad as the worst team from last year, or the year before that.

And there’s a highly unlikely chance that we’re not quite the worst team of this year.

Moreover, even if we are, we’re not right now – at this precise moment.

In fact, given we’ve taken a fairly deliberate decision to be Crap for a bit in order to (hopefully) Not Be Crap at some not too distant future point, there’s a bunch of teams I’d consider worse off than us right now.

Specifically the ones that are Accidentally Crap, as opposed to Calculatedly Crap. Or the ones, like Melbourne and Essendon, that are just Sort-Of Crap, but whose respective lists suggest there is no sensible reason for them being so. 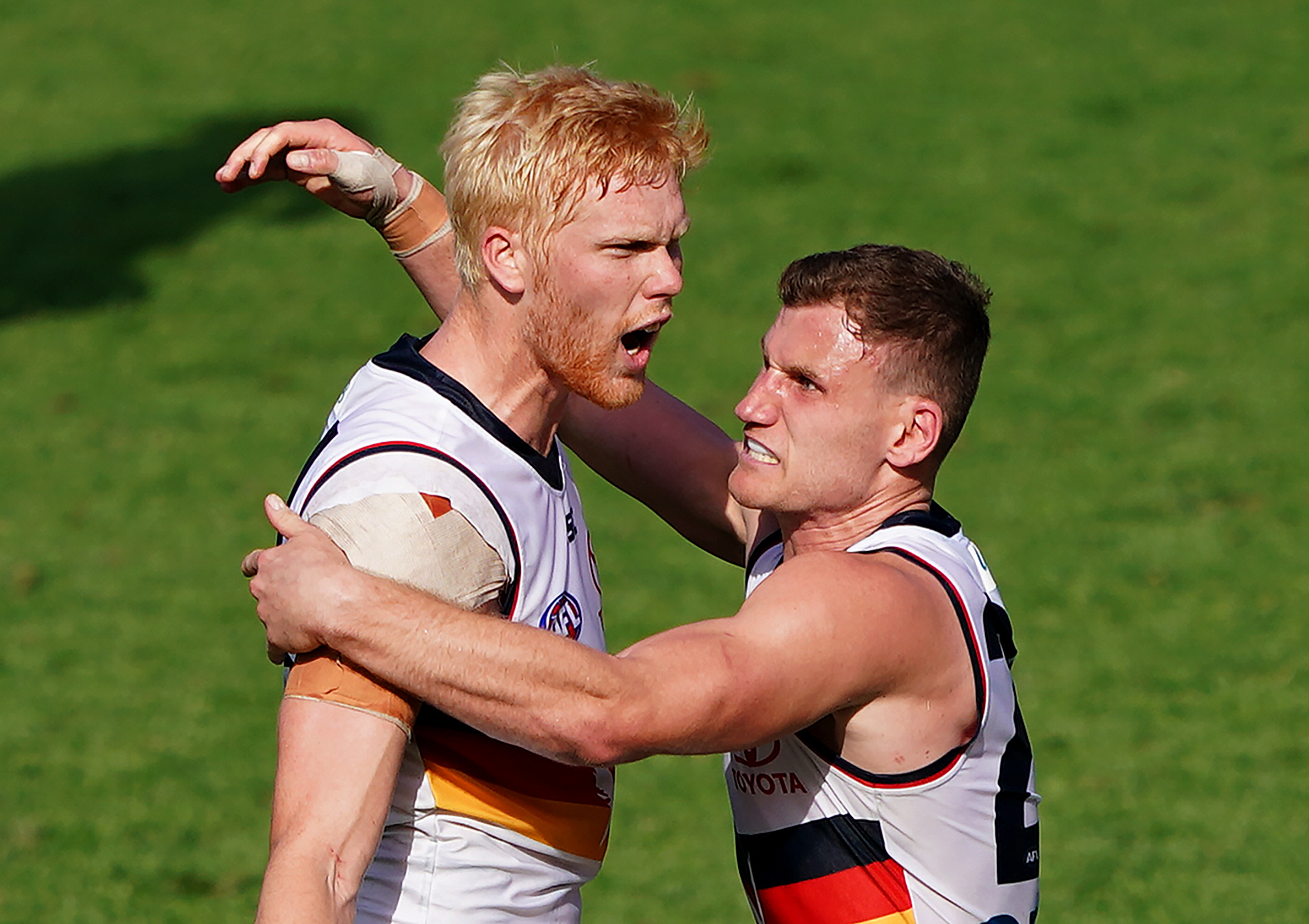 Which is all a bit odd, really.

I mean, if you’d told me at the start of the year that we’d win three matches in September, I’d certainly have taken it.

But even knowing now that September ain’t what it used to be, if you’d told me back in our Queensland hub malaise, or at any one of our various milestones of incompetence, that we’d be heading into the last match of our season on a three-game winning run, I’d have looked at you like you were some kind of dangerous lunatic and then quickly taken my leave.

And yet, here we are.

After the season that we’ve had, and despite finishing where we will, we’re suddenly, somehow a decidedly well-adjusted supporter base.

And, thanks to the vagaries of the AFL fixture, today’s column is something of a double celebration: where for most of this year, I’ve had to plumb the depths of my wretched soul to dredge up my darkest thoughts on each of our 13 successive losses, this week we instead get to ponder not just one win, but two.

The signs were there a couple of Thursdays back, when GWS and Carlton – our looming adversaries after that breakthrough win against the wounded Hawks to kickstart our September campaign – faced off in the dourest of dour arm-wrestles.

A game that was mostly a great example of that famous Leigh Matthews Theorem that you can’t come back if you need more goals than the number of quarters remaining.

Carlton kicked all but one of their five majors in the first quarter; the Giants kicked all but two of their six in the last. And at the main break had only broken through for a solitary goal.

Were it not for our well-founded and long-established lack of confidence in our own side, that should have been enough to warn us that our hard-earned number one draft pick may not yet be safe.

Indeed, it’s clear from their recent endeavours that the Kangaroos are making a concerted charge for our most prized possession:

Leaving us, for all our considerable efforts, with a mere draft pick Number Two. Always the bridesmaid…

Which could mean that yesterday’s game could prove the second time in as many years that Carlton have failed to provide us with a Number One draft pick.

Still, as disappointments go, it was a highly enjoyable one.

This is the kind of disappointment I could get used to. 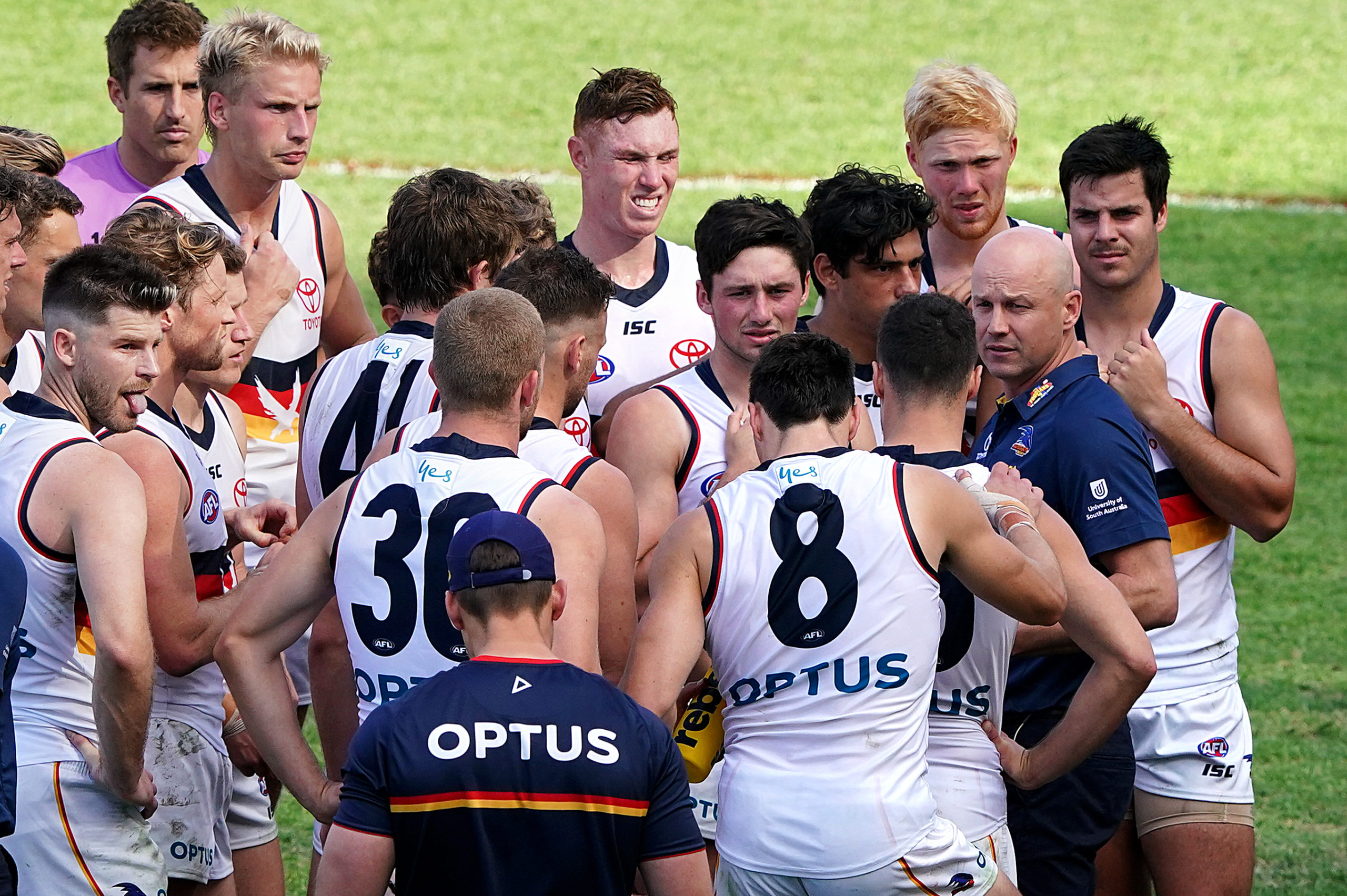 As could poor old Bryce Gibbs, who rose to the irony of his swansong against the team he no doubt regrets ever having left by playing, for the first time in almost two years, a game that would unambiguously see him retain his spot – in his final ever match.

Given we’ve treated him so badly, and despite all the frustrations along the way, I was magnanimous enough to buy him a nice farewell card, which I felt summed up his decision to join our esteemed club: 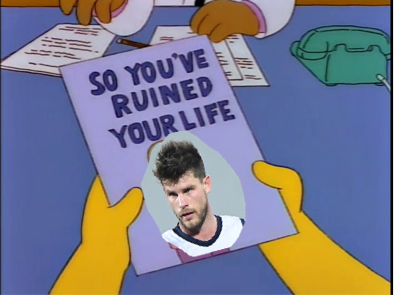 Still, Bryce wasn’t to know when he joined the 2017 minor premiers that the Crows were facing the most rapid descent since that elevator in The Omen 2.

But it was nice to see him play without the weight of the world on those heavily-patched shoulders for once, and be chaired off by his beloved teammates. Who… um, both played for Carlton.

And why not? They have, after all played a lot of games together. Even won a couple of them.

Still, given his understandably-divided loyalties, this was a game in which Gibbs – much like the Crows – couldn’t really lose either way.

One thing though. Shouldn’t there be some rule that when the script demands a retiring player kicks for a final-minute goal, they just let him have it – even if he misses?

Seriously, AFL: just give the poor bloke the goal, you officious bastards! 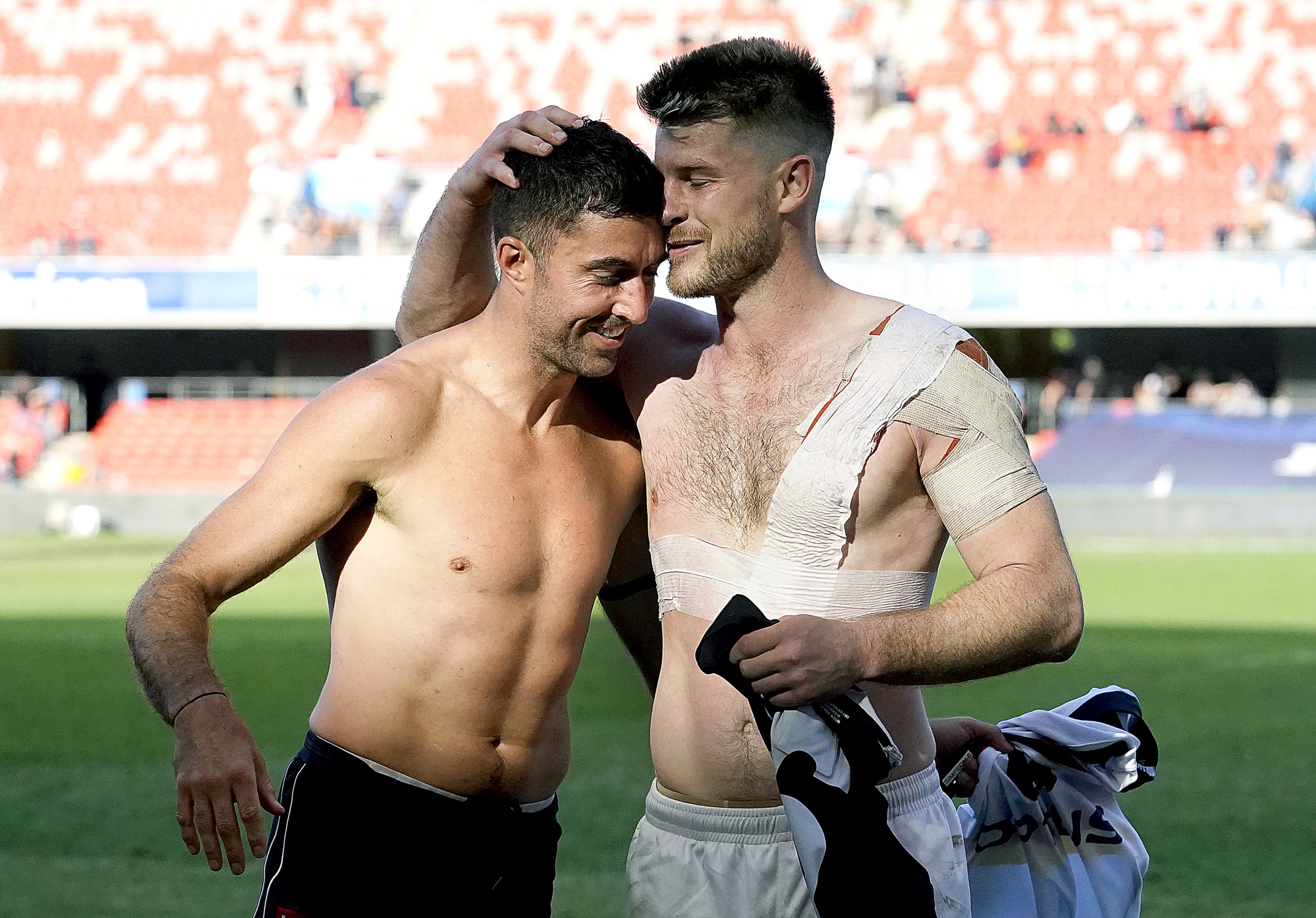 Torn as to which guernsey he should wear, Bryce opted to split the difference. Photo: Dave Hunt / AAP

It was a similar tale the previous Tuesday, when our twilight game against the GWS Fruchocs yielded a result that was, appropriately enough, Delightfully Unexpected.

In fact, I’d go so far as to suggest that Adelaide should be earnestly submitting a request with AFL House to play as many fixtures as possible next year at 5pm on a Tuesday afternoon. 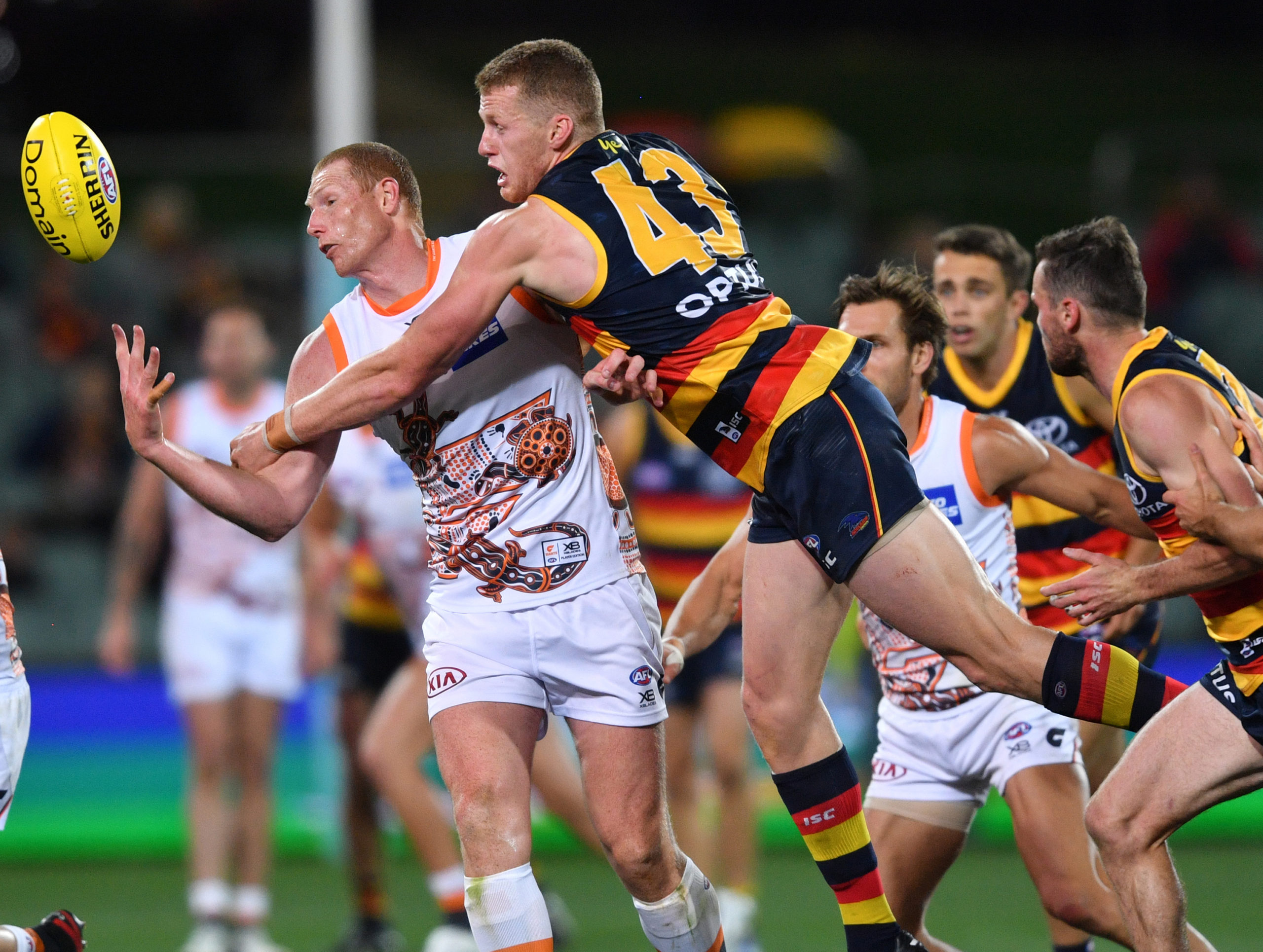 I’ve no idea how the league alighted on such a stroke of scheduling mastery, but its wacky football-when-you-least-expect-it mantra for 2020 conjures up mental images of AFL fixturing boffins locked in dank offices poring over a table-full of calendars, before one clicks his fingers triumphantly:

BOFFIN A: “Here’s an idea: a double header starting at, like, 4pm on a Tuesday arvo!”

[Boffin B nods with mustered enthusiasm]

BOFFIN B: “That sounds… er, great. Or – could you maybe play a match or two on, say… a Saturday afternoon…?” 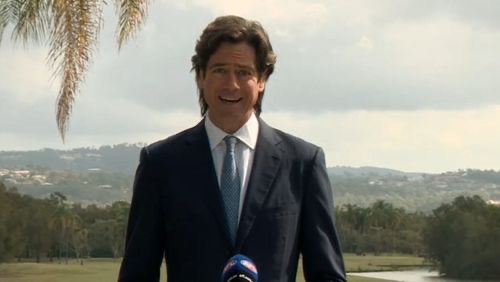 Gil McLachlan, with his lovely hair perched on top of his head like an exceptionally attractive loaf of bread.

It’s just another sign that the Melbourne lockdown is taking its toll on the league’s officials, as we saw when Gillon McLachlan recently emerged from his COVID bunker with an announcement that stunned the nation.

No, sorry – a haircut that stunned the nation.

The announcement, on the other hand, was much as expected: that the Gabba would host a night decider in late October.

But Gil’s Lockdown Hair was really quite confronting, hammering home the true extent of the torment Victorians are facing every day.

Unless of course he’s just doing some ‘Tom Piotrowski’-style corporate rebellion and refusing to groom himself until St Kilda wins a flag or somesuch.

Anyway, for the first time, the Grand Final is Queensland-bound, with Richmond now widely seen as the premiership favourites.

That’s despite the Tigers’ well-documented off-field dramas, which prompted concern and outrage from authorities. Most of them, anyway.

And while SA missed out on hosting the Grand Final, the hard sell wasn’t a complete write-off: the AFL magnanimously decided that the game could still be played at Adelaide Oval in a Worst-Case Scenario.

What an honour it would be, indeed, to host the nation’s pre-eminent sporting showcase in the event of an outbreak of deadly disease in the first-choice location.

In fact, I hope our Tourism honchos are busily jotting down ideas for a new marketing campaign predicated on our status as ‘the Back-Up State’.

“South Australia: when all else fails”, or something of that ilk.

‘Adelaide: Gateway to somewhere else’? 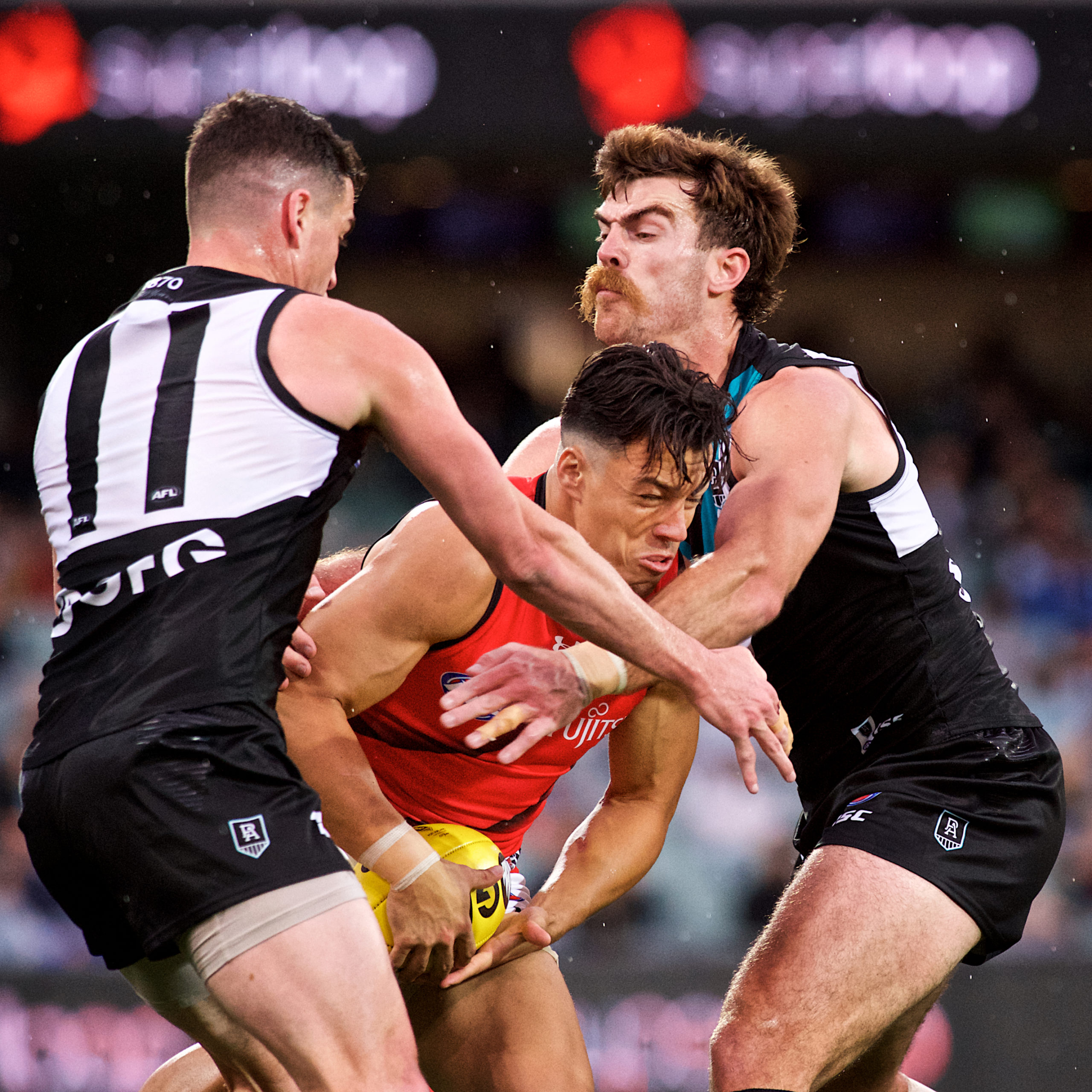 Anyway, I’m not complaining: the top-two ensconced Port Adelaide will now have to earn their meaningless 2020 flag by travelling for it, just like everyone else. Except Brisbane.

And fair play: they’ve remained top of the ladder all year, and the fact they’re gearing up for a genuine Premiership tilt should rightly prompt almost as much excitement amongst their supporters as has our wooden-spoon side winning three on the trot.

And what better year for Port to make a charge towards that ‘One Day in October’ than this one, when we as a nation collectively mark 119 years since Federation? 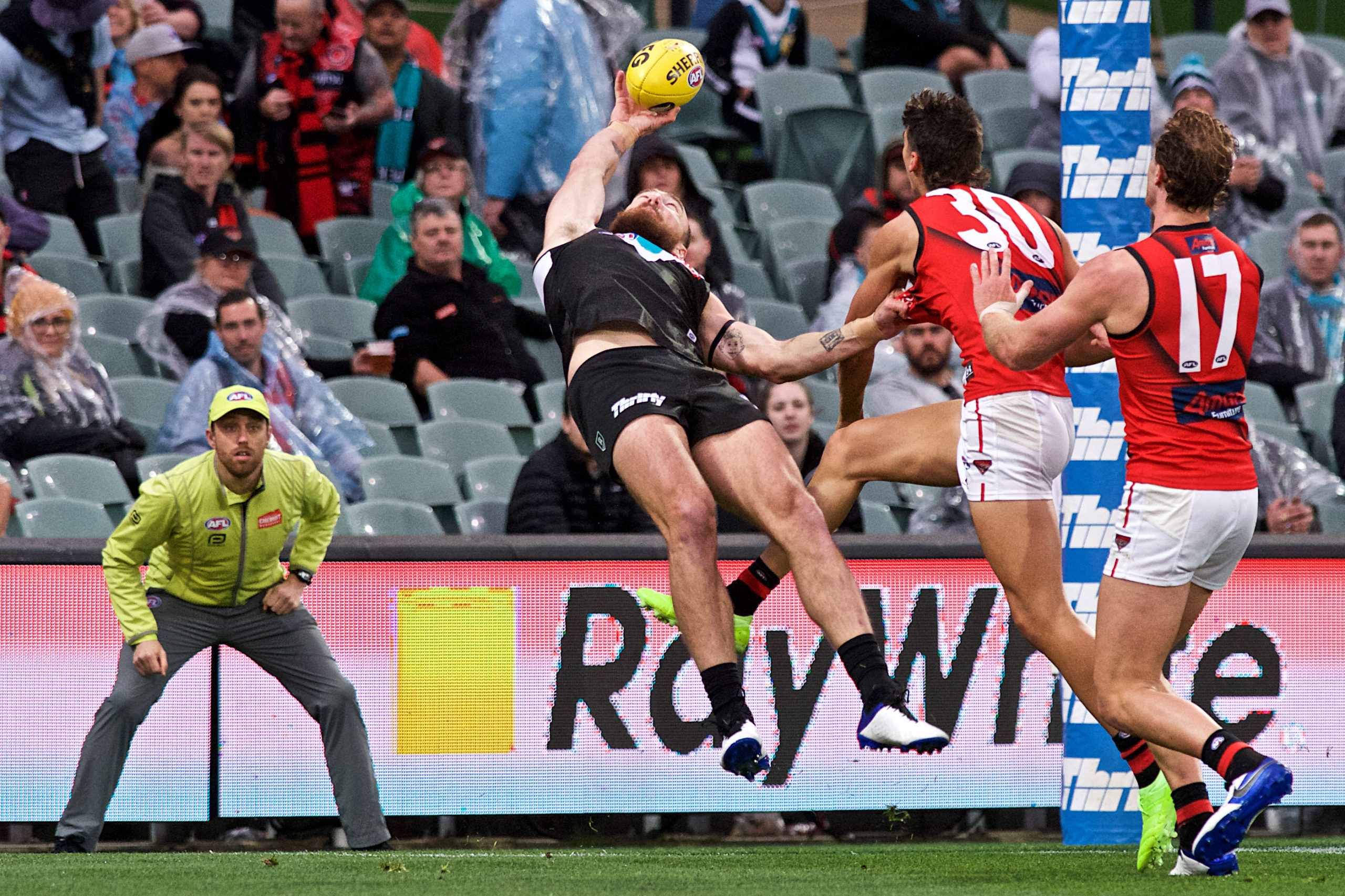 Charlie Dixon takes an admittedly Not Bad At All mark – something, by the by, he barely managed to do recently against Geelong, against whom he’ll probably play in a Qualifying Final. Just saying’. Photo: Michael Errey / InDaily

As for the rest of us, we’ll need to find something to do to take our minds off it all.

Play a board game, perhaps. 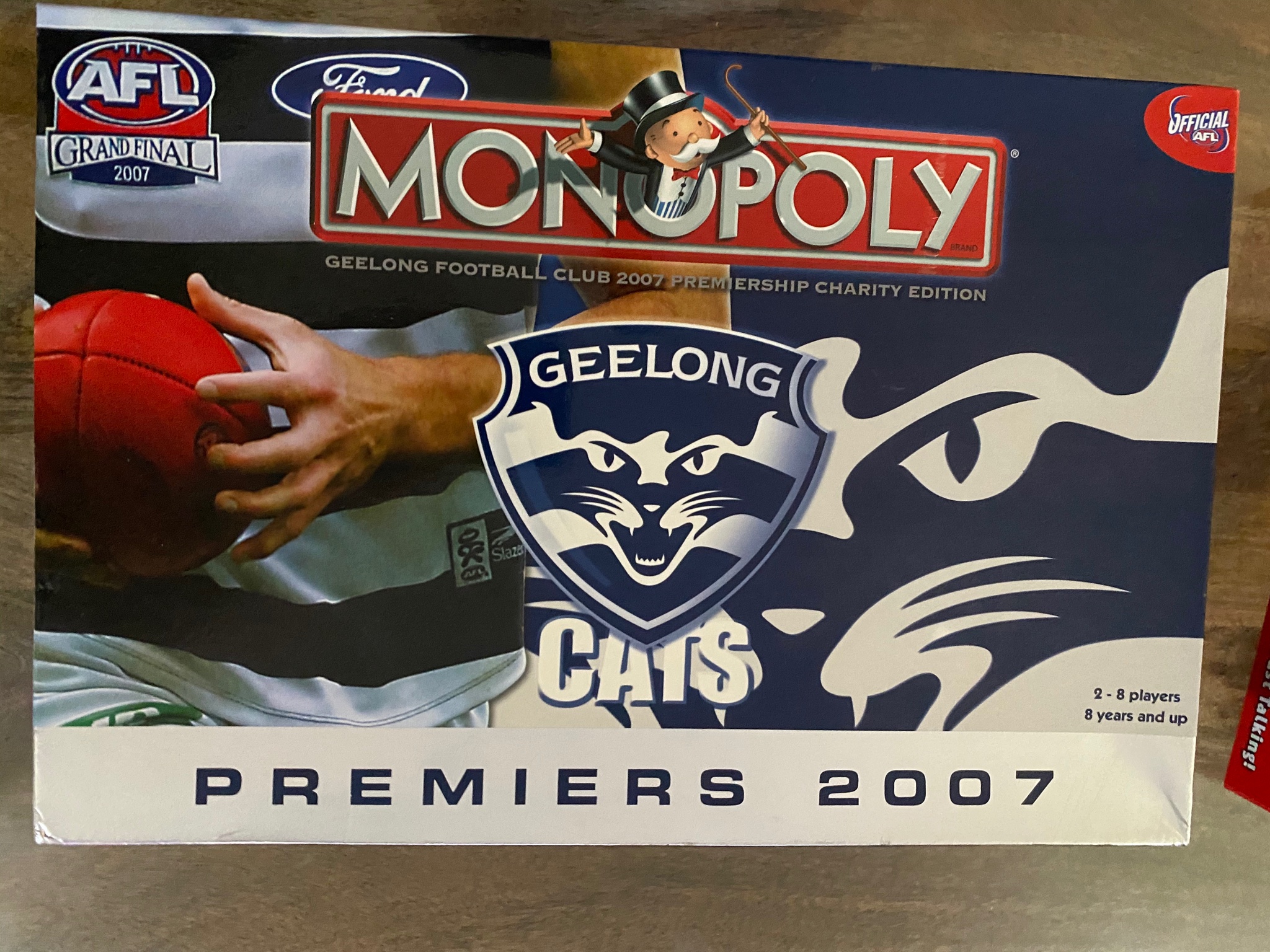 Because there’s actually something strangely comforting about hosting the Tigers as we send off our mostly-horrible 2020 campaign.

After all, what better way to farewell our first wooden spoon season than with a homage to the fixture that inspired it?