A US football coach once famously said ‘Winning isn’t everything; it’s the only thing’. And, in this case – he’s bang on.

An unlucky-sounding 13 months since Adelaide’s last victory, and after a genuinely unlucky 13 rounds without a win under Matthew Nicks, last night’s long, long, long-awaited breakthrough is literally our sole moment of unalloyed celebration in this turgid turd of a season.

As it turns out, 13 ain’t such an unlucky number round these parts… 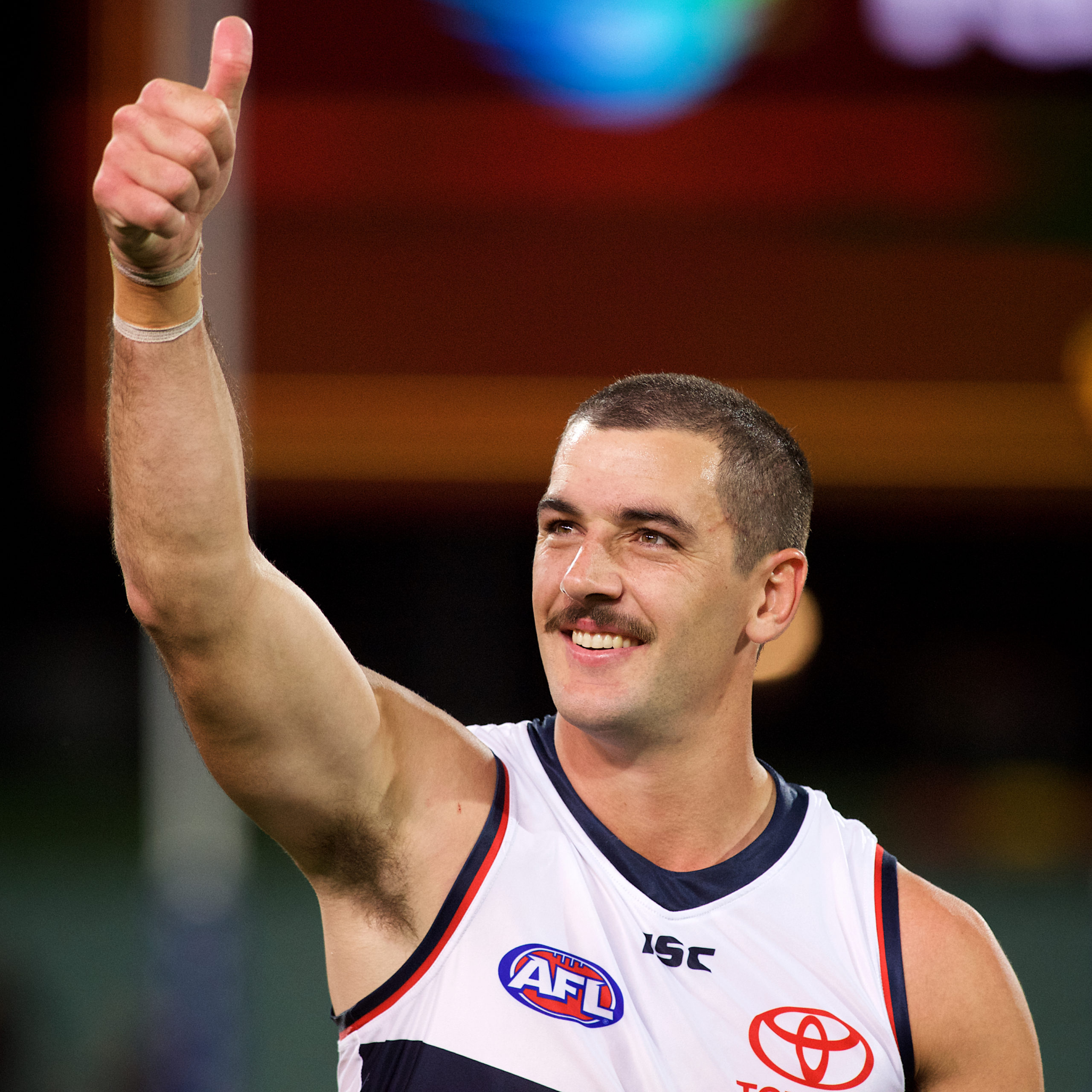 Of course, this was always going to happen.

A win was inevitable the moment the fixture was announced, revealing that our Tuesday arvo home-but-away game against Hawthorn was conveniently scheduled to coincide with my son’s 9th birthday.

My son who, unlike his old man, seems to consider watching football a curious but fundamentally stupid pastime.

For which, to be fair, I can’t really blame him, given the aforementioned past 13 months.

Anyway, it was entirely consistent with one of the many annoying threads of season 2020, which has previously seen our first home game to which spectators were magnanimously allowed – a mid-July Monday night, of all things – randomly coincide with my wife’s 40th birthday, and the rolling fixture thereafter clash with a multitude of other prearranged commitments.

Still, invoking Sod’s Law, the fact that I could neither attend nor potentially even watch much of yesterday’s fixture appeared a good omen, virtually ensuring our long-awaited victory. 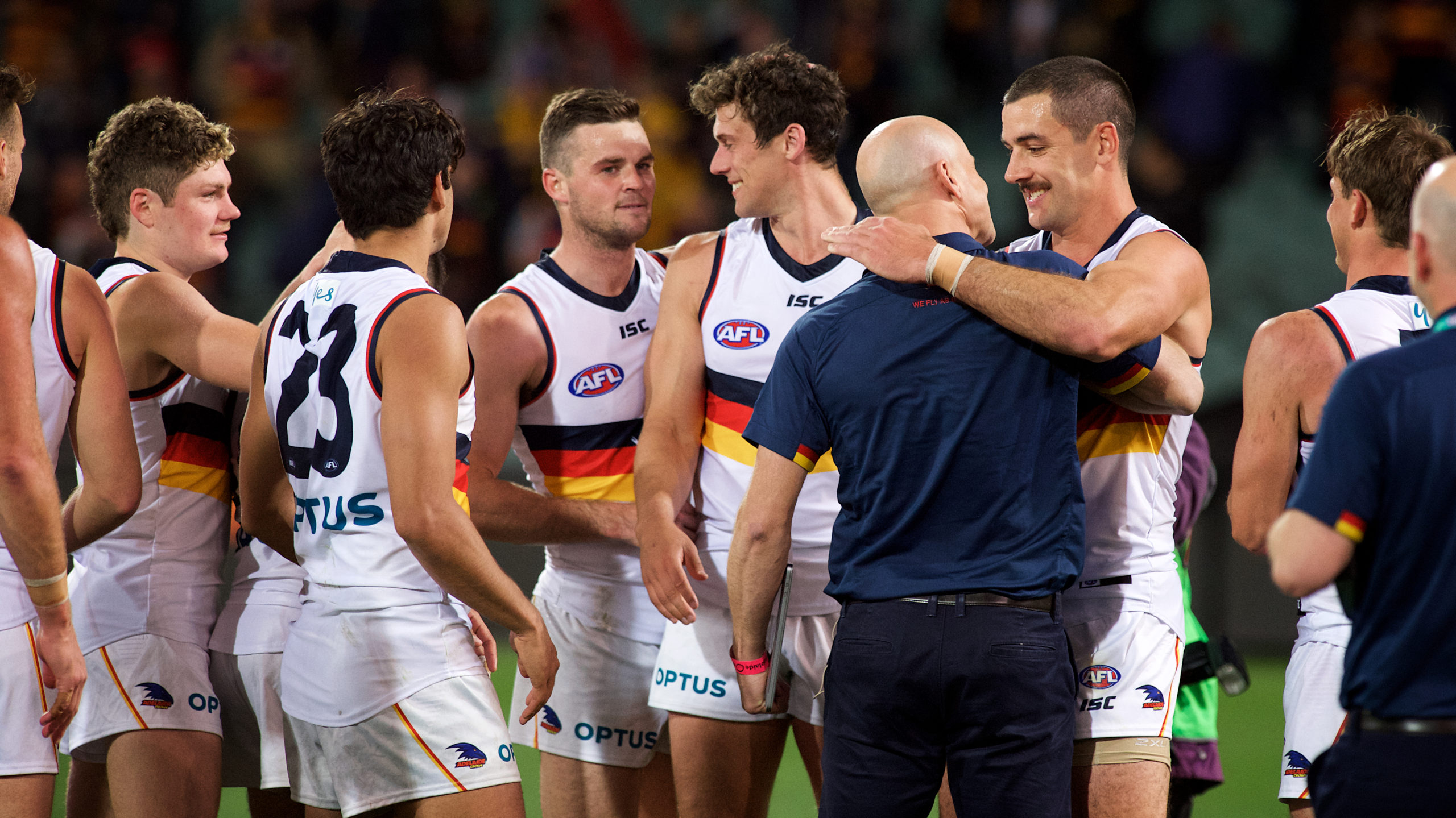 It’s possible too, of course, that the fact we were facing an opponent that had lost eight of their last nine games in a nominal away game at our home ground – and who were playing their third match in just ten days while we were coming off a nine-day break – also had something to do with it.

Mind you, those who believe in omens might have also recalled that the previous longest AFL losing streak by a non-start-up club was Freo’s in 2001 – which was finally broken by… yes, Hawthorn.

Still, it left me with a dilemma: wholeheartedly celebrate the anniversary of the birth of my beloved firstborn, or tune in to watch my perpetually crap disappointment of a football team.

I did note in the pre-game coverage that the Port supporter who mans the PA at Adelaide Oval – whose previous insistence on spinning The Killers help trigger a spate of Grand Final PTSD – opted to kick off proceedings with INXS’s ‘Don’t Change’: hardly the ideal message for a team that’s lost the last 16 games straight. 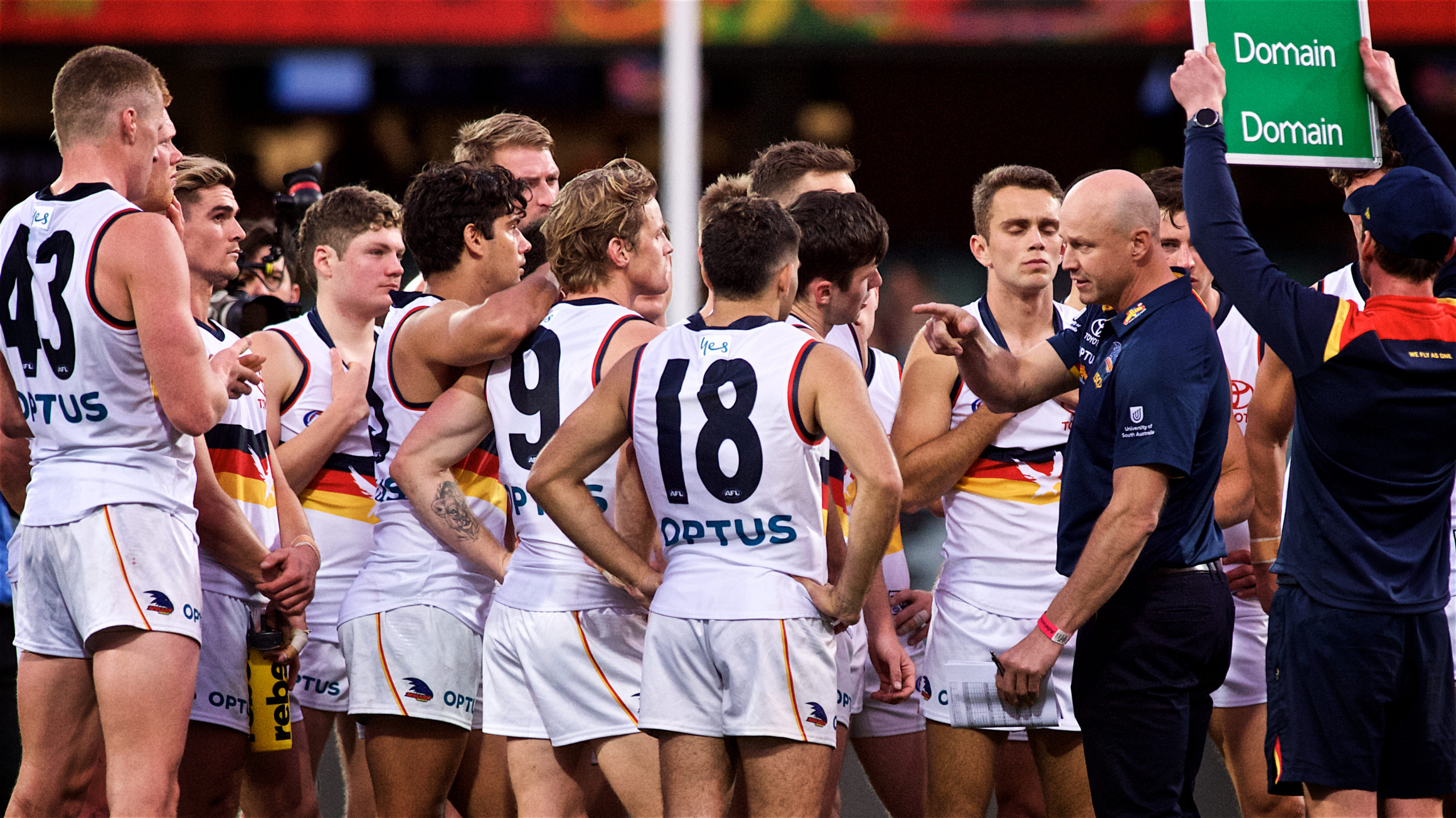 In years gone by, after any given win, I’d probably be writing now about our frustrating inability to convert chances, or why we needlessly kept Hawthorn in the game until the dying stages despite bettering them across the ground all night, or lamenting our unpredictable form, our problematic percentage, a certain former coach’s propensity to repeat sweet nothings about “field position” ad nauseum, the quality/quantity/price of the hot chips at the Oval, or whatever other gripe might come to mind.

Today, as that US football coach pointed out, the win is the Only Thing. 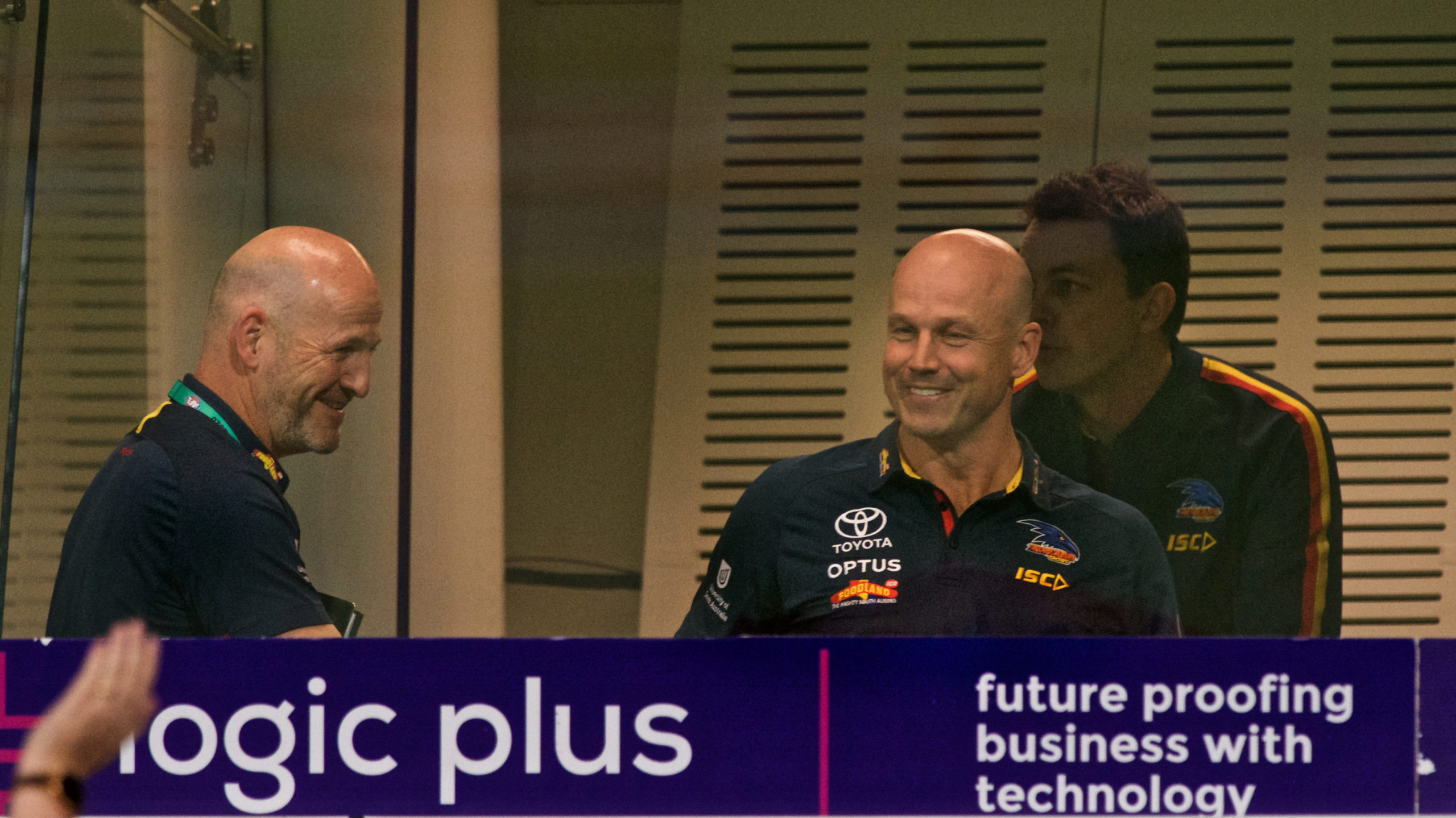 It kinda emphasises how far, and how quickly, we’ve fallen, that a lone victory over a humbled opponent – the sort of win that in any other year would have been unremarkable and forgettable – is itself cause for such giddying, if relieved and slightly wounded, celebration.

And it was a win that promised something more.

(Hopefully not too much more just yet, of course: you’d hate to go through all of this only to throw away our hard-earned draft bounty with a late-season flourish.) 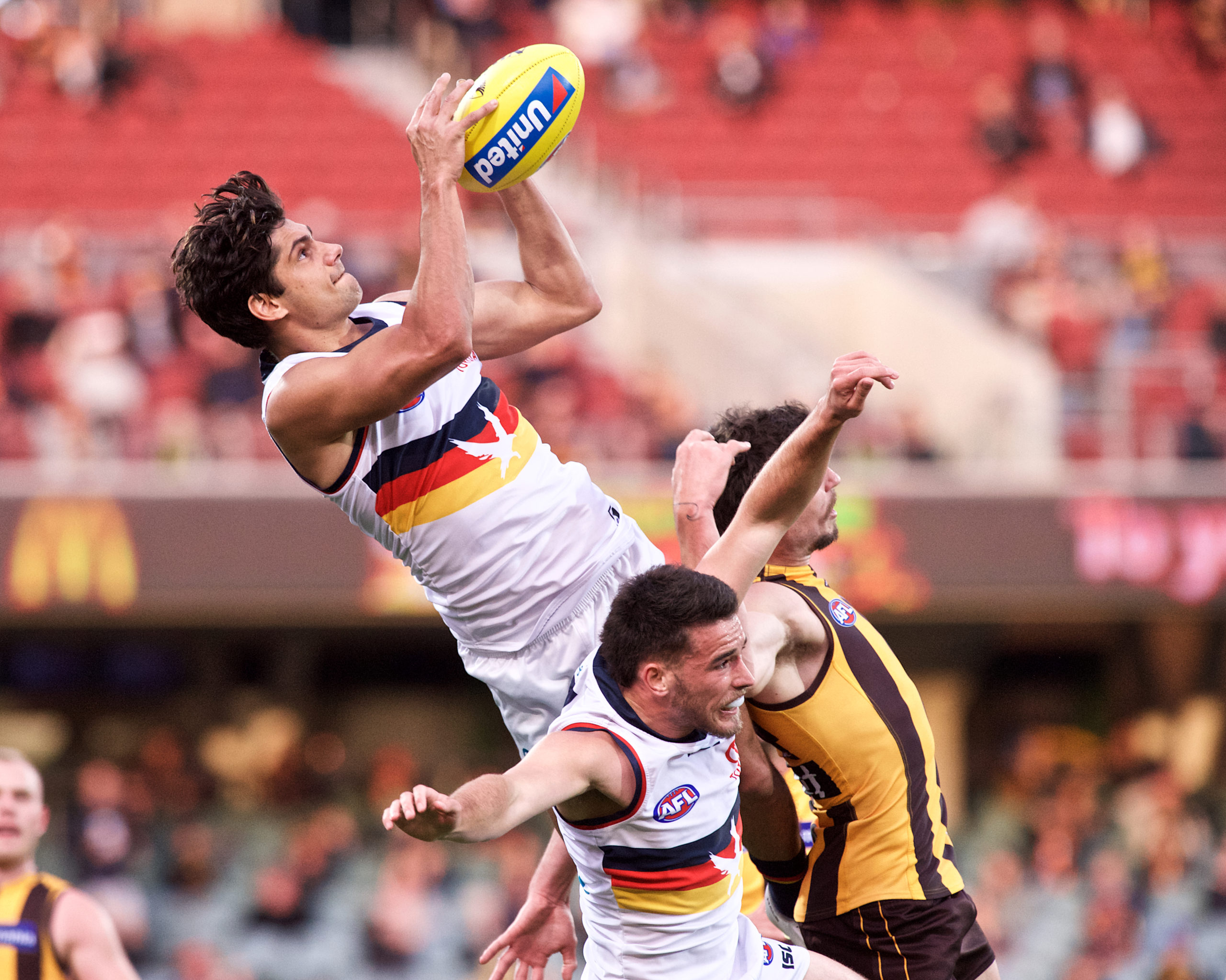 But there were moments there: Stengle and McAdam continue to give glowing glimpses, Jones chipped in with a couple and if it weren’t for his choice of haircut, Schoenberg would look back on this game in years to come with pride – particularly the first of his two goals, a cracker from the boundary in the third. 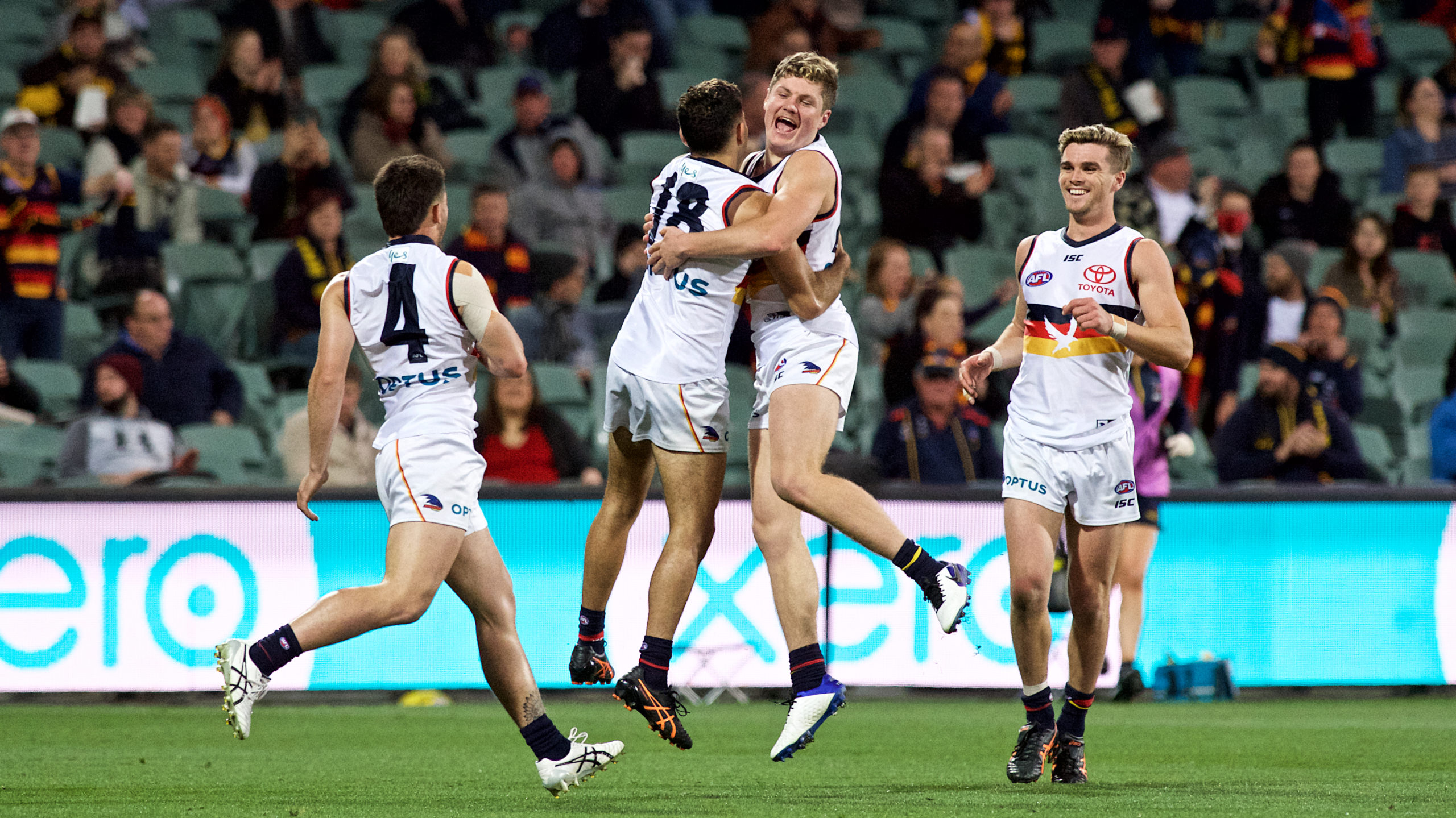 And then there was the sealer from Murphy.

(Note to AFL players: before any crucial final-quarter kick for goal from the boundary, make a point of spending a good minute or so rearranging the chairs, cables etc behind you and ushering any lurking photographers or training staff out of the way: this approach always ends well.) 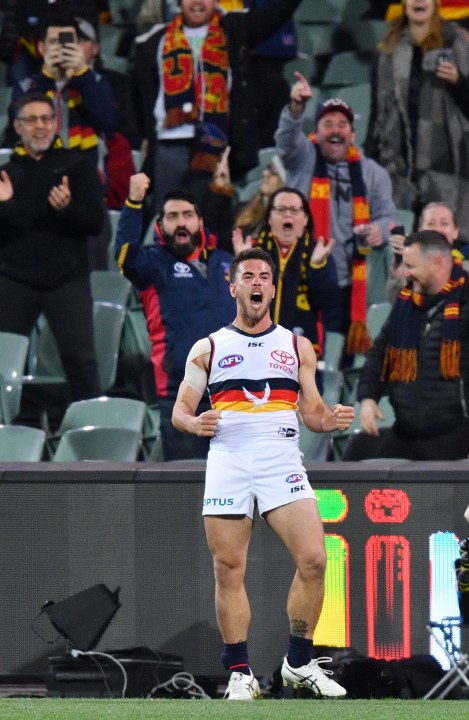 Murphy avoids tripping over the array of debris he cleared from the boundary as he celebrates his clutch goal. Photo: David Mariuz / AAP

That was the moment we knew that the famous ‘Leigh Matthews Theorem’ no longer applied and there would be no Hawthorn resurgence.

Not this time anyway.

And not to read too much into it, but I note the 35-point lead at the final siren equals the winning margin of our last Grand Final triumph.

And just like back in those heady days, we waited until September to turn it on.

But, since this could well be our last September victory for a good while yet, I propose we mark the moment with unbridled – and, yes, undeserved – celebration.

A public holiday, perhaps. Or at least a reassurance from Rob Lucas that any boss who sacks a worker for not turning up today is a bum.

After all, with every hard decision in football – and there have been a few of them of late – we are reminded that it is “a win-loss industry”.

Which is helpful, because we’ve seen quite a bit of the latter recently, and stuff-all of the former.

Football fandom is about the destination, but for now the journey – laced with joy and frustration in unequal measure – is all we’ve got.

And it hasn’t been much of a journey of late – a dizzying fog of defeat, off-field controversy and a Groundhog Day-meets-Kafka recurring dream of an injury list, in which every week Milera is poised for a comeback that never actually arrives.

But amid our first genuine ‘Rebuild’ in three decades, last night proved a genuinely new experience for long-suffering Crows supporters, who for the first time now understand the sheer joy of seeing your team win after more than a year of loss.

It’s not everything. But it’ll do for now.

Touch of the Fumbles is InDaily’s shamelessly biased weekly football column. It is usually published on Mondays during the AFL season – but on this occasion, the author simply couldn’t wait that long.