By now, you’ll have heard plenty of stuff about why you should bring the AFL Grand Final to South Australia.

For a start, we’re pretty much COVID-free for now, with just one active case in the state as of yesterday (no pressure or anything).

That means while you guys in Victoria are living the hard-knock lockdown life, here in SA our biggest worry is a stern talking to from an overzealous COVID marshal.

Our drinking water may be nothing to write home about, but it doesn’t need to be boiled before consumption, so that’s certainly a plus.

We also spent quite a bit of cash a few years back doing up Adelaide Oval, which is as good a venue in which to watch your team lose several consecutive games as any in the world.

Sure, we’ve had a few false starts this year, you and SA.

I hope we weren’t outta line with all that ‘fly in, fly-out’ stuff, where the Premier made you guys put together a business case based on teams coming and going because he wasn’t a fan of your ‘hubs’ concept, only for SA Health to reject your business case because they didn’t like the ‘fly in, fly out’ concept either. Or when we begged you to schedule this year’s sole Showdown (which we don’t really talk about anymore, actually) in Adelaide rather than the Sunshine State, and then when you said that was ok we informed you that actually that wasn’t very convenient and all the match-day and broadcast officials would have to arrive two weeks early and isolate or you could stick your stupid Showdown where the sun don’t shine (ie Adelaide).

But we’ve come a long way since those days.

We’ve allowed Hawthorn to settle here for a while, even though we don’t like them all that much because they keep beating us at home, even before we were unspeakably crap.

We’ve hosted plenty of games at the Oval, even non-SA games such as last week’s Bombers/Hawks nailbiter, a game that would have gone a long way to entrenching the convenient ‘4pm on a school night’ timeslot in the nation’s collective heart.

Plus, of course, hosting the Grand Final would be a massive boon to the SA economy, with the prospective 25,000-strong crowd bringing a critical mass to the CBD not seen since every home and away game played at the Oval every other year since 2014 (at least, if you divided the number of attendees in half).

It would also be a great selling point for the state – as we all know, you can never go wrong putting Adelaide Oval at the forefront of a tourism pitch.

So, naturally, after hearing all this, you’ll be thinking Adelaide sounds like a pretty damn good bet for that One Day in September October late 2020.

Which is why it’s very important that you immediately and utterly perish that thought!

In fact, these are the words you should be uttering when the AFL Commission meets tomorrow:

And don’t just take it from me. Why not ask your own Premier?

But why, you say?

What possible reason could a (reasonably) proud-ish South Australian (resident) have for arguing against the nation’s pre-eminent footballing showcase being played in my own backyard?

You’ll have noticed, Gil, that the entire world has been cloaked in misery and torment since early this year.

And it is no mere coincidence that Port have been sitting on top of the ladder for much of that period.

In fact, since their first game in Round One, they only left their lofty summit for about 17 or so hours between the end of Friday night’s Geelong/Bulldogs game and the final siren of their Saturday arvo win over Sydney.

And frankly, those 17 hours were about as good as 2020 has gotten thus far. 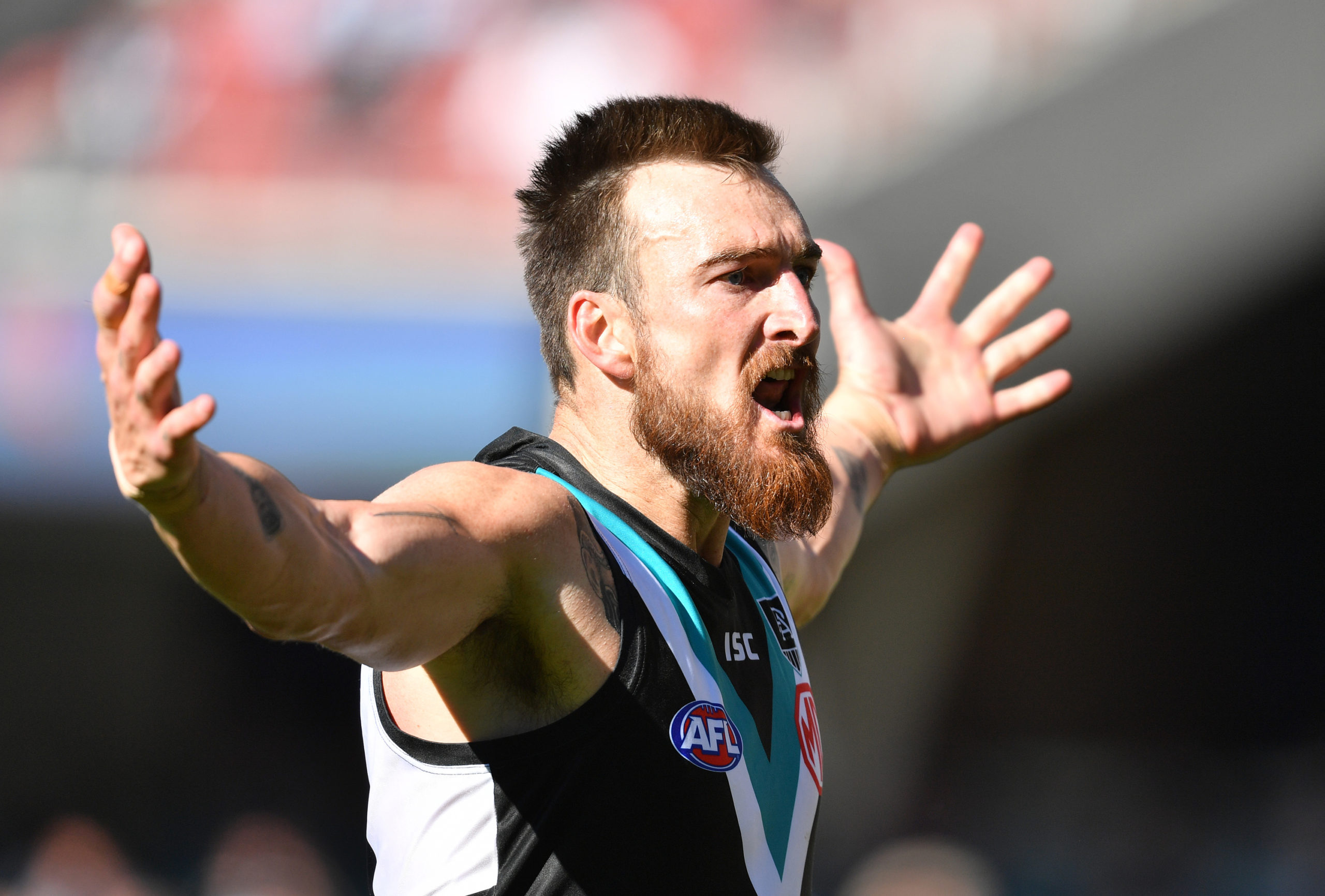 Proponents argue a local GF will be *this* big. Photo: David Mariuz / AAP

And given their remaining draw is about as soft as the MRO assessing a diving Richmond defender, we obviously expect them to be thereabouts in September October late 2020.

And that’s fine. All the best to them. Really.

But the thing is, Gil – do we need to make it too easy for them? 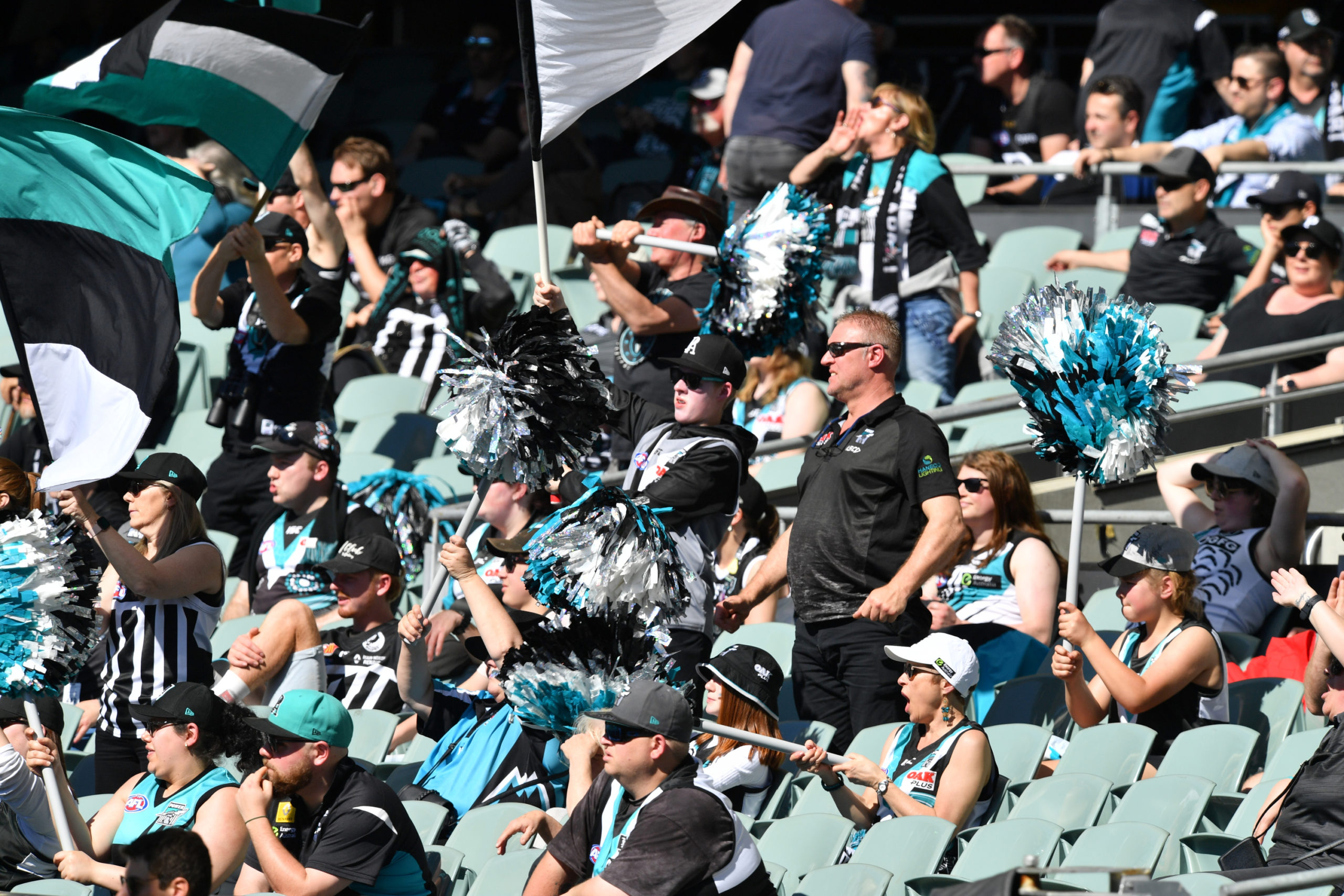 Do we really want to see this on Grand Final day? Photo: David Mariuz / AAP

And I’m not saying this on my behalf – far from it.

Really, I’m writing on behalf of all the poor Port Adelaide supporters who would have to go through the rest of their miserable lives knowing they won a fake premiership that they didn’t really deserve.

And they’d hate that.

They’d obviously completely understand that you gifting them a home Grand Final would put their consequent victory roughly on par with, say, their 2001 Ansett Cup win, or the following year’s Wizard Home Loans Cup triumph.

And that wouldn’t be right. 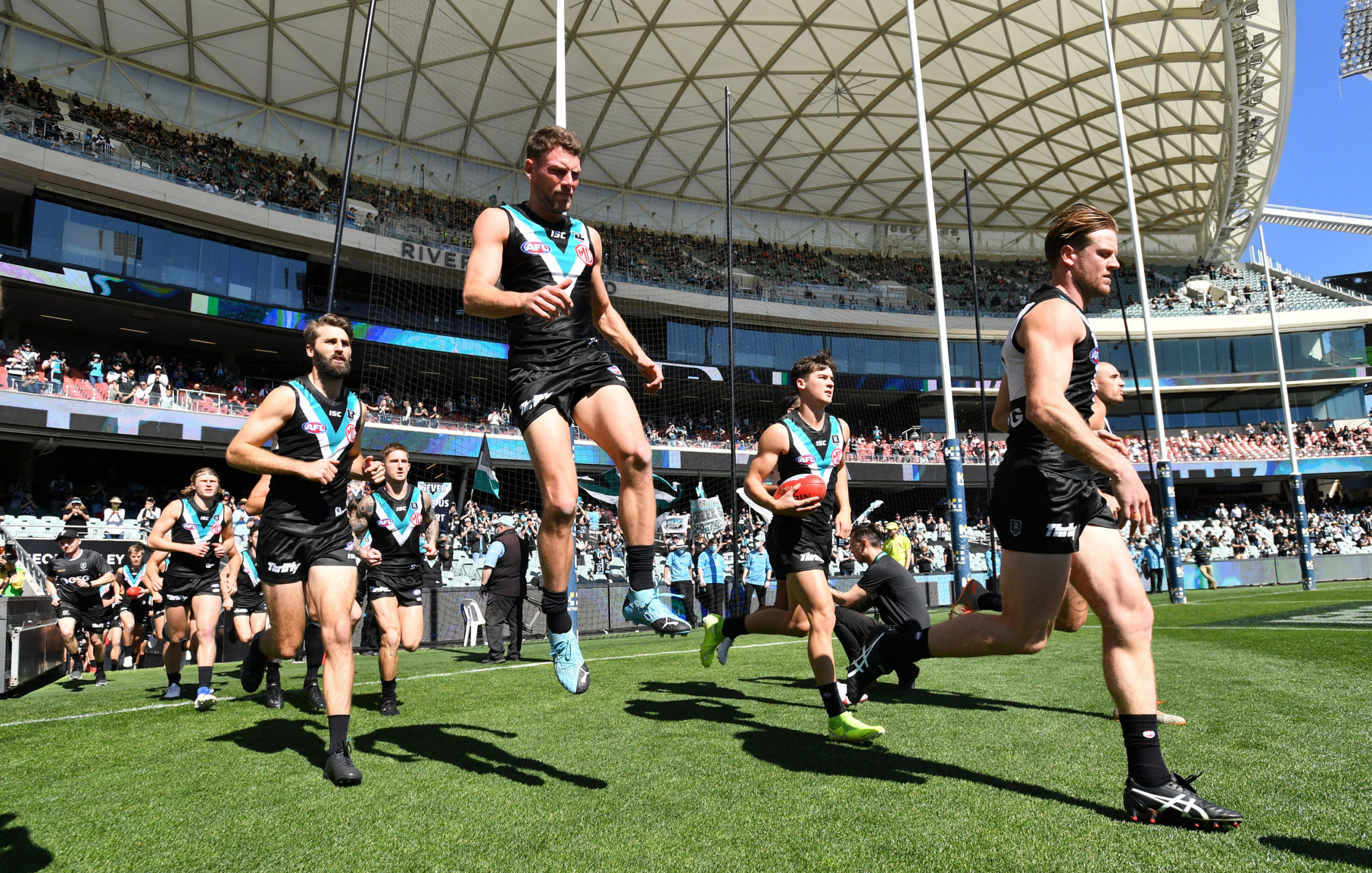 Port would be jumping for joy to host a Grand Final – but would it really eat away inside their cold, cold hearts? Photo: David Mariuz / AAP

Because of course, playing a Grand Final at home does have its advantages.

Five of the last seven deciders, for example, have seen a Victorian side beat a higher-ranked non-Victorian team.

I’m not bitter about this, of course. In no way whatsoever am I at all bitter. Not one bit. Bitter? Ha.

But I would point out that the current debate about which non-MCG stadium will host that big day in September October late 2020 ignores a key component – almost the defining one – of being a non-Victorian AFL follower.

Namely, that the ultimate glory comes from entering enemy territory to snatch their prize.

Bear in mind too, Gil, that while Port have muddled along on their winning way this year, there is another SA team that has been… how should I put this delicately? Embarrassingly shiteful.

And by focussing the nation’s attention on Adelaide, you’ll be subconsciously reminding everyone of the very worst our game has to offer.

Not to mention those several thousand Adelaide Crows supporters who by then will be a good four weeks into ‘Pretending The 2020 AFL Season Never Happened’.

Can’t you be a little more sympathetic to their feelings?

Frankly, it’s a bit tricky to pretend something hasn’t happened when its culmination is happening right on your sodding doorstep! 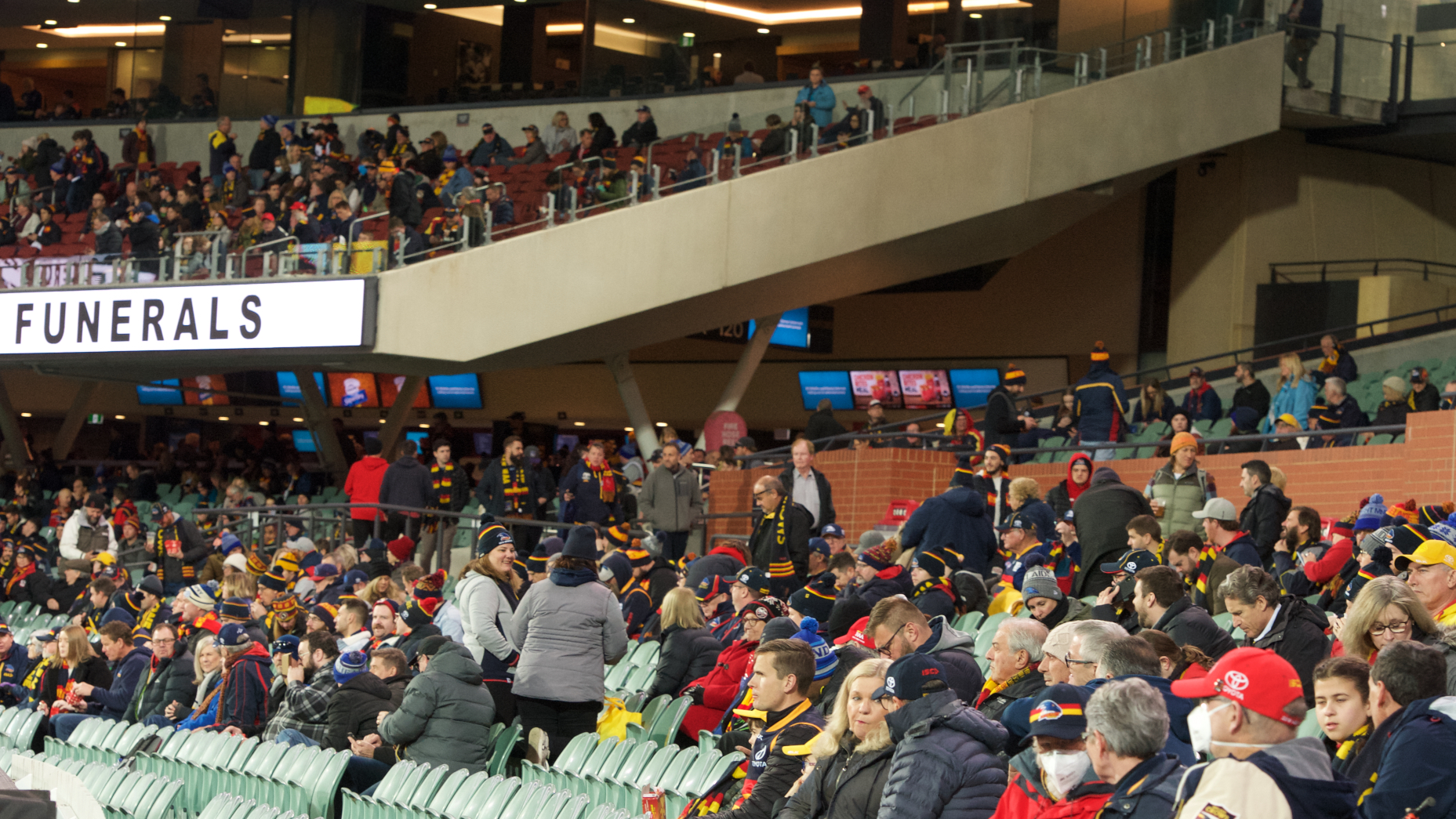 The signage sums up the mood at our home games this year. Photo: Michael Errey / InDaily

So, Gil: you can now appreciate that holding the AFL Grand Final at Adelaide Oval will be deeply annoying to Adelaide supporters and fundamentally unfair to Port fans, who will nonetheless try to put a brave face on things by becoming insufferably smug for the next several years.

Do you really think that’s a good outcome, Gil?

Instead of ‘Going All The Way’ with SA – please, just go away.

Yours in social distance,