Moreover, Port nearly didn’t win – and we nearly, almost didn’t lose. Which is about as good as it gets all round this year.

In fact, the spectator experience of the (arguably) lucky few who attended yesterday’s game could be considered a fair metaphor for the result: I arrived decked in my optimistically-purchased Kathmandu jacket expecting to shiver through several bouts of rain, and instead ended up quite badly sunburnt.

Thus, like the match itself, we expected it to be utterly and unrelentingly depressing only to find it a surprisingly pleasant experience – which still managed to be ultimately quite painful.

Indeed, finding ourselves a mere seven points down at the half sent a small whiff of optimism through the home crowd, which had evidently collectively forgotten that second halves aren’t really our thing this season. 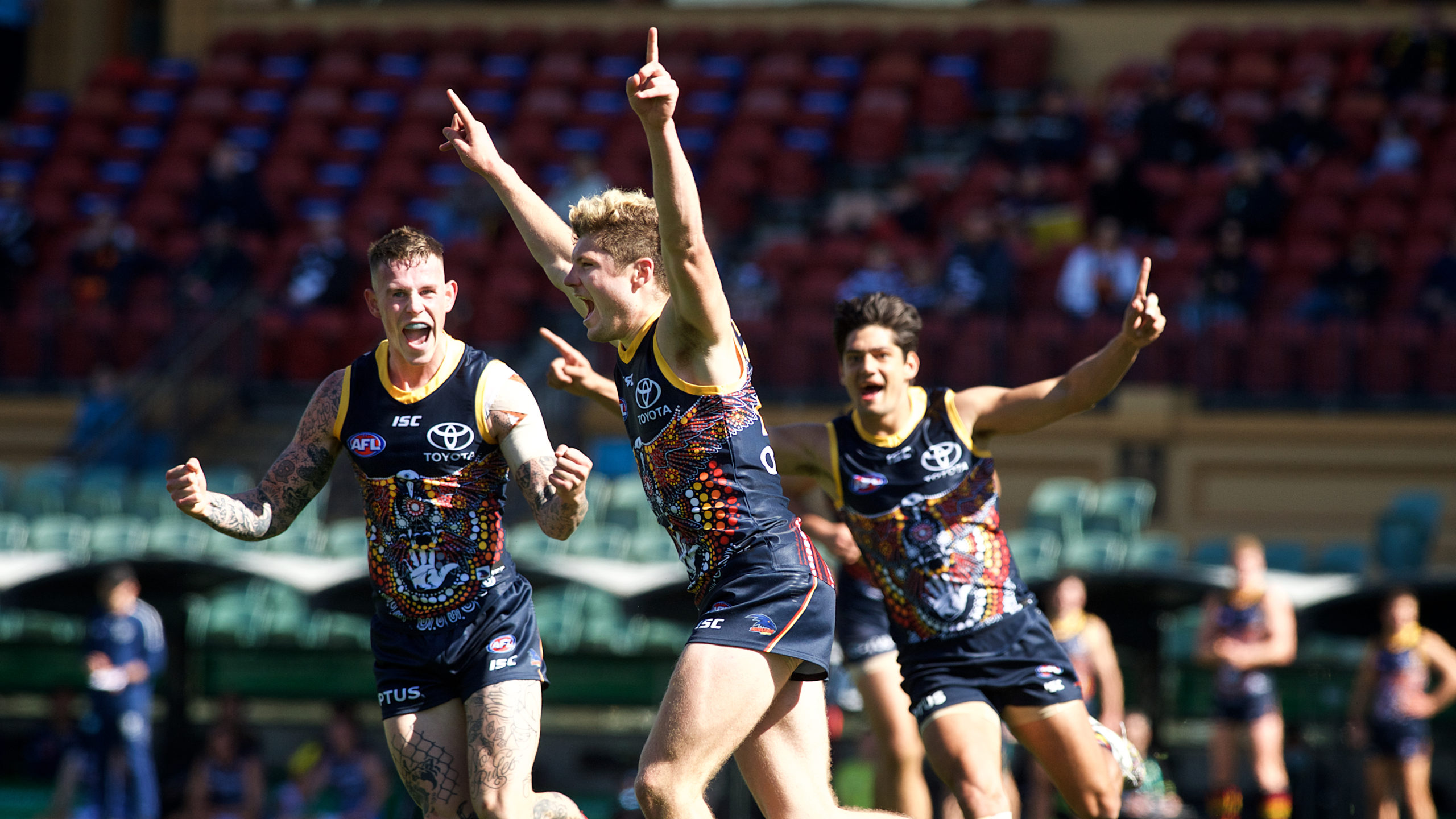 But, if we’re resigned to what in 2020 we are wont to call our ‘New Normal’ (and, frankly, we don’t have much bloody choice, do we?) and are correspondingly happy to enjoy those small moments within games that suggest improvement, or potential, or both – then yesterday’s outing was, sadly, a season highlight.

Some of our five goals (Stengle’s and McAdam’s in particular) were really quite good, emphasising our 2020 focus on quality over quantity.

Where did that six-goal-straight opening term in Round One against Sydney come from anyway?

Given that in seven of the subsequent 12 matches we’ve failed to kick that many majors for the entire game, we may have a case for referring the club to the ACCC for false or misleading advertising.

To demonstrate Adelaide’s commitment to Not Kicking Goals, debutant Jordon ‘Seymour’ Butts was last week given the chance to boot a major in order to play against the Cats.

He shanked the kick – but played anyway.

Which is probably symbolic of our rigorous selection policy for 2020:

Fortunately, he’s not likely to be called upon to kick too many goals playing deep in defence, and moreover had a few nice moments in a game in which we looked better than we’ve come to expect, and for longer than we’re accustomed.

It was also a week for reflection: not merely on the Indigenous greats of the game ahead of Sir Doug Nicholls Round, but – for a change – on the significant positive contributions of Tex Walker ahead of his 200th game, as opposed to the general sledging which has become such a popular pastime in recent years.

I’m not superstitious, but I’ve always suspected it was tempting fate to be captained by a guy with the number 13 emblazoned on his back, and so it transpired on his milestone game – our 13th loss for the season in the 13th round.

And while we hoped for more (for him, moreso than us) Tex’s contribution on the day was modest, particularly in contrast with Cats spearhead Tom Hawkins who, at 32, is in as good a form as ever he’s been.

But then, that’s not really the point. Not entirely anyway.

The club’s present ain’t a great place, but yesterday was more about its past – and future.

He may yet be bundled out the door at season’s end, but Tex has been loyal – and, as we were also reminded yesterday, that’s not something we get to say about a lot of our club stalwarts. 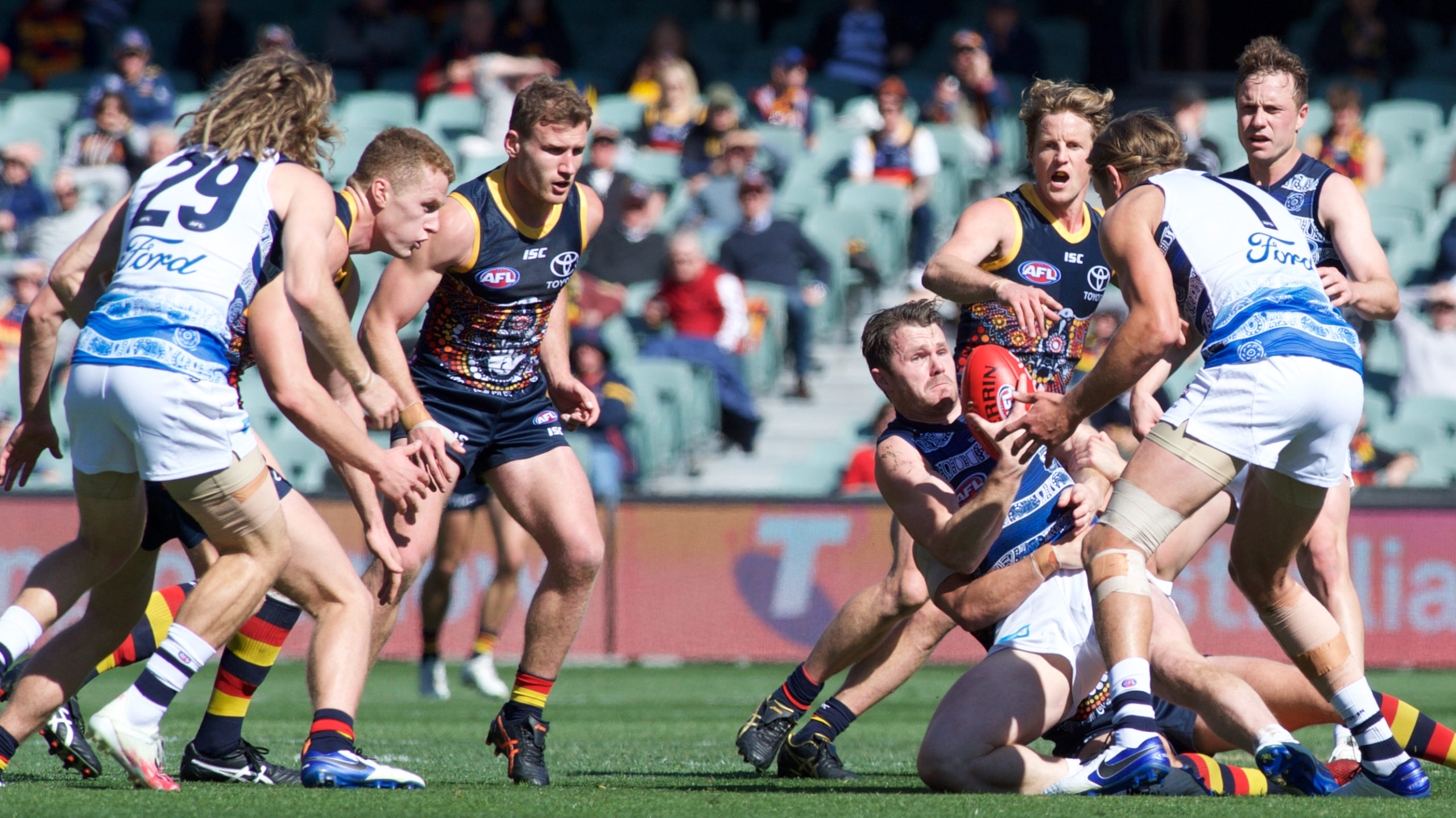 And it’s a sense of commitment we can only hope he’s instilling in the younger generation of Crows players.

Guys like Billy Frampton, who evidently refused to join with his housemates’ COVID-protocol-flouting shenanigans a few weeks back, even though his only punishment would have been not getting selected in the Crows’ side, which he’s been doing since Round 6 in any case.

And besides, given our recent form you could argue not getting selected might be considered more reward than punishment anyway.

Still, I’m not sure what it says about Port Adelaide’s bid for the meaningless 2020 premiership that its players are willing to risk lengthy suspensions in order to socialise at home, as Frampton’s housemates and confessed Covidiots Peter Ladhams and Dan Houston did recently, sparking yet another AFL inquiry and some fevered midweek hand-wringing.

Although the eventual sanction was probably neither here nor there, given some pundits had already questioned Port’s persistence with two ruckmen, while Houston was coming off one of his poorer games against the Cats. Moreover, with the Power playing three of the four worst-placed sides during the course of the suspensions (the fourth, of course, being us), the ‘punishment’ proved fairly negligible.

Still, the lowly-ish Hawks did give Port a scare on the weekend, drawing level at three-quarter-time and within a goal with minutes to play, before Scott Lycett helpfully emphasised the value of playing with a lone ruckman by offering a goalward Butters the ball as if ‘twas a tray of hors d’oeuvres, with the subsequent goal sinking Hawks’ hearts around the nation.

I know people say Hawthorn supporters are too accustomed to success, but I was one for about 20 minutes on Saturday and, frankly, it didn’t do much for me. 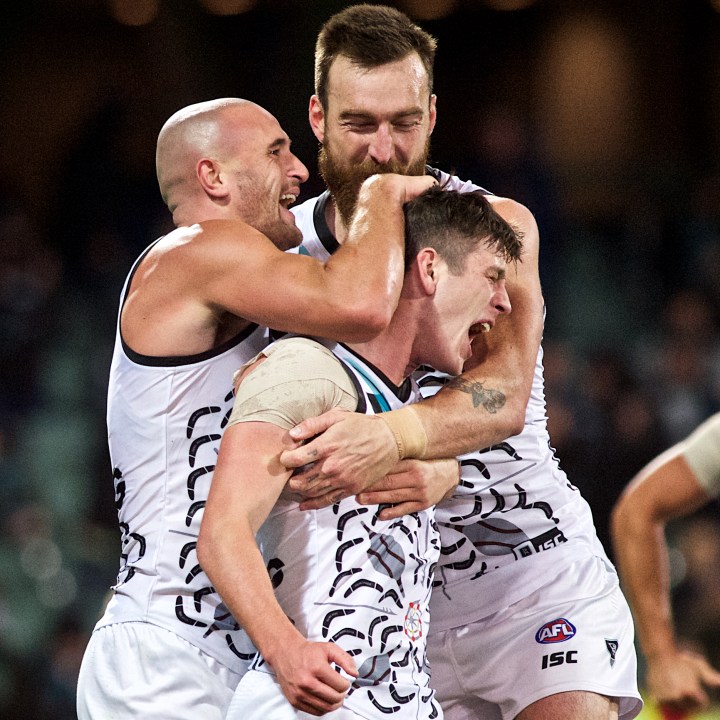 Butters gets buttered up by his teammates after kicking the sealer. Photo: Michael Errey / InDaily

Of course, the problems of one frustrated Crows supporter don’t amount to a hill of beans in this crazy world, where spiralling health crises and ongoing pandemic restrictions at least help us put things into some perspective – and even find some rays of positivity.

For example, the COVID-curtailed 10,000-person attendance cap at Adelaide Oval means you can quite feasibly manage to get to the bathroom, the bar and back to your seat – all within the quarter time break.

Not to mention the one-seat-between-patrons rule makes attending games in 2020 feel like the ‘Business Class’ of football fandom (apart from our team never winning, of course). 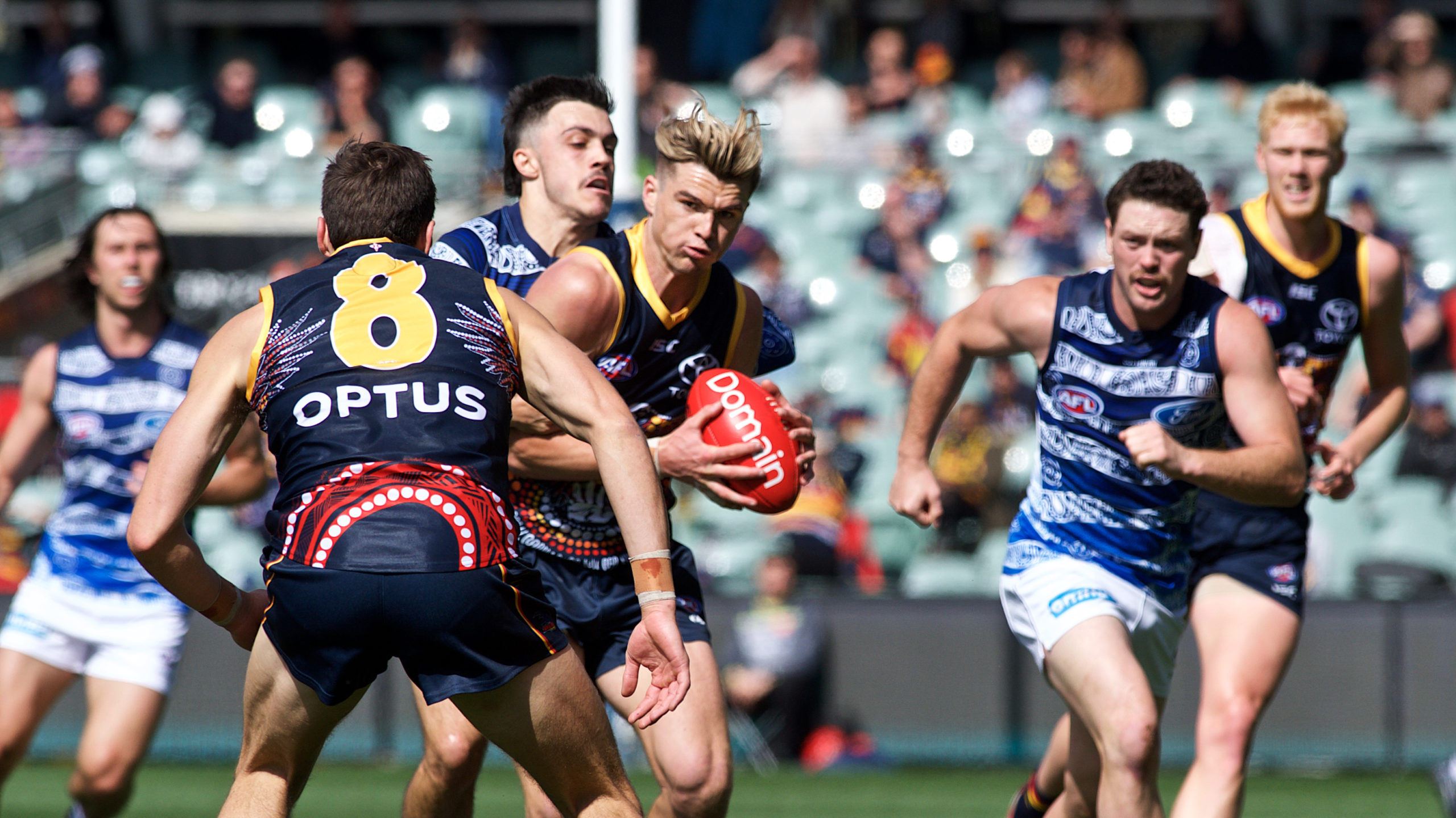 It was one of our best non-wins for the season. Photo: Michael Errey / InDaily

Which is good, given flying anywhere – let alone flying Business Class – remains for most of us a distant memory, and if a mooted COVID crackdown in Queensland escalates, it could have a quite dramatic effect that would resonate for many years to come.

Notably, gifting Port a flag thanks to a home Grand Final.

And all the while, we’re persistently labelled as the worst side since Fitzroy in 1964, which was the last time a side went winless trough a season.

Of course, we’re comparing apples with oranges there, given this season has just 17 rounds, five fewer than we’d normally play.

Freo, for instance, won just two games in 2001 – but their first victory that year didn’t come till Round 18 (although the less said about their second the better).

So, as ever, we must keep some perspective.

For a start, the shorter quarters in this COVID-curtailed season from hell have helped ensure that, bad as we are, we’ve avoided a genuine three-figure thrashing that sides of our ilk generally receive routinely.

And moreover, we’ll retain our record of not having lost twice to Port Adelaide in a single season since 2013.

And, of course, at our core, we know there’s some sort of method to all this madness – that there was a calculated decision to take about a million steps back so that we might one day move forward again.

And outings like yesterday give us the one thing we need to believe that just might happen.