Ok, so we’ve arrived at that point of the season where it’s probably important to mention something, just so that we’re all on the same page.

Specifically, and just for the record: that this season actually doesn’t really matter at all, and whoever wins the flag will always secretly understand that, deep down in their wretched hearts.

And by “doesn’t really matter”, I don’t mean in that, ‘it’s only a game, stop taking it all so seriously’ sort of way that people who don’t particularly like sport sometimes like to argue. (My wife, for instance.)

I mean in the sense that you’ll spend the rest of your life being assured it was a meaningless premiership that genuinely doesn’t count. A bit like trying to include a bunch of SANFL flags in your AFL total.

So, if you were a supporter of – say, just by way of example – Port Adelaide, you’re really better off if your team doesn’t win a flag at all, because it will be something of a millstone to have won it in a year of pandemic postponements and random hubs, a season with so few rounds, and such short quarters, and near-non-existent crowds (although they’d be used to that last one, of course). And actually, I sort of feel a bit sorry for them all that they might accidentally win one in such a scenario.

In fact, you’d almost go so far as to say you’d be embarrassed to win the 2020 premiership.

I mean, I wouldn’t personally go that far: I think it’d be absolutely ok to win this year’s flag. Not bad at all, on balance.

A bit of lark, really. Cause for mild celebration, like the time they won the Ansett Cup back in 2001 (except without Mark Williams giving one of his famously bad post-Grand Final speeches that manage to piss off someone significant, which in that case was half the crowd who’d bothered to show up. Fortunately within three years he managed to hone his insults more finely, merely nationally humiliating the club’s biggest individual sponsor instead).

Which is apt for 2020, a year in which our way of life as we know it on planet earth has literally ended. A year of global health and economic crises in which our most cherished pastimes have been curtailed, whether they be propping up the Garry McIntosh Bar after a heartbreaking Crows loss or merely the humble handshake hello.

Though it does tend to make this already tedious year feel even longer. Even though it doesn’t count in any way whatsoever, watching the footy at least promised to be a pleasant enough diversion from the horrors of everyday life.

But instead, in 2020, it simply underlines them.

This weekend, for instance, gave us the delightful opportunity to watch the Power crush the recent Premiers in their shared Queensland hub.

That wasn’t exactly proving to be my idea of a Great Time, so I eventually opted instead to get on with a few odd jobs, and listen to the rest of the game via ABC Grandstand – which, in keeping with the “2020 is Hell” theme featured Don Pyke doing special comments, most of which revolved around “field position”.

It was just that sort of afternoon.

For what we’re really witnessing here is more like an extended 2021 pre-season. Possibly even 2022.

And look, I’m not being churlish here: I’m the first to admit my team’s not travelling as well as it might.

This is by no means a case of me trying to downplay how bad the Crows have been, or somehow try to cast aspersions on an entire season of AFL merely because the most annoying football club in the world happens to be undefeated on top of the ladder. By no means.

I would remind you of the words of William Butler Yeats, whose poem The Second Coming was first published – and this can’t not be portentous – exactly 100 years ago, and appeared to warn all too prophetically of the Satanic Apocalypse that is Season 2020.

“Surely the Second Coming is at hand,” Yeats wrote, never realising that a century hence some God-awful AFL club would be on the march towards its long-feared follow-up to its maiden flag (if you don’t count all the SANFL ones before that. Which you certainly shouldn’t.)

Yet the clarity of his vision is unnerving, in a single stanza foreseeing entirely Adelaide’s collapse to a national laughing stock while Port take all before them: “The best lack all conviction, while the worst are full of passionate intensity.” 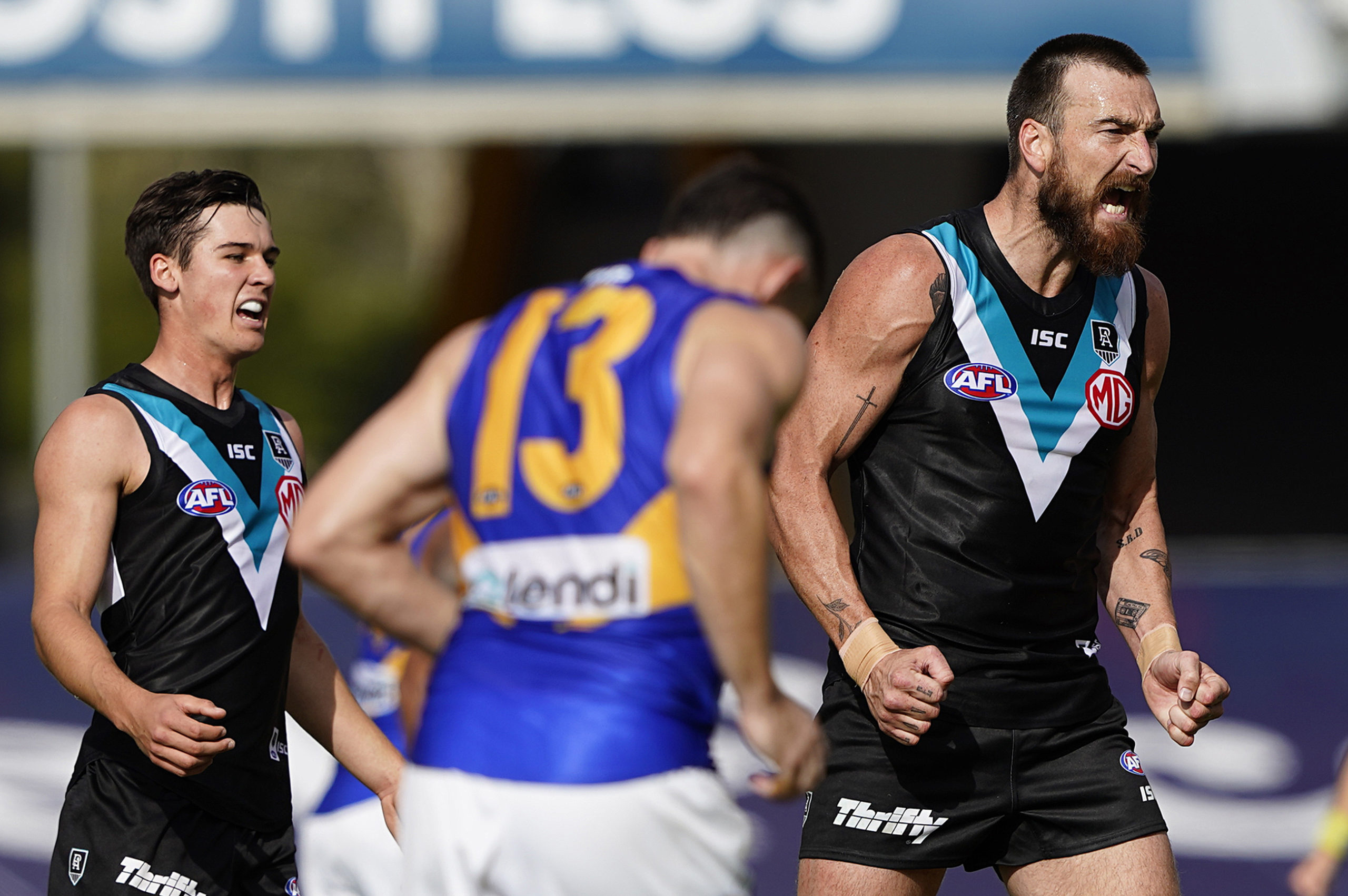 Yeats was really on to something. Photo: Dave Hunt / AAP

“Mere anarchy is loosed upon the world.”

Hell, ol’ W.B. even succinctly summed up our drubbing by Brisbane yesterday, when he told of “a shape with Lion body and the head of a man” slouching towards Bethlehem (ie, finals) “while all about it reel shadows of the indignant desert birds” (ie, us).

So anyway, I don’t want to alarm anybody. But it’s entirely possible a 2020 COVID premiership to Port Adelaide was precisely the calamitous armageddon Yeats was warning us about.

Which is why we at least get the consolation that – according to Australia’s sports media – whoever does win the 2020 flag might find the outcome a little… Gauling. 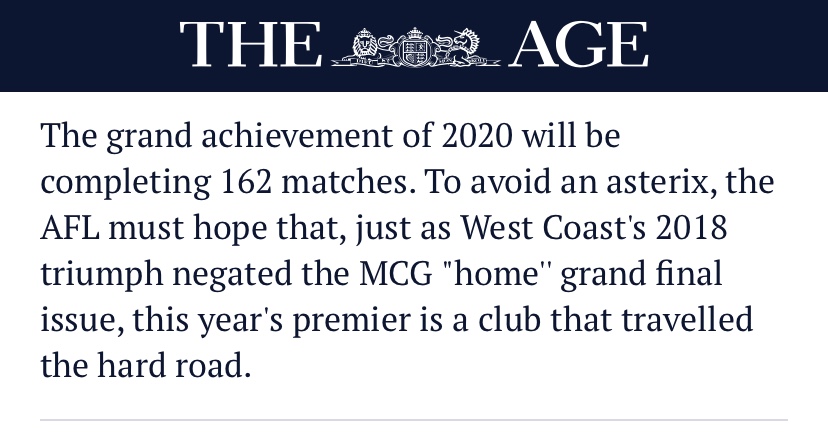 Now, I’m not entirely sure what an “Asterix premiership” is: does it imply the flag will go to Essendon? Who knows. They certainly seem to have had the same penchant for performance-enhancing supplements.

But what I do know is that there is clearly a significant “obelix” or three in our way towards winning this year’s flag (or indeed, any year’s until around 2035). Namely: form, talent, hunger, confidence and culture, to list a mere few.

Still, not to worry.

For if it matters not one whit whether or not Port or anyone else wins the flag, the corollary is that our presumptive wooden spoon is likewise neither here nor there.

Apart from snaring the number one draft pick, of course, of whom we know nothing except that it will definitely not be Matt Rowell. Which is unfortunate.

Indeed, it’s entirely possible we’ll wind up last and still not snare the season’s top-picked talent, who is every chance to go to the Western Bulldogs as an Academy prospect.

But it’s a good lesson, to be careful what you wish for.

I’ve been writing these missives since 2014 and, if I’m honest, I’ve never wanted for things to complain about.

Even when we made finals – and occasionally even won them – for three years straight, I had cause for complaint.

Not winning flags, being the general one.

But also, things that now seem like comparatively minor grumbles, like losing games we should have won, directly after winning games we had no right to win.

I’d complain about our infuriating inconsistency, and our penchant for always coming close but never winning the ultimate prize.

And at last, we’ve delivered: the club has answered the call. For we are no longer inconsistent and I won’t have to worry about narrowly missing out on a flag for years to come.

Still, the Crows played one decent quarter yesterday – their first since that six-goal-straight opening stanza against Sydney in Round One – and that is one more decent quarter than we’ve played in the three months since.

Moreover, if we were the type to go in for positives (we’re not, but bear with me here), we also saw a fleeting vein of form from a young goalkicker who will no doubt play a key role in our forward line for many years to come. 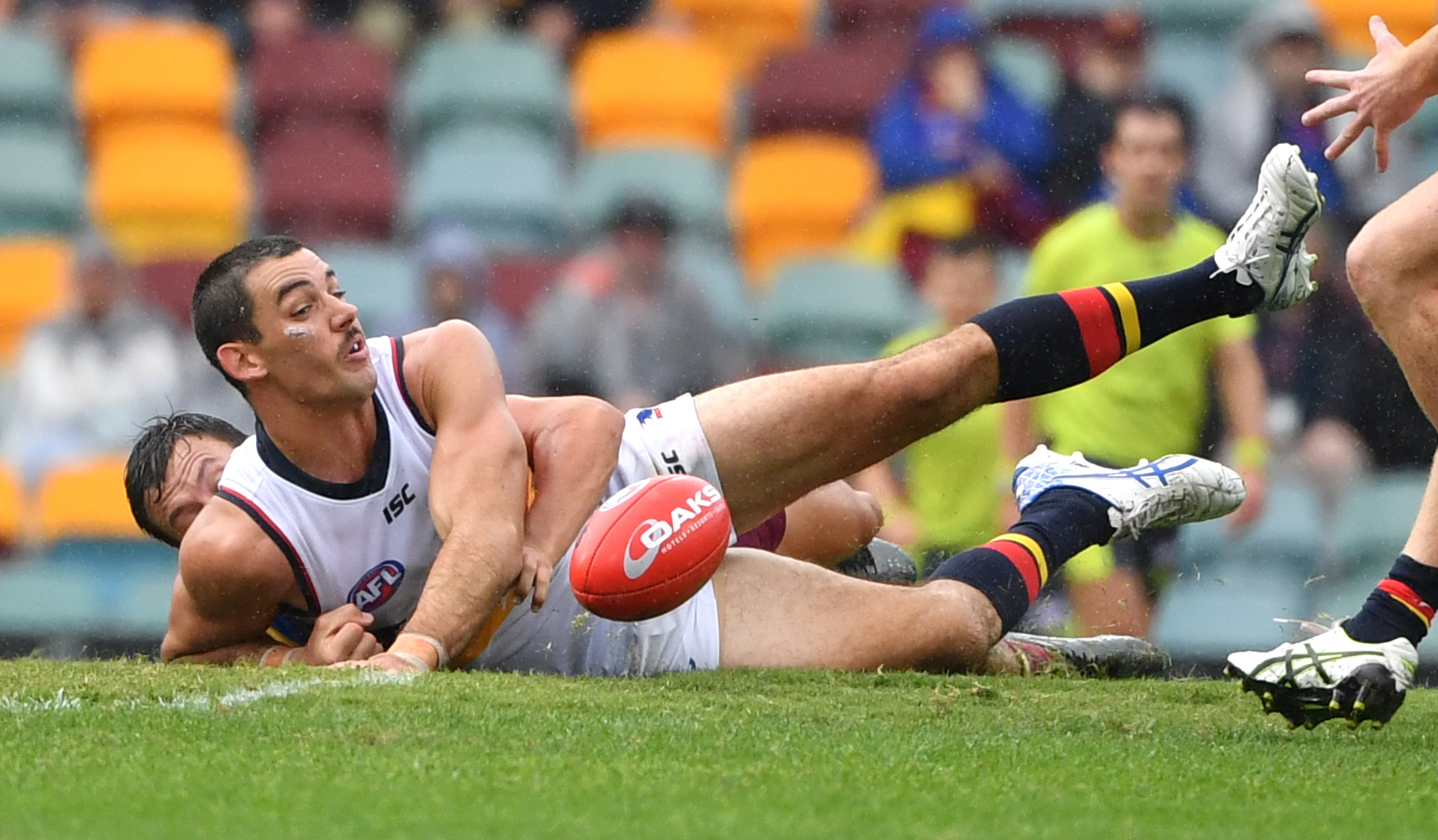 So, in fact, it doesn’t matter that we were soundly thrashed by Brisbane (who not so very long ago won the wooden spoon themselves, in a year in which we finished on top of the ladder), with 50 fewer disposals, half the number of inside 50s and nine fewer clearances. Indeed, the only significant stat we won was turnovers, with the 37-point margin generously flattering us after we kicked 11 scoring shots to the Lions’ 33!

And it matters not that our one recent draftee with a knack for the highlights reel was yesterday playing for the opposition. 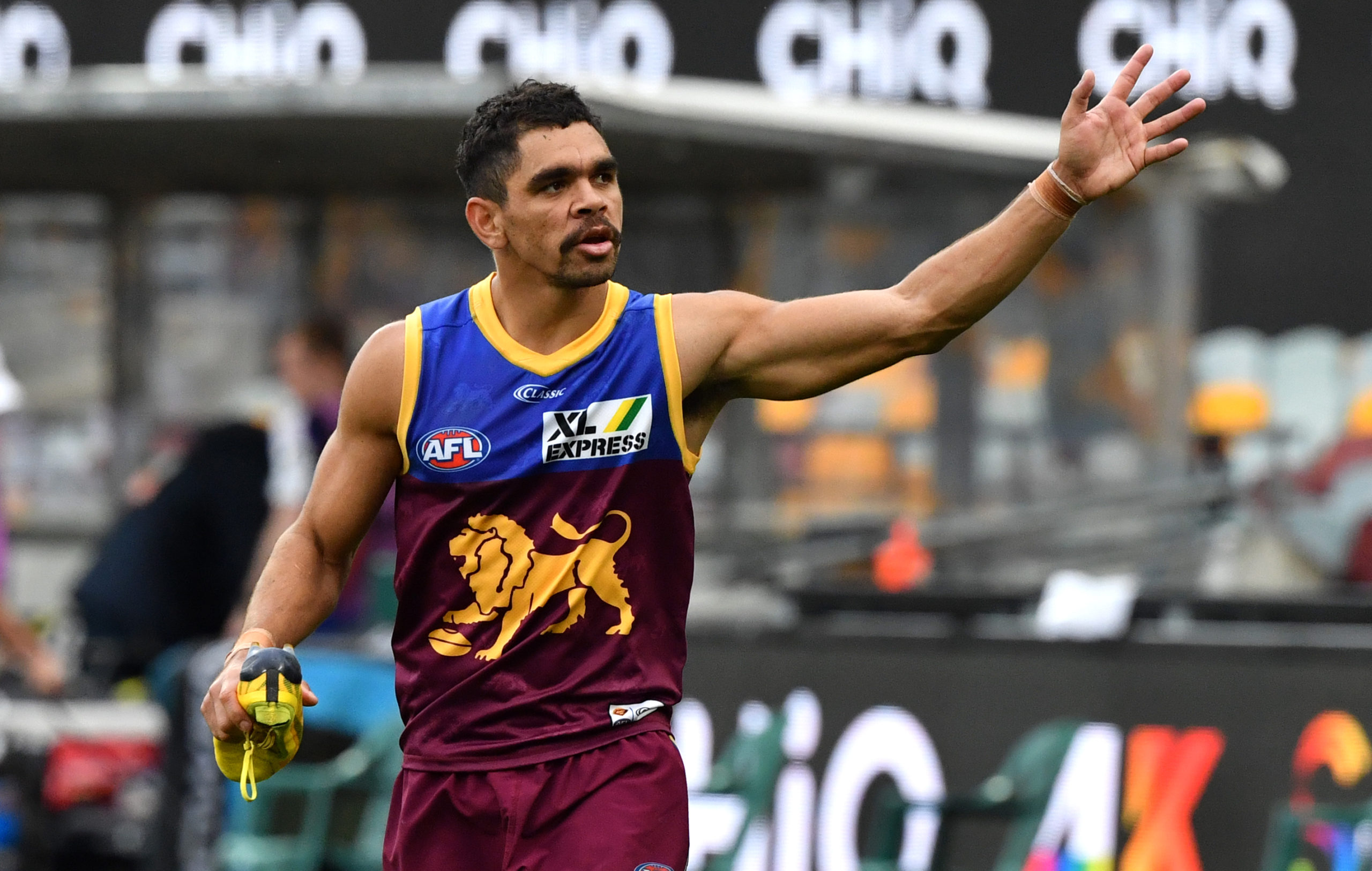 No, none of it matters.

At least, that’s what we have to keep telling ourselves.

Because that’s about as much consolation as we’re gonna get any time soon.

And moreover because if it did matter… well, that’s a scenario that’s simply too grim to contemplate.