And so all those heady dreams that seemed almost tangible at some point in that pre-season wonderland (premiership, number one draft pick) have once again collapsed into that mire of disappointment in which we have wallowed for more than two decades now.

But then, we shouldn’t be altogether surprised – merely wearily resigned. We should, after all, be well accustomed to our club’s unfailing propensity to take our lofty hopes of semi-competence and crush them under an avalanche of ineptitude, knowing we will merely front up again to endure yet another wasted season with our collective hearts just that little more bruised than before.

Having missed the past three home games for a variety of reasons (40th birthday, theatre booking, couldn’t be arsed), I this week ill-advisedly spurned two social events which in hindsight would have been immeasurably more enjoyable, to instead trudge that familiar journey through the eastern entrance of Adelaide Oval, and on (via the Garry McIntosh Bar) to our seats. A final farewell to our season, but with the faint allure of a perfunctory finals berth if we could nudge past the recently-out-of-form Magpies. 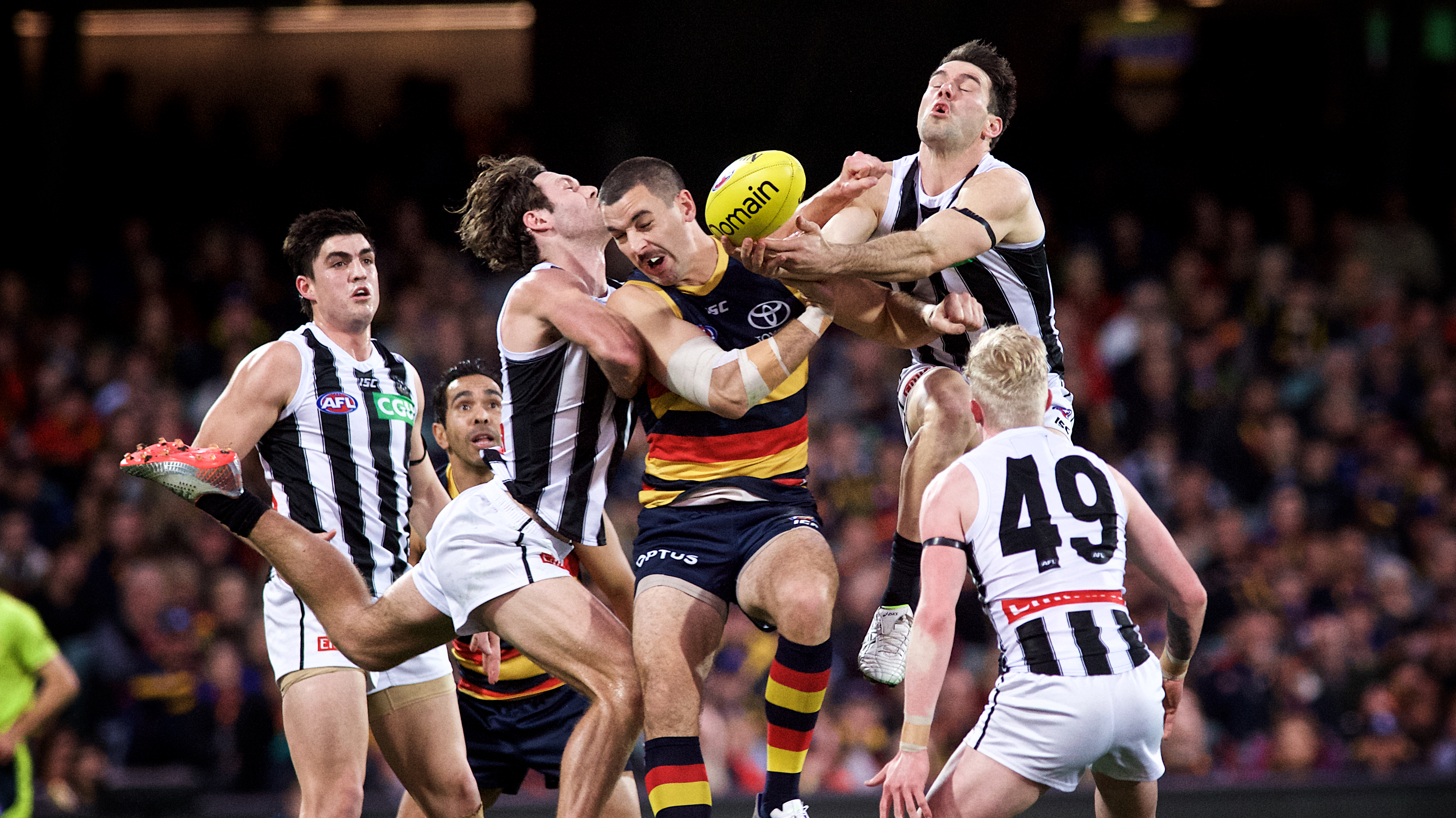 And sure enough, we were treated to a high-quality contest of guts and determination, with a nail-biting finale that showcased the best of AFL football between two sides set to go deep into September.

At least for the few minutes that most of us gave up on the dire yawnfest in front of us to watch the end of the Lions-Cats game on our smartphones instead.

For, as ever this year, it quickly became apparent that the ‘best-case’ Adelaide scenario was not going to eventuate.

The Crows, who evidently long ago decided that goals were overrated in the modern game, took the novel approach of kicking their first six-pointer in instalments, amassing half a dozen behinds before finally breaking through with their first major halfway through the second term, after a strong mark by that noted power forward… um, Richard Douglas.

After which, in true Adelaide fashion, we quickly conceded the next goal to Collingwood. 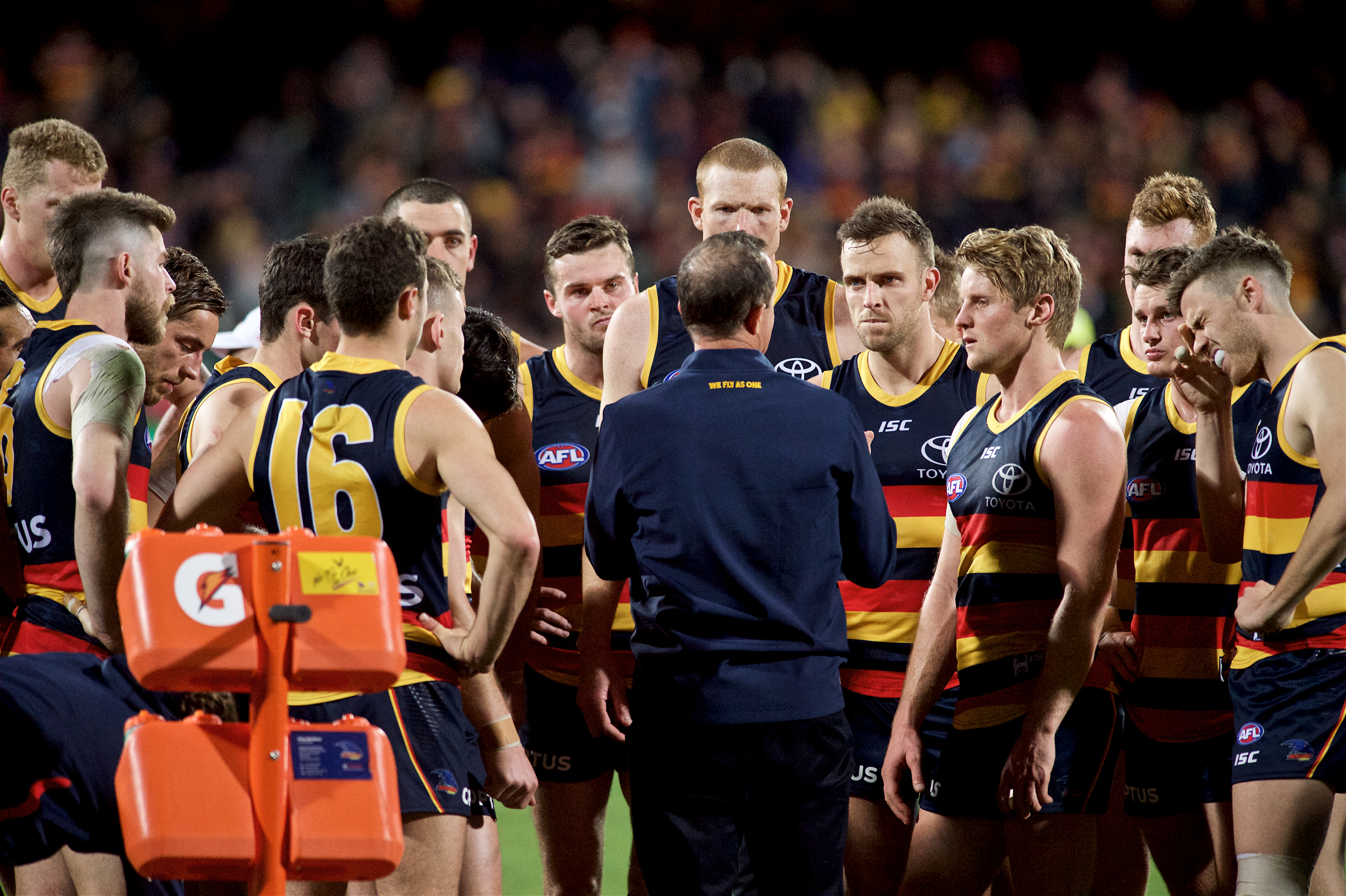 “Now fellas, I have a few notes about that third quarter…” Photo: Michael Errey / InDaily

If the first half was dire, the second was almost comical, as the Crows players stopped to admire their Pies opponents running riot.

Our third goal, which lamely broke a run of six straight from Collingwood after the long break, got a better reception than it deserved, while Eddie’s much-hyped 600th was surely the most anticlimactic of his career.

You know it’s been a bad day when the highlight of your second half is ironically cheering the Thomas Farms Official Attendance announcement on the big screen.

About the only actual positive was Darcy Fogarty, who couldn’t get a game until two weeks ago but who for the second match in a row kicked about half of Adelaide’s total score (which, admittedly, is not as impressive as it sounds when your total score is only six goals).

Even the usually stoic Don Pyke had the air of a man cowed by the reality of the car-crash he had overseen, a home-ground capitulation no-one saw coming. 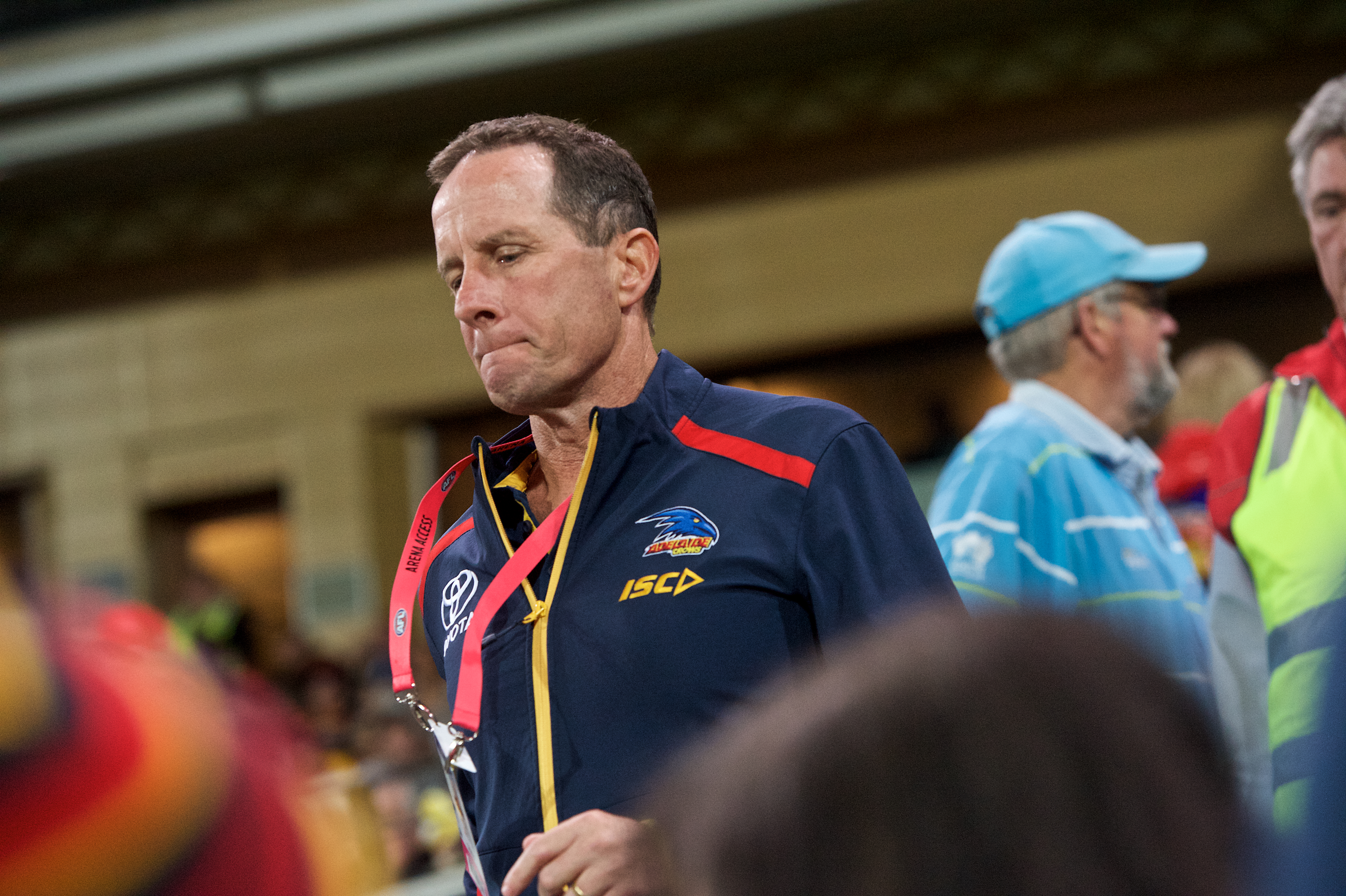 I mean, who would have thought that after a week dominated by open speculation about a wide-ranging list cull at season’s end – speculation no-one at the club appeared to hose down – that the players would come out and perform like a bunch of guys who didn’t want to be there?

But there was the rub – and, for me, the worst part of the week wasn’t even the on-field performance, but the seemingly-universal acknowledgement that this might be the new normal.

In his weekly News Corp column last week, for instance, Adelaide’s only premiership captain Mark Bickley – a one-time interim senior coach – declared the club would be “testing the [trade] value of players like Alex Keath and Hugh Greenwood”, both of whom he noted were “in their late 20s and unlikely to be a part of the Crows next Premiership side”.

Which is about the most depressing thing I’ve read all year, and not just because of the missing apostrophe.

If two 27-year-olds aren’t part of our next premiership side, that means we don’t expect to win a flag for at least another three years. Probably more.

(Realistically, of course, it’s highly likely our next crop of premiership players is actually yet to be born…)

But even in the most optimistic planning scenario now, I’ll be in my mid-to-late 40s before I can so much as think about doing the drive of shame back across the Victorian border again after another MCG humiliation on the last Saturday in September.

And so, again, we steel ourself for the long march to the next inevitable disappointment.

And right now, even the thought of watching those old late-’90s triumphs again has lost its nostalgic appeal. It’s like looking back on old high school photos: it used to be fun to reminisce, but now it merely reminds you how long ago it all was, and how tired and slow you’ve become. 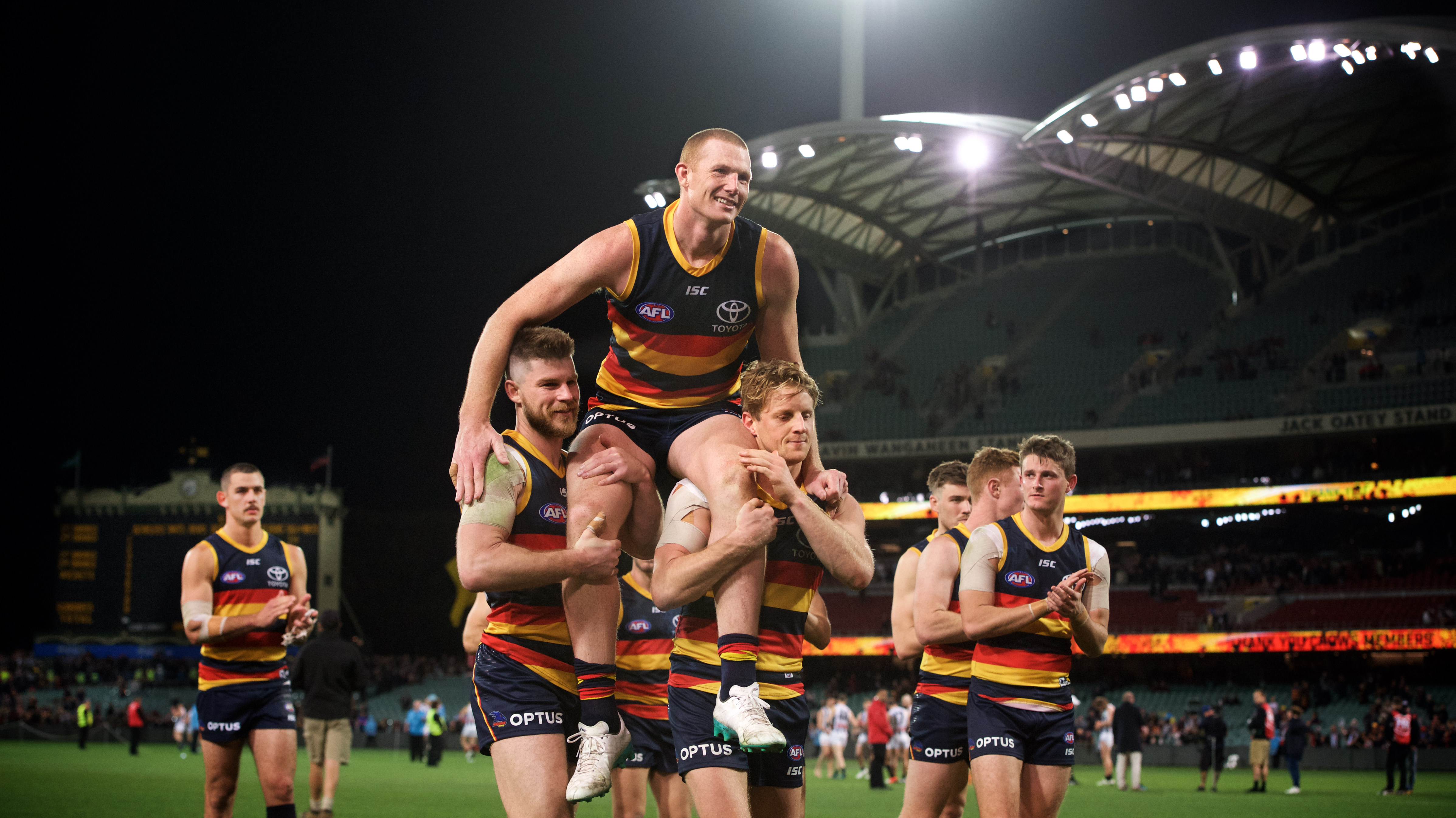 The Crows must now ponder who’s going to carry the team in the years ahead. Photo: Michael Errey / InDaily

The reality of this hit home during the final term on Saturday, when a bloke sitting a few rows in front of me, probably in his early-to-mid 60s, kept imploring the players in abject desperation: “Come on boys, lift!”

And all I could feel was a deep and inexpressible sadness, as it became clear that this guy probably won’t live to see his team hold another premiership cup aloft.

But then, I’m starting to suspect that I won’t either.

In fact, at the rate we’re going my five-year-old daughter may get to her dotage without seeing the Crows win another flag (although fortunately she doesn’t seem to care too much, unless the premiership cup happens to be full of Lion King ooshies).

But because this season has not been merely abject but also downright weird, there was – inevitably – another twist.

With the Crows having ceded what once appeared a gilt-edged opportunity to play finals, Port had only to overcome North to all-but lock in a finals berth with just a home-ground game against struggling Freo to come.

But something magical happened.

The Kangas, having kicked just a single goal to post the lowest score in their history the previous week, instead piled on 22 to absolutely belt the Power, who were evidently gamely trying to outdo us in the “which club hates their coach more” stakes. 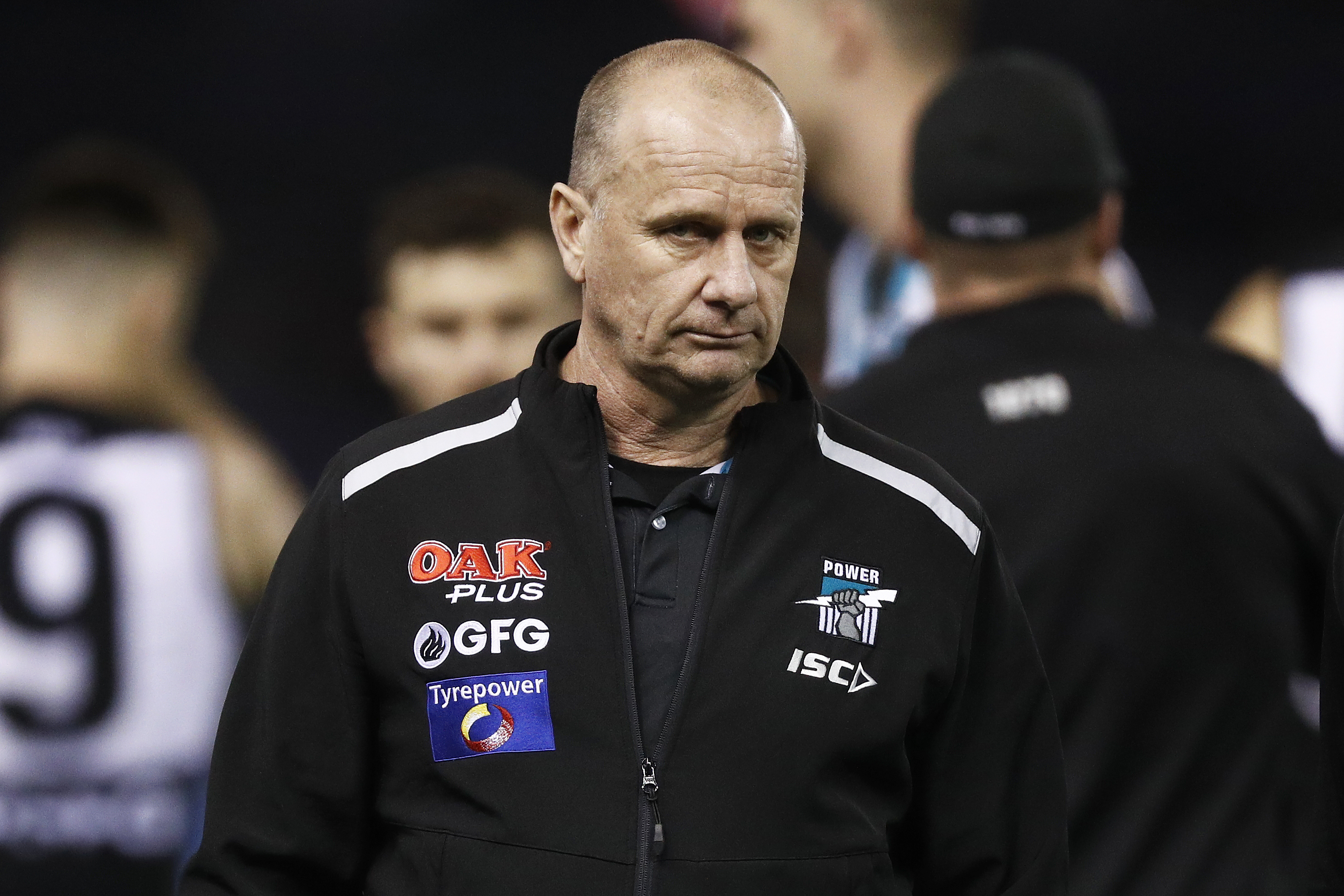 It turned out to be this guy by a nose. Photo: Daniel Pockett / AAP

It was like some bizarre strategic suicide pact, the football equivalent of Mutual Assured Destruction.

Or, at least, it was certainly Mad.

And the Crows, having started Saturday outside the eight, ended the night actually moving up the ladder.

Which was frankly a bit embarrassing. And also pretty funny.

But also, ultimately, fairly meaningless, although I’ll be forever grateful to North for making the bus-ride-of-shame home slightly more bearable.

For just when we were thinking that maybe – just maybe – we could ‘Steven Bradbury’ our way into eighth spot, yesterday brought (as it was always destined to bring) big wins for the Hawks and the Bulldogs, the latter of whom we play next week in what will doubtless become known in Crows folklore as ‘the Ballarat Balls-up”.

Still, at least it meant Port, having started the weekend with a tenuous hold on eighth spot, tumbled three rungs, and virtually out of contention.

But the truth is, we’re not inherently lucky enough to be football’s Steven Bradbury. If anything, we’re just one of those guys sprawled comically across the final bend behind him as he sails into gold. Not Ohno – the guy everyone remembers – but one of those anonymous human props strewn across the ice, lamely wishing they could have their time again and just do everything completely differently.

As a final insulting footnote to a season that began with sweet-nothings about how much fun it all was, we’re now a mere six spots ahead of Carlton, who could yet climb further up the ladder before our now-infamous pick-swap comes to fruition.

And to rub salt in the wounds, we get to read reports the Crows are looking to offload the pick anyway, in return for a selection of lower draft picks.

So… kinda like they had before they traded them in for the Blues’ first-rounder.

I can’t help but imagine the Crows’ brains-trust heading along to Trade Week, and some rival club talent scout sidling up and persuading us to hand over pick three in exchange for a handful of Magic Beans.

My suggestion: we offer it to Carlton in exchange for pick 9 and Liam Stocker, just to see how they react.

So, after everything, what’s next? Pyke has already half-flagged a football department clean-out, and the consensus appears to be that the dreaded ‘R-word’ – Rebuilding – is back in vogue at West Lakes.

Best I can tell, this is at least the fourth Rebuild we’ve had since the flag double – so we must be getting pretty good at it by now.

But now isn’t the time to play the Blame Game, or to single anyone out for the high jump. It’s time for a sober, diplomatic response to a disappointing season, among the darkest in our impressive collection of bleak outings.

So my advice is: to be on the safe side, we should probably just sack everyone.

But first we gear up for one final outing – and I think we should just decide right now (given we’re clearly gonna get thumped anyway) that our plan is to lose to the Dogs on Sunday and take Port down with us. 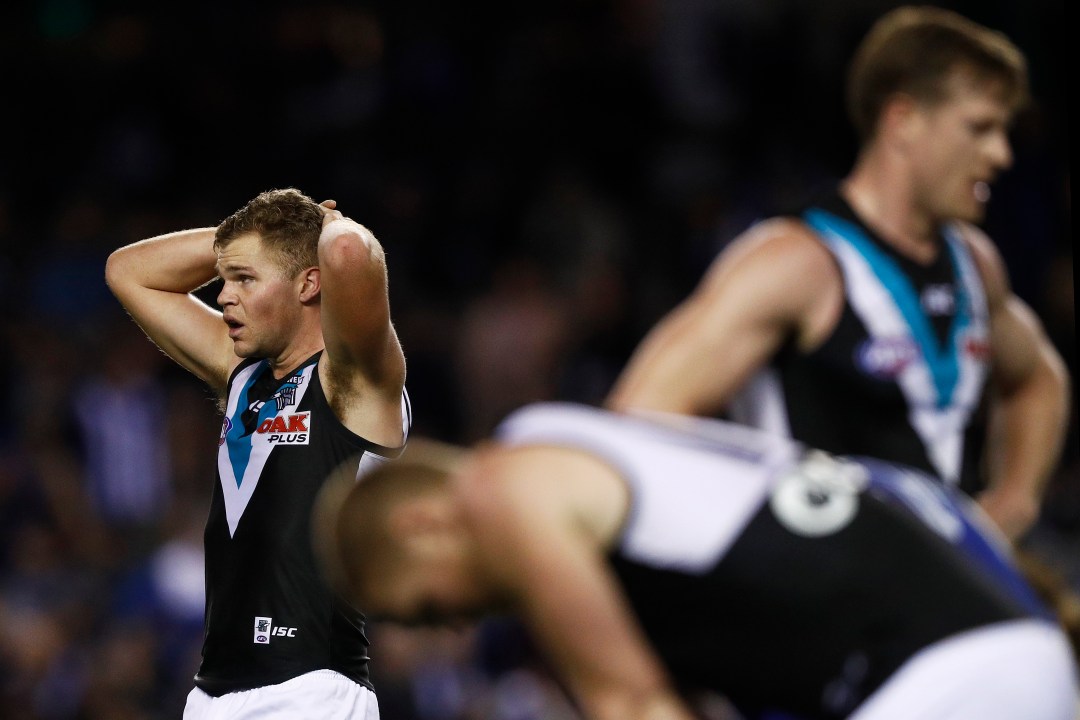 Enough talk of meaningless finals berths and mathematical chances; let’s embrace our destiny and go out in the way this festering feculent season deserves: with a spectacular flop.

As the old saying goes, it’s time to go out and win this one for The Gipper.

Though Port, in any case, are clearly quite capable of throwing their own season perfectly well without our help.

And to be honest, most of their supporters would probably be grateful to be put out of our shared misery, this death embrace of mediocrity and frustration.

For like them, at this point I just want this terrible, horrible, miserable, no-fun-at-all year finished, over and done with.

And judging by the performances of our respective teams this past weekend, the players do too.

Touch of the Fumbles is InDaily’s shamelessly biased weekly football column, published on Mondays during the AFL season. Which, presumably, ends next week as far as we’re concerned.