(Post-match. A few reporters sit in front of an empty desk. Don Pyke enters, accompanied by the club’s media liaison. He wanders over absently, stops and peers under the desk.)

(Pyke stoops and inspects underneath his chair. He then turns and looks around the room.)

PYKE: (vaguely) Ah… nothing. I’m just looking for my players. I just went to give them a bit of a debrief but I can’t find them anywhere.

PYKE: No, I haven’t lost them. I just don’t know where they are.

PYKE: No, definitely not. I’ve just… mislaid them. Anyway, let’s get on. 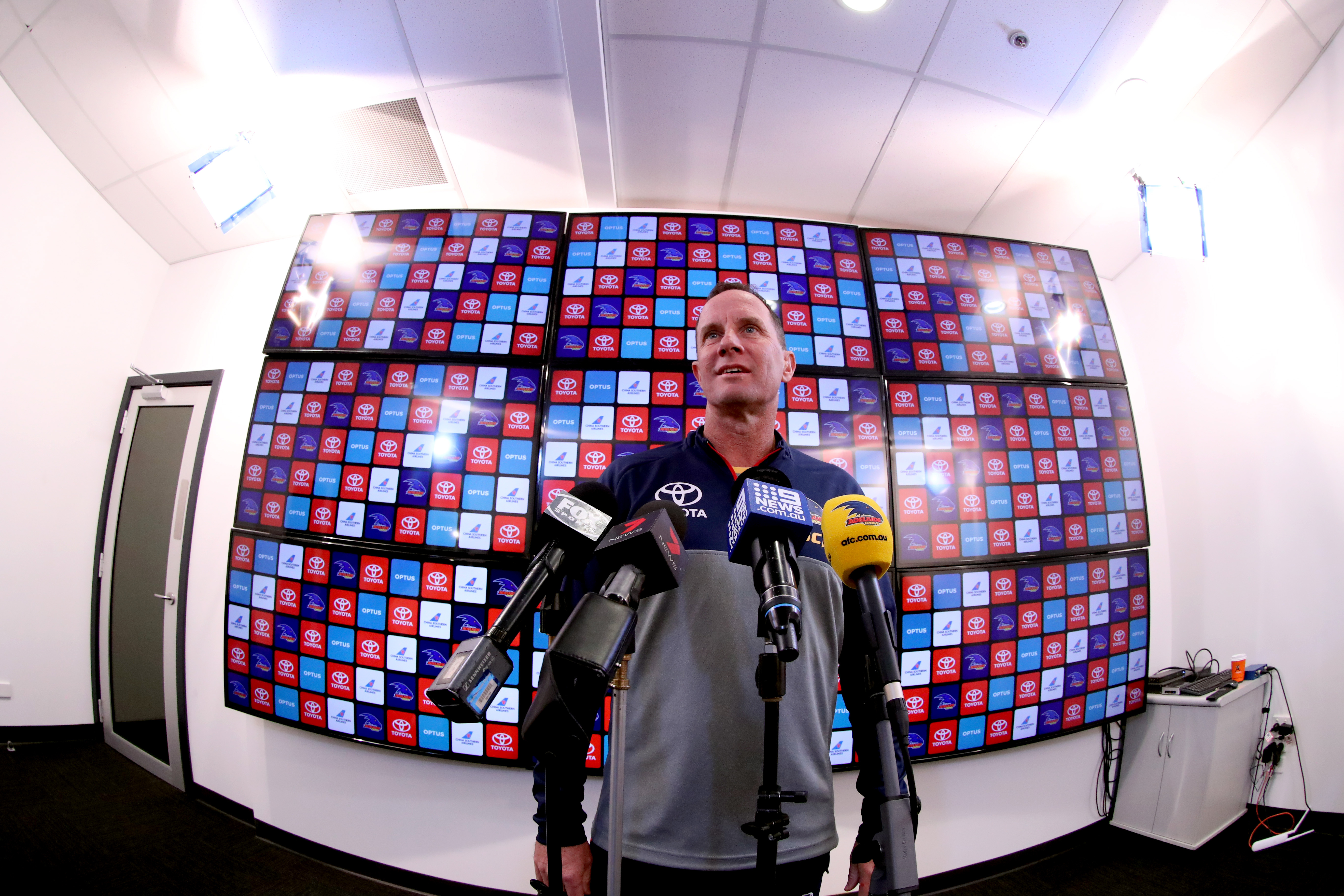 PYKE: Yeah, we were definitely brave, but we probably just lost the field position battle in the end. At the end of the day though, we came here to get four points, and we didn’t quite get it done. But it gives us that belief, that we know our best is good enough.

REPORTER: How so? It wasn’t good enough today…

PYKE: Well, when I say our best is good enough, I mean it’s good enough to lose bravely. And we were quite brave today.

REPORTER: But not good enough to win?

PYKE: Probably not, no.

REPORTER: Why is that? This is a side that played in a Grand Final less than two years ago.

REPORTER: Don, there’s two weeks left of the home and away season, and Port Adelaide have just replaced the Crows in the top eight. It’s not ideal, is it? 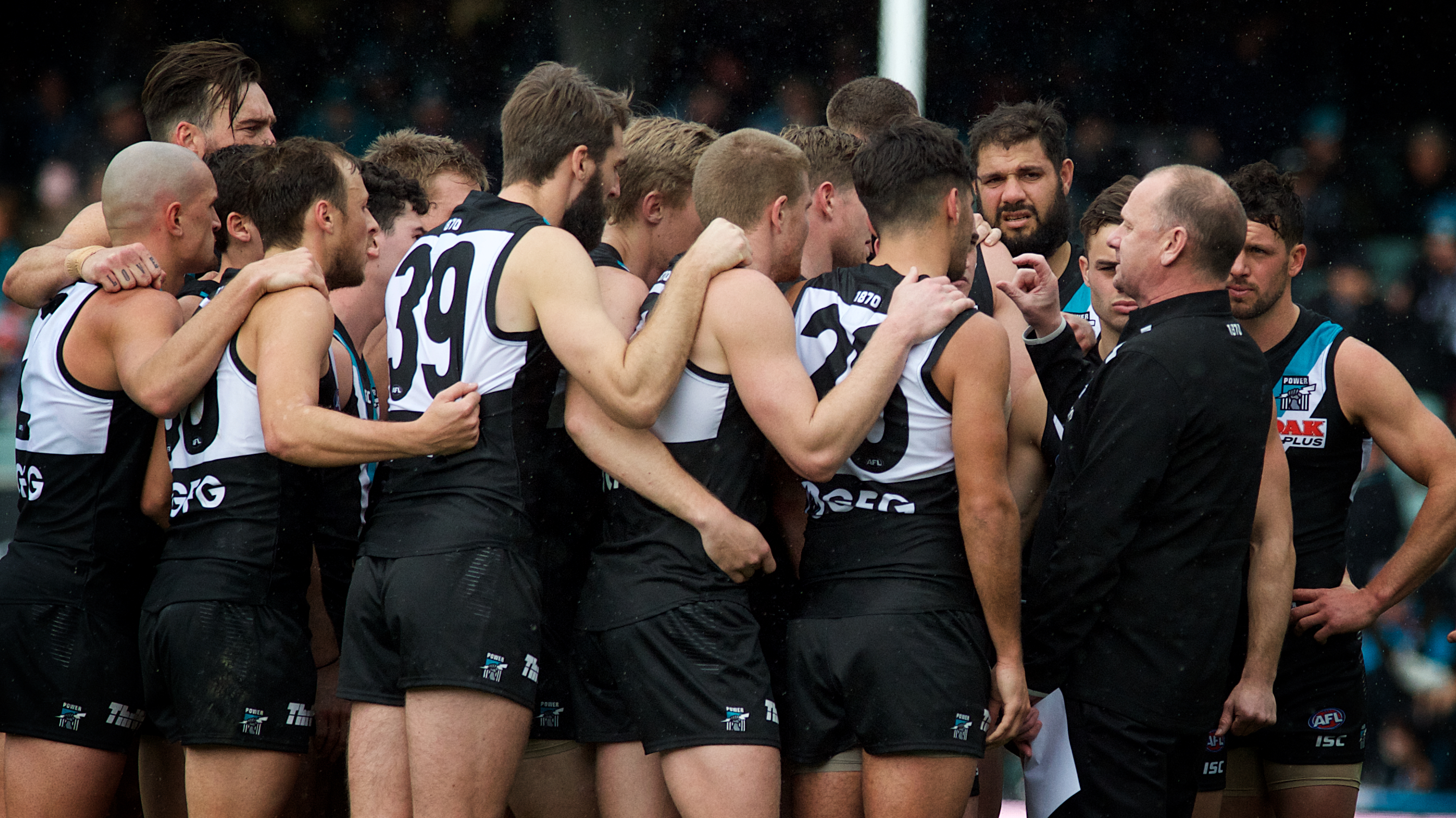 Ken Hinkley uses the Force on one of his players. Photo: Michael Errey / InDaily

PYKE: No, but there were some really positive signs, some things we can keep working on and tidy up.

REPORTER: Does Essendon’s loss give you some hope that you can get back into the eight?

REPORTER: They beat you guys at home literally three weeks ago.

(Crows CEO Andrew Fagan pops his head through the doorway)

FAGAN: Hi guys, would this be a great time to mention that the Adelaide Footy Club has just been recognised in the 2019 Australian Financial Review/BOSS ‘Most Innovative Companies’ List?

PYKE: (sotto voce) Umm, no it probably wouldn’t, Fages, because we’ve just lost our fifth game out of seven since the bye.

FAGAN: (smiling brightly) That’s right, Don, we placed second in the Media, Tourism, and Entertainment category – in addition to being awarded the Best Innovation Program! A great testament to a club of extraordinary passion and continued courage to do things differently in an industry and environment that never stops testing you. Hashtag – proud!

PYKE: Actually, mate, we were just talking about how we’re probably going to miss the finals for the second year in a row, so it might not be the best time.

FAGAN: Ah yeah, right. Get the frustration. Couldn’t get it done in the end. Hashtag – hurts. Lots of work to do. We’ll get to it and look to respond strongly against the Pies.

PYKE: Absolutely, if we can get a win this week, we’re definitely still in the hunt.

FAGAN: A win? Yeah, that’d be great for our KPIs. But I meant respond strongly with a solid turnout. Did I mention we got 50,544 a few weeks ago against Port?

PYKE: Yes, you’ve mentioned it literally every day since. We actually lost the game by ten goals though. 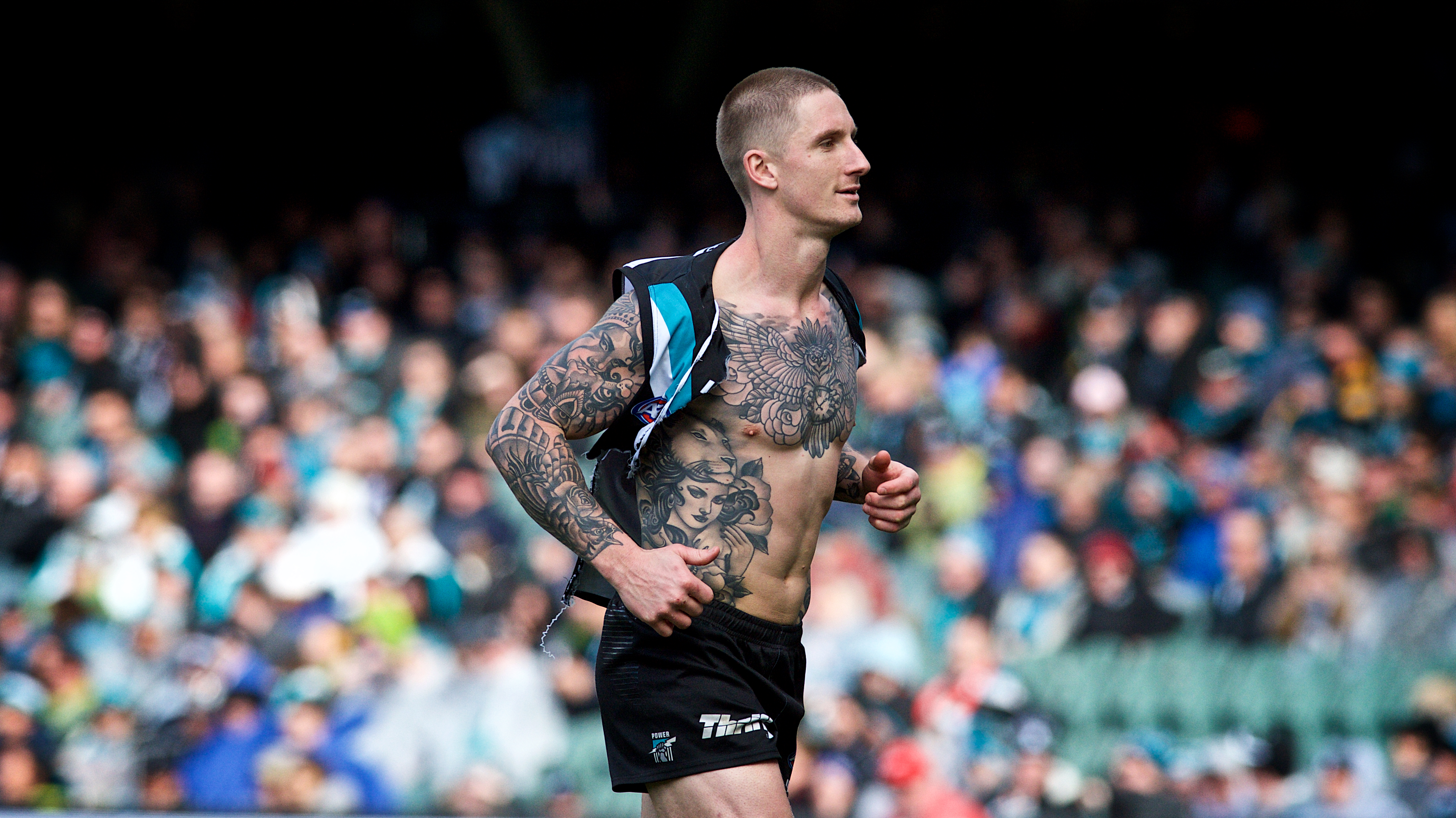 PYKE: We lost that one too.

FAGAN: Yeah, it was a very tough day out. If I recall correctly, I went home afterwards, worked a chunk, hugged my girls, hit the gym and then a run – usual post-loss routine. But, like the other 50,000 at Adelaide Oval, I still loved watching the boys crack in.

PYKE: Absolutely, the players always give it their all.

FAGAN: No, I meant the boys in the merch stand. Sold a stack of 2019 guernseys. Great to see. Anyway, sorry to interrupt. I’m off to clear the mechanism.

REPORTER: Don, five goals for Fogarty. You must be pretty pleased about that.

PYKE: Yeah, he’s been slowly building his craft, but we’ve always known he’s got that capacity.

REPORTER: If you’ve always known that, why couldn’t he get a game?

PYKE: Well, there were just a few things we wanted him to work on. He knows what those things are.

REPORTER: Yeah, but can you say what they are?

PYKE: Not really, no, just some things in a few areas and he’s worked on doing those things. But he’d be the first to say he wasn’t always playing the way he wanted to play and the way we want him to play. And also, field position.

REPORTER: Well, presumably he did enough to keep his spot for next week?

PYKE: I’ll have to have a look at the tape, but that will be a good discussion at match committee in terms of what we do there.

REPORTER: And where does that leave Josh Jenkins? Can you comment about your punch-up a few days ago? 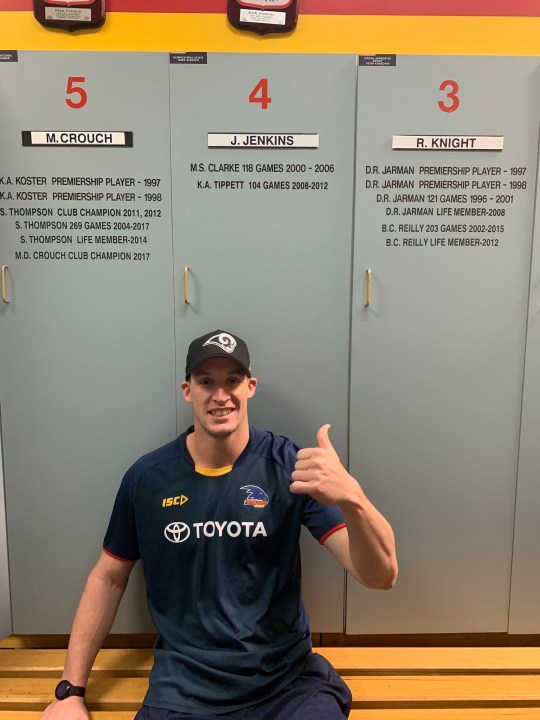 Josh Jenkins convincingly reassuring everyone that everything is fine. Photo: Twitter

REPORTER: The one that was reported in all the papers. It was even on the AFL website.

PYKE: No, that was us denying that there was a punch-up. Which there wasn’t.

REPORTER: (writing notes) “Pyke still denies punch-up with key forward”… Ok, well can you at least comment on the suggestion that you keyed Josh Jenkins’ car on your way out of the carpark last week? That seems crazy.

PYKE: Who said I did that?

REPORTER: Um… I think I saw it on Reddit, maybe. Or Bigfooty? Actually, maybe I dreamt it.

PYKE: Well, don’t believe everything you read on footy forums.

REPORTER: Well, is it true you tried to poison his dog?

PYKE: Of course not. Who said that?

PYKE: Hey, listen champ… this is ridiculous. This is just people putting absolute fiction into the mainstream and saying ‘well, that’s what happened’, and it’s based on absolutely nothing. But people still think it’s fair game to put out things which are not fact. If it wasn’t as serious as it is, it would be laughable, to be honest. 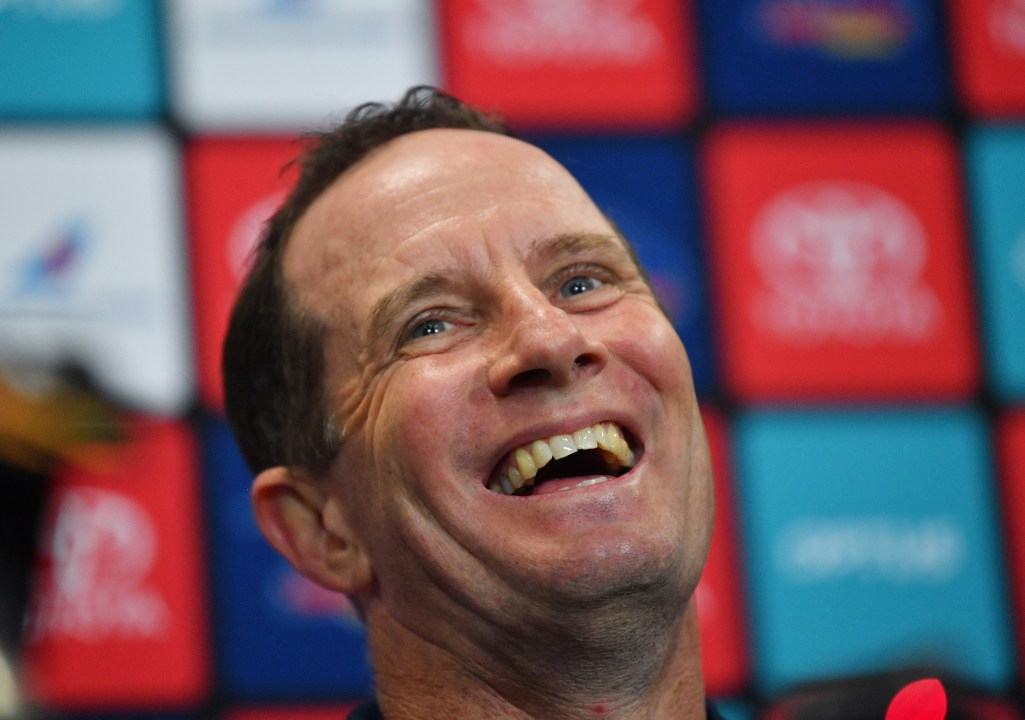 PYKE: I’ve got to say, I’m getting a bit sick of all these made-up things getting reported as fact. This is just like last year, when you guys were reporting that Mitch McGovern wanted to leave the club.

REPORTER: He did leave the club.

PYKE: (Looks confused, checks his notepad for a few moments) Did he? I assumed I’d just lost him somewhere? Are we sure he’s not just working on a few things in the SANFL?

REPORTER: No, he went to play for Carlton, with David Teague. After you all insisted he didn’t want to leave.

PYKE: David Teague…? That name sounds familiar. Anyway, my point is, instead of just reporting something and running a rumour, why wouldn’t you just ring us up and say ‘Is this true?’

PYKE: Go on, ask me anything. Anything at all.

REPORTER: Fine then. Is it true that there are several players who don’t want to be at the club next year?

PYKE: Well, I’m not going to go into any specific detail because I don’t think that’s fair on individuals, but at the end of the day, all our fans need to know is that we’ve got a playing group that’s happy. 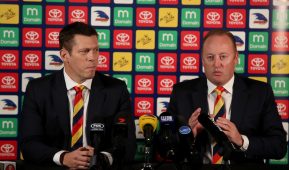 Touch Of The Fumbles: Clearing the mechanism

MEDIA LIAISON: Ok, thanks everyone, Don’s got some other meetings and training and so forth.

PYKE: Yep, I’m off to look for my players. Actually, maybe they did get lost somewhere.

REPORTER: Maybe the MCG in September 2017?

(Media conference ends. Along with, quite possibly, Adelaide’s season.) 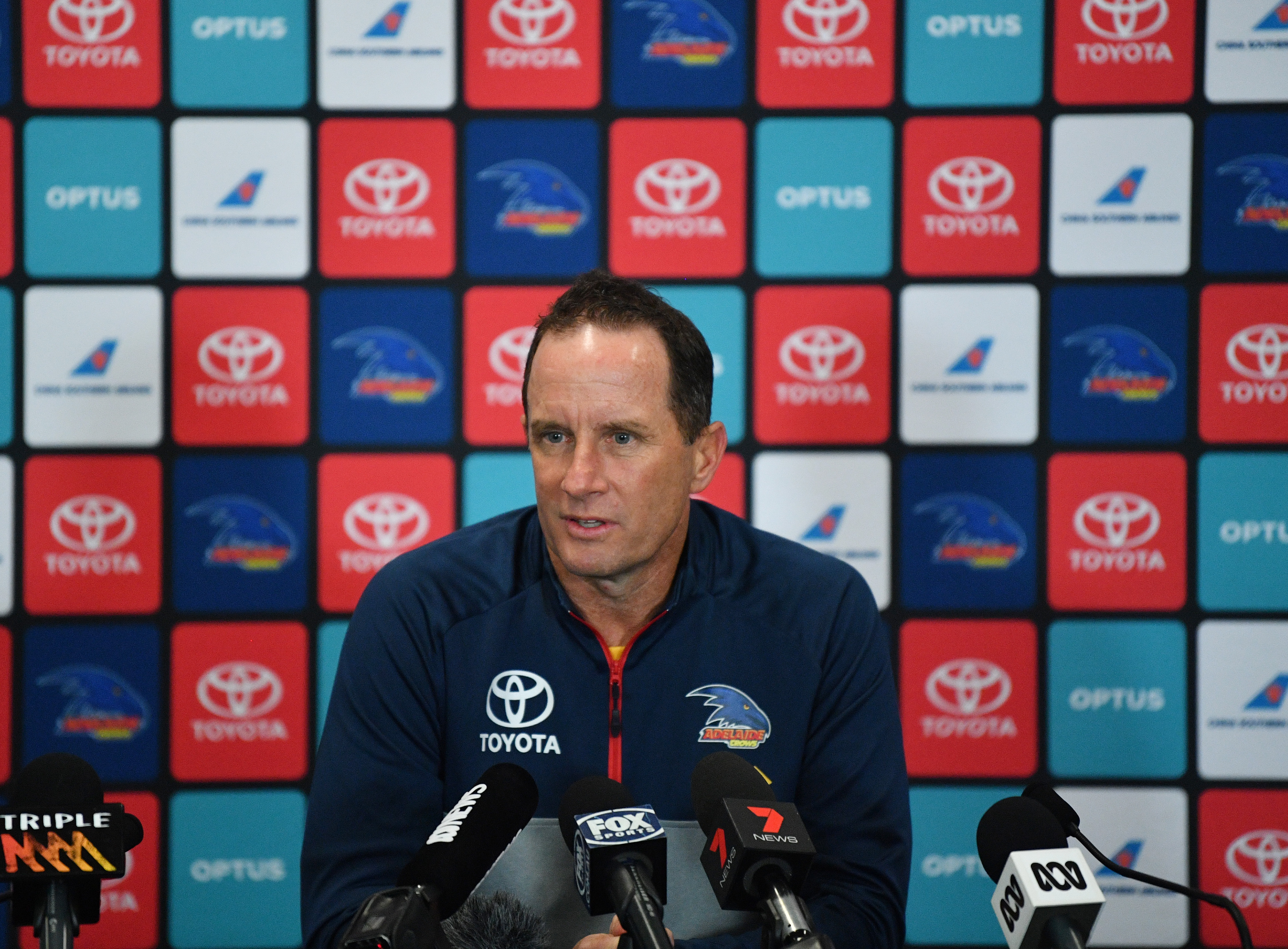 Touch of the Fumbles is InDaily’s shamelessly biased weekly football column, published on Mondays during the AFL season. The above transcript may not correspond entirely with any actual events.