After another seemingly wasted season chasing the twin dragons of that ever-elusive premiership and Carlton’s decreasingly-valuable first-round draft pick, the final insult looms not from the failure of both of these lofty endeavours but from the most usual of suspects.

I mean, you can just see it, can’t you? Three games left, and despite everything, we’re somehow a game clear in September contention. For what it’s worth.

And then the Power – having eschewed their previous yo-yo form with a satisfyingly consistent three-game losing streak – suddenly decide to turn up at Marvel Stadium and obliterate the seemingly finals-ensconced Essendon, who were themselves coming off a five-game run of victories, albeit none of them entirely convincing.

And all of a sudden, that evil bastard Fate’s cunning masterplan of maleficence becomes clear.

Port are going to take our spot in the eight. 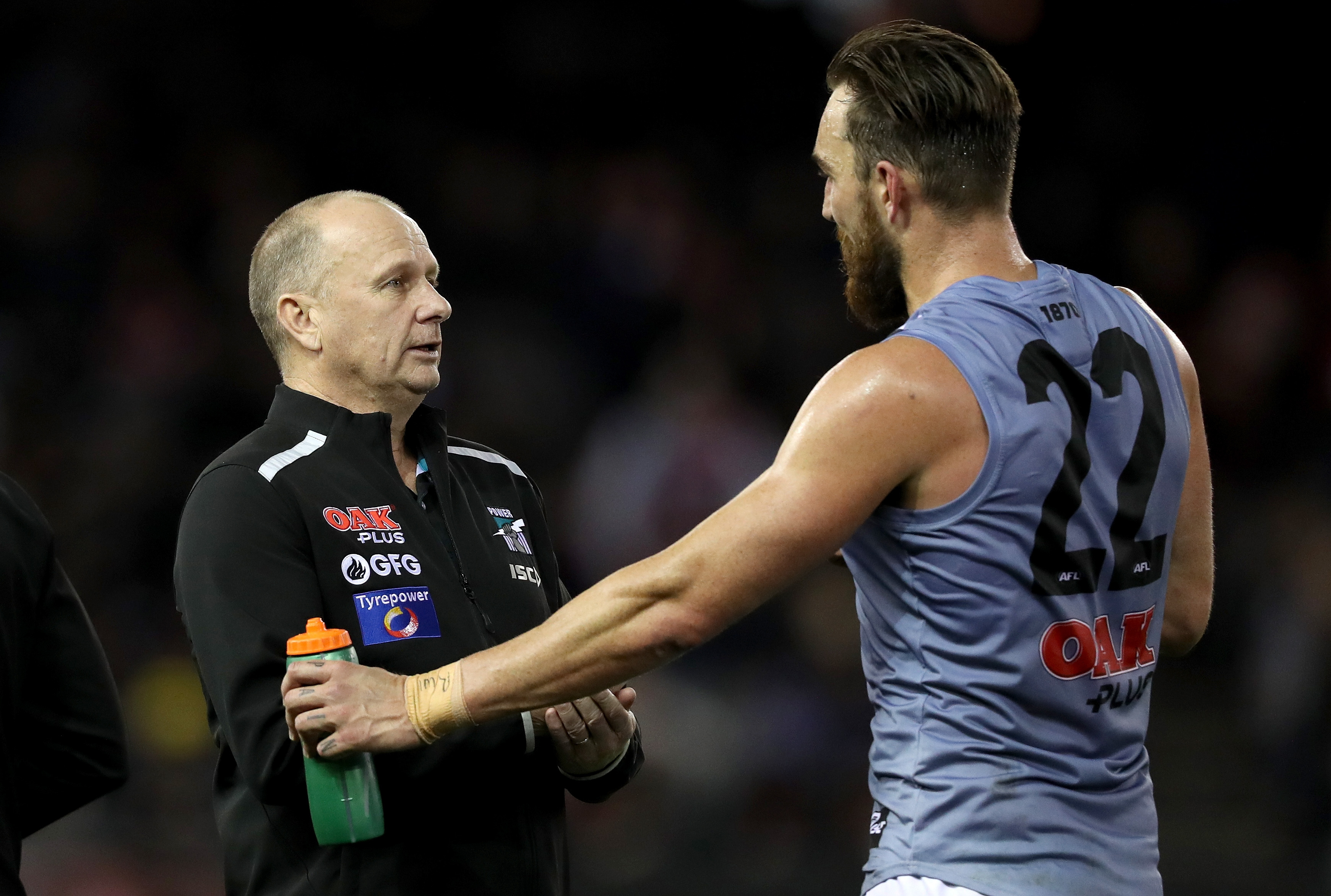 Crazy Ken Hinkley has a word with the one-time missing piece of Port’s premiership puzzle, Charlie Dixon, during their big win over the Bombers. Photo: Mark Dadswell / AAP

Which, to be fair, would be very ‘on brand’ for the Crows in 2019, a season in which we have learned to relish the rich euphoria that can only come from beating 14th-placed St Kilda at home by 22 points, while those twin dragons of premiership glory and a number one draft pick fly off into the sunset.

For most of this season though, it’s been easy enough to forget about Port, to dismiss them as just another flaky, occasionally magisterial, occasionally hapless mid-rung also-ran with a quaint penchant for wacky goal celebrations.

They had, on occasions, come out of left field with the kind of performance that suggests they are on the road to big things – demolishing West Coast at home, stifling Geelong to inflict just the Cats’ second loss for the season in 13 starts and, yes, blowing us away in the second half of that accursed Showdown about which we shall speak no more.

But on each occasion the Power flattered to deceive, their season eventually settling into a reasonably pleasant cadence almost soothing in its rhythmic refrain.

Port and the Crows now sit precariously on either side of the line that divides the final eight from the also-rans.

Adelaide is the higher ranked, with four points and negligent percentage in hand; with the bookmakers however, Port boasts the shorter premiership odds.

This is probably symptomatic of the fact that the Crows, even during that mid-season purple patch that saw us flirting with the misguided notion of a top-four finish, have consistently looked neither inspiring nor inspired. Our relative-hot-streak began with regulation wins over average-at-best sides; we fell over the line against Melbourne, who as it turns out would be in serious wooden spoon contention if it wasn’t for Gold Coast dropping their bundle against them in the dying seconds of their round eight clash.

We needed to rally late to skip away from a veritable Richmond reserves side, and it was only really against GWS – at home – that we genuinely looked like a team worthy of a finals berth.

In short, we’ve become a workmanlike side.

The kind of side you probably wouldn’t bother to watch if you didn’t have a vested interest such as having devoted your entire adult life to the modern-day ‘Waiting For Godot’ saga that is our 21st century premiership quest. 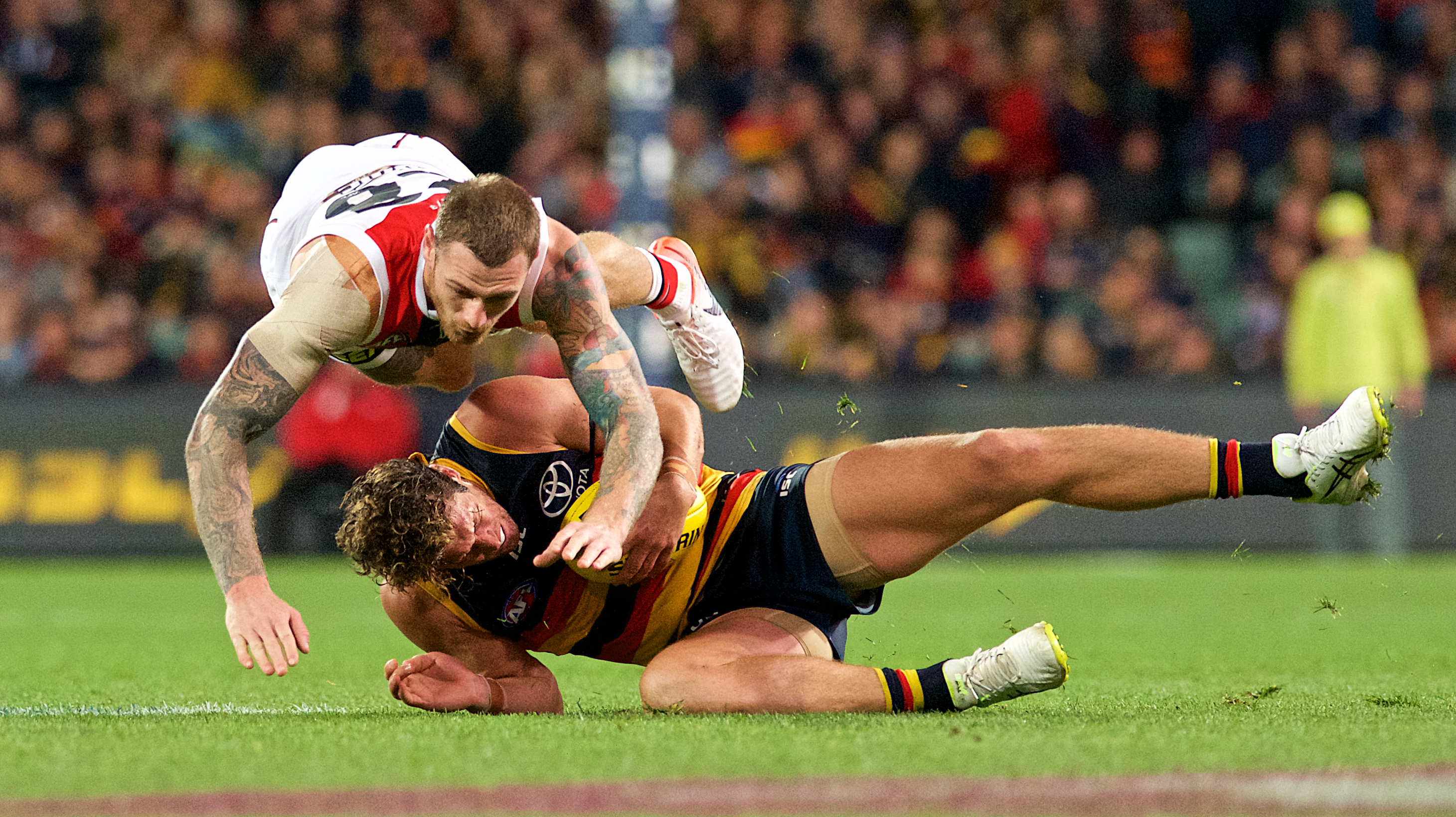 Fortunately, we mostly managed to avoid St Kilda coming over the top of us on Saturday night. Photo: Michael Errey / InDaily

Perhaps it’s just that football clubs are destined to become a reflection of the personalities pulling their strings. And as such, the Crows have become the physical incarnation of the experience you get when you read selected highlights from a Don Pyke press conference.

Whereas Port are coached by ‘Crazy Ken’ Hinkley who, for all his multifarious flaws, is certainly no dullard. Crazy Ken is equally at home gesticulating wildly from the sidelines after a narrow Showdown win or ringing the changes at selection, which has become his 2019 calling card.

For instance, back in 2014 Port famously recruited Paddy Ryder – the missing piece of their premiership puzzle™ – to partner with their then-perfectly competent ruckman Matthew Lobbe.

At the time, Ryder stated he was “excited to get in there and form a partnership with him… I want to become the best ruck combination in the AFL with Lobbes”.

However, playing both rucks together didn’t much work out, and Lobbe was eventually moved on. Port then recruited West Coast ruckman Scott Lycett – who was also apparently the missing piece of their premiership puzzle™ – and who also made positive noises about a prospective ruck tandem.

“I’m looking forward to working with Paddy… he’s obviously a great ruckman and I’m looking forward to silencing the critics of people that say you can’t play two rucks in the team,” he told reporters in December, which doesn’t quite make sense but you can sort of see what he’s trying to say.

Anyway… playing both rucks together didn’t much work out – again – and in recent weeks Crazy Ken first dropped Ryder, then brought him back and tried two rucks again, before dropping Lycett this week.

But the thing is, it actually worked. There appears to be some maniacal method in Crazy Ken’s madness, for each time he ditched one of the two missing pieces of his premiership puzzle, Port went on to have among their best wins of the season.

It didn’t work quite so well when he dropped Charlie Dixon, another one-time missing piece of Port’s premiership puzzle™, for the previous week’s one-point loss to GWS, a defeat largely predicated on the lack of a strong-marking forwardline presence, but you can’t have everything, can you?

And that’s the twisted genius of Crazy Ken.

To be fair, ‘Dreary Don’ Pyke has tried to get out of his comfort zone this season, eschewing his previous policy of Doing Exactly The Same Thing Every Single Week™ in favour of Making A Statement At The Selection Table™ – albeit without much success.

But in general, our respective teams this season have both managed to be average while conforming to two very different manifestations embodied by their respective coaches, Crazy Ken and Dreary Don: one fire and ice, the other somewhere in between, like lukewarm water.

And this, sadly enough, is symptomatic of the Crows’ post-premierships malaise – persistently competent, but rarely incandescent.

Indeed, Adelaide has won 249 regular season games thus far this century – the fourth-highest winning record in the league since 2000.

And yet, we have nothing but an annoyingly-lopsided Grand Final loss and an underwhelming zero flags to show for it all, while the three teams above us (and not far above us, either) – Geelong, Sydney and Hawthorn  – have nine premierships between them.

Even the two teams immediately below us on the extended win-loss ledger, Collingwood and West Coast, have three flags between them over that period.

All of which could go some way to explaining why you’d be hard-pressed to find too many Crows supporters working themselves into raptures at the prospect of merely scraping into the finals this year ahead of one of our traditional first-round exits.

Sure, there was once a time when making the finals felt like an achievement in of itself, but after 21 years there have been too many failed campaigns, too many heartbreaking defeats not to understand instinctively as well as logically that we’re forever doomed to be merely making up the numbers without the so-called armchair ride of the home-final/double-chance combo – and even then we usually manage to stuff it up. 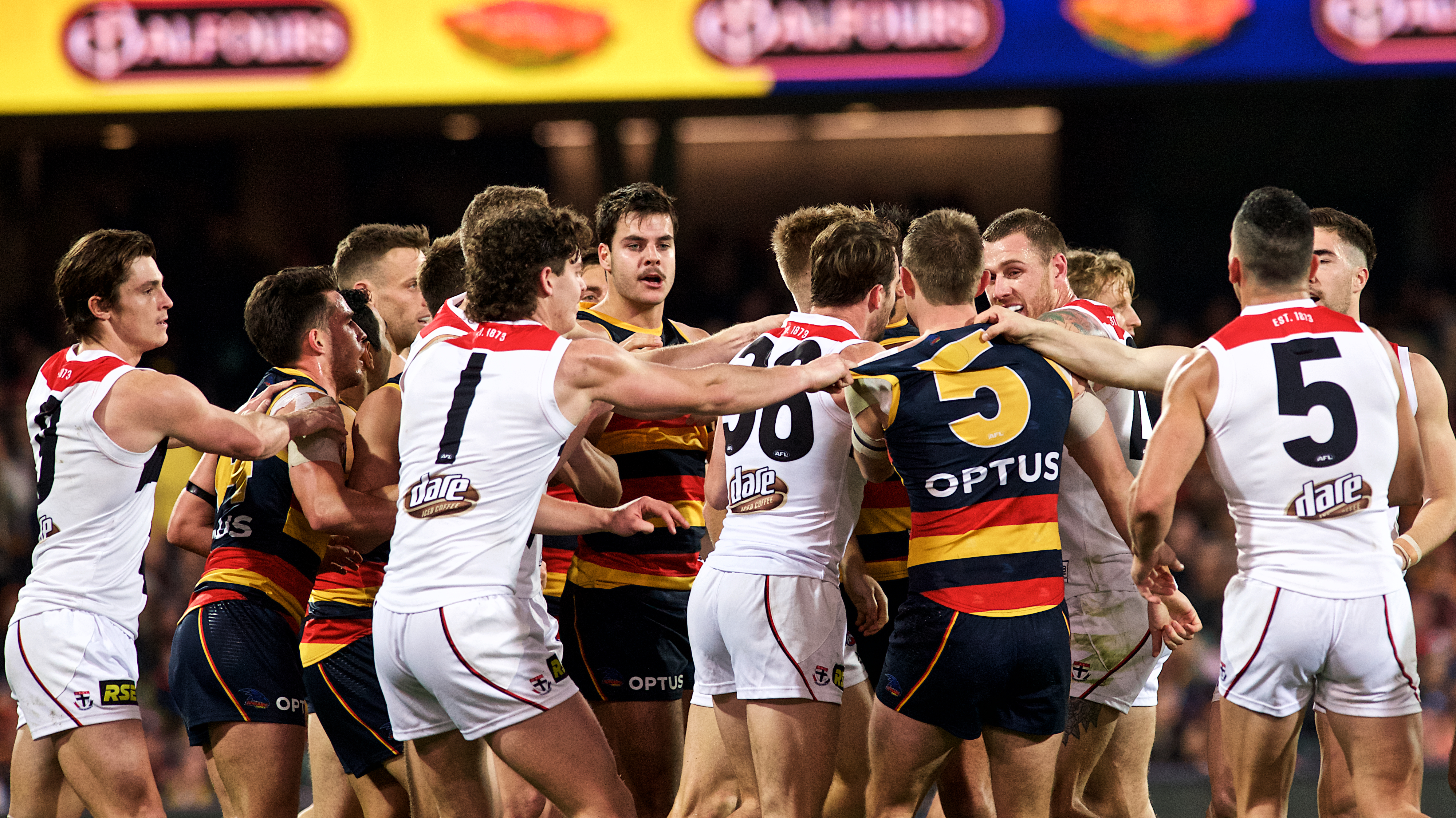 But while making the eight or not might be merely a question of degrees of mediocrity, ceding a finals berth to Port would tip this forgettable year into the realms of disaster.

For I can take the slings and arrows of our outrageous post-’98 fortune, but watching from the sidelines in September while Port players shoot their imaginary bows and arrows might be a misfortune too far.

But you can just see it happening… can’t you?