And, you know what? It may even be for the best.

Or at least, it would be if it weren’t for that damned draft pick swap, in the context of which Saturday’s fixture against the decreasingly lowly Blues is the archetypal eight-point game.

Our Grand Final, even. Or certainly the closest thing we’ll get to one this season. 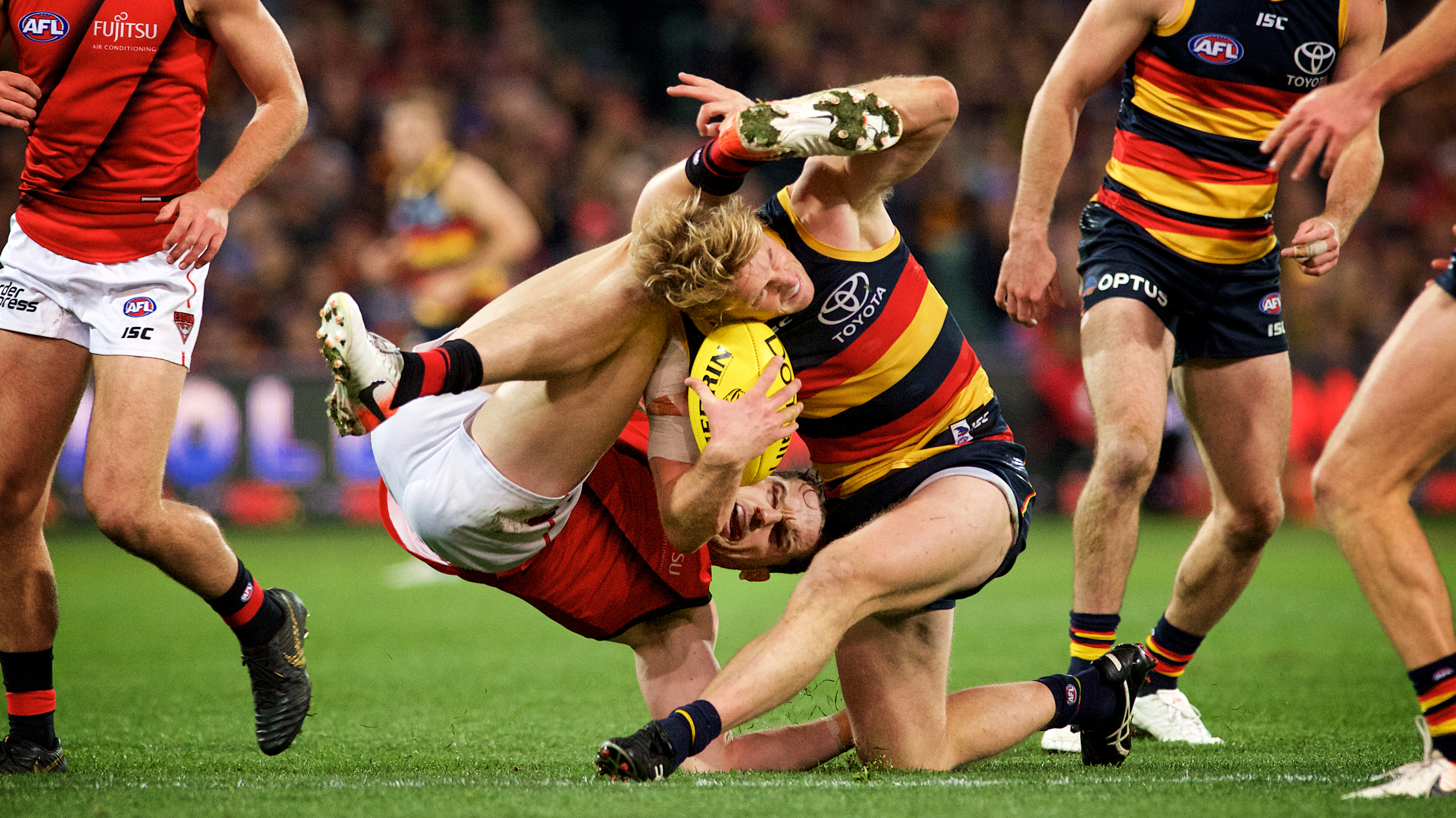 Friday night was a real kick in the head. Photo: Michael Errey / InDaily

You’d hope it goes slightly better than the actual Grand Final we played in a while back but, draft pick aside, we’ve now reached the point at which it would almost be better if we started not merely losing to the league’s good-to-average sides, but the poor ones as well – and fall from finals contention altogether.

That way, at least the Adelaide Football Club would be forced to contend with the precedent it set when it sacked a preliminary final coach after the Crows went on to miss the major round in the ensuing two seasons, because – as chairman Rob Chapman so succinctly put it – “we won’t accept mediocrity”. 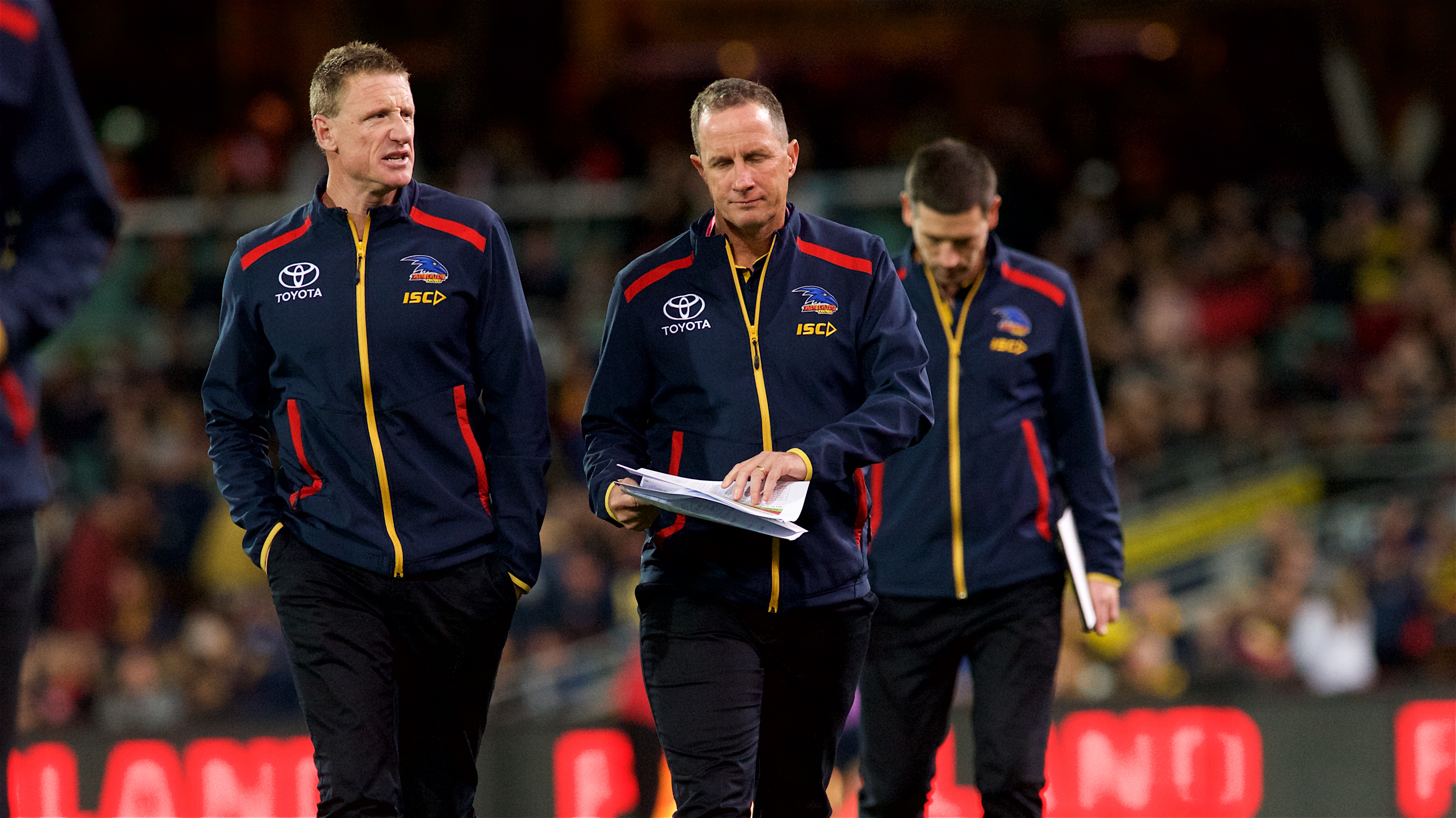 And yet, we don’t just accept mediocrity – we revel in it.

Despite the club’s bizarre insistence to the contrary, our 2017 Grand Final appearance was the outlier, not the standard. And it would be abundantly fair to describe the Crows in the same terms Martin Amis once described John Fowles: as a middlebrow, to whom it has never occurred that they are anything but highbrow.

Mediocrity, thy name is Adelaide. 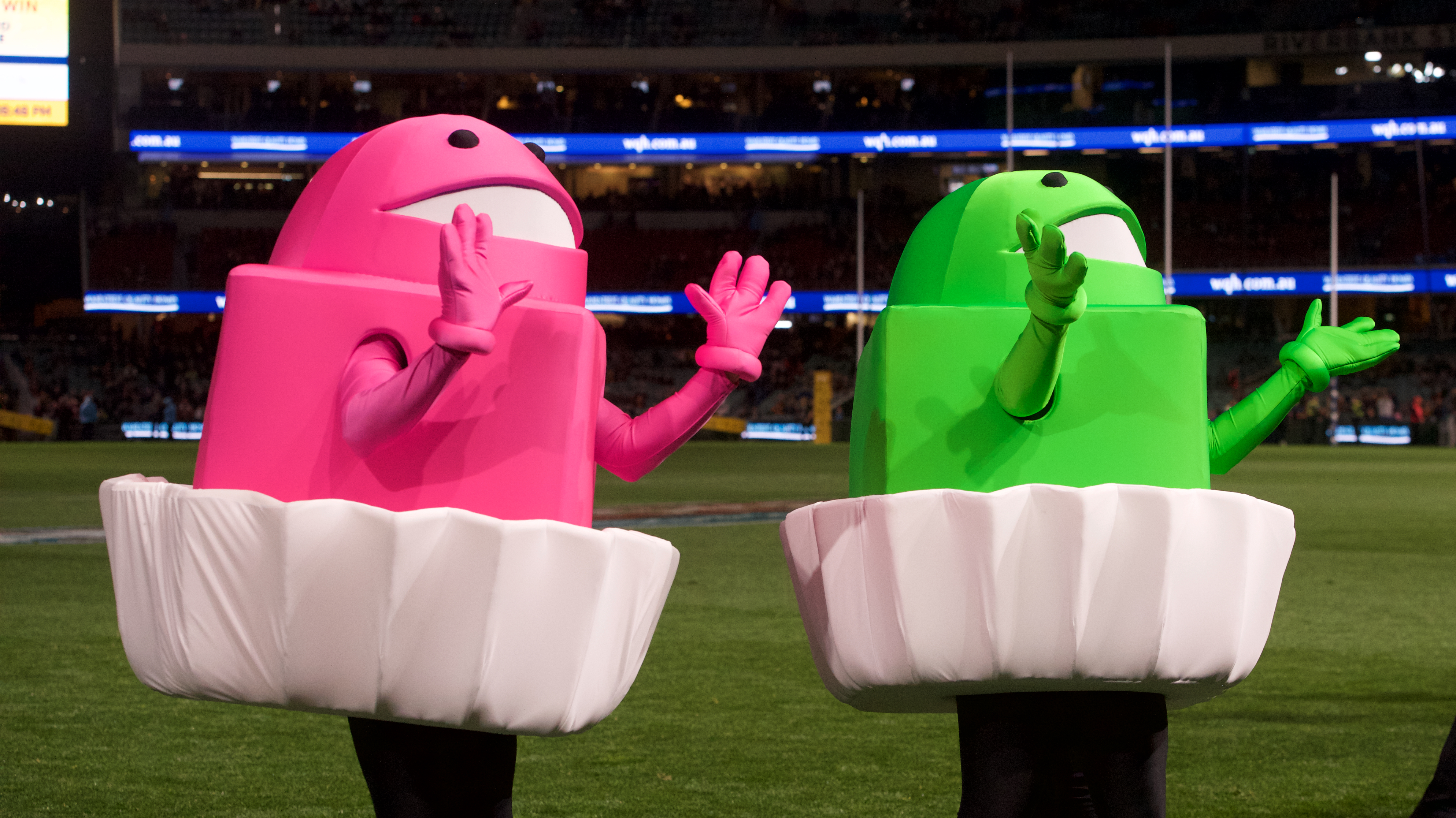 A pre-game marketing gimmick or Adelaide’s forward line? Your guess is as good as mine. Photo: Michael Errey / InDaily

And as such, if and when the team scrapes together the requisite number of wins against also-rans, courtesy of a softish draw, to make up the numbers in the finals, the club will be no doubt talking up 2019 as another successful outing, citing the obligatory attendance figures and all-important bottom line.

Followed by another pre-season of sweet-nothings about rediscovering the joy of football before yet another year of treading water while we celebrate being middle-of-the-road.

So perhaps instead what we need now is not to go through the motions en route to an early finals exit, but rather a complete clusterfucking disaster. 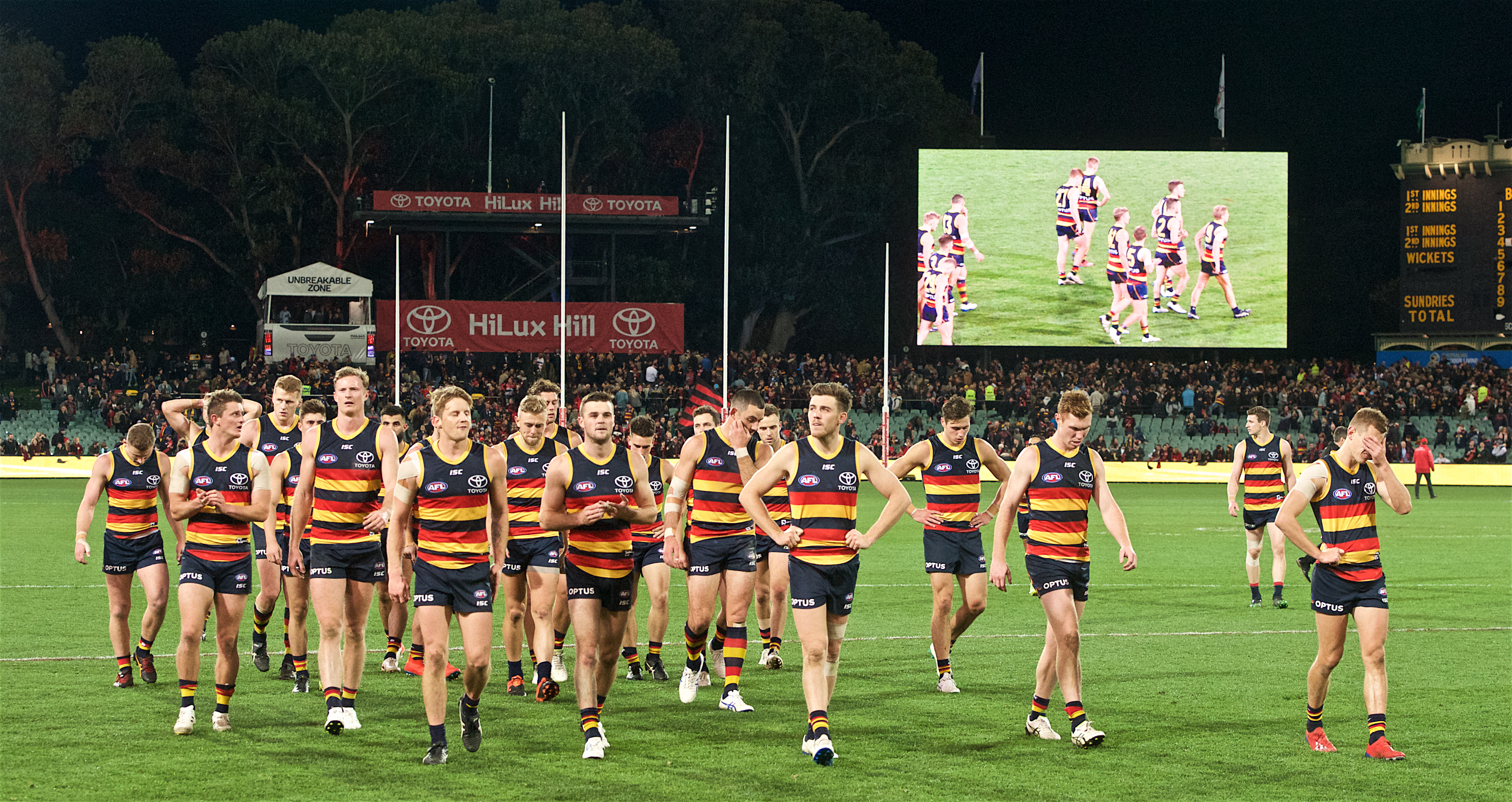 A bit like this one. Photo: Michael Errey / InDaily

Although, to be fair, the weekend just gone came close.

It has truly come to something when my only consolation for an entire round of football is a Richmond win.

And scant consolation it was too, given for the third time in four weeks the Crows put in an encouraging if wasteful first half only to collectively stop as our opponents made us look tired, immobile and bizarrely unmotivated.

It was also the second time in as many years that we’ve done much the same thing against Essendon: built a handy lead only to let them run all over us.

Fortunately, for the second time in as many home games, I missed the watching the capitulation live altogether thanks to an unfortunate scheduling error – in this case the pre-season booking of group tickets to see The Book Of Mormon, the musical comedy theatre brainchild of South Park creators Trey Parker and Matt Stone.

Which is probably apt, for while I was chuckling at a second-act bombardment of gags about dysentery and diarrhoea, the Crows were facing the Bombers and serving up their own turd of a second half.

Our forward line was once again dysfunctional. Tex was well off the pace, save for a lone goal-of-the-round contender, while Eddie looks increasingly lost when he’s playing sides who aren’t the Suns.

At least Port choose to be inconsistent on a weekly basis: Adelaide does it quarter-by-quarter.

But we have the dubious comfort that we can set our watch by the coach’s traditional post-match post-mortem.

I read a news story on the weekend about academic analysis of social media over the federal election campaign revealing that between April and May around 13 per cent of Twitter accounts were “very likely” to be bots.

That inspired me to do some research of my own, which has revealed that between 2005 and 2019, at least one out of every three people who coached the Crows were also “very likely” to be bots.

Still, the theatre was good, thanks for asking. And unlike the footy, it got better as it went along.

And you know what? Even before the now-traditional Crows capitulation, I wasn’t even that annoyed about the scheduling clash.

Maybe it’s Adelaide’s interesting strategy to swap their former high-scoring, attractively free-flowing game style that also seemed to win games for a dour, tedious one that loses games instead, or merely the fact that after 21 years of prioritising a middle-of-the-road football team, some of life’s other pursuits suddenly start to look a little more engaging.

But either way, I’ve clearly spent far too long putting too many eggs into one emotional basket.

Which is one reason this season has been a welcome distraction in at least one way: that Carlton draft pick. 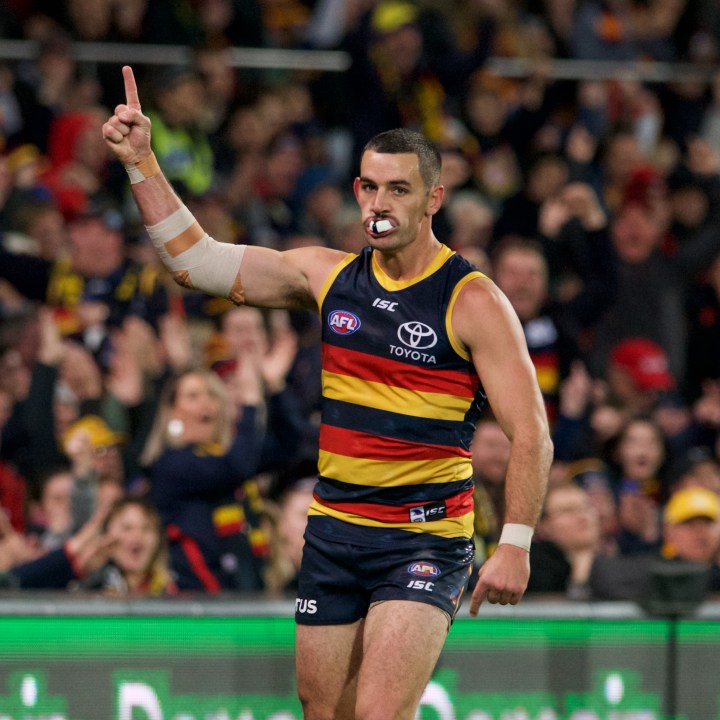 Tex explaining how many goals he kicked on Friday. Photo: Michael Errey / InDaily

Sure, the Crows have been bad, in that predictably middlebrow way that they are always bad – which is to say, they are often quite good, but never enough to have anything much to show for it.

But we have at least been able to diversify our emotional investment, to celebrate not merely our own scant fortunes, but the fortunes of any and every team that beat the Blues in 2019.

And now comes our Grand Final (or at least the closest thing we’ll get to one this season).

Some context for those who’d marked this down as a gimme: since the Blues sacked Brendon Bolton (to whom we should probably devote a stand at Adelaide Oval or something?) they’ve won four out of six games, and the two losses were by a combined eight points.

Meanwhile, we’ve lost three our of our last four, and the one win was against an opponent that had apparently never played football before, which diminishes it somewhat.

Still, the Suns evidently learned a few tips over the subsequent week, and at least pushed Carlton right to the final term – proving, if nothing else, that they don’t require a priority pick (take note, AFL).

But the Blues, inevitably, rose another rung on the ladder; if they carry on like this our once-top end draft pick will end up being decidedly middle-rung. 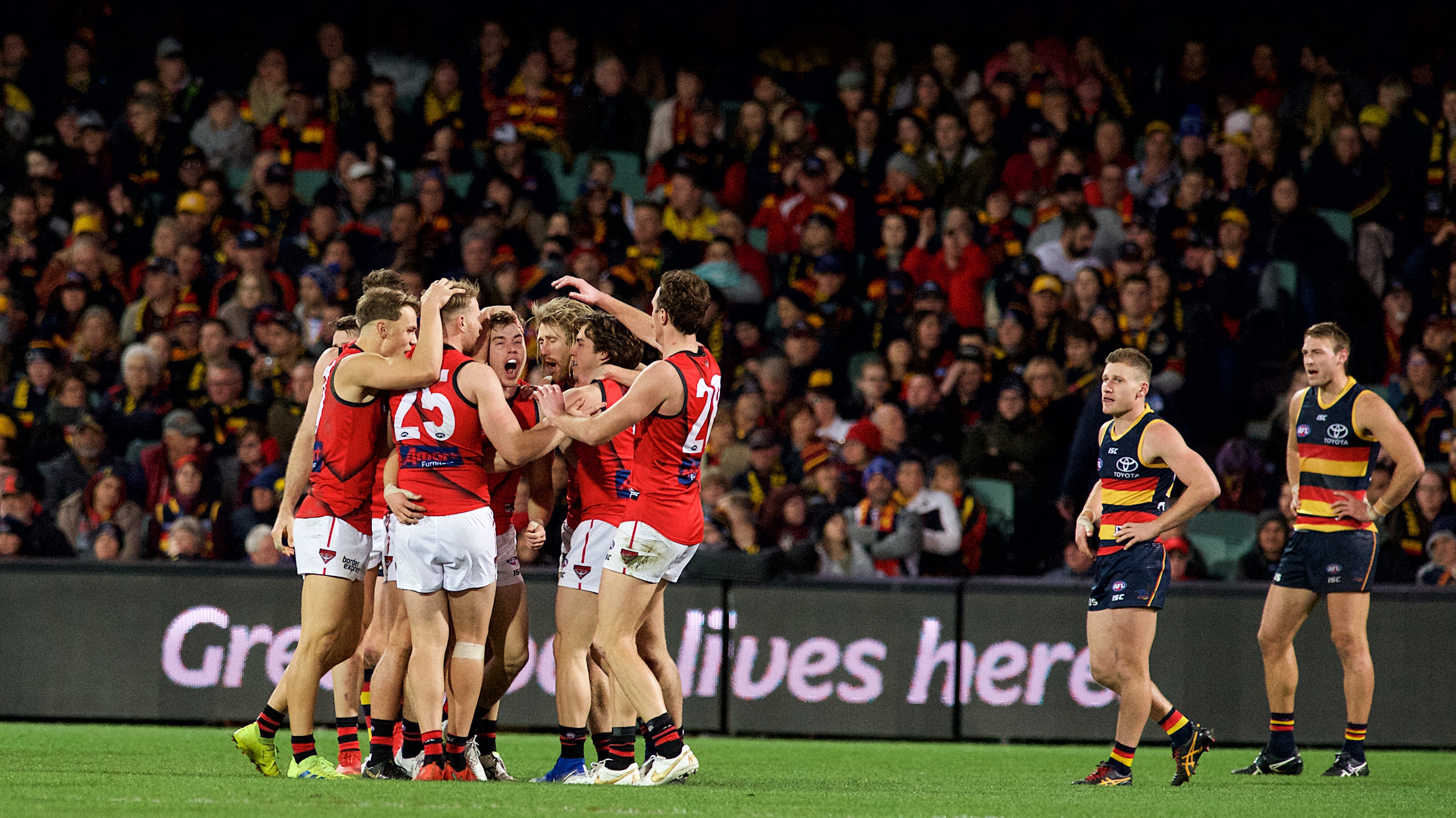 The Bombers’ win was not without… Merrett. Photo: Michael Errey / InDaily

Indeed, late-season flurries from the likes of Hawthorn and the Bulldogs have seen them, as the cliché goes, “keeping their finals dream alive” – paving the way for an unlikely September charge at the expense of the team currently placed eighth, which is… oh right.

But talking of Butters, at least Port’s annual late-season decline and fall appears to be on schedule, as they put yet another arrow through the hearts of their true believers.

Although on the bright side for Power supporters: at least they’re being consistent now.

They might have ruined my ongoing narrative about their yo-yo form, but if it had to end – I’m glad it ended this way.

Add to that another soapbox spray by president David Koch and its been quite the week at Alberton. This time around, Kochie used one of his non-football jobs to complain that assistant coach Michael Voss shouldn’t be applying for other coaching gigs until post-season, and should “focus on the job at hand” (namely, overseeing Port’s fall down the ladder).

We may not like to admit it, but the two Adelaide sides have a bit in common; neither looks capable of launching a concerted challenge anytime soon, but neither is bad enough to incite a major overhaul.

Indeed, another SA flag in the near future feels ever more unlikely, leaving us all doomed to merely reap the schadenfreude of our respective failures. A very South Australian fate, really.

So yes, we might well beat Carlton on Saturday… but a little part of me kinda hopes we don’t.

It may even be for the best. And if not, it’s at least probably what we deserve.

We deserve a disaster to break us out of our mediocre lethargy; throw away the finals tilt, forget about the draft pick, and really ponder what it is in this team’s DNA that makes us so perpetually average.

As for me, maybe next home game I’ll go to the theatre again instead.

Better that, than yet another kick in the nuts from my infernally mediocre football team.