I mean, sure, there was the twice-tied epic World Cup final and Wimbledon’s record-setting tiebreak, not to mention Lewis Hamilton’s record sixth British Grand Prix victory.

All of which were pretty good.

Of course, we’re not much into objectivity here at Fumbleland. But it’s at least fair to say, I think, that – objectively – Port Adelaide are an Interesting Team.

If one were being less objective, one might call them instead annoying, amusing or just plain confusing – depending on your personal proclivities and whether it’s Port’s designated ‘Win Week’ or not.

Which, this week, it wasn’t. 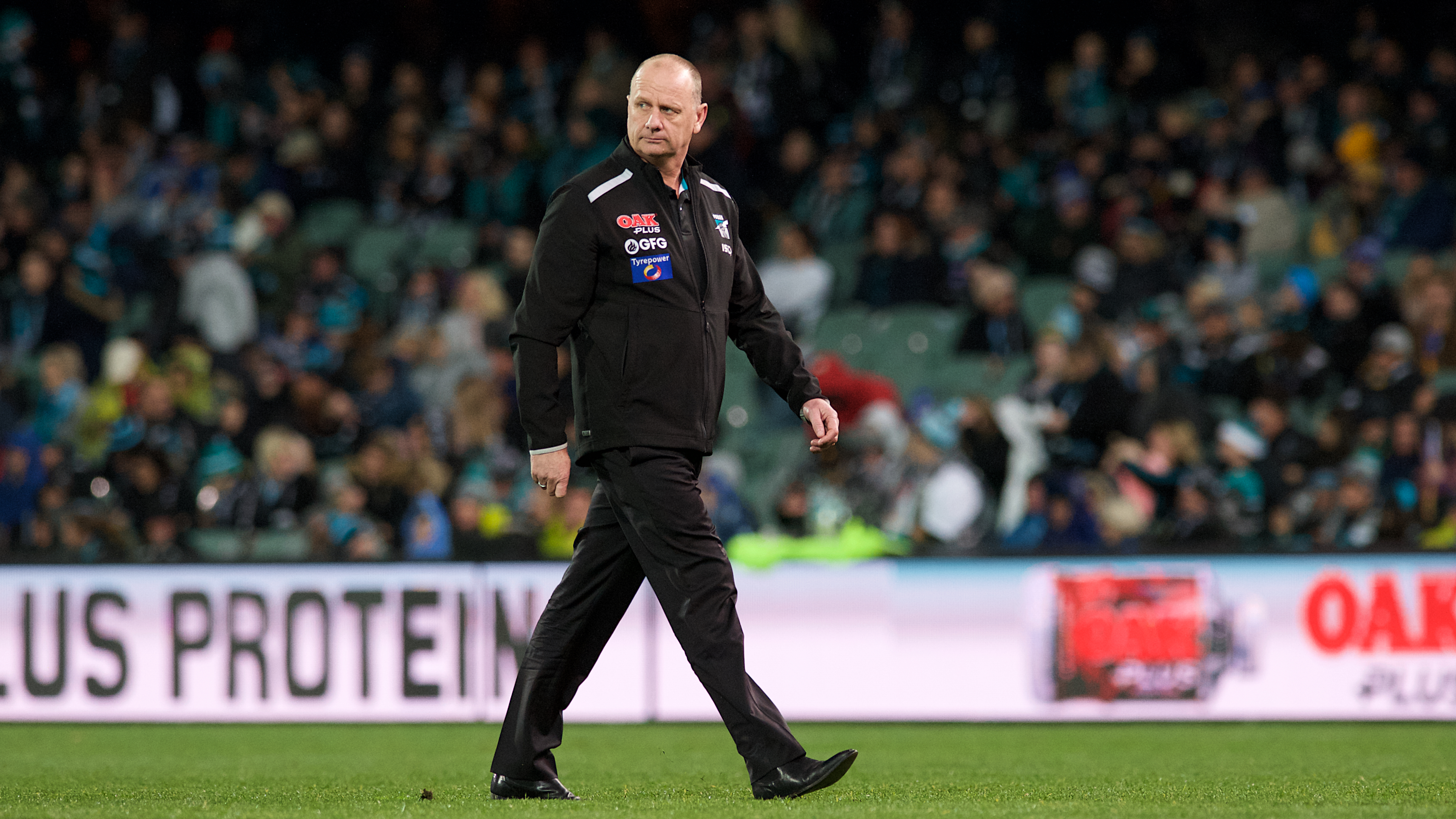 Apparently there’s an old Chinese proverb that it’s a curse to live in interesting times, and I’m sure that’s not lost on supporters of the Power – a club which, after all, is well-versed in Chinese wisdom.

There is an irony that Port’s topsy-turvy season actually makes theirs the most consistent formline in the past eight weeks: if they win one week, they must lose the next. And vice versa.

I don’t make the rules.

Moreover, the wins must be season-defining, reputation-stamping triumphs: a Shanghai shellacking, snapping Geelong’s hot streak, humiliating their crosstown rival – that sort of thing. While the losses must be equivalently woeful: failing to score for the entire final term against Freo, losing at home to the non-finalist Bulldogs…

That sort of thing.

While one might have joked about this being Port’s designated ‘Loss Week’, it was clear within minutes that this team takes that obligation very seriously indeed.

Not to dwell on matters unpleasant, but for context: last week, against us, Port kicked the final nine goals of the game.

Whereas yesterday, against Brisbane, they conceded the first seven.

Which, given the margin pretty much hovered around that same mark from thereon in, was probably not a Very Clever Thing To Do.

The irony, mind you, is that a loss for the top-four-ensconced Lions would have been – objectively – quite helpful really.

But still, less objectively – what the hell!

It’s just possible, of course, that Port’s collective mind (so to speak) was on a task other than the one at hand. 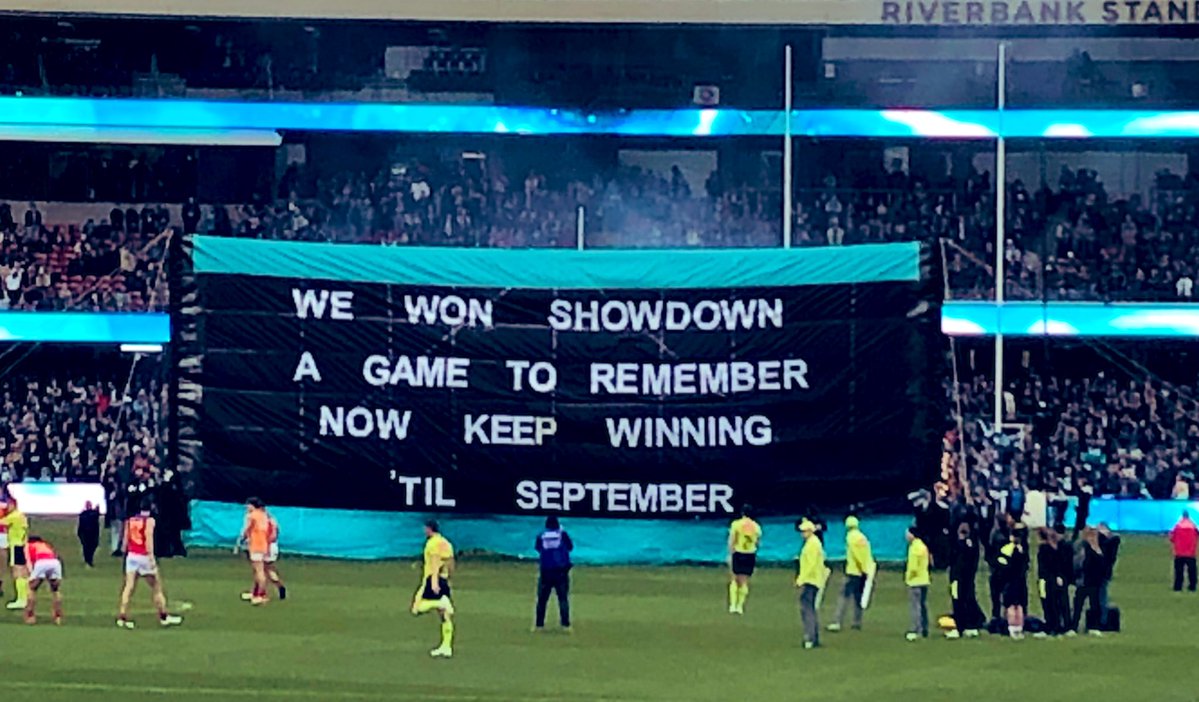 I’m all for schadenfreude, but this might be labouring the point somewhat – evidently revelling in last week’s annihilation (of us) while simultaneously pondering a rare finals campaign, even as their season was on the verge of its regular fortnightly collapse.

Given Port’s recent history has demonstrated the propensity to make an art out of setting high expectations and then spectacularly failing to fulfil them, this was a slightly odd gambit, although it certainly made the following 22 minutes or so even more enjoyable.

For one thing, you’ll obviously get a solid win next round.

But moreover, I have magnanimously come up with a plan to solve your psycho team’s fortnightly dilemma.

Port have already broken with 149 years of tradition this season by anointing co-captains to lead the team.

So the answer’s obvious: co-coaches.

Every time Port wins, Ken Hinkley seems to be hailed for pulling some pivotal masterstroke: pitching Houston on Tim Kelly in the win over the Cats, or somesuch.

But whenever they lose, he has a complete mare.

So here’s the plan: Hinkley gets to coach every second game, and after that he takes the next week off. 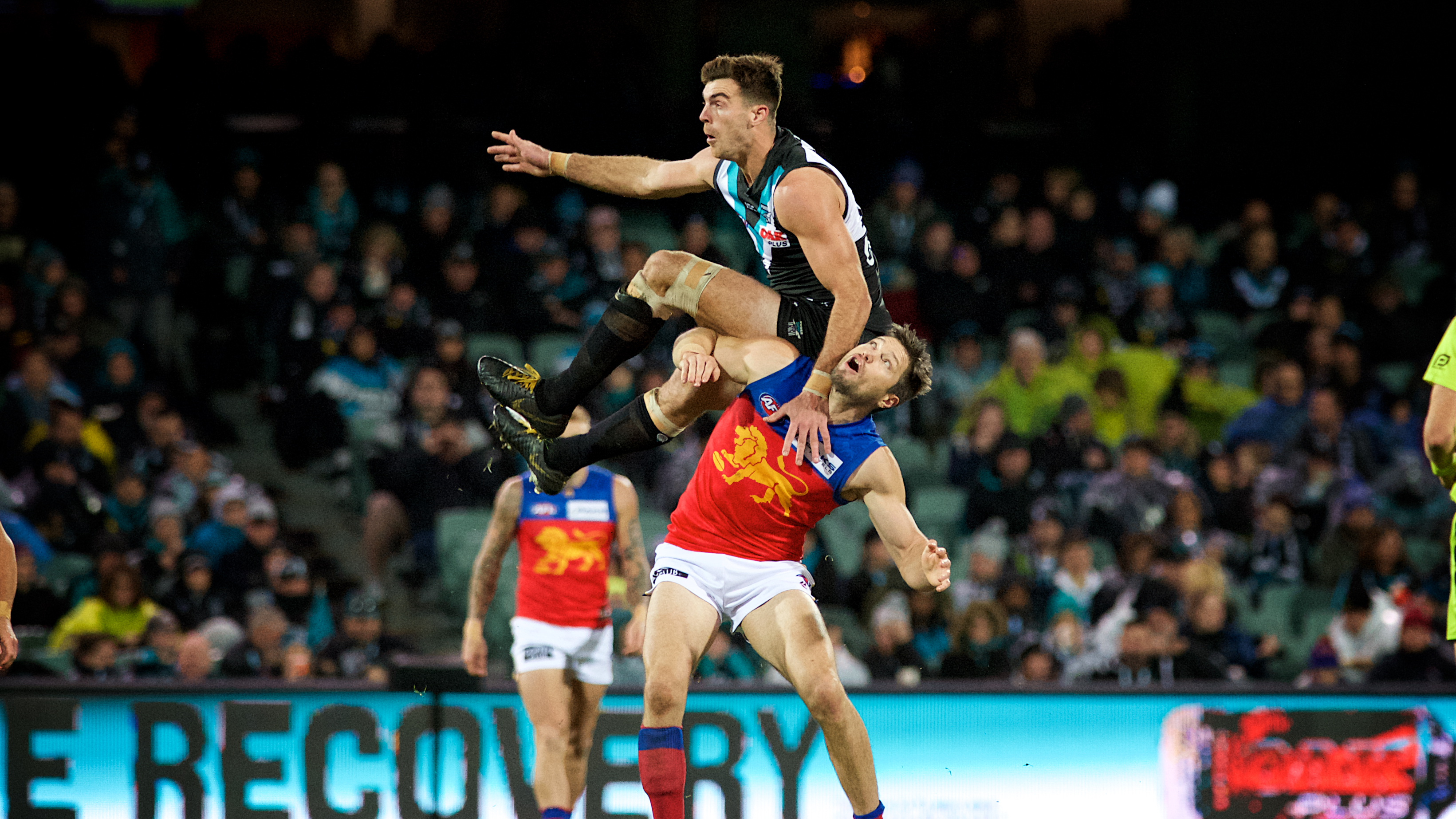 True, that would mean paying him a reported million dollars or thereabouts a year to effectively stay away half the time – but it’s clearly a worthy investment.

And then you just have to find someone else to coach the other 11 weeks (excluding finals, which Port generally do).

Stuart Dew may be free sometime soon, by the looks of things. Worth a call. 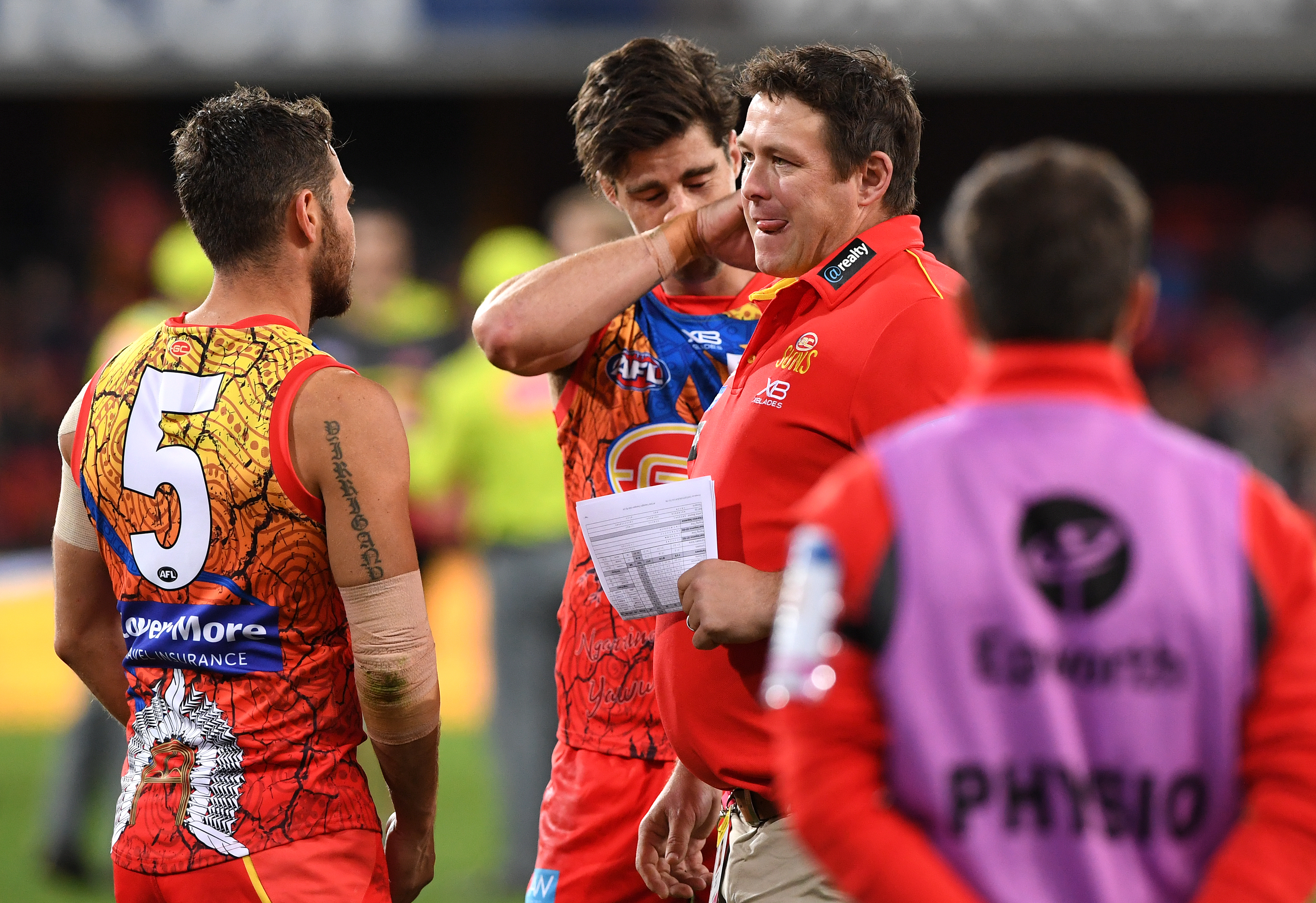 The Suns coach had to bite his tongue during his three-quarter-time address. Photo: Dave Hunt / AAP

For while his club may be seeking to cruel our ingenious first-round-pick trade with Carlton by crawling along to the AFL demanding a priority pick at the top of the draft, I have an even more cunning plan.

We let the Suns fold, we’ll take Lukosius and Rankine (and maybe Sam Day) and we’ll commemorate the Glory Day of their crappy former team every so often by re-watching their breakthrough 2011 win over Port.

Because Gold Coast, it’s fair to say, is a failed experiment. An unsightly pimple on the face of the national game.

Still, we mustn’t be too harsh.

This is the second time this year that the Suns have effectively salvaged Adelaide’s season with a timely percentage-boosting win after a disastrous defeat, thanks to which I can now return to my regular hobby of trying to convince myself we can somehow drag our fortunes from the mire into which we seem so dumbly intent on sinking.

And (speaking of collective minds) while it’s not uncommon for a Crows trip to the Gold Coast to end up with people demoralised and humiliated, it’s nice to see it happen to a team other than us this time round.

So in the spirit of magnanimity, and while I’m dishing out Useful Advice, here’s a Handy Hint for the Suns going forward.

Stop using The Beatles’ ‘Here Comes The Sun’ as a crowd warm-up track.

Yeah, I get that you’re trying to draw some connection between the titular ‘sun’ and your team’s name, but your handful of supporters struggling through yet another AFL season of lacklustre losses doesn’t need reminding that “it’s been a long, cold, lonely winter”, nor moreover that “it seems like years” since you’ve bothered turning up.

They certainly didn’t on Saturday night, falling ten goals down at the half en route to a 95-point drubbing.

Mind you, how ironic would it be if this was the performance that ultimately snares them the priority pick? 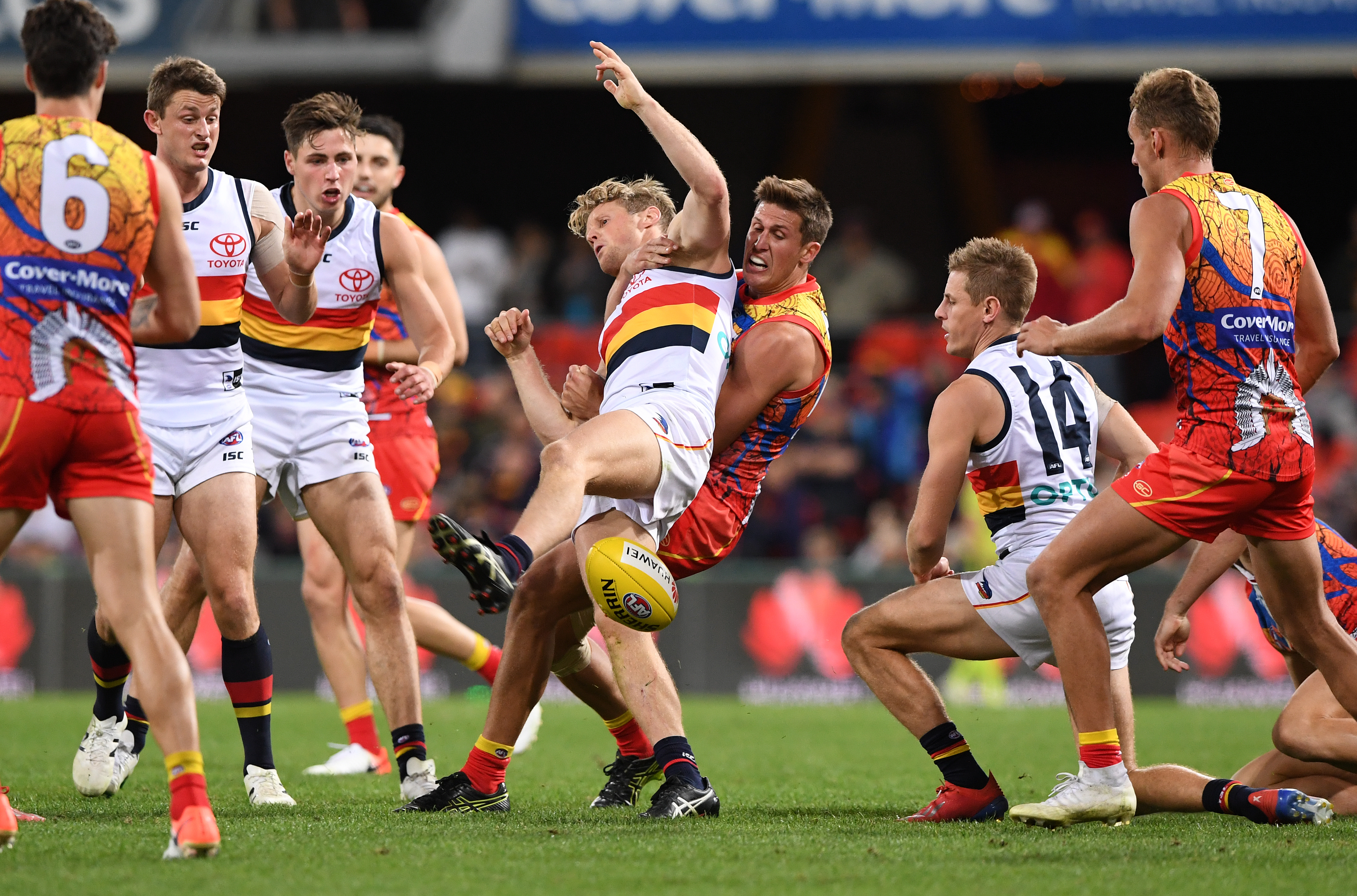 Unfortunately for the Suns, one Swallow does not a season make. Photo: Dave Hunt / AAP

They should have lost by triple figures too, but for a couple of junk-time goals at the death.

While I’m doing my best to eschew pointless symbolism these days, when the Crows got to a 107-point lead with four minutes left on the clock, I allowed myself the forlorn hope that we might reach the epitome of symbolic margins – 119 points – and that doing so would provide some sort of omen that we’re still in the hunt in season 2019.

But in the end, the requisite two goals went to the Suns instead, leaving us with the underwhelming sense of having merely done what was required and no more – namely, restored our squandered percentage against a side that will likely not win another game this year, and possibly ever.

There would have been, of course, some minor consolation if we’d somehow lost to the Suns (as opposed to winning by 95 points), as it would have kept us in the hunt for Carlton’s decreasingly likely Number One draft pick.

But unhappily, the Blues increasingly appear to resemble a semi-competent football team. And moreover, they play Gold Coast this week. And us the week after.

And given that we are, likewise, a semi-competent football team, it’s eminently possible we’ll find a way to gift them their sixth win of the year. Which would make all this wailing and gnashing of teeth about Gold Coast’s priority pick neither here nor there, really.

Fortunately, I’ve already more or less given up on this season altogether, so Carlton’s newfound competence doesn’t bother me at all and I’m actually entirely relaxed about it.

After all, our premiership hopes may be all-but dashed and our consolation draft pick sliding down the order by the week, but at least the season maintains one considerable point of interest in these accursedly interesting times.

We still have Port.