A fine, sunny winter’s day with no sign of the promised rain, and I was swilling boutique gin among the McLaren Vale vines, at a 40th for a friend (of my wife’s) who evidently does not check football fixtures when scheduling important life events such as being born.

Now, in the normal run of things, this might be considered Unhelpful. Distasteful, even.

I mean, I completely get that watching football might not be your bag, but that’s no reason to inflict Not Watching Football on the rest of us, is it?

After all, we get plenty of time to Not Watch Football during the week, without having to do it on the weekend as well.

(Except, of course, when those philanthropists at the AFL helpfully schedule games on Mondays, Wednesdays and/or Thursdays, as they managed to do on 12 blissful occasions this season, bless ‘em.)

And yet there does appear to be a minor running theme in my life that friends (of my wife) are wont to occasionally interrupt my planned AFL engagements with unrelated celebrations of their own existence.

For instance, one friend (of my wife, mind you) has organised a birthday blowout weekend in Melbourne that clashes with Grand Final Day. GRAND FINAL DAY.

I’m sure there’s something in the Geneva Convention against this.

And the problem with such events is you simply can’t explain, nine months out and to non-football enthusiasts, why it’s an inconvenience.

“Oh, is your team playing?”

“Well, probably not, but the thing is, I don’t really know yet.”

“Well, when will you know?”

“Um… maybe a month beforehand, but also maybe not till, um… that same week?”

“But if your team’s not playing, that’s fine then?”

Still, in the event, being forced to miss the Crows’ home Showdown on the weekend just gone turned out to be a welcome serendipity.

Because the Crows’ home Showdown was, for want of a better term, Utter Crap.

Sure, it started brightly enough, with Adelaide hitting the scoreboard seven times more than Port did in the first half, albeit hitting it in a kind of annoying way that doesn’t really have any impact.

We took the lead again early in the second half – so early, indeed, that it seemed we were set to run away with the whole thing – and then…

That goal to Walker to open the third term was to be, bizarrely, our last of the afternoon.

One can only assume the club invited Collective Mind to do the halftime rev-up, which with the benefit of hindsight was probably a mistake.

A Power-supporting friend of mine (which really should be an oxymoron, come to think of it) noted in the aftermath that he couldn’t remember the last time Adelaide had played so badly against his club.

And there’s a reason for that.

Because we never have. 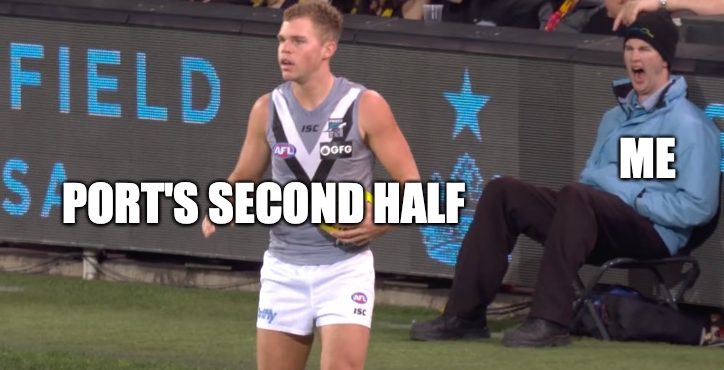 How bad? Well, we went into the last quarter 35 points down, and clearly needing to launch into an all-out attack.

And yet the final term was played almost solely in Port’s forward half, as we managed to add just two measly behinds to our three-quarter time total.

And, just to add some salt to an already-gaping wound:

But you’ll be pleased to know the 40thwas nice.

And I guess the result couldn’t have been helped in any case; it was, after all, Port’s designated week for a win, following the trajectory of their consistently-inconsistent season.

Still, it’s hard to know how things have gone so far off the rails for the Crows. Things started normally enough pre-game.

We had the standard build-up on Thursday (or, as it’s known in Adelaide, ‘Bryce Gibbs Dropping Day’), with Josh Jenkins, as tradition dictates, declaring himself a certain selection, a gambit that’s always paid dividends for him in the past.

Apparently the gambit paid off and JJ was selected as promised, although witnesses to the game itself can’t be sure.

Still, at least Gibbs would have had some wry post-game consolation…

The weekend didn’t get much better either; bottom-placed Gold Coast’s 84-point halftime deficit gave me the distinct impression that they might not be 100 per cent committed to our ‘Number One Draft Pick’ cause, and by Sunday there was only one glint of consolation on the murky horizon. 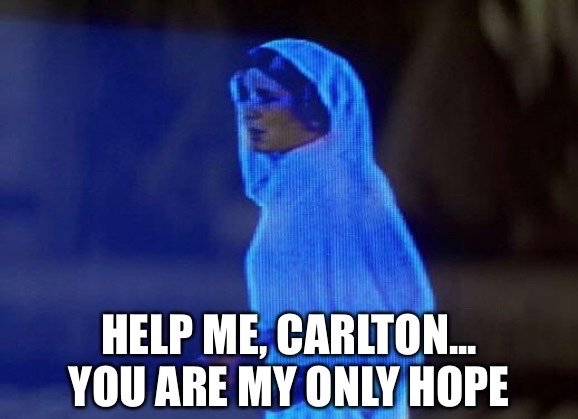 They almost pinched it too, the Blues, sneaking ahead of the injury-hit Dees with minutes on the clock, in a match that could have seen our draft hopes further slide.

But Melbourne rallied at the death, ensuring we’re still, sort of, on track for the dubious consolation of Number Two in the draft…

But the real Number Two we should be concerned about right now is that turd of a performance Adelaide dished up, an outing so dispiriting that even the fact we get to play the Suns this week should hardly be cause for complacency (although if we do lose, it might at least push Carlton back into bottom spot, at least for a week or so).

Even Port’s choice of liquid hydration was taking the piss. Photo via Channel 7 coverage.

It’s the kind of defeat that’s so defining, you’ll still recall where you were when you watched it many years hence (in the course of po-faced discussions about our 40-year premiership drought, presumably).

And fortunately, on this occasion, I can say I was supping G+Ts in a vineyard and growing increasingly relieved that I wouldn’t have to brave the post-game Adelaide Oval exodus (although, to be fair, by that point there weren’t too many Crows supporters left in the stadium). 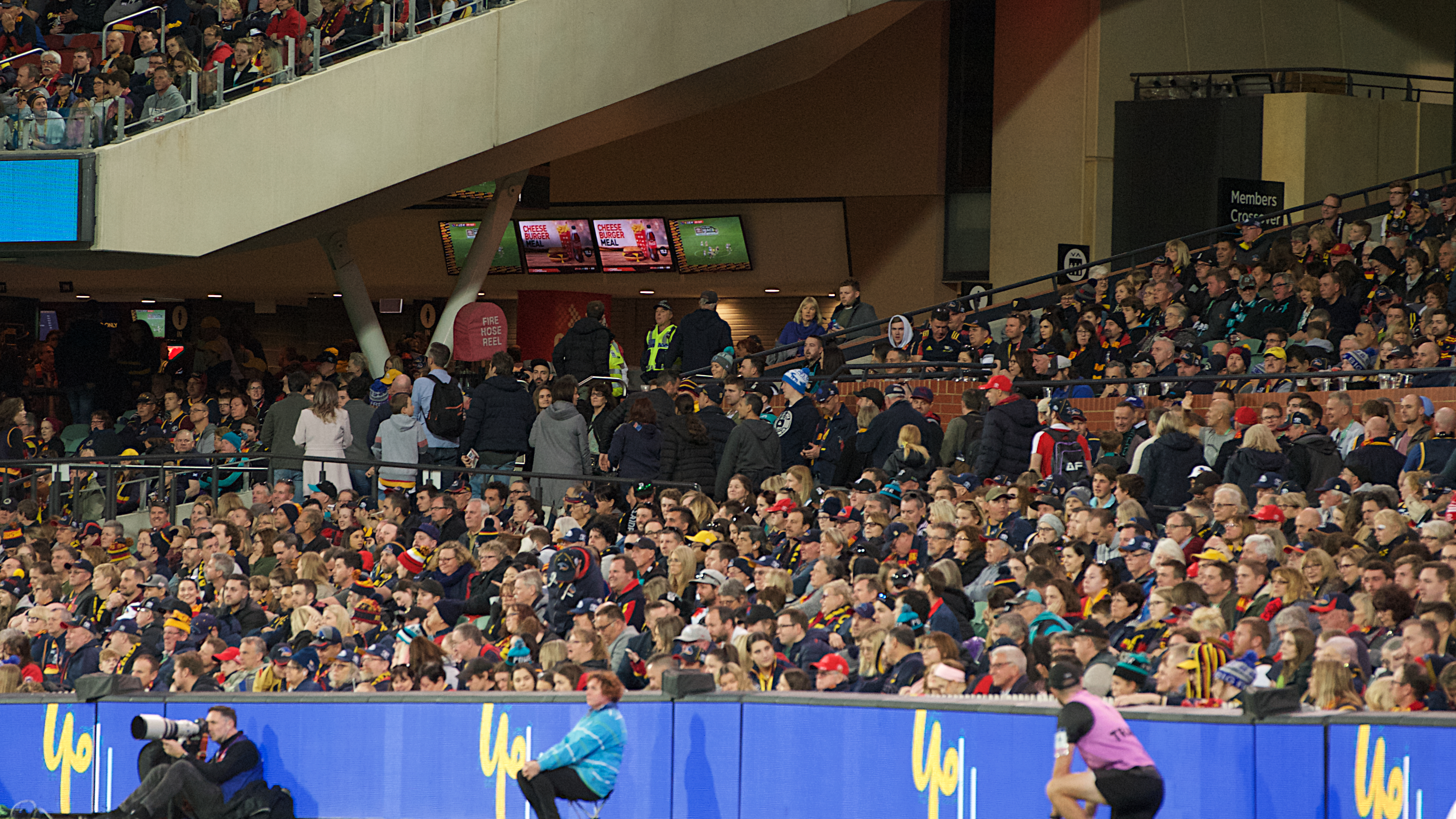 So counterintuitively, I guess, we should embrace the people in our lives who force us on occasion to Not Watch Football.

Or at least to experience it while doing other things, to infuse the memory of glorious wins (remember those?) and hideous losses (with which we’re now getting wearily familiar) with their own unique flavours.

Nick Cave wrote a mini-essay recently about separating Morrissey’s musical canon from his latter-day lunacy, in which he noted that a piece of music, once written and released, is offered up to an audience to “take possession of that song and become its custodian”.

“The integrity of the song now rests not with the artist, but with the listener,” he wrote.

“When I listen to a beloved song… I feel, at my very core, that that song is speaking to me and to me alone, that I have taken possession of that song exclusively. I feel, beyond all rationality, that the song has been written with me in mind and, as it weaves itself into the fabric of my life, I become its steward.”

I think sport is much the same.

And even though at its heart, football is about the 22 players representing the club you support, trying their hearts and guts out in a bid to forge a collective achievement from a motley collection of souls and talents, once the final siren sounds I’m only really concerned with how the results affects… well, me.

And, to be honest, some of my favourite (and least favourite) football memories have been those infused with something that makes the experience unique to me.

You know that scene in the final stanza of the movie of David Williamson’s The Club where it cuts to Graham Kennedy as the ousted club president sitting on his couch at home, watching alone as his team wins a grand victory?

When I was younger I considered that scene poignant; these days, though, I reckon he had the right idea.

As I get older, I’ve come to appreciate that watching football on TV, alone and uninterrupted, is one of life’s great pleasures. 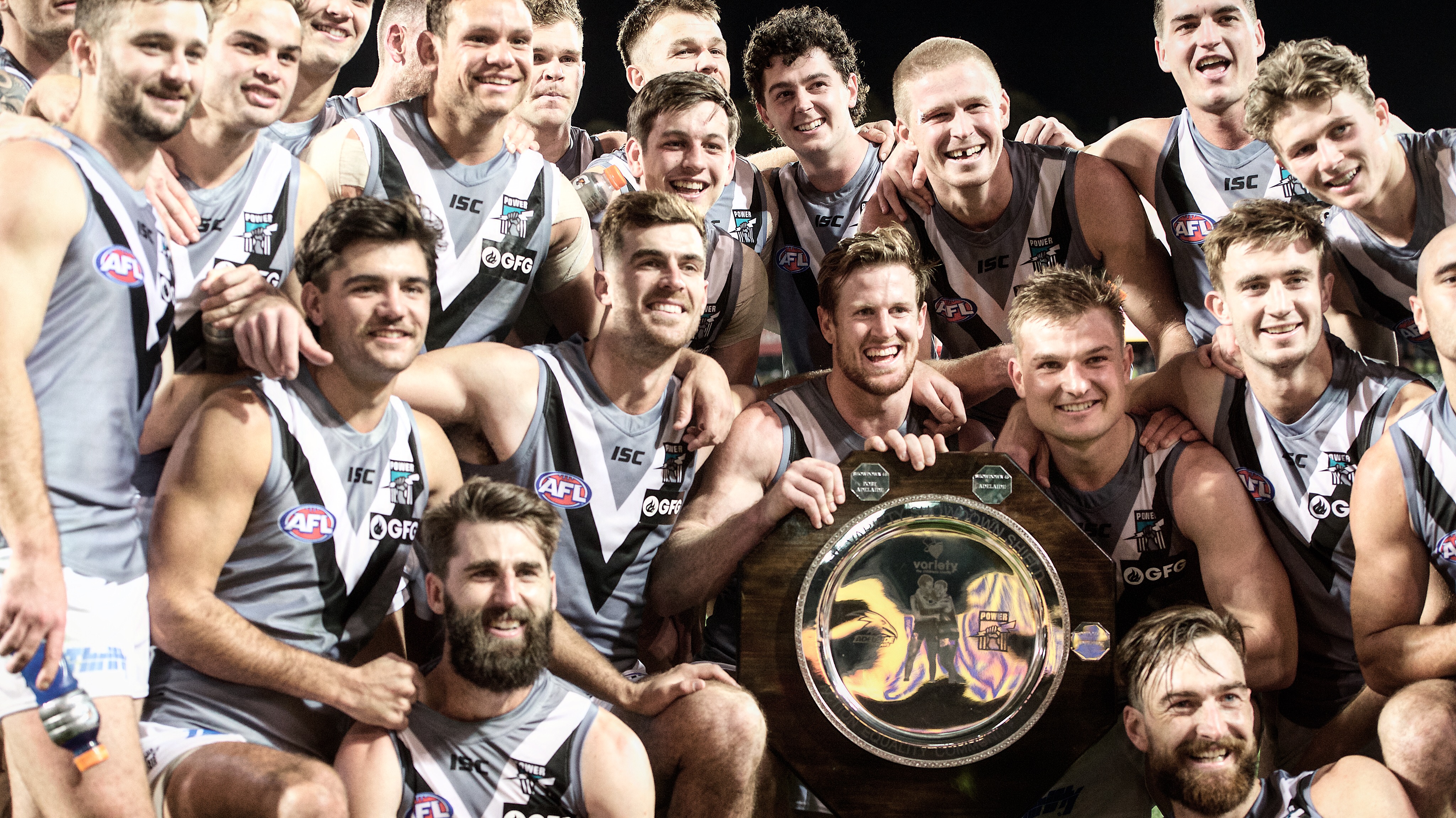 Apart from when it ends like this, of course… Photo: Michael Errey / InDaily

I’ve been to almost every home and most away Showdowns in recent years, and after a while they tend to blur into a mess of snapshot memories, for better or worse.

The ones that stand out, though, are the ones I didn’t actually attend.

The come-from-behind win against Port in 2000, for instance, where we listened despondently to the first half in the kitchen of the Hyde Park restaurant I was working in at the time, before I drove home at shift’s end to pace the living room as we stormed home in the last.

The only other Showdown I’ve missed altogether was for a 2010 wedding for a friend (of my wife’s), when I was reduced to checking score updates on my phone at discreet stages of the ceremony, and it seemed that every time I refreshed the score Robbie Gray had kicked another goal.

So that schedule clash was probably serendipity as well.

Neutral games, too, become ingrained in the memory because they’re inextricably linked to a certain time and place.

Ten years ago, for instance, the round just gone featured that immortal game between Geelong and St Kilda, both without a loss for the season to that point.

The Saints prevailed by a goal in a classic, and only lost two games by a combined seven points for the rest of the season en route to another failed Grand Final, a re-match with Geelong that flipped the home and away result on its head.

My abiding memory of that game, though, is that I watched it with some mates at The Alma, and some pints in I got a call from Isobel Redmond to tell me she’d be standing for the Liberal leadership.

Which is apt, really, because the subsequent state election turned out much the same for her as the Grand Final did for St Kilda. Both scored more than their opponent, but not where it counted. 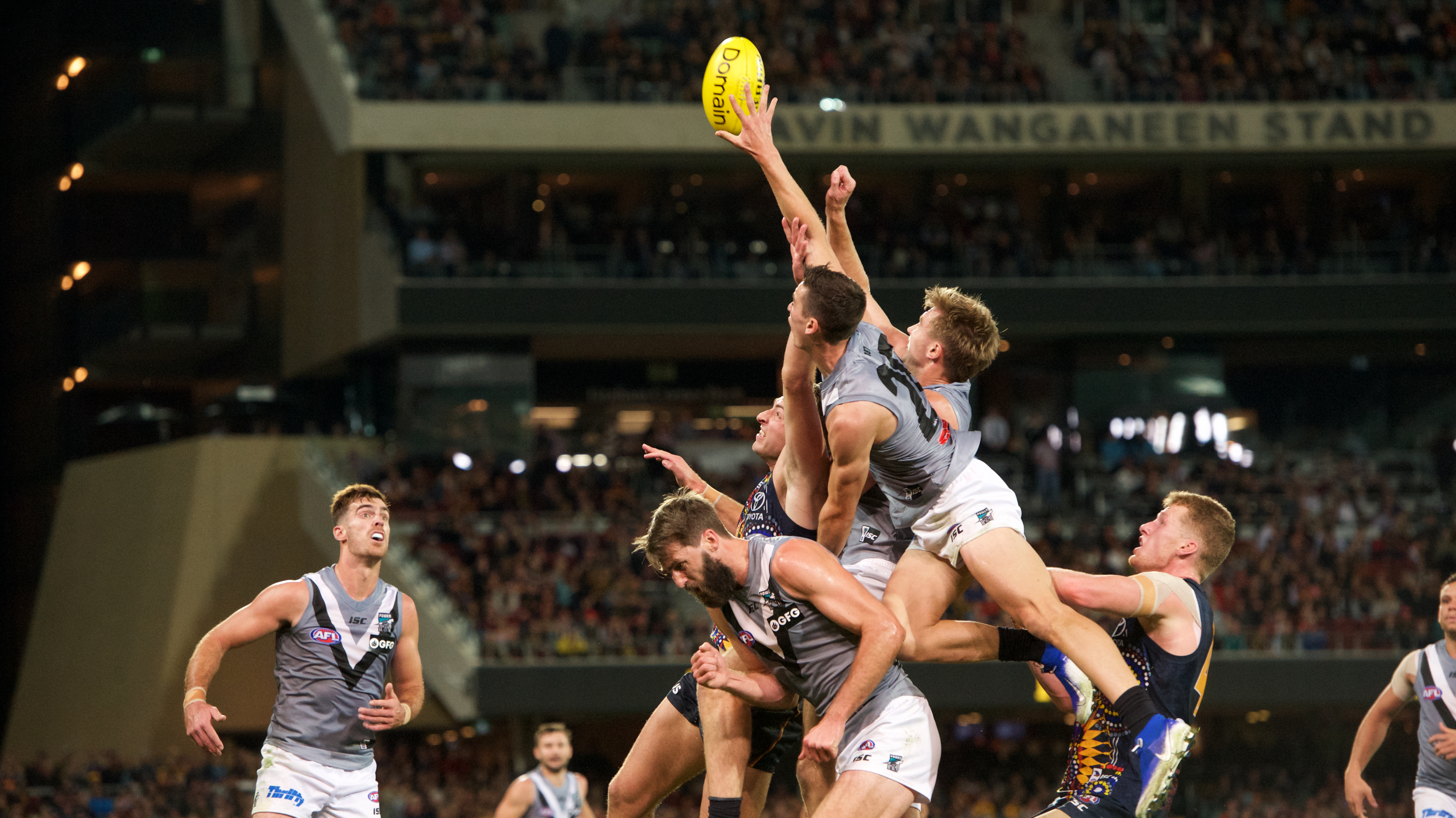 The Saints’ misery was compounded a year (and one week) later, in what was the only Grand Final of my adult life that I didn’t actually watch.

Instead, I was at a mate’s buck’s day (to be fair, he’d scheduled it for the week after the Grand Final but was cruelled by the infamous draw).

And as it happens, it was also the only Collingwood flag of my adult life, so in hindsight it was actually quite a relief not to have to sit through it.

And as serendipity would have it, the bulk of that buck’s day was spent at the very same winery at which I spent much of the Saturday just gone sulking while hunched over the AFL app on my iPhone screen.

So in the spirit of serendipity, there is some good news in all of this, at least for this one jaded steward of Adelaide Football Club’s post-millennial paucity.

And that is that the next round of 40th birthday celebrations on Grand Final weekend for that friend (OF. MY. WIFE.) won’t be too much of an impost after all.

Because while there’s plenty we simply can’t work out about our enduringly frustrating team, there’s one thing of which we can be certain: whoever’s playing that day, it won’t be the Crows.