Other times, you have to wait until the dying seconds of the final match of the round to really write the whole thing off.

And then, of course, you can have weekends like the one just gone. 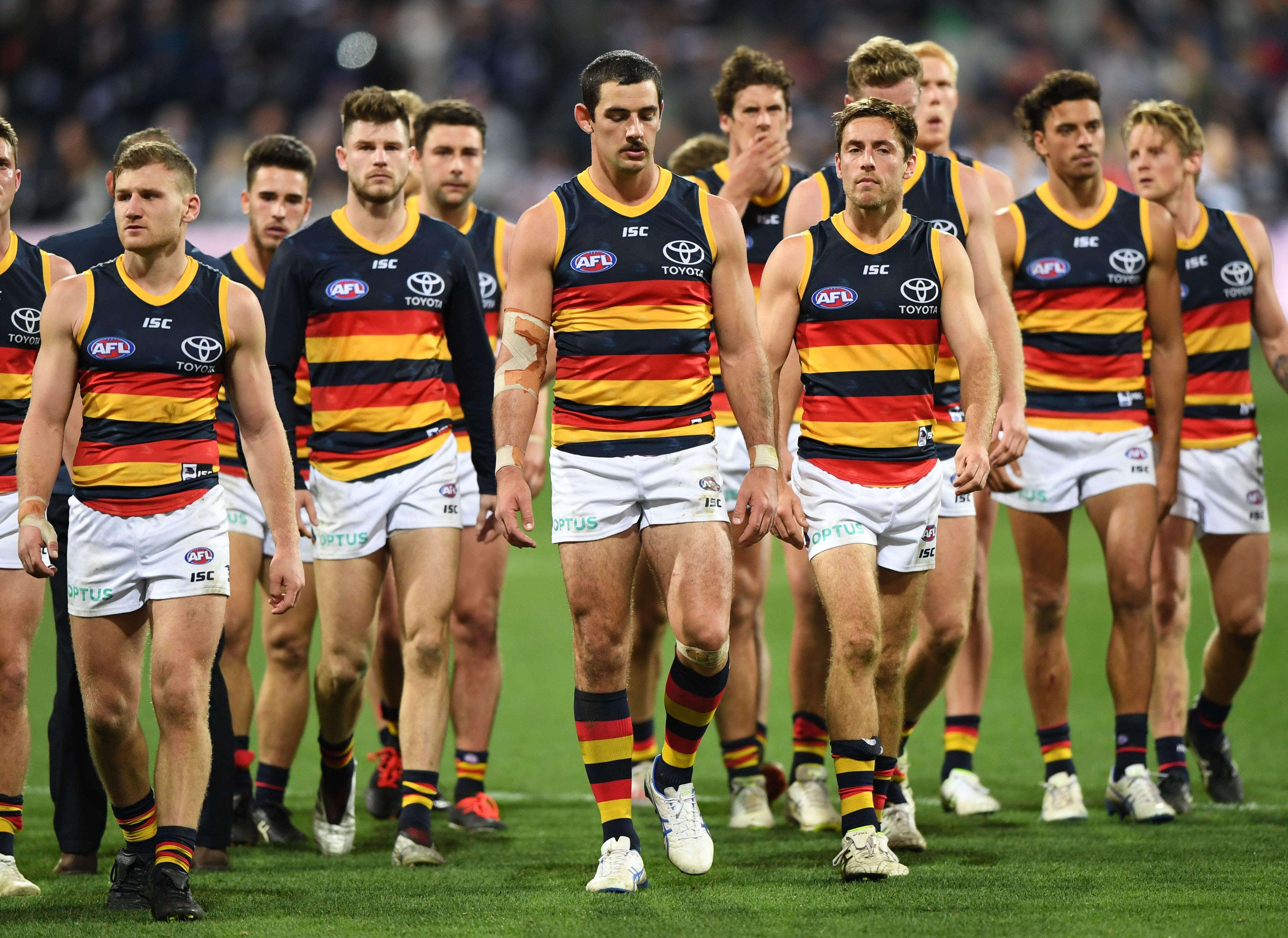 Things started bad on Friday (above) and ended worse on Sunday (below). Photos via AAP 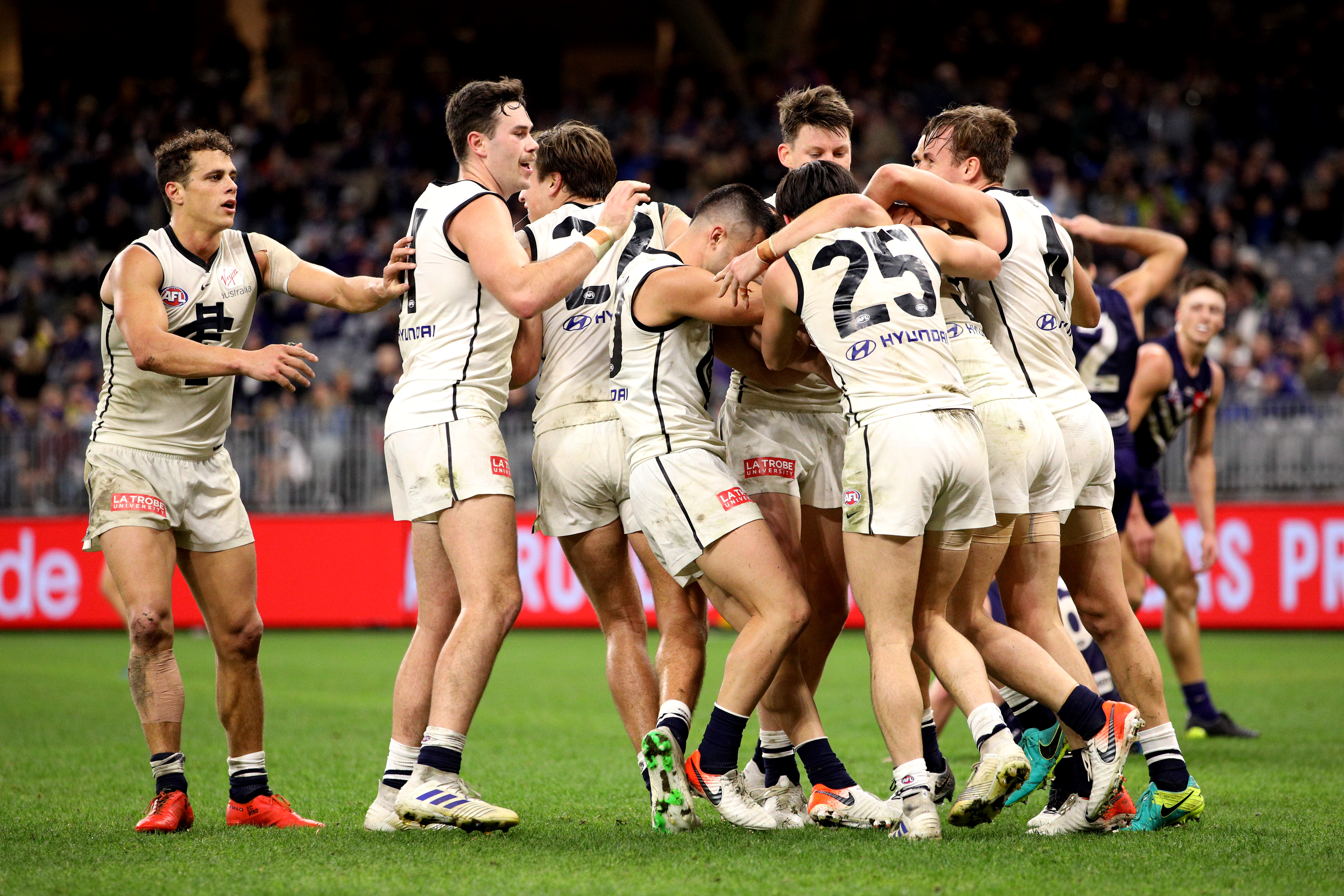 We’ve reached that inevitable turning point of the season from which near-on every game has some bearing on our fortunes – doubly so this year, given our fortunes hinge on the relative competence (or lack thereof) of both Adelaide and Carlton.

Thus, I now have an opinion about every game.

And yes, in a standard season, it would be good that Freo lost, for both reasons enunciated above.

But in the Bizarro World of 2019, the Dockers’ hapless home collapse has likely cost us football’s ultimate (consolation) prize. 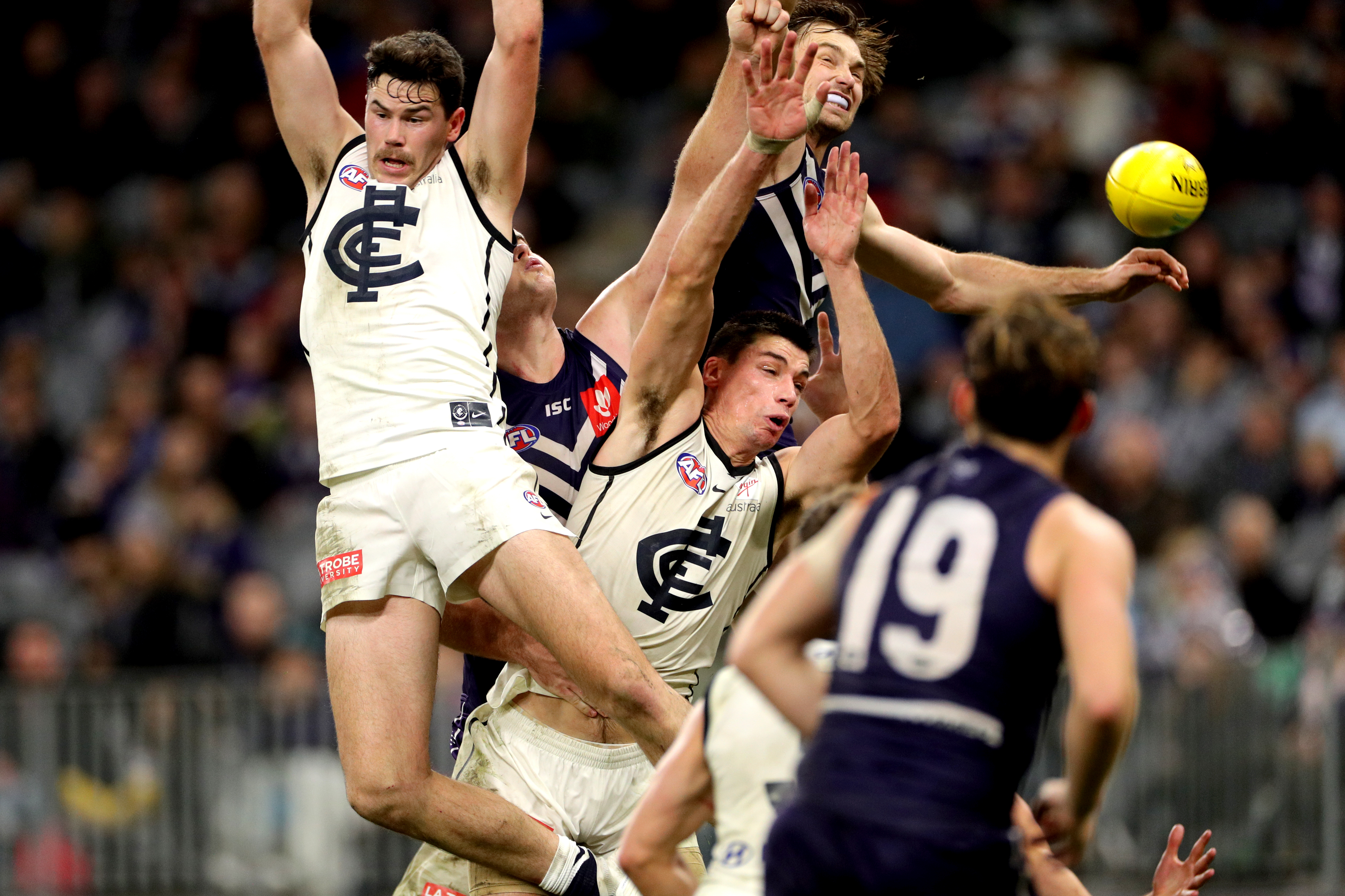 Despite McGovern’s best efforts to avoid the ball, he managed to kick a handy goal in the Blues’ win. Photo: Richard Wainwright / AAP

While the Blues have only been anchored to the bottom of the ladder since Round Eight, they’ve looked eminently capable of delivering us a Number One Draft pick via last year’s first round pick trade since at least Round Four, when they coughed up the lead to Gold Coast with mere seconds left on the clock.

But last night, as Round 15 drew to its grim conclusion, Carlton hauled themselves off the proverbial canvas – and the actual bottom of the ladder – when Freo coughed up the lead with mere seconds left on the clock.

And like that, our Number One draft pick was gone.

I was only keeping half an eye on proceedings until the final minutes, always confident the Dockers at home wouldn’t be silly enough to let a visiting Carlton get a run-on. The Blues were, after all, missing co-captain Patrick Cripps, the guy who is usually responsible whenever anything good happens at Carlton, as well as forwards Harry McKay and Charlie Curnow, who went down early as Freo skipped to a five-goal lead.

But, in an ominous repeat of that Brisbane debacle a few weeks back, the Blues rallied in the second, held firm in the third and surged in the last – hitting the lead and losing it again before former skipper Marc Murphy kicked truly with 31 seconds on the clock, somewhat destroying my Sunday evening mood.

Don’t get me wrong. Generally, when you don’t have a vested interest in a match’s outcome, the best for which a casual observer can hope is that something unlikely happens.

That a team given no hope somehow conjures an unlikely victory.

The propensity for this to occur fairly regularly is, indeed, one of the better aspects of the Australian game.

The Bombers sneaking over the top of GWS? I can live with it.

But of all the unlikely boilovers to occur, this was the one I really, truly didn’t want to see.

It’s one of those regular instances where ‘football was the winner’, but we were the loser. Oh, and Freo, although that’s by the by. 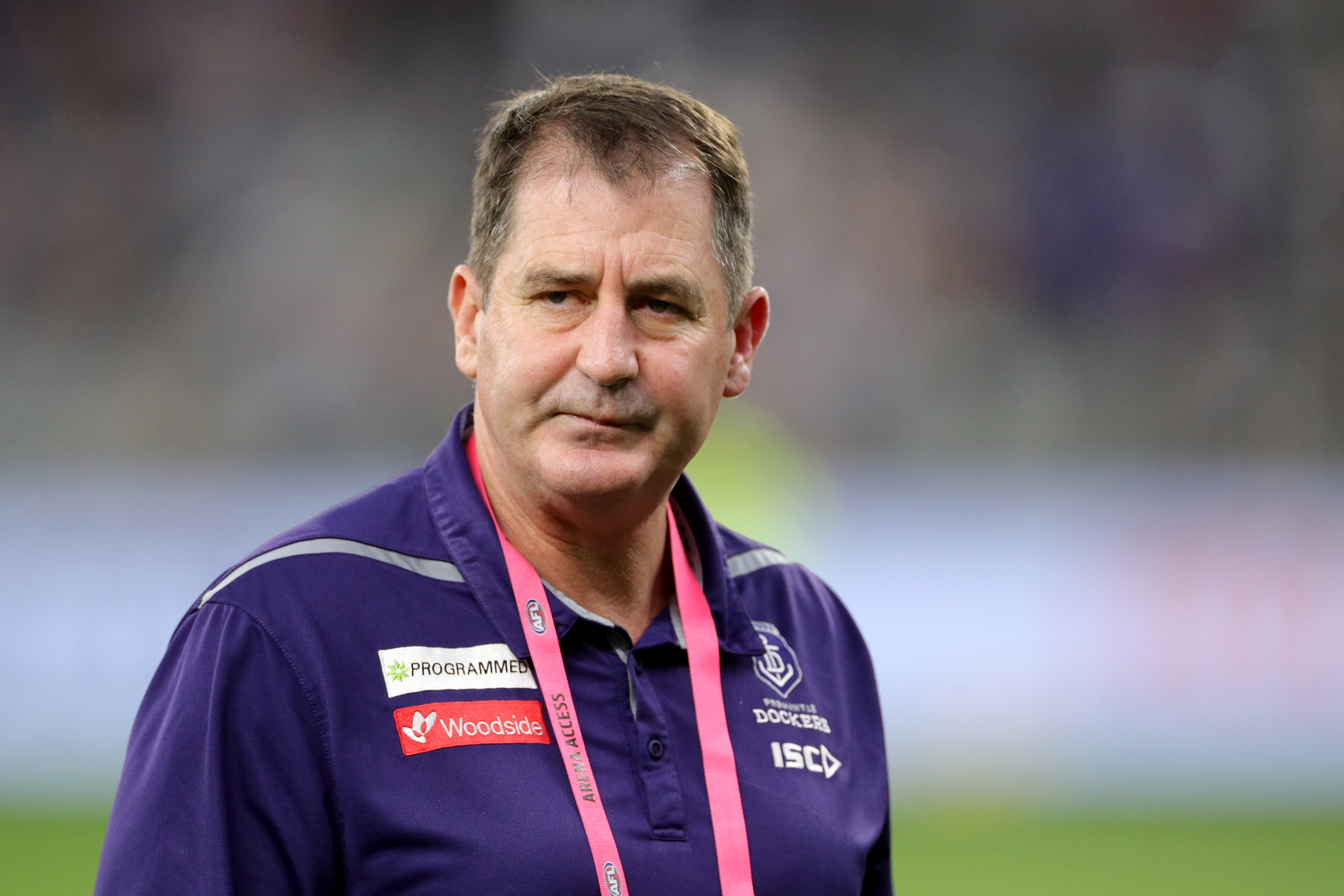 Thanks for nothing, Ross! Photo: Richard Wainwright / AAP

But it was made far worse because I was indeed hoping for an unlikely boilover on the weekend. Indeed, perhaps the least likely, given Carlton had already won twice this year before yesterday’s theatrics, whereas Adelaide haven’t walked off the field in triumph at Kardinia Park for 16 years.

The stadium itself has had about four name changes in that time, but our appalling form there has been remarkably durable.

Oddly enough, before we began our 11-games-and-counting streak of losing away to Geelong, we had a bit of a purple patch there, winning big in ’98, a narrow loss in 2000 before two tight victories – the first of which, a three-point nailbiter against a young Cats outfit coming off seven successive wins, remains one of our better home and away successes.

We won despite kicking 18 scoring shots to the Cats’ 30, with Ricciuto kicking five goals – including three in the back half of the final quarter – and Gary Ayres giving a friendly reverse-salute to some old fella heckling in front of the coaches’ box.

I was at that 2002 game, and it’s probably my best memory of Ayres as coach (with the possible exception of that time he did a ‘Damien Hardwick at Adelaide Oval’ with a Melbourne supporter after our comeback win in that weird-but-epic semi-final later the same year).

Afterwards, my mate and I hit the highway back to Canberra after a weekend’s road trip to Melbourne, only to break down in the middle of nowhere about midnight and spend the rest of the evening huddled in my freezing Camry station wagon under bundles of clothes, being intermittently awoken by the mooing of curious cows across the roadside fence to one side and B-doubles passing in the pitch darkness on the other.

The next morning, we walked through the fog to a nearby farm to call the NRMA (yes, it’s been so long since we won in Geelong that ubiquitous mobile phones weren’t even a thing yet!) giving a vague explanation of where my lone car could be located, before I sheepishly called the supervisor at my public service job to explain that I couldn’t make it to work because my football road trip had gone amiss but at least we won by three points right?

But I think it’s fair to say that, 16 years on, the novelty of that delightful Geelong misadventure has just about worn off. 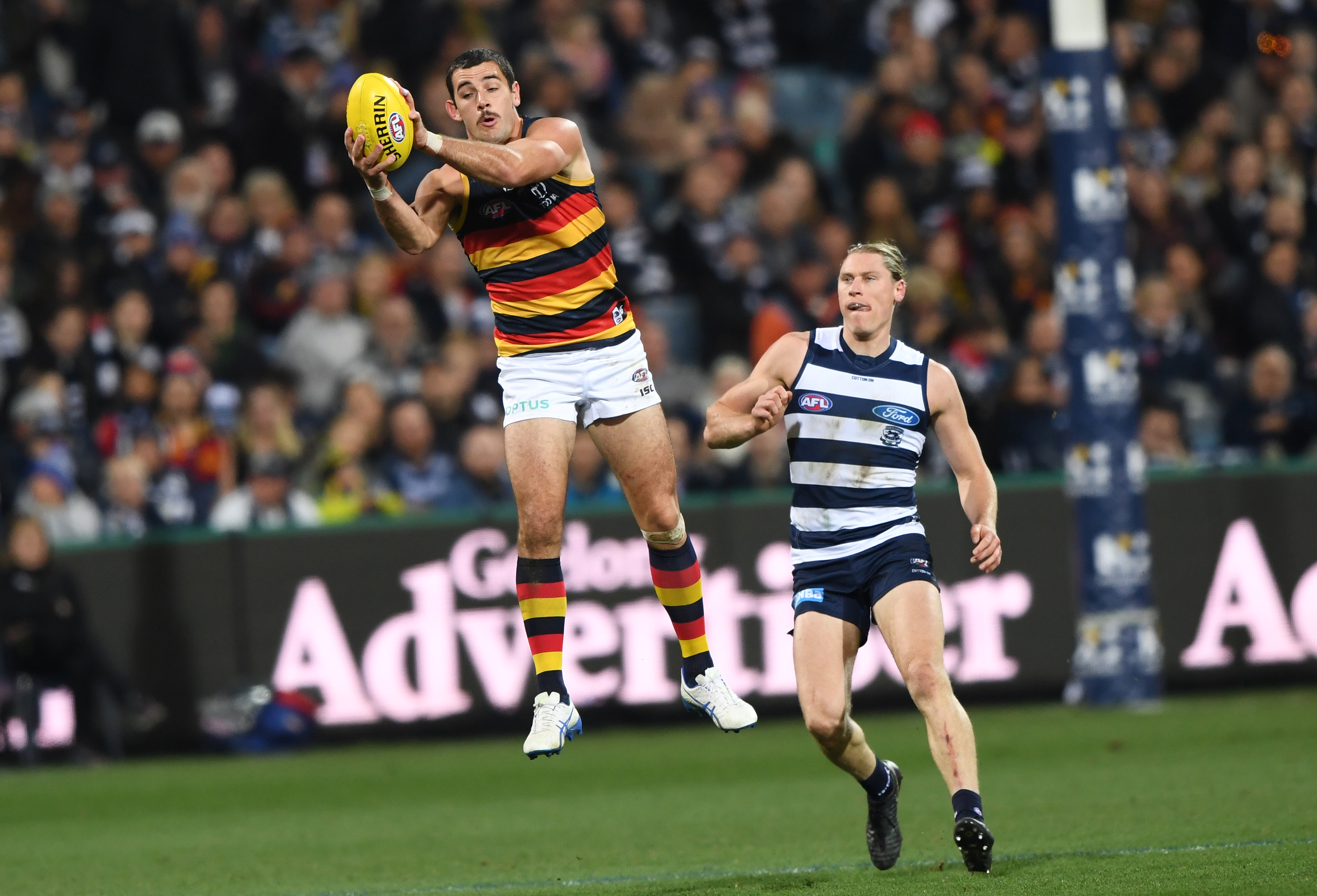 Friday night started off well enough, with the Crows building a 20-point lead by halfway through the second term. But unfortunately, the defining tenet of the Cats’ game in 2019 is their ability to score about four goals in the time it takes you to go to the bar and back, and sure enough, we went into the long break a point down and never recovered the lead.

For some reason, someone thought it was a great idea for the neon billboards along the oval’s fenceline to regularly display an ad for a movie about a spooky haunted doll that gruesomely kills people, which I’d imagine is an odd peripheral image when you’re lining up to kick a goal, and might explain why we opted to do it so infrequently.

Still, it was apt nonetheless, because our night quickly became yet another sequel in the litany of horror shows we’ve endured at the Cats’ homeground.

Moreover, the match continued the curious case of Bryce Gibbs, the high-priced recruit for whom we parted with a pair of first-round picks without evidently ever having watched him play for the preceding 11 years.

And then repeatedly dropped for playing much as he had for the preceding 11 years.

Perhaps someone at the Crows has decided that Gibbs, as a new draftee last year, wasn’t suitably demoralised by our famous pre-season Gold Coast junket, and wants to make sure he doesn’t miss out on the season of broken-spirited apprehension that the rest of the squad enjoyed in 2018. 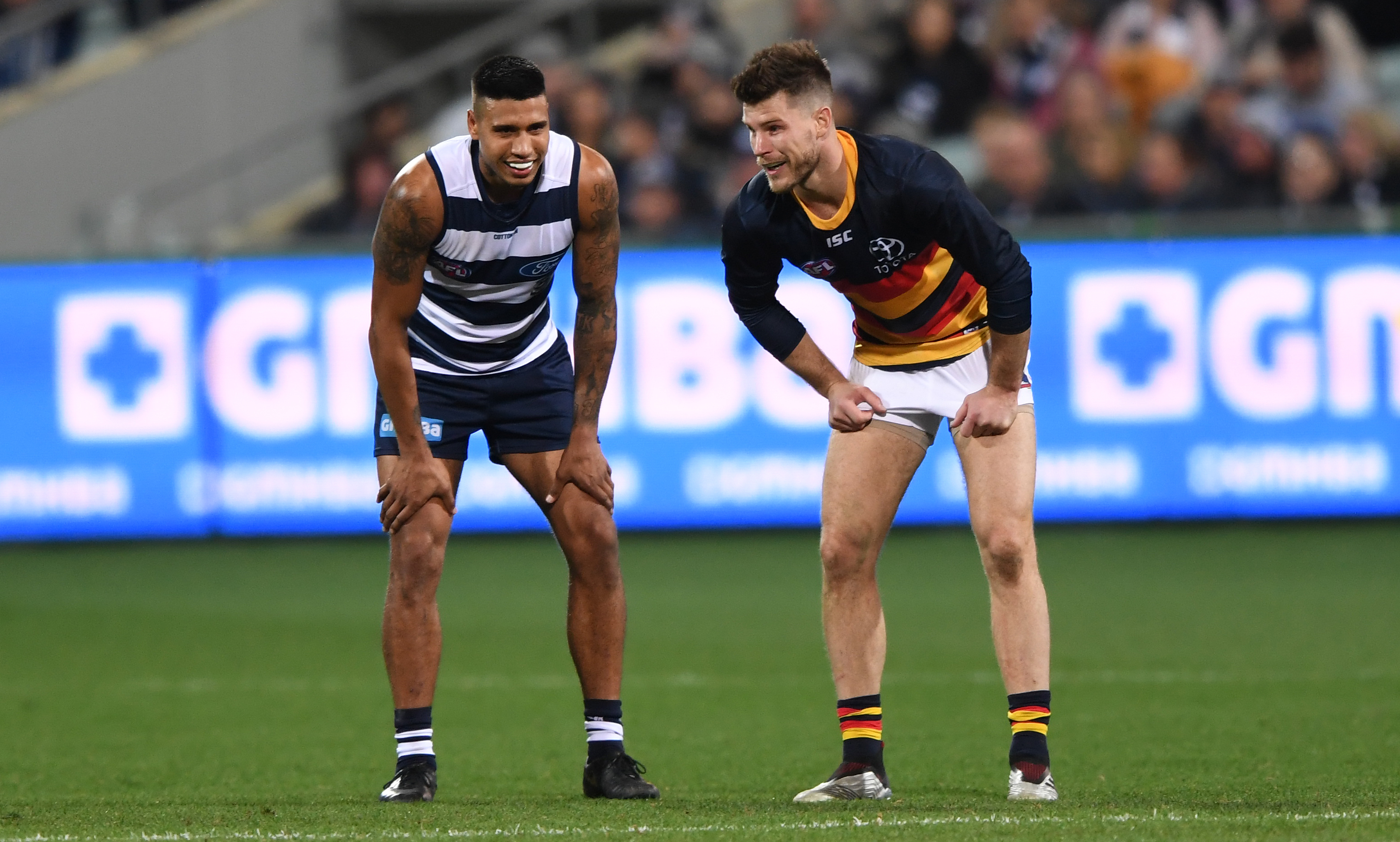 The Bryce is not right. Photo: Julian Smith / AAP

At any rate, we thus entered the weekend proper requiring other results to go our way to avoid a significant slide down the ladder.

And frustratingly, the weekend kept throwing up the tantalising possibility of random boilovers, before normal service maddeningly resumed.

The fairly average Hawthorn, for instance, looked like causing an upset against West Coast – which would have kept us within a win of usurping the Eagles on the table – before losing by the margin of the final goal they conceded.

The Hawks will at least welcome back their out-of-favour captain Ben Stratton for Friday’s matchup with Collingwood, having not won a game in the two weeks he’s been out suspended. Which at least saved them from one conundrum in the meantime:

But by the time the Suns hoisted the white flag after a bright start against Sydney, it appeared the only Good Thing that was likely to happen in Round 15 was Port supporters having to go out in the diabolical weather to see their team’s inevitable victory against the lowly Bulldogs. 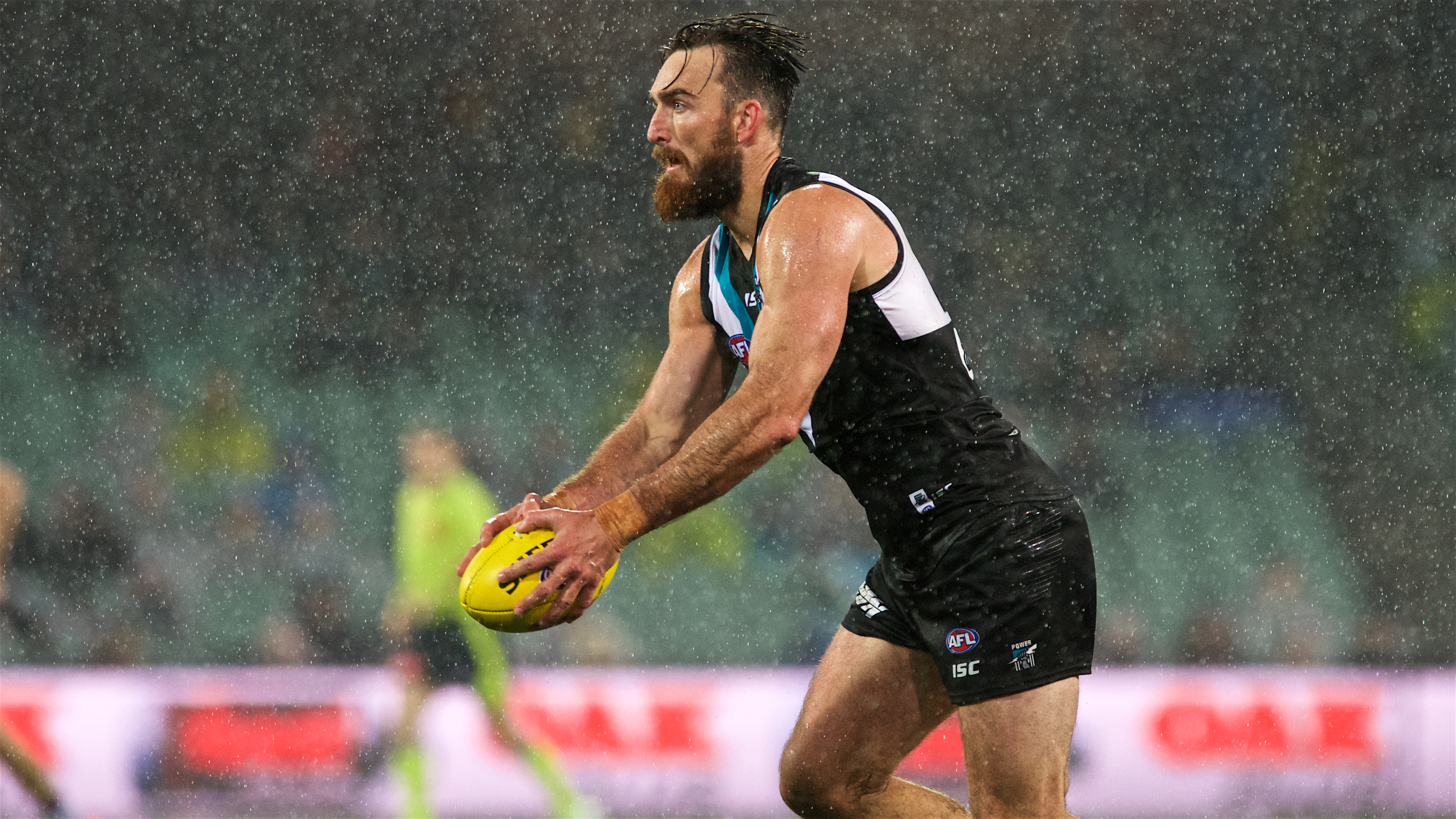 Fortunately, the Power are evidently vying for the ‘season’s most frustrating team’ award, which is perversely enjoyable if you don’t happen to support them.

With the same number of scoring shots as the Dogs, they still somehow managed to lose by 25, and would no doubt be kicking themselves for letting such an opportunity slip (although they’d probably miss).

In the end, the only downside was that a mere 25,623 of the Port faithful braved the freezing sleet to witness their team’s increasing ineptitude.

Although it’s still nice to think that both the team and its supporters were being given a proverbial bath at the same time. 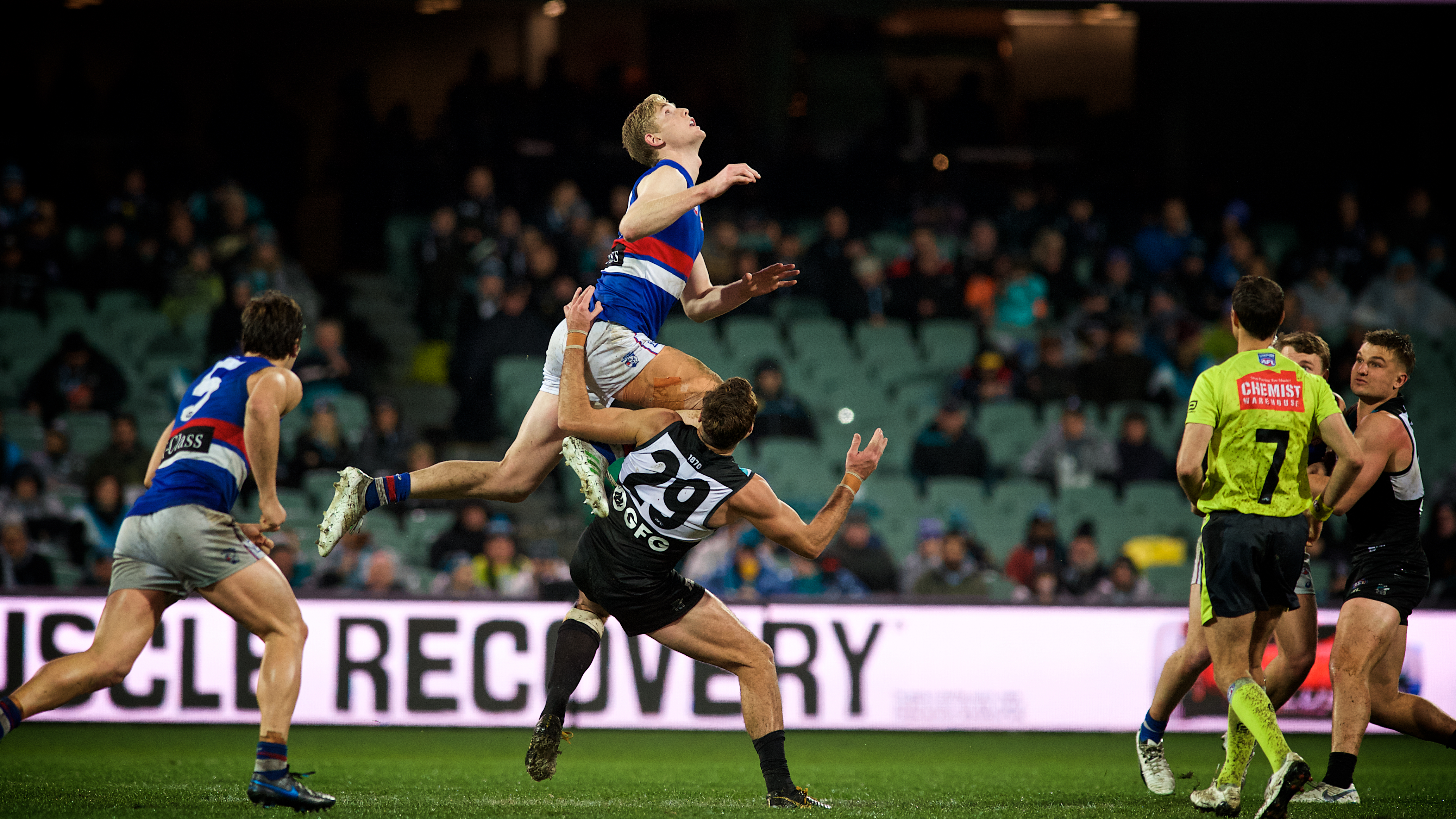 I was actually out to dinner in a nice warm restaurant while all this was going on, and only realised the extent of the blowout when I surreptitiously checked my phone at a discreet interval:

If it weren’t for Carlton ruining everything at the death, this one moment of football schadenfreude perfection would have almost been consolation enough for our own incompetence.

For the Power are now akin to the Yo-yo Crows of 2014, their formline this year almost poetic in its rhythmic cadence:

Although, I think you can see my problem here… 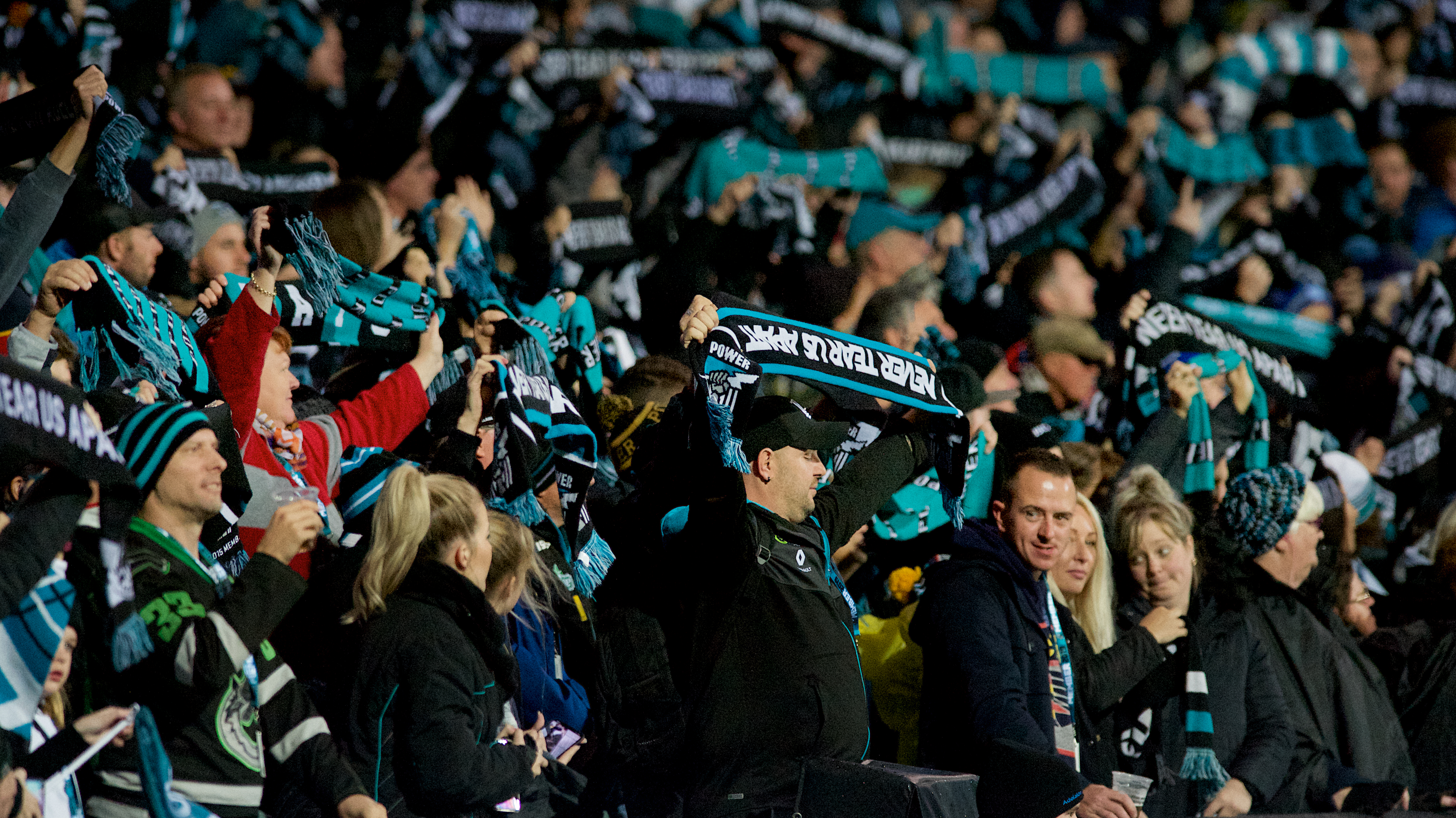 Hopefully, like this gentleman’s scarf, we can turn Port’s hopes of victory upside down this weekend. Photo: Michael Errey / InDaily

Yep, this week we take on the Power, in a round in which their season’s pulse dictates they’re due for a win.

At least, though, if nothing else the weekend has reminded us that just occasionally in football, things don’t always go the way they’re supposed to.