Thus, on a casual view of things, you’d rightly expect I don’t have much to complain about in the washup of the weekend gone.

And you would, of course, be wrong.

I have, in fact, got a long list of grievances, which I will generously document for you in the paragraphs below.

But it would be unduly churlish of me not to first concede that more things have gone right for us than wrong in the preceding days, and that this is a Good Thing. 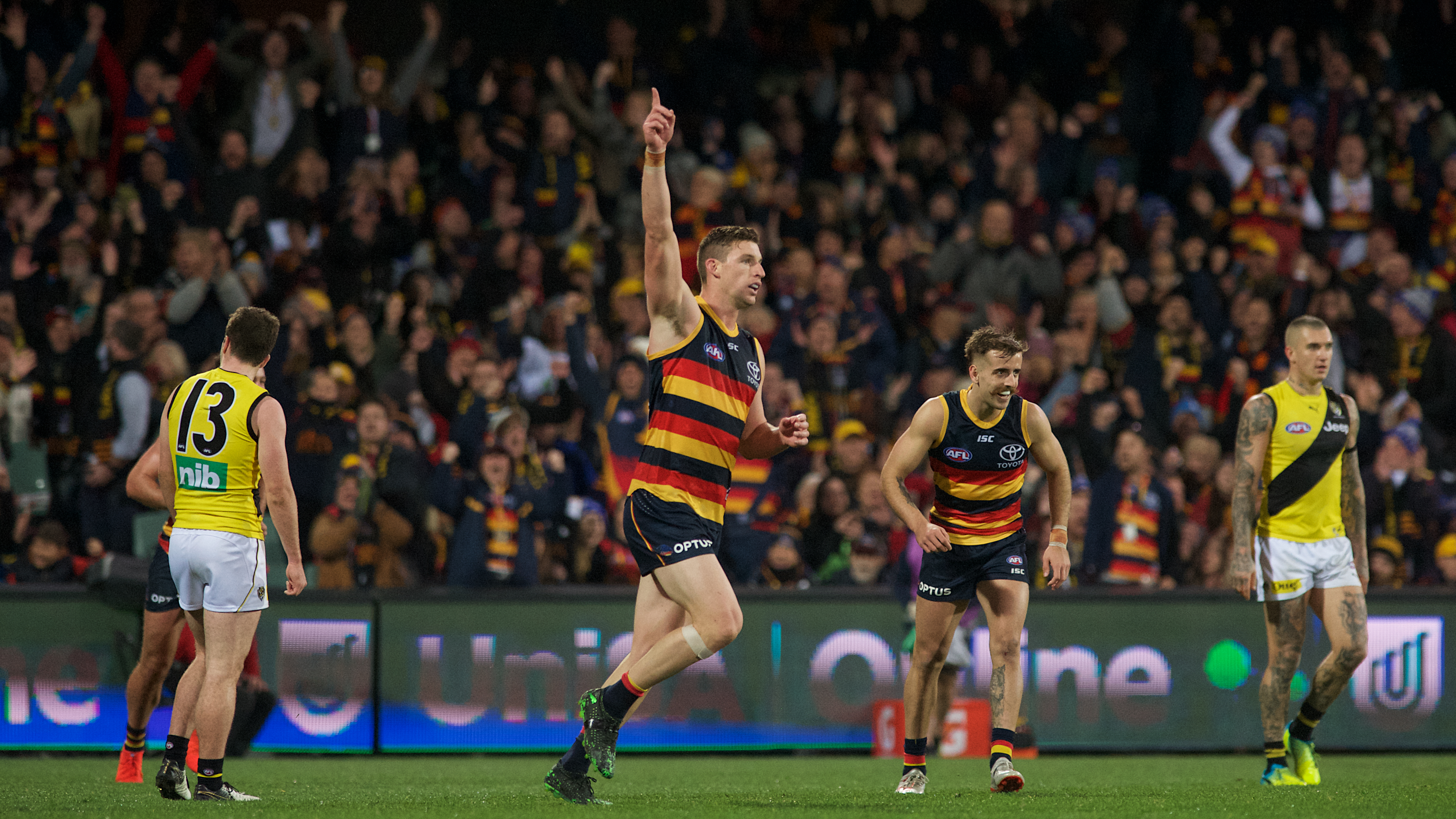 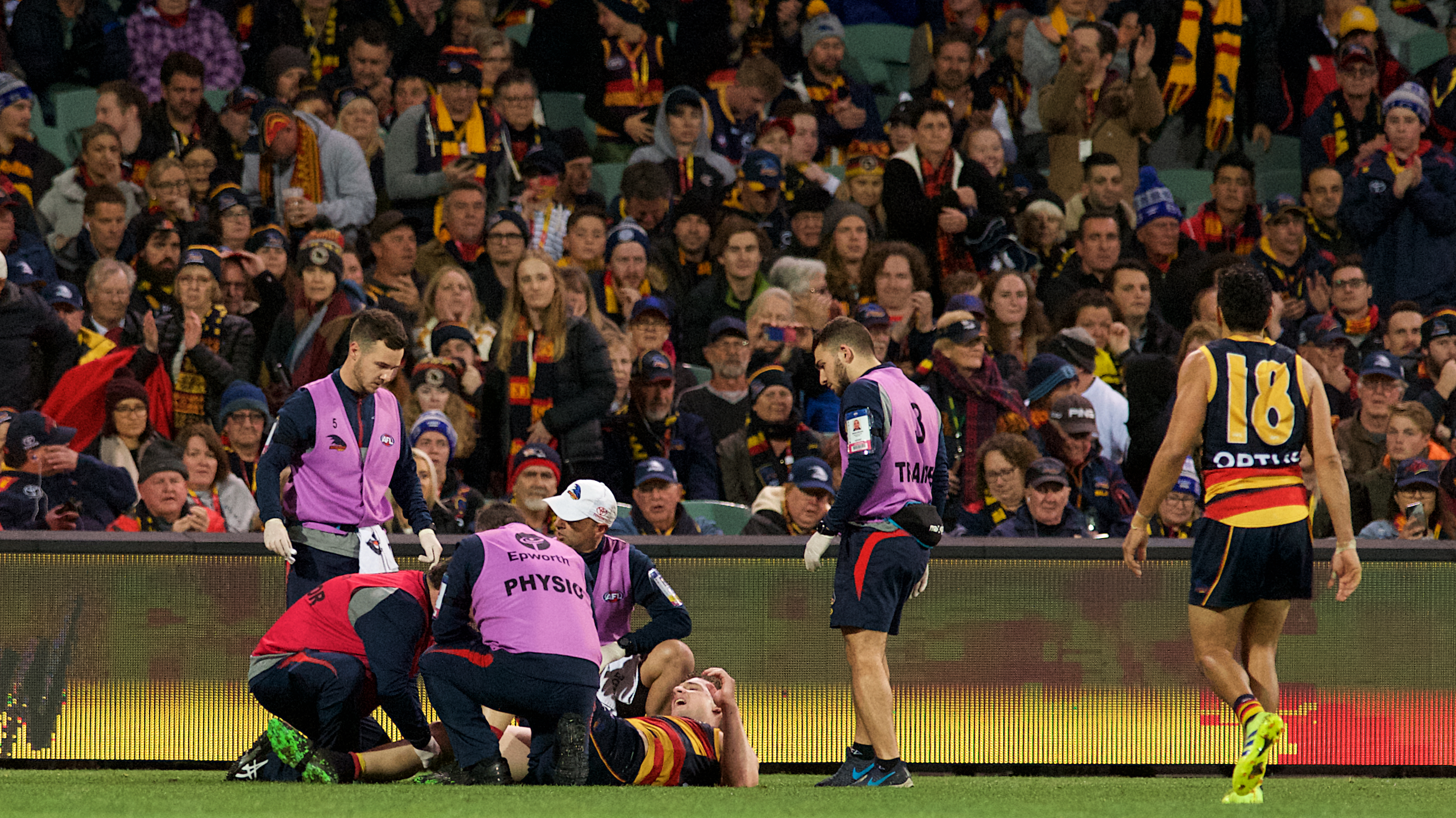 Indeed, if you were to tell me at the season’s outset – even before that nausea-inducing 1-3 start – that we’d be heading into the mid-year bye perched in the top four while simultaneously having one hand tenuously grasped on the league’s number one draft pick, I’d have taken it with gratitude.

And if you’d further told me that at the same moment Port were to slip from the eight ahead of a home duel with the ladder-leaders, while we go into a week off having just accounted for the hated Richmond… well, you could have just gone right ahead and appointed me Secretary of Partying Down.

Yes, all things being equal, this has been what Normal People would regard as a solid week.

And because we all know I’m gonna find something to complain about eventually here, let me start by pointing out the lone, wholly unsatisfactory positive in our September 2017 loss to the Tigers, which we will hereafter refer to as ‘The Bad Day’.

For, while it will never, even slightly, provide any consolation for The Bad Day, I will always and forever be far happier beating Richmond now than I would have been two years ago.

And that’s nothing to be sniffed at. 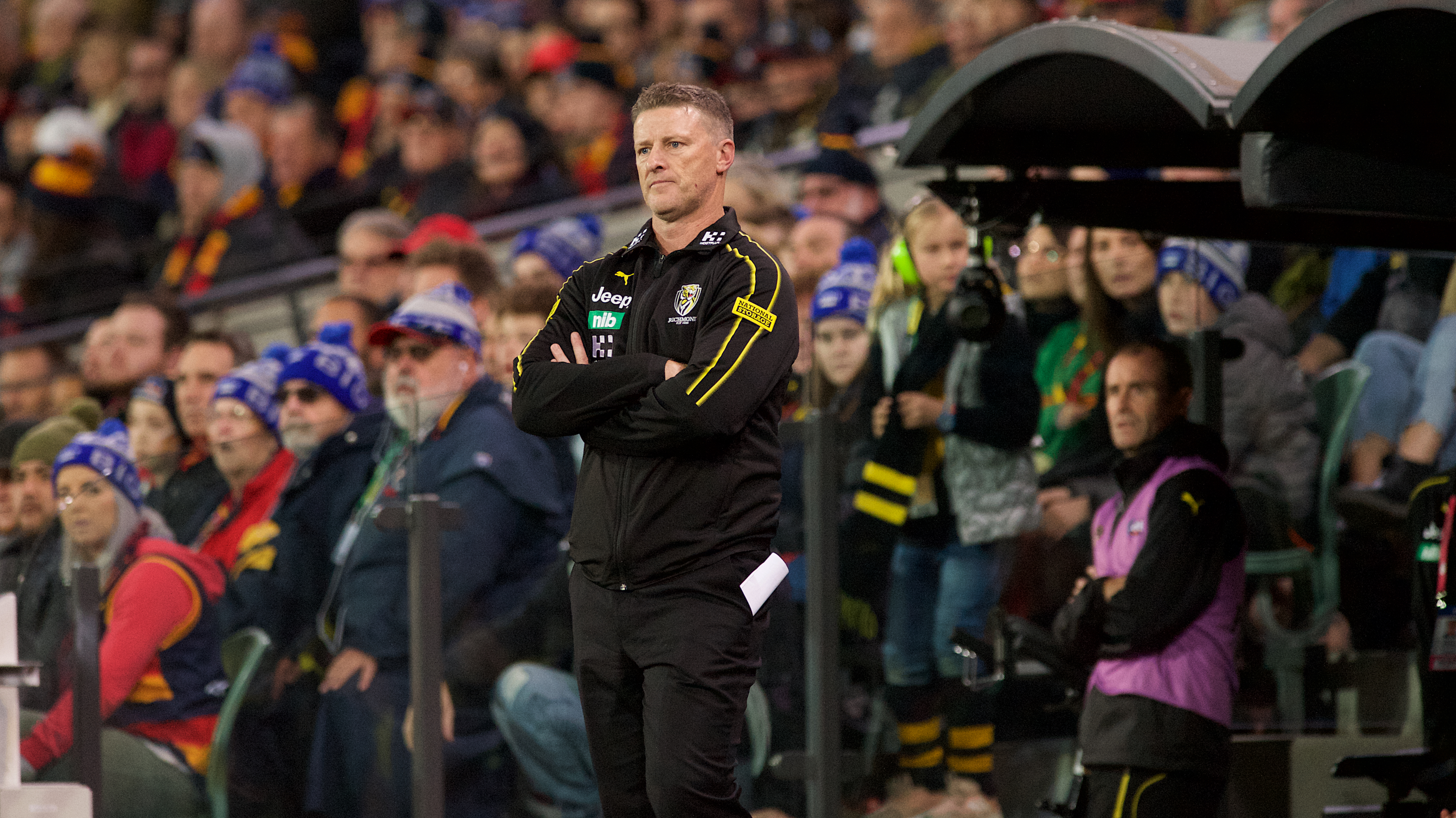 A sight that wouldn’t have been quite as sweet once upon a time. Photo: Michael Errey / InDaily

There are teams against which I’ve cultivated vendettas for years – decades even – but along came the perpetually comically-hapless Tigers and in one fell swoop provided me with a lifelong grudge.

And thus, even though it was at home, and against a veritable Richmond reserves side, this was a big, important win.

And yet. The Tigers began so almost-farcically afflicted by injury that just showing up at all appeared a minor miracle.

Captain Cotchin’s mid-week withdrawal confirmed that their entire leadership group, including Rance and Riewoldt, would be a no-show. Hours later their stand-in captain Shane Edwards became a further late out.

Besides new stand-in captain Dustin Martin, who had himself been considered long odds to play anyway after a corkie the previous week, about the only marquee player not injured was Tom Lynch.

Unlike the Crows, who besides poor old Doedee – the first of our spate of men’s ACLs this year, and the only one that ended up actually being an ACL – only had one other player on the injury list: ironically, also Tom Lynch.

Yes, our own lack of injury woes was making a mockery of the fact it was only this time last year that everyone wanted Adelaide’s fitness guy sacked.

And having been given almost no chance whatsoever against GWS the previous round, the fact that this week the only question appeared to revolve around the magnitude of the Crows’ victory pointed to one inevitable eventuality…

That this could well become the worst loss in Adelaide Football Club history.

Things then quickly reached ‘Peak Adelaide’ when second-gamer Mabior Chol immediately kicked the first goal of the game – and the first of three in succession by the visiting Tigers.

And, of course, it was about this point that the Crows players started to go down.

The good news was that, after half a season of commentators lamenting his lack of physical aggression, Tex finally threw his body into a player. The bad news was that it was one of ours – Lachie Murphy, who consequently left the ground early in the game a few teeth the lighter and played no further part. 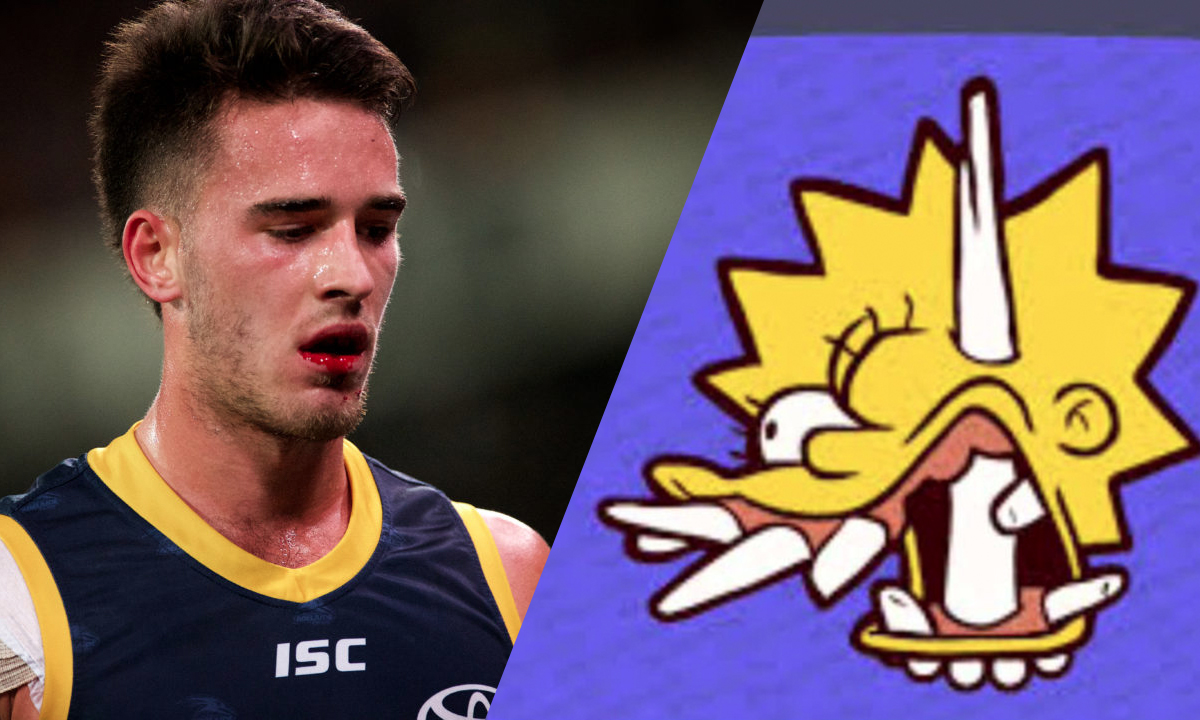 As the night progressed, two more Adelaide players, Talia and Kelly, were iced up, before Josh Jenkins – who, for the second time in as many years, had hit his straps against the Tigers at home – buggered his knee as he hacked the ball out of the air in the dying seconds of the game on the forward half wing, right in front of me.

You’ll be pleased to know that I responded to this turn of events in a calm, measured, sensible and, above all, considered way.

A fucking ACL with the second last kick of the game. Fuck this shit.

Happily, if you took out the incorrect parts of that statement, you’d only be left with the swear words, because a) it wasn’t the second-last kick of the game and, even more importantly, b) it wasn’t an ACL.

Still, it ensured the match ended on a peculiarly sombre note. Perhaps it was appropriate for a game that, while it happily wasn’t the worst loss in Adelaide Football Club history, frequently loomed as being among our worst wins.

That it didn’t turn out to be either was largely down to yet another final quarter flourish, capped off by yet another junk-time moment of magic from Eddie Betts. 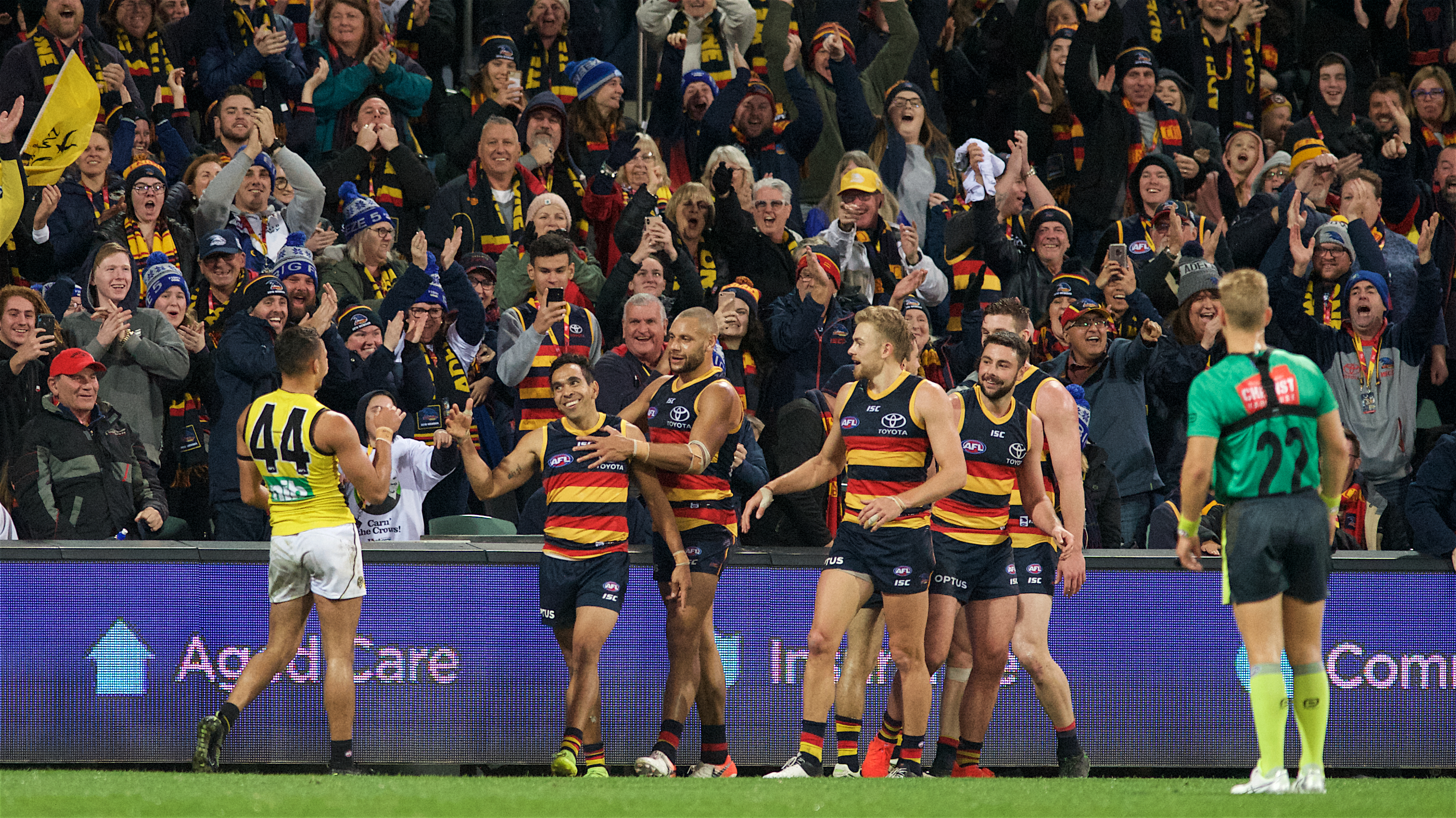 Having duly won against a hobbled opponent on the Thursday (and made quite tough work of it, if we’re honest), the bye-curtailed round then centred around a trio of matches in quick succession across Saturday.

In a nutshell, we required the Suns to prevail over the vulnerable Saints to put valuable distance between themselves and the Blues at the foot of the ladder.

We required the Blues to duly lose to the Bulldogs, for much the same reason.

And we required Port to collapse against Freo, because they’re Port and we hate them. 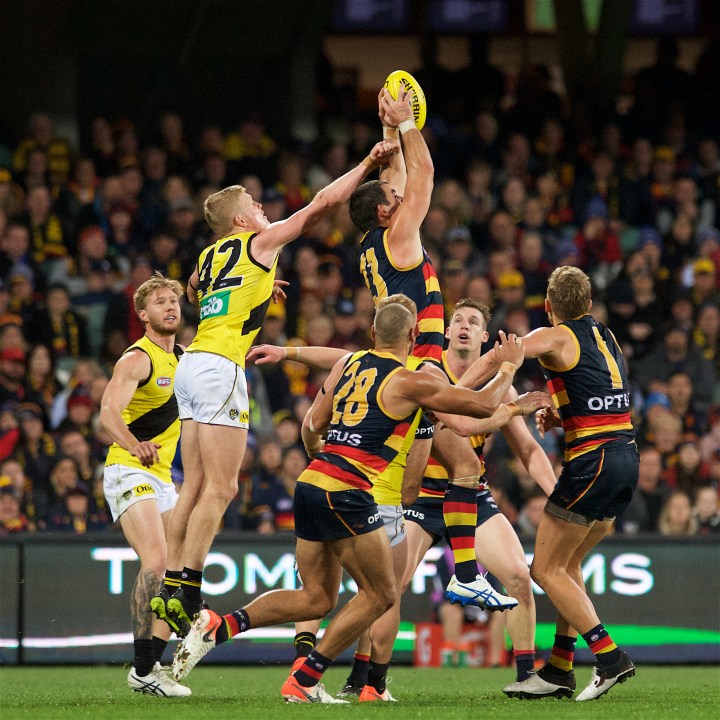 Tex took a strong forward grab, in a sign it was going to be one of those weekends. Photo: Michael Errey / InDaily

Things looked encouraging early when the Suns skipped to a five-goal lead in the second half but, being the Suns, they capitulated to lose by four points, which is apparently in accordance with their club charter.

So, from an encouraging start, things had taken rather a grim turn when Port got an early break on the Dockers in Perth and, after a tight tussle thereafter, hit a one-point lead at the final change.

Having hit the front however, the Power failed to score altogether in the last term, as the Dockers ran rampage to win by 21.

This, of course, is also in accordance with Port’s club charter: to get on top and then stop, stop, stop. 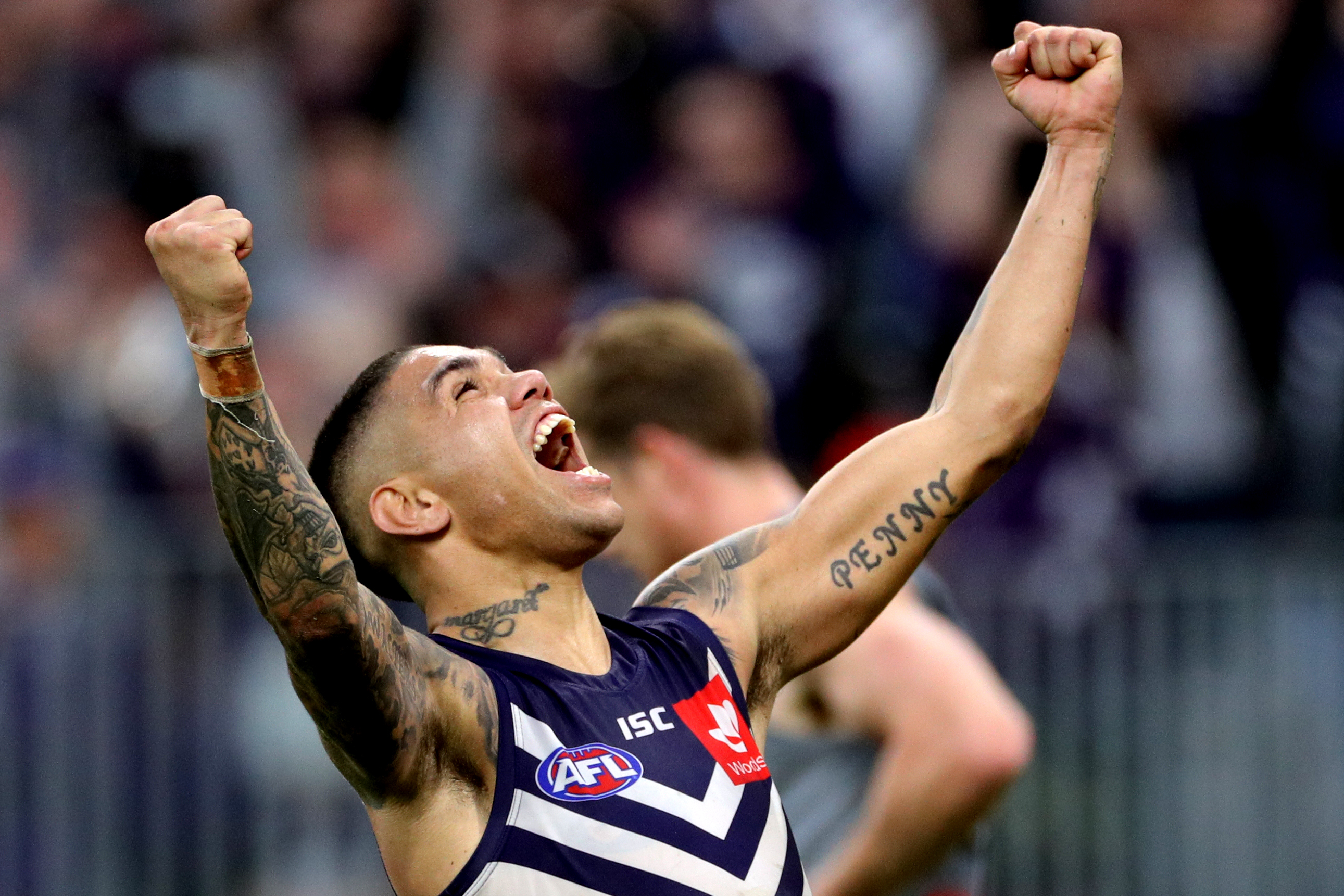 Michael Walters, summing up the thoughts of Crows supporters on the weekend. Photo: Richard Wainwright / AAP

By the third game it appeared the whole day was just the Footy Gods playing one big practical joke at the expense of Crows supporters: twice, the Bulldogs built a big lead, only for Carlton to twice reel it in in the blink of an eye.

The good news for Blues fans is that, having not cracked the 100-point barrier since 2016, their team has now managed it twice in a single season, both times against the Bulldogs.

The good news for us is that they still lost.

But it’s hard to see them losing every week from here. 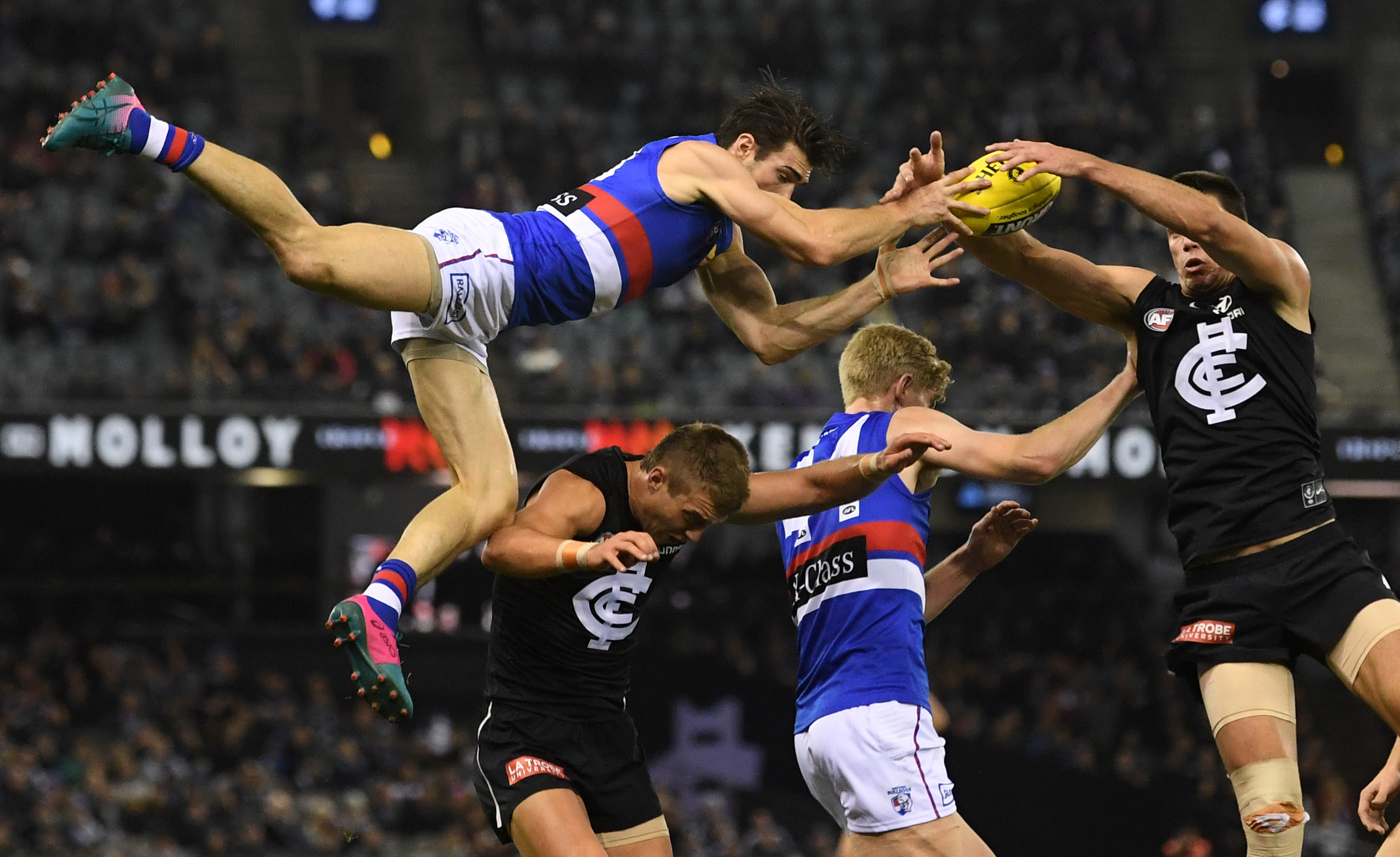 What goes up, must come down. And vice versa. Photo: Julian Smith / AAP

This loss had the distinct vibe of an encore performance of incompetence, a final farewell bow to our dreams of a Number One draft pick.

With games still to come against Melbourne, Sydney, Gold Coast and St Kilda (not to mention the Crows – bearing in mind that fronting up for a shock loss would be another ‘Peak Adelaide’ moment), there’s the very real danger Carlton will accidentally win at least a game or two – or more – before season’s end.

Still, it can’t be denied that from that trio of tight tussles our best interests prevailed twice, and as Meatloaf so presciently told us, two out of three ain’t bad.

But, as we’ve already well established:

And the joy of this 2019 season is the sheer volume of avenues to exercise this pettiness.

After all, while the team for which we barrack remains a constant, the teams we barrack against are a complex and constantly evolving proposition.

There are teams you can hate as a general principle (Port), teams you hate because of particular historical slights (Richmond) and teams that fall out of favour because of objectionable players during a certain era (such as when, say, Geelong steals your best player before launching into raging premiership favouritism).

And then there are teams you barrack against despite broad ambivalence because their loss is your gain, as St Kilda’s was this week and Carlton’s is every week this year.

In the average season, this latter form of hatred doesn’t usually kick in until well into the back half of the year, as the permutations of finals qualification become more stark.

In 2019 however – a year in which we’re concurrently chasing both the top and bottom ends of the ladder – almost every match has some bearing on our fortunes.

And thus, while in years gone by I’d have been content with merely a Crows win and a Port loss, 2019 is a more complex beast.

So I’ll be honest – I’m still slightly annoyed about that Suns result. 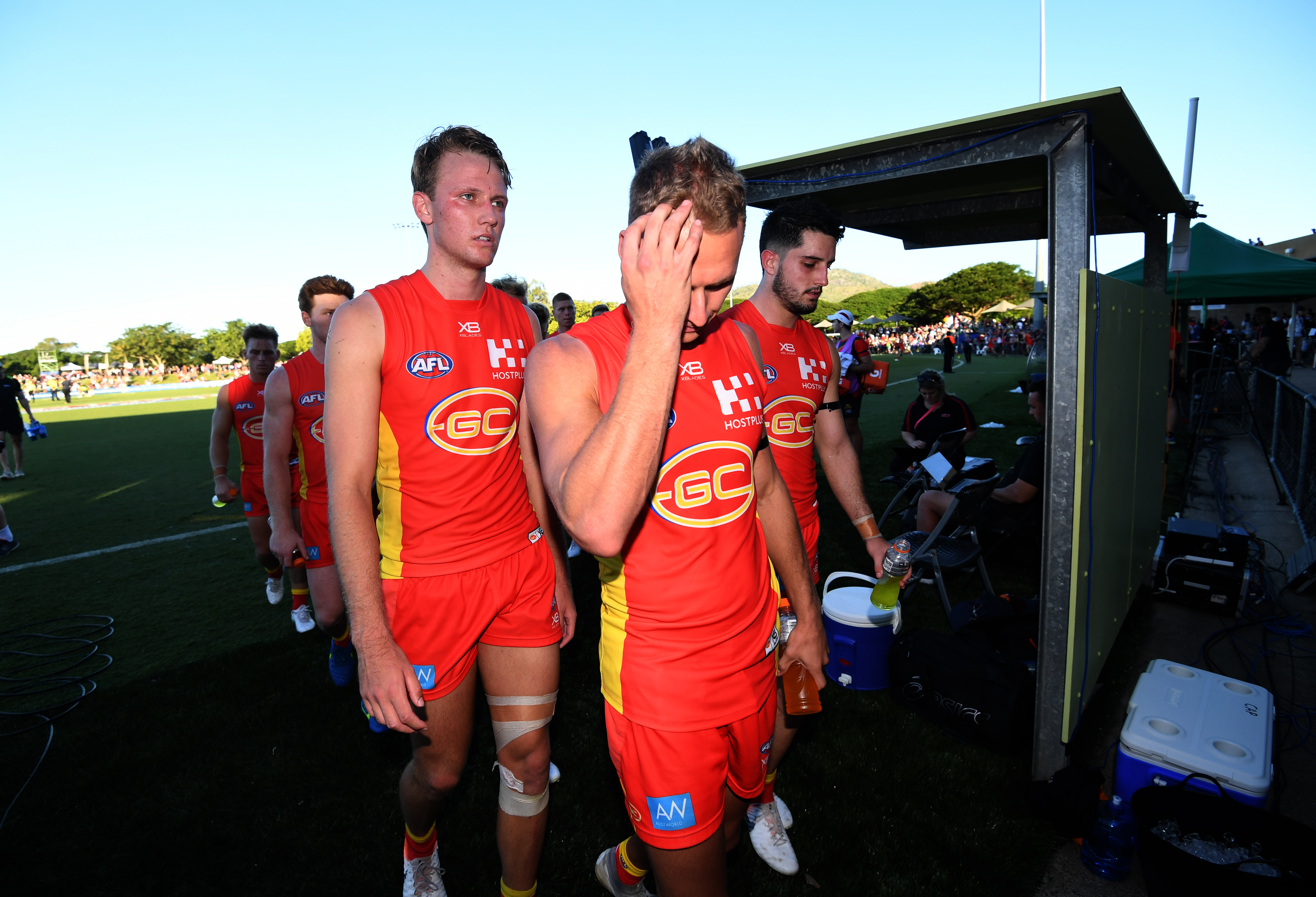 Gold Coast players, presumably pondering the fact that they may have deprived us of a Number One draft pick. Photo: Dan Peled / AAP

Which probably means the bye has come at a good time.

I’m not sure if the Adelaide players need the week off – but I’m pretty sure I do.

Touch of the Fumbles is InDaily’s shamelessly biased weekly football column, published on Mondays during the AFL season. It will return in a fortnight.