More funny “peculiar”. Funny as in “this is a strange and slightly heartbreaking piece of observational flotsam”.

When I had my 21st birthday celebrations, they were (not that I knew it at the time) nestled happily between two successive Adelaide Football Club premierships.

Which means, parenthetically, that given many of my friends also turned 21 in quick succession, there was presumably an awful lot of celebrating going on in that delightful 12 months between the Septembers of 1997 and ’98.

However, and this is the funny, as in peculiar, bit. There will be people turning 21 later this year who have literally not lived to see the Adelaide Football Club win a flag.

Which means that not only am I now fairly old, but so too is our premiership drought.

Not that I didn’t know that already (I do, after all, mention it most weeks, as you’ve probably noticed). But every now and then these things crystallise in your mind with such perfect and bitter lucidity that you have what alcoholics refer to as a “Moment of Clarity” and think: “Wow, I’ve spent literally half of my stupid life obsessing about my equally stupid AFL team’s next flag – and we’re genuinely no closer to it now than we were two decades ago.” 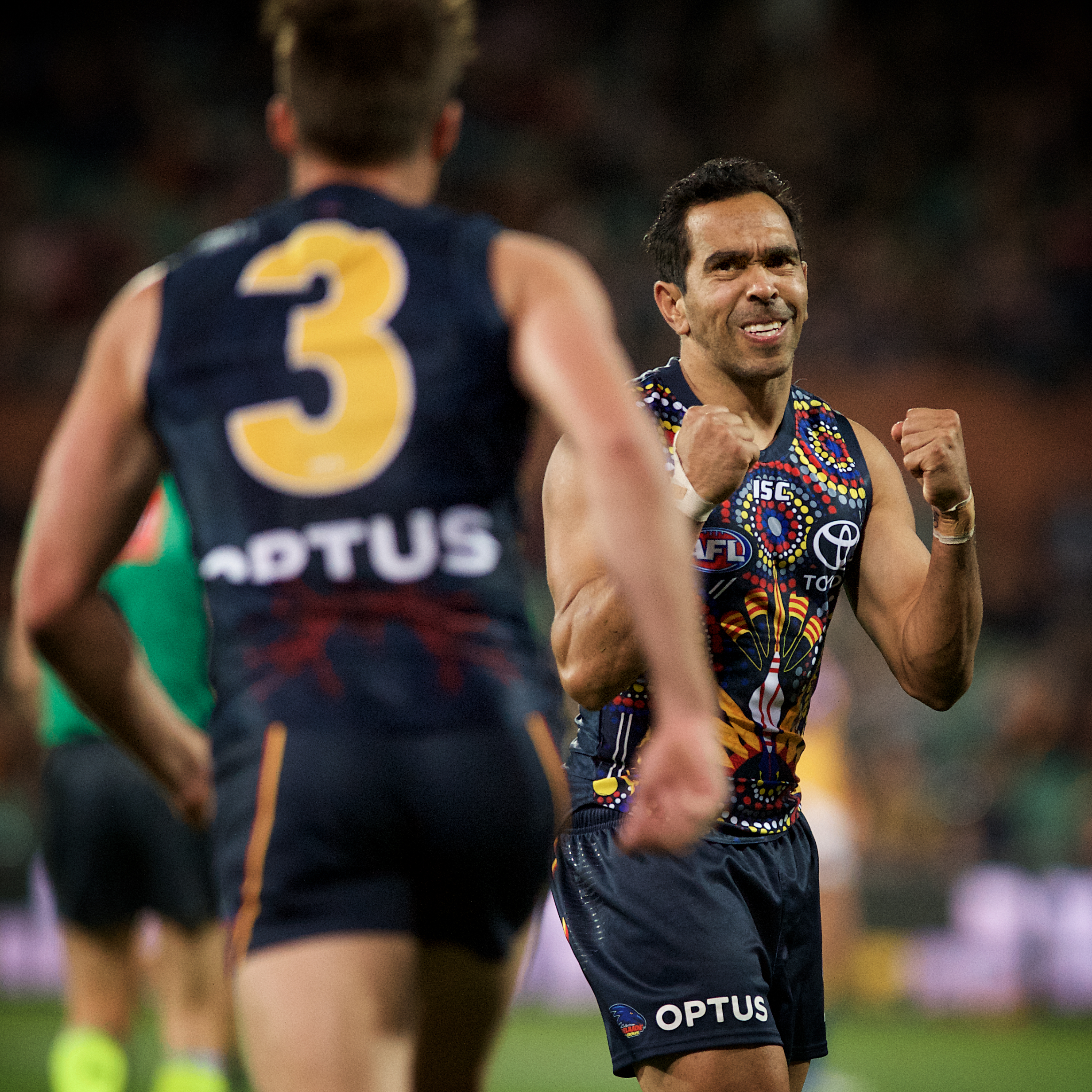 Eddie Betts celebrating a goal. A couple more would have been even better. Photo: Michael Errey / InDaily

Indeed, we may be even further from it.

At the very least, it’s quite difficult to tell precisely where we are, since Don Pyke has recently become “Bizarro Don Pyke”, and is consequently doing the exact opposite of things he used to do a mere two seasons ago.

Back in 2016-17, for instance, he would arouse the ire of Crows supporters by refusing to play anyone who wasn’t already in the team.

The conundrum this created for those players who were not already in the team was similar to the catch in those job ads that stipulate you must have previous experience – if everyone has the same stipulation, how is one to ever get the requisite previous experience in the first place?

Anyway, it was thus that the likes of Gallucci, Poholke, Doedee, O’Brien et al had literally a game between them in 2017.

Mind you, given we made a Grand Final in 2017, this wasn’t considered a major problem.

It’s just that these days the selection committee has taken a different tack altogether. 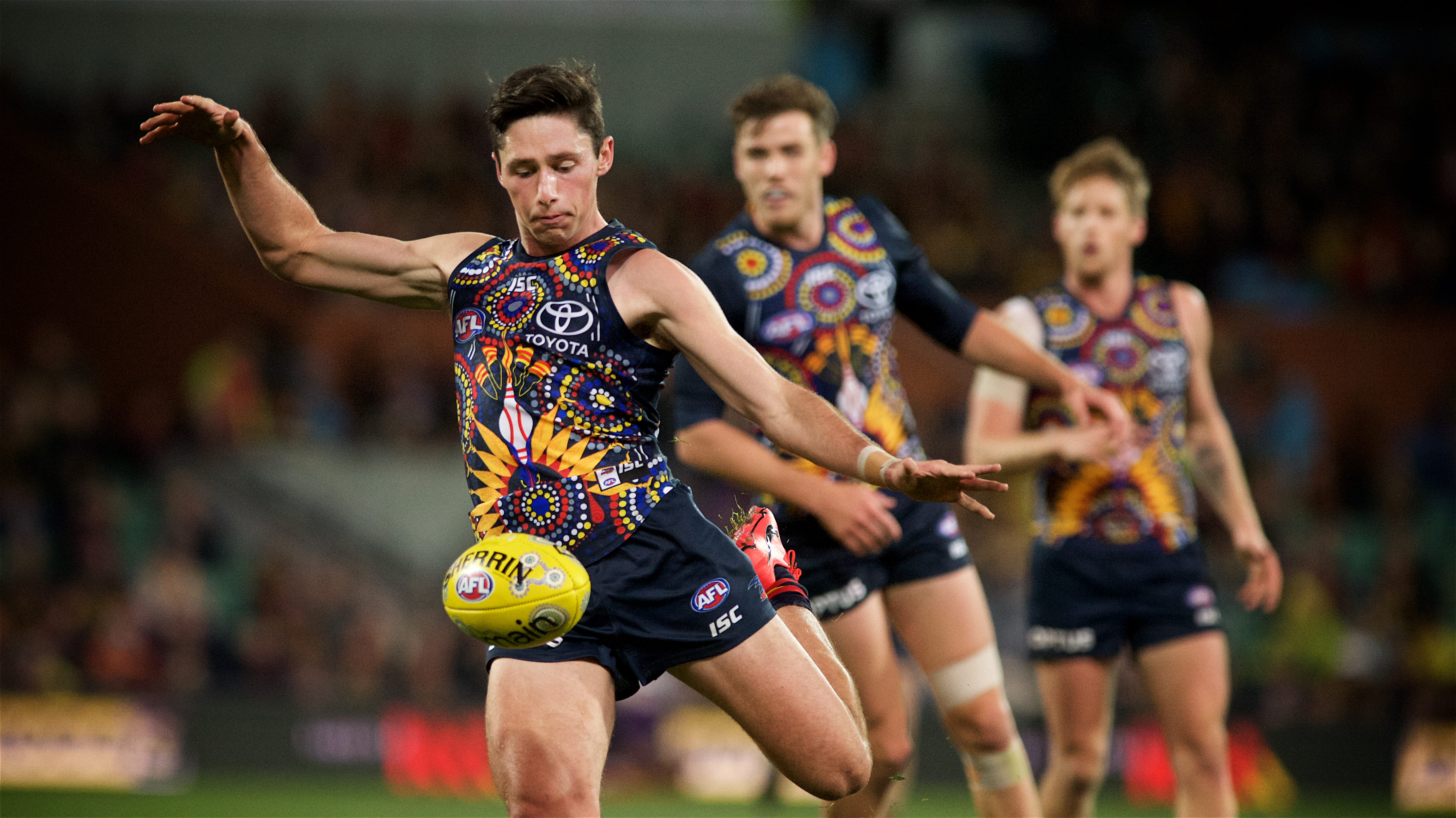 These days, if your games tally is looking a tad threadbare, you’re a walk-up start; whereas if you’ve a long track record of relative competence, they won’t have a bar of you.

And so it was that when the team sheet dropped shortly before 6pm on Thursday night, at first glance it appeared some kid in the social media department had got the “Interchange” and “Emergency” rows mixed up:

A more plausible notion might be that the team selection process this year appears to have taken on some kind of high-stakes footy-code virtue signalling.

For instance: Don Pyke would like you to know that he really, really doesn’t want to give Josh Jenkins or Bryce Gibbs a game.

How do we know this? Well, firstly, because, as you’ll note above, he didn’t name either of them in the side – despite the ostracised forward kicking a bag of six (from 22 touches, seven marks and five tackles) in the previous week’s SANFL win, and the star Blues recruit similarly garnering a respectable (and now much-discussed) 22 touches and five tackles – along with two goals – in our one-point loss to Brisbane (by the by, it was nice to see the Lions getting a taste of their own medicine against Freo last night). 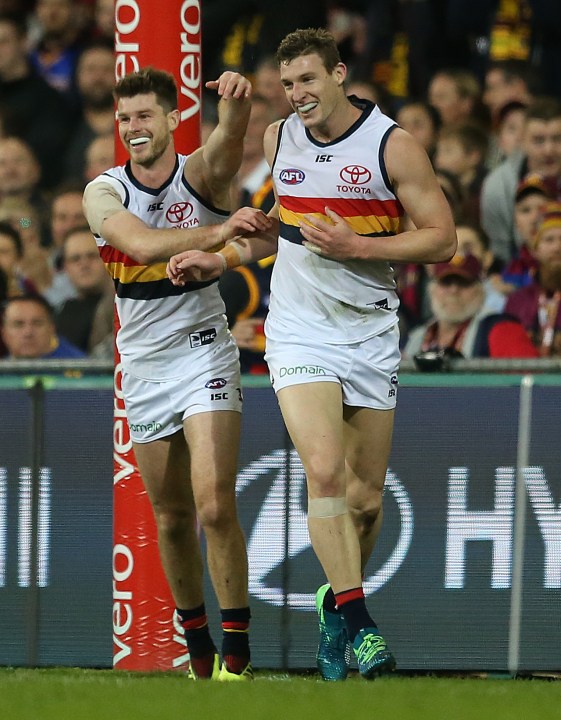 As you’ll also note above, though, both Gibbs and Jenkins remained listed emergencies for Saturday’s West Coast game. And yet, between Thursday night and Saturday afternoon the Crows made not one but two late changes to their named side, and they still couldn’t get the nod to play.

That suggests, it must be said, some dedication to the cause.

Now, Don Pyke is a man who publicly keeps his cards close to this chest, but there’s enough evidence about the place to suggest diplomacy isn’t one of his stronger points. 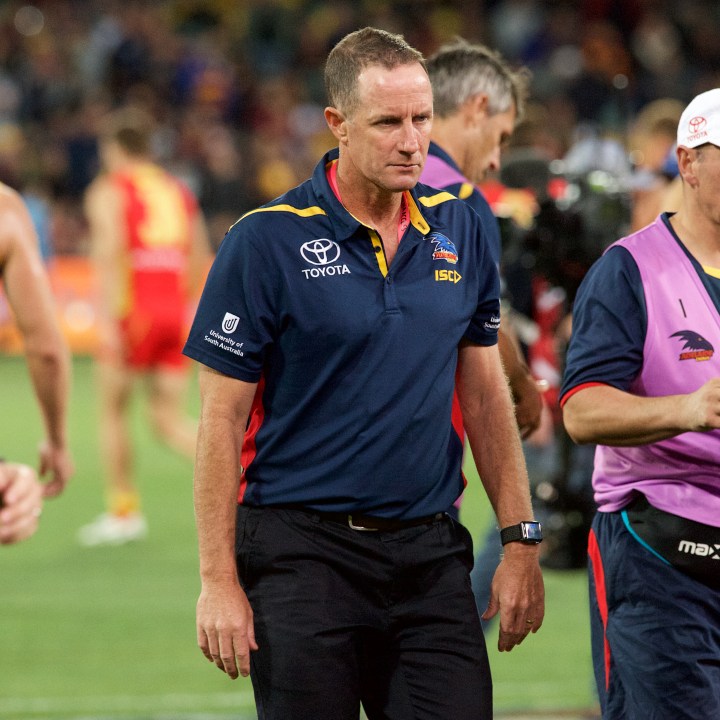 Don Pyke (above) after a win, and (below) after a loss. Or is it the other way round? Photos: Michael Errey / InDaily 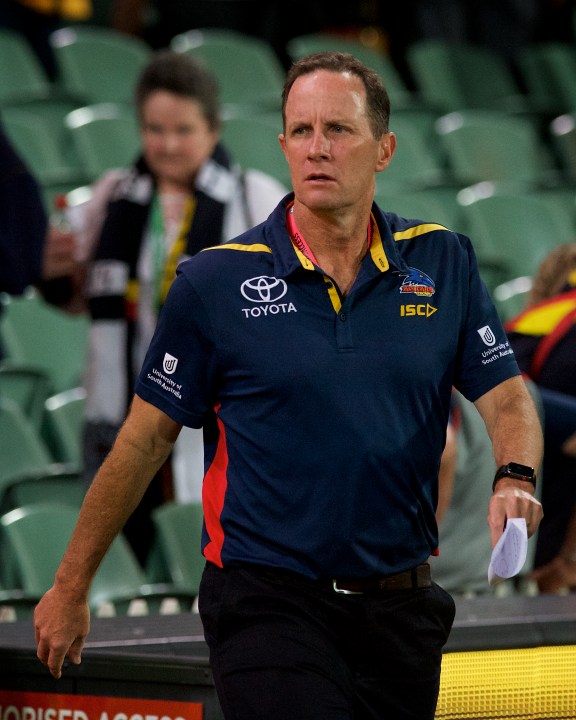 Charlie Cameron, for instance, reportedly said this week that one of the reasons he was driven to take his career to the next level at Brisbane was that “I remember some comments from my exit review with Don Pyke and a few other coaches that really stuck out [and] and it drives me to prove them wrong”.

Of course, Charlie is just the latest in a long line of players (among them Mitch McGovern, Jake Lever, Jack Gunston and, of course, my old mate Kurt Tippett) who left the club in circumstances that were less than amicable.

And who says we don’t have tradition!? 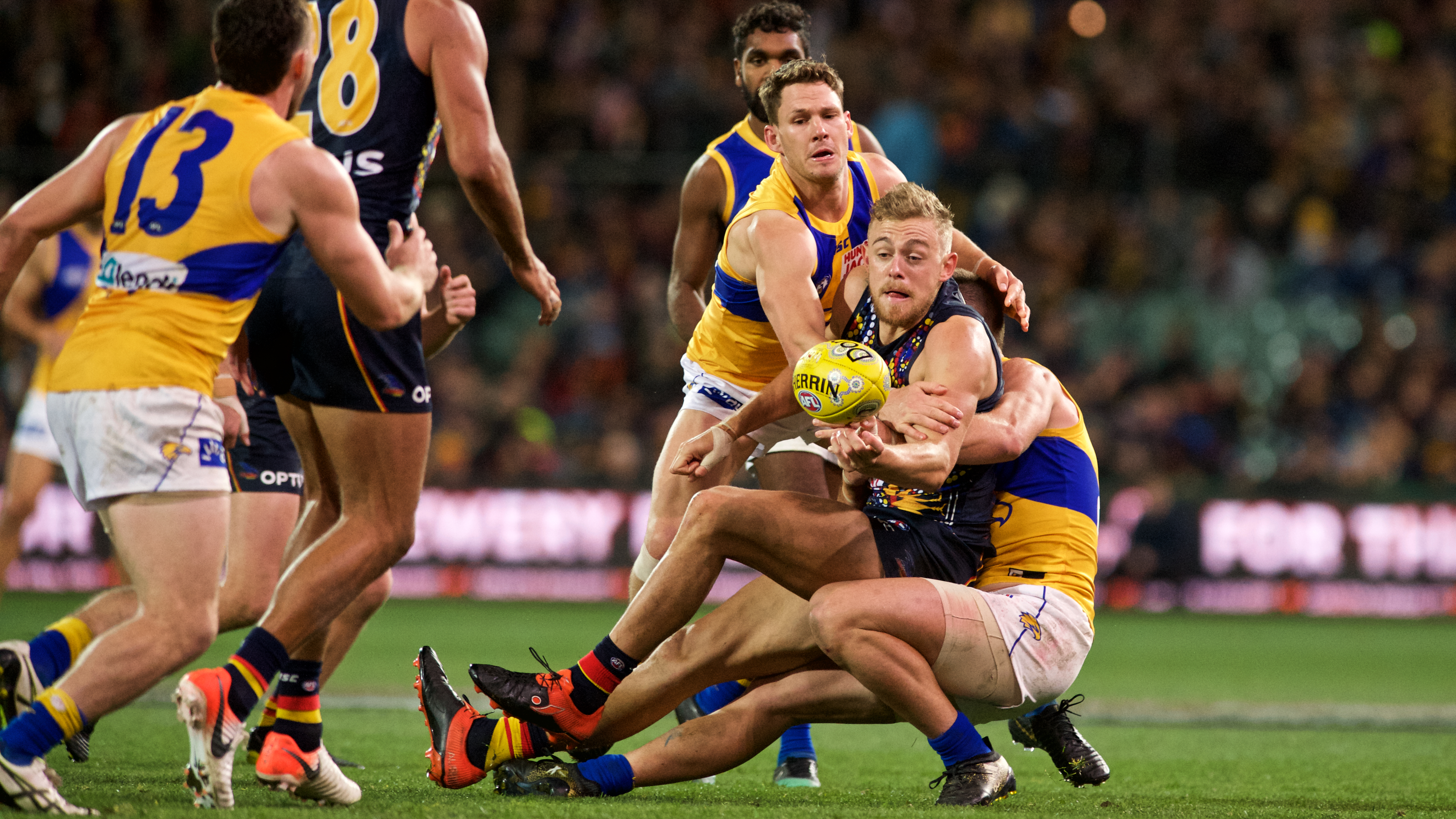 The West Coast midfield got on top after half time. Photo: Michael Errey / InDaily

It now seems fairly likely Josh Jenkins will be added to that list, given the selection committee’s evident aversion to big forwards who kick goals (and clear preference for big forwards who give away dumb free kicks at crucial moments). 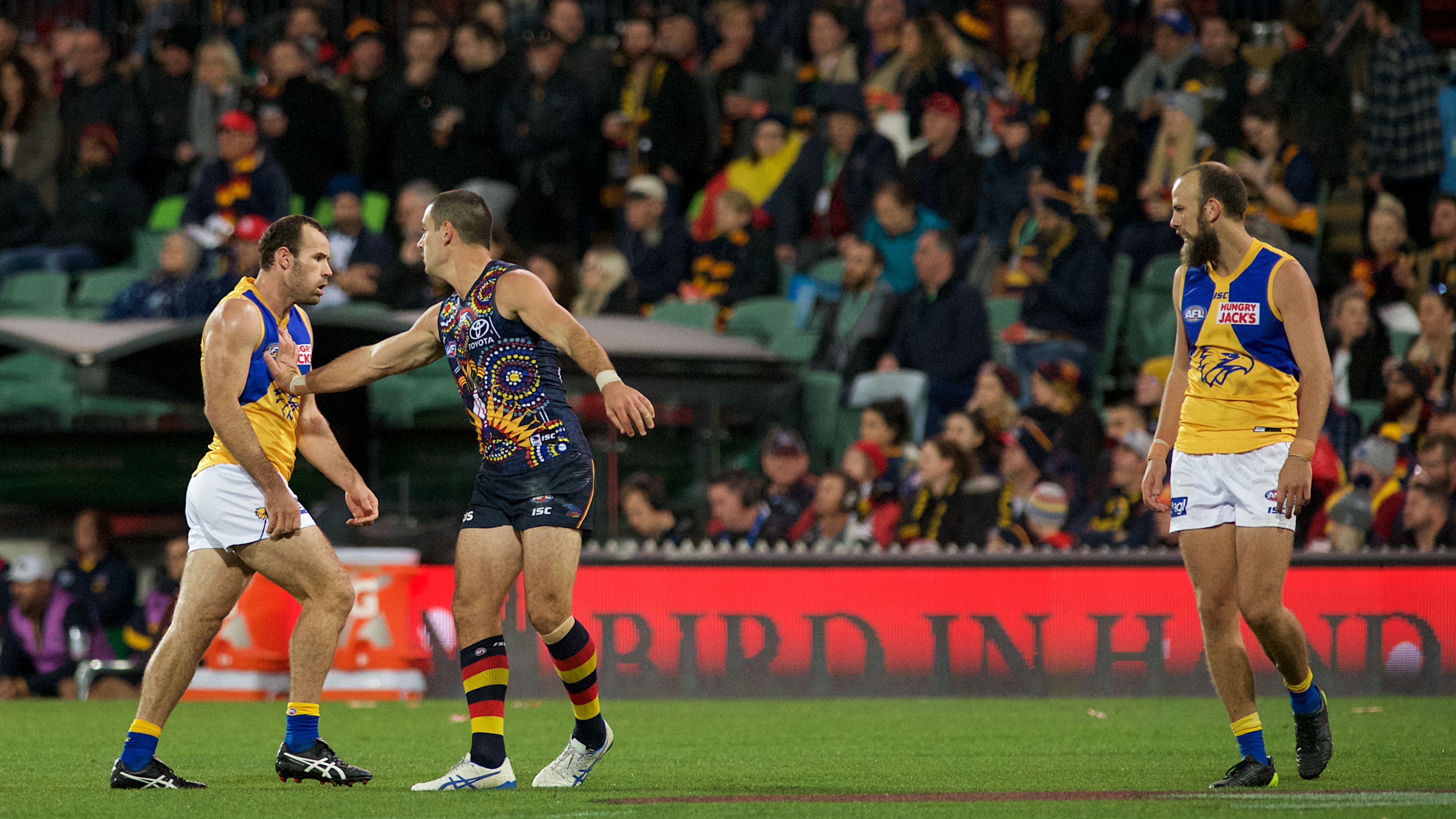 Sadly for Tex though, for the second week in a row he contended strongly for the coveted “inexplicable decision in a clutch moment of a tight game” award, only to finish the round a distant second to Sydney’s Dane Rampe, pictured below.

It’s possible, of course, that neither Gibbs nor Jenkins is an integral part of Pyke’s latter-day uber-defensive game plan – although there was also something to be said for the old uber-attacking game plan. I particularly liked the way it used to help us win games, for instance.

That’s an aspect I’ve noticed is somewhat lacking with the new approach.

Unless – and stay with me on this one – unless we’ve just been tanking for midseason draft picks.

But the fact both were close shouldn’t distract us from the fact that losing to Brisbane away and West Coast at home is not the mark of a genuine contender, just in case any of us was still under that delusion.

Mind you, we should note that since West Coast have only lost at Adelaide Oval twice in 10 visits, they actually have a better statistical chance of winning there than either of the teams that call it home.

(In fact, quite amusingly, Port Adelaide has only the fifth best winning percentage at Adelaide Oval, behind the Eagles, Sydney [4-1], us and Hawthorn [5-3].)

And Port, Gawd bless ’em, obligingly helped ensure the weekend wasn’t a complete write-off by scoring precisely nothing in their first term against the Hawks in Tassie, en route to a fairly routine loss, while Melbourne tried doggedly to lift our jaded spirits with their patented comedy stylings (related: we’re playing Melbourne next week). 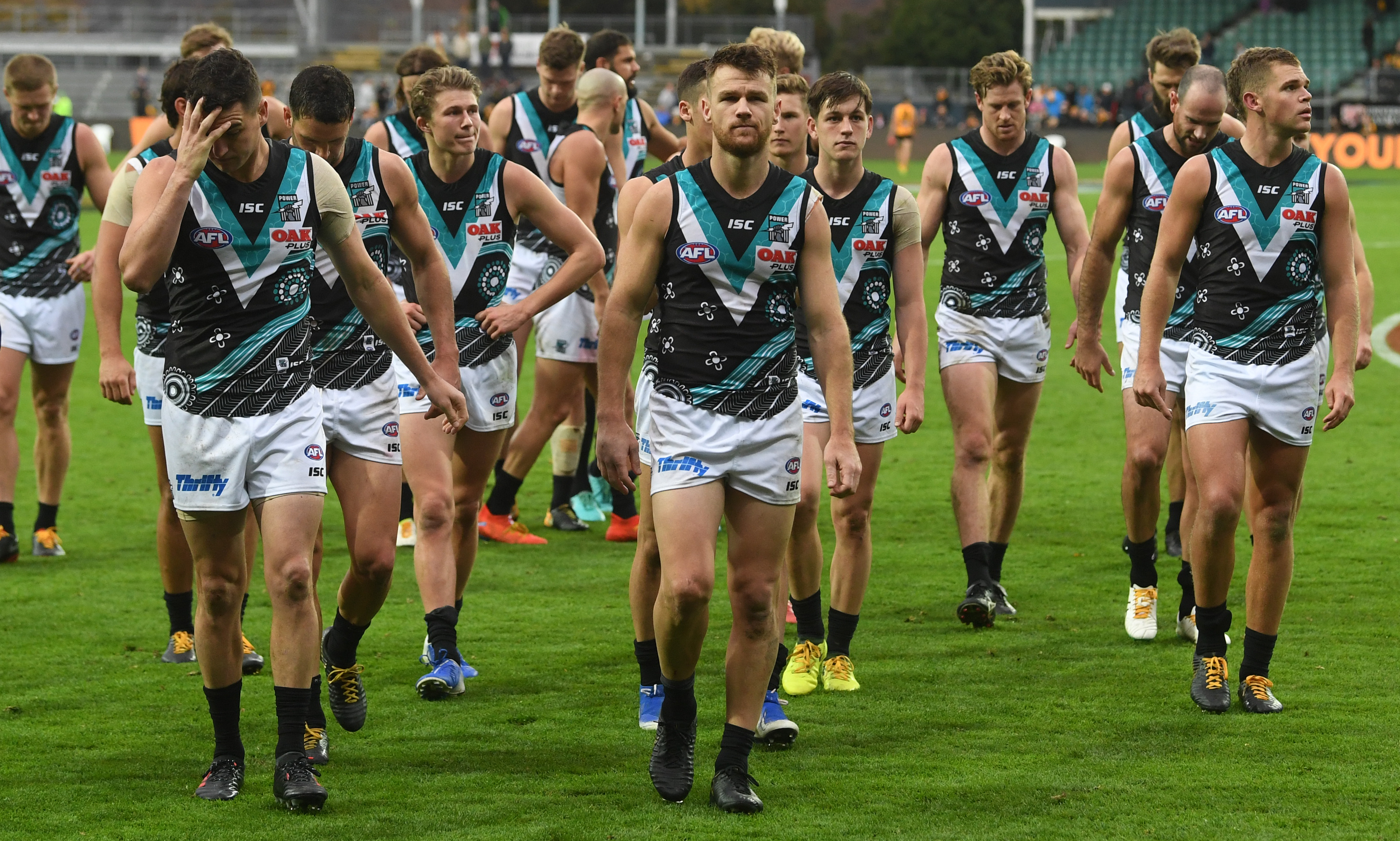 And of course, the most consistent of my “weekend barometer” teams, Carlton, had one of their fortnightly “close but no cigar” defeats against the not-very-good St Kilda, as both teams worked hard to ensure anyone who witnessed the clash would reject the existence of a benevolent creator.

Still, I haven’t barracked for the Saints that fervently since I had Riewoldt, Montagna, Fisher and Gilbert in my Dream Team a decade ago, and they did at least manage to hold off a dogged but disorganised Blues outfit. 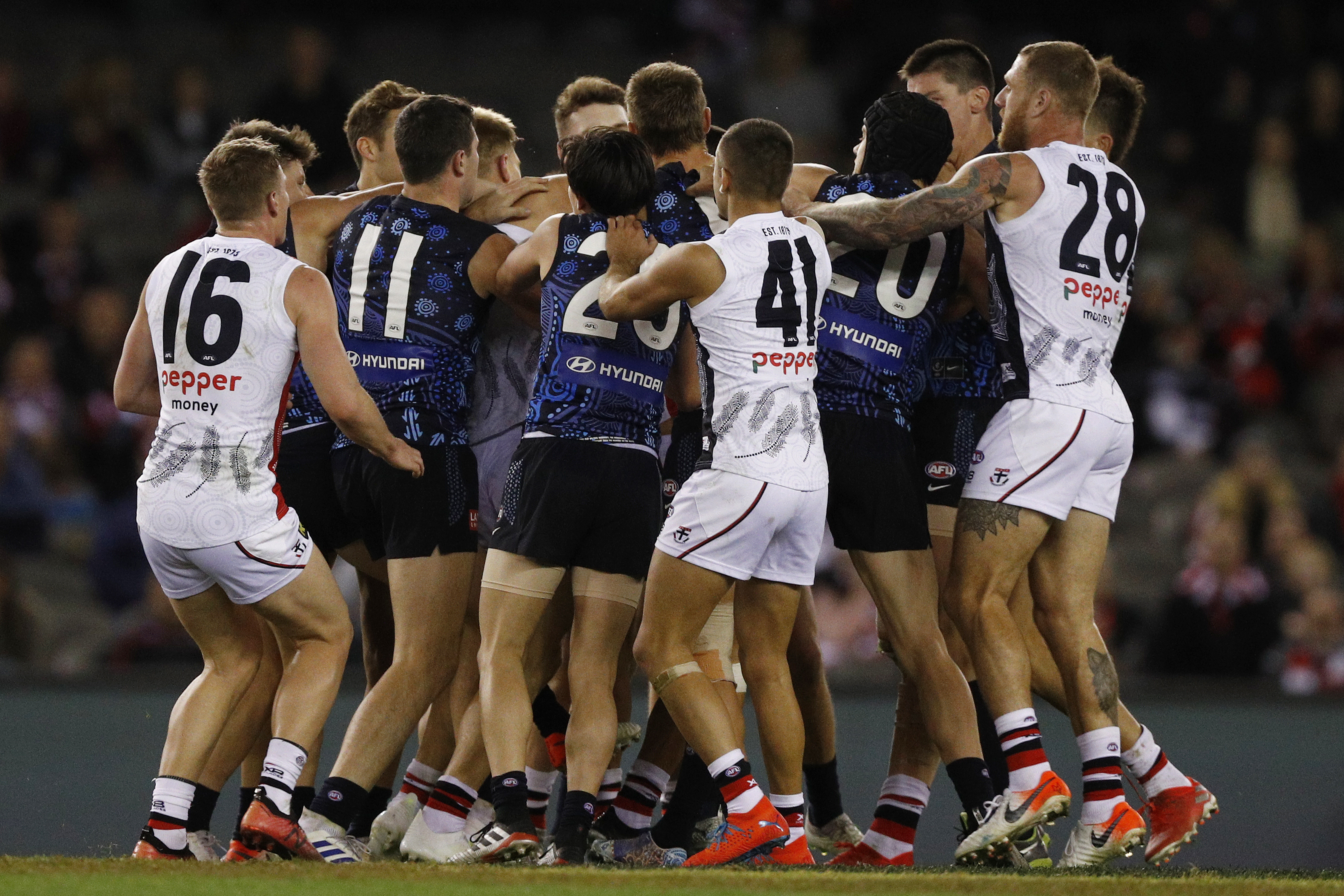 Mind you, Carlton’s draw looks ominously manageable from here on in, and I could yet see them skipping ahead of any number of teams currently mired on three wins – with their late season clash with a visiting Gold Coast bizarrely looming as the Crows’ most important game of the season.

Which is a roundabout way of pointing out that our premiership ambitions for season 2019 have now taken a backseat to our far more realistic prospect of jagging a top-two draft pick.

Which, given our scant and generally regrettable history with high-end draft picks (looking at you here, Angwin), would at least be something to salvage from 2019 when we look back in another 21 years.

Of course, part of the folklore of that flag double that sandwiched that year of celebration was the unlikeliness of it all. In Blight, we had found our fleeting Messiah, and we’ve spent two decades since looking for another – which, to be fair, is a hell of a burden of expectation to bear.

In 2017, it appeared our search was at an end, but the two years since have suggested something else altogether.

Which may be overstating things somewhat, admittedly. Nonetheless, at the halfway mark of the 21st season since our last flag, we do find ourselves at one unfortunate point described in Monty Python, although in our case it’s Not At All Funny in any way.

There’s a mess alright – but still no Messiah.