Much like the Labor Party, I will remember Saturday May 18, 2019 for a heartbreaking loss.

Much like the Labor Party, I will remember Saturday for a bad result in Queensland.

Much like the Labor Party, I will remember it for the way our leader dropped the ball instead of delivering the win with a safe pair of hands.

And much like the Labor Party, we are left to rue a defeat that most sensible pundits would have pencilled in as an easy win just six months ago.

Yep, it can truly be said that Saturday May 18, 2019 delivered a close and enthralling contest that will be talked about for years to come. Namely, our one-point loss to Brisbane at the Gabba.

But it’s a loss about which we can’t really be too despondent. It was, after all, a relentless, brutal contest and – while we may have provided more than our share of jaw-droppingly stupid moments – the Crows kept coming. Even when half our backline spontaneously wiped itself out, the Crows kept coming.

Alex Keath and Kyle Hartigan had a huge collision.#AFLLionsCrows pic.twitter.com/m9EaF99Fou

Even at the death, they kept coming.

Of those aforementioned moments of jaw-dropping stupidity, the regulation uncontested chest marks to Tex and Tom Lynch with the game in the balance stand out, of course.

Each had a distinct “you’ve just dropped the World Cup” feel about them (although, granted, a Round 9 Home and Away game against Brisbane carries a little less heft). 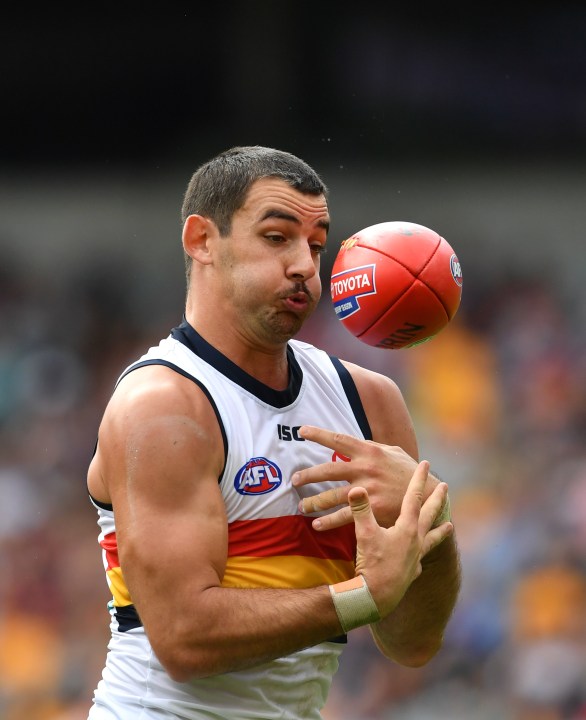 Tex took seven marks on Saturday. This was not one of them. Photo: Darren England / AAP

The former saw a near-certain six-pointer go begging and the ball ricochet back up the field, where Charlie Cameron goaled for Brisbane.

Now, I’ve got no issue with Tex gifting Charlie a shot on goal per se. It’s just that I prefer it to happen when Charlie is playing for Adelaide and the goal in question is the sealer in an away elimination final against the Bulldogs.

And look, it’s sad that it’s come to this and all, but Charlie Cameron has now earned himself a spot on the Fumbles’ Shitlist. 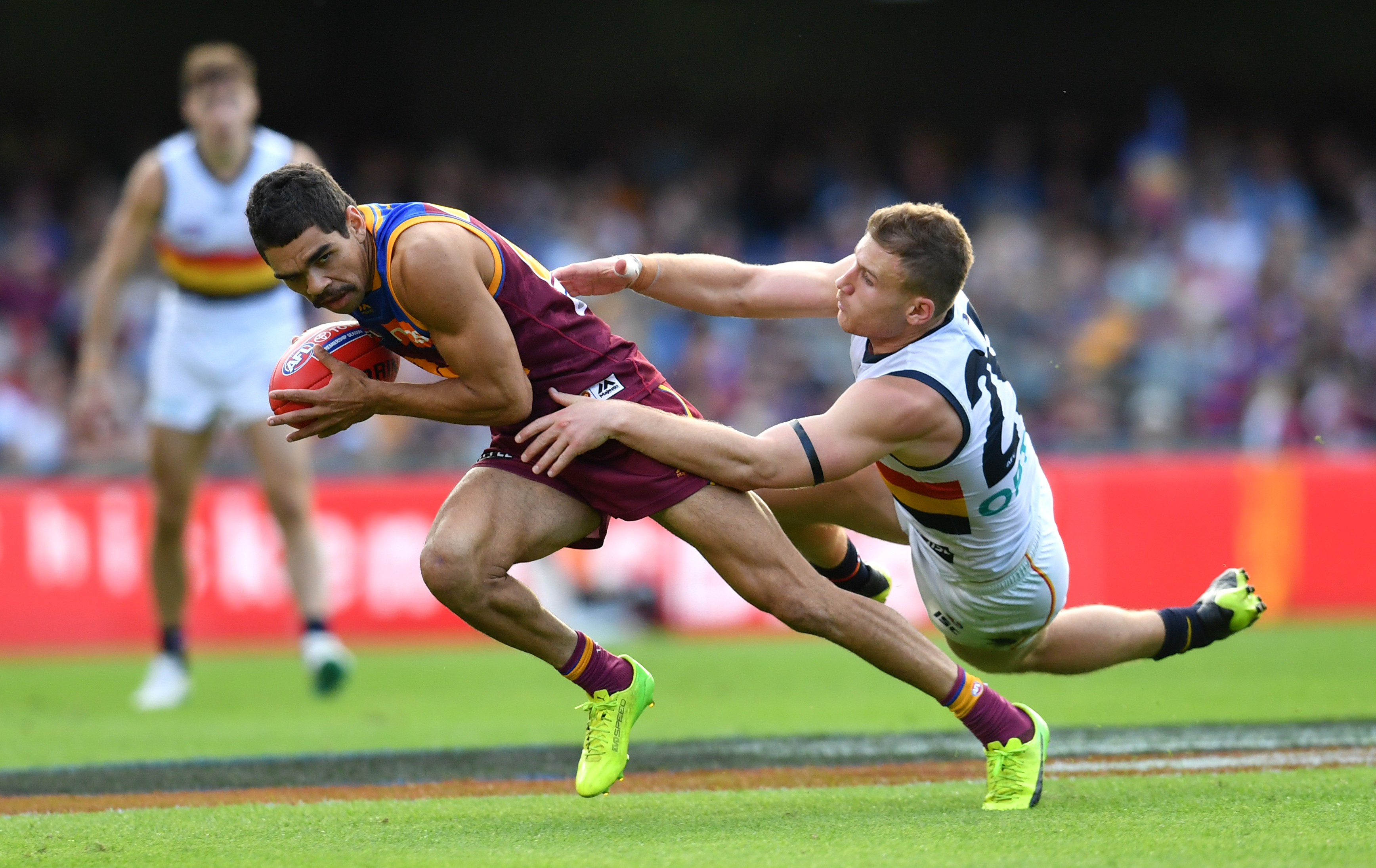 Charlie Cameron, reminding us that he is very fast… which used to be a good thing. Photo: Darren England / AAP

I still have enough residual goodwill about his best-on-ground preliminary final that if he’d played poorly I might have given him a leave pass, but I just can’t look past three goals in a match decided by a solitary behind.

And it wasn’t just Charlie: there were ghosts of Crows past all through this loss.

Jarryd Lyons was solid with 21 touches and a crafty soccer goal, while it’s always worth remembering that Adelaide planned to pick up Lachie Neale in the 2011 draft, but decided to get Nick Joyce instead (no, me neither).

Anyway, Neale had 26 touches to halftime and was best on ground by a mile, so that’s nice. 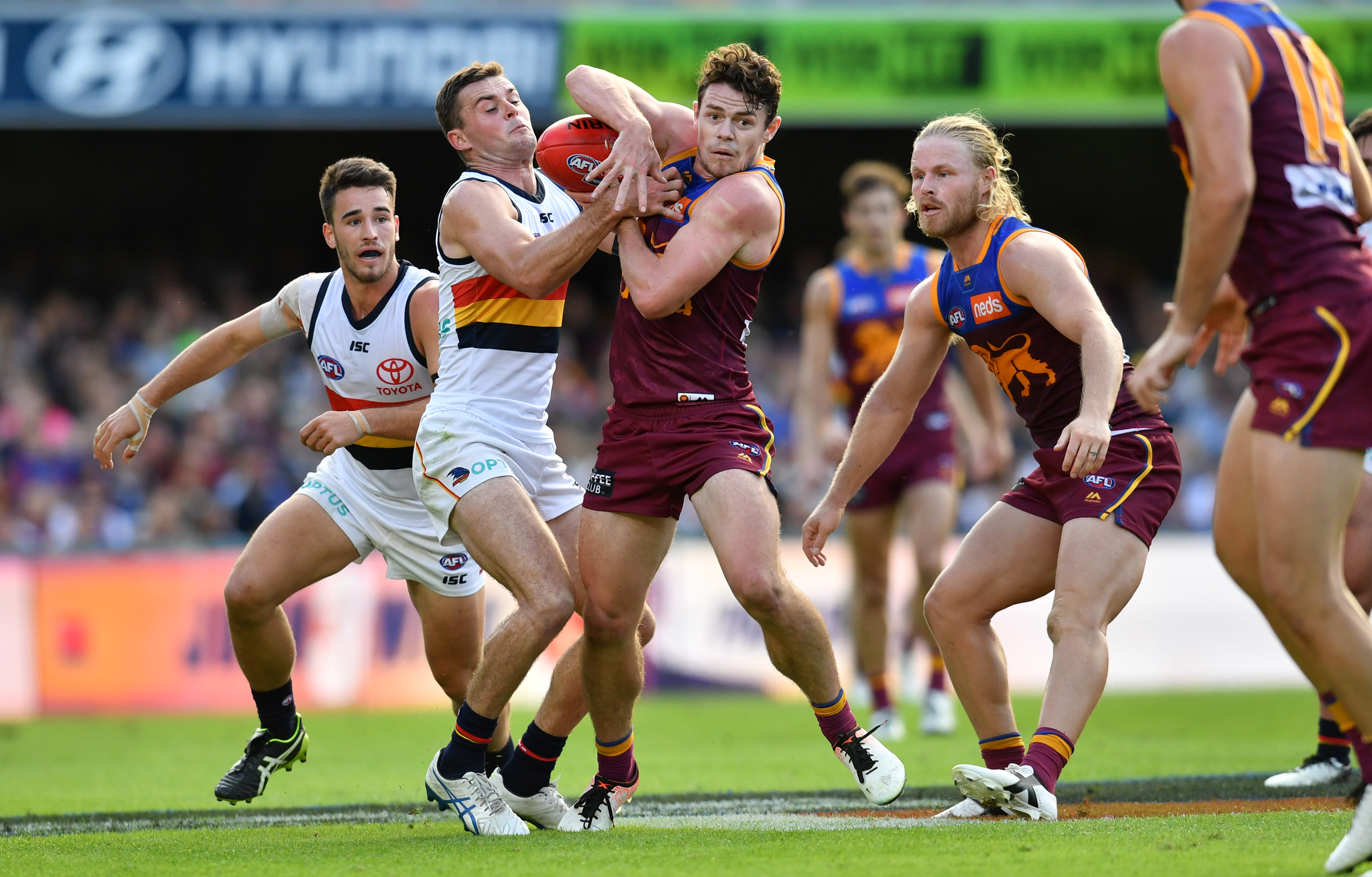 Lachie Neale was the difference for Brisbane, which is all very unfortunate. Photo: Darren England / AAP

In the end, the obligatory rationalisation was trotted out and Brisbane – no longer, sadly, the team we briefly enjoyed beating by three-figure margins – didn’t deserve to lose quite as much as we did.

But as Saturday progressed it became clear that nailbiting finishes were just the order of the day.

The two evening matches playing out against the backdrop of The Scott & Bill Show were decided by a total of 12 points.

Even for the losers, though, there were silver linings.

Freo, for instance, might have lost a thriller but could at least console themselves that Damien Drum retained his seat for the Nationals – one of the few times in his career that he’s scored back to back wins.

The Kangaroos/Sydney game meanwhile was just a small, good thing in the midst of all the chaos, guaranteeing that – whatever the result – one or other of Carlton’s closest rivals for the wooden spoon was certain to get a win. 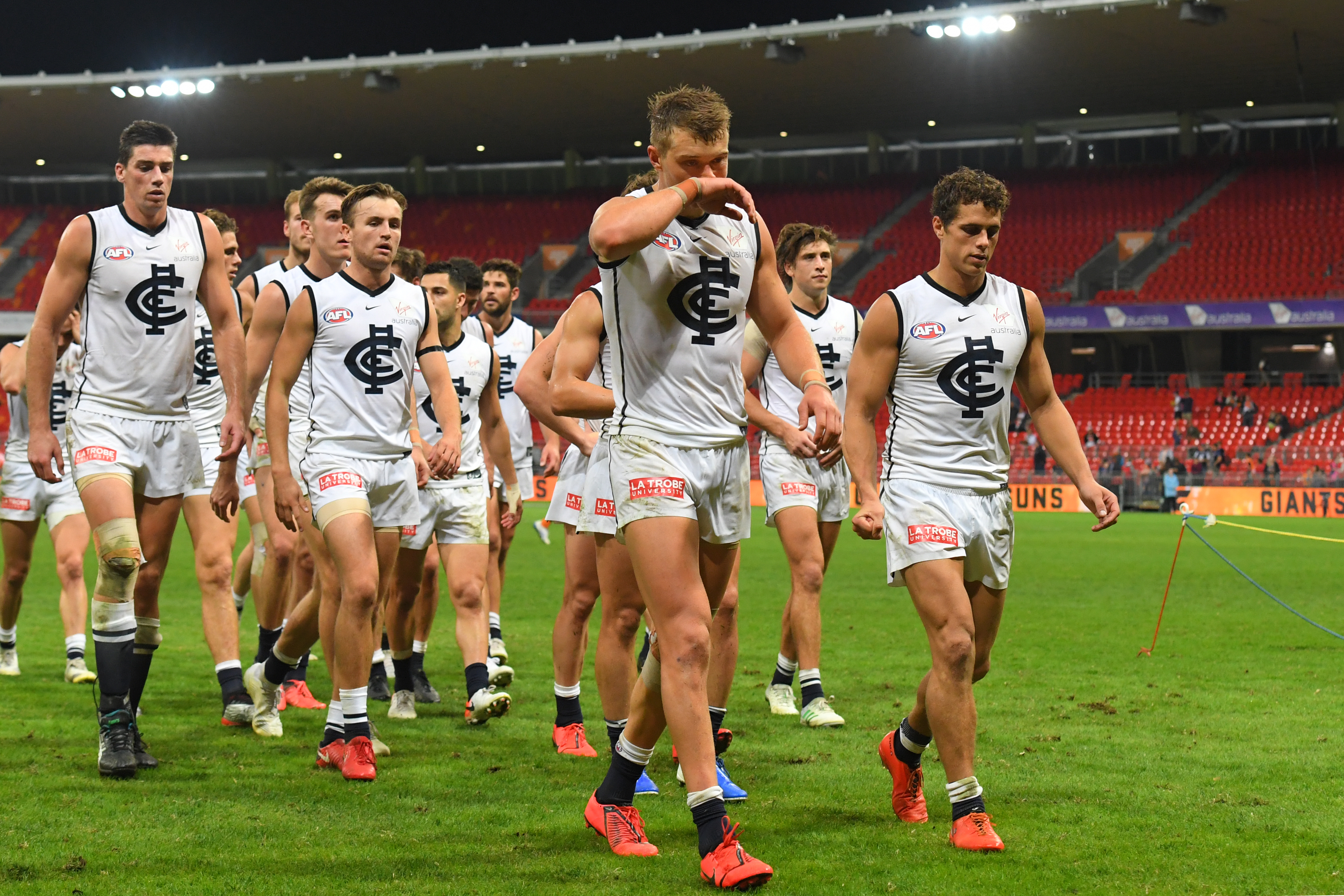 At least one of our teams didn’t let us down this weekend. Photo: Dylan Coker / AAP

In the dark old days (ie every year preceding this one), this round of football would be cause for abject despair.

The Crows lost by a point.

The Power’s dream run through the competition’s minnows (effectively the very same run that saw us climb from 14th spot after Round Four to 3rd last week) kicked off in predictably annoying (or annoyingly predictable) fashion, shaking off a determined Suns outfit for a runaway victory. 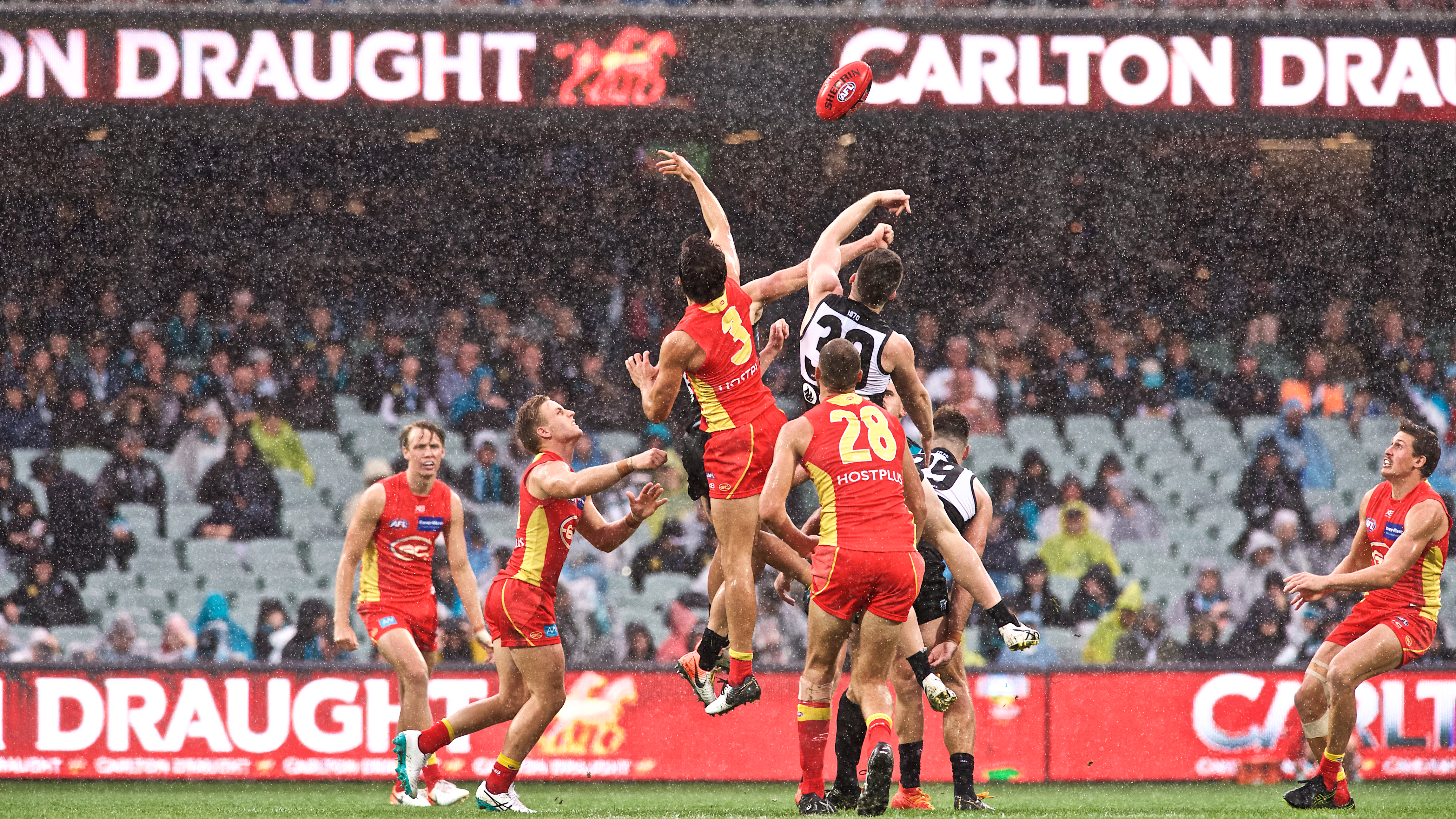 At least they got rained on in the meantime, I guess. Photo: Michael Errey / InDaily

Sure, Gold Coast were undermanned, but so were Port, whose team selection again favoured youth, with the long-awaited second game of their injury-dogged tall.

And, true to his namesake, Frampton did indeed come alive, showing the way with three goals. Port seems to have a penchant for namesakes, handing Joel Garner his first game at Adelaide Oval for about a quarter of a century. And while they humourlessly dropped Marshall, thus displaying a distinct lack of appreciation for namesake-based cricket puns, they redeemed themselves by recalling my favourite Port player of 2019 for the wet weather outing.

But while a Port win after an Adelaide heartbreaker would usually portend a week of despondency, the AFL happily scheduled the Blues’ trip to Western Sydney as the final match of the round, ensuring the weekend ended with a handy percentage booster in our quest for the Number One draft pick.

Carlton supporters have been getting annoyed with ‘honourable losses’ of late, so at least they would have been pleased.

For while the margin hovered exasperatingly short of the magical 100-point mark, the fact the Giants clocked up 38 scoring shots to Carlton’s 10 – and bettered their possession count by almost 200 – is probably more indicative of the defeat’s magnitude.

Still, as ever, let’s not get ahead of ourselves.

I mean, who needs Number One draft picks anyway? Carlton had four of them running around yesterday and it didn’t seem to do them much good.

But it’s nonetheless deeply satisfying to see that Carlton’s annual trajectory of competitive early season losses giving way to out-and-out shellackings appears to be on track again for 2019 (although I’ll pre-empt our inevitable shock Round 18 loss to them by pointing out that I fully expect this to occur).

In a season in which the Crows are still just short of the mark, and the Power are better than most of their supporters could reasonably have hoped, Carlton is proving a reliable and welcome consolation.

And, as we well know, after 21 years without a flag, we must take consolation wherever we can find it.