There comes a time in every father’s life when he tries to bestow some of the wisdom that has sustained him onto those who will carry the torch on through the next generation.

In that spirit, I thus took one of my po-faced progeny along to Adelaide Oval yesterday to bear witness to the pinnacle of footballing majesty that was Adelaide v Freo in Round 7 of the 2019 AFL season.

After all, why would I want to deprive my son of a lifetime spent savouring the boundless, dizzying joy and complete absence of stress and despair that following the Crows over the past two decades has given me?

And thus it came to pass in a fit of questionable paternal responsibility, that for the first time in a long time (let’s go with ‘ever’) I opted to sit and watch the game without a beer. 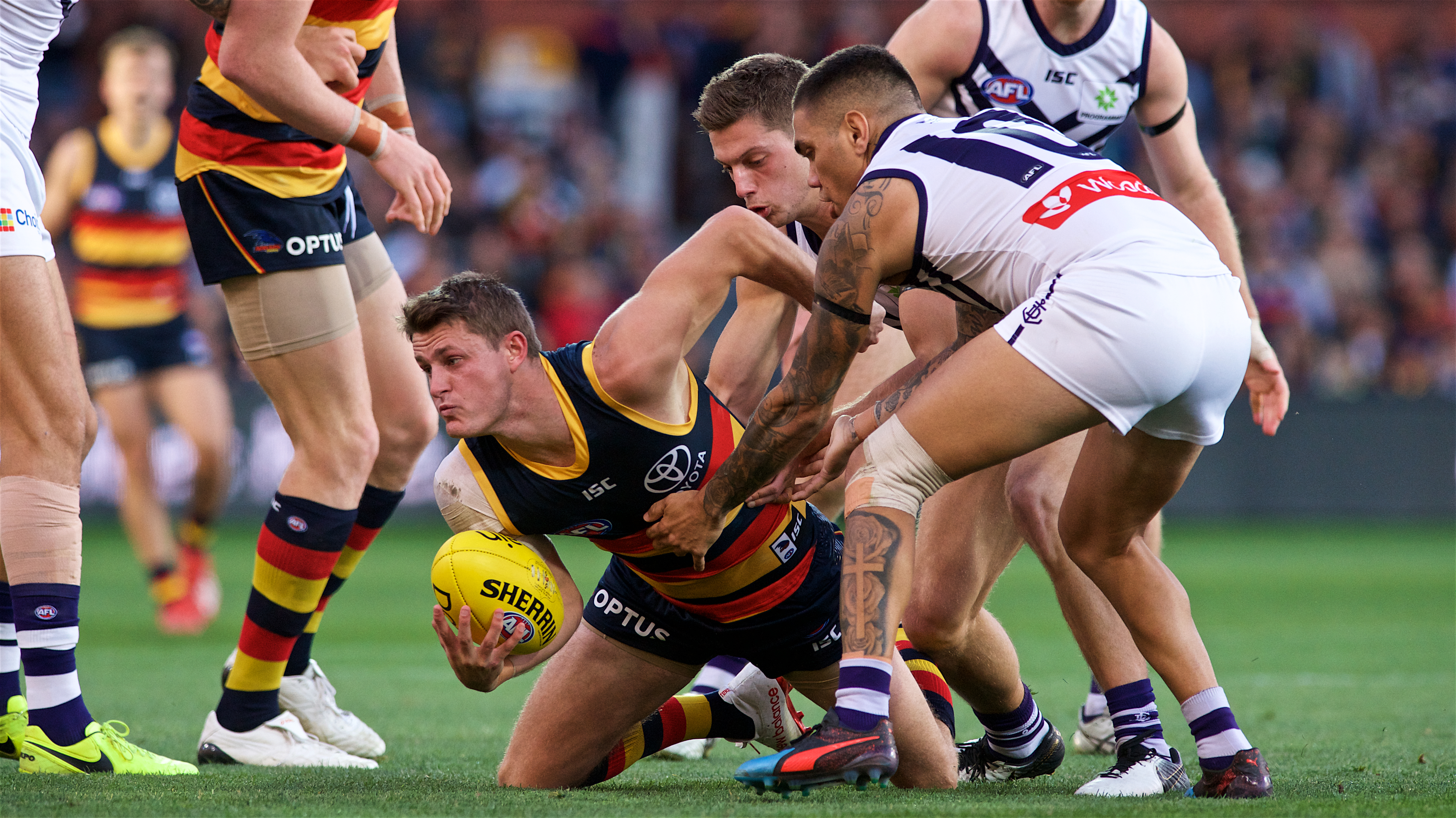 Matt Crouch’s struggle was nothing compared to my own yesterday. Photo: Michael Errey / InDaily

Really, I’m ok with this.

It’s not like I instinctively associate watching football with drinking beer or anything. Or that the sound of the opening siren sets me drooling like Pavlov’s pooch for a crisp lager, or as if I could hardly fathom the prospect of watching The World’s Most Frustrating AFL Team™ without some liquid refreshment to lift the inevitable mood suggested by that epithet.

Roughly halfway through the second quarter, the thought struck me.

Is there something a bit off about this particular game… or is it always this bad?

On the way into the ground, my son was handed one of those placards with ‘Goal’ written on it, which I informed him he should wave frantically in the air whenever our side kicked a six-pointer.

And then imagine that excitement inexorably dissipating as we execrably ground out a first half in which he was allowed to wave the banner just once in over an hour of play.

In hindsight, I should have encouraged him to wave it about ironically, although that would have entailed having to explain what irony means.

And, to be honest, he’ll have plenty of time to learn about irony if he continues to follow the Crows. Which seems unlikely after yesterday. 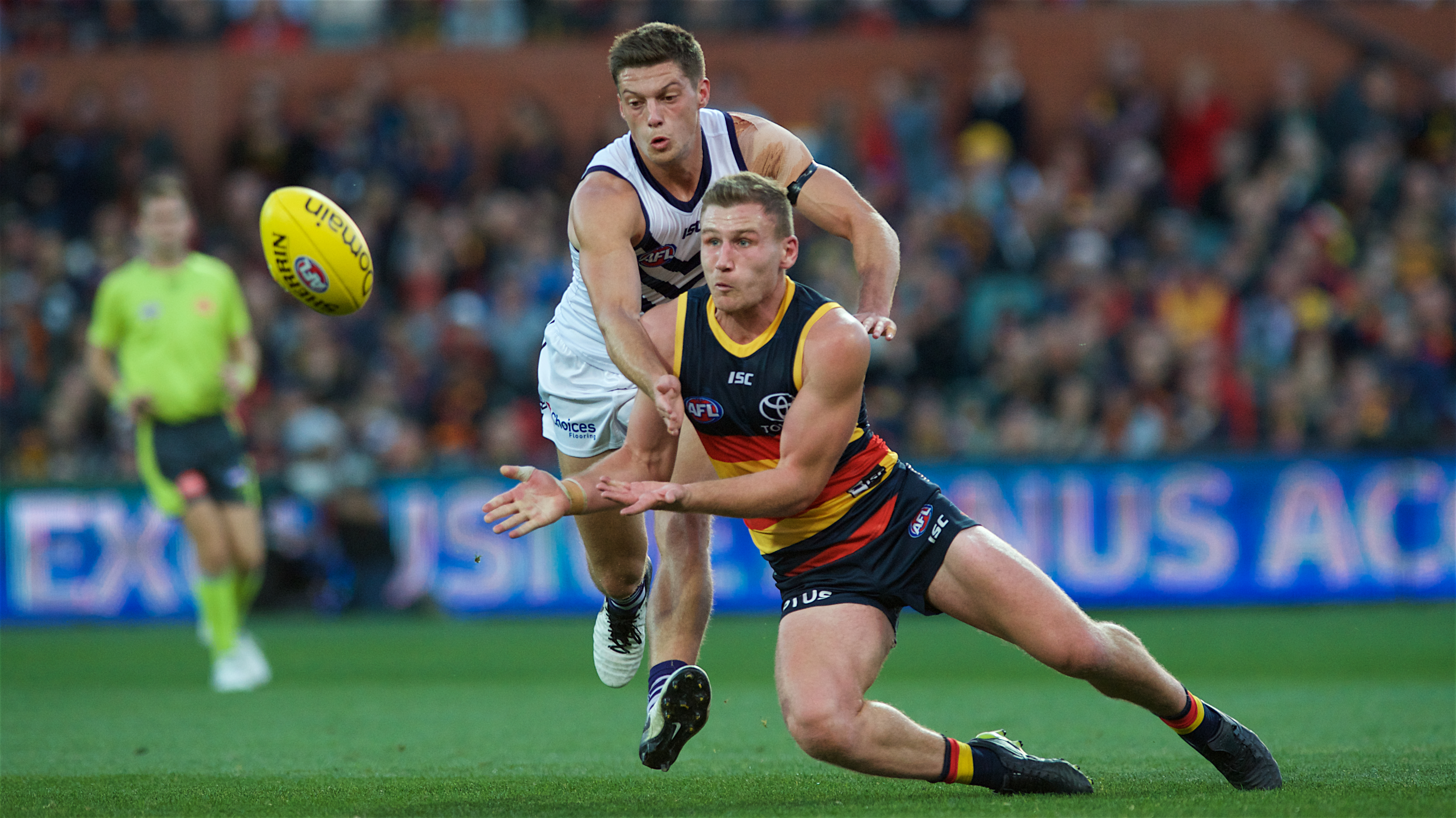 To be frank, if this was the game with which I was hoping to win my kid over to a lifetime of devoted Crows fanaticism, I made a terrible, terrible miscalculation.

Moreover, the thing about taking a youngish kid to the footy is that you must be resigned to missing frequent chunks of the actual game.

Which was almost a blessed relief on this occasion.

“Did we miss anything?” I would ponder hopefully to my mates sitting alongside.

Sometime into the third, he started fidgeting on the seat next to me and when I asked him what the problem was, he confessed: “It’s a bit boring!”

And nor, evidently, could anyone else present, with the crowd so silent one might almost have wistfully pined for the days of Football Park, and the unsubtle rev-ups of the late-lamented Crow-O-Metre.

The old stadium, already gutted, was recently removed altogether, taking with it the forever-unsolved mystery of whether that odd piece of pre-digital audience engagement was supposed to be pronounced ‘Crow-Oh-Metre’ (as in Two-Metre Peter) or ‘Crow-Om-eter’, as in ‘odometer’. 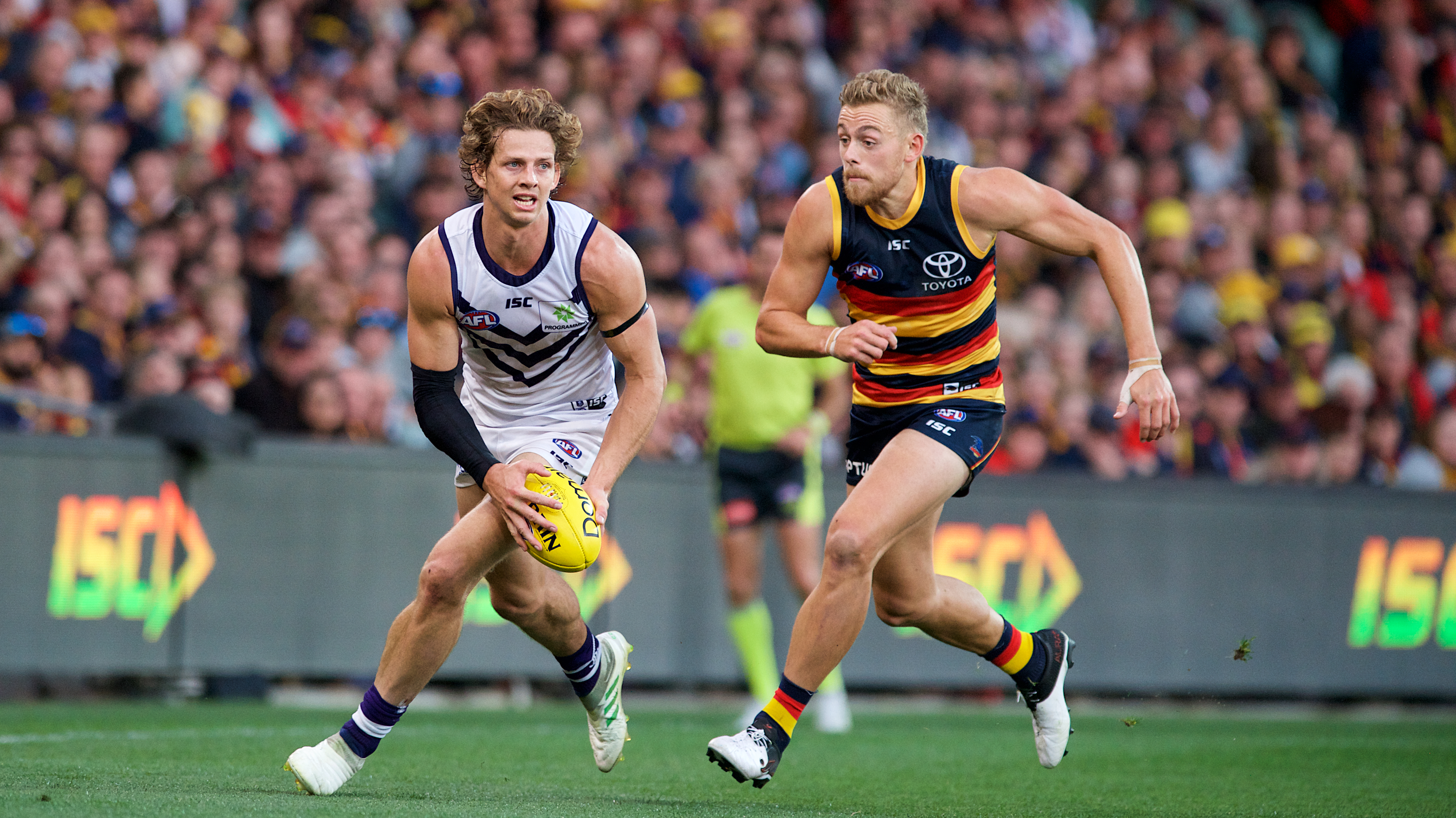 Greenwood racked up some stats on the odometer… or should that be the Odour-metre? Photo: Michael Errey / InDaily

Opinion appeared similarly divided on the airwaves as to whether yesterday’s game was a hard-fought scrap showcasing guts and persistence or merely a strong contender for the Worst Game Of All Time.

But we have to look on the bright side.

Sure, it’s a tad traumatic having to watch your side prevail in a match with the equal lowest total score this century.

But there are, after all, worse things. Not prevailing in a match with the equal lowest total score this century, for instance.

And apparently the second term marked the first time since 1996 that two sides have only managed three points or fewer between them in a single quarter – so that’s at least one mid-to-late-’90s drought we’ve managed to break.

And moreover, this weekend actually marked a significant milestone in Adelaide football fandom circa 2019.

For in this odd, godforsaken season, this was actually the first weekend all year in which the Crows have won and Port have lost.

And when you throw in the fact that Carlton got taken apart by the side that was hitherto on the bottom of the ladder, well, that has to be a pretty fine weekend.

For we must now put it all to one side – even the fact that, despite all the hype about their premiership-contending 2019 form, we have now leapfrogged the Power on the ladder (while still remaining in strong contention for a top-two draft pick).

Because on Saturday comes the Showdown. 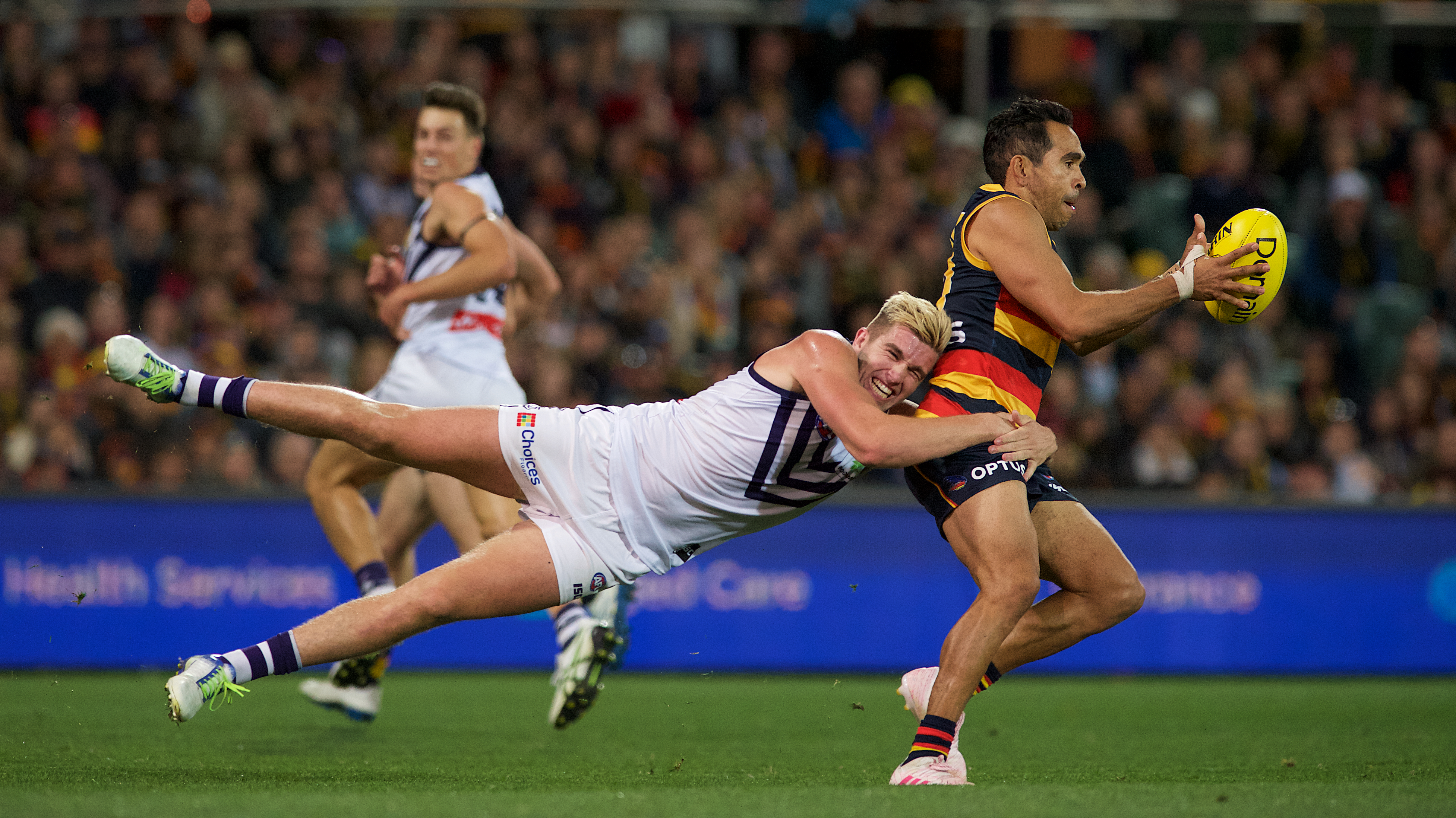 And while there were good omens across the weekend – the Port Magpies kicked a total of 119 points in their win over Centrals, the Reds netted their A-League winner in the 119th minute of last night’s final and the Power were, y’know, Not Good – it’s probably wise not to get carried away.

Because while our dour theatrics may have (just) been enough to overcome a Fremantle side evidently instilled with the Ross Lyon creed that kicking goals equates to needless showboating, we may need something several levels beyond that to account for Port’s pace and newfound occasional competence.

As for my son, he at least greeted the final siren with a cheery gesture of optimism, noting that he had now attended three games of AFL for three Crows wins (no mean feat considering his first two appearances came during the late-unlamented 2018 season).

With that sort of glass-half-full attitude, I’m not quite sure how he’s descended from the Fumbles lineage, to be quite honest.

Indeed, it’s possible he’s some kind of football talisman; a lucky charm that I should ensure attends every game possible in order to exploit his perfect attendance-record-to-victory ratio.

After all, having a glass-half-full can make a refreshing change to the usual half-full glass.

Unfortunately though, he’s opted for soccer instead this term.

At least that way he’s a chance to see a few goals scored.