I like to think I am, to most intents and purposes, a fairly normal sort of individual.

I also, obviously, follow the football, which is also a fairly common pastime for many, if not most, Australians. Perfectly normal.

It has come to my attention (and yours, presumably, if you’re not a first-time reader) that the way in which I follow football is – perhaps – somewhat strange.

I mean, a sensible thing to do would be to have a team that you support, try and watch or even get along to their games every week or two (or three, if you’re particularly normal), enjoy it when they win, shrug when they lose and then get on with life.

Whereas what we tend to do here in Fumbleland is this:

I have a team that I support, and whose games are a non-negotiable commitment. An entire thesis on seething despair-filled rage could still not distil the look that crosses my wife’s face when she’ll ask something like ‘Are we free on May 18 for a family reunion?’ and I’ll reach for my phone, open the Outlook calendar and shake my head, ‘Ah no, unfortunately we’re playing Brisbane at the Gabba that day between 2 and 5pm – are they free in October?’

(In actual fact May 18 is now federal election day anyway, another event that’s also looking like being a lot closer and less predictable than you’d have expected a few months ago.)

This in itself may not constitute too radical a departure from normalcy – but that it is the mere tip of the iceberg.

It would be one thing if my weekly emotional wellbeing was shaped, in part at least, by 44 complete strangers chasing a cow-hide ball around a field.

But in truth, the euphoria from an Adelaide victory is a shortlived fix that is soon lost amid the inevitable understanding that there have been many, many wins of varying quality over the last 21 years, none of which ultimately mean a great deal in the broader scheme of things unless they end up being roadsigns on the pathway to a premiership. Which they aren’t. 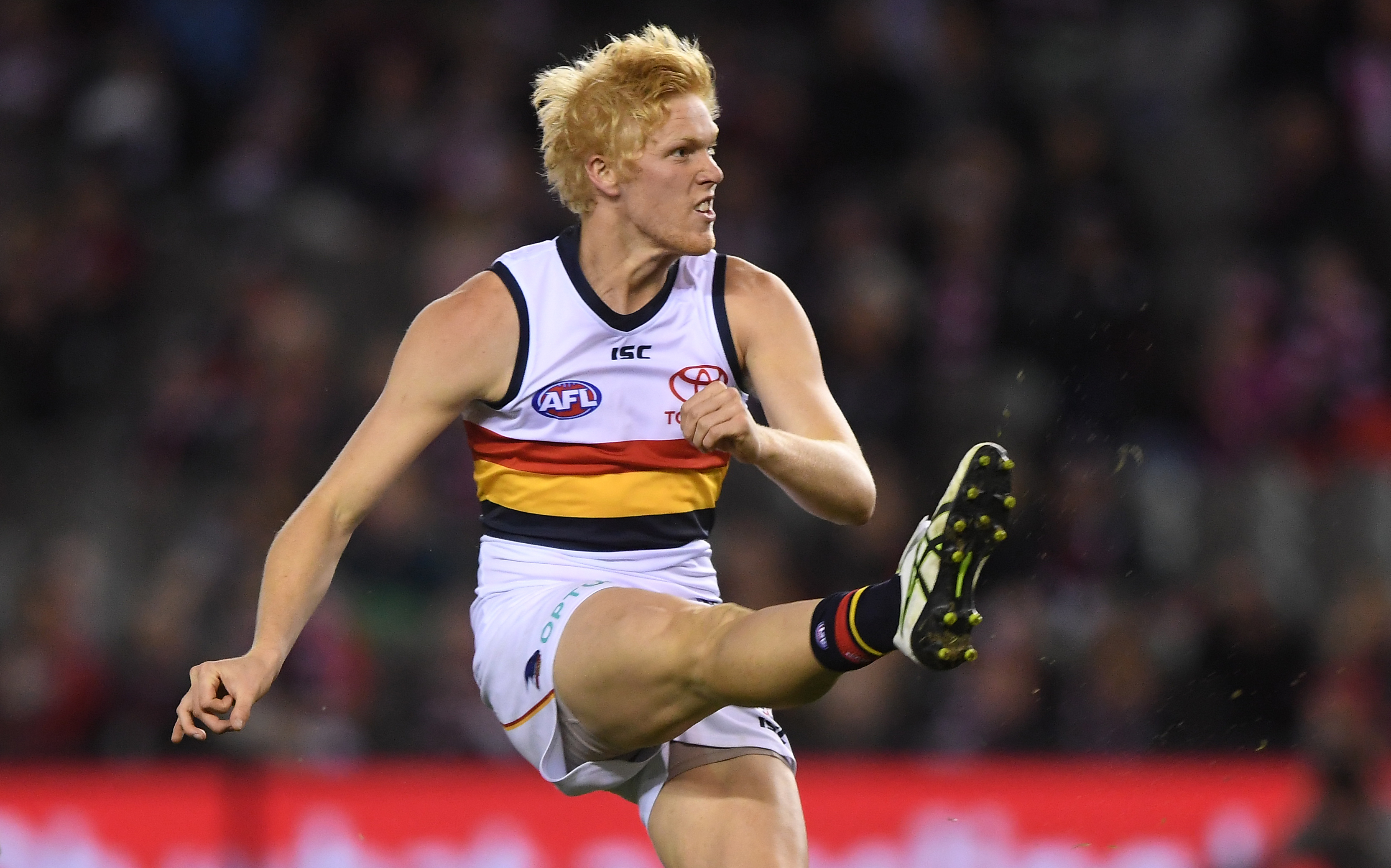 Ok sure, if you’d asked me a month or two ago I wouldn’t have considered beating St Kilda in Round 6 as too big a deal; but we did and it was, so that’s good I guess.

And true, there are reasons to be optimistic – not merely the win, or the manner of it, but some of the players on whom it was forged.

Keath and Greenwood, for instance (neither of whom, ironically, are even remotely ‘category B’).

The return of Greenwood has given the forward-line some of the aerial dynamism it’s lacked since the departure of McGovern, while Alex Keath (did you know he used to play cricket? No-one ever mentions it at all for some reason) has become the latest answer to the perpetual question ‘Who’s going to replace Bock/Davis/Lever/Doedee etc in the backline?’ 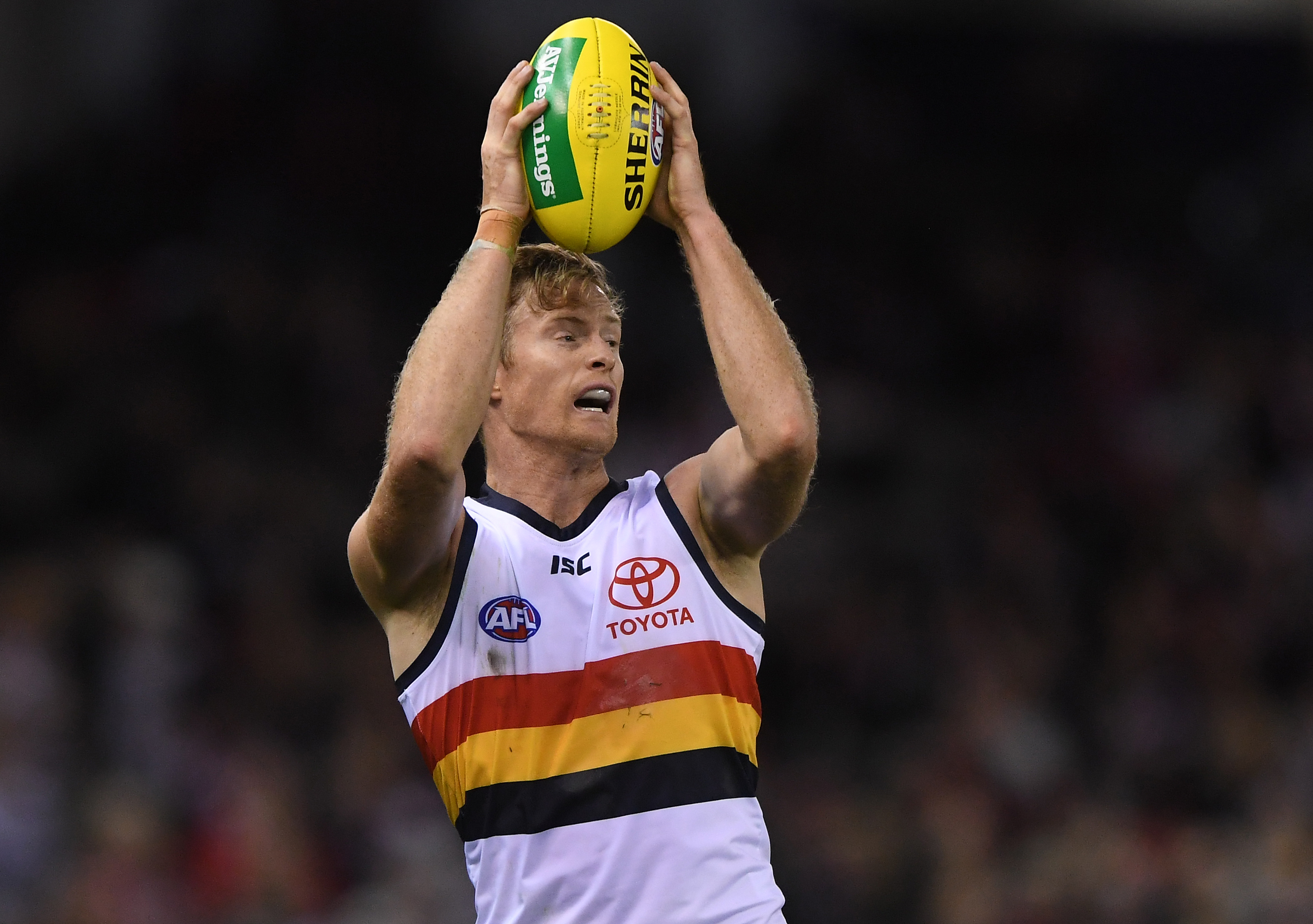 Elliott Himmelberg, in his third senior outing, grew into the game, ensuring it was a bad week for Josh Jenkins to publicly spit the dummy.

The young forward fulfilled the JJ role to perfection, even emulating his obligatory knack for missing a sitter from point-blank range.

For the second week in a row, young, defensive rookie forward Lachie Murphy impressed with his desperation and a hat-trick of goals along with it, giving us a distinct End-Of-Robocop vibe:

And happily, for the second week running we even added some scoreboard symbolism: having last week kicked 119 points in a season-defining turn, this week we managed 97 against St Kilda. 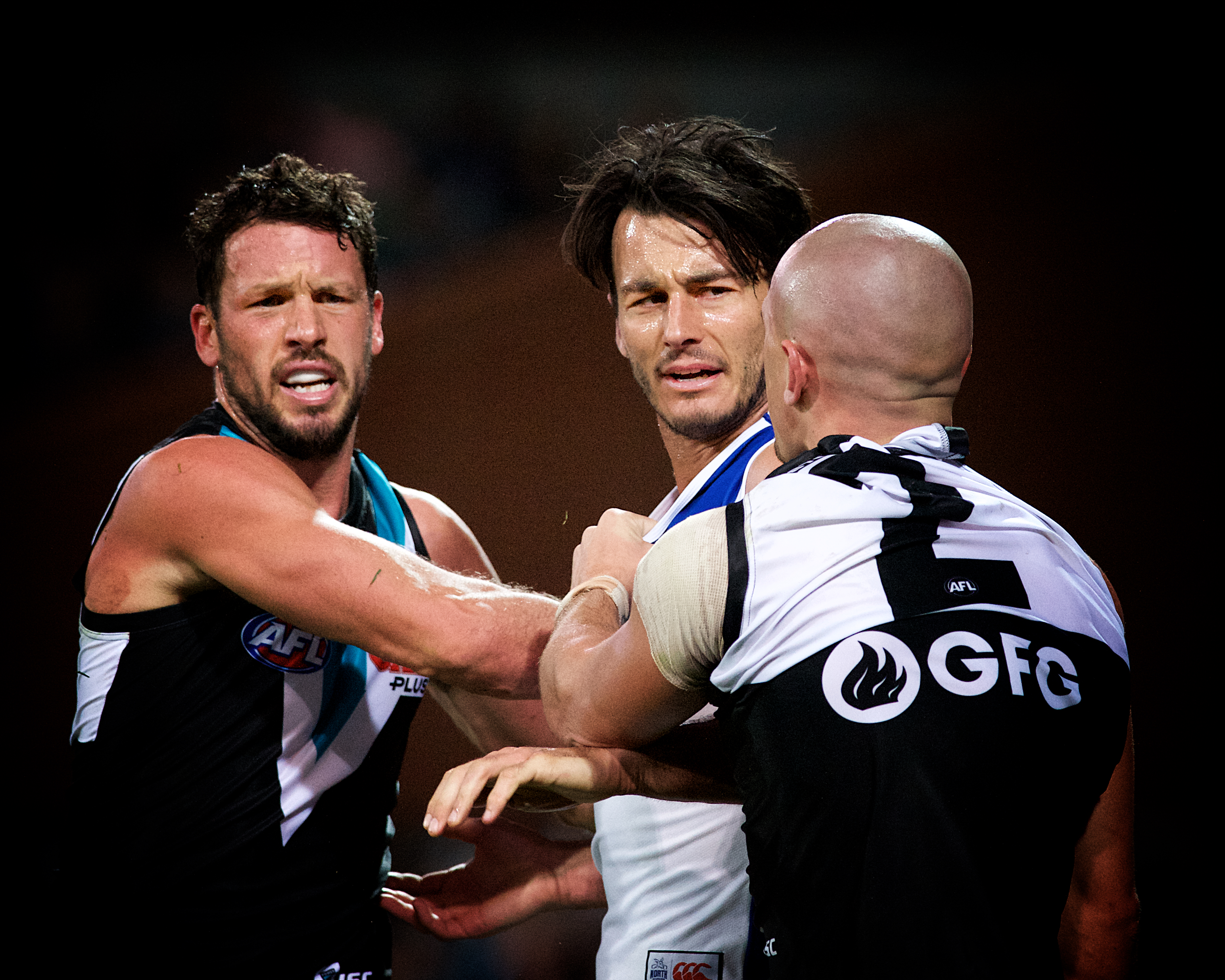 This is a similar expression to the one I had watching the Port game. Photo: Michael Errey / InDaily

Anyway, I’m not sure whether it’s part of some subconscious bid to bolster the elusive football fix, some ritualised self-flagellation or simply grim fascination, but my weekends are increasingly taken up with tracking a growing array of tenuously related contests.

First, of course, there’s Port. The yin to our yang. The Darth to our Anakin.

The thing about my perpetual Power disdain is that I’ve never really pondered where it came from.

I was late to AFL, and having spent my formative years in Brisbane I had no historical SANFL-based animosity for Port and completely missed the controversy about us thwarting their entry into the national competition.

Rather, I guess I just figured that if you live in a town with two teams, and you decide that you like one of them, logic dictates that you should dislike the other with equal passion. 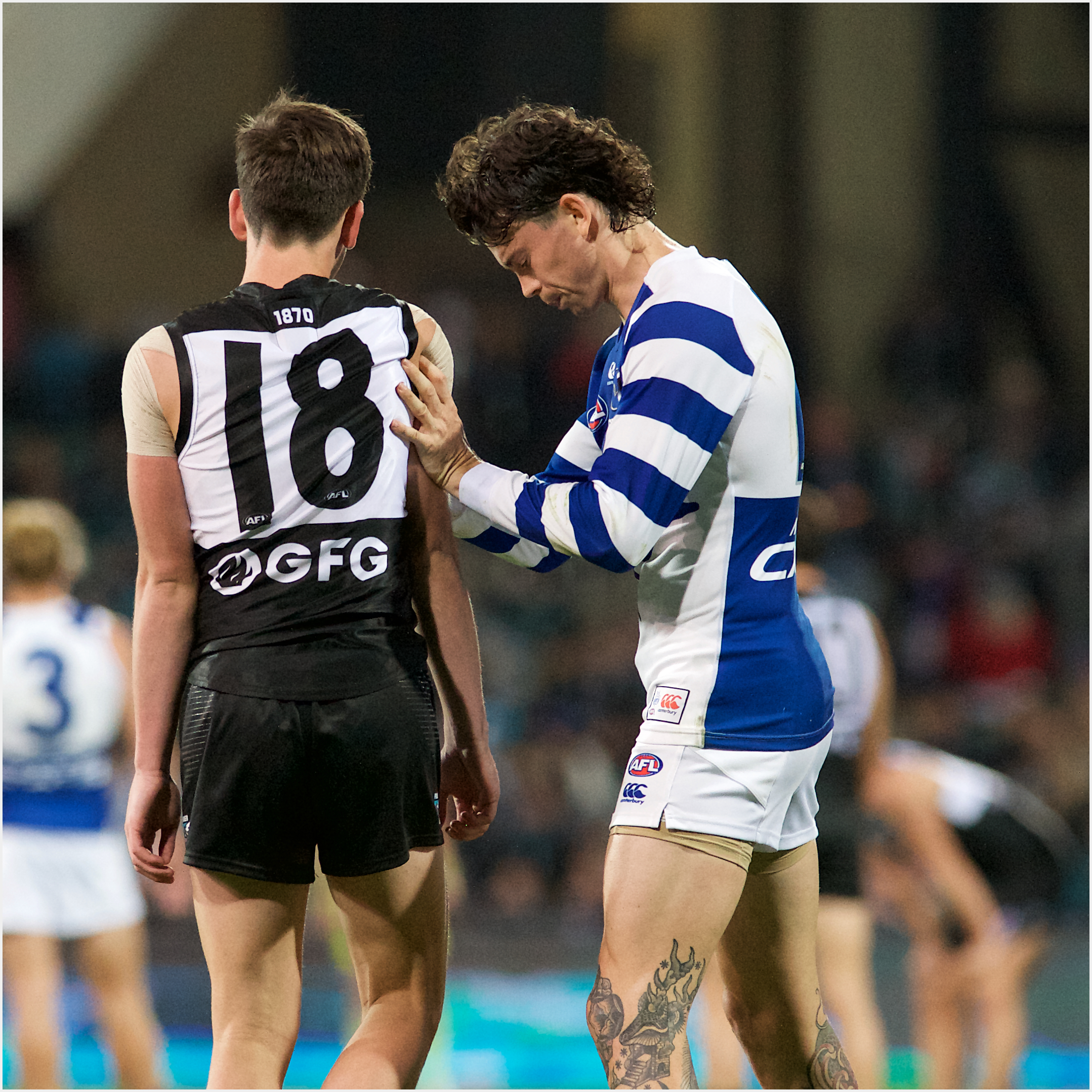 Jasper Pittard summing up my thoughts on Port Adelaide. (Pittard was subsequently fined for hitting a Power player, something he rarely managed in his time at the club.) Photo: Michael Errey / InDaily

And over the years that passion has crystallised into a sort of institutionalised animosity, to the point that I can’t really tell where the banter ends and the genuine disdain begins.

George Orwell wrote in Shooting An Elephant of a man who “wears a mask, and his face grows to fit it”, and I suspect that’s what’s happened with our collective and mutual dislike. 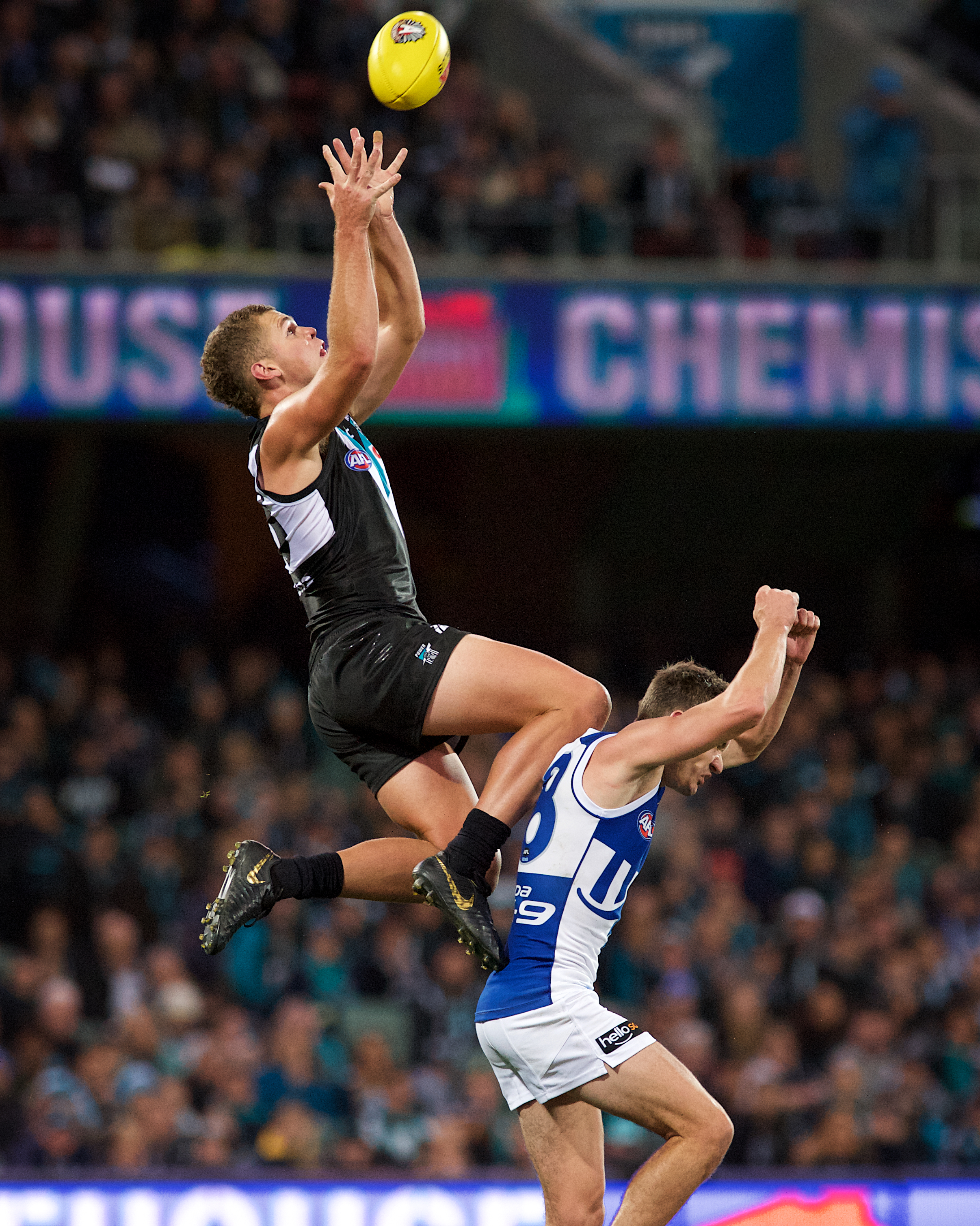 At any rate, the seething despair on my wife’s face when I inform her of a looming Crows fixture is as nought compared to the look she gets when she suggests a Friday night movie and is helpfully informed, ‘Well actually, I was kind of planning on taking a look at Port v the Kangaroos…’

Which Port won, of course. If ever there was an exercise in self-flagellation, it’s deliberately sitting down to watch (even for a moment) a match whose result is not merely objectionable, but so thoroughly predictable (the Kangaroos’ junk-time charge notwithstanding). 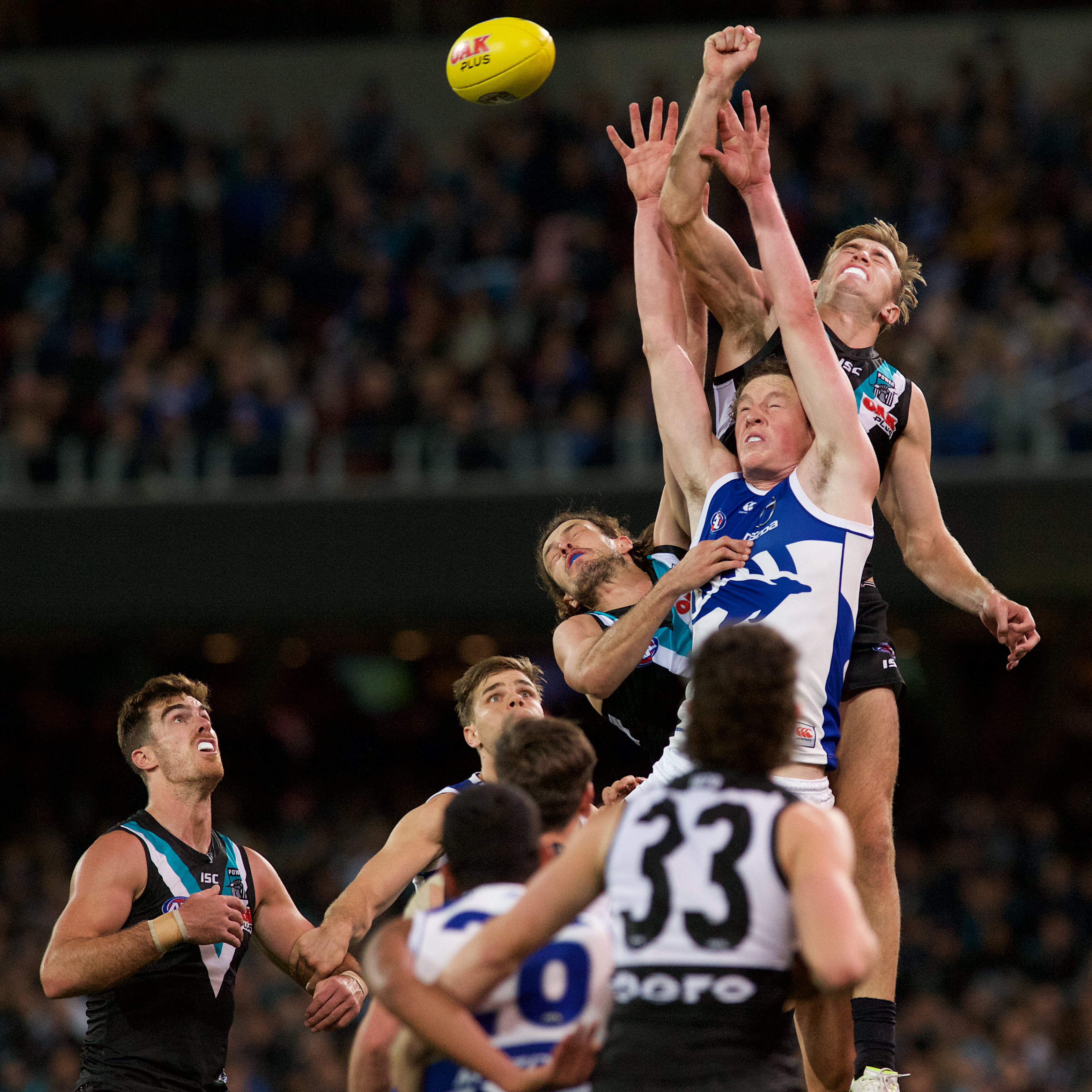 North Melbourne have been so dismal this year, you’d be hard pressed to find a team bad enough that could lose to them. Oh wait…

Still, much (including, perhaps, a wooden spoon) will hinge on their clash with Carlton this coming week. And there’s the rub.

For it’s one thing to unnaturally obsess about my own team’s peaks and troughs. Or even to follow the fortunes of our crosstown nemesis for a weekly fix of schadenfreude (or, more often of late, whatever the opposite of schadenfreude is).

But this first round draft pick swap thing with Carlton has given this entire season another layer of psychosis altogether.

For the first time ever, I am genuinely invested in how the Blues perform. And, moreover, how they don’t. 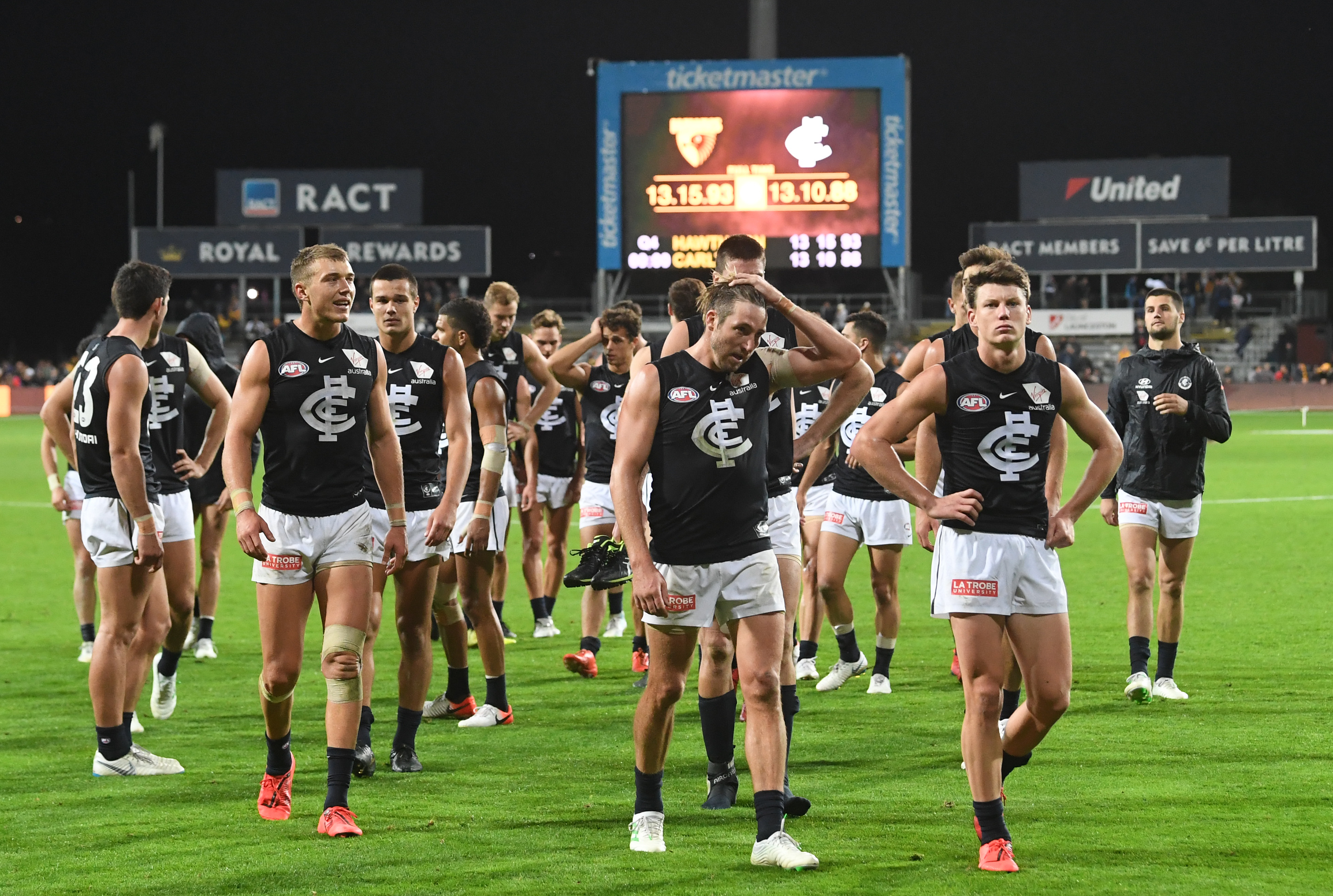 It’s like a season where you’re simultaneously trying to win a flag while tanking for draft picks – and not doing particularly well at either.

The Blues put on a particularly poor display of tanking in the first half yesterday. It was almost as if they’d forgotten how to lose.

Fortunately, it came back to them in the nick of time, and they duly capitulated to Hawthorn.

Even without the lure of Carlton’s First Round Draft Pick, though, I still would have been invested in the game to some extent, my support for one side or other ebbing and flowing depending on the player to which I felt the most resentment at any given moment out of Mitch McGovern and Jack Gunston.

Indeed, the whole principle on which I barrack – a sliding scale of resigned affection and blind animosity – has this week been effectively declared Not Normal by the AFL and its assorted media proponents, who appear to have taken a break from their usual sledging of individual players to instead tut-tut about football crowds sledging individual players.

It came to a head after the Anzac Day game when Essendon supporters’ antipathy with various dubious umpiring calls found raucous voice as Collingwood skipper Scott Pendlebury collected the medal he had duly earned, prompting Nathan Buckley to berate the crowd for “booing a champion”.

Among the various logical inconsistencies in all this is the notion, as Buckley himself later acknowledged, that a champion of the game was less deserving of boos than some hack struggling to hold their place in the side.

In fact, by and large, poor-to-average players don’t get booed, because boos are reserved for the AFL’s elite. The best of the best.

I’ve never jeered an Ablett, and certainly not a Goodes, but I’ve been known to make my feelings heard to a certain Mr P.Dangerfield, lately of Moggs Creek. 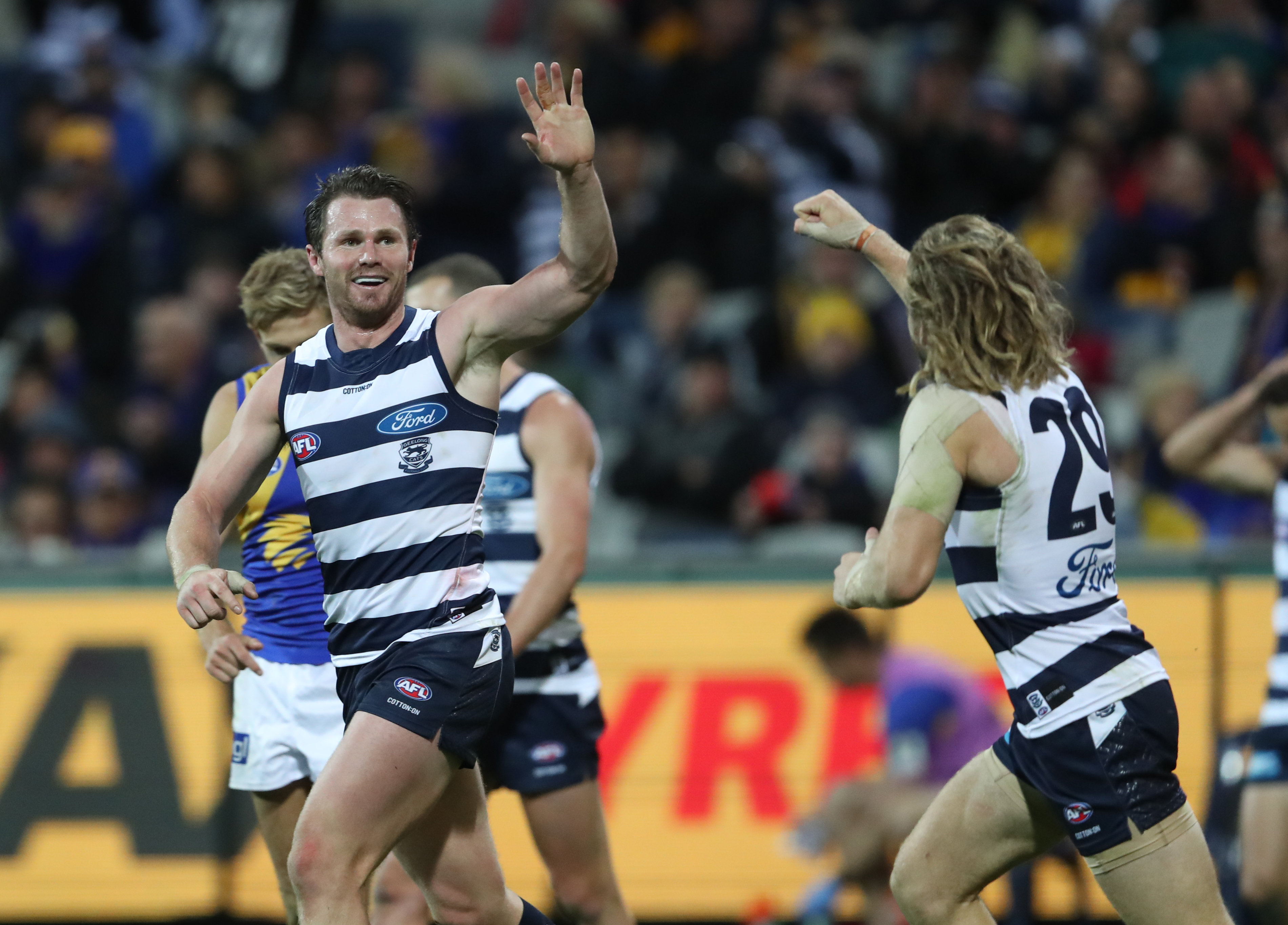 And it’s no deep-seated reflection on his ability or character (although he is quite clearly the Worst Person In The World or thereabouts). It’s merely an expression of the helpless frustration of a Relatively Normal Adelaide Crows supporter who preferred his team with a certain Mr P.Dangerfield (lately of Moggs Creek) in it.

Particularly now that Geelong are a game clear on top of the ladder after six rounds.

The fact is, some players have a tribally-assigned soundtrack.

Ricciuto’s every touch used to be accompanied by a cry of ‘Roo’ (which, in a packed stadium, was so indistinguishable from ‘Boo’ that it was potentially counter-productive, but no matter).

My favourite though, was the war-cry assigned to Carlton’s one-time cult backman Ang Christou: every time he got the ball, the crowd would simply grunt: “Woof.”

I’m sure there was a reason for it, although I have no idea what.

I only recall seeing this in person on one occasion, when the Blues towelled us up by 68 points in a lopsided elimination final in 2001. Sadly, Ang only got nine touches, so even the consolatory enjoyment of that bemusing ritual was fairly limited.

The following year, his last in the AFL, Ang played in only one winning game as Carlton won the first of their five wooden spoons.

The dubious quest for their sixth (and, consequently, our first ever Number One draft pick) is beginning to subsume almost as much of my emotional energy as our perpetually-frustrating search for a third flag or my weekly dalliance with Port Adelaide (the ‘Two and A Half Hours of Hate’, as Orwell might have called it).

And in the midst of it all this past weekend, it occurred to me that all this might not, indeed, be very Normal.

That holding decade-long grudges against random football teams because they once poached a now-long-retired B-list Adelaide player is, likewise, Perhaps Not Normal.

But then I recall that the entire Carlton fanbase used to show their affection for one of their players by collectively barking like a dog at him, and I assure myself that Normality is a relative concept in football fandom.

Like booing champion players for playing like champions, it may make no objective sense – but not much about being a football supporter does.

And that’s the fun of it.