The sun poked through the grey gloom at Adelaide Oval, an apt enough metaphor for a day that was both warm and bleak.

Two flags in three years for the Crows’ women and, perhaps more significantly, a crowd that quickly exceeded the most optimistic prognostications and then kept building until it all-but filled the stadium.

A non-paying crowd, you say (if you happen to be a pedantic, clueless arsehole), but it’s hardly a stretch to imagine it would have been this way regardless.

For the still-fledgling AFLW, this was A Moment.

In years to come, it will be talked about like the Crows’ 1991 Round One win over Hawthorn in terms of symbolism and significance.

And then there was Erin, with a performance that should have seen her chaired from the ground, rather than stretchered off it. A performance that saw her remarkably gain her second best-on-ground in a winning grand final – in a match in which she played less than three quarters. 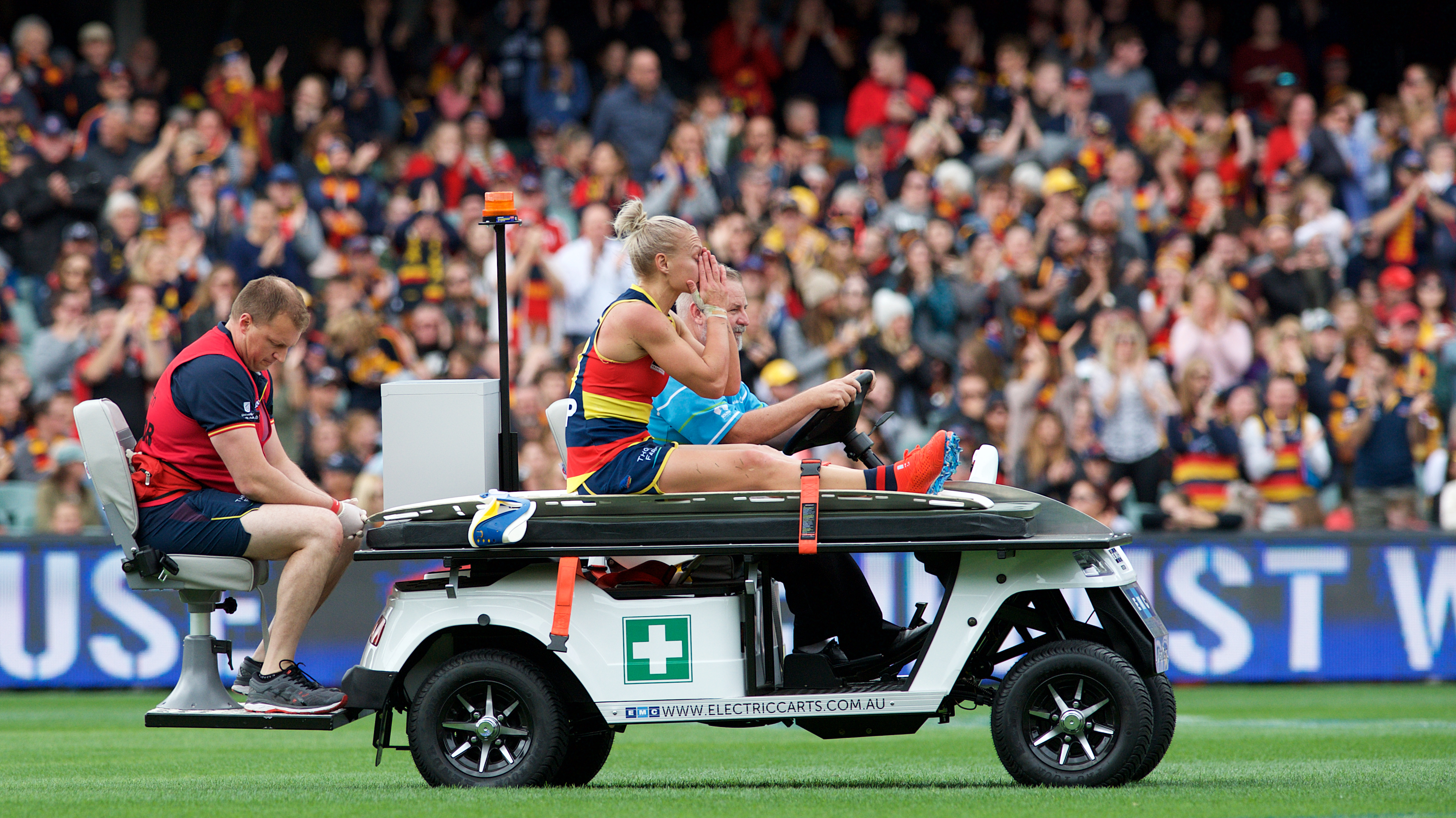 Erin Phillips wipes tears as she is stretchered off the ground. Photo: Michael Errey / InDaily

Fittingly though, the game appeared more or less done without her. A mere behind was added to the scoreboard after she left the field; true enough, the result was already in no doubt, but it was as if the remaining players on both sides collectively knew they were merely marking time from that moment on. 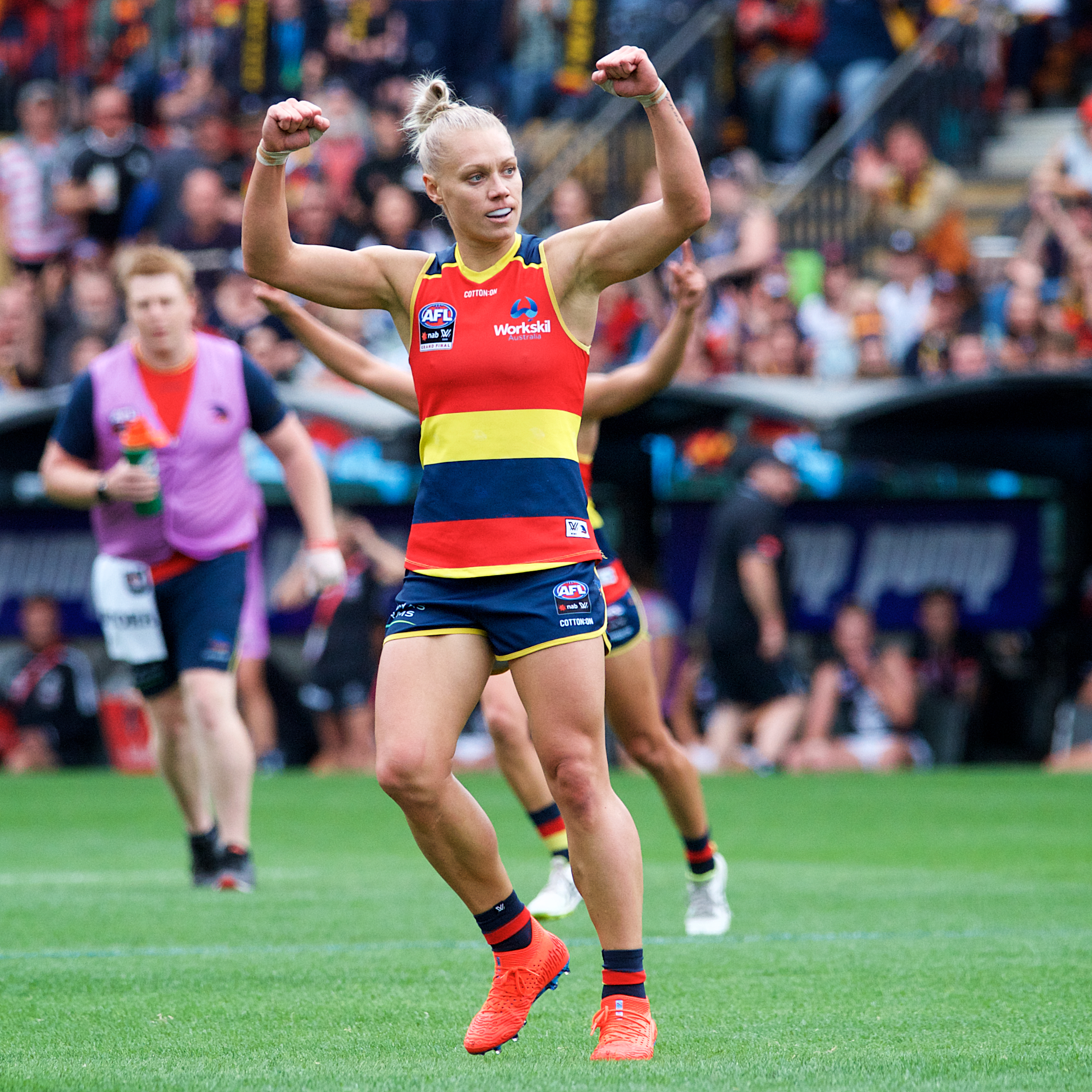 There’s not too many players whose absence effectively calls time on the whole game. I do recall things coming to a temporary standstill at the MCG in 2002 after Andy McLeod was stretchered off during the first of our four (count ‘em, four!) post-premiership preliminary final losses, but in hindsight it might only have been our side that actually stopped playing – Collingwood, as I recall, managed to run the game out fairly efficiently.

Now, I don’t know the Crows’ number 13 from a bar of soap, but there are plenty of reasons to love her.
The fact she’s born into Port Adelaide royalty, but has still won two flags and two Norm Smiths for the Adelaide Football Club is a case in point. 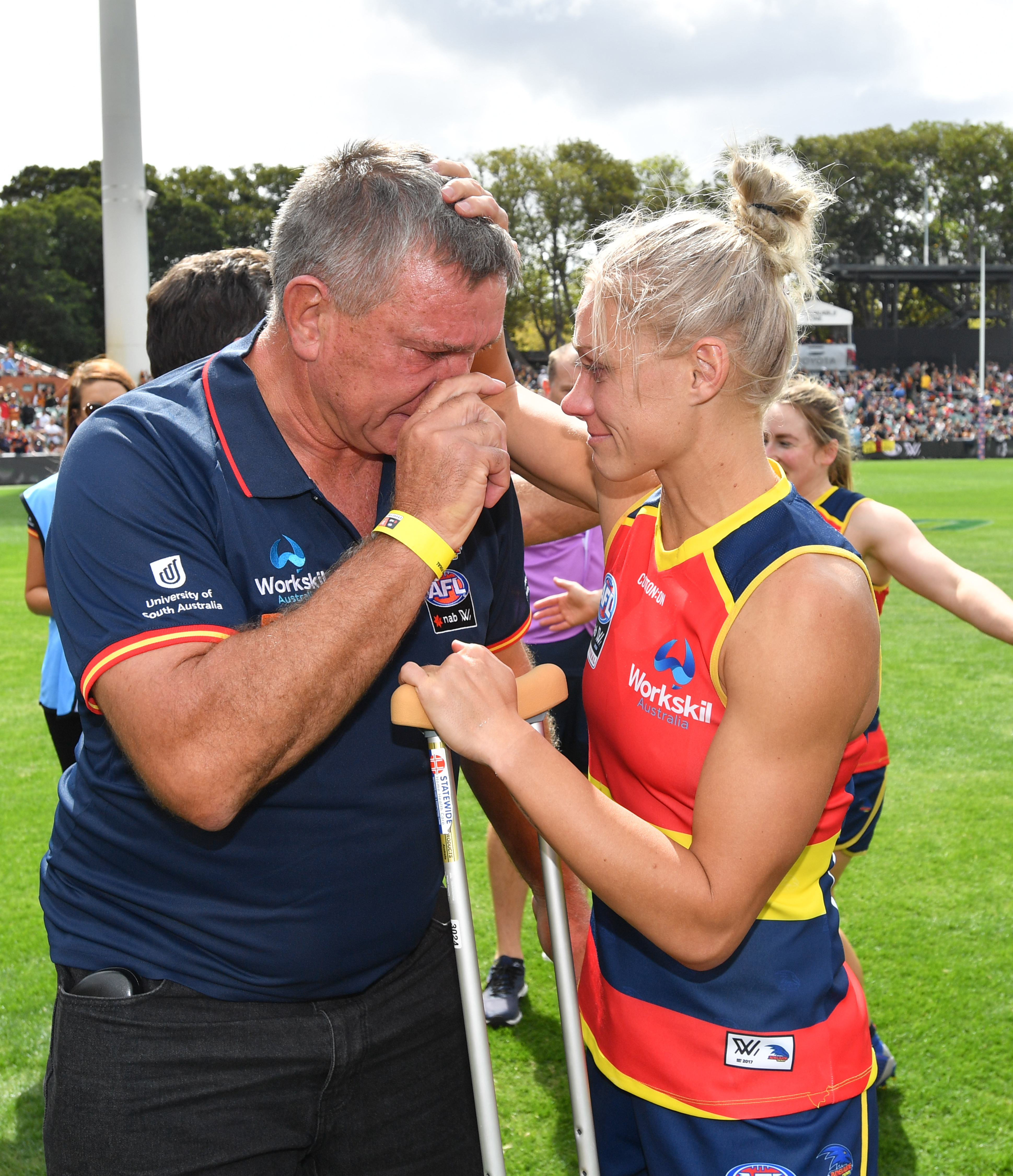 To add to the folklore of a day best described by coach Matthew Clarke as “bittersweet”, Chloe Scheer was also helped from the field with an ACL injury – having recovered from the same injury in 2017 – just seconds after providing perhaps the match’s standout moment.

I’ve seen plenty of injuries in Grand Finals but none that seemed to cast such a pall over the post-match celebrations. Perhaps it’s a symptom of the fact the AFLW is as yet semi-professional, and its annual window shorter – so there are real-world consequences of long-term injury beyond the standard stint on the sidelines, and at the end of it all you could easily miss the window anyway. 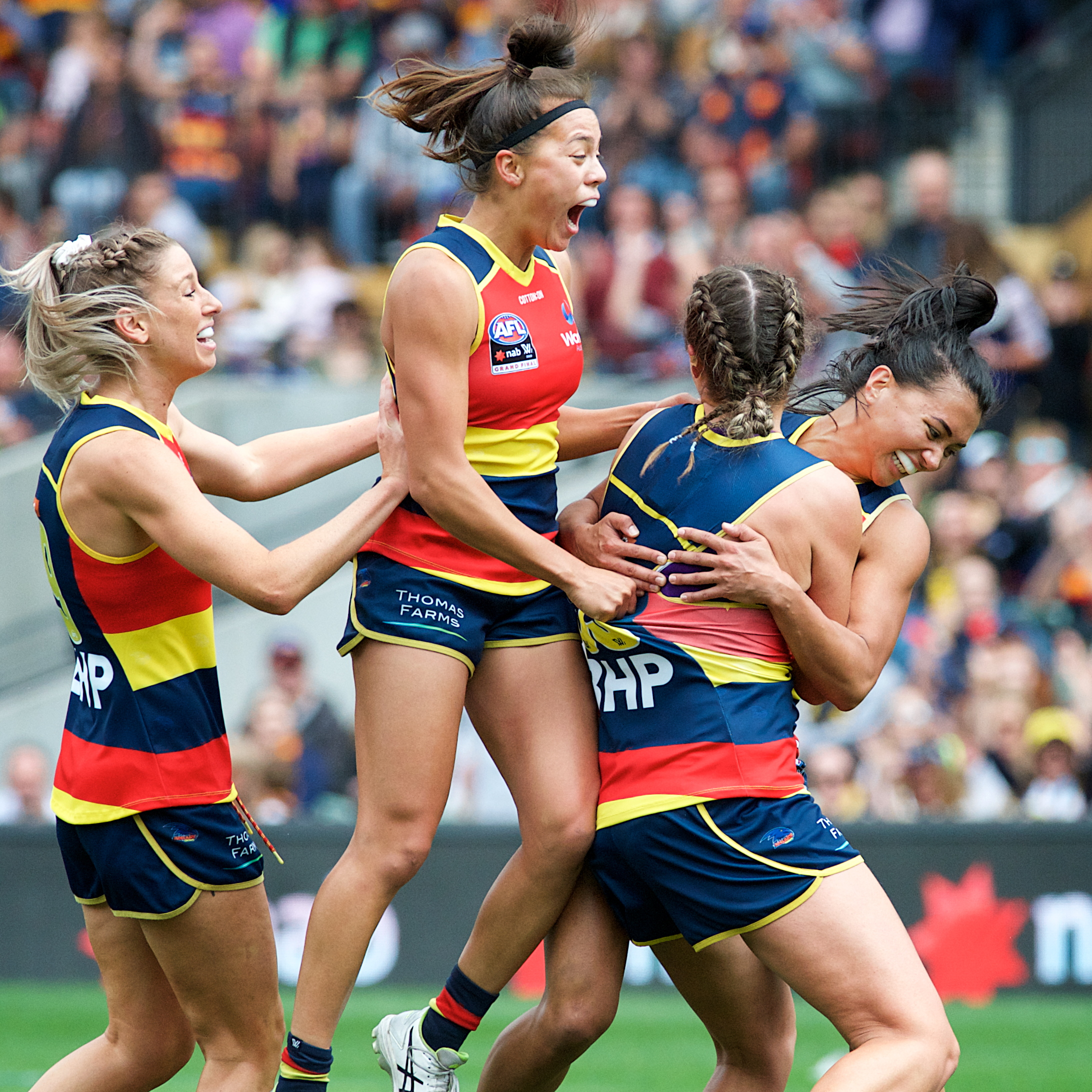 Now, I’m not superstitious, but I do have one pertinent query from all of this: what kind of masochistic football club makes a point of ensuring its captain wears the single most unlucky number in the western world?

Because it’s clearly part of the design.

As co-captain, Phillips shares her number 13 with Tex Walker, whose captaincy sort of took everyone by surprise when it was first announced by the late Phil Walsh back in 2015.

Plenty has happened since that moment, and it has somehow conspired to make Tex among the most maligned figures in the AFL.

Why, however, appears a more vexed question. 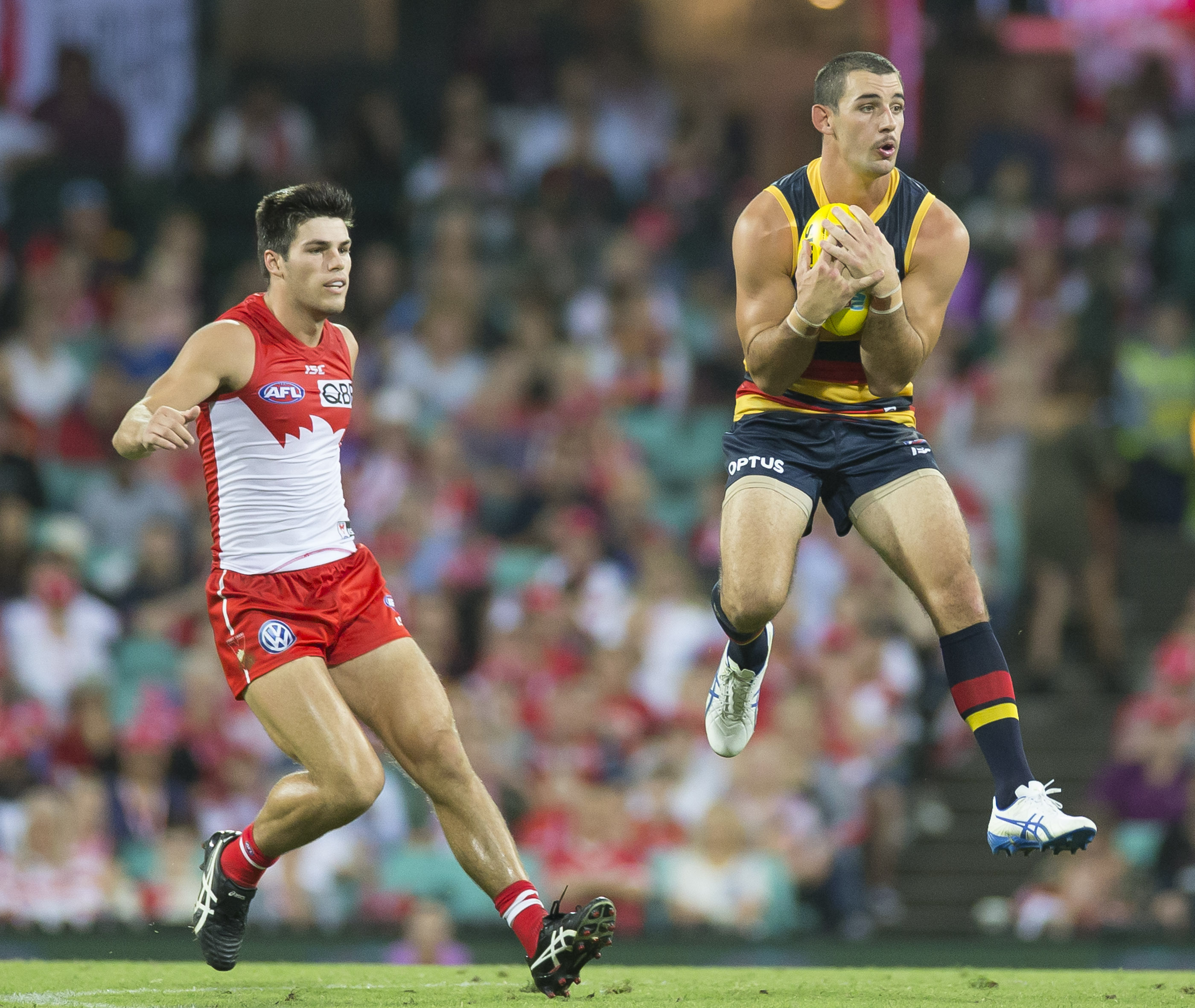 There are few current players who seem to so divide footballing opinion.

Back in the days when Neil Craig refused to play his young upstart key forward, Tex was seen by supporters as an unfairly-slighted saviour, a ragamuffin-hearted kid who might, finally, fill the key forward vacuum with which we’d struggled ever since Modra.

That notion seemed to take root in the 2012 season, when he kicked 63 goals to spearhead our charge to the preliminary final – in which he kicked four imperious goals (as did another guy whose name we can’t quite recall around Fumbleland these days). 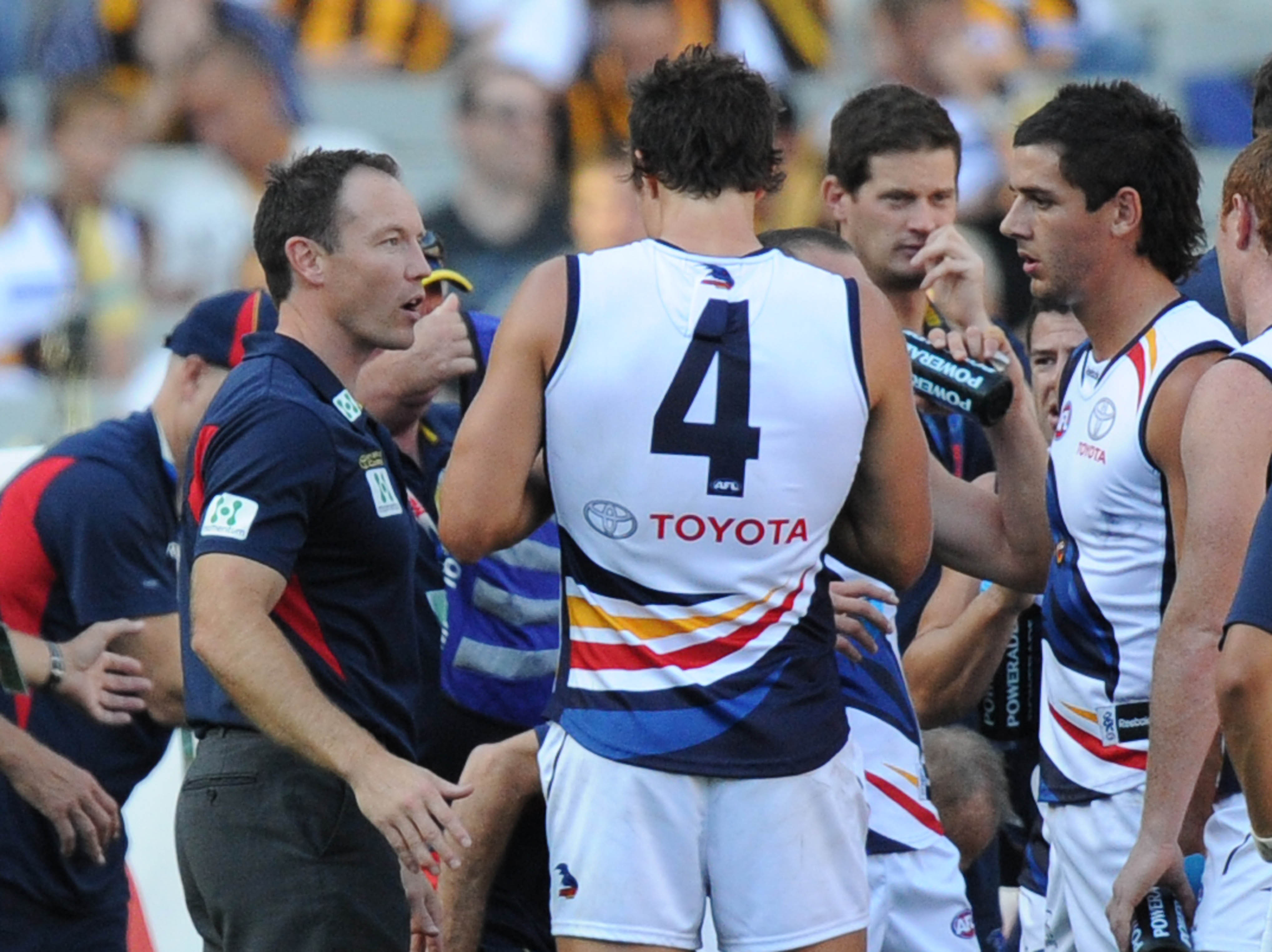 And he’s effectively been our barometer ever since, for better or worse. 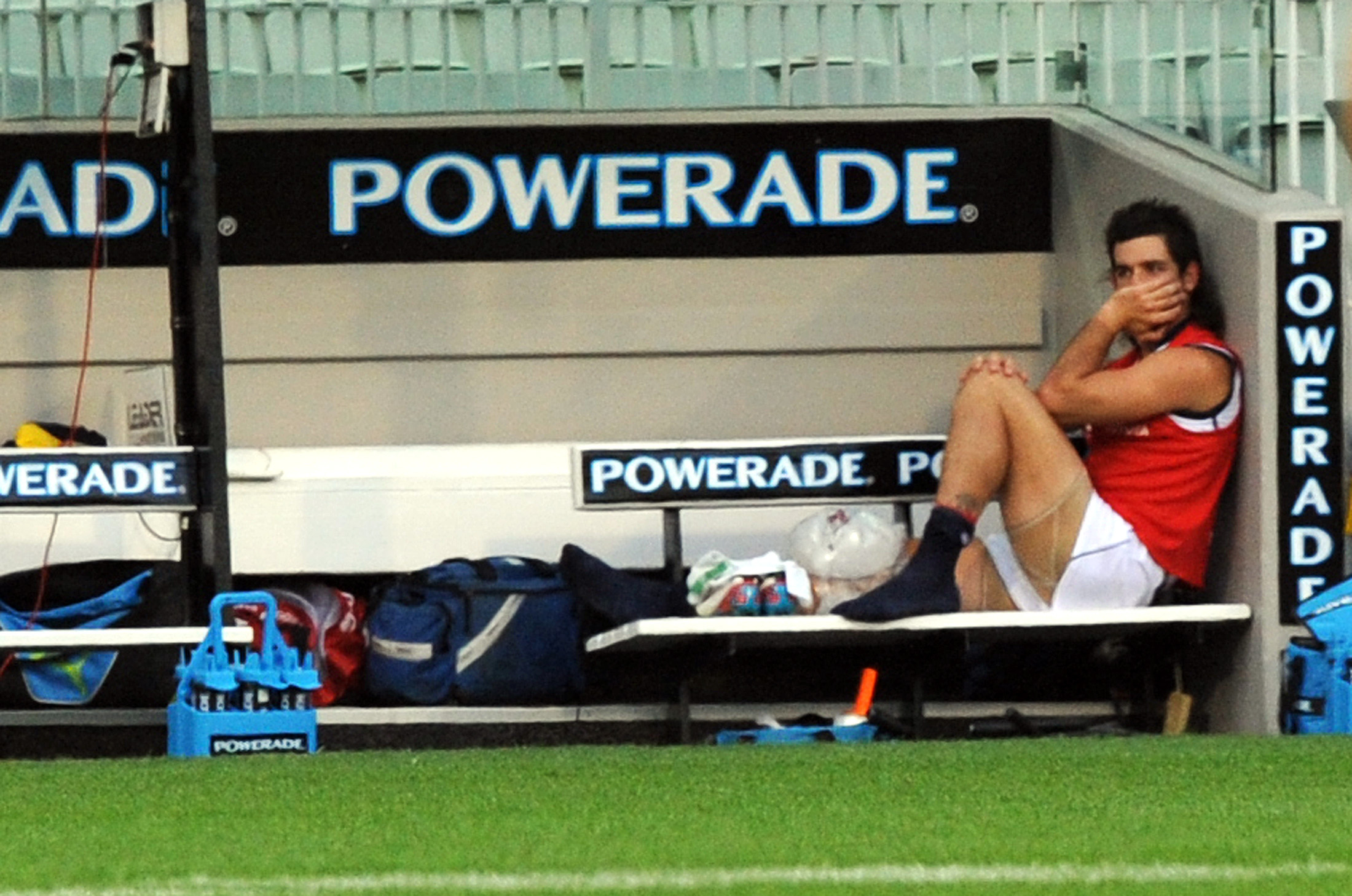 A disconsolate Tex after he wrecked his knee at the MCG; like his fellow Number 13, Erin Phillips, it was against Carlton. Photo: Joe Castro / AAP

Statistically though, that highwatermark 2012 season is something of an outlier.

In the three seasons since in which he’s managed to play 23 games, he never reached the same goalkicking heights, but increased the rest of his output as he slimmed down, toned up and shifted further up the ground, with 326 touches in 2015, 332 the year after and 342 in the Grand Final year (not many of them in the actual Grand Final of course, sadly).

But then, Tex’s output is generally measured not by numbers but by something less tangible – presence.

That, perhaps, might explain why memories of that 22-year-old larrikin with the ridiculous mullet performing his late-lamented trademark ‘teapot’ goal celebration still inspire a silent wistful sigh among the faithful. 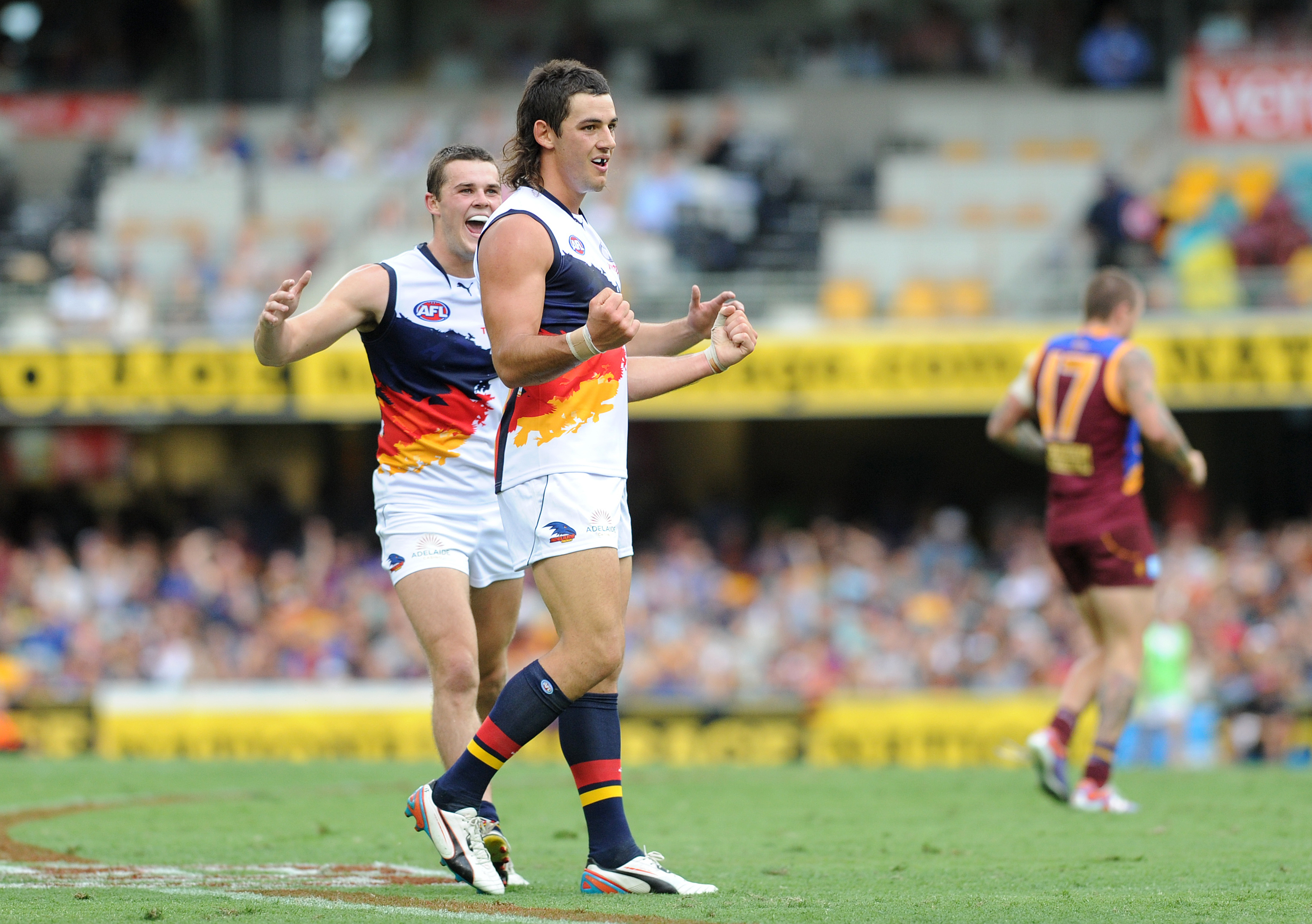 So why has he become such a lightning rod for antipathy?

Neutral supporters cite things like his post-Grand Final speech (to which I was fairly indifferent, and it’s not as if we didn’t know that lofty rhetoric wasn’t really Tex’s bag), or his parting shot at Jake Lever (which I liked, at least up till the point we got pantsed by Melbourne last year).

But there seems something more to it – as if for Adelaide supporters themselves, Tex has somehow come to bear the cross of our two fruitless decades.

Why? Well, like everything in Adelaide, it could just be the ever-present gap between expectation and reality.

When he strode out onto Adelaide Oval for the first time as captain, it was as some kind of colossus.

In that game, Phil Walsh’s first as coach, he had 21 kicks, 15 marks, six goals and five behinds.

It was like the arrival of some new footballing superpower.

But that doesn’t quite explain the frenzied uproar that greets his every below-par match.

What kind of masochistic football club makes a point of ensuring its captain wears the single most unlucky number in the western world?

He spent the first third of last year under a blowtorch – despite not returning fewer than two goals in any game he played before he was yanked from the side for that curious ‘mini-pre-season’.

I’ve heard him described as a poor big-game player, no doubt because of his lacklustre Grand Final, and perhaps too because of his listless effort in the Crows’ debacle against Hawthorn in 2015, when he hardly touched the ball while the Hawks built their imposing lead that ended what will forever be Adelaide’s most torrid and heartbreaking season.

But that would be to forget his three decisive goals against the Bulldogs the previous week – and that famous gallop up the wing punctuated by an assured pass to Charlie Cameron to secure a clutch finals win.

Not to mention his game-salvaging five-goal heroics against Freo in 2012, or those four goals against the Hawks the following week.

No, there is something intangible about the way Tex is perceived; something that, in truth, will probably only be resolved if he captains his side to a flag – a scenario that, I must concede, feels less and less likely.

He was widely panned (even by me a bit, to be fair) for his performance against Hawthorn in Round One, but – typically – he backed it up with an outing against the Swans regarded by some as a Best On Ground turn.

It wasn’t quite that, but he certainly cut an imposing figure on his way to his 10 kicks, six handballs and six marks.

Funny that. Because statistically his output the previous week was barely any different: eight kicks, five handballs and six marks.

The difference, again, wasn’t merely the quality of those possessions, but the way he carried himself, like an immovable presence.

Briefly, but the swagger was back; the natural ebullience of the free-wheeling, mullet-sporting 22-year old Tex that was lost to the captaincy, with its accompanying obligation to spout po-faced clichés about ‘KPIs’ and the like.

And the ghosts of Round One were temporarily banished by an away win that had me singing our praises again to anyone who would listen across the weekend.

I know I’m paranoid, but some of the commentators appeared to be preparing their excuses early in case we still manage a decent year, with constant references to our supposedly soft draw and the fact we play “seven of the next 11 games at Adelaide Oval” (newsflash, guys: we play 12 games at Adelaide Oval every year – that’s just how it works).

Still, we should probably consider selling a home game to Sydney every year or something?

There’s just something about the SCG that seems to work for Adelaide; hell, even the umpires seem to like us there.

And yet, even in that win against Sydney, the forward line – reputedly our great strength – often struggled to gel, and looks far more one-dimensional without Mitch McGovern and Charlie Cameron (who incidentally played a pivotal role in his side’s weekend win).

Still, at least McGovern plays for my nominal ‘second team’, so I still get to enjoy his work.

Carlton’s ‘other’ game at Adelaide Oval on the weekend may not have garnered as much attention, but the Blues still managed to hang on for a loss, thus doing their bit to fulfil our Cunning Plan for the 2019 draft.

It was, to be sure, fairly counter-intuitive knowing that a Port Adelaide victory was the best possible result, but in truth it was just a relief to have a game with no real downside.

And while it’s always nice to watch Port lose, I happily consoled myself with seeing their supporters get rained on instead. So all in all a solid weekend. 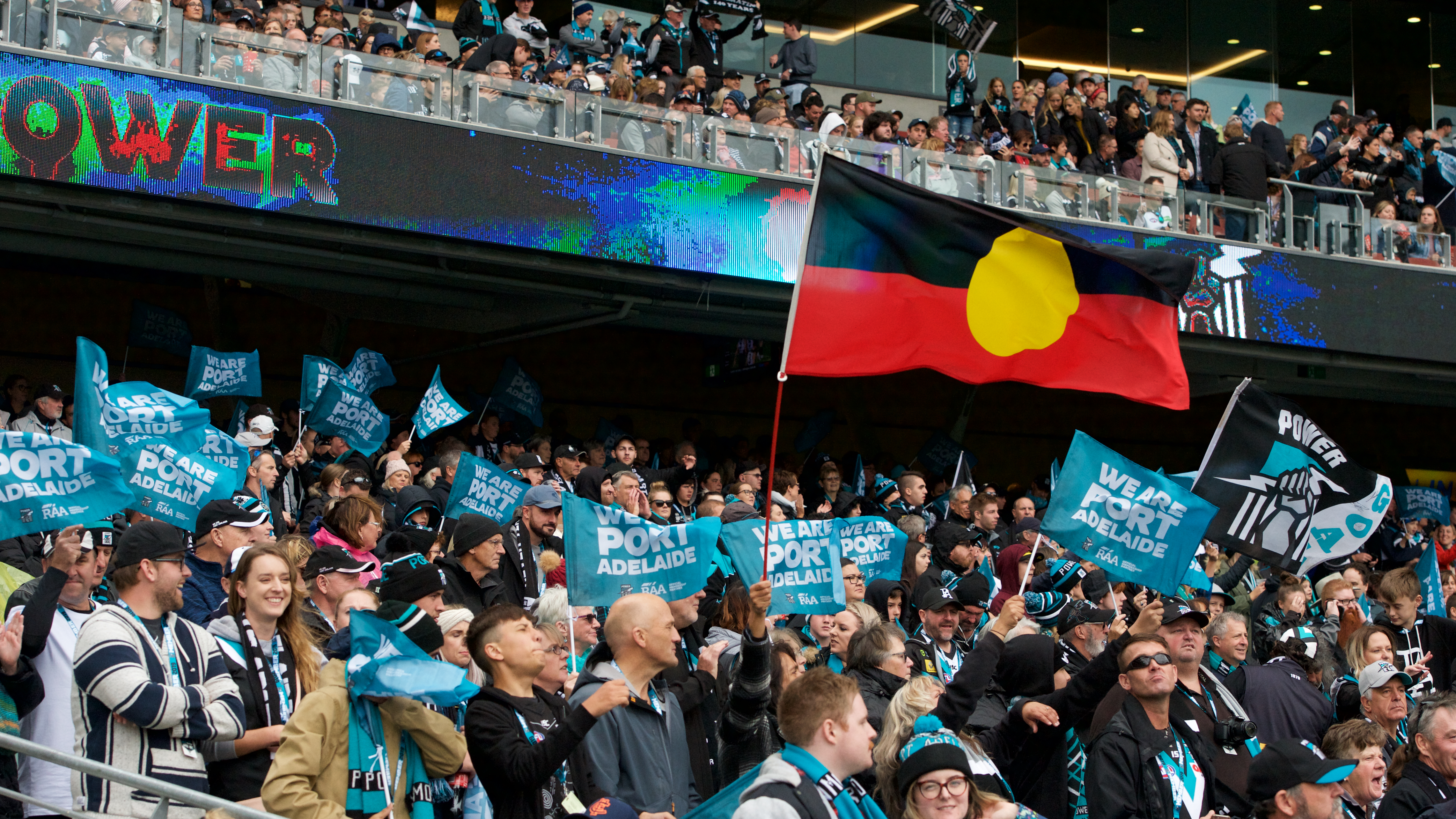 Happily, most of these guys would have got wet a bit later on. Photo: Michael Errey / InDaily

Unfortunately, though, while Carlton are obligingly luxuriating in the nether-regions of the AFL ladder, they do look like they’ll actually win some games this year (against us, presumably?) 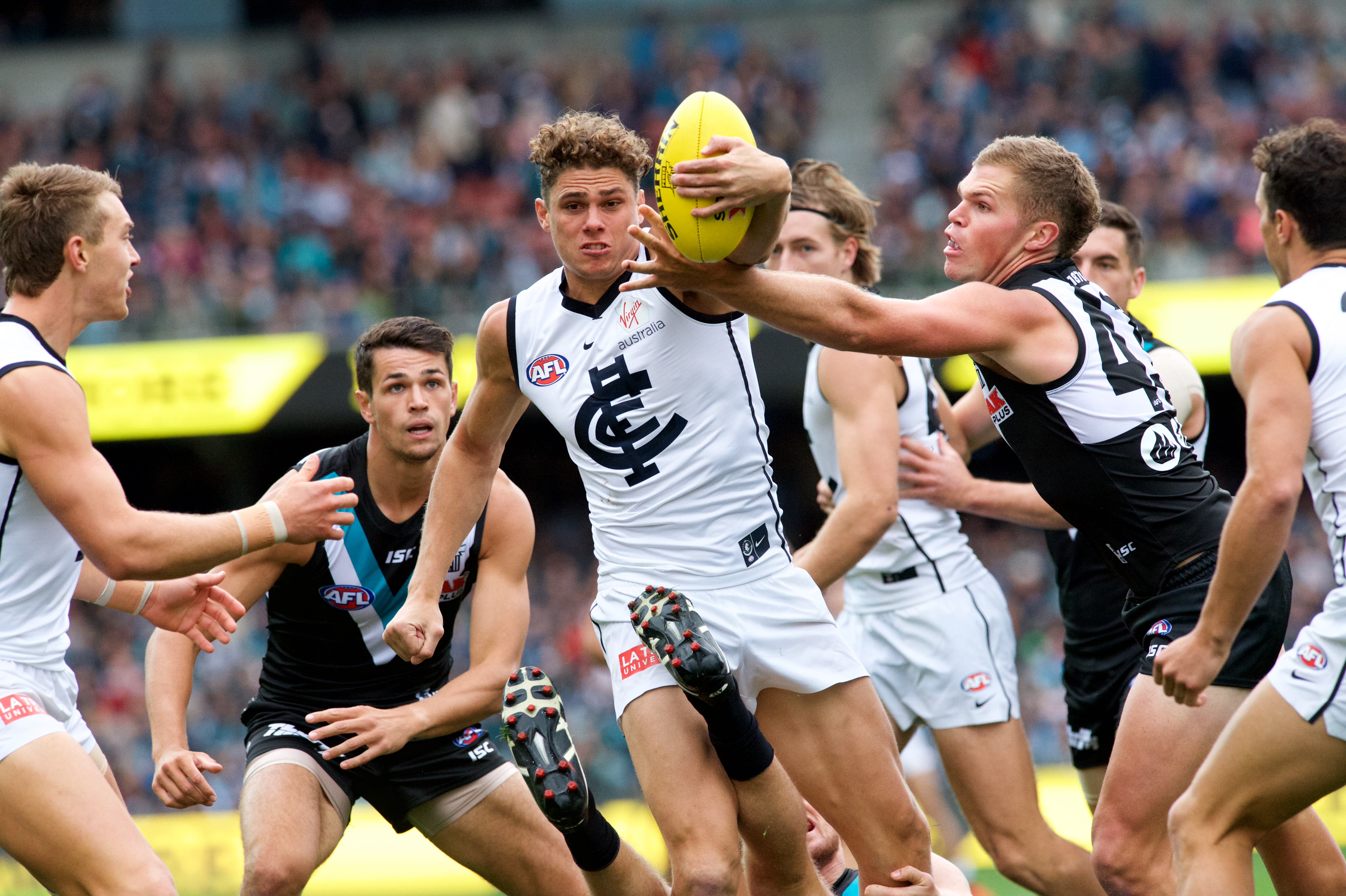 And meanwhile Port’s recruiting is thus far paying rich dividends, with the likes of Butters announcing themselves unambiguously to the competition.

Moreover, the kind of poise the kid’s shown in just two games suggests he’s going to annoy us greatly for years to come.

Sadly Jack Watts’ campaign came to a premature end, with the poor fella falling foul of a Dale Thomas tackle.

I’ll be honest, I was keenly anticipating a season’s worth of wiesn pulver gags, rather than yet another reminder that footy can be a cruel bastard of a sport.

We saw it, again, many times over on the weekend – every favourable result tinged with those dark clouds.

For Adelaide, at least, there was something to celebrate – its women’s team didn’t merely win a flag; it planted one.

And the men’s team that Tex still leads has kept its season alive, and rekindled the briefest candle of that optimism that was so quickly snuffed out the previous week. Till Thursday night, at least…

For now, again, we can believe in the possibility of hope.

We just need a bit of luck.