In fact, as far as returning to the scene of your Grand Final humiliation to face your Demons (or Tigers, as the case may be), this was more Catastrophic than Cathartic.

Sure, maybe we got just a tad carried away about playing one decent quarter after a month of lousy football. With delusions about coming home with the proverbial wet sail, instead of sinking further in the mire.

But then, we lost the Grand Final by 48 points – and only went down to Richmond on Friday by 47.

On our current improvement trajectory, we should be able to pinch a win from them at the MCG by 2066 – by which point it’s possible the home crowd will still be jeering Tex Walker.

Funnily enough, my night on the couch was fairly similar to Tex’s on the field: every time Adelaide turned the ball over, I got more boos.

Although mine was spelt differently. 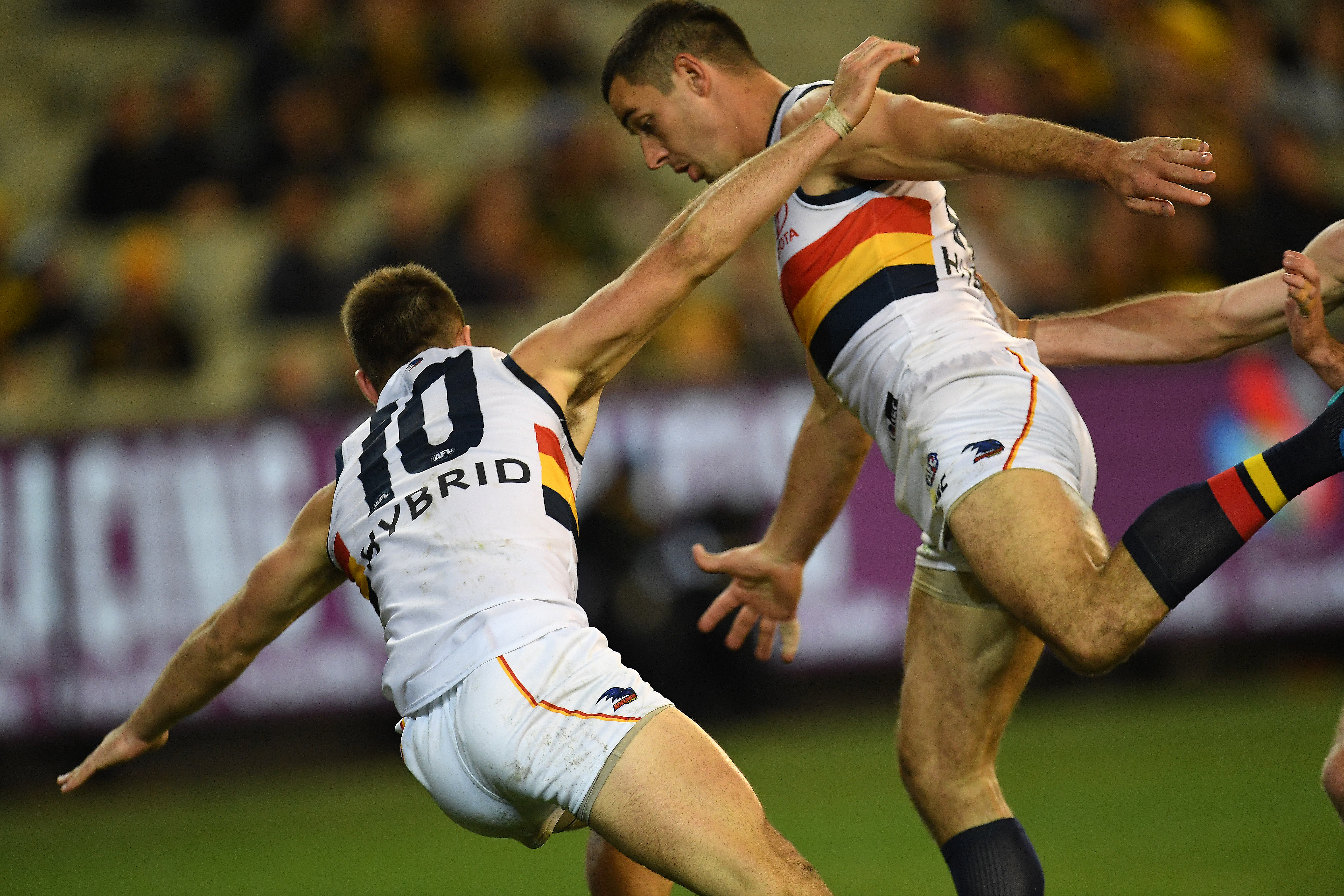 DARK COMEDY: Tex and Poholke provide a moment of comedy gold as they collide in the goalsquare instead of kicking a momentum-halting goal. Photo: Julian Smith / AAP

To be fair, my day was already ruined early, when I had to pop into the city AFL store to get a gift for my overseas brother-in-law. They helpfully had last year’s Grand Final playing on a big screen, and I fortuitously arrived just as Richmond hit the front via a Dustin Martin goal. 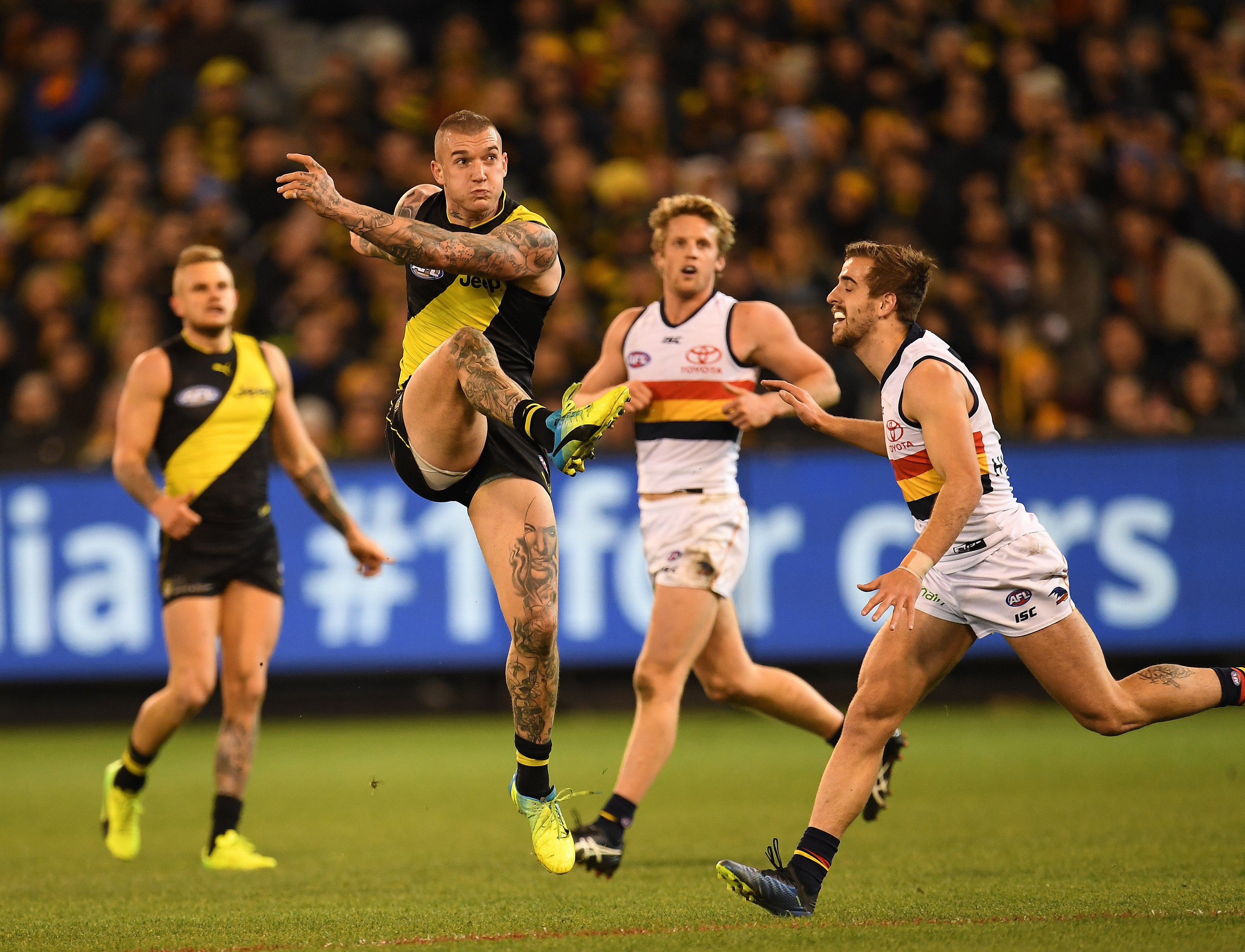 He kicked a couple on Friday too, sadly. Photo: Julian Smith / AAP

The staff behind the counter seemed to sympathise as I made my purchase and quickly skedaddled.

Still, one must look on the bright side.

At least we won’t have to play Richmond in the Grand Final this year.

And, after all, we somehow managed to pull within 16 points at the final change – a matter of some befuddlement, given the Channel 7 commentary throughout appeared to dwell on the proverbial stench of death coming off the visiting Crows side, while lauding the majesty of Richmond who, best I could surmise, are not only the most exquisitely skilled team to have ever played the game, but the nicest too.

But the narrow(ish) three-quarter-time margin was also a tad befuddling because we were actually, genuinely, Not Very Good.

How not very good?

Well, at one point Jack Riewoldt (you may remember him for his musical exploits on Grand Final day) soared above our backline for the mark of the year, missed the mark, crashed back to earth… and still managed to regain his feet, crumb the ball and kick the goal before a single Adelaide defender got near him.

The telecast cut away to the reaction of an impressed Richmond president Peggy O’Neal and CEO Brendon Gale, who appeared (if my powers of lip-reading serve me correctly) to exclaim “wow”. Although it’s unclear if that was because he was impressed by Riewoldt’s antics or surprised by the opposition’s abject lack of resistance.

Anyway, it was at about this point that I decided this was my 2018 mood: 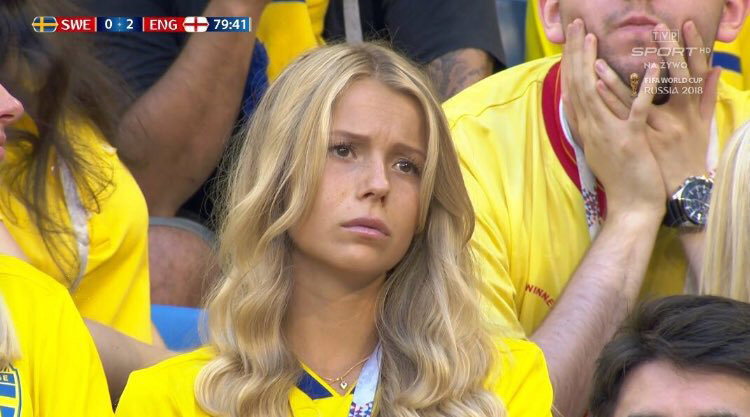 Particularly given Port duly accounted for St Kilda, in a match that was every bit as impressive and exciting as it sounds (ie not very). And that the Power – given their draw, the flakiness of third-placed West Coast and second-placed Collingwood’s mounting injury toll – are now firming for a top-two finish.

And when I think about all my club and its players have gone through over the decades to get so close last year, only to fall away again so quickly, I can’t help but feel so very, very sorry. 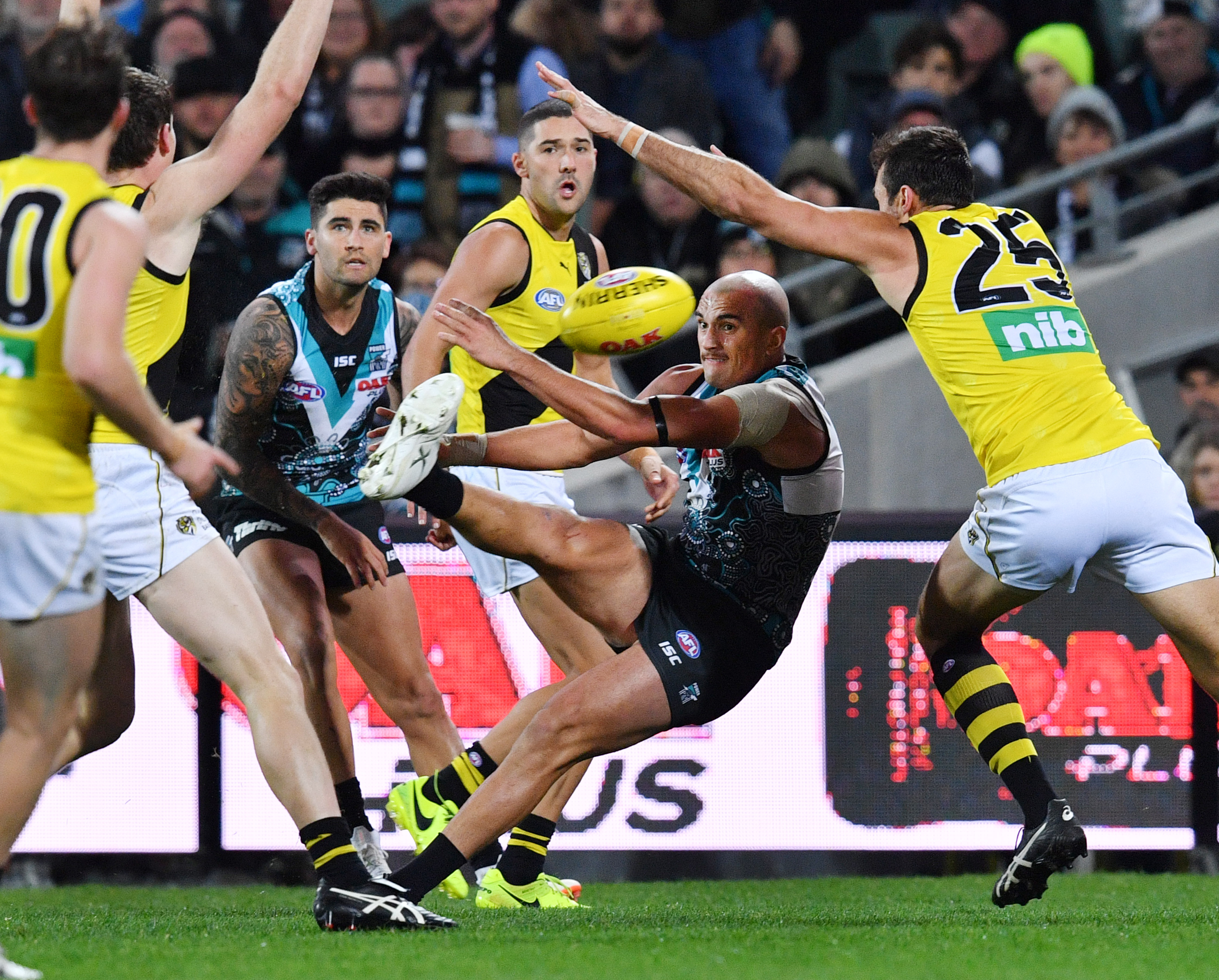 For, you see, it’s not really about them at all.

And you too, I suppose, if you’re reading this. Unless you happen to be a Port supporter and you’re just reading this for schadenfreude, in which case: 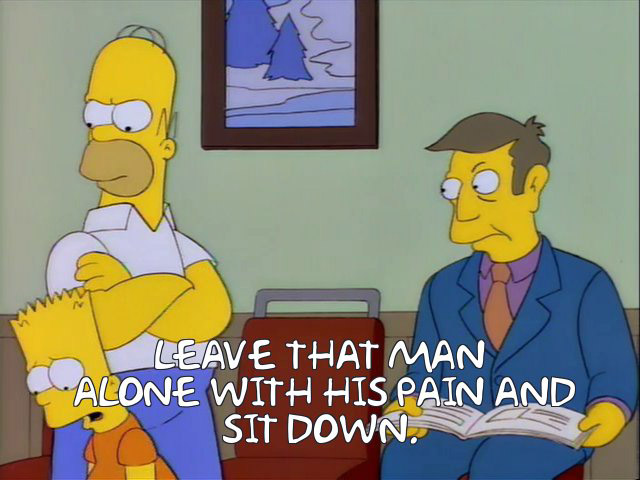 I mean, sure, the players – for whom and of whom I want better – have given their all to the cause (well, maybe not last Friday, but generally), and desperately want the club to succeed.

But that’s their vocation, and they’re paid to do it.

But given their age and demographic profile, it’s unlikely many of them have suffered through 20 years of futile endeavour in quite the same way as their average middle-aged supporter. 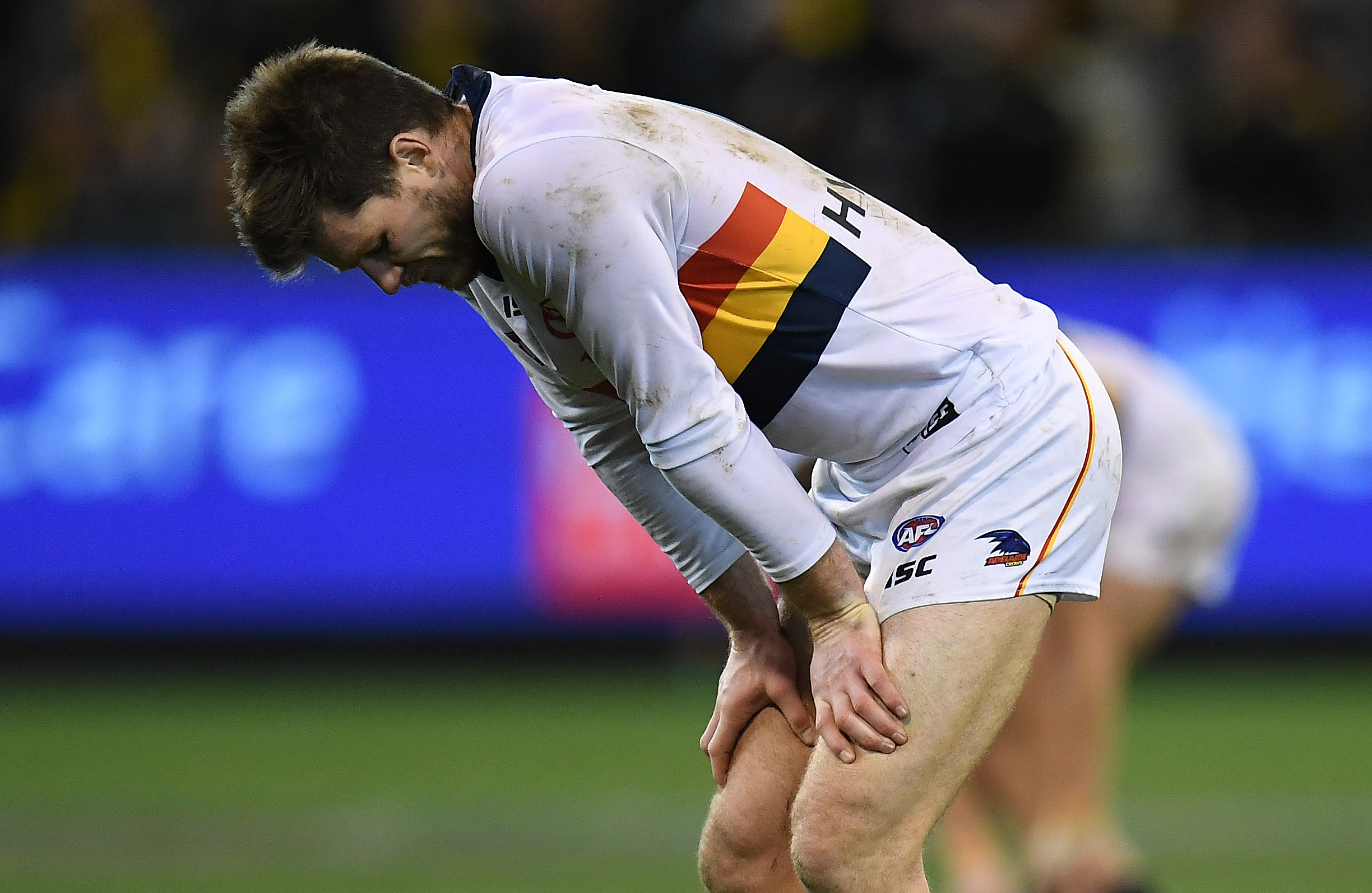 They certainly weren’t, for instance, driving eight hours to Melbourne in 2002 for a semi-final against the Demons that should have been played in Adelaide in the first place, and then driving back again a week later for the first of our impressive collection of preliminary finals losses this millennium.

Not for them the years of piling onto the Footy Express for the Bus-ride of Shame back up Port Road after another homeground defeat. 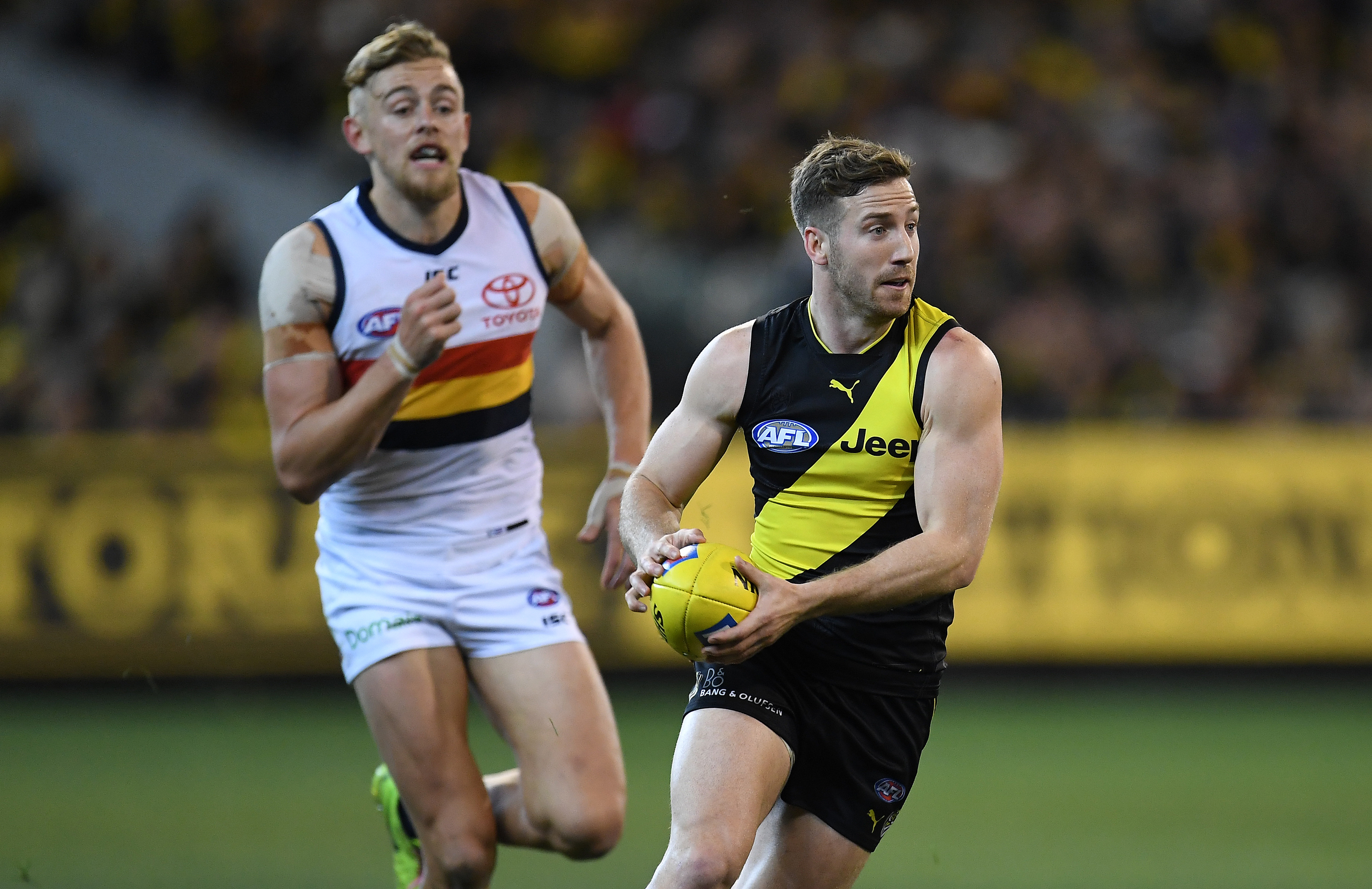 Symbolically and literally, the Crows couldn’t keep up with the pacesetters on Friday. Photo: Julian Smith / AAP

For you see, a little over 20 years ago, I made an odd and largely regrettable life decision.

After spending most of my adolescence with (at best) a disdainful tolerance of AFL football, I suddenly embraced it with the fervour of a convert, and set about making up for lost time.

In the years since, on the average weekend I’d have watched not only the fixtured Crows game, but as many more besides as I can feasibly manage without tempting divorce. Countless cracks of time in the days between have been spent pondering the mysteries and miseries of the AFL ladder, or ruefully reflecting on what might have been had, say, Rutten not given away that free against Jack Anthony, or if McGovern and Douglas had gang-tackled Motlop instead of knocking each other over, or various other historical agonies.

And watching countless hours of TV shows in which middle-aged guys talk about football – none of which makes any difference to how my team will eventually acquit itself, but it helps to fill the annoying gaps between play.

And all of which is done furtively, diplomatically; for, as Nick Hornby wrote in Fever Pitch, if we told the truth, we’d be unable to maintain relationships with anyone from the real world.

And at times like this, it’s worth pondering why one would adopt a sport and a team with which one has no particular connection, and suddenly spend the rest of your natural life riding their waxing and waning fortunes and misfortunes as if they were your own.

If I were to tally up all of the above, it’s likely I’ve spent somewhere north of 16,000 hours either watching, writing or otherwise obsessing about football since the Crows last won a flag.

That’s somewhere in the vicinity of two entire years out of the last 20.

Why do we invest all this time in something that objectively really doesn’t affect us at all? Especially those of us who did not much grow up with sport, and who were not, as it were, sporty?

I could have spent that two years doing so many other more useful things.

But it’s possible too that none of those things would have unleashed the kind of unalloyed (and, clearly futile) joy that you get from wins like the one we had last week against West Coast, even knowing that it probably wasn’t enough to save our season. 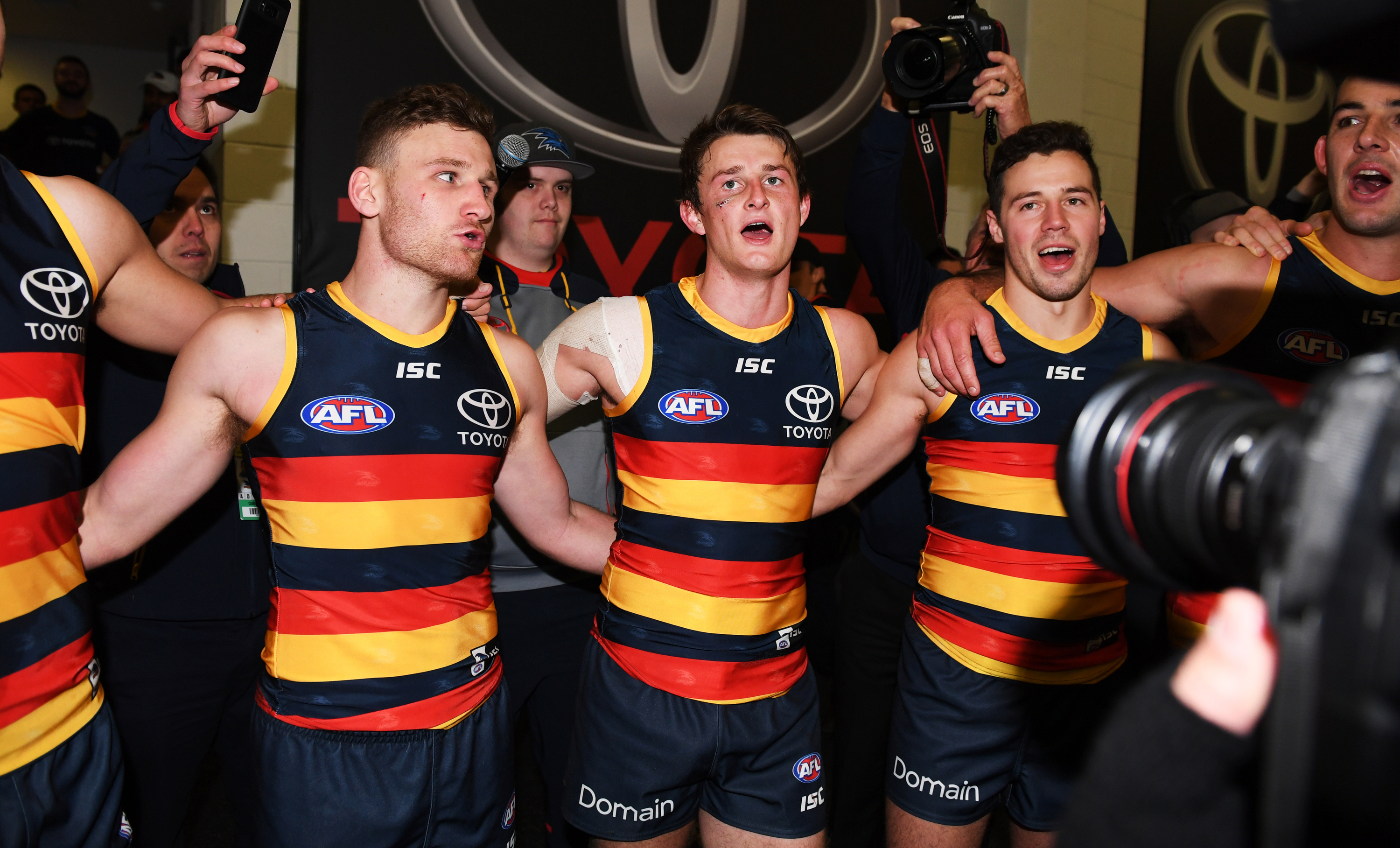 Like much of Australia, I watched England win through to the World Cup semi-finals on the weekend, my ears ringing to the strains of ‘Football’s Coming Home’, the refrain we tend to hear every four years before Football inevitably decides that it’s actually not coming home after all.

Since about 2006 or so, the song always speaks to me in its world-weary, pathetic and cynical sense of vain hope, when it tells of “all those ‘oh, so nears’ wearing you down through the years” and laments the ’30 years of hurt’ (it’s now 52, but who’s counting?)

Of course, the World Cup is only played every four years, so that’s really only about 13 years of hurt in AFL years, which I’m assuming are like ‘dog years’ to humans?

When I first heard that song back in the ‘90s, 30 years seemed like a long time to endure a sporting drought.

But these days it’s a milestone I can see looming with eerie certainty.

And like Broudie, Baddiel and Skinner, it won’t stop me dreaming either.

Apart from this year, at least.

That dream, surely now, is over.

Going into this past round, the equation appeared to be that Adelaide could only afford to lose two of its remaining eight games to make the finals.

So losing the first of those eight is not an ideal start.

If you were to throw the eight fixtures at me randomly and ask me to pick the two we’re most likely to lose, Richmond at the MCG would be right at the top of my list.

This week against the Cats; the Demons and North at home; even Brisbane away on recent form could spell the end of our season.

But realistically, the only two to come in which the Crows will start as genuine underdogs will be GWS away… and, of course, Port. Bloody Port.

So while we’ve already used one of our few lifelines, where there’s life there’s hope.

Hope for what, though, remains unclear.

Scraping into the eight at the death may be a fillip after the season’s fall, but we all know it will come to nothing without the relative armchair ride of the old home final/double chance nexus.

But, for now, hope lingers.

It may not be enough to save the year, but it’s enough to keep my weeks ahead occupied with the various permutations of an unlikely finals-bound flurry.

Which, on reflection, is far a more worthwhile pastime than writing the Great Australian Novel anyway.