So, it’s been a great week to be an Adelaide Crows supporter.

I mean, sure, it hasn’t all been beer and skittles (well, more beer but fewer skittles, perhaps).

It would, for instance, be handy if, say, Rory Sloane was available to play at some point. Ideally while he still lives in Adelaide.

And also if Tom Lynch and Rory Laird hadn’t joined the injury queue at an inopportune time.

And if reading the weekly injury update didn’t prompt a reaction something like this:

Indeed, so all-pervasive is our injury curse that it’s even following our former players around the country, striking down the likes of lil’ Charlie Cameron and poor old Jake ‘The Snake’ Lever like some deranged AFL-based Final Destination remake.

But still, it’s a great week. A week for celebration. 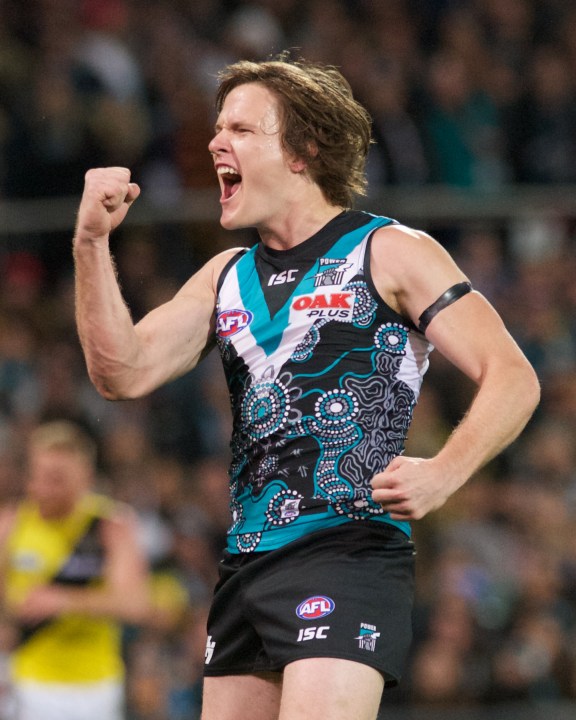 No, not this kind of celebration. Photo: Michael Errey / InDaily

I mean, sure, there’s that burgeoning injury list, and the fact most of our remaining players have taken up the club’s 2018 “Mindfulness Over Matter” mantra with gusto, and the fact Sloane has still not re-signed (nor Lynch, come to that) and, on the strength of the team’s current standing, would be hard convinced that they’d be wise to do so.

And there’s also the fact we’ve just lost three on the trot for the first time since early 2014, which was four years and as many coaches ago, and that the Adelaide Football Club’s ‘September 2017 to June 2018’ history could be succinctly summarised thus:

Do I remember the last three-game losing streak uncannily vividly? Why, yes – yes, I do. Largely because these Fumbleland missives started (in an oddly concise and gif-free manner) smack bang in the middle of them – after a particularly galling Showdown loss provided an appropriately underwhelming start to our tenure at Adelaide Oval.

This, then, is officially the longest losing streak in Fumbles’ lifetime.

And I fear it ain’t over yet. Perhaps not by a long shot.

After all, if we can’t beat the banged-up Giants at home after their own month-long losing streak, and lowly Freo without their two most important players – who’d give us a sniff against the Hawks at the ‘G, and then West Coast, Richmond and the Cats thereafter?

But none of that really matters.

All is right with the world.

Because (drum roll please) this week… we bought a baseball team!

So it matters not a jot that we lost the plot against Freo.

Who gives Blighty’s proverbial rat’s tossbag that we’re actually closer on the ladder to the Western Bulldogs or (gulp!) Gold Coast Suns than we are to the teams in the top four?

Because while we may be no closer to that elusive flag than we’ve been at any point in the past 20 years, we now have an exponentially higher chance of coming up trumps in the Oceanic Pro eSports League or the Australian Baseball League.

So, who needs football?

Maybe it’s some bizarre corporate-scale form of retail therapy. I get that – sometimes when I’m in a bad mood I tend to splash out on a sneaky impulse purchase (of beer, generally). So it’s only logical the Crows opted to dispel the annoyance of coughing up a final quarter lead against the Giants last week by buying themselves a team from a completely different sport.

I guess that means to make up for this week’s trauma they’ll have to buy a minor utility of some sort. SA Water or the Motor Vehicle Registry might be for sale if they ask Rob Lucas nicely enough, and there’s always SA Power Networks (proud sponsors of the Adelaide Bite™!) although that might require some fundamental rebranding given the Company Formerly Known As ETSA’s latter-day name has a none-too-subtle ‘Port Adelaidey’ vibe about it.

In fact, if we continue on our current win-loss trajectory the Crows could end up owning everything in South Australia that isn’t nailed down.

Which, if I’m honest, still wouldn’t make me feel remotely better about not having won a flag for the past two decades.

Crows chairman Rob Chapman was naturally asked how buying the Bite™ would affect the club’s football operations, to which he replied: “It will have no impact, zero impact, on football and their resources and the time spent making sure they do what they are here to do.”

Splendid. No impact. None. Zero. Which begs the next question: what’s the friggin’ point of it then?

I mean, if buying up random niche sporting franchises will somehow bolster the club’s revenue in a way that will help it win an AFL premiership, then hoo-sodding-ray – I’m all for it. Fill your damn boots.

But, to be perfectly frank, Crows: the next time you come out with an exciting new announcement, less hype about your expanding portfolio of boutique investments, and more letting me know where and when to attend our Grand Final victory parade, please. Cheers.

At least, though, the Adelaide Bite™ purchase provides an obvious cross-promotional slogan that handily namechecks our newest impulse buy while neatly summing up our collective thoughts about our 2018 campaign in general:

You might be getting the idea by now that my knowledge of (and interest in) baseball extends about as far as the Simpsons episode where Monty Burns coaches the Springfield Nuclear Power Plant softball team.

And, to be honest, I can imagine Don Pyke giving his injury-hit Pykelets a very Burnsian rev-up against the Docker-Juniors on Sunday afternoon: “All right, you ragtag bunch of misfits! You hate me, and I hate you even more. But without my beloved injured stars, you’re all I’ve got… so I want you to remember some inspiring words that someone else might have told you over the course of your lives, and go out there and win!”

I also note that Myles Poholke appears to be getting into the Springfield spirit, sporting the ‘Don Mattingly’ hairdo after the coach evidently demanded he ‘trim those sideburns’ for the last time. 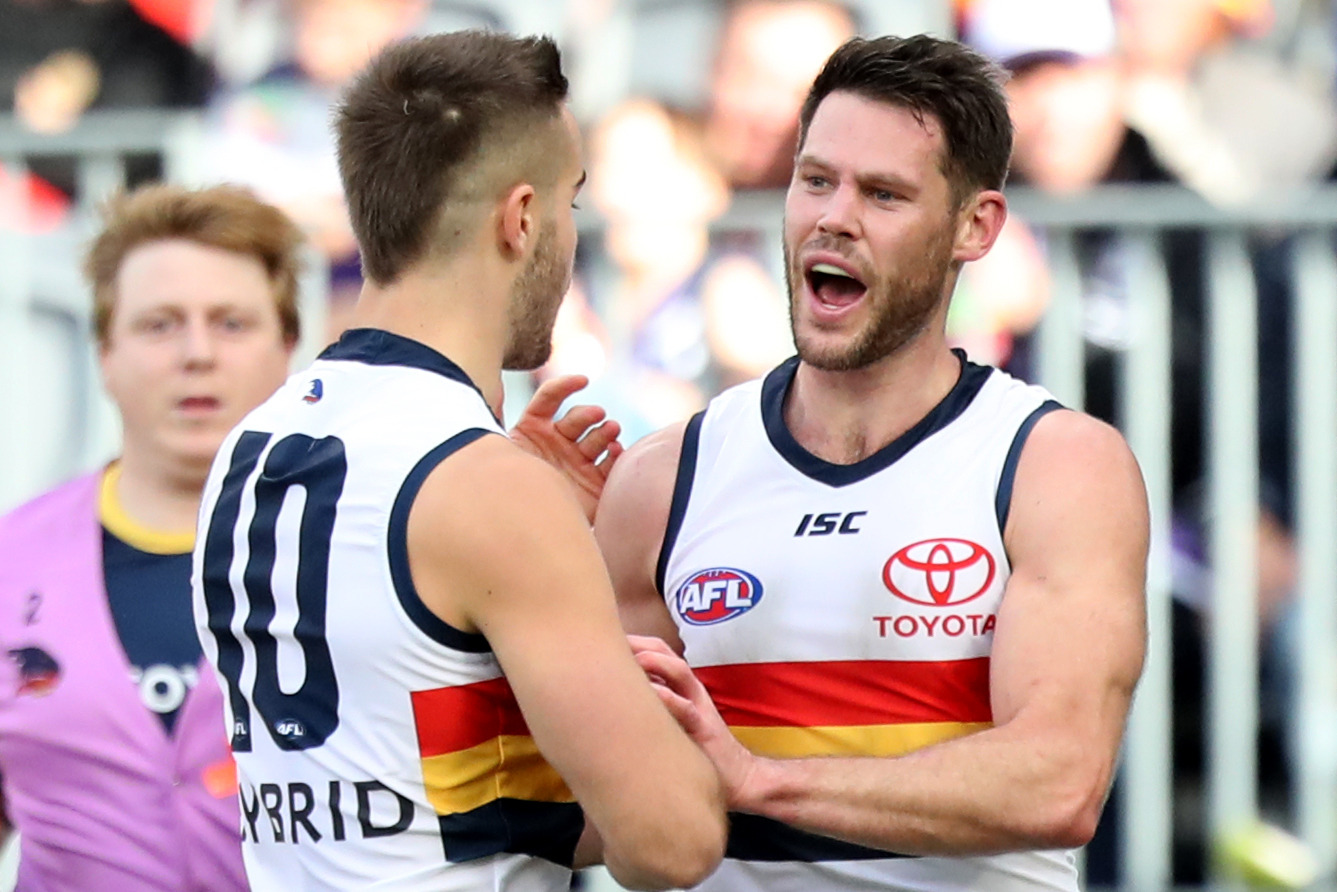 “Poholke, for the last time – get rid of those sideburns!” Photo: Richard Wainwright / AAP

While on the subject, it’s obviously counter-intuitive here at Fumbleland to throw a positive into the mix, but the Mattingly-matted Poholke looked pretty solid in that last quarter, I thought, while Doedee’s run-down tackle of the goal-bound Walters was the highlight of the week (apart from buying the Adelaide Bite™, obviously).

Which only emphasises how befuddling our entire losing spree really is.

Indeed, it seems predicated less on our own woefulness than our uncanny knack of allowing successive opponents to play well above their recent level. We appear, quite literally, to play lower-rung teams into form, and higher-rung teams into yet better form.

For the second week running, Eddie Betts has been our best forward, without being anywhere near as good as he could be – or has been. 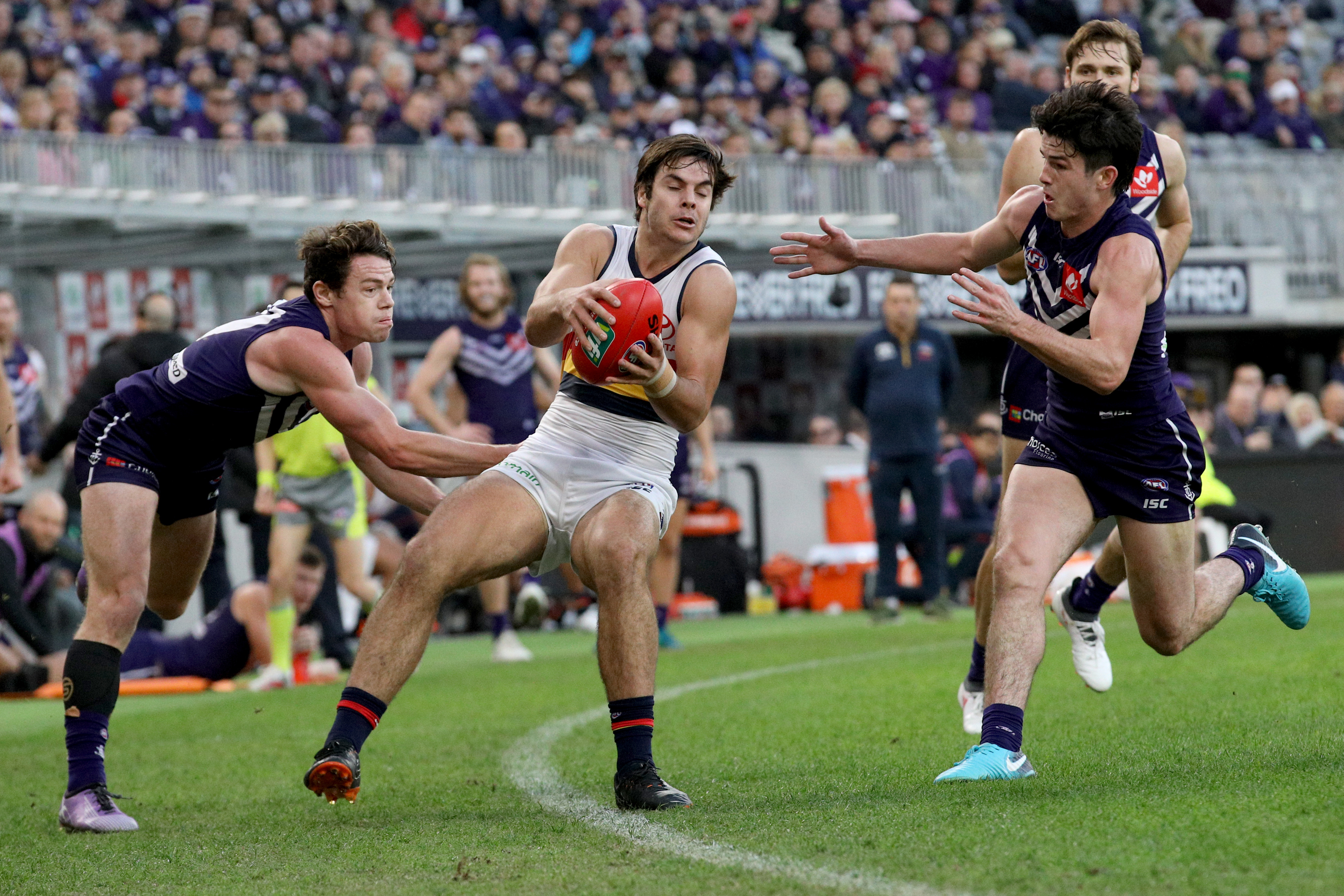 If we were to write an epitaph for the Crows’ 2018 season (and it’s probably not too early to consider it) it could well be the same one Spike Milligan famously had inscribed on his tombstone: ‘I told you I was ill.’

Far from being the triumphant return we’ve spent his ‘mini-pre-season’ anticipating, it was instead his poorest outing of the year.

Maybe it was the harried Crows’ way of telling everyone: ‘See, we told you he wasn’t ready!’ 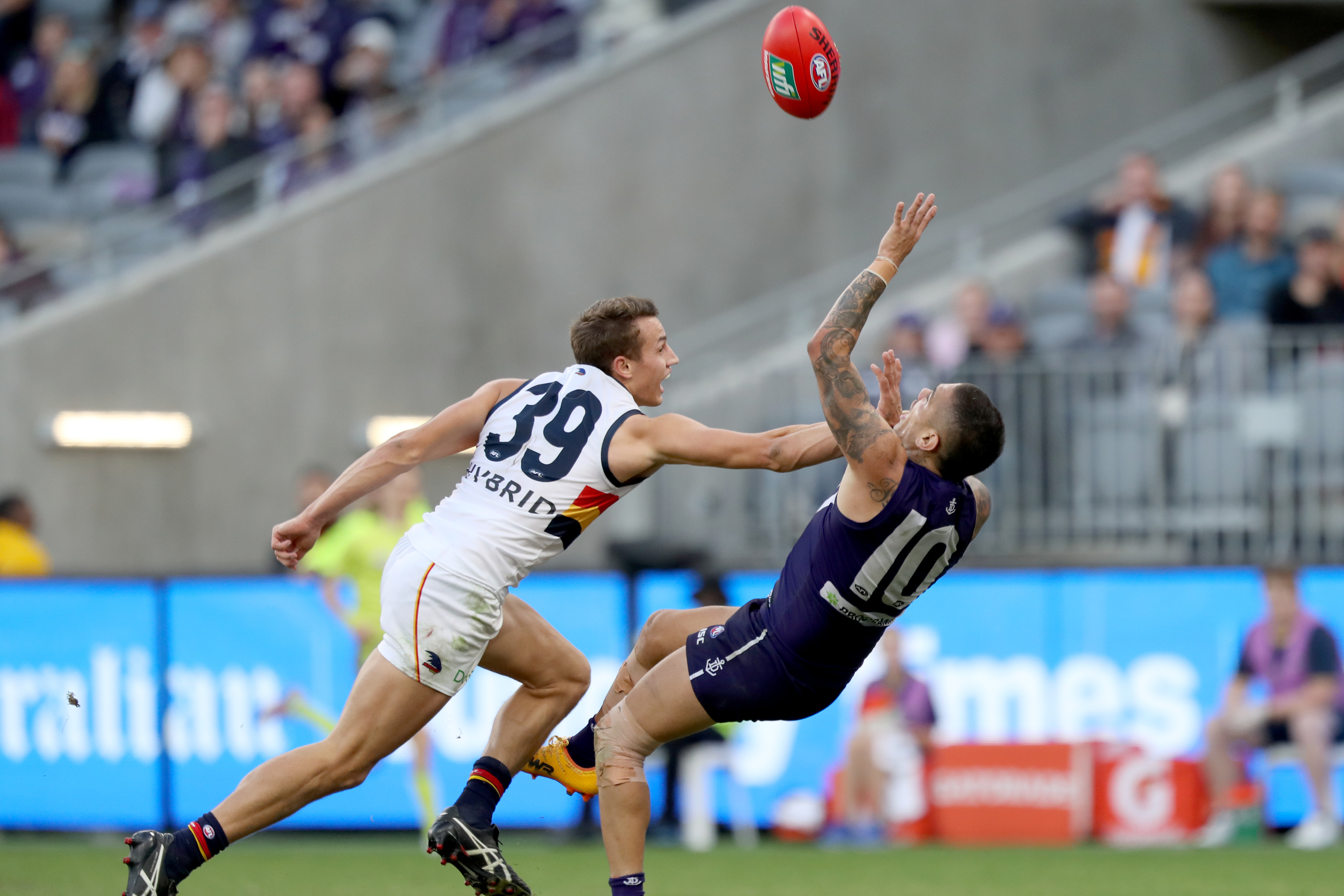 All of which might still be emotionally manageable were it not for the fact that Port Adelaide – despite also being distinctly average – are odds on to propel themselves into the upper echelons of the ladder on the back of an interim draw so soft you could use it as a duvet.

Though to be fair, Port managed to outlast the reigning premier on Friday night, albeit off the back of just one decent quarter – a trick we tried to replicate on Sunday against the Dockers, but with far less success. 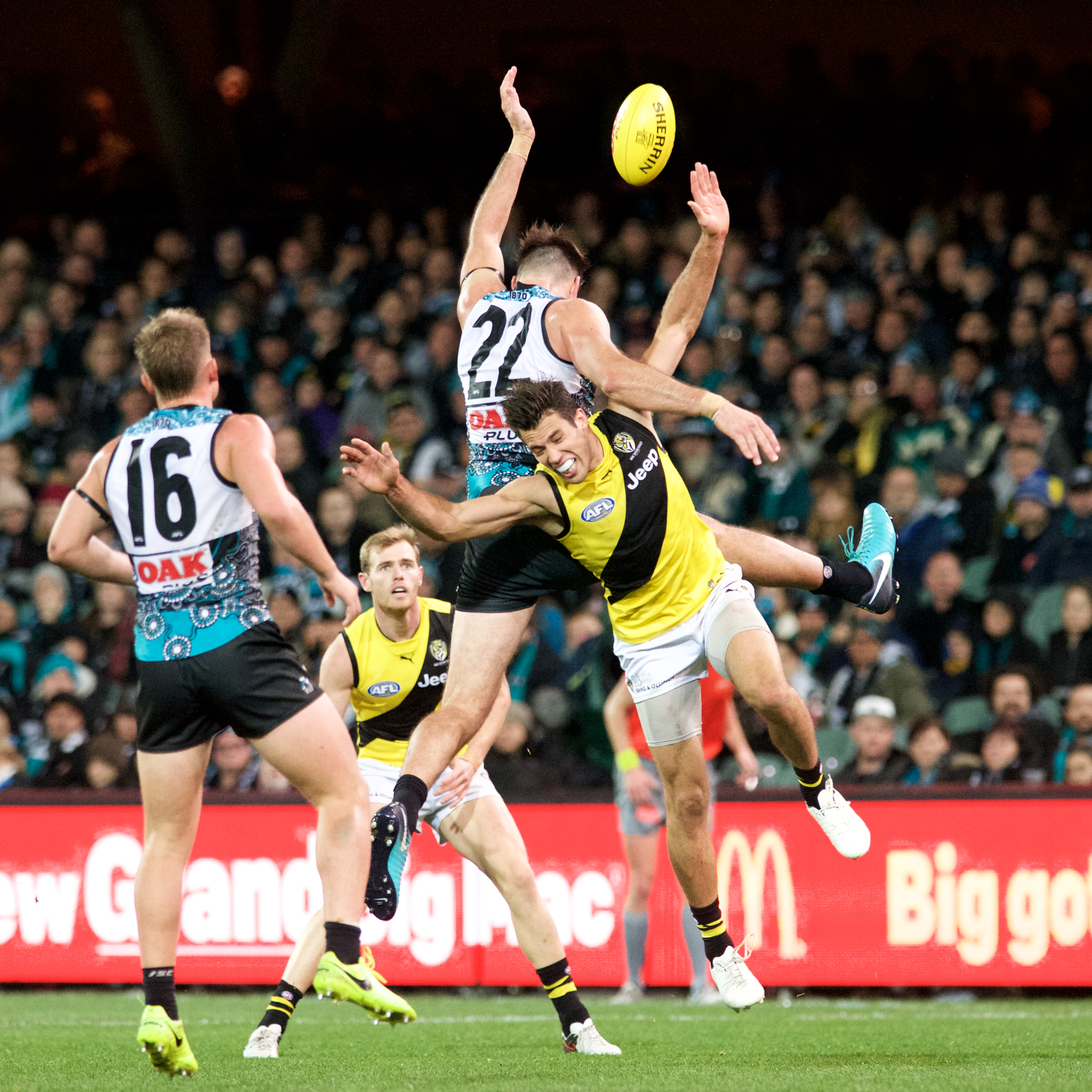 The 18 AFL coaches at the Freeze MND ice bath weren’t the only ones preparing to take a dive this round. Photo: Michael Errey / InDaily

One could point out, of course, that the Tigers were missing their best player – although that would invite the obvious retort that so too were Freo and yet they still managed to account for the reigning non-premier (i.e. us).

It’s hard to get excited about Port Adelaide playing Richmond these days: it’s kinda like Donald Trump’s meeting with Kim Jong-Un – you don’t like anyone involved but you still have a vested interest in the outcome and hope it ends up delivering something helpful. 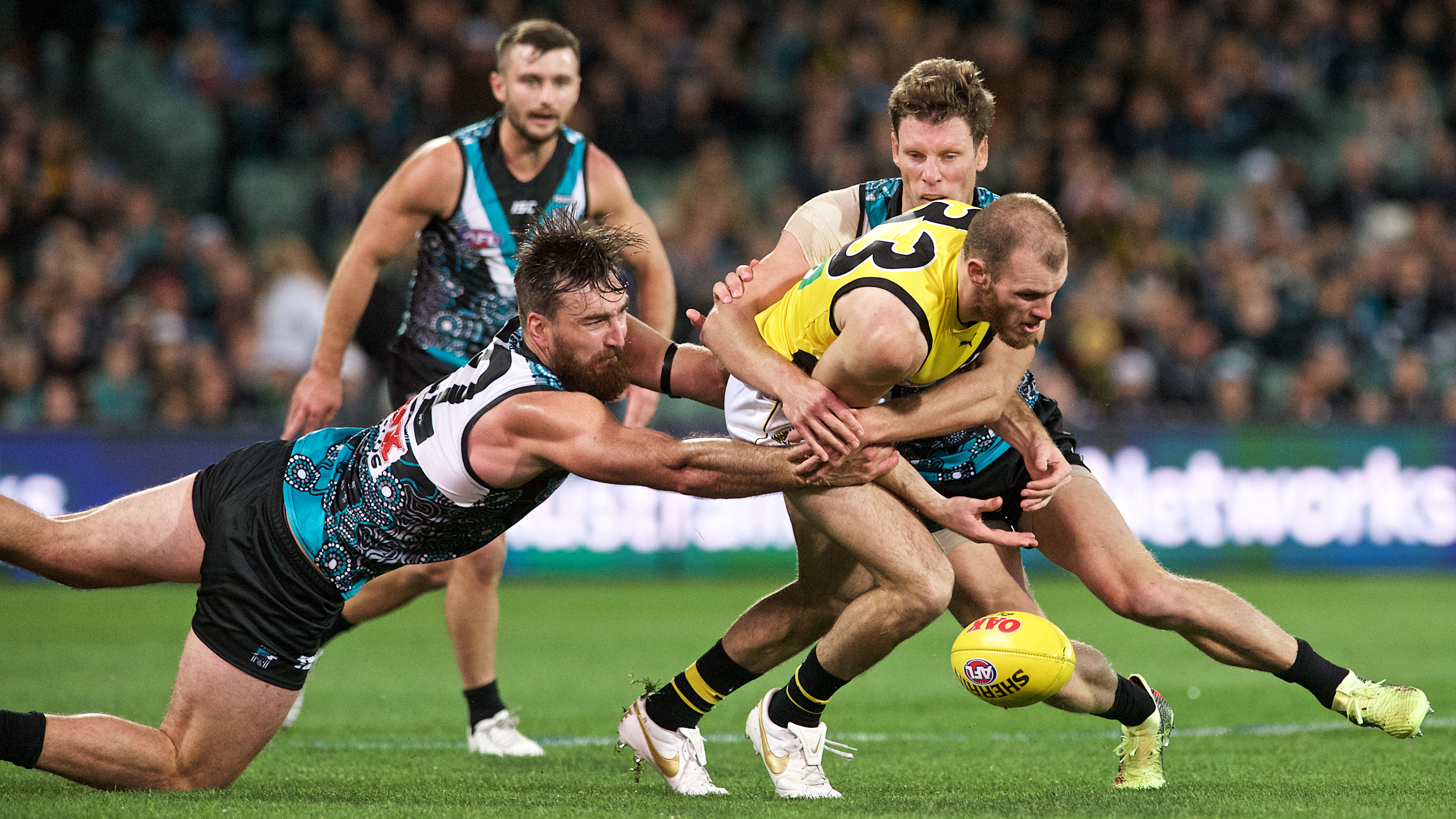 Which, on the whole, it didn’t: Port’s victory and marshmallow-soft draw ahead suggest they’ll now be impossible to dislodge from the final eight. And while the fact the Tigers briefly looked like being dislodged from the top two was some consolation, they remained safely ensconced there by the end of the round, courtesy of a Melbourne capitulation that wasn’t anywhere near as much fun as it should have been had Lever still been playing.

Not that we should worry: no doubt the AFL will still find a way to gift the Tigers a home-ground finals run whether they finish in the top two or not. Even Damian Hardwick pointedly noted that he wasn’t bothered about the Tigers’ perfect(ly horrible) record in interstate games this season – probably because he’s looked at the fixture and realised how few of them they have to play.

Not that we can really complain about our relative lack of games on our home deck when we’ve lost three of them this season already.

To be honest, heading in to Friday night I wasn’t even 100 per cent sure who I was supposed to be barracking for (or against, to be more precise), so you can probably trace the start of the Tigers’ second-quarter collapse back to the moment I decided I was going for them. 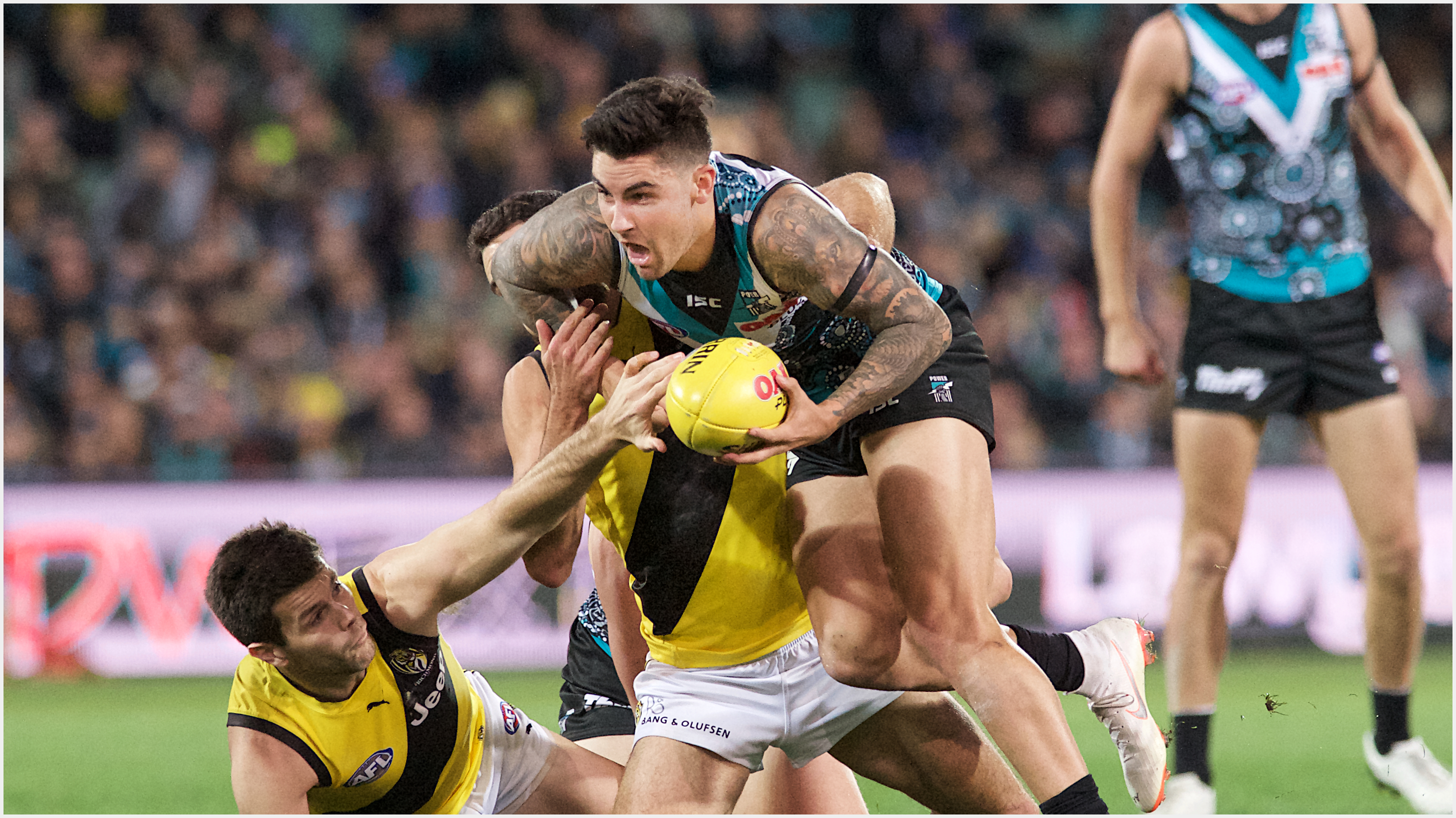 Chad Wingard was back in good touch against the Tigers. Photo: Michael Errey / InDaily

Because, rather than wishing revenge on Richmond, we should probably be using them as a symbol of optimism – hanging onto the forlorn hope that this fast-vanishing season is our equivalent of their 2016 pre-premiership train-wreck, or the Cats’ underwhelming 2006 prelude to their history-making era.

Of course, it’s also possible that we’re just a fairly average side that played above itself for a season or two, and failed to make the best of it. As we are wont to do.

It now appears the best – the absolute, utter, stultifying best – for which we can vainly hope this season is one of the following three scenarios, which I’ll count down in reverse order of preference:

3) That we bomb out completely and at the very least pick up an Izak Rankine or somesuch at the draft, while the Power sweep all before them en route to a Grand Final berth, at which they get smashed by a margin exceeding 48 points.

2) That we bomb out completely and at the very least pick up an Izak Rankine or somesuch at the draft, while the Power sweep all before them en route to a Grand Final berth, at which they get smashed by a margin exceeding 119 points.

Or… 1) That we rally considerably and somehow scrape into the eight, and end up playing off against the higher-ranked Power in the first week, effectively ruining their hard-won home-ground advantage before once again ending their season with the last kick of an elimination final, before riding our luck for as long as it holds thereafter…

Which, on the strength of the year to date, wouldn’t be long.

Touch Of The Fumbles has now given up trying to predict when and whether its mid-season bye will kick in.