Yes, I’m aware that last week I said we were closing the doors here at Fumbleland for a few rounds, but so bad was Adelaide’s homeground capitulation that I was forced to postpone my midseason bye for another week in order to pick up the emotional wreckage. Yet again.

The old Biblical book of Ecclesiastes told of the ephemeral passing of seasons – their inevitable, inexorable passage, and the futility and meaninglessness of man’s actions therein. It was apparently written by Solomon in his dotage, in a manner that makes me suspect Solomon would have been a Crows supporter if he’d been that way disposed.

The oft-quoted bit that The Byrds used in ‘To Everything There Is A Season’ talks of ‘a time to break down, and a time to build up’.

Thus far in 2018, we’ve got the first bit down pat – we just haven’t got round to the second bit yet.

It was all shaping up so nicely too. Port obligingly served up their now-traditional post-Shanghai single-figure loss, going down to the Hawks in Tassie by three points after losing the corresponding fixture against the Cats last year by two, and I was happily making wine from their supporters’ tears (metaphorically speaking, of course) about the fact they had failed to crack the eight at the halfway mark of the season.

We rounded out the weekend with our Giant own-goal and handed eighth spot to Port Adelaide.

Leaving us stranded in the ninth spot traditionally reserved for the most Richmondy team in the competition.

Which, as we’ve already established, is us.

Well, this is awkward, isn’t it? Source: AFL.com.au

(Indeed, it’s one of the great ironies of the AFL these days that the least Richmondy side is, in fact, Richmond.)

Fortunately, we don’t need to watch our entire display of relative ineptitude again, because there was a single moment in the second quarter that summed it all up.

When Eddie took a grab hard up against the boundary in the north-eastern pocket of Adelaide Oval. His pocket. The Eddie Betts pocket.

In any of the past four seasons, he would have gone back – maybe given the crowd behind him a knowing nod, a cheeky glint in his eye – and then curled the ball off his boot to thread an implausible, improbable signature goal.

Yesterday though, he desperately looked around for somewhere to pass the ball off. And then, realising that he had to take the shot, he jogged in for a regulation drop punt that sailed straight off the boot, barely sneaking in for a behind. 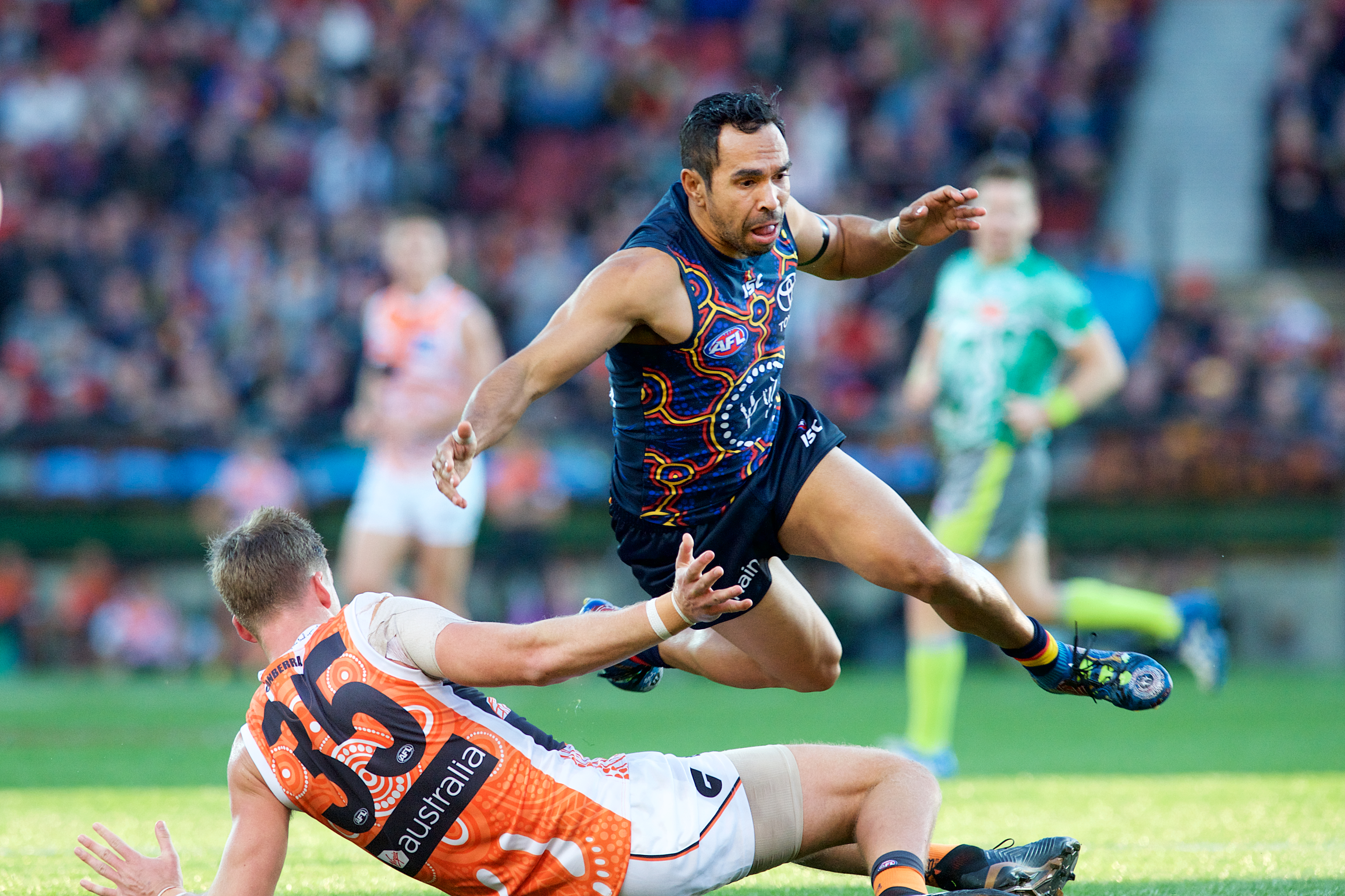 Eddie: flying, but not to the heights he once did. Photo: Michael Errey / InDaily

There are shades of previous campaigns, but there is something sorely lacking. A bit of confidence, a little joie de vivre. And that touch of magic that once seemed to lift us above the sum of our parts.

Don Pyke seemed to concede as much when he admitted in the aftermath that “we are missing a bit of spark”.

Indeed. But our opponent was hardly in ominous touch, having lost their last four and before that beaten only the Lions and drawn with St Kilda, and having never won in SA before.

One of the grumpy old men on AFL360 or On The Couch or somesuch last week declared that GWS midfield gun Dylan Shiel was now a shadow of his former self – which pretty much made it inevitable that he’d play a blinder and duly rip us apart. 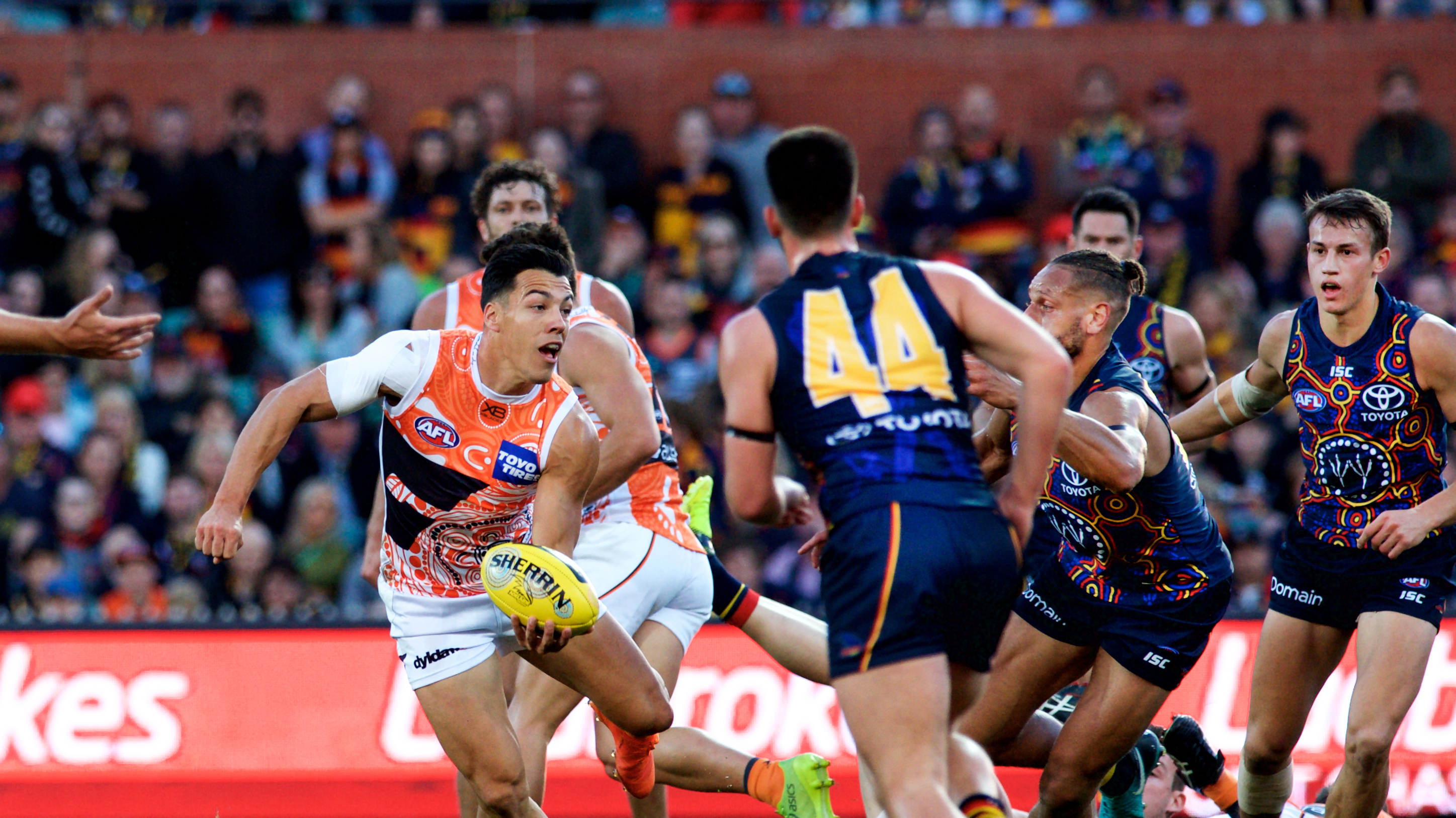 Dylan Shiel, not being a shadow of his former self. Photo: Michael Errey / InDaily

And, sure enough, we happily played the Giants back into form, reigniting their season even as ours sunk further into the mire.

Were we terrible? No. But we were ordinary. Where there was endeavour, there was no finesse, in a match both tight and tough but blighted (on our side) by befuddling decisions at crucial moments. 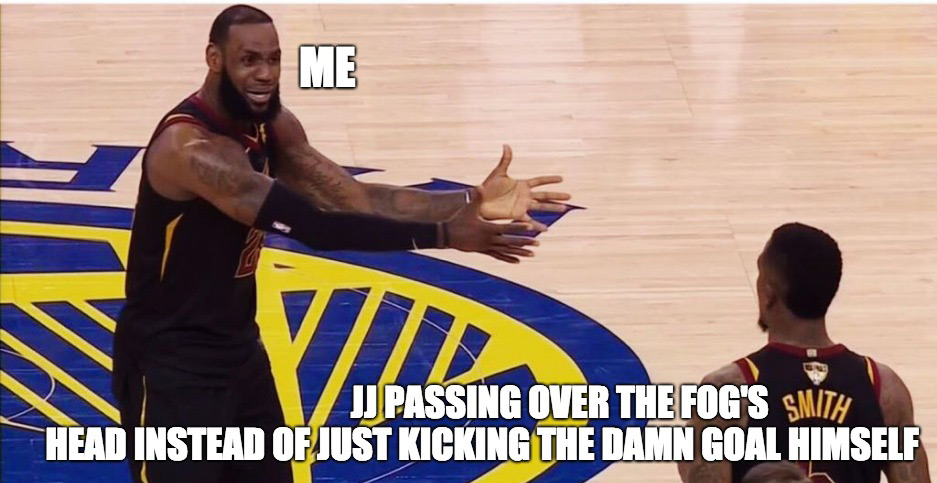 Suffice to say that if your last name starts with a ‘J’ you probably struggled yesterday but, Seedsman aside, there is not a single player of whom we could say that they are playing better this season than last. 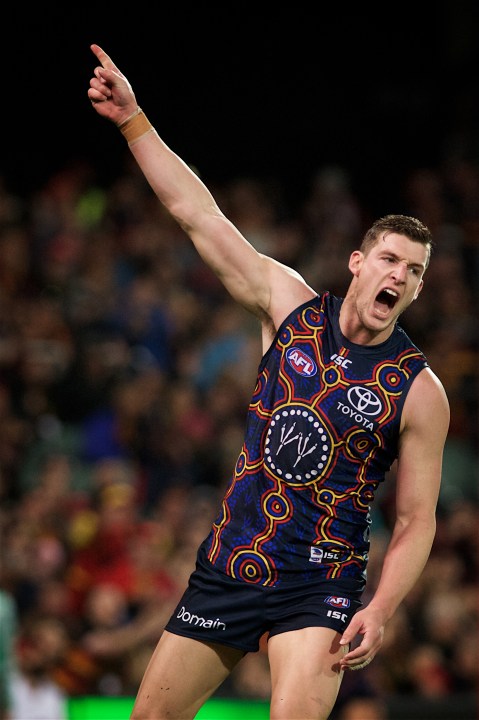 Josh counting the number of goals he’s kicked on his fingers, a la Ken Hinkley after the Showdown. Photo: Michael Errey / InDaily

We do have The Fog, of course, with even the weather in Adelaide today apparently keen to pay homage to our emerging new Number 32.

Young Darcy’s contract extension news on Saturday was a small glint of sunshine through the gloom of a club whose retention record does tend to feel more ‘Max Gawn’ than ‘Dan McStay’.

But it was tempered pretty substantially by the fact the email announcing the news arrived in my inbox on Saturday at the exact same time as the one begrudgingly confirming Brad Crouch’s looming groin surgery, effectively mothballing his season.

Which is kinda the PR equivalent of saying: “So – we’ve got some good news, and some bad news…”

And while the good news was indeed good, it was hardly unexpected, while the bad news was not merely bad, but also terrible, horrible, no good and very bad indeed. 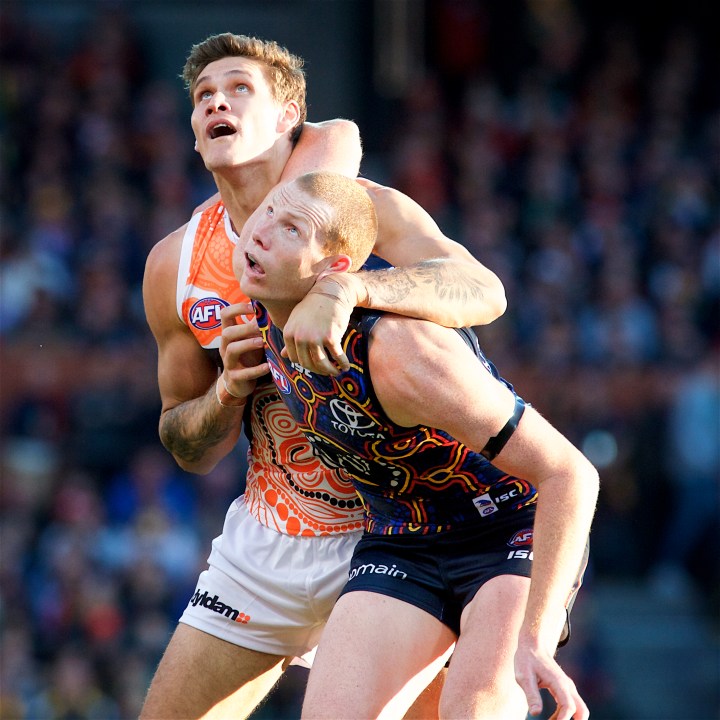 The idea of getting Bryce Gibbs was that he’d be the midfield icing, not the whole damn cake. And now with Tom Lynch joining the burgeoning queue for the Crows medical room, 2018 is now shaping up to be what the Romans would have called an annus horribilis.

Indeed, the past 20 years have all been pretty much anni horribiles.

There was a moment there, when Jeremy Cameron kicked his third late in the last quarter, that long-suffering Crows supporters collectively shared that hideous realisation that creeps up on us at some point each season.

It’s that moment when you realise that not merely this game, but likely this year, is now beyond us. (NB: My editor is quite certain that I’ve used this line before; I suggested I’ve probably used it at least four times over the past five years.)

And no, I’m not saying we should throw in the towel, or that finals are now out of reach, or that we can’t win more than we lose from here on in.

But the truth is, we’re not a side that can snare a flag from outside the top four – or more probably even the top two.

The Bulldogs managed it in 2016, in part, because they are a Victorian side, and thus two of their nominally ‘away’ games (including the Grand Final) were still at least played in their home state, if not their home ground. 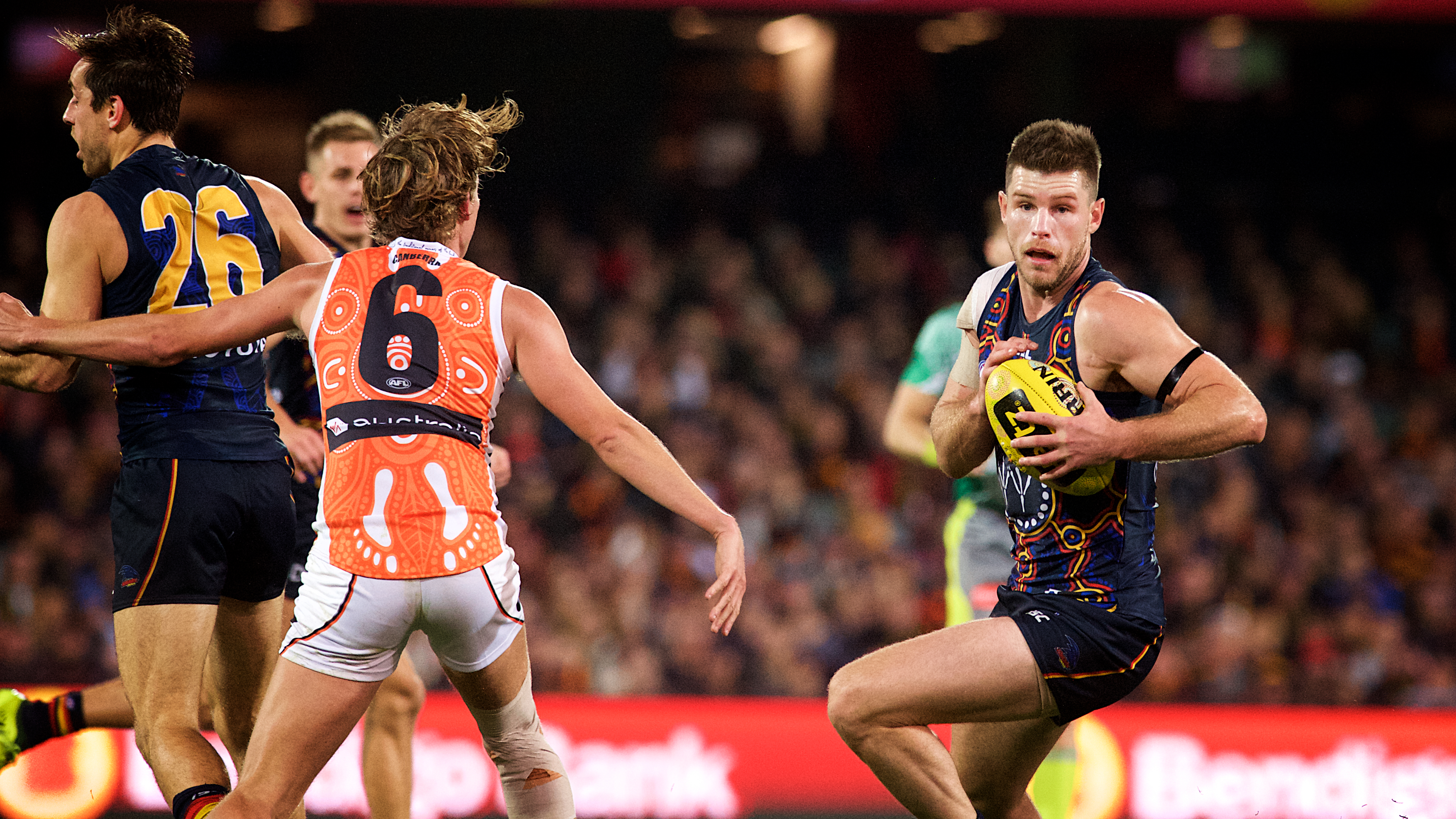 Gibbs: the ‘Bryce-ing’ on the cake? Photo: Michael Errey / InDaily

But if even one final on the road last year was a stretch, the prospect of winning three or four appears an impossibility.

And on current form, it’s a moot point in any case.

For there is something of the naked Emporer about the Crows at the moment: a team widely considered a top four lock, with a multitude of excuses to explain away the fact that they’re not actually in the top four, or even now anywhere thereabouts.

But after successive poor weeks, it’s time to contemplate the wretched prospect that (whisper it) we’re actually just not that good.

We are a team now sitting in the middle rungs of the AFL ladder that yesterday played every bit like a middlebrow team. 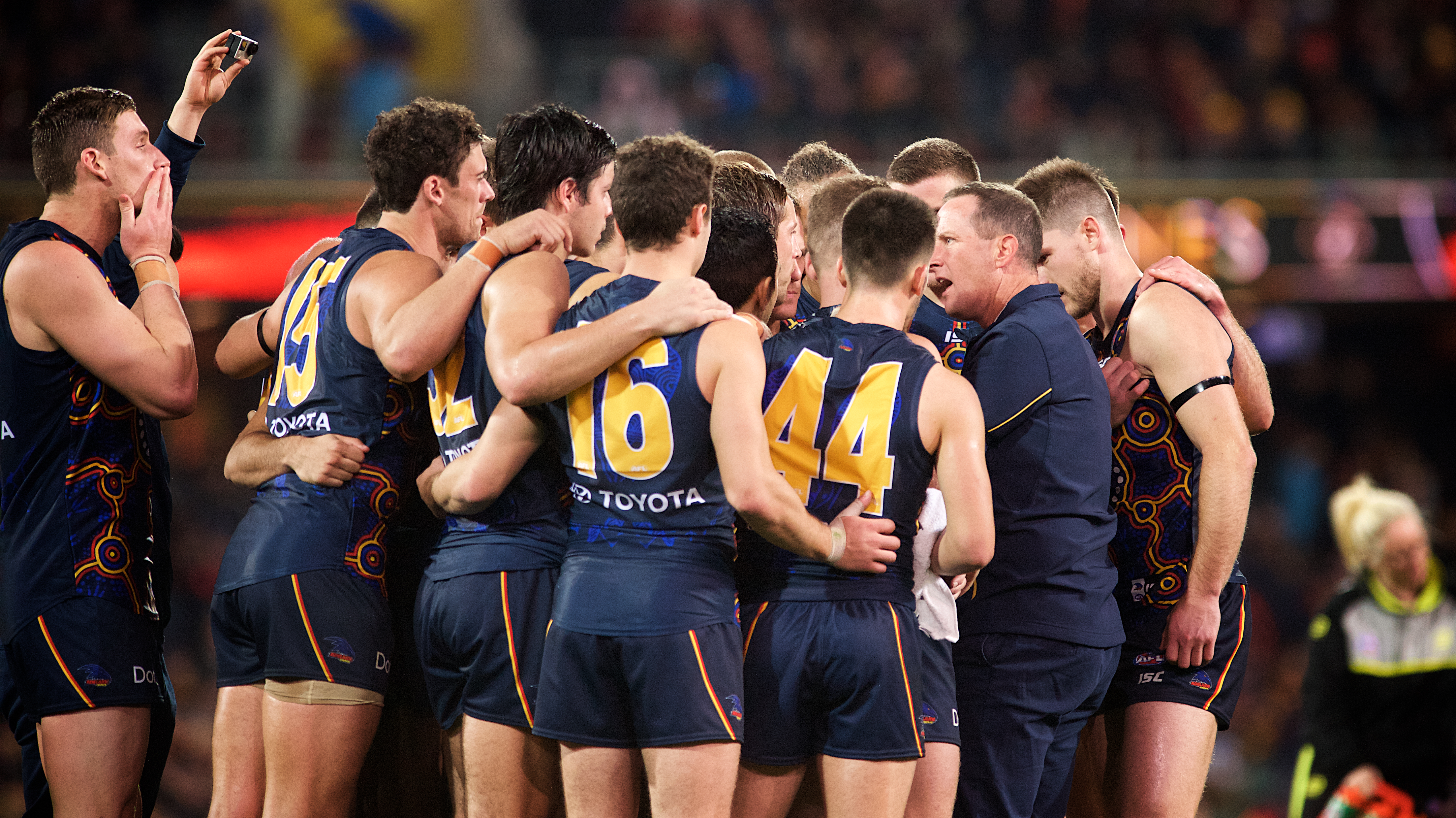 The Don contemplates some next-level glaring as JJ appears to have a Moment of Clarity. Photo: Michael Errey / InDaily

There was an ominous portent on the Giants’ banner yesterday as the players took the field. ‘Wise men say, good things take time,’ it read.

Not that the Giants would know; they’ve only been in the competition for about five minutes (or seven seasons, to be precise).

If you want a real lesson in the persistence of time, you need to follow a team like Adelaide. A team that, at some point every year, makes me think of that scene at the end of Cape Fear, with a demented Robert de Niro bellowing about how “Now you will learn about loss! Loss of humanity!”

It’s a lesson we’ve learned only too well.

It’s now 20 goddamn years since we last won a flag, and after forfeiting our chance last year, we now feel as far away from another chance as ever we have since ’98.

So well may we say ‘These things take time’, but after yesterday, ’tis perhaps appropriate to quote The Smiths’ song of the same name – “you know where you’re going, and you know where you belong… and I know that I’m the most inept that ever stepped.”

Though maybe the more apt and futile lament of the Crows supporter is to be found in another song on the same album: ‘Please, please, please, let me get what I want this time…’

Sure, it wouldn’t be the first time. But Lord knows, it’s been a while.

Touch Of The Fumbles will now recommence its bye-round break. Probably.