But to be honest, I’m not really that annoyed about what went down up north yesterday (ie, us). Bad days happen and we’ve had one coming for a while now, what with this injury crisis that isn’t really happening.

The ‘Non-Crisis’ deepened even before the ball was bounced, with Paul Seedsman’s season going from breakout to breakdown. Fortunately, youngster Myles Poholke was on hand to step into the breach, though apparently no-one thought to let him know he was playing, given he was without a stat to his name by the first break.

But, still – I’m not annoyed about it. 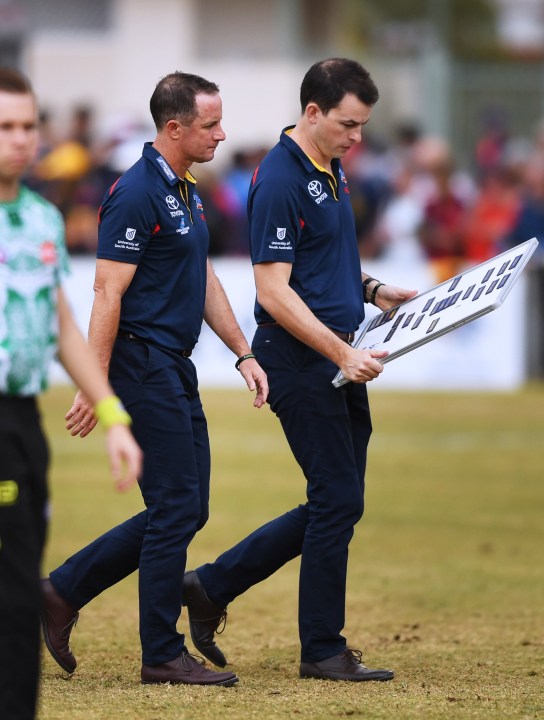 Sure, it’s an unusual and disheartening experience to sit down to watch your team play for three hours, and to know within the opening minutes that they’re not going to win. Frankly, I don’t know how Carlton supporters do it every week.

This was one of those games where you really need some kind of ‘edited lowlights’ function – something like the narrative technique Paul Thomas Anderson used in Boogie Nights, whereby after the first couple of Melbourne goals the broadcaster can just insert the following title card, over black: 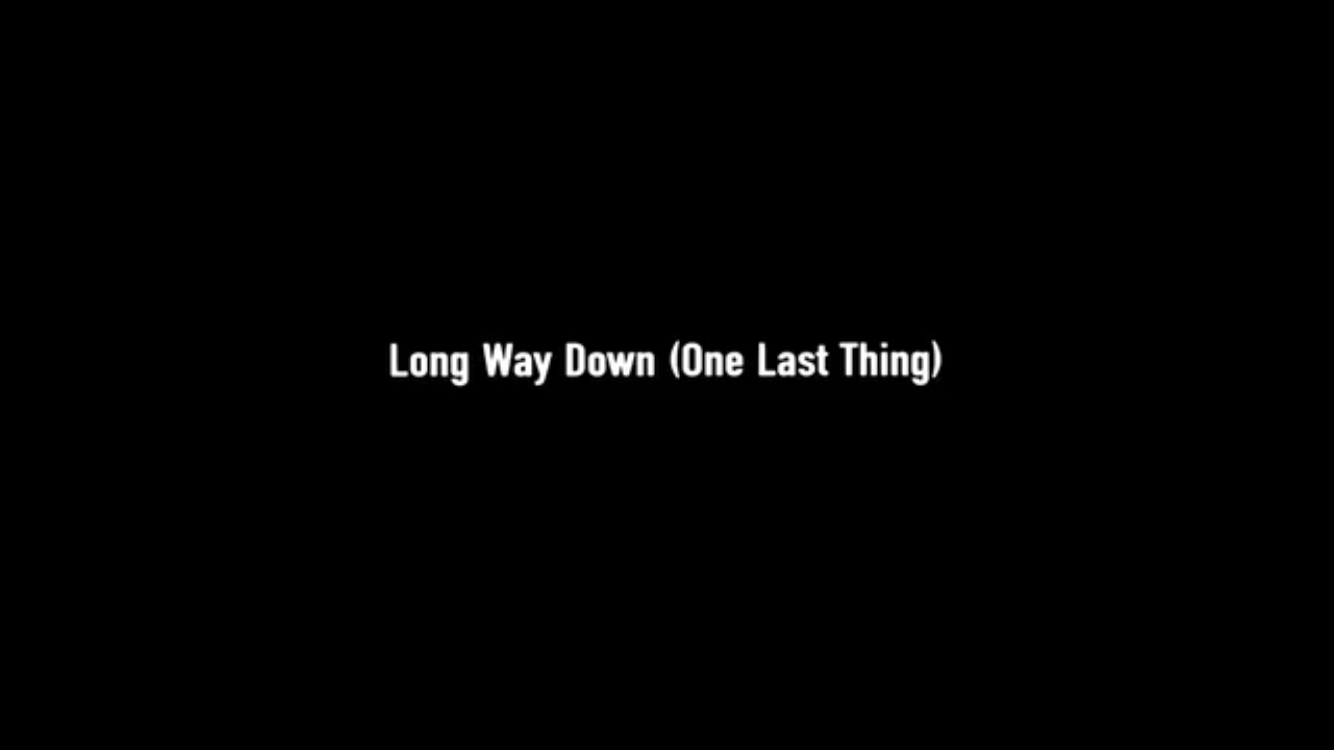 And then cut directly to this: 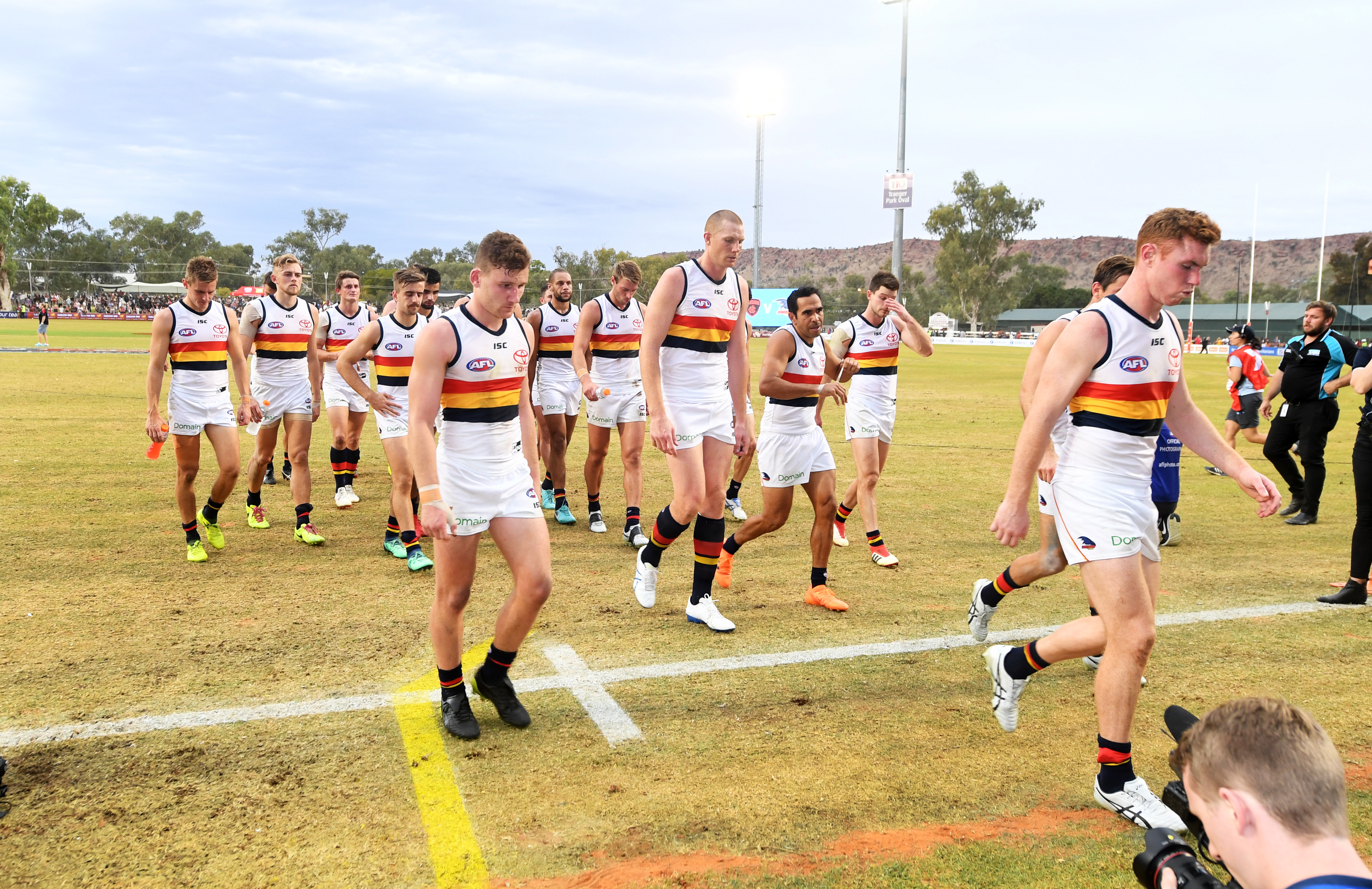 Think of all the annoyance this would save.

Not that I’m annoyed.

It’s not annoying in the slightest that we utterly squandered an away game at a neutral venue. Though it was appropriate that it took place in the Northern Territory, as our comical attempt to kill our own season should surely qualify us for the Darwin Awards. 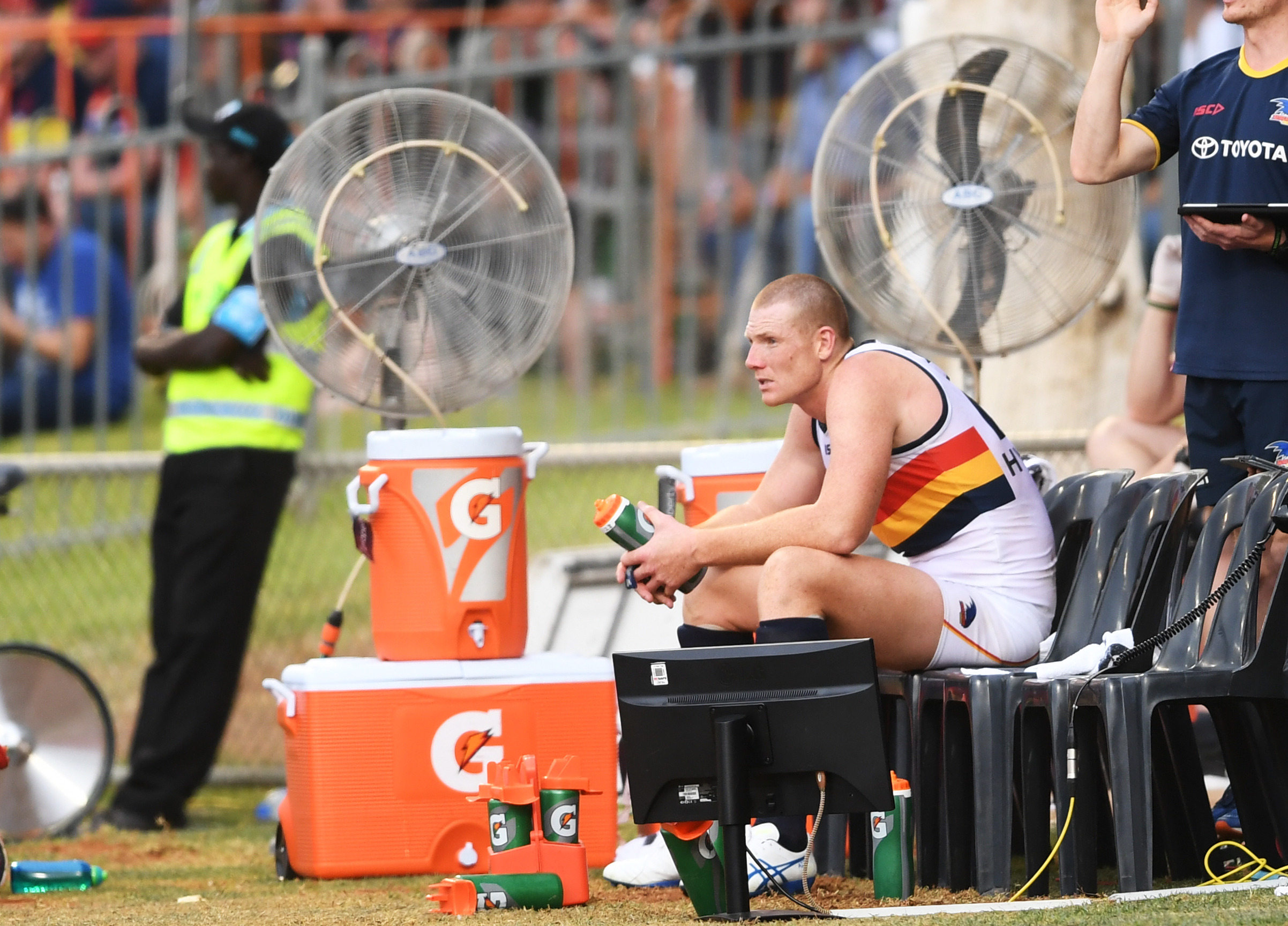 The great thing about playing in the Northern Territory is that it gives players a chance to get close to the fans. Photo: Mark Brake / AAP

Although it was actually in Alice Springs’ Traeger Park, which will henceforth be known as ‘The Snake Pit’.

Reptiles are generally pretty comfortable in the Top End (of Australia) so it was little surprise that Jake ‘The Snake’ Lever had a good day.

Although I thought our much-mooted strategy for getting inside his head was fairly ingenious: to play so consistently poorly that he felt genuine pity for us and had a corresponding pang of guilt that he’d left us in such a shoddy state.

Tex Walker reportedly lamented after ‘Leaver’ lived up to his name that the young defender was “choosing money over success’’. Maybe that was a typo in the transcript? Surely he actually said he was choosing money and success?

Because, while I don’t like the bloke, it seems the option he went for (more pay, prospective premiership) was objectively more appealing than the alternative we offered (less pay, playing for annoying team). Although it’s probably fair to point out that Melbourne has been an Annoying Team for far longer than we have, and no reasonable person could really begrudge them their current form. Of course, I’ve never claimed to be a reasonable person.

AdelaideNow ran a poll during the week, asking readers which out of a) Lever, b) Dangerfield, c) Cameron, d) Tippett, e) Gunston, f) Davis or g) Bock they were unable to forgive. I couldn’t take part because, bizarrely, there was no option h) All Of The Above.

Because, let’s be clear here. 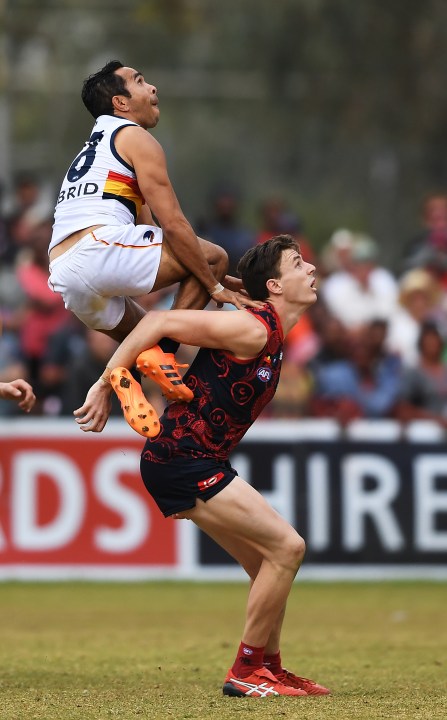 As Jim Morrison once said, ‘Ride the Snake…’ (Unfortunately, this moment is not particularly representative of the overall match.) Photo: Mark Brake / AAP

Players who leave their teams for whatever reason to go and play for an opponent should rightly be held beneath contempt for all eternity.

But besides those guys (oh, and also Kyle Cheney and Curtly Hampton) there really is no excuse for players leaving the club that drafted them to play elsewhere.

Especially not when it happens to the same club every single year.

My son got his AusKick pack in the mail last week, which included a deck of Footy Cards. I went through it with him, dutifully explaining who all the players were and for which team they played and, where relevant, pointing out the ones that used to play for us.

At length, he asked the obvious question: “Why do so many players leave the Adelaide Crows?” 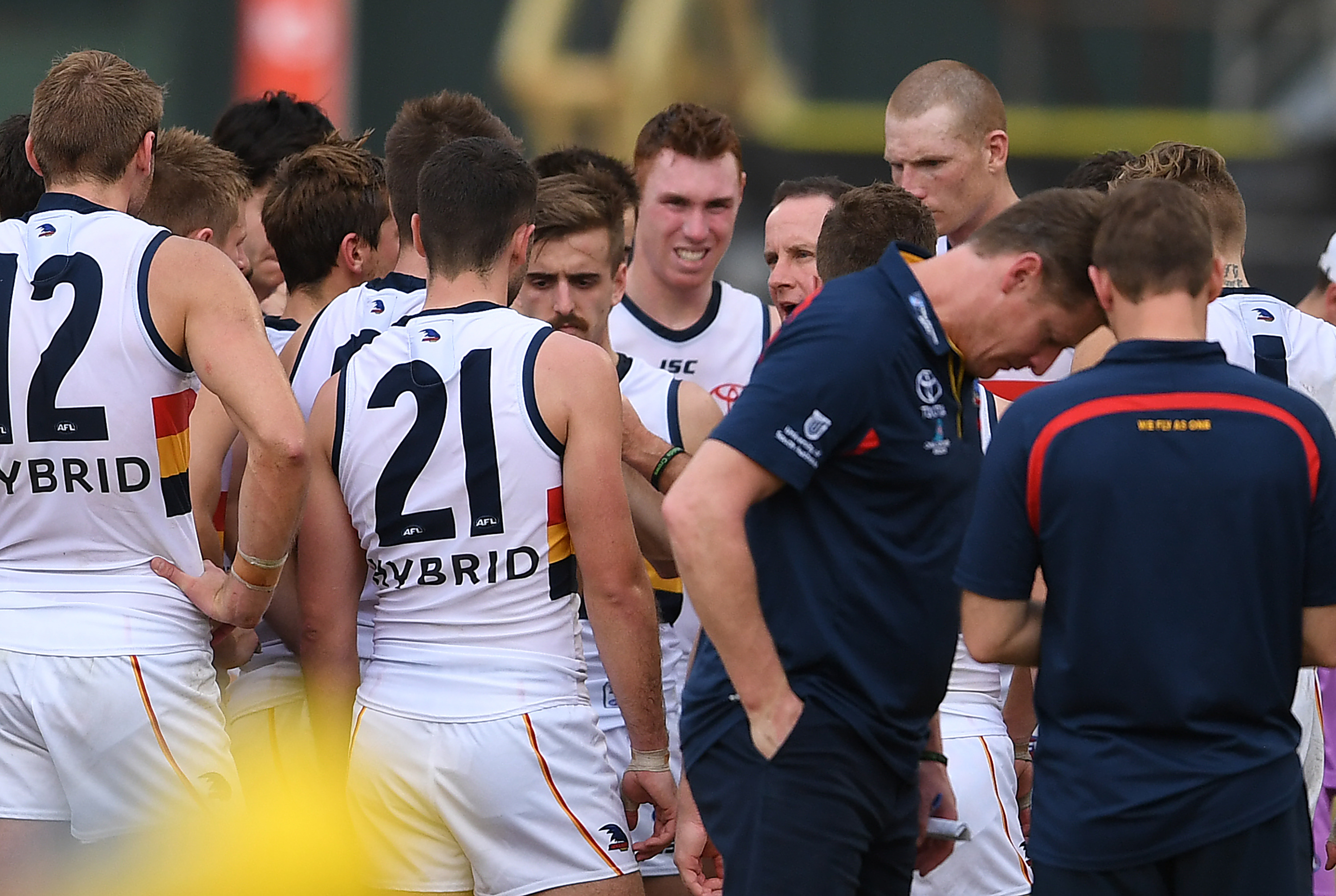 Little did I know it then, but the Melbourne game was to prove a coincidentally eerie throwback to the week he was born, some six and a half years ago now. I recall watching the Crows game on a small TV in our hospital room (well, I say ours, but I was really more of a squatter than a patient). Luckily, at only two days old my kid wasn’t paying a great deal of attention, because Adelaide lost the first AFL game he ever saw by 95 points, in a final-round drubbing by West Coast that saw off Mark Bickley’s coaching ambitions, if ever he had them.

And yesterday’s loss was the worst we’ve had since.

I’m not quite sure what it is in our collective Adelaide DNA that makes us play terribly when we meet our estranged former players for the first time.

After all the hype and hysteria about Tippett’s messy exit, he and his Swans blew us off the park when we finally took them on in late 2015, with ‘Ol Mate Kurt himself banging through three first-quarter goals.

In what is now quite a conflicting image, Kurt shows a couple of now-ex-Crows how it’s done. Photo: AAP

Then, when we were all up in arms about Dangerfield heading home to the Moggs Creek Moggies, we welcomed him back to town in 2016 by meekly surrendering in a final quarter collapse.

And then there’s Jack Gunston, whose 2011 departure to Hawthorn heralded the start of a five-year losing streak to the Hawks, over which time they played in four Grand Finals for three straight flags.

To be frank, if there was a sliding scale for ‘Making On-Field Statements After Suffering A Perceived Slight’, you’d have Geelong’s post-2008 Grand Final record against the Kennett-Cursed Hawks up at one end, and our record against former star players right down the other end.

Still, at least we taught Snake ‘Leaver’ (or should that be ‘Snake’ ‘Leaver’?) a valuable lesson in Loyalty: don’t make decisions based on personal financial gain coupled with playing better football in a more vibrant and economically viable state, because you may end up feeling bad. Or, y’know, you may not.

But we didn’t just show Snake. We showed all the doubters. Anyone who ever mocked our peculiar preseason regime. Who said we’d be better off training than driving around for days on end listening to the Richmond club song on autorepeat over and over and over again. Who scoffed as a third of our squad (and the better third at that) went down with an array of soft tissue debacles as we collectively became intensely Hamstring Aware.

Because, while the scoreboard didn’t reflect its brilliance, yesterday was actually the zenith of our Mind Training experiment, the moment we collectively broke through the limitations of the physical and became, literally, collective minds.

For, at the three quarter time huddle, coach Don Pyke had no need for words. Instead, he conveyed his thoughts about the team’s performance thus far – through Mindfulness.

It was a powerful moment, as Pyke looked deep within the souls of the gathered players and telepathically fired off a round of Mind Bullets whose devastating message never deviated from its target: 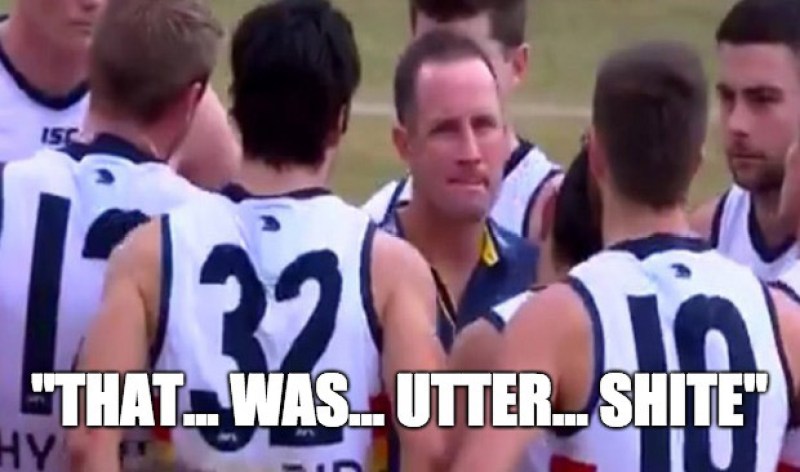 Unfortunately, our Mind Control had its limitations; the spell was broken about halfway through the last, when David Mackay’s slightly strange effort to levitate the ball over the goal-line for a behind using only the strength of his will was cruelly denied when Jake Melksham unfairly opted to kick it with his boot instead.

Still, if nothing else, it’s always nice to see veterans turn back the clock, and this display of ‘Vintage Mackay’ did add some much-needed levity to an otherwise dour afternoon. 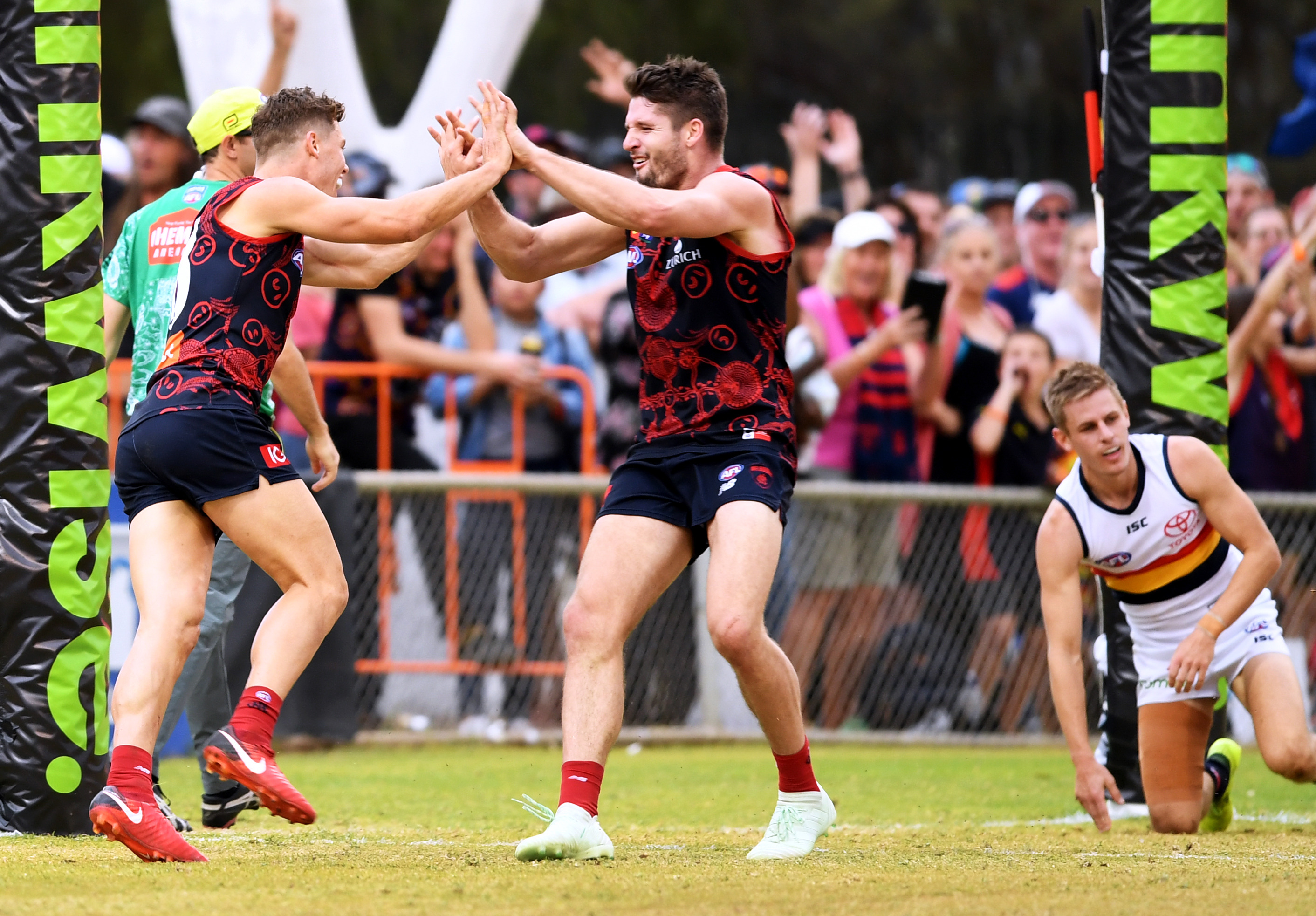 Melksham and Jesse Hogan celebrate while D-Mac has a think about what he’s done. Photo: Mark Brake / AAP

But the moment did kinda put the brakes on our quaint little last-quarter surge, allowing Melbourne to keep their record of 25,000 consecutive unbeaten quarters intact. Up until that point, we were exactly 11 goals down with 11 minutes to go. Which, according to the oft-referenced ‘Leigh Matthews Theorem’, meant we could technically still draw the game.

But while we focused on our collective minds, Melbourne focused on kicking our Collective Behinds, running away to a 15-goal stroll in the park. Or desert, as the case may be. 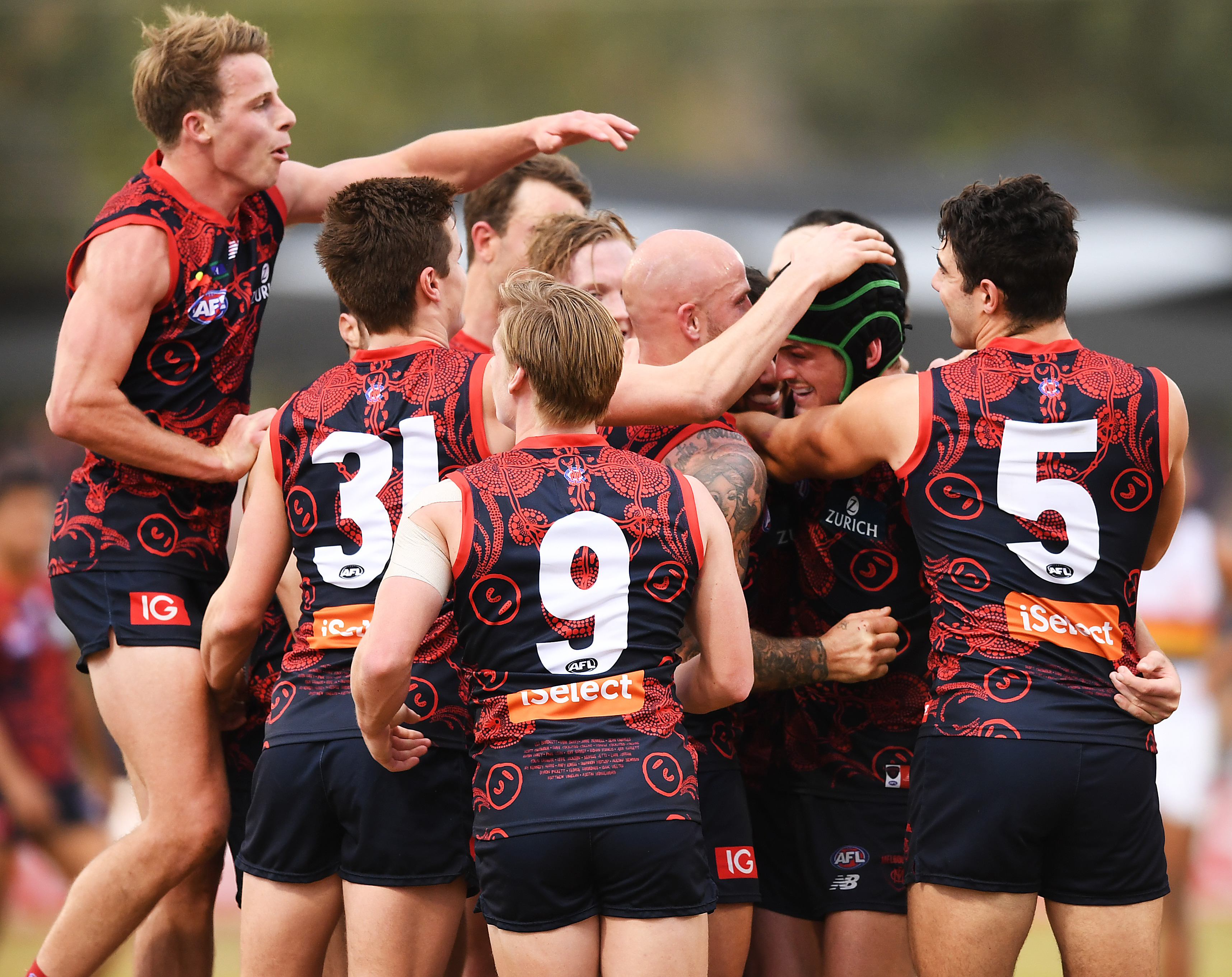 But let’s focus on the positives.

It is possible to bounce back from isolated shellackings and win a flag in the same year.

Port, after all, lost by 90-plus points to North Melbourne before they went on to win their (only) premiership.

Likewise, Richmond last year suffered a hefty defeat (by us) before progressing to their Grand Final walkover (of us).

And even the Lions later admitted that their early noughties three-peat was set on course by a 12-goal thrashing from Carlton.

So there’s that flimsy straw to clutch on to.

Plus, in further Good News, we’ve already garnered plenty of mental torture material for our next Mindfulness Camp, where I’m sure the players will be forced to watch this postmatch interview with Snake over and over again for days on end.

And, on a woeful weekend, there was one more consolation: at least there was no chance of Port getting a win.

Their post-Shanghai bye also ensured another significant solace: that we finished the weekend above them on the ladder, albeit tenuously and temporarily.

Not that I’m annoyed, of course.

Not about our showing against Melbourne, at least.

Because the fact is, we were never in the game.

No, what annoys me are the ones we should have won: the season opener against an Essendon outfit that turned out to be nowhere near as good as we let them be. That infernal Showdown.

There are losses you have to have, and there are those that should never have happened. And they’re the ones that will cost us at year’s end.

Anyway, all we can do in the short term is attempt to beat GWS next Sunday, in what now looms as the Battle To See Whose Premiership Window Is Closing Quicker.

And at least it’s nice to have another item on my list of Places I Never Want To Hear Mentioned Again: 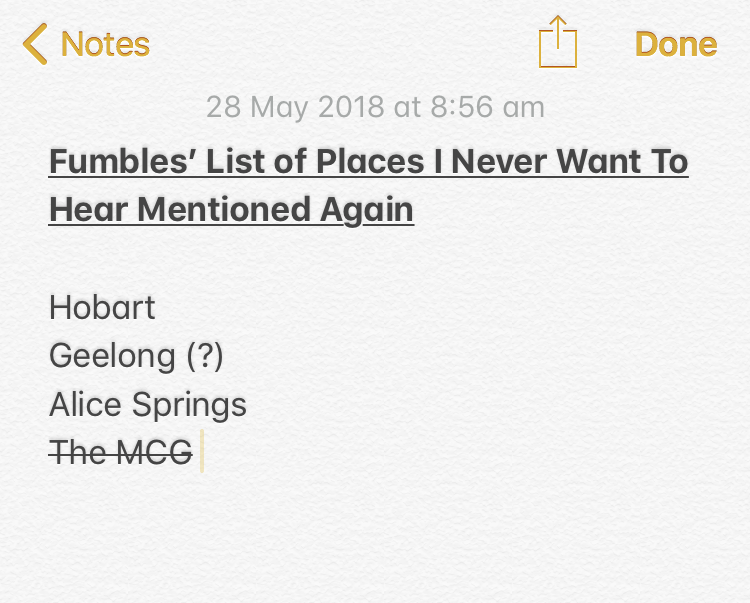 Note: I wasn’t sure about Geelong despite our horrible record there, as I have a stubborn soft spot for Whatever-It’s-Called Stadium because the only game I’ve attended there was in 2002, when Roo led us to a three-point victory and Ayresy gave the two-finger salute to his former crowd.

And, despite obvious recent negative associations, I opted to remove the MCG because – putting aside the fact we’re schedule-bound to play there at least twice more this season in any case – I’m obviously quite keen to see my team take part in a certain key fixture there again one day.

Although on the strength of yesterday’s performance, it won’t be anytime soon.

On that note, Touch Of The Fumbles is taking an extended midyear ‘Mindfulness’ break, and will return after the bye rounds next month.