I used to get a bit annoyed sometimes when I’d head out to West Lakes for what turned out to be a really boring game. Still, one can’t complain – imagine going all the way to China…

True enough, you can probably do a spot of sightseeing while you’re over there, but the same can be said of West Lakes which, after all, does boast its own Westfield, complete with a reasonably well-stocked Food Court – and who needs a Great Wall when you’ve got a great mall?

But there appears to be some kind of diktat that Port Adelaide’s annual Shanghai Suns spanking must boast an entertainment value inversely proportional to the amount of hype it generates in the preceding week.

Given the standard of football on offer, it seemed the weather was the only thing taking Shanghai by storm. 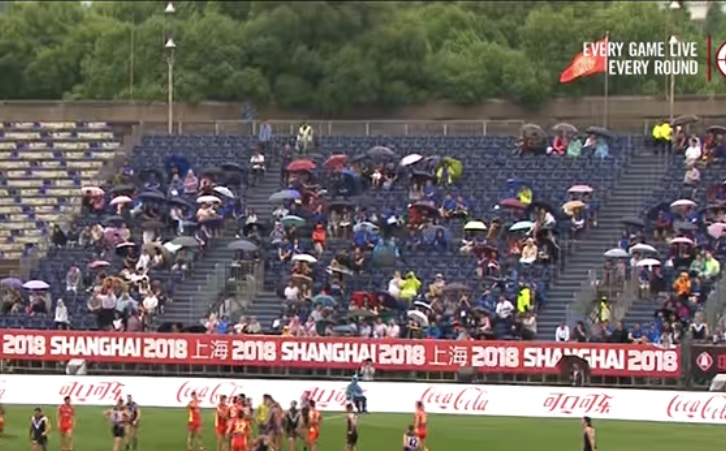 Still, there was some solace in the wake of last week’s shiteful Showdown loss that its perpetrators and a few of their more bolshy supporters swiftly quit town for a few days.

I did start watching the game, but after a few minutes I suddenly remembered a lot of Very Important Other Things I would rather be doing, such as organising papers for next year’s tax return. However, I kept an ear on proceedings, and heard that in the end Port had 82 to the Suns’ 42. Which I assumed referred to the number of supporters who’d bothered going over, but it actually turned out to be the final score.

There did seem to be quite a few spare seats in that weird medieval castle/stadium thing, though. Maybe a few of their thousands of supporters who flew over noticed it was raining and decided to stay at the hotel and watch the game on the telly instead? Apparently Port took 600 kilograms of luggage over to Shanghai – didn’t anyone think to pack the tarps?

15 mins til bouncedown at Jiangwan Stadium. There’s been showers all day but fair to say the AFL were hoping for a better turnout than this… #AFLSunsPower pic.twitter.com/jkMoqACwXk

But on further inquiry I discovered that the stadium was actually at full capacity and there was not a spare seat in the house, and also that the game was an enthralling and high-quality contest that was enjoyed by all. Which must be true, because I heard on the Communist Party’s state-run China Central Television. Or maybe it was the AFL’s media unit, I forget. (Yes, I know I made a very similar gag last year, but I’m obliged to use it again under the same ‘One Year Rule’ that allows the TV media to trot out identical Boxing Day Sales stories every 12 months with an obligatory opening shot of shoppers stampeding beneath an opening department store roller-door).

Port have a content arrangement with China’s national broadcaster, so the weekend’s game was the second time this year that Sam Powell-Pepper has appeared on CCTV.

And, much like the previous time, most of his touches were contested. 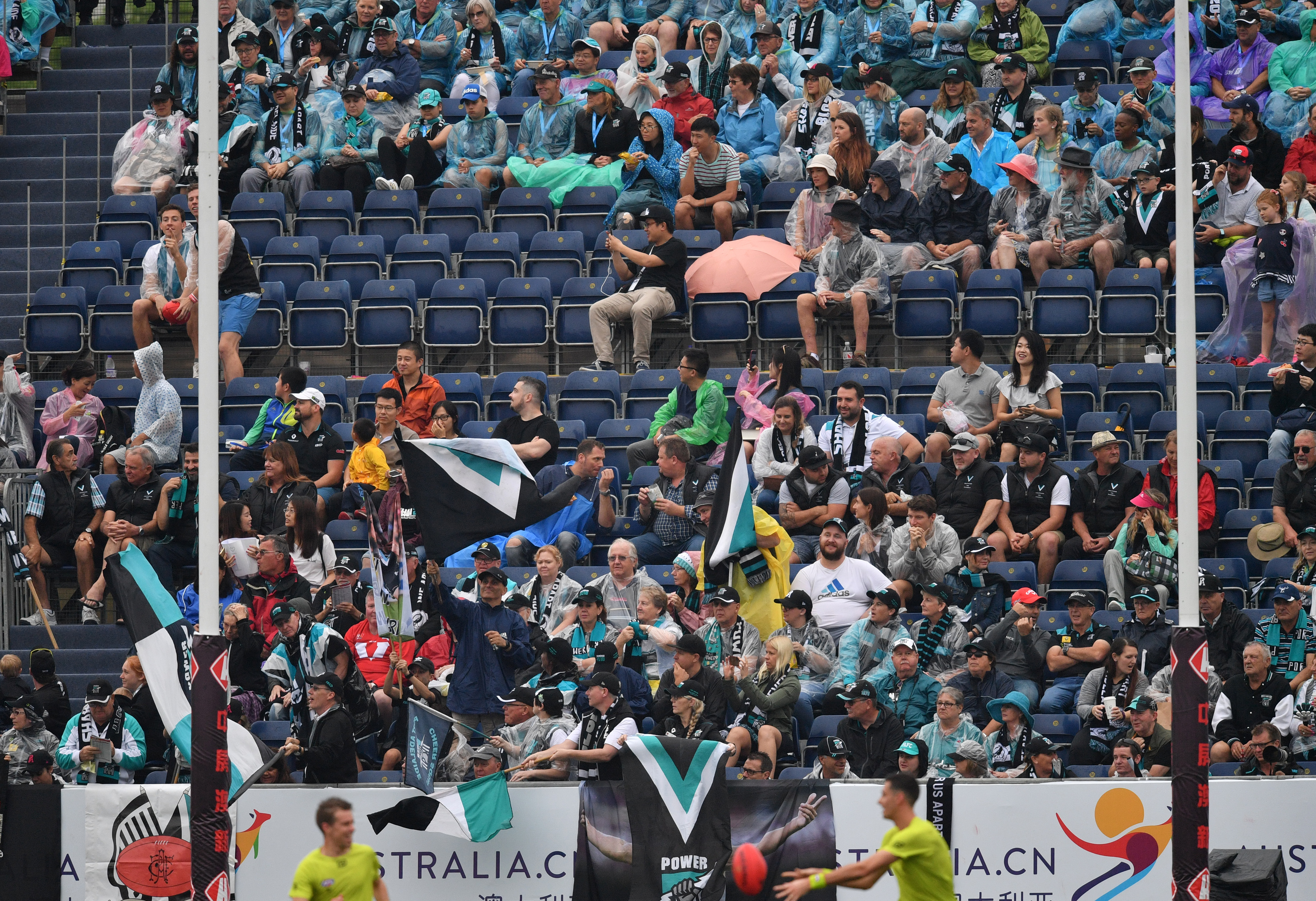 One of the more populated areas of Jiangwan Stadium. Photo: David Mariuz / AAP

Port’s broadcast deal meant that Saturday’s slog was apparently “the most-watched game in AFL history”. Which, after Jessica Mauboy at Eurovision, means Australia has now blown its international showcase twice in as many weeks.

But while it’s easy to poke fun at Port’s China experiment (fun too!) back here in SA we can’t really complain too much about the media-management methods of foreign dictatorships, given their evident influence in our regular injury updates. 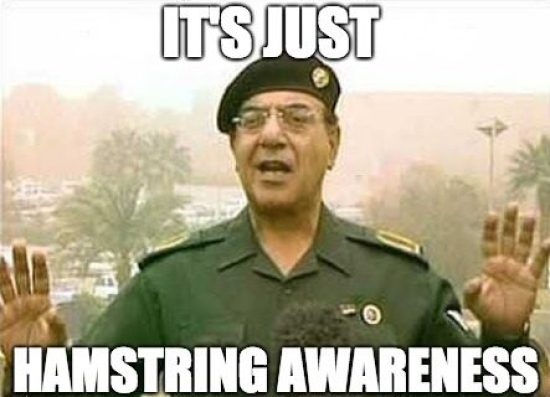 Honestly, I think it’s fair to say by this point that we all have very acute Hamstring Awareness. Even if no-one actually seems to know what the hell it means.

But given the likes of Matt Crouch, Walker, Betts, Hartigan, Knight, Milera and Murphy have all fallen foul of hamstring pings this season, and with nine first-choice players out of contention for Friday night’s win over the Bulldogs, it’s safe to say the off-season could probably have involved less Mindfulness Training and more stretching.

Unless of course this fabled ‘Hamstring Awareness’ is a state that can only be achieved in an advanced state of Mindfulness. 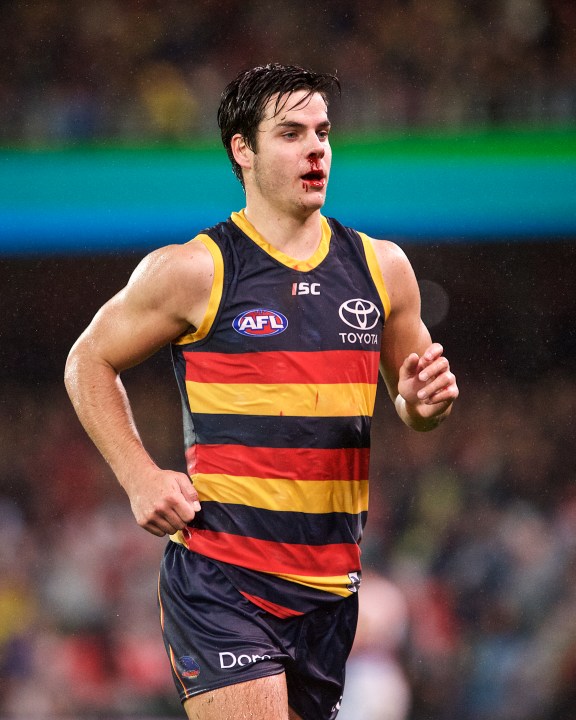 Anyway, if the Crows are looking for a new brand-relevant sponsor anytime soon they should probably talk to Sorbent, given they both seem to deal in soft tissues that can tear off easily. (Yes, I know I made a very similar gag last year, but as discussed I’m allowed to use it again under the aforementioned ‘One Year Rule’).

In hindsight, there was a pretty clear warning sign when Sam Gibson – a player who literally hadn’t missed a game in his entire AFL career – was withdrawn from the Round One side with a minor hamstring tweak that ended up being a two month ordeal.

Seriously, the guy plays a league-leading 130 games straight, and then comes over to Adelaide and immediately writes off half his season.

It just seems such an inherently Adelaide thing to do – to take something that’s working well somewhere else and immediately screw it up. 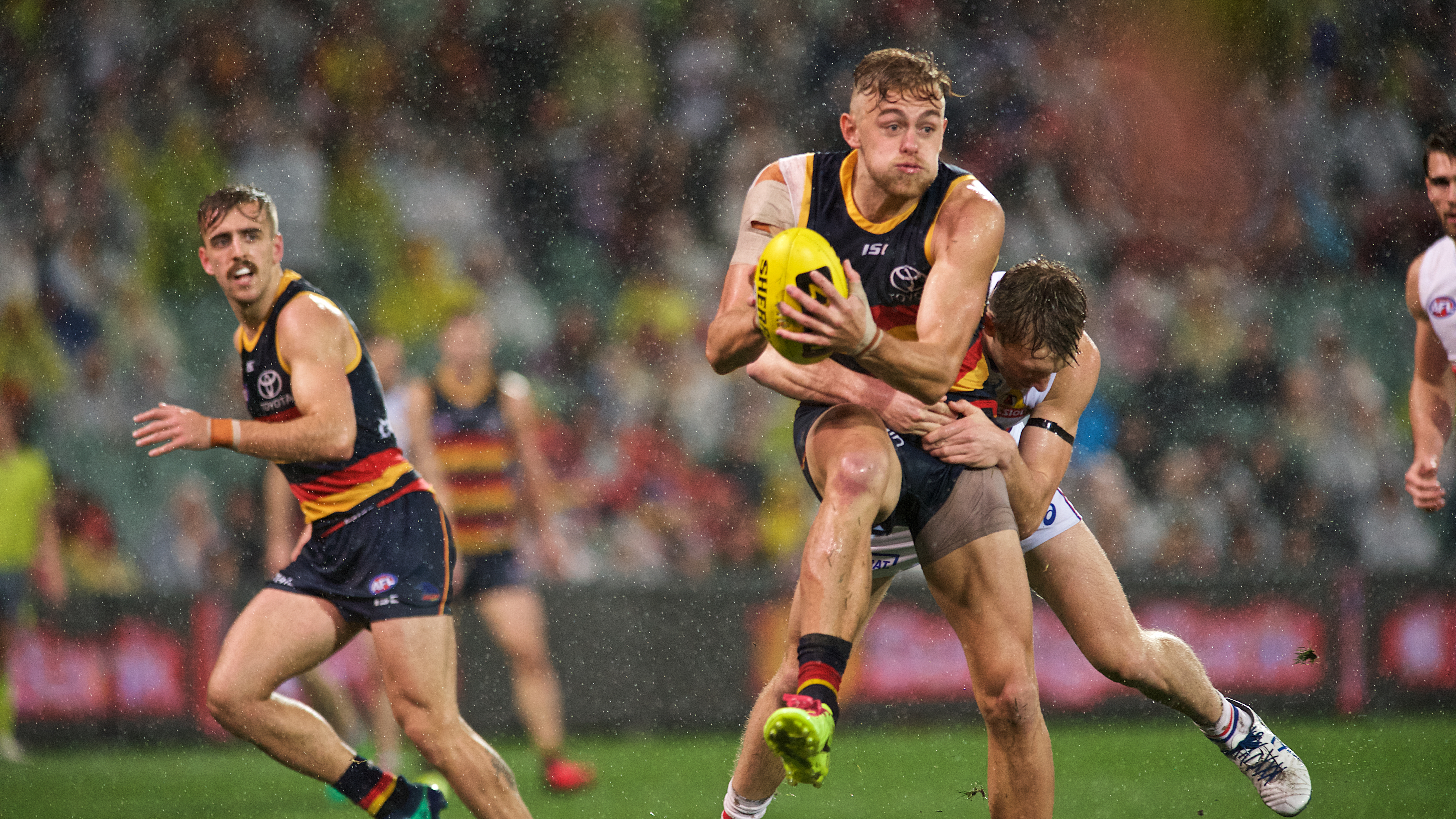 With the exception being Hugh Greenwood. Photo: Michael Errey / InDaily

But if the injury list isn’t bad enough, the weird mixed messages about it could have been lifted from the media-management handbook of Port’s Chinese hosts.

“Brad Crouch is progressing as we expected. He’s done a lot of strengthening work.” #weflyasone

Recent days have been a timely reminder that supporting the Crows is an experience entirely consistent with the South Australian condition: namely, that you defend it incessantly while concurrently lamenting the way it’s run.

Don Pyke himself did his best to put a positive spin on things in his weekly media conference last week, conceding “we’ve had some setbacks in terms of an availability viewpoint, but we have also created some opportunities for guys and seen some guys step forward”.

“The worm will turn,” the coach insisted. “In three weeks’ time we might end up with 40 guys available at which point we are dealing with a different scenario.”

Here is some footage of the press conference in question:

And speaking of the Black Knight, things are looking fairly black for Knight right now, after he was rested a few weeks back, which became a two-week layoff with Hamstring Awareness (that old chestnut), and is now an indefinite absence with Hamstring Tendinitis.

These days, whenever I hear of Crows players being dropped while they nurse a minor complaint, I think of the final known words of Antarctic explorer Captain Lawrence Oates: “I’m going out now, I may be gone for some time…” 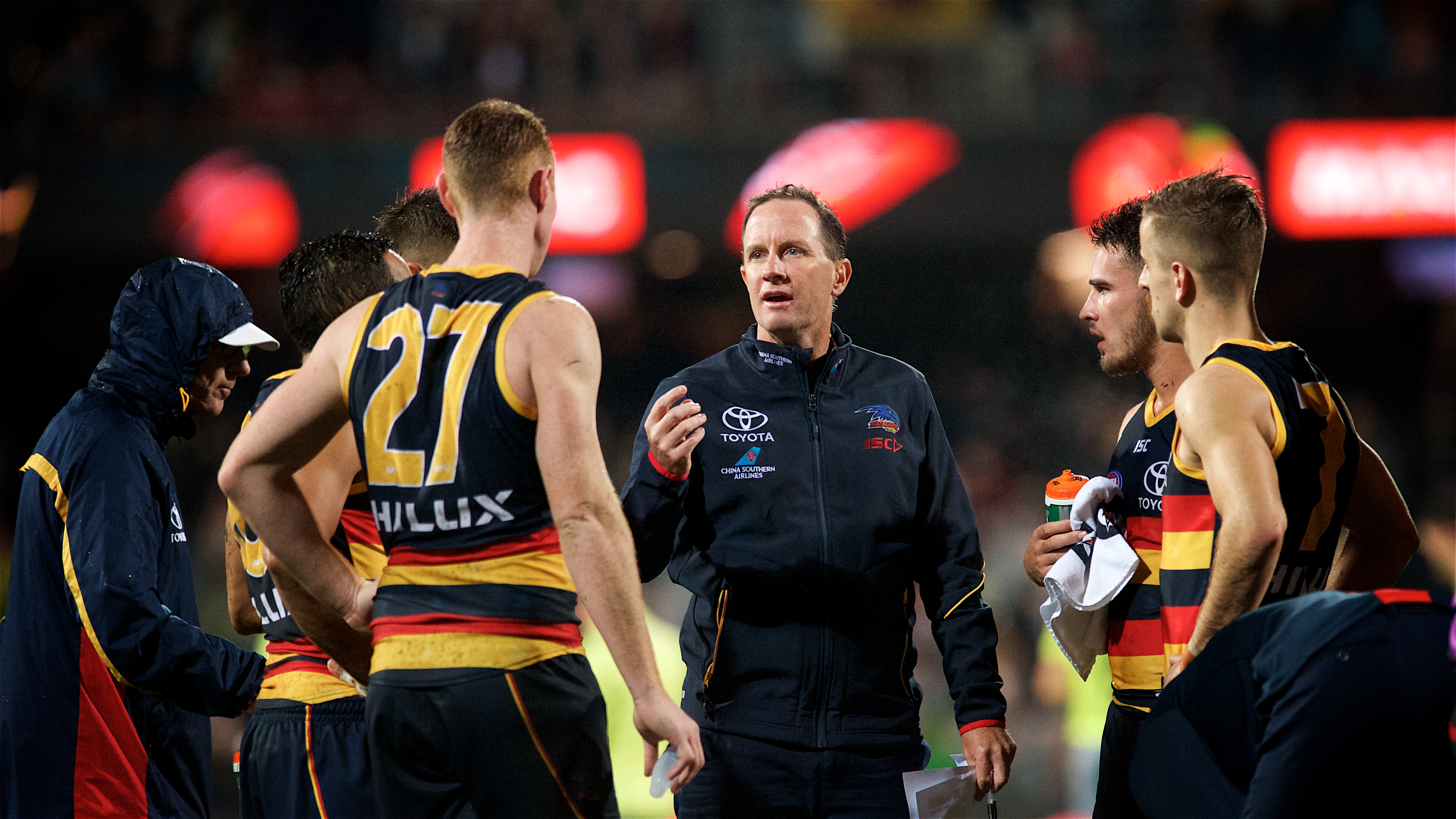 Take poor old Mitch McGovern, for instance, who went from kicking what should have been the winning goal in a Showdown to being cleaned up in a comical marking contest attempt a few seconds later. If it wasn’t bad enough that that particular moment of madness helped hand Port back the lead – and the game – it later turned out that the in-form forward will now miss the next eight weeks with a serious ankle sprain sustained in the same collision. Honestly, the last 40 seconds of that game is the gift that keeps on giving…

It now appears that what could have been the best minute of our season will probably be the moment that derailed it completely.

And not least because it cost us four premiership points that would have put some distance between us and the chasing pack – and could yet prove the difference between a top four berth and another wasted season. 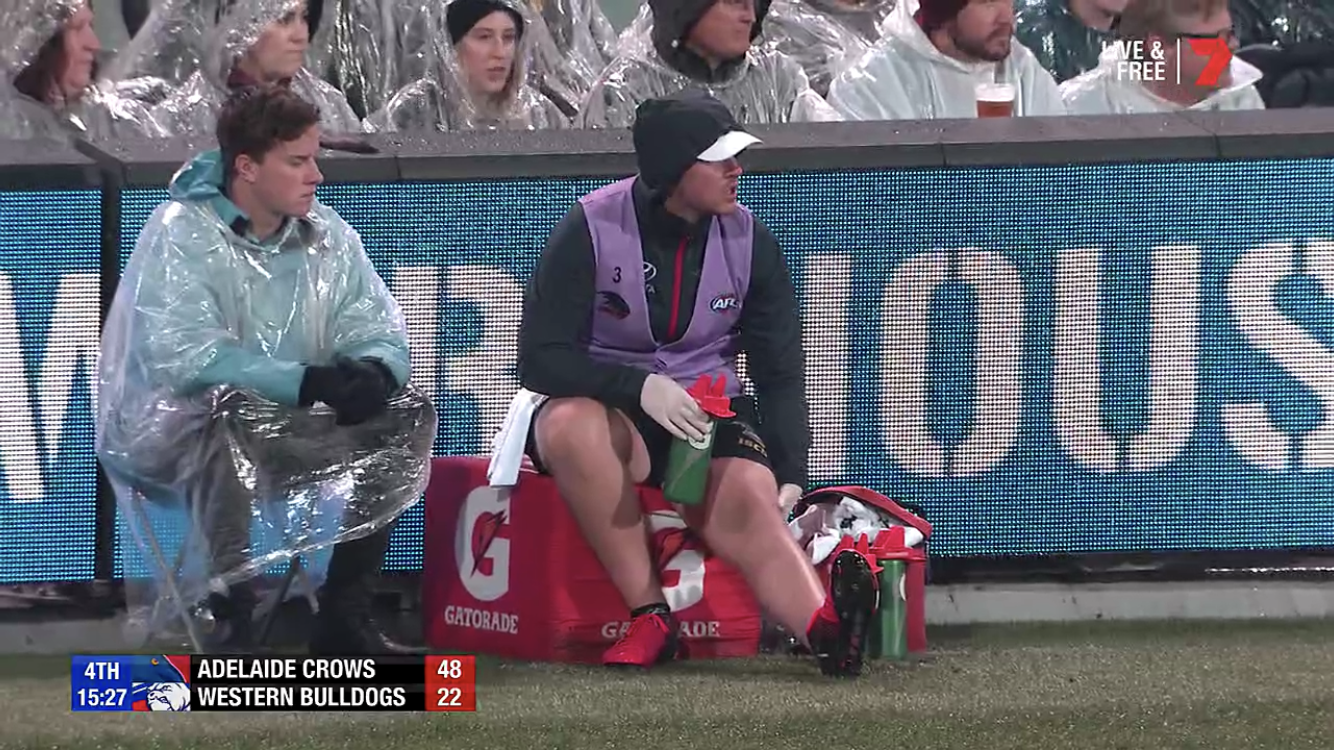 As the injuries pile up, all I can think is that, but for about three minutes of ineptitude across two games, we could be 8-1 instead of 6-3, and the Hamstring Awareness Crisis might be neither here nor there.

Which is quite a frustrating realisation, because it amplifies the importance of almost every other game on any given weekend.

Yesterday, for instance, with that top-of-the-table clash out west; while I joyously reveled in the once-familiar sight of Richmond getting thumped, it quickly dawned on me that we’re still yet to play West Coast this season…

But then, it was truly a weird round of football, starting with our victory under a Biblical deluge that was actually pretty gutsy, all things considered.

The weather forecast said the heavy downpour that had been on and off all day would pass before the first bounce, but that turned out to be as reliable as our Injury Update. 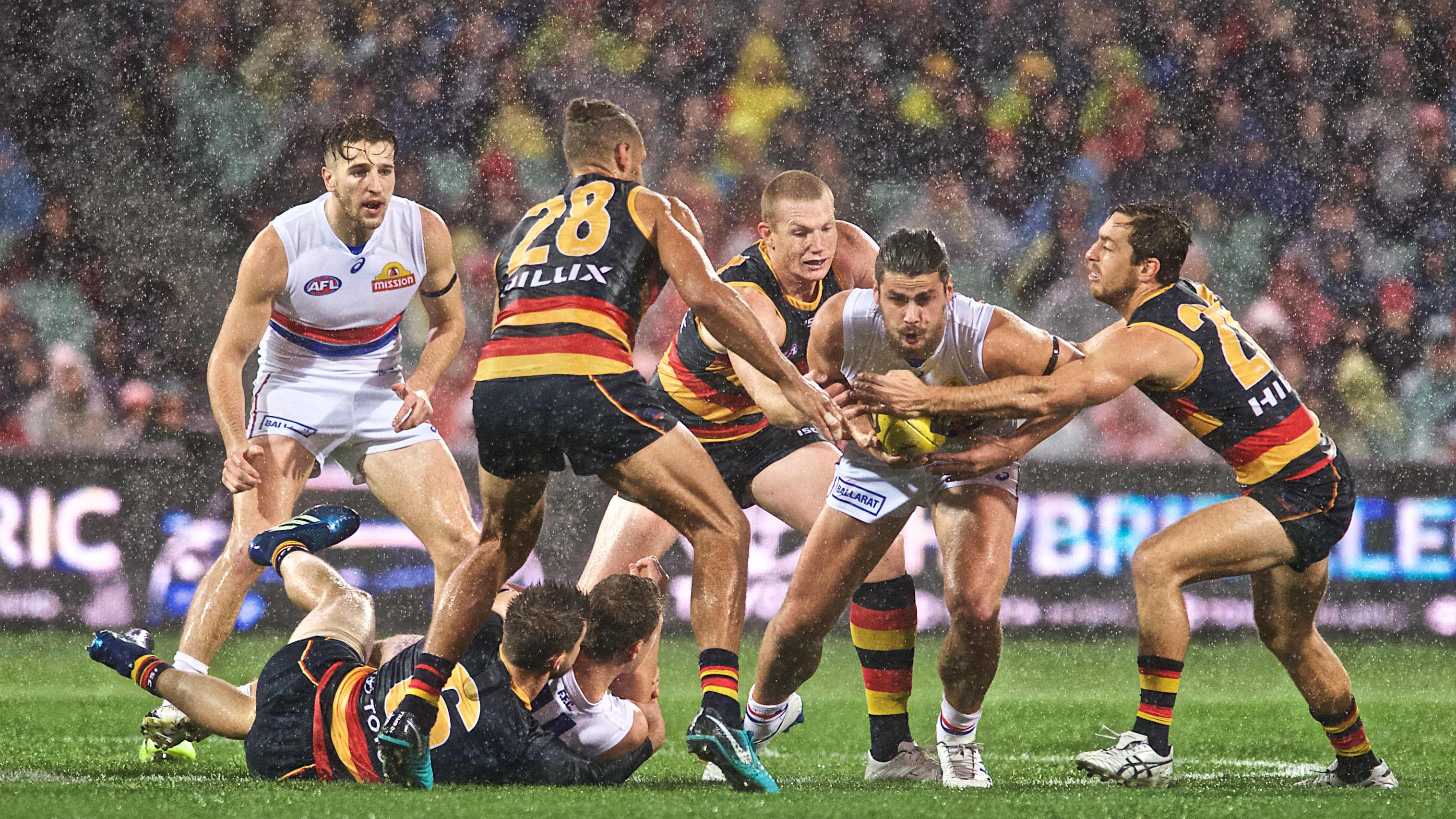 Most of Saturday’s games were overshadowed by Royal Wedding fever, with Essendon paying tribute to the happy couple by batting well above their average.

The Bombers were up and about, having just fired Mark Neeld, while the Cats were playing as though they’d just hired him.

Still, their defeat – and that of the Hawks – helpfully put us a game clear of a couple of prospective finalists.

The Saturday night matches were predictable non-events; I gave up on the St Kilda game altogether and instead watched Prince Harry’s nuptials, where it at least seemed likely someone might eventually score. 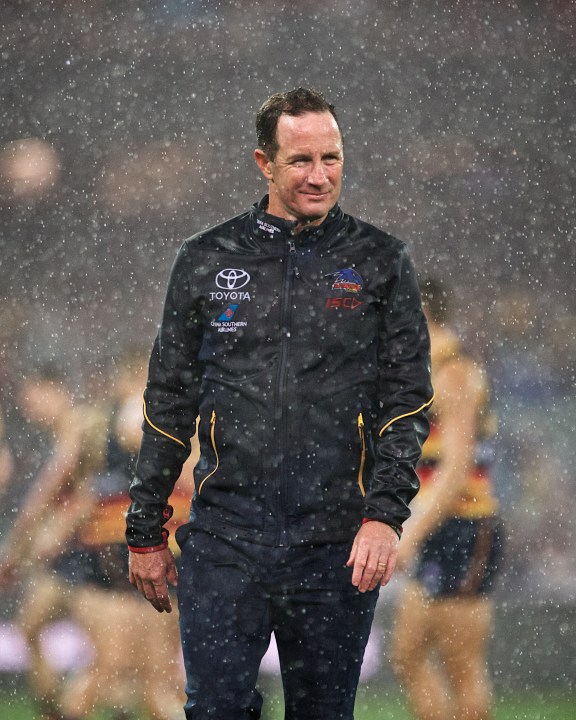 But annoyingly again, I couldn’t enjoy yesterday’s Carlton bloodbath without the looming sense of dread that we have to play the Demons this Sunday.

I’d been looking forward to us playing (and beating, obviously) Jake ‘The Leaver’ Lever’s side ever since he… well, left. But playing the Dees now, with half our forward line and most of our midfield decimated by an injury (awareness) crisis, wasn’t really how I envisaged things going down.

It’s a bit like running into your ex-girlfriend: you want to make sure you’re dressed to the nines, with a nonchalant arm draped around your much-better-looking new squeeze. Not face down in a gutter sobbing into your own vomit about your life’s decline and fall.

So let’s just say I’ve got a bad feeling on this one.

But we live in hope. Intimations of on-field disaster are, after all, a bit like our Injury Updates.

They can always turn out to be way off the mark.