Few gave the Crows any chance to win this one. On paper, we were done.

I’m referring, of course, to Round 4, 2001, when Adelaide jetted to a sodden Optus Oval (née Princes Park) to take on a high-flying Carlton that had just inflicted the all-conquering Bombers’ first defeat of the season – and only their second in 28 games.

The Crows, by contrast, were coming off three straight losses to start the season – a Showdown smashing and an SCG belting by Sydney sandwiching one of the more galling of our patented ‘Defeats-from-the-jaws-of-victory’, when Andrew Leoncelli kicked the Dees back into the lead with just seconds on the clock. (The fact that I wrote about that particular match not once, but twice last year alone is probably some indication of how annoying this was to me; Melbourne haven’t even played finals for 12 years and I still haven’t quite forgiven them).

So it was, theoretically, one of the more lop-sided matchups in Adelaide’s history. The only questions surrounded the magnitude of the impending loss, and what it meant for the troubled tenure of Gary Ayres.

And yet, as you probably already know, we didn’t lose.

Led by a domineering four goals to the skipper, Adelaide transcended expectations to steal a narrow win in enemy territory, in what is generally regarded as one of the better home and away victories in the club’s history.

I mention all this, of course, because going into Friday night’s fixture against the Swans, I’m not sure I’ve been as confident of a looming loss since Adelaide somehow turned that grey day in Carlton into a little piece of nostalgic silver, 17 years ago this past weekend.

In other words, I haven’t been so objectively certain of defeat (as opposed to just saying ‘I think we’re going to lose’ to avoid disappointment) for almost two decades.

Sure, there have been plenty of times the team has been struggling, but no single game springs to mind that appeared such a perfect storm of lost causes.

Playing the premiership-fancied Swans on their home deck, without five of our 2017 top 10 players and then some, including basically our entire starting midfield and our leading goalkicker from the past four seasons, and coming off our poorest minor round loss in recent years, the best that could be said for this match was that it was a tipster’s dream.

The only questions surrounded the magnitude of the loss, and what it meant for our troubled campaign to atone for last year’s final act.

And yet, as you’re no doubt aware, we didn’t lose.

Led by a domineering four goals to the skipper, Adelaide transcended expectations to steal a narrow win in enemy territory, in what surely will be regarded as one of the better home and away victories in the club’s history.

It was a hell of a thing. 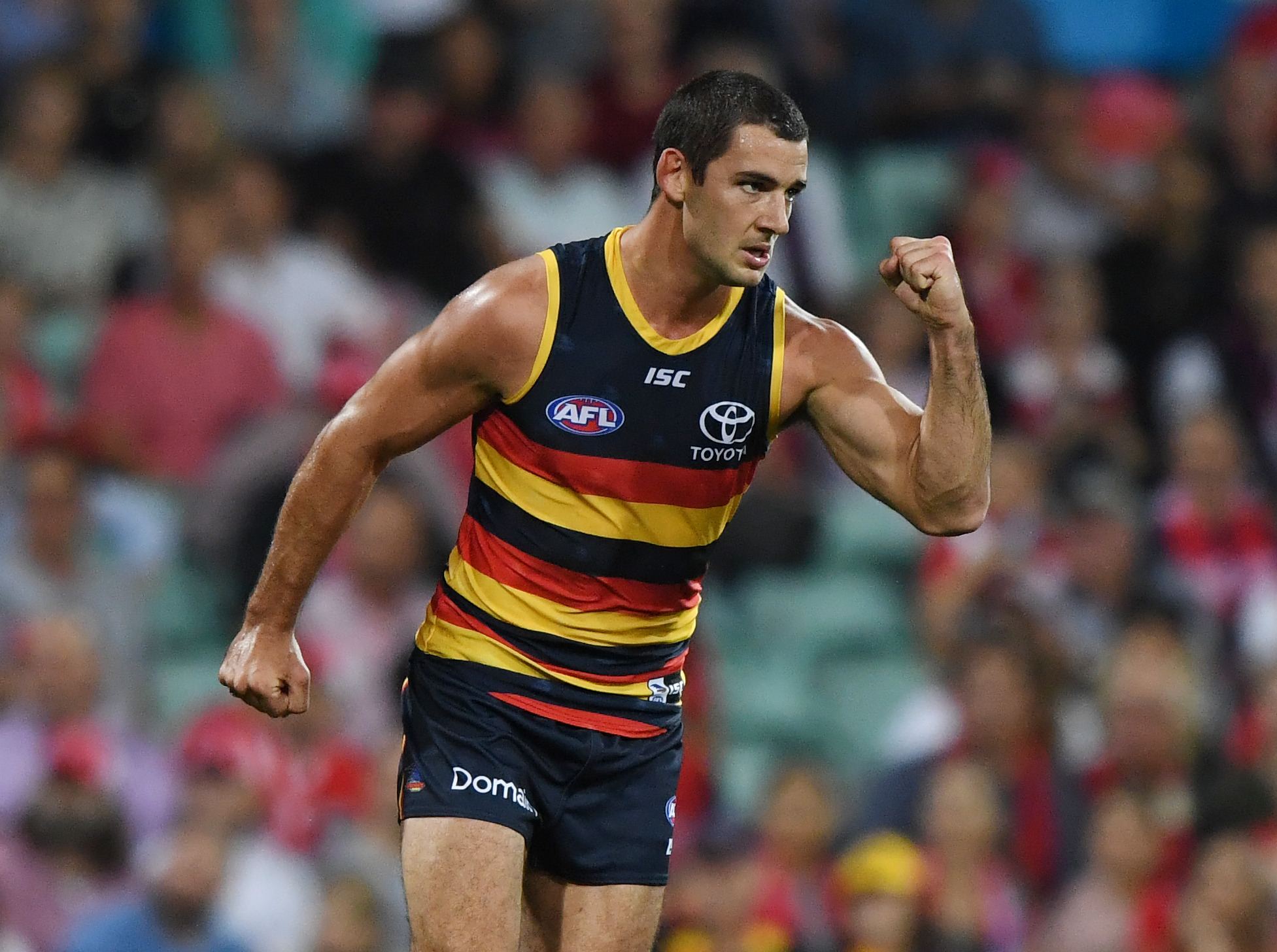 Made all the more remarkable by the prevalence of players whose career games tally can be counted on one hand. Doedee was playing just his fifth match and was surely due to hit the wall at some stage, right? Poholke was making his long-awaited debut, while Gallucci came in for his second AFL game, almost a year since his first.

For those, like myself, who tend to quietly (or loudly, as the case may be) lament Don Pyke’s apparent aversion to blooding new players, it loomed as one of those ‘Be Careful What You Wish For’ scenarios.

Adelaide debutants, apparently, are like buses: you wait around for ages getting annoyed, and then they all turn up at once.

And just as with the buses, your initial excitement is generally tempered by the realisation that most of them will be of no use to you whatsoever.

Not this time though.

Doedee was, again, among our best, Gallucci looked lively and bobbed up with the sealing goal, while Poholke can say what few can – that he made his AFL debut in a bona fide classic.

Because for the second time in 17 years, I got it thoroughly wrong.

How sad for me. 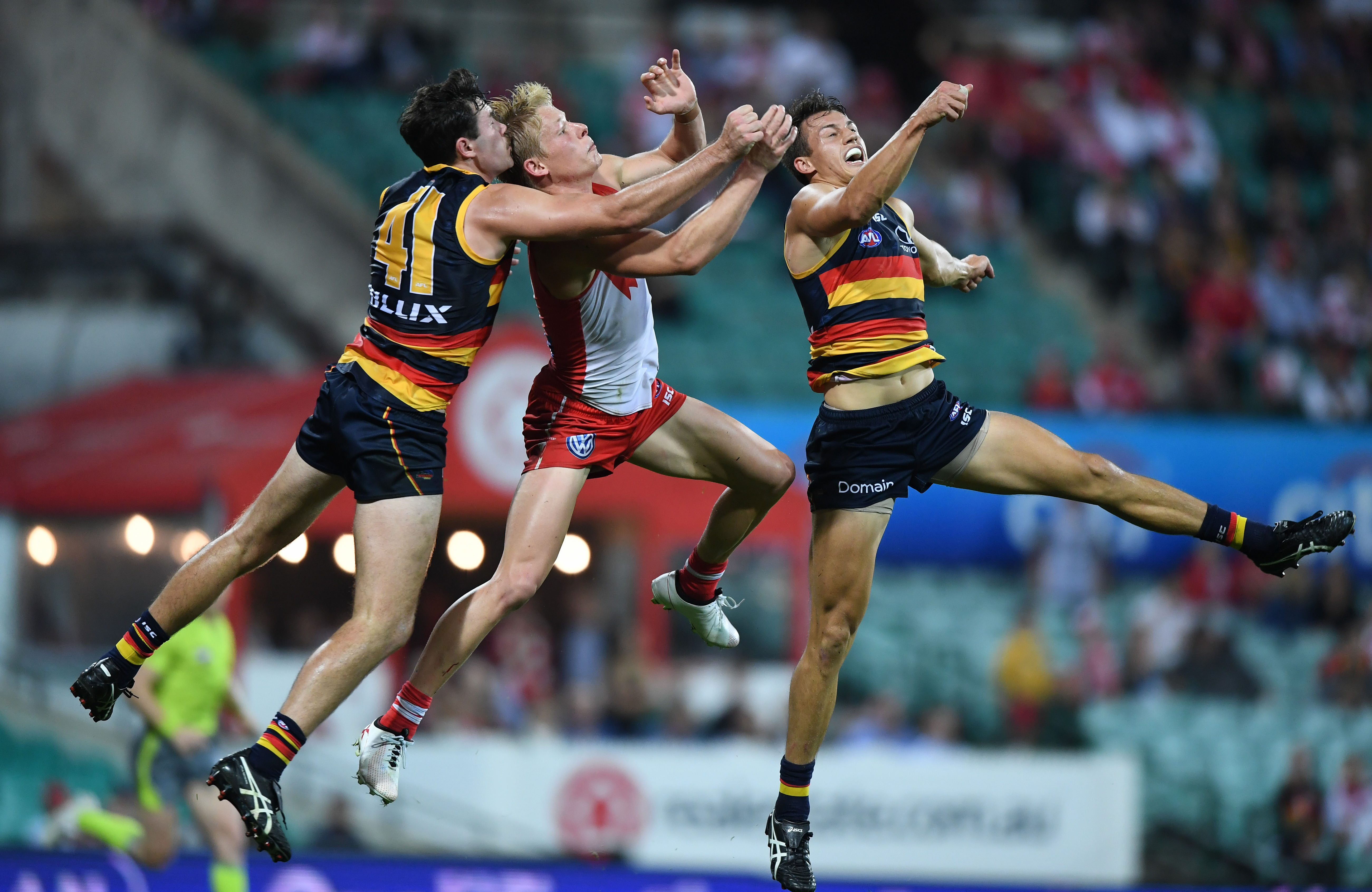 And the icing on the cake is that Port can’t really hang their hat on beating Sydney in Sydney anymore.

In fact, they can’t really hang their hat on anything much, after losing their second consecutive match, to an undermanned Geelong at home. 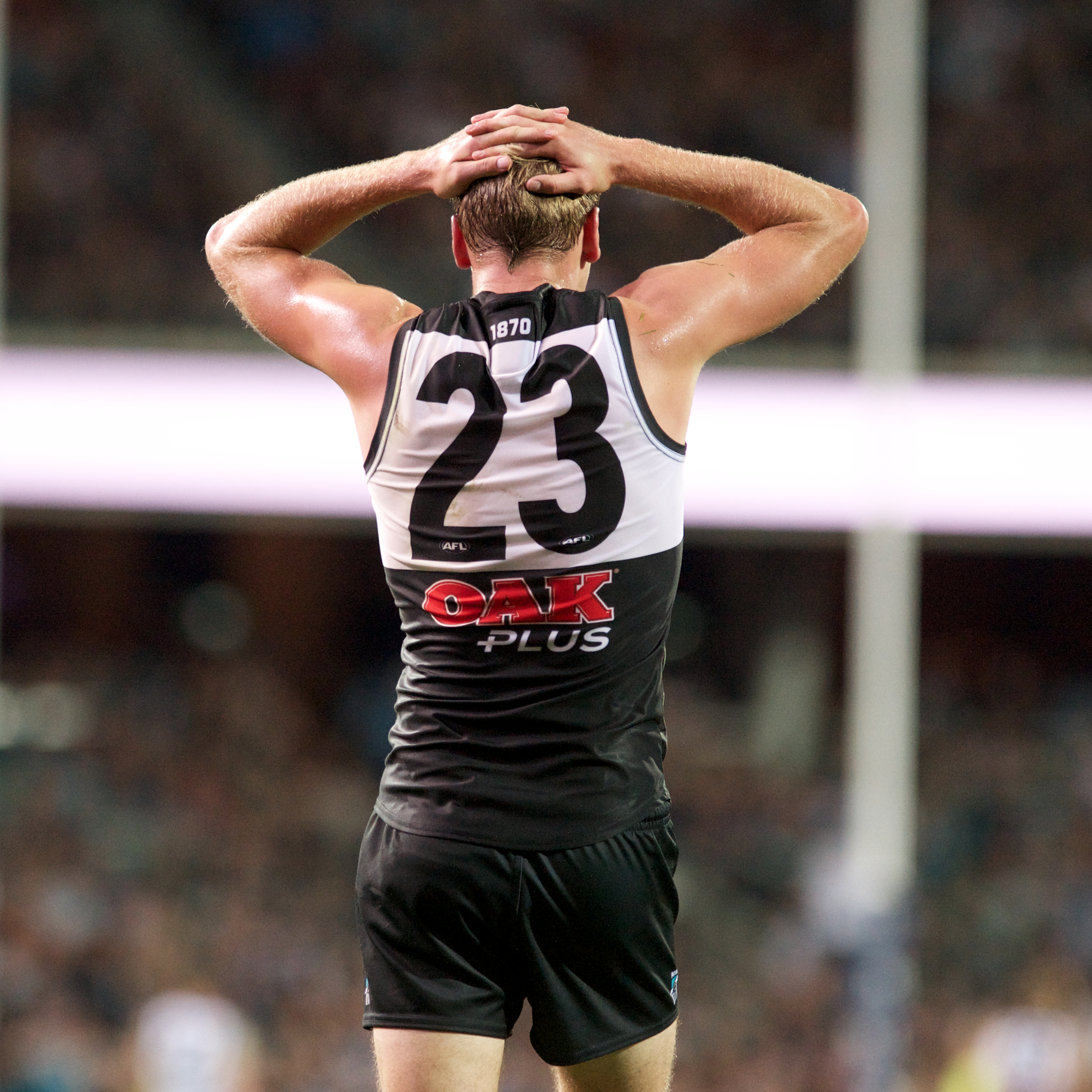 Although, to be fair, they’ve worked hard to make their annual loss to the Cats an enduring and endearing feature of the football calendar.

“We put it as our number-one priority every single year and we will continue to do that.’’

(He was actually talking about hosting a game during Anzac Round, but it works equally well when applied to losing to Geelong, I reckon.) 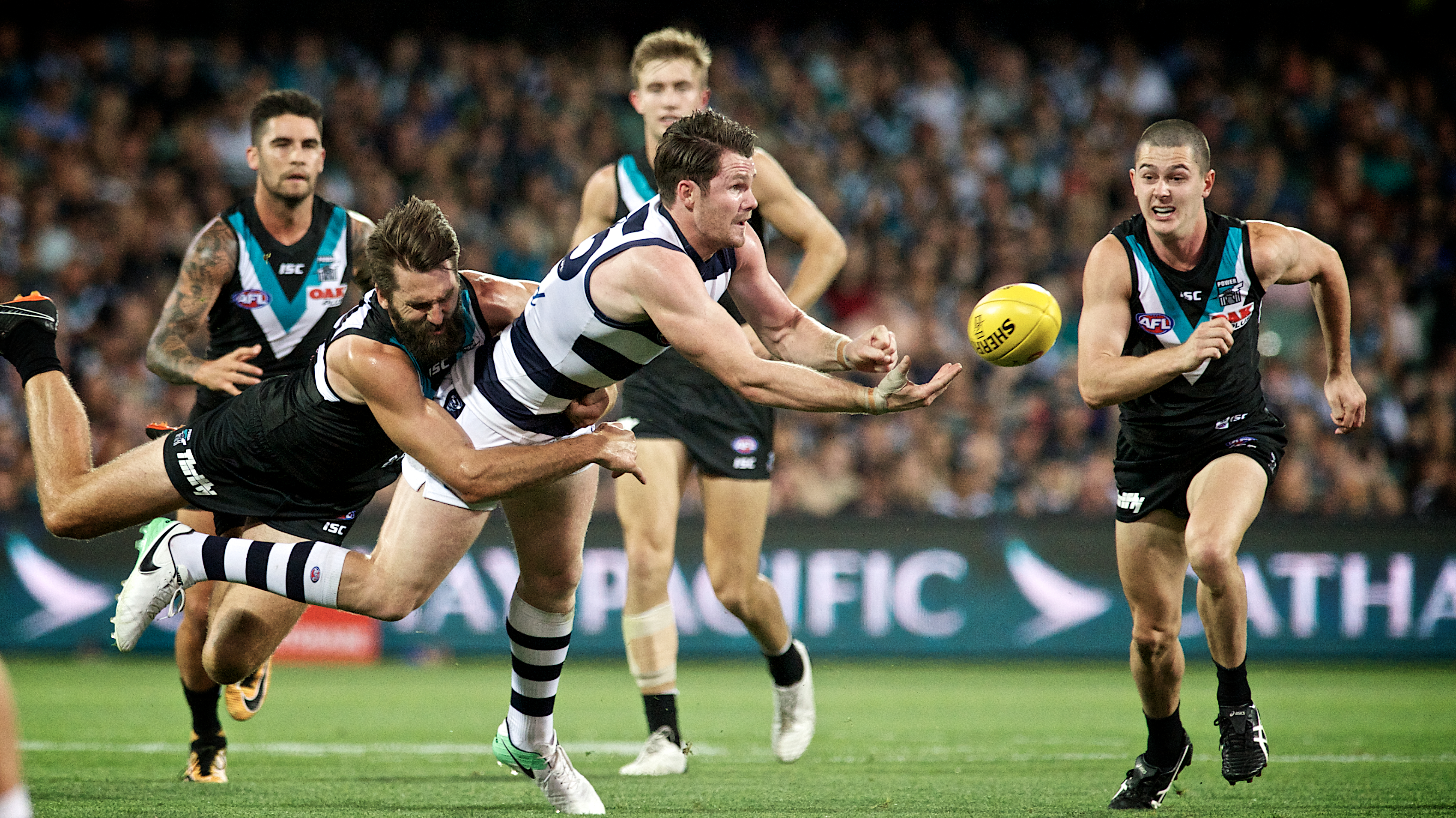 MIXED EMOTIONS: Paddy had a win, but at least it was at Port’s expense. Again. Photo: Michael Errey / InDaily

So sure, there were a few moments of gold during the Crows’ win with which I could regale you. Anzac Round specialist Paul Seedsman’s boundary-line major in the third term to halt Sydney’s charge, for instance. Or the one where Buddy failed to play on in front of goal and got gang tackled before the Seed sailed the ball back to Rory Atkins for a running goal from 50, which was quite possibly the best thing that has ever happened.

The Crows turn defence into attack as Rory Atkins slides one home!#AFLSwansCrows pic.twitter.com/QibOOGKQyr

But really, none of them quite matched the comic brilliance of Jack Watts leaving the ball behind as he ambled into an open goal with enough time on the clock to turn things around.

You can take the boy out of Melbourne, but… well, you get the idea.

Still, at least the Power were able to give Lindsay Thomas another crack at senior football; the poor guy must have been starting to think he’d served his last suspension. Heart-warming. 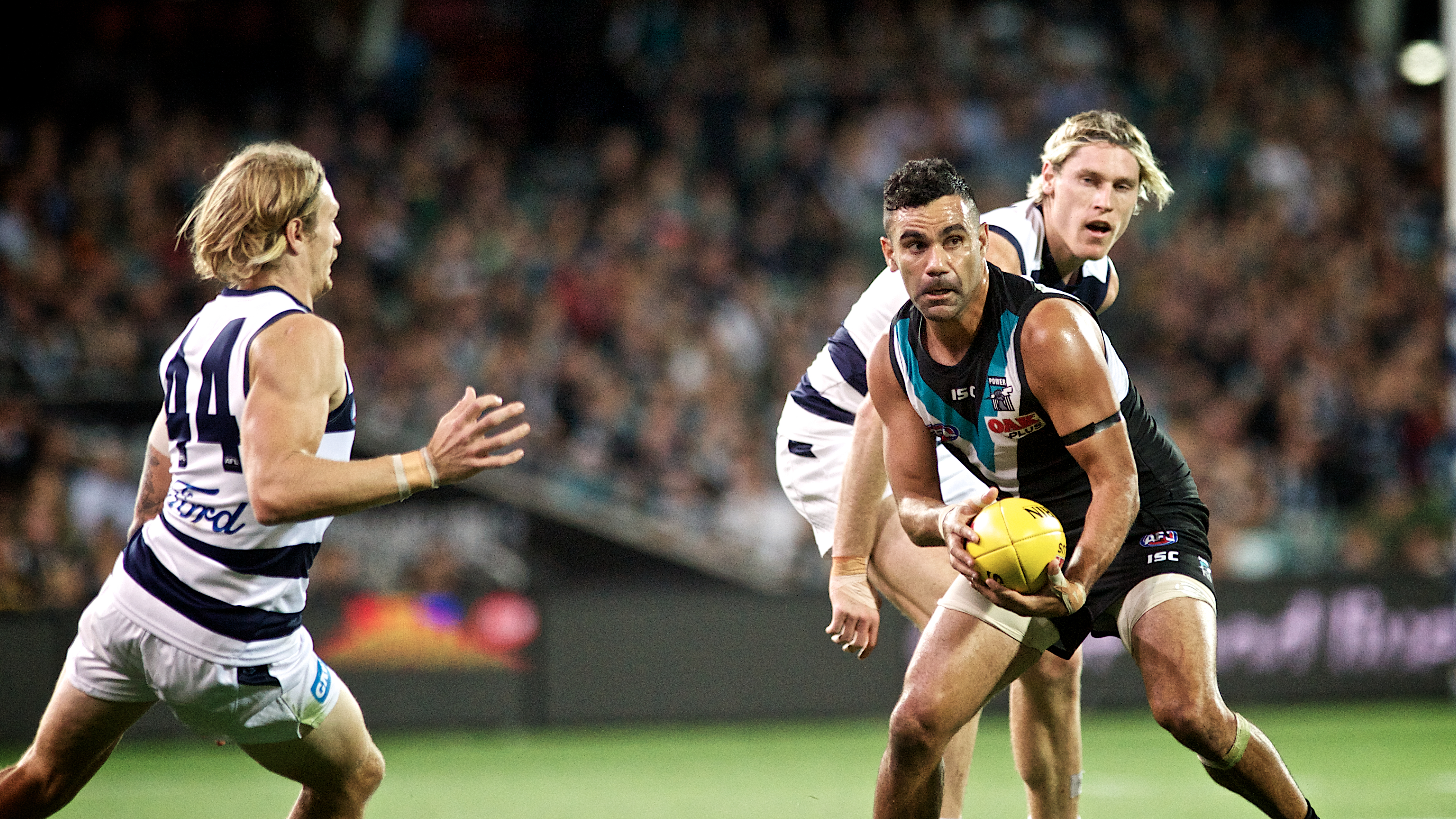 Needless to say, by the halfway point of the weekend, the mood of the average Crows supporter could be best summed up thus:

But it’s always possible that Adelaide’s backs-to-the-wall victory was merely a symptom of what’s been an undeniably odd round of football (of which there’s still two games yet to be played), in which case we’ll predictably drop our collective bundle again this week against the Suns.

And even if we don’t, let’s not get (too) carried away. 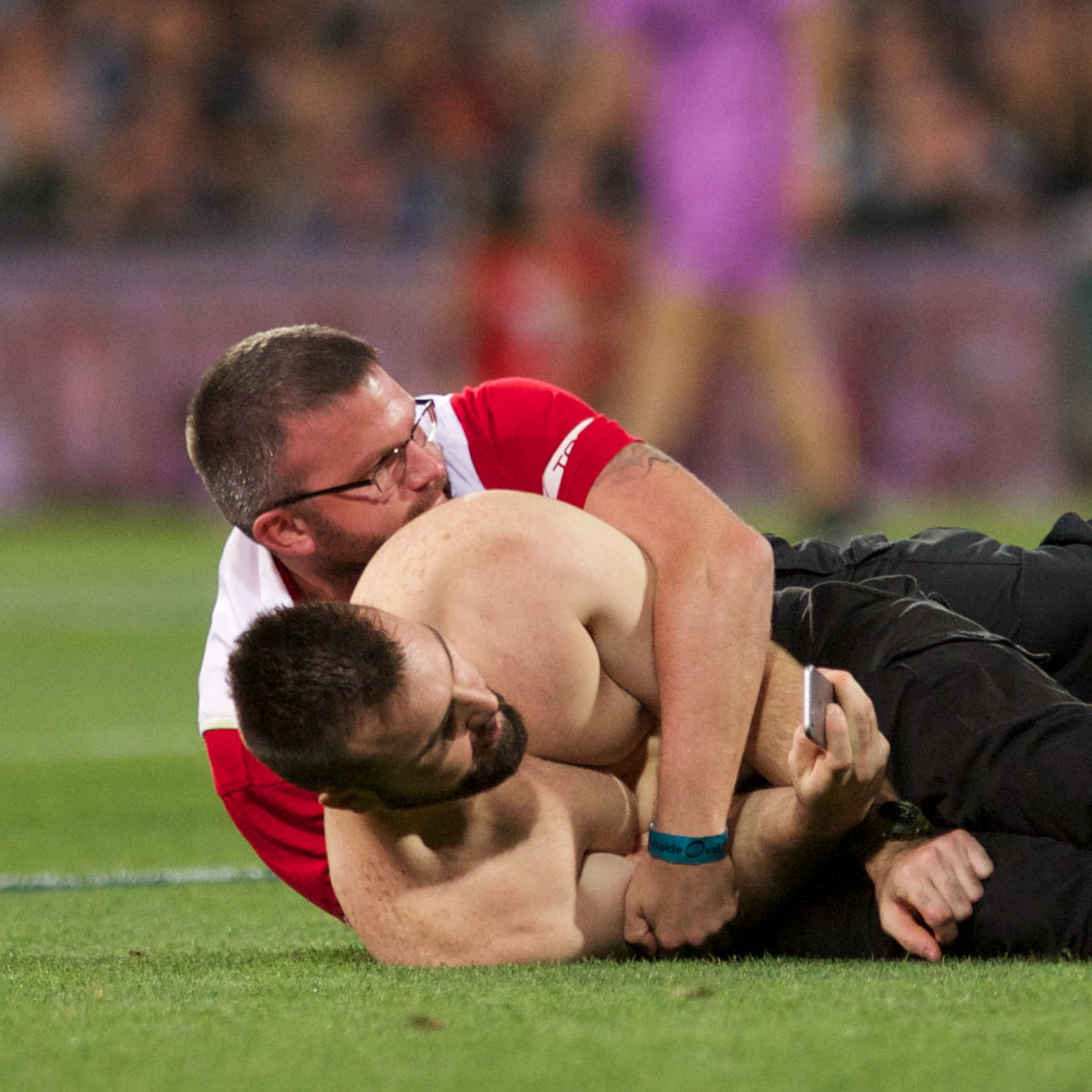 It is, after all, only a week since that shiteful home outing against the ‘Pies – forgettable, but best not forgotten.

And as when we famously rolled the Blues in ‘01, most of our great home and away wins – that 2013 comeback against North springs to mind, as do the Showdowns of 2000, 2008 and 2015 – can’t be recalled now without the realisation that they were mere stepping stones en route to eventual, inevitable disappointment. We beat Carlton once more that season, at home, before facing them on the MCG in an elimination final, in which our season ended with the kind of lop-sided scoreline we were probably expecting on that drizzly day in April.

I was at the last game, but all I remember of it now is that Matthew Lappin kept kicking quite unhelpful goals, along with some guy called Jimmy Plunkett whose prior claim to fame was being the kid in one of the old Max Walker Aerogard ads. Matty and Jimmy kicked more between them, indeed, than the Crows managed all day.

That was on September 8, 2001; in the days that followed Darren Jarman confirmed his retirement. I remember watching a montage of his Grand Final exploits over the closing credits of Talking Footy’s ill-fated Tuesday night experiment, minutes before the late news heralded the end of another era entirely, as the Twin Towers collapsed before our eyes.

Like watching the footy on Anzac Day, then – it’s all about perspective.

But these are the moments that stay with you, I suppose. You start by reflecting on one of our better wins, and before long you’re drowning in the memories of another time, another place, another era.

Perhaps that’s what makes these moments part of the Crows canon, the ones where – 17 years on – you can still recall where you were and what you were doing when it happened (or if not, ‘on the couch watching the footy’ is generally a pretty safe guess). And, for better or worse, what it meant.

I’m fairly confident we’ll be doing that about Friday night’s game in years to come.