For some reason, I still remember the banner the Melbourne cheer squad unfurled at Football Park before Adelaide’s match against the Demons in Round 2, 2001.

This fact alone is quite disturbing, given I can’t remember far more important events that happened only last week and routinely forget useful things such as my bankcard PIN, birthdays of close family members and where I left my car keys.

But for reasons best explored at great personal expense in the company of a qualified psychologist, I can still tell you, more than 16 years after the event, that the words that greeted Crows supporters as the Demons took the field on that April evening were: “Adelaide: you are the weakest link. Goodbye.”

For any millennials who might be reading this, the message was an unfunny homage to the catchphrase from a TV quiz show that was briefly sort-of-popular at the time.

On the night, however, it proved remarkably prescient. The fact that I’ve already mentioned this particular game once or twice this year (if anyone’s forgotten, the specific emotional scar came in the form of Andrew Leoncelli and his goal to put Melbourne into the lead with four seconds on the clock) might suggest the evening has haunted me a bit over the years.

Anyway, it may have taken 16 years, but, as of the end of the home and away season of 2017, I think I’ve finally come up with a reasonable retort: “No, Melbourne, actually it is you who are the weakest link. Goodbye.”

Take that, Melbourne Cheer Squad circa 2001!

For surely that is what the Dees became with their weekend Dee-saster. Or, if you’d prefer a more contemporary reality show analogy, they are undoubtedly the AFL’s Biggest Loser.

All season, they’ve been talked up as finals-bound, even a premiership smoky. West Coast, on the other hand, has been broadly dismissed as something of a joke – a mid-table downhill skier with neither the drive nor the personnel to challenge for September.

And yet, here we were, with minutes left in the minor round, and all that separated the two clubs were a few measly fractions of a per cent on the AFL ladder.

And, as always, Melbourne came away on the wrong side of the ledger.

Thanks, in no small part, to us. 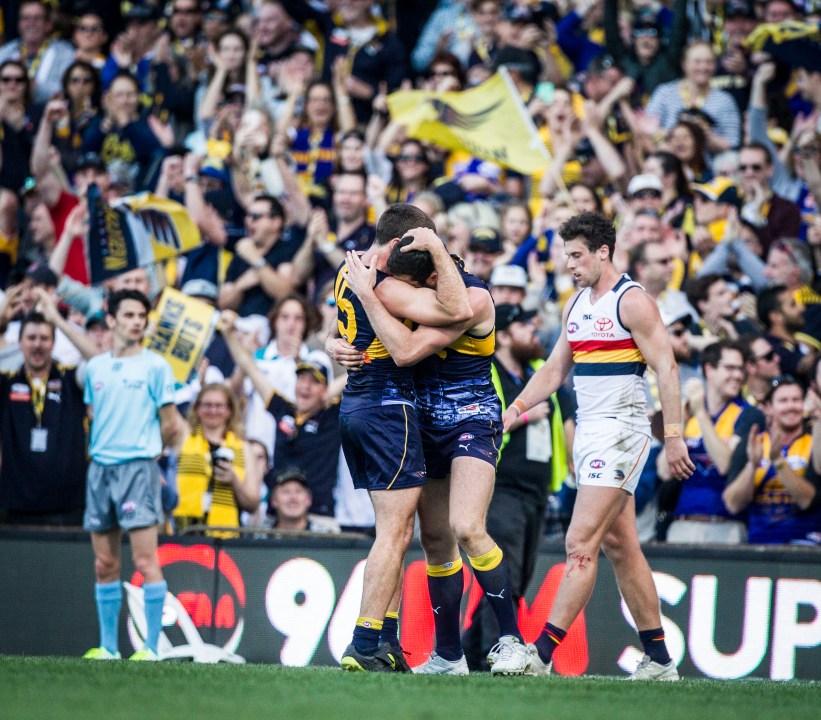 It’s hard, though, to garner too much enjoyment from all the forlorn Melbourne supporters now crying into their Basket Press and getting their butlers to burn their membership cards.

How can you feel schadenfreude for a fanbase for whom the final round turned so quickly from unbridled joy to abject despair?

This is a club, after all, which hasn’t played finals since 2006. They first announced themselves as perennial millennial underachievers with a staggeringly poor start to 2007, in which they didn’t win a game until Round 10.

(As a fun aside, see if you can guess which team it was that lost to them!)

Nonetheless, the fact they’re evidently keen to pilfer one of our emerging key defenders has tempered my sympathy rather significantly.

I’ve said in these pages before that I’m a fan of Jake Lever – I’m a BeLever, if you will – but if he must piss off to the Demons, at least we can console ourselves that it was he who turned the ball over for Lewis Jetta to kick the goal that sent West Coast into the finals.

Still, it was an apt end to a plain old weird year of football.

Geelong wore GWS down with grim determination on Saturday night, evidently very keen for us to lock away the minor premiership as early as possible. 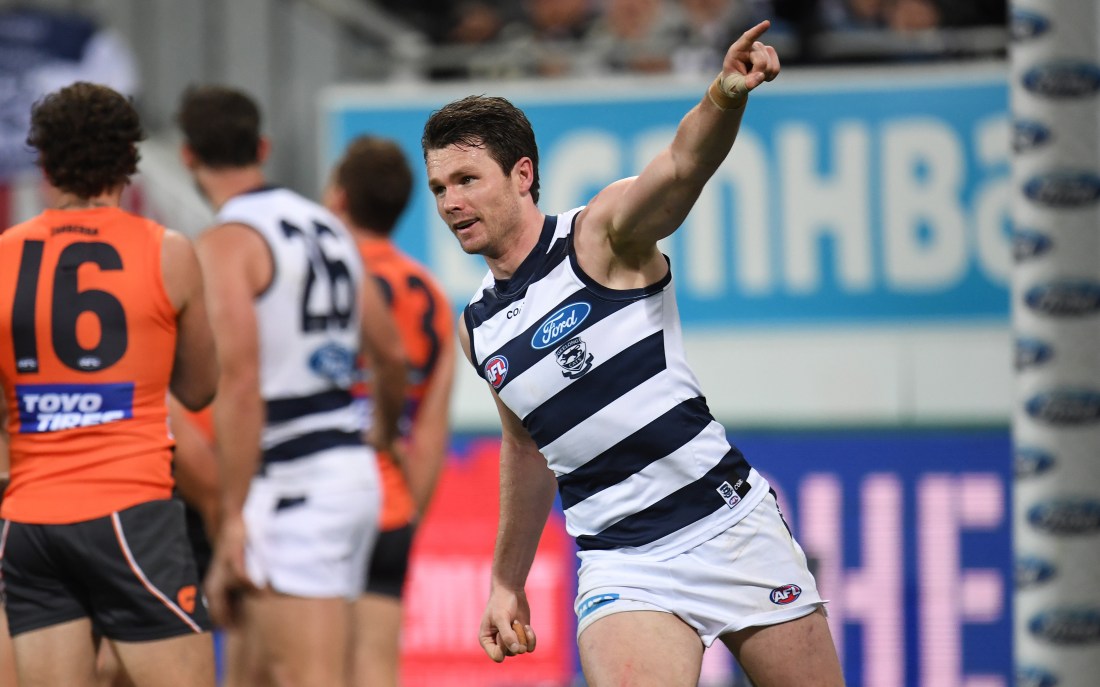 Which actually left me with a keener interest in Sunday’s Richmond/St Kilda match than my own team’s later fixture, of which the biggest fear was that someone copped a season-cruelling injury.

It’s an odd feeling, being a temporary Tigers supporter; one becomes inherently paranoid, nervous and pessimistic, wary that any semblance of joy or celebration will be quickly extinguished by a capricious turn of fate.

So, of course, being a Crows supporter prepared me for the role immaculately.

(By contrast, in the earlier game Essendon phoned in an incredible Richmondy performance, and in the end it took all the incompetence Fremantle could muster to somehow avoid beating them.)

It meant the Tigers snared third spot on the ladder and as such get the associated reward of a double chance and home final in the first week.

There was some suggestion the home final should really go to the team who finished second, but the AFL decided it was much fairer to let Richmond get it. Which obviously makes sense.

The Tigers are in ominous touch, and are as likely as anyone to go all the way. Mind you, there’s also every chance they’re just saving their Richmondness for the major round, and will bow out in straight sets, thus keeping their perfect finals record since 2001 intact.

In the meantime, their elevation into the upper rungs of the ladder means two things: first, that Port finished outside the top four and now go straight into a sudden-death final.

But, more importantly, we don’t have to play them.

At least, not yet.

But be warned: should they win as expected at home against West Coast, and should we manage to drop only our fourth home qualifying final ever (which we’ve managed to do in two of the three preceding ones, so we’re every chance), we’ll be hosting the Power in a knockout playoff.

Which is, frankly, my worst nightmare. 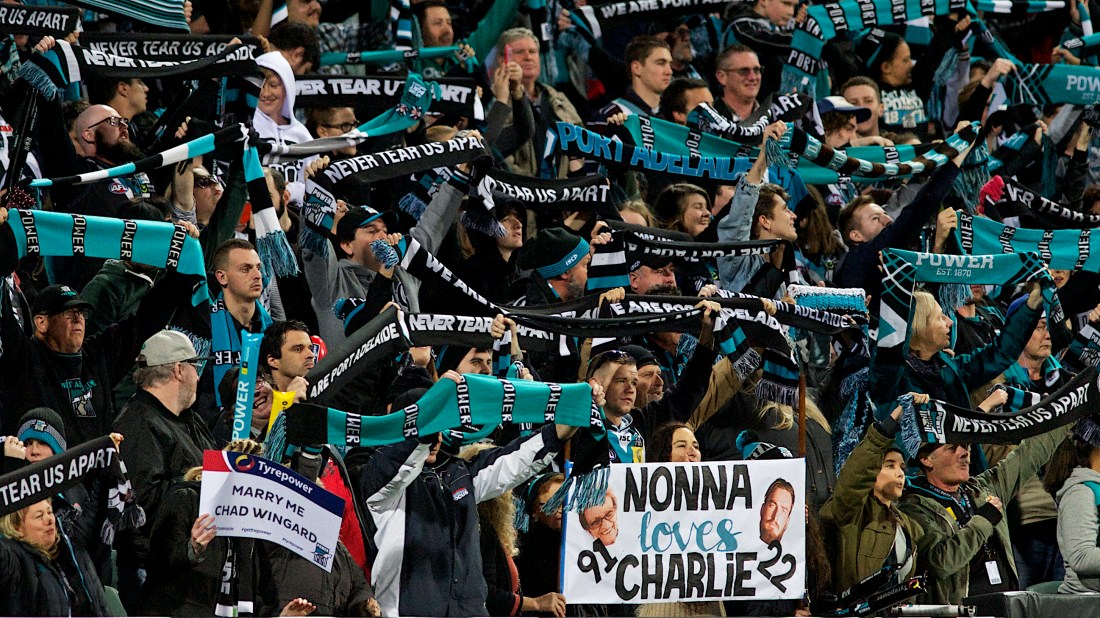 This is not a sight Fumbles wishes to see at a Crows final next month. Photo: Michael Errey / InDaily

To be fair, the Witches’ Hats sort-of held their own during a fairly average first term, and their score of 2.1 seemed like quite a passable return at quarter time. Unfortunately, it looked a lot less passable when they were still mired on exactly the same score by three quarter time.

Especially because during the intervening hour or so, Port had piled on 12 goals.

Which at least ensured we no longer had to worry about hosting Sydney in a Qualifying Final, with the Power relegating last year’s Grand Finalists to a sudden-death elimination final.

Still, you’d hope even if we do end up facing the Swans, we’ll kick straighter than we did last week, and the umpires might even see fit not to gift them a game-changing goal in the dying minutes of the game. To be fair, the umpires’ boss did come out in the week to concede this was an error, following a tense meeting at AFL House, exclusive vision of which has been obtained by the Fumbles and can be seen here:

But if the Power game had the enjoyable result of ensuring we no longer had to worry about facing Sydney in the first week of finals, it also the significantly less enjoyable result of raising the prospect of a Showdown against a Port Adelaide outfit that appears a million miles from the side we trounced at Adelaide Oval less than a month ago.

There was no mistaking the Power’s intent on Saturday. It was Peak Port Adelaide 2017: looking every bit the premiership contender. Against a bottom four side. At home.

Still, I’d been rather hoping the Suns would manage to turn back the clock for just this one game and evoke the time they broke through for their first ever win against the Power in Adelaide. And indeed, it was a bit like that game, with Charlie Dixon dominating up forward. 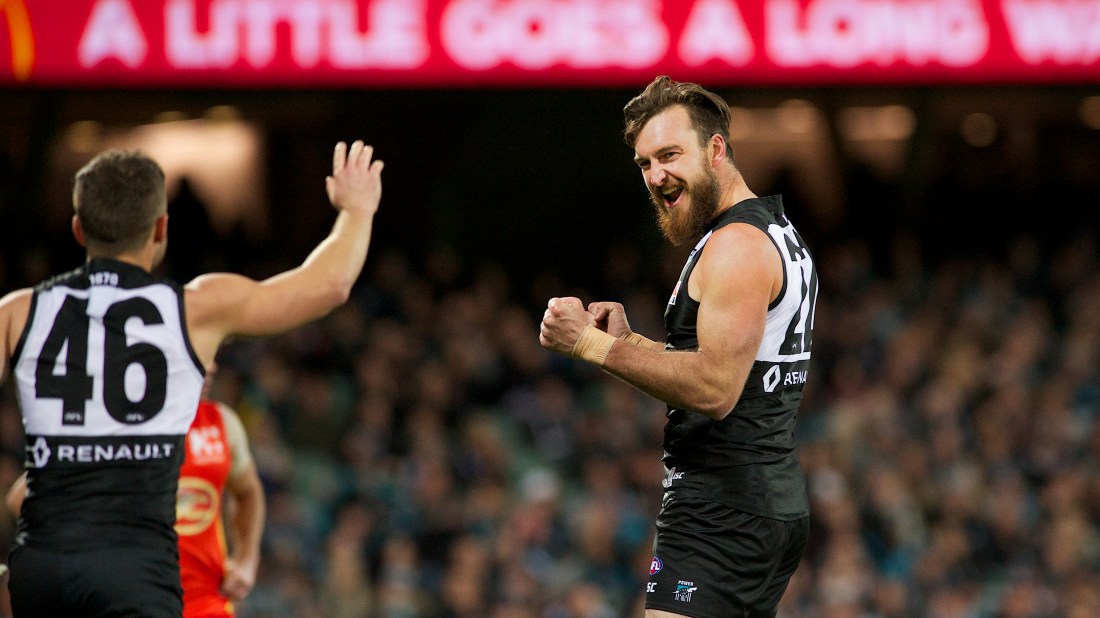 If you hurt Charlie Dixon, he will make wine from your tears. And then drink it before his next game. Photo: Michael Errey / InDaily

But unfortunately for the Suns, he plays for Port Adelaide these days, so that didn’t really do them any good.

And that’s about as far as the similarities went with that 2011 game, except for the fact that Matthew Primus left both games disappointed. 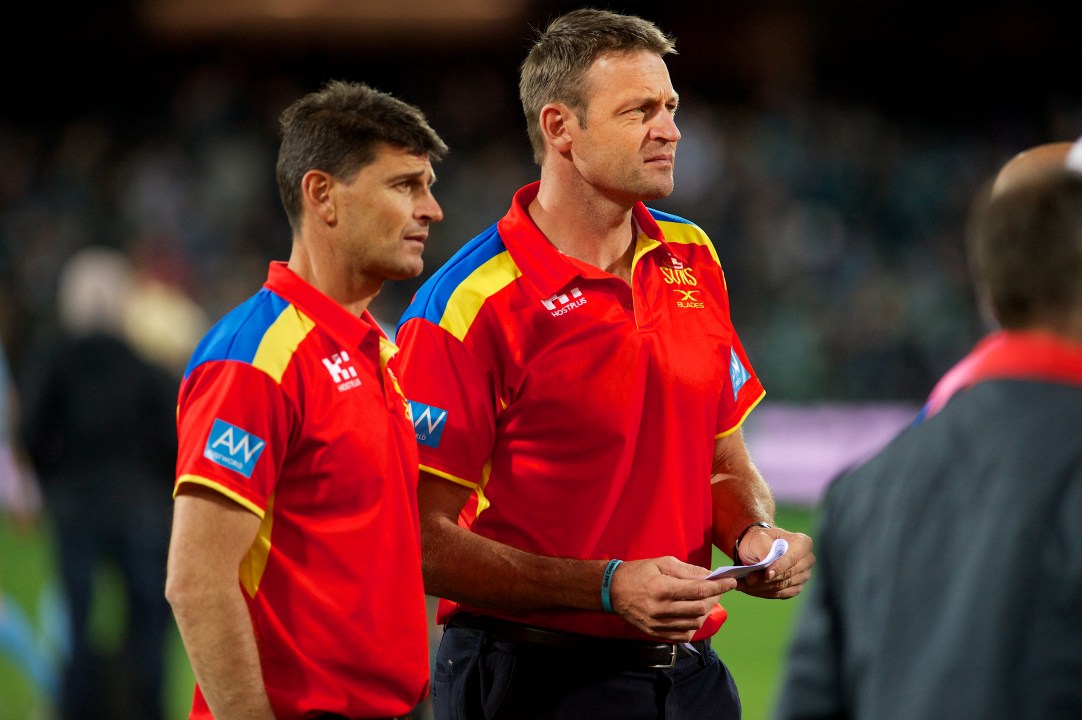 It has taken years of practice for Matty Primus to perfect his wistful gaze. Photo: Michael Errey / InDaily

So the Suns join the 2017 also-rans, for whom the post-season postmortem has already begun. Collingwood responded to its fourth consecutive non-finals appearance in brutal fashion, by offering Nathan Buckley a two-year contract extension. That should show ‘im!

It was strangely apt, though, given the AFL began the weekend by discounting the cost of the pies at the footy, that the week should begin with the ‘Pies stocks being further devalued.

As for the Crows, we have now secured only our second ever minor premiership, and I think we should all take a moment to mark that occasion and celebrate what it means.

It means not a jot, other than that it puts us in pole position at the starting line of the finals race.

Ominously, both Alastair Clarkson and Paul Roos teed off this week about the bye round before the finals, arguing it disadvantages teams in the top four.

Personally, however, I’m all in favour of it. Obviously neither Clarkson nor Roos can boast the Fumbles’ intricate understanding of All Things Football, and moreover they probably don’t have any kids whose birthdays fall in the first week of September, and have never had to try and coordinate a birthday party weeks in advance without knowing the fixture for the first week of the finals. Nightmare.

So in reality, the bye round works a treat. Sure, it may mean that there are more upset results and there is less upside to finishing with a double chance. But much more importantly, there is far less chance of the family Fumbles inadvertently being inundated with a bunch of five-year-olds during a crucial play-off.

Besides which, the theory that because the Bulldogs won it last year the whole top four system is broken at the very least warrants some further analysis.

Last year, after all, was an aberration in every sense. The Bulldogs finished seventh with 15 wins – as many as Adelaide managed this year to snare the minor premiership.

If you recall, we were similarly on track to finish with a double chance, but finished up with a surprise loss to West Coast, who beat us 100-71. Bizarrely enough, it was exactly the same scoreline as yesterday. Just with less furniture being destroyed at the Fumbles household. 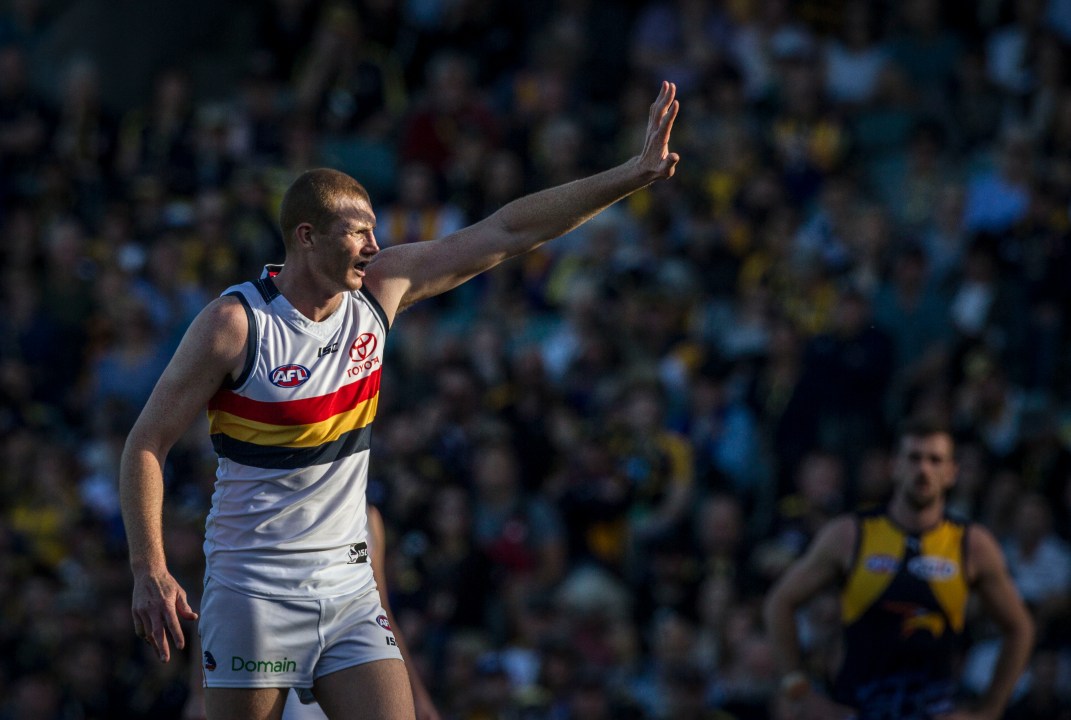 Sam Jacobs: big, but no match for the sun. Photo: Tony McDonough / AAP

And now the Crows find themselves back to square one: facing the Giants at home.

It’s a scenario that has already yielded the club victory in its inaugural Women’s League game this year, and its Round One win in the AFL season, as it sped off to a 6-0 start. So maybe good things come in threes, such as beating the Giants at home at the start of campaigns.

Mind you, it’s possible bad things come in threes too, such as losing home qualifying finals before missing the Grand Final altogether.

Because for all this talk of our Adelaide Oval finals fortress, we’ve already lost there to visiting teams three times this year.

Fortunately, though, we won’t have to worry about facing two of them again in September.

Sorry about that, Melbourne. Goodbye.

Touch of the Fumbles is InDaily’s weekly AFL column, published each Monday during the AFL season. Yes, it’s shamelessly biased. And yes, it is returning in the bye round next week, because its author is a glutton for punishment.