It’s the pinnacle of western culture, the dizzying zenith of dedication, mateship and tribalism: the footy weekend.

Or alternatively, it could just be a bunch of blokes travelling interstate to hit the piss for a couple of days while intermittently watching football.

For some, it’s an annual rite of passage, for others a weekly sojourn.

But this is how Fumbles and friends spent the weekend of Round 21, a merry band of some 15 revellers descending on the fair city of Melbourne for the Crows’ moderately-anticipated match-up with the Bombers. 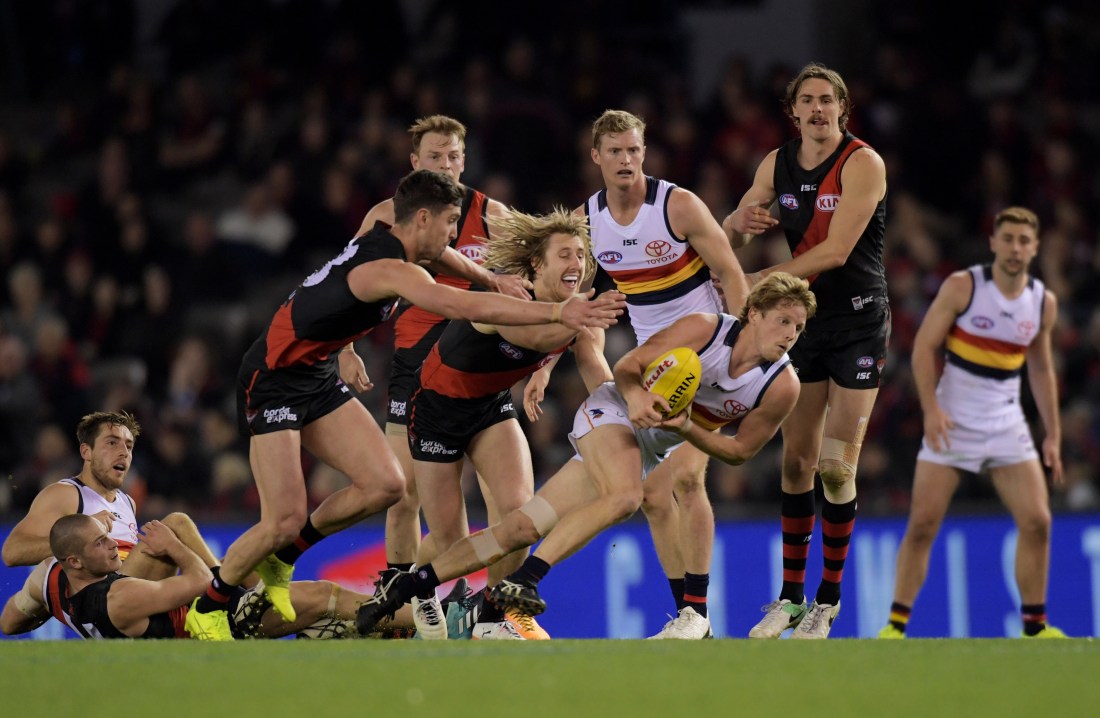 Our laissez faire approach to preparations (“Let’s just rock up on the night and see what happens”) had been challenged midweek when long-suffering Essendon champion Jobe Watson announced he was retiring from the AFL to follow his dream of making coffee, prompting a sudden rush on tickets.

So seats secured, we prepare to liaise in Melbourne; I stay with my parents, with others scattered around various city hotels. Sleep is, however, a secondary consideration.

But there are ill omens on departure. The Uber driver who drops my mate at Adelaide Airport notes his Crows colours and tells him he will be eating a breakfast of eggs, bacon and regret, before we individually arrive in the midst of a protest by taxi drivers against the ride-sharing insurrection.

It’s an odd gambit, trying to win the hearts and minds of travellers by mildly inconveniencing them.

There is, of course, something inherently galvanizing about hitting the road with your mates to cheer on your side. Even the Crows themselves are planning a post-season trip for supporters to rub shoulders with a few players on a trek to Everest, which invites the ambitious symbolism that they hope by then to have conquered football’s highest peak. But the reality is, at this point we’re all still trudging towards base camp.

Fortunately, the combined fanbase for both the Bulldogs and GWS could be comfortably accommodated in a large SUV, which means there are plenty of seats to choose from under the closed roof of Etihad Stadium.

Three of the last five games between these sides were decided by a goal or less, so we are anticipating a close-run tussle, and sure enough it is – for the first half.

After which the Giants start playing like the side everyone expected would win the flag this year, and duly steamroll the team that won the flag last year.

Sadly for the Doggies, with a tricky fortnight ahead, this was a game they really needed to win to assure themselves of finals action. Instead, they gave themselves a nightmare Orwellian vision of their future, “a boot stamping on a human face forever”.

And this wasn’t just some abstract boot-in-face analogy, although that would work pretty well too. Rather, the boot in question belonged to GWS pest Toby Greene, and the face was that of Bulldog midfielder Luke Dahlhaus.

GWS are looking ominous at an ominous time.

The club is reportedly looking to take a leaf out of Port’s book by playing a home game in India – in keeping with their philosophy of seeking out overpopulated markets that generally couldn’t care less about AFL – but the players are evidently focused on the task at hand.

As a player and a coach, Leon Cameron has had even more preliminary final heartbreaks than Adelaide have endured since their last premiership. Indeed, two of them came at the hands of the Crows, with the onetime Bulldog defender having a ringside seat for the goalkicking sprees put on by Jarman in ’97 and McLeod in ’98.

His Giants have now more or less accounted for his former side in 2017, but the Dogs have been an odd proposition for a reigning premier.

Coming off their October triumph, the season feels a massive let down. But on the other hand, theirs was a flag won on the back of the most unexpectedly exuberant September campaign since, yes, the Crows in ’97.

Indeed, for all the hype, they finished the minor round in seventh place last year, and are still an even chance to do much the same this time round.

So is it a premiership hangover? Who knows.

But even if it is, you don’t get the hangover without some hard celebrations.

So if a hangover is your biggest problem, it’s a nice problem to have.

Speaking of which, by game’s end our footy tour is less Orwell than Kafka, as we throw ourselves with naïve gusto into the Melbourne night, hoping we can somehow enjoy ourselves whilst also not getting shot by any overeager local police officers.

Things start badly though when, two steps into one of the city’s less reputable establishments, I realise I have left my phone in the cab we have just farewelled. A few frantic calls from my mate’s phone and a frenzied negotiation later, the driver helpfully brings it back. If you ever want to boost your self-esteem, I probably wouldn’t suggest standing in front of a seedy nightclub and hailing down passing cabs to ask if they’re the guy who’s got your phone. Nonetheless: Taxis 1, Uber 1.

The next morning, I wake with pounding head to a phone call from my Dad, out shopping for lunch, asking me what kind of beer I’m drinking.

It’s the last question I feel like answering but, as Macbeth would have said, I am in beer stepped in so far that, should I drink no more, returning would be as tedious as going on.

By mid-afternoon, our group has reconvened at a Docklands pub to keep half an eye on Richmond’s game against an undermanned Geelong, which Richmond helpfully loses, ensuring a win over Essendon will be enough to guarantee the Crows a top-two spot.

However, playing out on an adjacent TV screen is Sydney’s triple-figure thrashing of the limp Dockers.

The Swans’ recovery from their 0-6 start is so impressive I’d almost have some grudging admiration for them, if it weren’t for the fact that Kurt Tippett has found his way back from NEAFL purgatory and will probably now play out the year in the seniors.

But there’s no doubt Sydney’s formline is the best in the league at the moment. The only team they’ve lost to (twice) in the last 14 weeks is Hawthorn – who they’re unlikely to have to face in the major round anyway.

Our group stumbles on to Etihad, which is much as we left it 21 hours earlier. 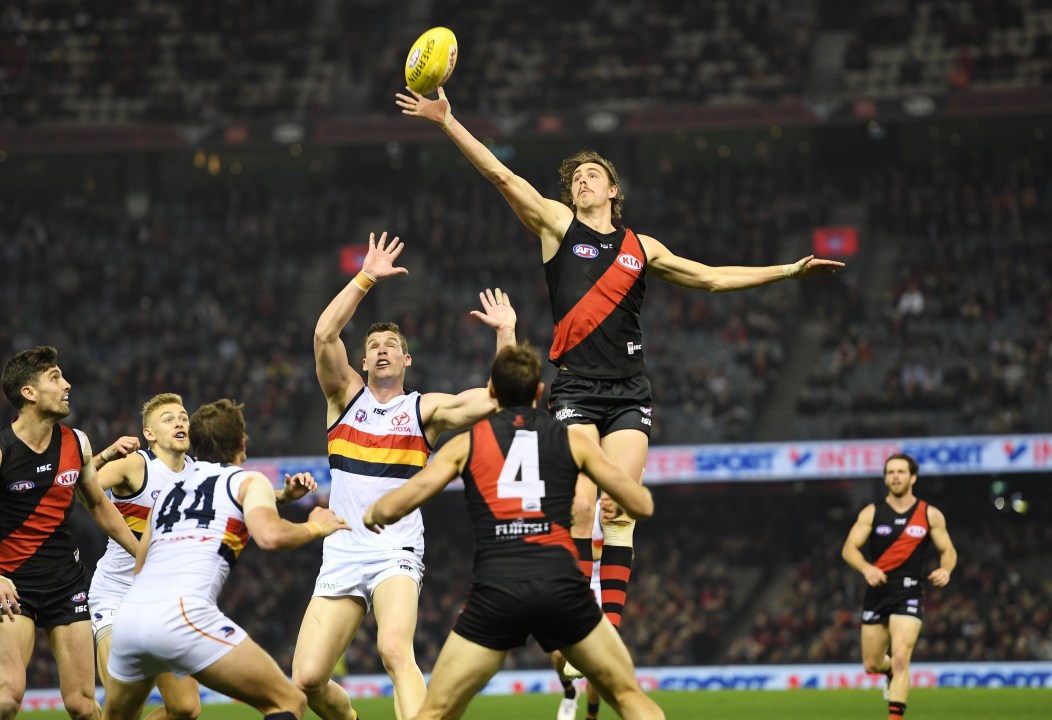 At some point during the third term, I attempt to balance a drink in one hand while responding to a text message with the other, and instead manage to send my recently-rescued phone hurtling several feet into the crowd, where it smashes on the concrete floor before bouncing into the middle of a tray of beer, which seems an apt symbol for the weekend.

Hopefully, though, the saga of my iPhone doesn’t come to be an analogy for our season: just when we think it’s saved, it ends up smashed in pieces on the ground.

But this time, at least, the Crows game plays out to script. Essendon are plucky, but to a fault. Joe Daniher kicks his third goal midway through the second term to put the home side in front, before tousling the hair of his old mate Rory Atkins.

Daniher gave the Bombers the lead and got the opposition involved in his celebrations. #AFLDonsCrows pic.twitter.com/8f9OzzfgLx

Hair-tousling must be a big thing at Essendon; Cale Hooker raised eyebrows when he did it to North Melbourne third-gamer Daniel Nielson a few weeks back, but at least he waited until the Bombers had a handy lead late in the final term.

It’s a less helpful tactic less than halfway through the game when you’re hanging onto a slim, tenuous lead. Particularly when your opponent then goes on to kick the next seven goals of the game.

I could understand someone wanting to rearrange Atkins’ hair if he still had that bleached mop he was sporting during the Crows’ midseason malaise, but in the context of Saturday it was a bit pointless. And since Daniher himself didn’t manage another goal while Atkins was among Adelaide’s best-performed players, it was very much a case of hair one minute, gone the next. 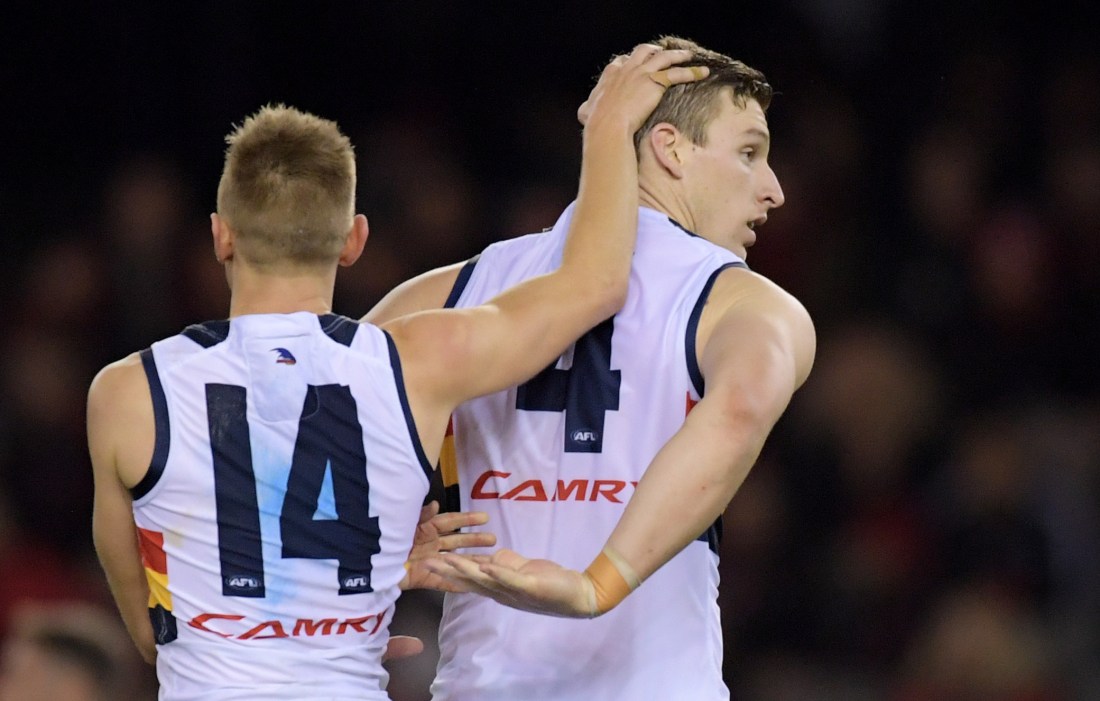 Hooker himself still managed to annoy the visitors, albeit without offering any tips on personal grooming, by briefly threatening to make a game of it.

But in the end, this was what it was meant to be: Adelaide doing enough to win, and securing a top two berth with its all-important two home finals and double chance.

There should be no complacency about the Sydney game on Friday night.

For if the Swans get up on Friday, they are every chance to sneak into the top four.

Which would mean the Sydney juggernaut rolls on into the finals – with another likely trip to Adelaide to play the Crows in the first week.

Which is a prospect about as enticing as root canal surgery.

We have a very bad record playing Sydney in home qualifying finals, having lost 100 per cent of them. Of course, it has only happened once, which is not a particularly big sample size on which to base a grand narrative.

Anyway, having foolishly booked an early returning flight on Sunday I sink into my plane seat to savour the lingering taste of stale beer and victory as I jet into a burst of spring sunshine in midwinter. It has been a successful trip: I am coming home with heartburn, but no heartache.

Even Port Adelaide’s middling win against the middling Magpies can be seen through a happy prism. On balance, I’d prefer Port to win their remaining games and beat the Swans to fourth spot, despite my longstanding fear of playing the Power in a final. 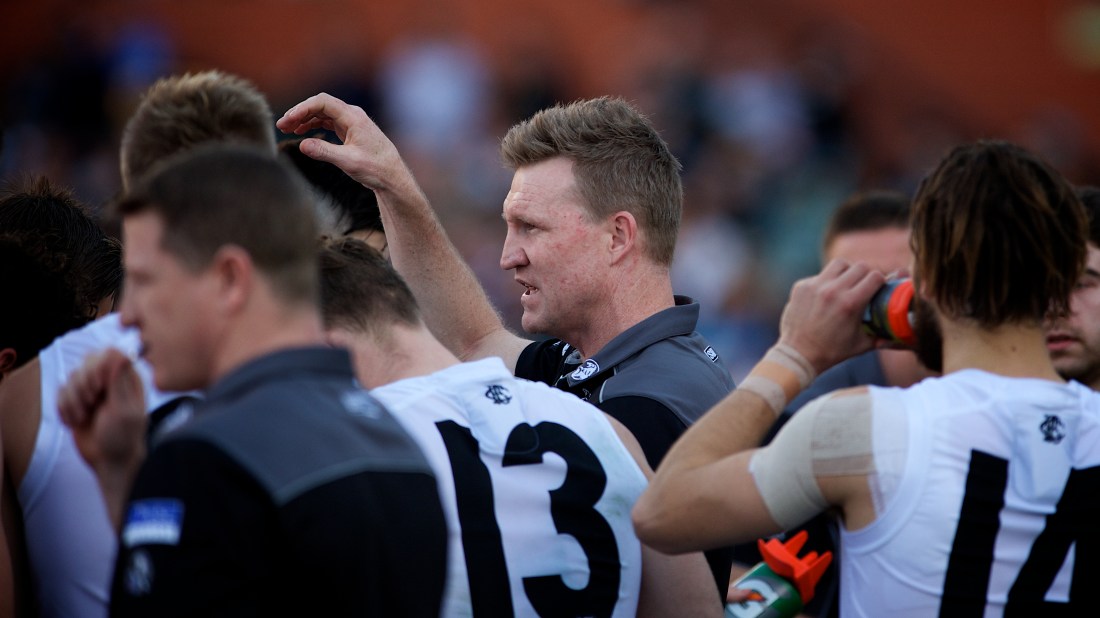 Worried that his players had stopped listening to him, Nathan Buckley instead used his imaginary assistant coach, ‘Handy’, to give his three-quarter-time address. Photo: Michael Errey / InDaily

Having spent the weekend with a bunch of old mates on the cusp of completing their fourth decade, we collectively revert to explaining the world through the prism of early-80s action films.

And as one of our group pointed out thus, the Crows are now close enough to ponder the prospect of seizing the Premiership prize:

But, particularly in the shape of the steamrolling GWS and Sydney, there are still some formidable obstacles between us and our third flag.

And if we somehow managed to stuff it all up again before Grand Final day, I’m not entirely sure how I’ll react. But probably like this:

Which is, on reflection, a little how I’m feeling this morning. Thanks for having me, Melbourne. I’ll see you again late next month. I hope.