After a heavy Friday night at the Oval and the following afternoon somewhat distracted by the enjoyably underwhelming exploits of the Power at the ‘G, Saturday night was given over to making matrimonial amends via a quiet night watching a movie (of her choice) on the couch.

Thus, through no fault of my own, I was forced to sit through Concussion – the movie, not the injury, although the latter might have been preferable.

And nor was it the 2015 sports drama and Will Smith vehicle of the same name. Rather, it was a 2013 US indie film, which seemed to be largely comprised of successive scenes of lesbian prostitution, although that makes it sound significantly more interesting than it was.

The premise, best I could tell, was that a mother gets knocked in the noggin at a school sports event, and the corresponding injury becomes a turning point in her life as she re-evaluates her domestic drudgery.

Which is, of course, highly unlikely.

Except that I’d already seen it play out the night before (sans sex but with more violence) at the Adelaide Oval, as Rory Sloane shrugged off his own bout of concussion to star in what was (hopefully) a season-defining game for both him and his club. 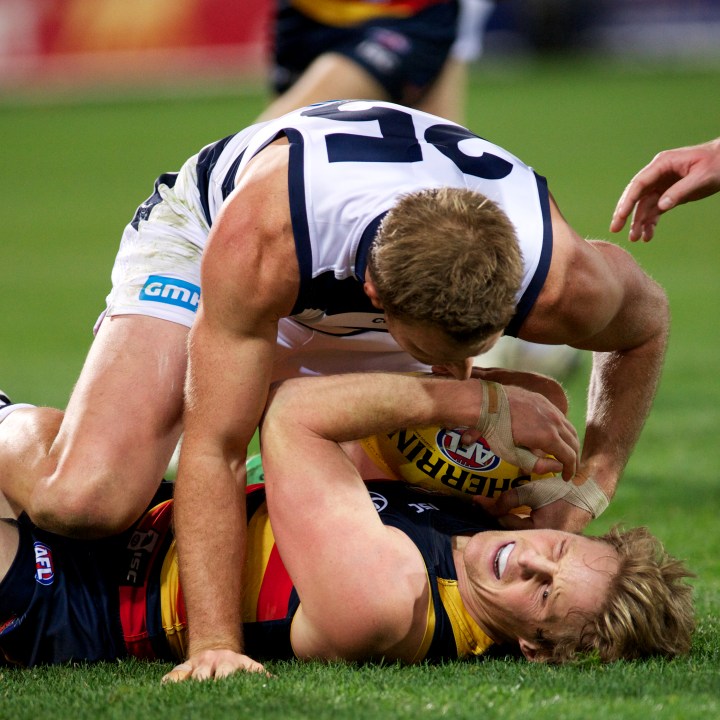 Not a scene from the film Concussion. Photo: Michael Errey / InDaily

Sloane’s season, while hardly a write-off, was fast becoming a curio, a talking-point and, indeed, a microcosm of Adelaide’s own midseason shift from indestructible footballing behemoth to vulnerable finals contender.

The previous week, against Melbourne, was probably the most forgettable (in more ways than one) of a series of difficult games for the Crows’ Number 9, knocked cold during the third quarter with a measly eight touches to his name.

He wasn’t expected to play the Cats, let alone play well. But he not only tallied more touches than he had for seven weeks, he also kicked three big goals – the first of them, his 100th career major, after a crunching tackle on Tom Stewart.

He also showed a bit of bluster: after Harry Taylor coathangered him in the second term Sloane engaged in a heated tussle with the Cats stalwart. Although it’s possible he just thought he was Bernie Vince.

But, in a rarity this season, Adelaide’s intent was evident from the first minute: the battered Sloane won the first possession of the game, while Josh Jenkins, having redecorated his bathroom during a midweek bout of gastro, managed the opening goal. 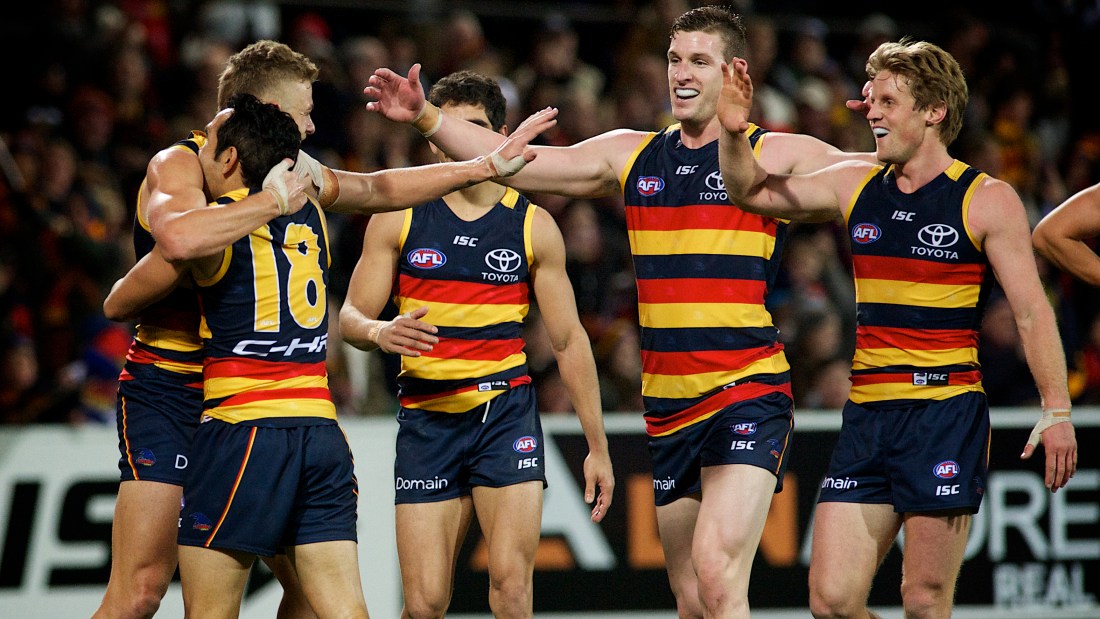 If it did feel like the umpires were conspiring against the home side, at least we had the Geelong coach in our corner. Determined to prove that lightning could strike twice after the Cats’ last-gasp win over the Hawks, Chris Scott obligingly left Paddy Dangerfield one-out in the goal-square for almost the entire first quarter. Admittedly he did kick a goal, but in the meantime the Crows took full advantage of his absence from the midfield – and the fact that Sloane was left to run unchecked from the outset – to pile on five for the term, by which time the Cats were resigned to digging themselves out of an ever-deepening hole. 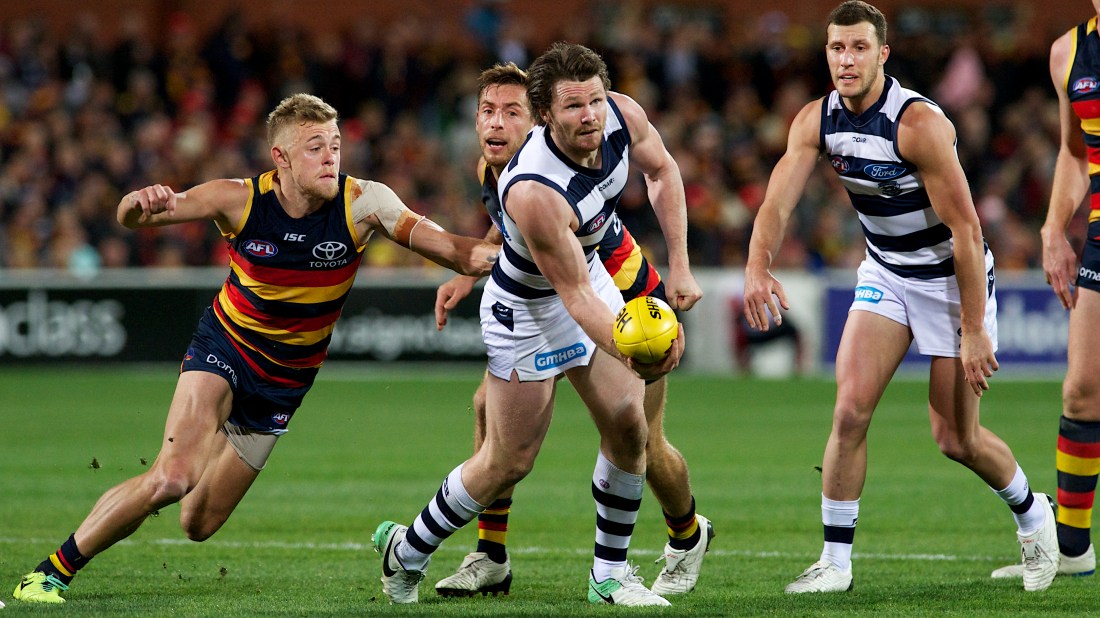 Dangerfield went to the middle after quarter time, in a move known as “Closing the Stable Door After the Horse has Bolted”. Photo: Michael Errey / InDaily

Even their usual tactic of only bothering to play for the final term failed to get them over the line.

Dangerfield, after a week being feted as the son of God reincarnate, turned out to be mortal after all, and was shown up by former teammates such as Richard Douglas, who kicked three of his own four goals before half time. If Dangerfield had done that, it would have been hailed as the greatest individual game in the history of the sport. 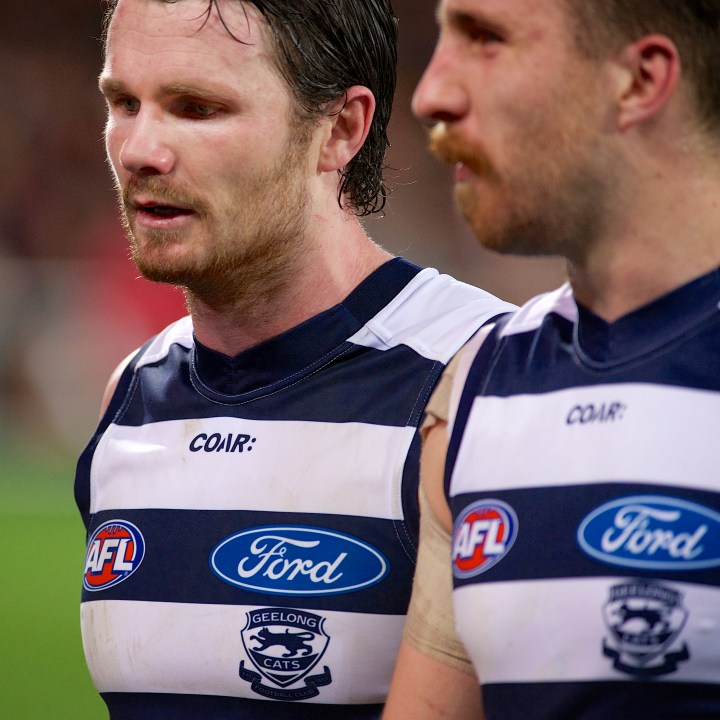 And although he turned out not to be the son of God (though don’t tell him, he doesn’t know yet), there was a brief moment in the final term when I turned to the hill and saw a strange red glow and billowing smoke emanating from the earth, and thought for a moment the gates of hell had opened and that Satan was about to stride out and say: “Patrick…I am your father!”

But it turned out to be just some muppet with a flare.

A flare has been lit on the hill. #AFLCatsCrows pic.twitter.com/EWuiXVjIis

But for every Crows fan except that guy, the weekend just kept getting better.

Port continue to befuddle with their inability to decide whether they’re a good team or not. I mean, I know they’re intrinsically not a good team but it was starting to appear that they might have been a bad team that also happens to play quite well, like the Globo Gym team in Dodgeball.

Still, the fact that their new EB arrangement evidently gives the players one week off out of every three will make it harder for Ken Hinkley to manufacture that top four berth he seems to want.

The likely absence of the injured Wingard stings, but the fact that they have a run home softer than Paddy Dangerfield playing for a free will be some consolation, with four of their next five games in Adelaide and a glut of likely non-finalists to contend with, the Showdown aside.

Still, they were truly awful up until time-on of the first half against Melbourne, having evidently forgotten the crucial nexus between kicking goals and winning games. By the time they showed any particular interest in the two big sticks, the Demons were already well over 40 points up, and the contest was more or less Max Gawn. Speaking of which, the Dees’ ruckman dominated proceedings in the first half to such a degree that Paddy Ryder lost his usual mantle as the best formerly-banned Bombers player on the ground, which instead went to Michael Hibberd. 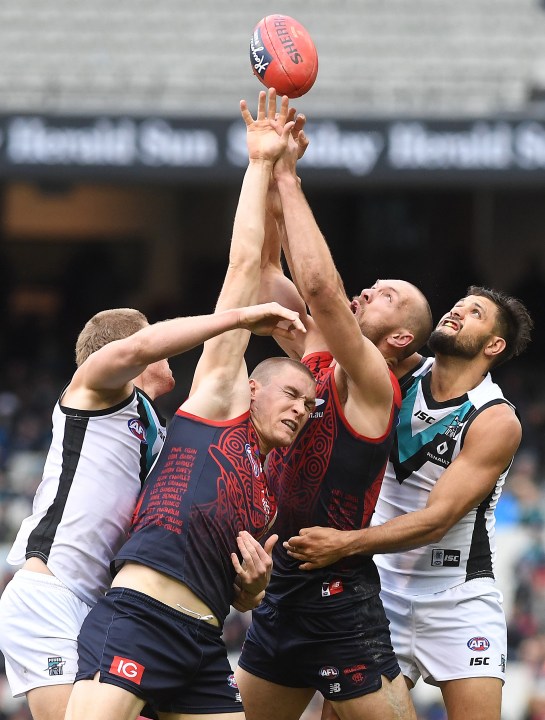 A few weeks back, apropos of not much, I devoted an inordinate amount of column space to dwelling on the inherent woes of being a Richmond supporter (which, of course, I’m not).

Perhaps I was having some kind of telepathic foresight about the important future cameo the Tigers would go on to play in our season, because yesterday they achieved the most splendid double-whammy: they managed to simultaneously put us two games and significant percentage clear of GWS while kicking Port out of the top four with five rounds to play.

On any given round of football, there are probably three games I approach with the most keen interest: the Crows fixture (with long-earned skepticism), the Port fixture (with trepidation and occasional schadenfreude) and some other random match-up whose outcome will somehow affect Adelaide’s future prospects.

And this week, that random game was played out yesterday on the MCG between Richmond and GWS.

It is a rare feat indeed that all three of these games end so happily, at least from my somewhat blinkered point of view.

The Crows finally got one over on Geelong, Port stumbled unexpectedly against an undermanned Melbourne and Richmond’s win managed to significantly re-sculpt the ladder – and significantly in our favour.

As an added bonus, they even likely managed to get the Giants’ resident Slow Learner Toby Greene slapped with yet another ban, with Alex Rance provoking him into one of his traditional gullet-punches – a signature move I call “Greene Around The Gills”. 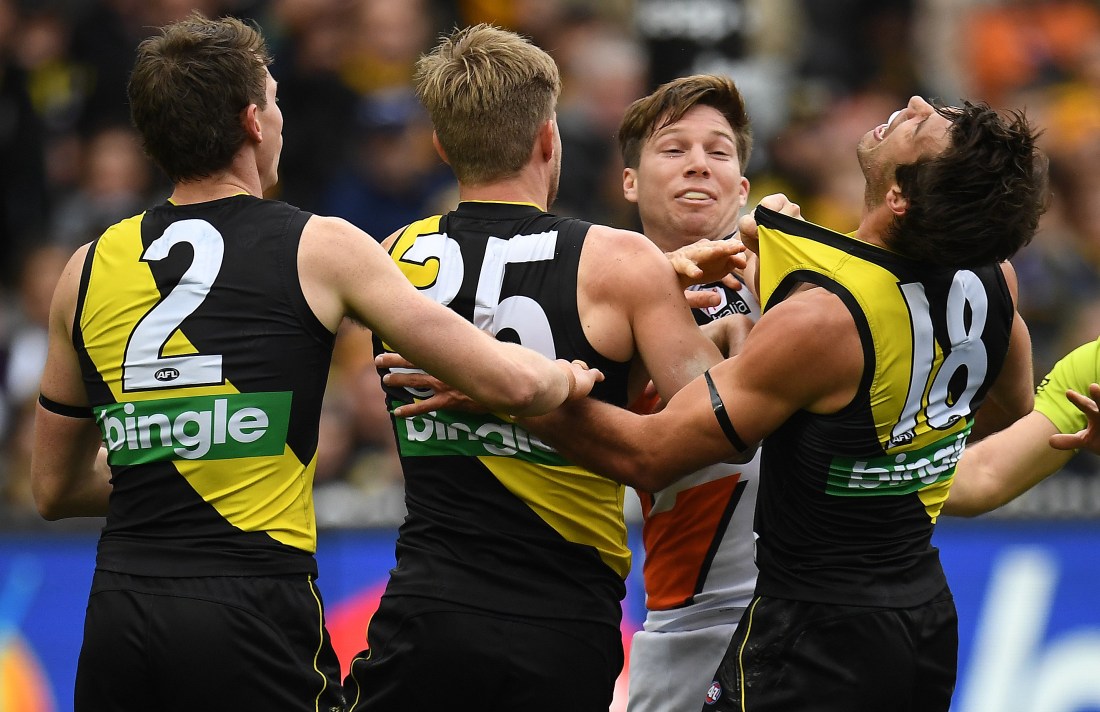 It’s that time of year when the fixture suddenly looms as something to be pored over, to spend inordinate hours pondering every possible permutation. And then coming to ridiculous conclusions such as that Adelaide would be better off losing their final home and away game against West Coast, as one particularly stupid football pundit presaged at around this point last year.

Oh wait, that was me…

But nonetheless, if one were objective (haha!), one might go so far as to say it would be extremely difficult to imagine the Crows losing a top two spot from here. For starters, we would probably need to lose three of our next five games to fall below the Giants (although there are certainly no gimmes amongst the next five games).

Add to that the fact that Geelong (now a game and a half behind us in second spot) and GWS (third) play one another in the final round, which means one of them must lose a game from here (unless they draw again, in which case this season is officially the stupidest in AFL history, which it possibly is already).

So today we’re all about the Tigers, who have temporarily banished at least two of my finals nightmares, involving first round losses to either Geelong or Port.

It’s hard not to have a soft spot for the oft-monumentally incompetent Richmond, especially given they’re the only team in the comp with a longer Grand Final drought than us.

Of course, it will be hilariously ironic if we end up playing them in week one and lose, won’t it? 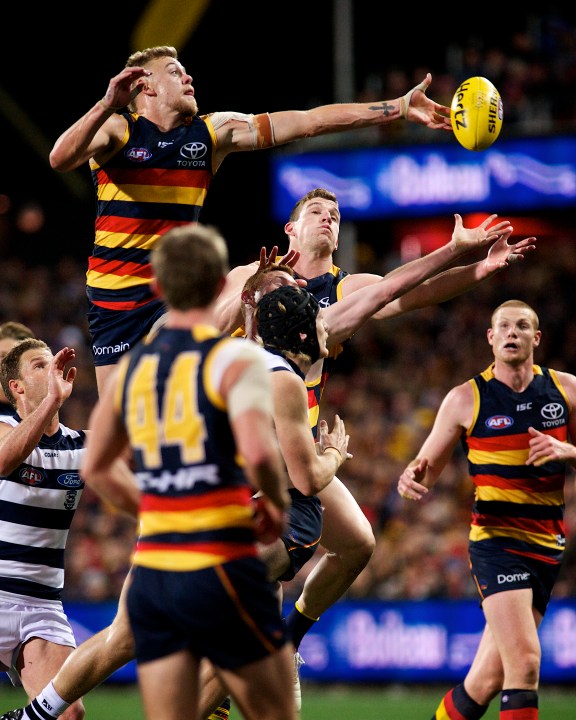 But that prospect aside, this weekend was such a confluence of Good Tidings it is hard to find the negative on which to hang our traditional Fumbles grumble.

There are minor laments: Brad Crouch’s cheekbone is depressed, and thus so am I.

And Eddie Betts has continued the recent spate of random hospitalisations, having surgery to remove his appendix overnight, which will see him miss Sunday’s Collingwood clash. Troy Menzel’s seven-possession fizzer against Norwood on the weekend wasn’t very well timed then, was it? 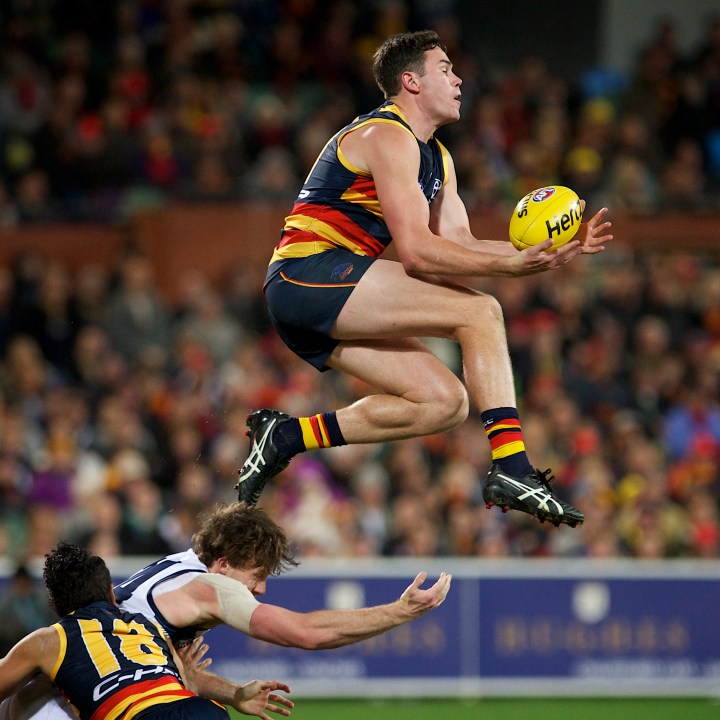 Mitch McGovern uses his head – and someone else’s – to bring down a hanger. Photo: Michael Errey / InDaily

But it would be foolish to declare all is doom and gloom when one’s team is sitting six points clear of their nearest rival at the top of the ladder with the major round well in sight.

Except for the obvious: that over two decades we have learned all too well that hope and despair are two sides of the same accursed coin – which always tends to land the same way.