A couple of weeks back I took my five-year-old kid along to one of those Auskick clinics attended by a handful of Adelaide players.

Like his old man at his age, his general interest in the whole football milieu is not exactly high, other than to claim support for Port Adelaide because it seems to elicit a presumably-satisfying amount of antipathy from his dad.

So this was, I suppose, my half-arsed effort to indoctrinate him into the Crows fold once and for all.

Things didn’t get off to the best start when we discovered which players would be supervising the chaos.

If you were searching for an uplifting euphemism, you’d say my son is “in the 25th percentile for height”.

Other kids in his reception year have found a more direct way of putting it: he’s ‘a bit little’.

His mum cleverly intervened to point out that his Dad’s favourite Crows player, Eddie Betts, was also a bit little. 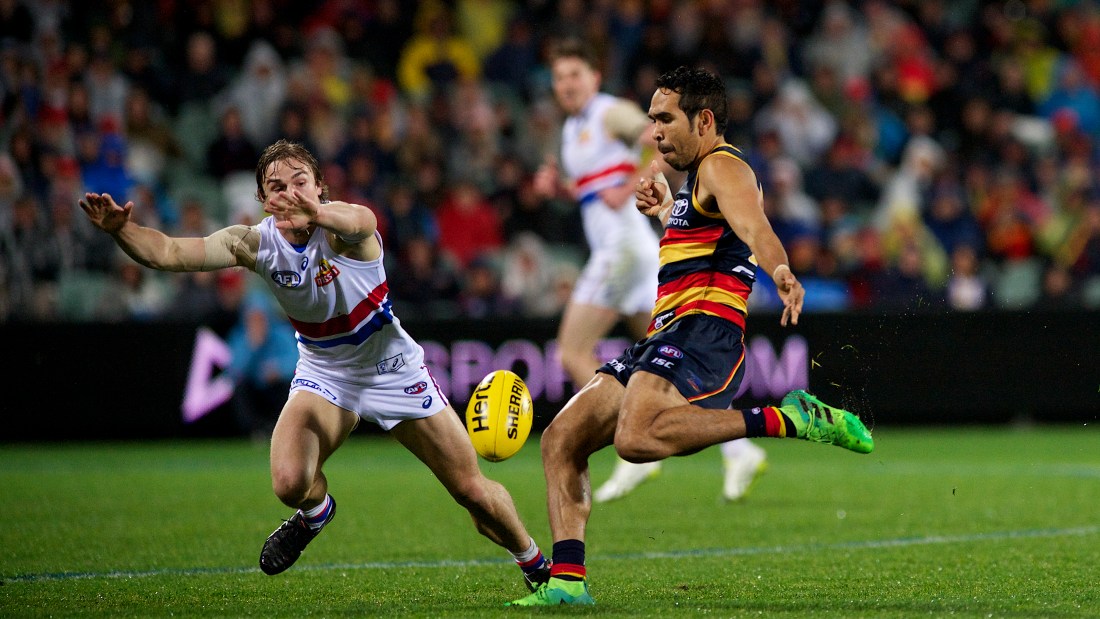 Thus, he was fairly adamant that whoever showed up to give him a few football pointers should be, if not Eddie Betts, at least on the short-statured side.

A Rory Laird perhaps, or even Ben Jarman if we were exceptionally lucky.

Instead, along lumbered ruckman Sam Jacobs. 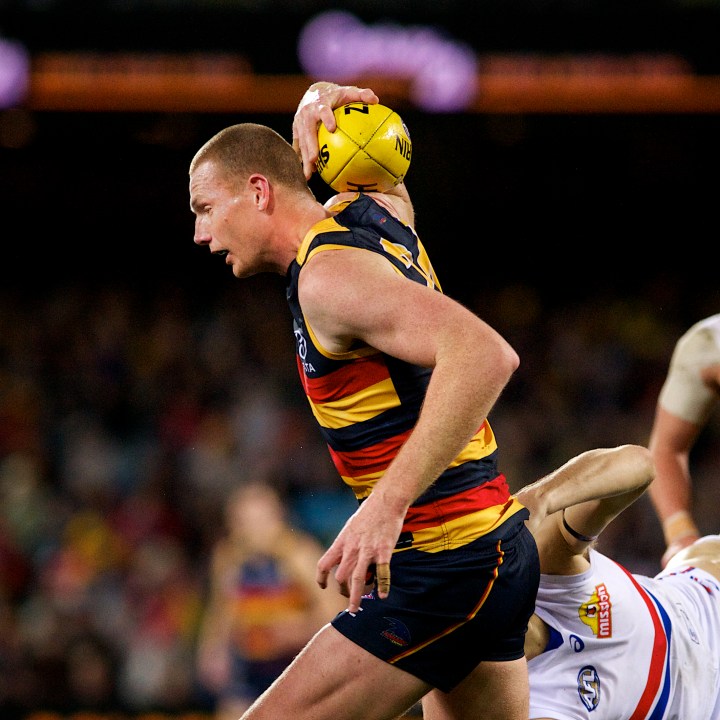 No matter. Sauce and his other ring-ins – the brothers Crouch, Jake Kelly and Elliott Himmelberg, whose confidence I no doubt bolstered by introducing him to my kid as “Harrison” – presided over various drills in which a bunch of five-year-olds somehow end up with the ball and then run around in circles for a while before kicking it the wrong way.

Which was, appropriately enough, the exact same gameplan the Crows players had employed in the previous week’s loss to Hawthorn.

At the end, the organisers happily announced that the players would be signing autographs, so I dutifully bustled my youngster over for the main event.

Unfortunately though, he was blithely unfamiliar with both the players and the concept of getting semi-famous people to write their names on things, and seemed genuinely put out when this bunch of strange men started scrawling all over his nice new football guernsey with permanent texta – while he was wearing it, no less.

It took several minutes of patient parental diplomacy to convince him that this was Actually A Good Thing. Followed by several further minutes of me silently fretting that I might have inadvertently set him on a career path as a graffiti vandal.

At any rate, I hopefully reasoned to myself, if nothing else it’s still possible he might end up with a guernsey signed by some key figures from the Crows’ next premiership team.

I recall thinking the same thing back in 2006 when, at a day at the races, I ended up winning a raffle draw and taking home a football signed by Mark Ricciuto and Neil Craig.

Which, at the time, seemed like it might be – at least sentimentally – worth something some day, and sooner rather than later. At the time, the Crows were flying at the top of the ladder, and runaway favourites to win the flag.

It did not end well, of course. It never does.

But as this season progresses, buffeted in turn by the giddying waves of optimism and despondency, the parallels with ’06 sharpen.

There are the obvious ones: that under Craig’s understudy from the ‘05/’06 era we are playing a similarly well-drilled brand of fast, attacking football built from defensive rebound that occasionally falters through an unflappable faith in the gameplan.

Then there are the weird ones: like the prolonged absence of a key player at a crucial time of year because of a bizarre bout of illness.

Back in ’06, it was Roo who was struck down by parvovirus. Parvovirus FFS! A disease most of Adelaide had never even heard of to that point, that usually afflicts dogs and which – and I quote directly from the Canine Journal here – “is spread through a dog’s faeces whether through direct or indirect contact with the faeces of an infected dog”.

Seriously, a disease picked up by trawling through poo? Which is, appropriately, what it felt like as we picked apart the entrails of our season after bowing out in that home preliminary final to the Eagles.

This time round, it’s Tom Lynch who’s been sidelined, by viral meningitis – which is slightly less odd but no less annoying.

And in hindsight, that shitful loss against North in Hobart was this year’s equivalent of our thrashing by West Coast in Round 17, 2006. The match that showed everyone else how to beat the then-high-flying Crows, and after which we always felt vulnerable, beatable, mortal.

Adelaide’s best player on that horrid day 11 years ago this month was Scotty Thompson, who garnered 30 possessions in a battered midfield that against West Coast’s Brownlow-laden lineup became The Little Engine-Room That Couldn’t.

I had some trepidation about Thommo’s recall against the Bulldogs on Friday night, because it had all the hallmarks of something for which you’d canvassed loudly that actually turned out to be a really stupid idea. Like argumentatively demanding that last shot of tequila that then makes you throw up five minutes later. 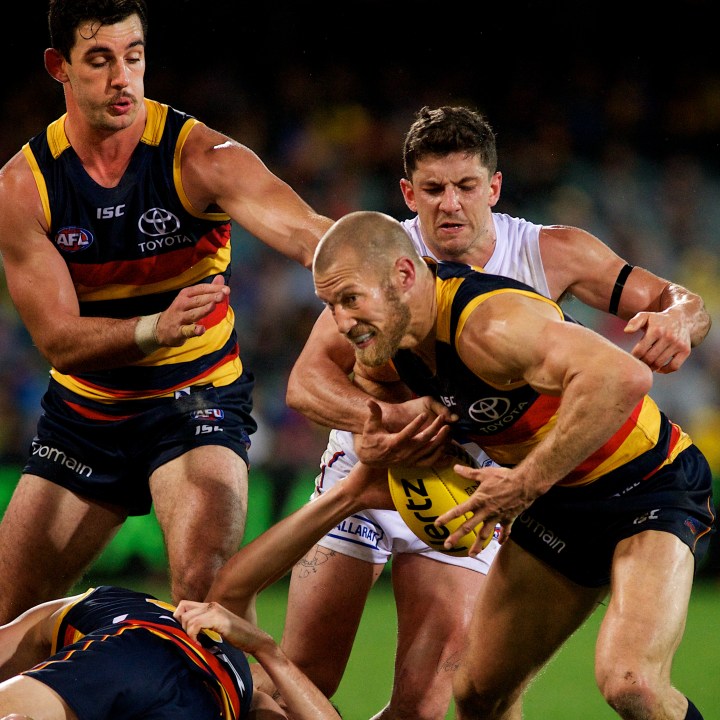 And sure enough, Thommo added some grunt into the midfield, laying tackles and generally throwing his weight around. But unfortunately he threw it around a little too liberally, giving away five free kicks, while picking up a team-low 10 touches. I’ve no doubt he’ll find the pace of the game again, given time. But time is no longer on his side, and there’s every chance we’ve seen him play his last senior game.

Which is all pretty sad, really. 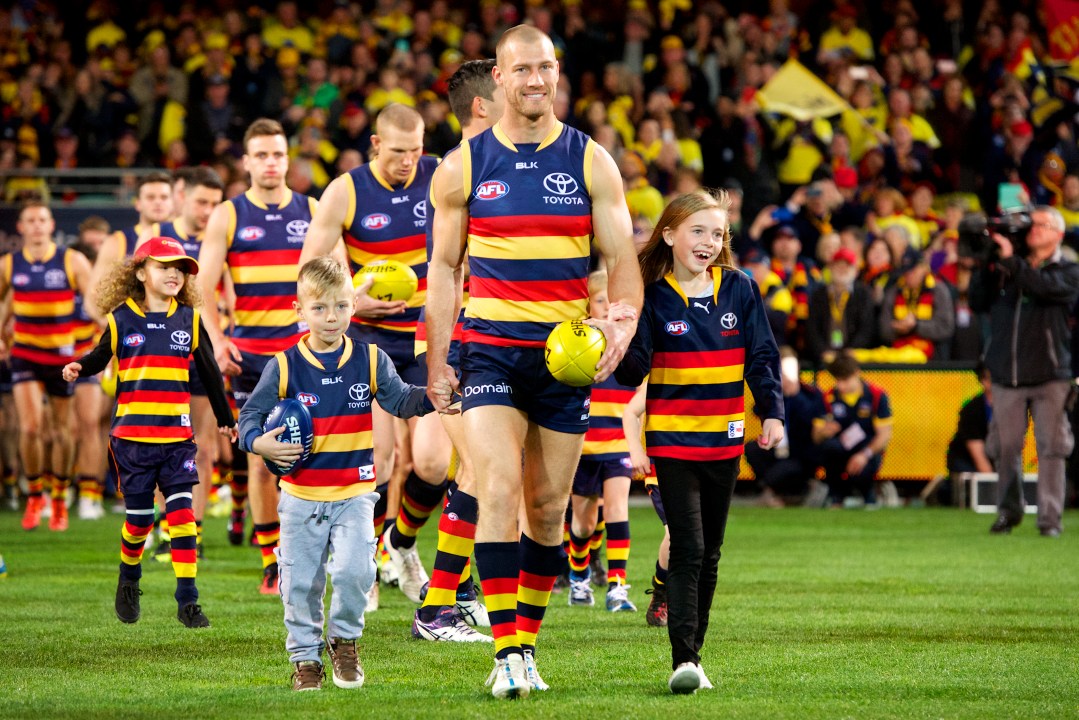 Scott Thompson at his 300th game with some of his Crows teammates. Or possibly his kids. Photo: Michael Errey / InDaily

I’m not one of those who argues our midfield doesn’t have room for Thommo alongside players of similar ilk, such as the Brothers Crouch and Rory Sloane. After all, they played there together to fine effect in years gone by (or at least were supposed to if the elder Crouch hadn’t been constantly injured). But it’s certainly true that the midfield remains a tad one-paced and has, as Tom Cruise once put it, a need for speed.

I liked the look of that Number 35 for Geelong on the weekend. We should find out if he’s available.

Of course, Danger was always going to play a blinder to mark the arrival of his firstborn, George Patrick Dangerfield, whom he modestly only partly-named after himself (and partly, perhaps, in an ironic homage to George Horlin-Smith?).

The Crows, in a cheeky social media post, jokingly put in a future father-son bid for young George, which is of course a splendid idea, as he would no doubt do great things in an Adelaide jumper. Before pissing off to win two Brownlows somewhere else.

Now, I know we’re gun-shy on this sort of thing, but does Jake Lever have to keep rubbing our faces in his impending departure by playing so damn well?

And why do we keep recruiting guys who are a better than even chance of leaving?

I mean, even the guy’s name is a dead giveaway, for God’s sake!

We had to tempt fate by recruiting someone called “Lever”. At least Brisbane cleverly took this into account when it signed ‘Daniel McStay’.

And yet, despite it all, here we are somehow atop the ladder after 16 rounds.

Someone on social media pondered how the footy gods had allowed this to be so, given our patchy form. I can only deduce we have some compromising photos of the footy gods stashed away somewhere. 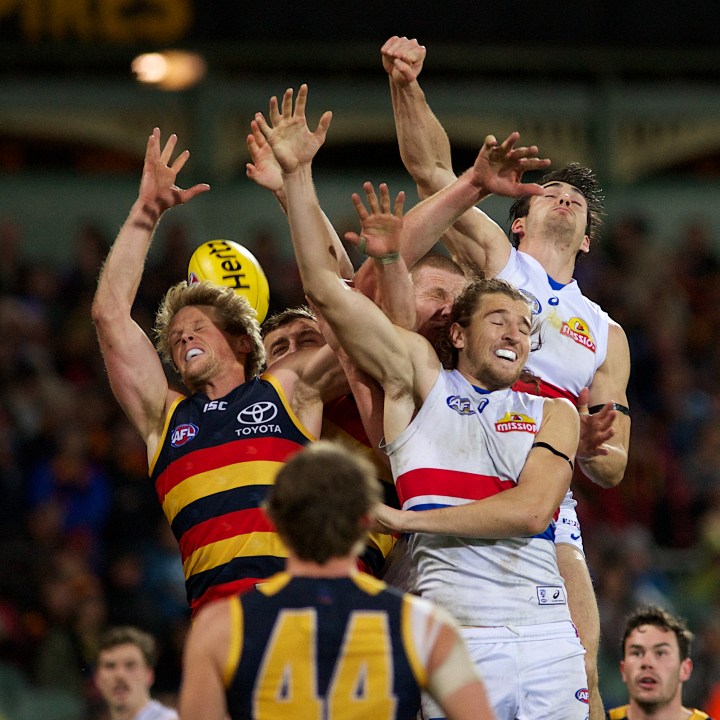 Are we tempting the footy gods again in 2017? Photo: Michael Errey / InDaily

How else to explain the Giants’ weekend draw with Hawthorn, their second in as many weeks, and the first team to tie a game in successive matches since 1921? They must have felt like Bruce Willis in Die Hard 2, wondering as the siren sounded: “How could the same shit happen to the same team twice?”

(For a brief moment at the end of the first quarter on Saturday night, I allowed myself the forlorn hope that this season was just crazy enough for Brisbane to draw with Geelong as well, but they unkindly lost by 85 instead.)

The previous week’s GWS-Geelong draw was cruel for the Crows, as it ensured our astronomical percentage was meaningless if either team finished with the same number of wins as we did. But GWS managed to right the wrong, and in the process handed us top spot on the ladder – appropriately by percentage.

On account of which everyone in the world is now certain Adelaide are a lock for the top three. Apart from all the people that actually barrack for them, of course.

And even if we do prevail to snare top spot, it now seems better than even odds that our long-sought home-ground advantage will be meaningless, because we’ll probably be playing Port Bloody Adelaide.

Of all the great ironies of the weekend, my favourite is that Port finally managed to beat a side in the top eight… and by so doing ensured that they weren’t actually a top-eight side anymore.

Which made it less impressive somehow.

As did the fact the team that beat them at home the weekend before gave up 14 goals to one in the first half against a lower-rung team on Saturday night.

In a year of Richmondy performances, this was probably Peak Richmond by the Tigers, who always like to wait until everyone has acknowledged them as ‘the real deal’ before spectacularly imploding.

Port though, to be fair, put in a performance that stakes them out as a genuine contender, as they are wont to do once every fortnight or so.

They were, however, lucky they were playing West Coast who, as we all know, can’t win outside Melbourne.

And that’s not a puzzle I had hoped to see solved any time soon. Ideally never, really.

But certainly not at Adelaide’s expense. 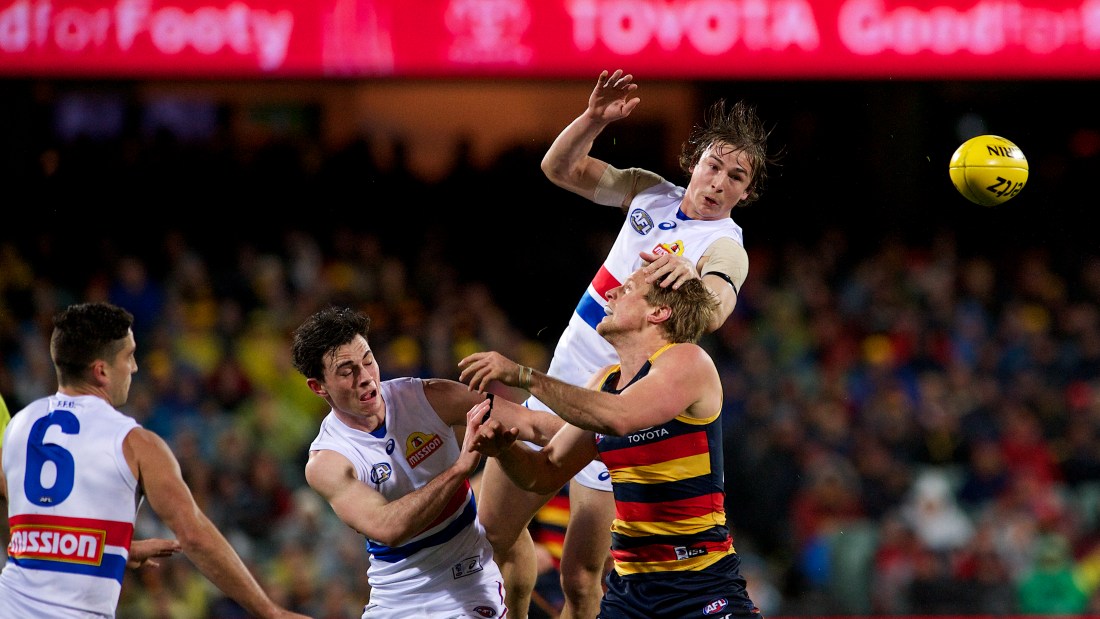 Picking a favourite this season is proving a headache. Photo: Michael Errey / InDaily

For, as of this week, Don Pyke has spent more time on top of the ladder than any of his predecessors ever managed (unless you count the off-seasons of ’97 and ’98). And we find ourselves wrestling with the unlikely proposition that impartial observers actually rate us as a Pretty Good Team, and the even less likely prospect that my kid’s defaced Crows guernsey might one day become a prized keepsake.

Although from where I’m standing, that only seems to magnify the size of the task before us.