Indeed, they hardly even gave us that, the Crows, en route to a dispiriting 14 point loss – though perhaps not one as surprising as it should have been when the first placed team on the ladder loses to the 17th.

By the end of the weekend, of course, we were no longer in first place, and the Hawks were no longer 17th. So it was really more like 16th beating second. Which isn’t really much of a consolation, but we must clutch at whatever clumsy straws we can in the aftermath of footballing weekends of this despondent ilk. 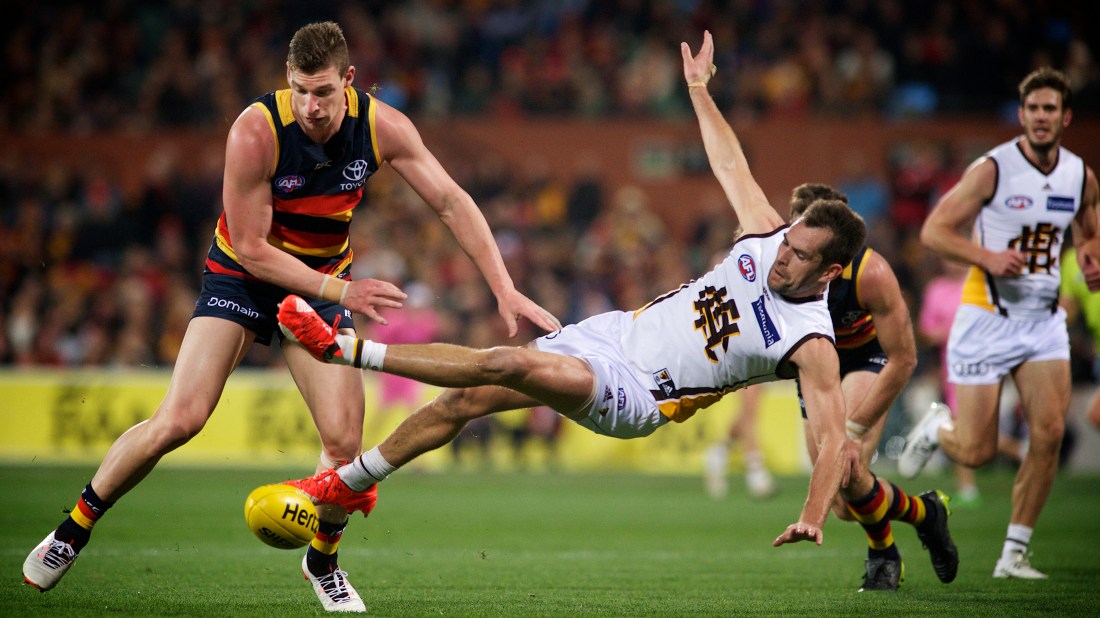 Just to recap: we blew top spot, flag favouritism, confidence, momentum and credibility – while Port gained at least the latter three as they effortlessly saw off the one-dimensional Magpies on a chilly Saturday afternoon at the MCG.

Collingwood managed just nine goals, while Robbie and Sam Gray had seven between them. Which meant, appropriately, the Black and White was almost matched by just two shades of Gray. 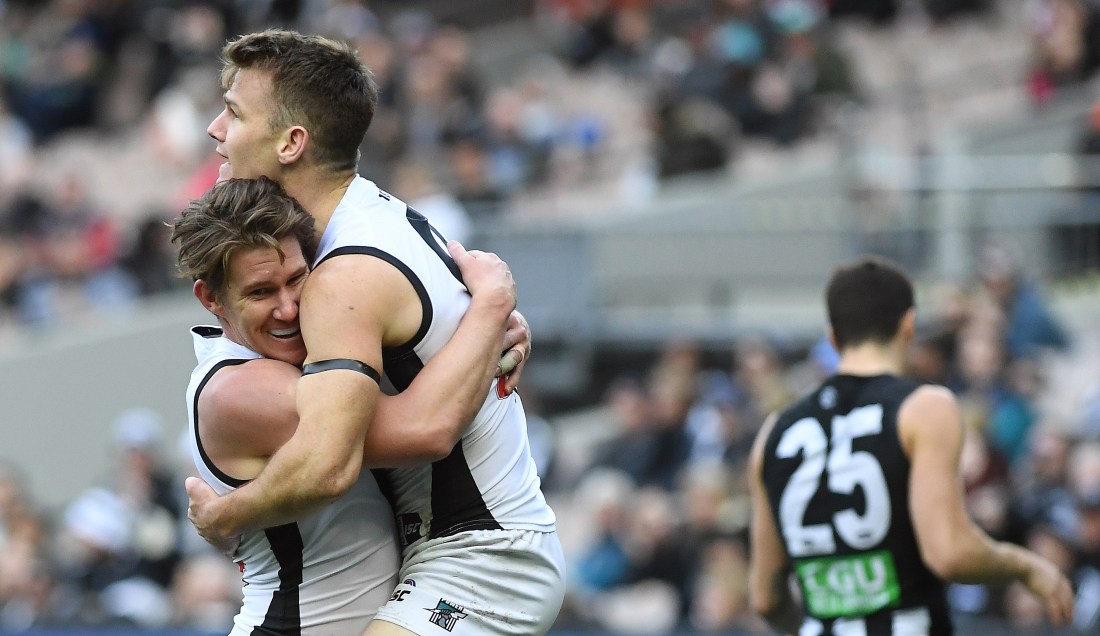 The signs were not good from the outset on Thursday, when I turned on the telly to find FoxFooty replaying the final quarter of the 2007 elimination final, another Hawks game in which we entered as favourites and went home scarred for life. To add salt to the wound, the channel followed that up with the 2012 Prelim as well. Of course, it’s possible they were keen to even things up by playing a great historical Crows victory over Hawthorn too, but they probably gave up looking for one.

Still, I didn’t take any of this as the portent it clearly was, instead arguing with my mate who warned this was a ‘danger game’ that the only danger was of us falling short of a 100-point winning margin.

Even our stodgy first quarter didn’t alert me to the impending disaster, given first quarters are not really our thing anyway.

But as the night progressed, it was clear this match was to be an arm wrestle between one team with plenty to prove and another whose players had evidently spent the week working out inventive ways to spend their newly-minted salary increase.

Some bright spark had the idea of handing out thousands of Rory Sloane masks for supporters to wear in honour of the great man (albeit not as great as he was two months ago).

For some reason, though, seeing his own face staring back at him wherever he looked around the stands didn’t have the desired effect of soothing his shattered confidence. I can’t understand why making him feel like John Malkovich going inside the portal into his own head didn’t inspire him to greater heights, but there you go. 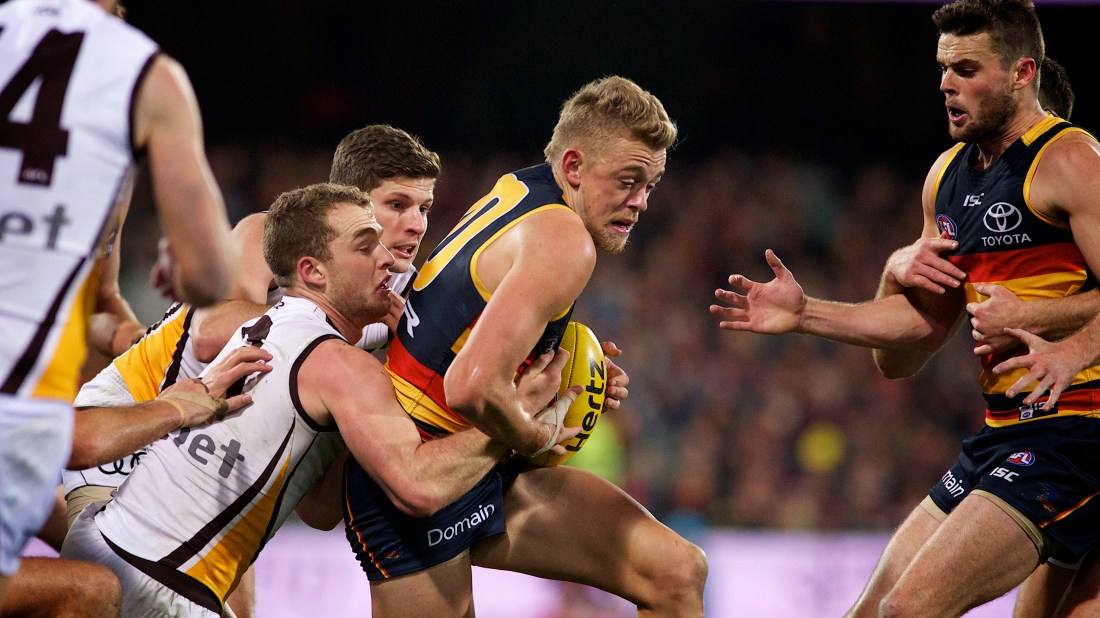 We should talk about Hugh Greenwood all week, because there is nothing else good to talk about. Photo: Michael Errey / InDaily

With just over three minutes left, we found ourselves, dispiritingly, just over three goals down. At home. Against the 17th-placed side. As the disgruntled masses streamed out of Adelaide Oval around me, I recall thinking that a team with talent, guts and resolve might find a way to forge a miracle from such a scenario, a last-gasp victory for the ages. A great escape.

And sure enough, they did.

Unfortunately, it happened exactly 24 hours later, at the SCG.

And then twice more another 24 hours on, in concurrent matches in Perth and Melbourne. And again a day later in Geelong.

This was a round in which good teams dug deep and found a way to win.

And where average teams whose players’ collective egos are still mired in the opening six rounds that for the rest of us now seem like some blissful long-forgotten dream meekly collapse like the pretenders they are.

Oh, and just to rub it in, that sort-of-handy player we discarded last year after not allowing him to play enough games to activate his contract extension was among Hawthorn’s best against us, with 30 possessions and two decisive goals. 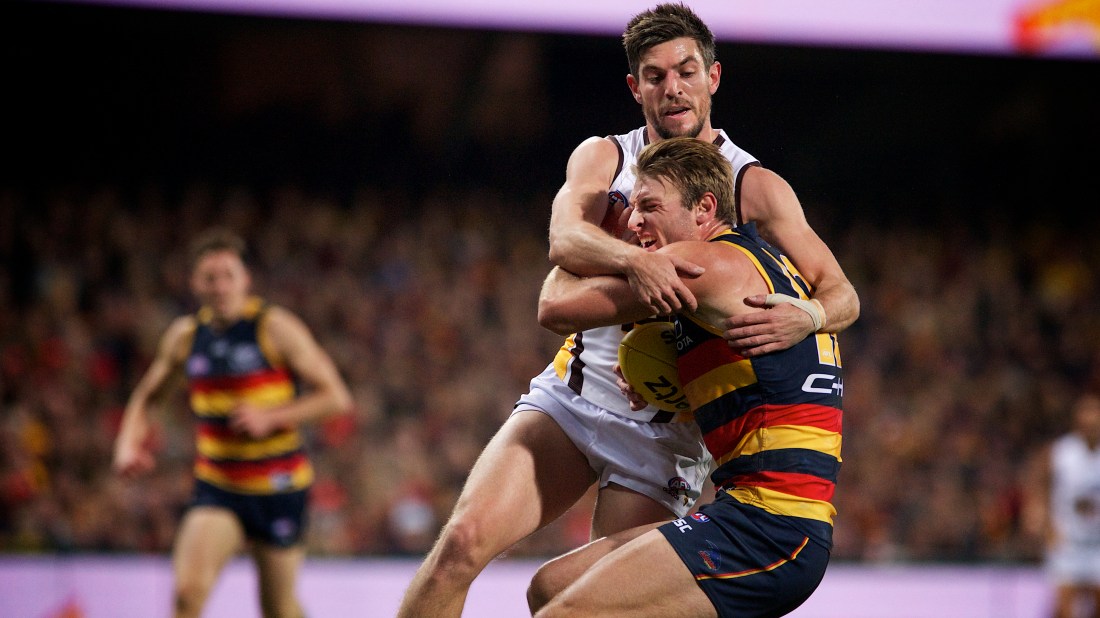 Just to be clear about all this: not only are we no longer, even arguably, the best team in the competition.

We’re not even the best team in South Australia.

Moreover, our 2017 strategy of ‘Hoping every other team in the eight loses so we can hover tenuously on top of the ladder’ might need a rethink too.

As fervently as we might have wished for it, GWS losing to the Brisbane Lions was never much of a prospect, given that the Giants are actually a race of genetically-manufactured superbeings charged with cruelling our best flag chance in a decade. 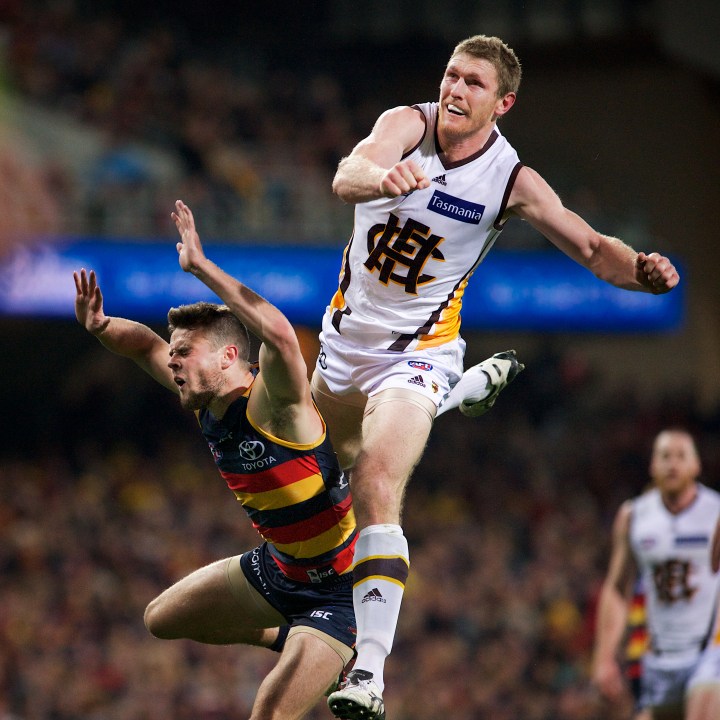 Sure, they’ve been dealt a few injury blows; Brett Deledio should probably be nicknamed ‘Petting Zoo’, since he’s always nursing a calf. But even with all their injured stars, they seem to have a production line of replicants ready to step into their place. While the Crows carry on throwing out glib clichés about ‘doing the little things better’, and being ‘still well-placed’ near the top of the ladder, and describing the evident fact that opposing teams have cracked Don Pyke’s decreasingly-enviable gameplan as “just something we’ve got to work through”. All the while sounding like that Iraqi information minister, denying the impending fall of his regime even as the tanks rolled in behind him. 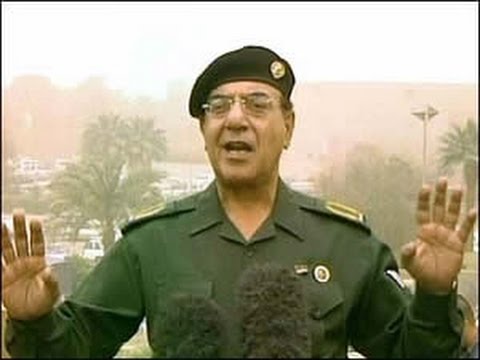 “Not to worry, we’re still well placed at the end of Round 14, we just need a big week on the training track to work through a few things…”

We’ve now lost four of our last seven and our current place at second on the ladder feels more like when the Roadrunner’s Wile E. Coyote steps off the edge of a precipice and hovers mid-air for a moment before plummeting to his grisly fate.

As we stand right now, we’d probably start favourites for just two of our next nine matches.

Literally the only consolation of the weekend is that we’ve finally got the split bye rounds out of the way, and I won’t have to find myself spending an entire night chasing the football dragon by watching some godawful match-up like St Kilda versus North Melbourne for at least another year.

I mean, I genuinely can’t think of two teams that I feel less inclined to watch playing one another – and yet the AFL thought it would be a great way to showcase the code on a Friday night.

At the time, the Saints could have gone as high as 10th while a North win would have catapulted them into 12th, which merely highlighted the exercise in midtable mediocrity between two teams with nothing much on the line, about a dozen supporters apiece and hardly even a marquee player to liven things up.

Even the milestone subplot – Lachie Hansen’s 150th – was neither here nor there.

And it was fair to say the match itself lived up to all those expectations and then some. You can tell a game has been poor when even the commentators can’t find anything good to say about it: post-match summaries included: “A pretty ordinary game in front of just 26,000 fans”, “it was a lacklustre game, no doubt about that” and “well, the Saints got the four points and not much else”. 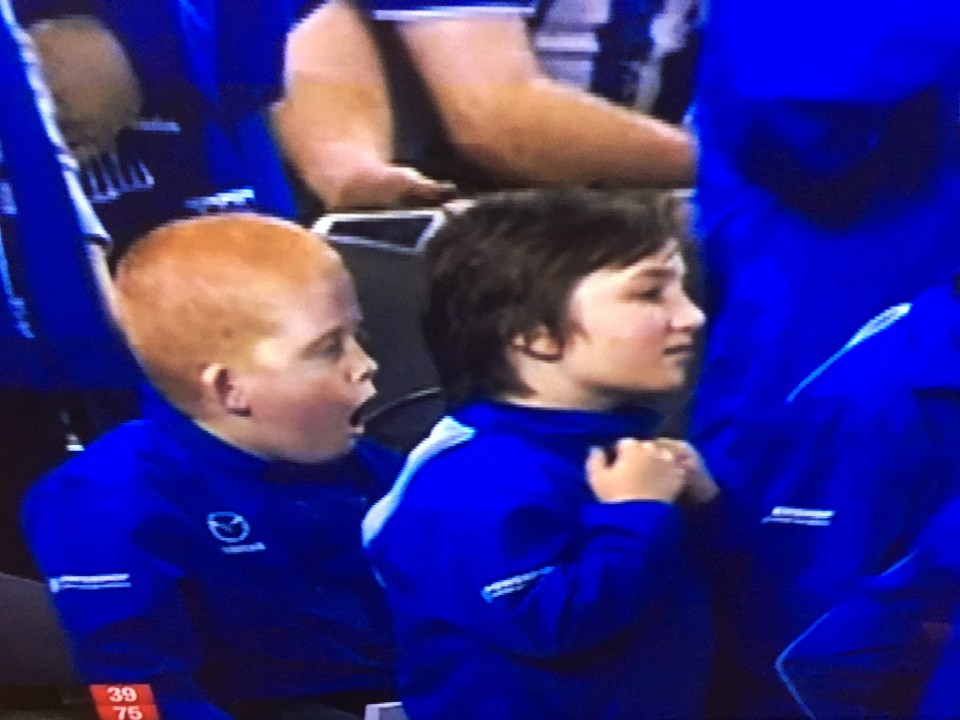 A young North Melbourne supporter sums up Fumbles’ feelings on watching the previous week’s round without his team playing. Photo via FoxFooty

In fact, it was quite possibly the single worst game of all time from before the bounce to after the final siren. And it is a sad indictment on my life that I watched pretty much the entire thing.

So it’s good to have the whole cohort of sides back playing, so I can be disappointed by my own team again, instead of someone else’s. 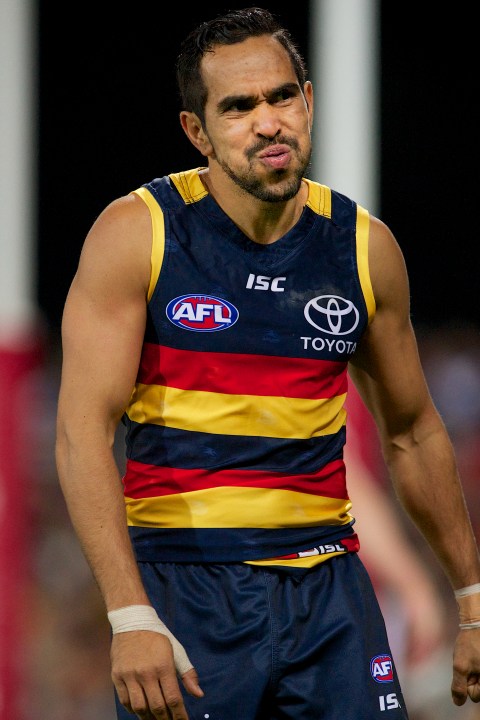 It’s nice to be let down by your own team again. Photo: Michael Errey / InDaily

I left Adelaide Oval and sunk solemnly into my seat on the Footy Express. And then, in accordance with the evening’s theme of ‘expectation v reality’, the bus that I expected to drop me home for free promptly broke down instead.

As I and my fellow battle-weary passengers sat pondering which monumentally-flawed life choices had brought us to this point, I heard a young boy behind me muse thoughtfully to his mum that “we’ll probably move down the ladder now”.

I felt like I should turn around and patiently explain to him that the next 20 years of his life would be basically a write-off, and that he should get off this god-forsaken bus right now, keep walking and never turn back. 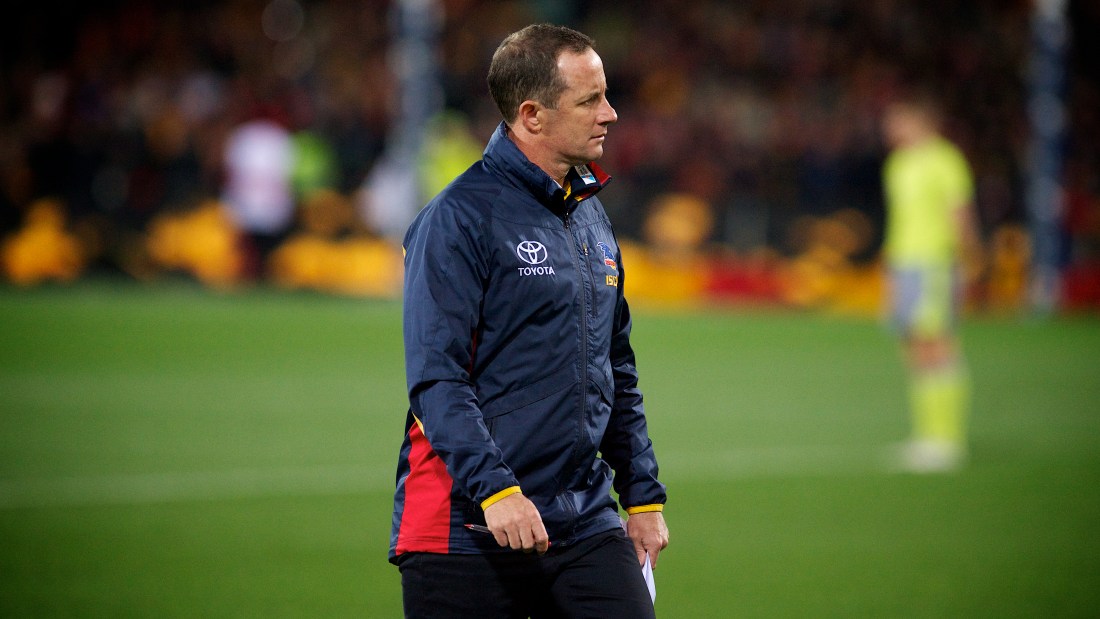 Instead I waited patiently for the arrival of a replacement bus, onto which I meekly transferred. So the kid, like me, will return another week, ready to have our expectations dashed anew.

If only all our busted-up bandwagons were so easily abandoned.