We complain a lot here at Fumbleland – sometimes even with good reason.

But in honour of the weekend’s dubious achievement of managing to soundly defeat the league’s 18th-ranked side (which, it must be admitted, looked no sure outcome early) it’s probably a day to look at the bigger picture with a certain sense of gratitude.

For all of our multitudinous gripes as Adelaide supporters, we can at least thank our lucky stars that we do not support Richmond. 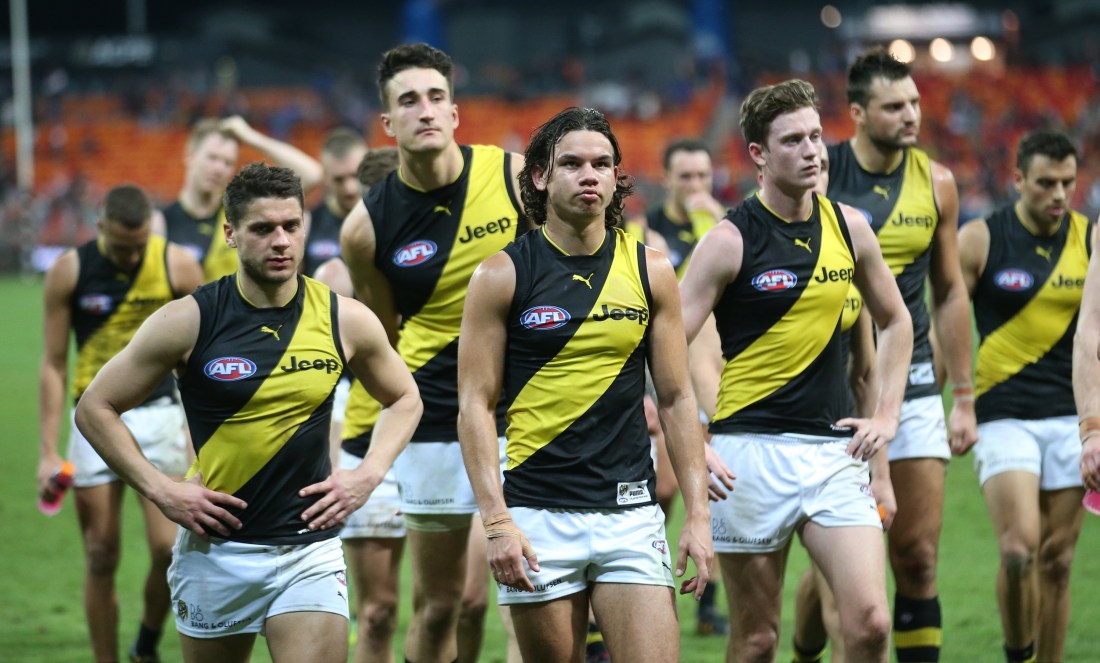 WHOOPS, THEY DID IT AGAIN: Tigers players leave the field after their last-gasp loss to GWS. Photo: David Moir / AAP

As far as I’m aware, I only know one Tigers supporter. It is possible I know more, but it is equally possible that if you were unfortunate enough to be a member of the Richmond faithful (for want of a better term), you wouldn’t advertise the fact.

To call their capitulation to GWS a shock would overstate it: once the Giants kicked their way within 20 points in the last, you just kinda knew what was coming. But we kept watching, the same way people can’t help but crane their necks as they drive past road crashes.

And, true to form, they still had to twist the dagger a bit before succumbing to the inevitable last-gasp defeat: first-gamer Shai Bolton thought he’d kicked the sealer with a little over a minute on the clock. But instead, the goal was overturned on review and the Giants went coast-to-coast to hit the front. So, really, instead of winning the game on debut, Bolton actually kicked the behind that caused the Tigers to lose. Ouch.

And this kind of thing is all part of the recurring nightmare of supporting Richmond.

I feel a smidgeon of guilt about the Crows ending the Tigers’ five-game winning streak to start the season, given they’ve since lost an incredible three games in succession by less than a kick – two of them having lost a lead in the dying seconds, and twice having thrown away a imposing margin in their favour.

This throwaway line from AAP’s match report probably sums up the Richmond malaise: “It is the first time an AFL side have lost three straight games by less than a goal since the Tigers did it in 2012.”

When I occasionally note that the Crows now boast the second-longest grand final drought in the competition (latter-day entrants Gold Coast and GWS aside), there are no prizes for guessing the team we are second to.

All of which is quite a long-winded way of conceding that complain as we might, deep down we all breathe a mighty sigh of relief that we are not Richmond fans.

Our own team’s psychological warfare against its own fanbase comes in more subtle and generally more palatable way: looking every bit the contender at some point in any given season, and waiting until we have thrown away our collective and well-earned skepticism before their annual capitulation.

In some ways, it seemed a relief that we appeared to be getting the grim wake-up call out of the way early this year: after two embarrassing losses on the trot, the team was struggling to get beyond first-gear in yet another lacklustre start against Brisbane.

Perhaps, I mused, as the Lions squandered their attacking dominance, we have jinxed ourselves with our marketing ploy. We deem ourselves the “Pride of South Australia”, and pride – as we all know – leads inevitably to a fall.

The players once again seemed to turn up their collective noses at the challenge on offer, as though the Number 1-ranked side having even to play the lowest-ranked team – let alone deigning to actually beat them – was a frankly insulting proposition.

These are the times the Crows’ collective intent seems summed up by the phrase: “I can do that but I don’t wanna.”

And so it was that the three first-half goals from debutant Hugh Greenwood – the Fumbles’ new Favourite Person Who Ever Lived – seemed to lift his more staid teammates from their semi-stupor. And make it somehow impossible to be entirely dismissive of our otherwise-forgettable outing (aside from the usual goal of the year contender from Eddie, but that is a given).

If we were ‘silver lining’ types, we could say that the upside of those two horrible losses in recent weeks was the long-awaiting blooding of uncapped players, with both Greenwood and Jordan Gallucci showing glimpses of great promise.

(We’re not ‘silver lining’ types, of course, if for no better reason than that would put us in the same Glass Half Full brigade as Damian Hardwick, who responded to Saturday’s heartbreaker by effusing about his “pride” that his side had “taken it up to every side they’ve played” in recent weeks.)

We’ve learned not to expect too much of debutants, but Greenwood’s was already such a compelling tale, with its capricious twists of fate and tinged with the looming personal tragedy of his mum’s terminal cancer. He walked out on an NBL contract to join Adelaide as a rookie, before this year captaining the Crows reserves side and, finally, earning a senior call-up.

Of course, there were always historical quirks to suggest he was destined for the Crows.

For instance. His college basketball coach at the New Mexico Lobos was called ‘Craig Neal’. 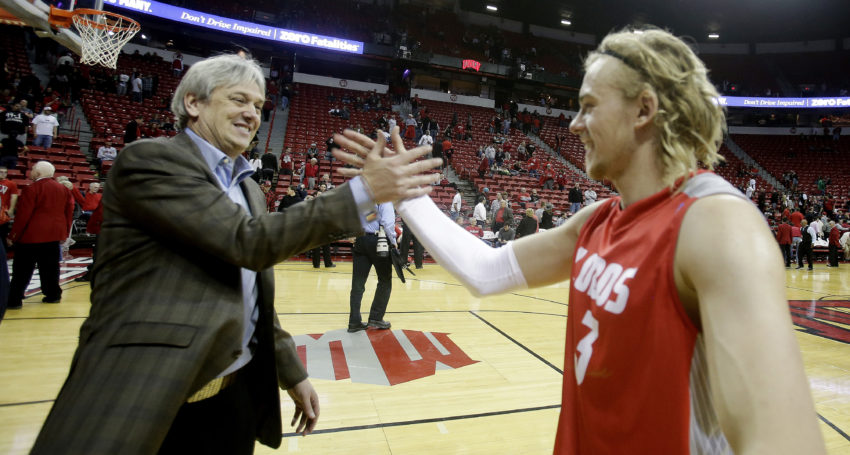 It’s not clear if ‘Neal, Craig’ used to respond to play-off defeats by philosophising that “the boys will have learned a lot from that kind of finals-like pressure”, or if he championed a game-plan that saw his side known colloquially as ‘The Lobots’.

But nonetheless, the parallels are quite uncanny.

According to the Bleacher Report, Neal “enjoyed initial success after taking over”.

“The Lobos went 27-7, including a 15-3 mark in Mountain West Conference play, during his first season in charge, en route to an NCAA tournament bid.

“The program didn’t sustain that success, though. UNM posted a middling 49-45 record over the [next] three years and failed to register any further March Madness appearances.”

He was subsequently sacked ahead of the current season.

What does all this mean? Well, nothing, obviously.

But there’s just a chance that Greenwood’s grand narrative, which culminated in his remarkable debut on Saturday, could yet be merely the first chapter in a long football journey. 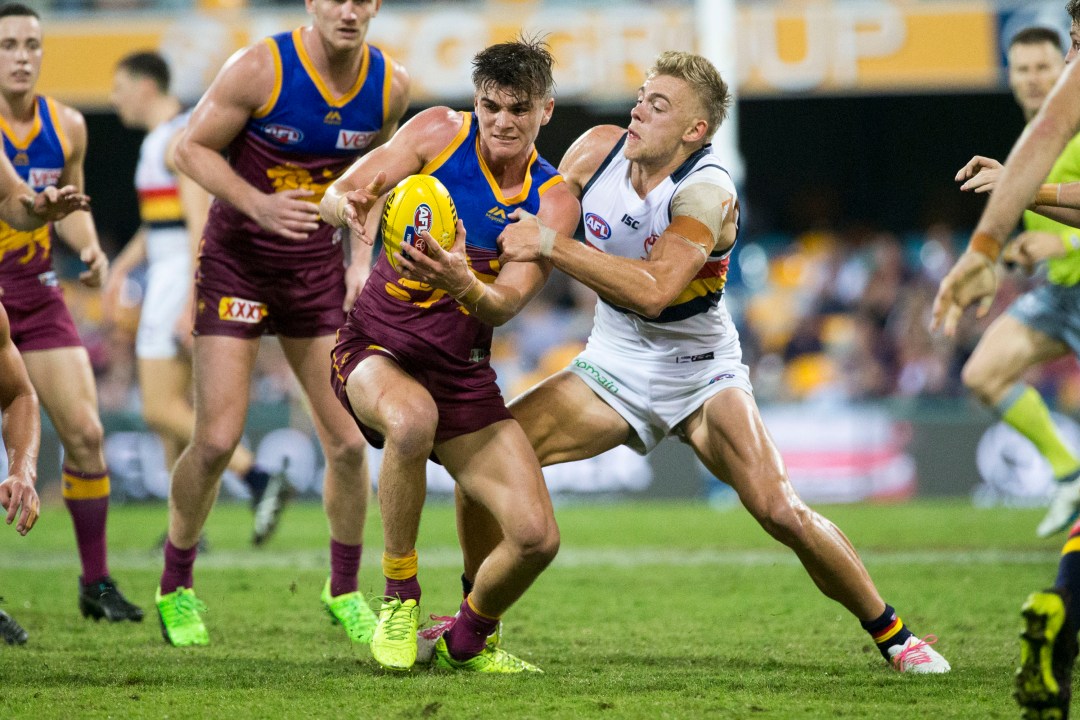 On top of his three goals, Greenwood had a team-high nine tackles – one of the few metrics in which the Crows lost to the Lions. Photo: Glenn Hunt / AAP

I hope his family at the game celebrated wildly, if only to embarrass the Crows suits who reportedly registered their annoyance at the rambunctiousness of Demons supporters in the $6800-per-person Premiership Club at Adelaide Oval last week.

Or, as most Melbourne fans would call it, the “cheap seats”.

There’s no official word on when the club intends to replace its “We Fly As One” slogan with the catchier “We decide who comes to our stadium and the circumstances in which they come”.

But it does seem an odd gambit for a club that has achieved very little for two decades to start officially perpetuating the cliché that its supporters would prefer those barracking for opposition clubs to give them a little peace and quiet and allow them to concentrate on their knitting.

In that context, it seemed apt that the club this week bought into the burgeoning eSports market, another medium dedicated to detaching spectators from reality.

Fortunately, the powers-that-be inform us that this is all about canny business diversification, insisting the club “will forever remain focused on our core objectives of winning football matches”.

So that’s a relief. And definitely an improvement on their previous core objective of “building up our supporters’ enthusiasm only to crush it spectacularly”.

But in any case, it’s significantly more rewarding than the Tigers’ core objective of “losing football matches by less than goal after blowing a match-winning lead”.

So we can’t complain. We are, after all, back on the winners’ list. The manner of the win might justifiably give rise to the suggestion that we are flat track bullies. But, after the fortnight just passed, I was just happy to be back on the flat track.