In fact, you’d be pretty pleased with how the whole year’s panning out, at this early stage.

Of course, we’re not one of those types here at Fumbleland.

But even then, even accounting for Port’s ominous touch against the (admittedly-lamentable) Lions, and even while accepting the decreasing likelihood that the Power will “do a Richmond” and suddenly reveal themselves to be Not Very Good After All after an annoyingly fast start to the season… well, it’s still hard not to be pretty darn happy about things.

Of course, it is only April (or May, by the time you actually read this). A lot of things can change between May and September – just ask Tony Abbott.

In the past 20 years, on only six occasions has the team that finished on top of the ladder at the end of the minor round gone on to win the Grand Final.

And, after having not done so in almost 20 years, winning a Grand Final is kind of the main aim here.

So in that sense, our odds might be better if we tank from here on in… right?

There was a time, maybe 10 or so years ago, when I could console myself when we didn’t even reach the year’s final match that we at least got to thrash Port in a semi-final along the way.

But we can no longer afford such indulgences.

We can, however, enjoy the fact that Geelong lost – and not merely for the obvious reason. 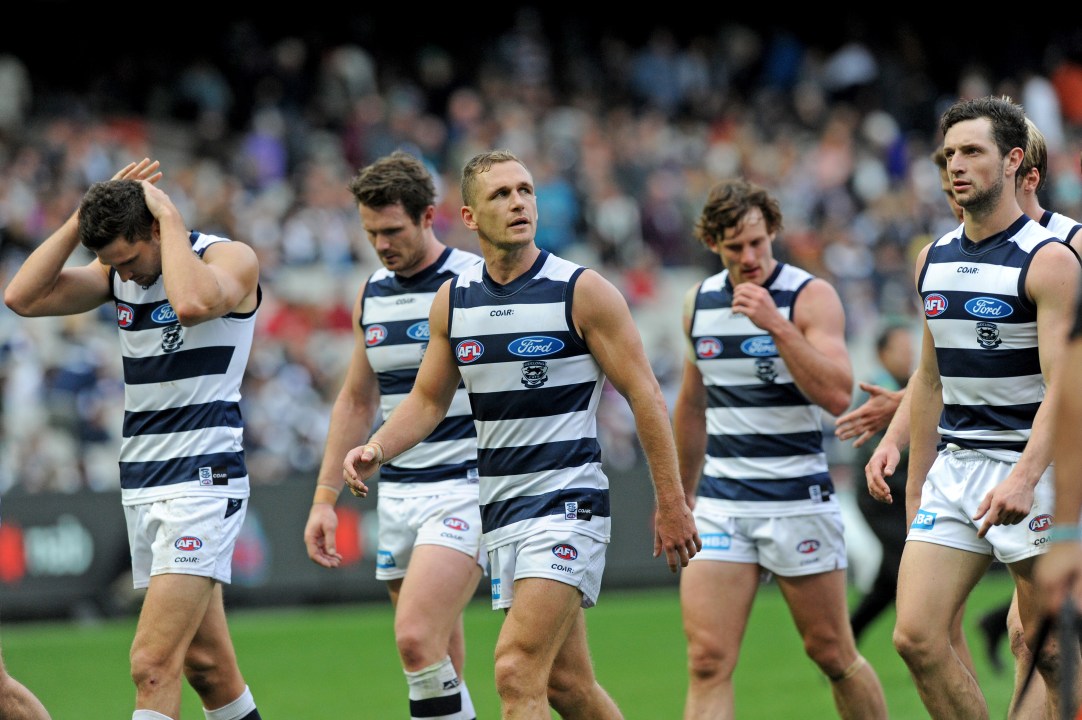 It also gave Adelaide a (small) break on the chasing pack and, perhaps, offered sides a template of how to curb the Cats, who we still have to play twice (at least) this year.

Collingwood coach Nathan Buckley, who played through a few hard tags in his day, effectively shut Joel Selwood out of the game, thus reviving the much-maligned tradition of the tagger. Perhaps that means we need another Robert Shirley, the guy who played the “bad guy” role for us during the tagger’s noughties-era heyday. He also kicked 28 career goals, every single one of them greeted with the following response from somewhere in the crowd:

I’d have to say, I really preferred them when they used to just talk about how good they were going to be, without actually being much good.

Now that they’ve worked out the second component of that proposition, they’re a lot less fun to watch (unless you’re a Port supporter, of course).

But when you have the luxury of having Chad Wingard streaming through the middle of the ground to set up Robbie Gray in the goal square (or vice versa, as is your wont) you’re obviously in a fairly invidious position.

But, for now at least, few if any teams are in as invidious a position as the Adelaide Crows – a thought that is vaguely terrifying. 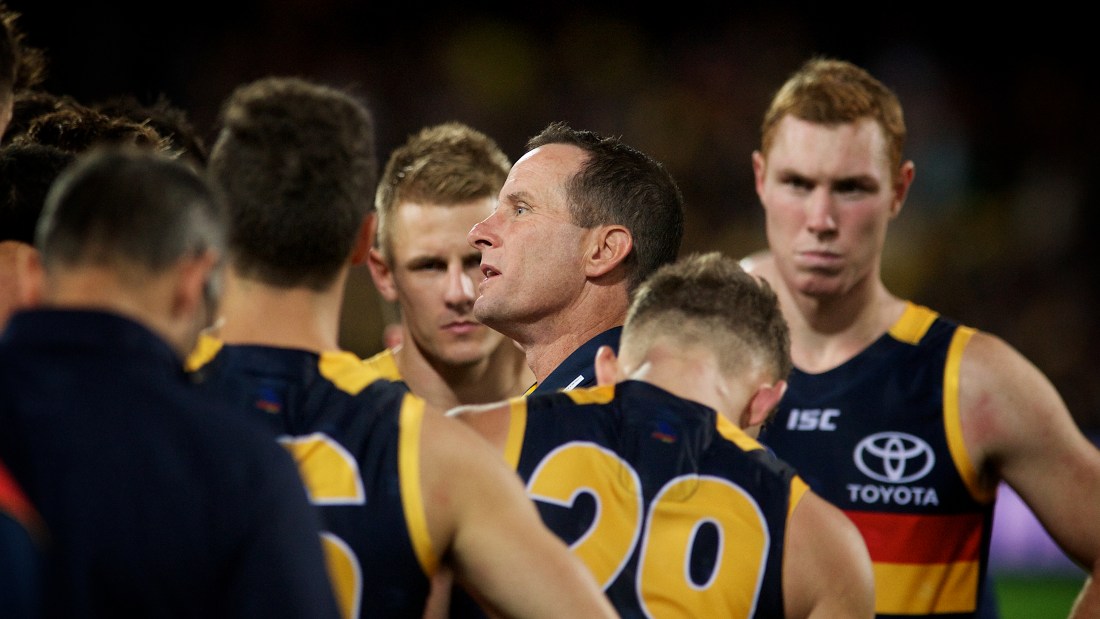 “Now the important thing is to not get carried away here…” Photo: Michael Errey / InDaily

Not that I had grave doubts about our ability to derail the Tiger train before it had even left the proverbial station.

I tend to have a good vibe about playing Richmond. Not for any particular reason, more just for the fact that over the years I tend to associate them with heavy defeats.

Indeed, they still hold the record for being on the receiving end of the Crows’ biggest-ever winning margin (139 points, waaaay back in 1993) and are responsible for two of our four biggest victories. Our 137-point romp over them late in the 1997 season en route to our first flag (with Darren Jarman kicking seven) gave us what was then our highest ever score (185) – and it remained as such for another nine years.

In fact, we’ve only ever kicked away to 100+ point margins 11 times over the years – and three of those times have been against the Tigers (albeit two of them occurred back when Paul Keating was still Prime Minister).

For a brief window during the final quarter yesterday, it seemed the Tiges were destined to make it four of 12, although they avoided that particular ignominy with a couple of late steadiers.

Then there were the various out-of-the-blue thrashings we’ve handed them at unexpected moments. In 2004 for instance, winless after four rounds, Gary Ayres’s side was expected to be trounced by a Danny Frawley-helmed Tigers outfit at home, but instead skipped away to a 10-goal half-time advantage on their way to a 75-point rout.

It was one of two occasions when Ayres bettered Frawley that year – he also managed to beat him to losing his job. But only just.

On top of all that, there were also a few genuinely decent games against the Tiges. Nigel Smart’s 200th in 2000 springs to mind: a pulsating, see-sawing Round 13 clash that saw the lead change hands willy-nilly, before the Crows kicked out to a nine point victory on the final siren, celebrating with a gusto rarely seen since their finals successes. After the game, then-fledgling Richmond coach Frawley hinted at his great football acumen when he dubbed us “a very, very good side that is going to beat a lot of teams this year”. We won just three of our remaining nine games and missed the finals. 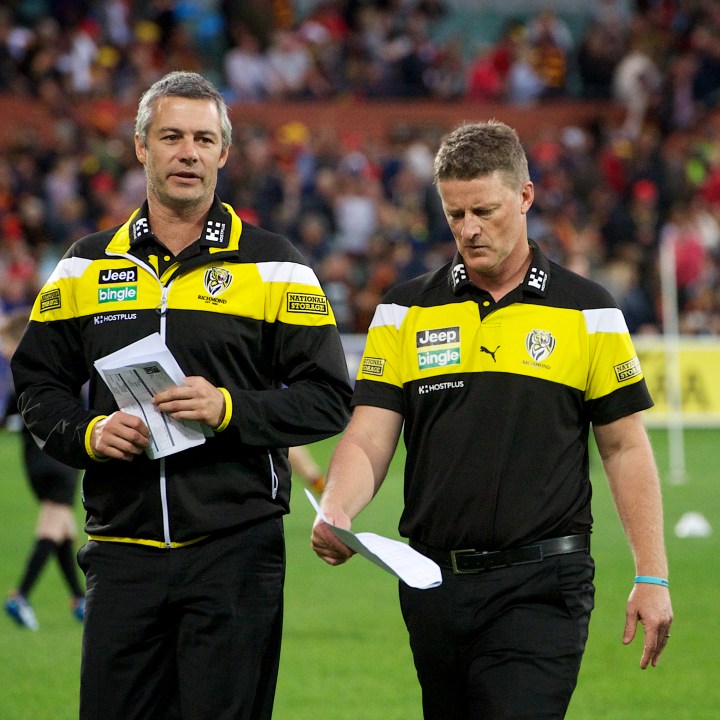 “Hey Dimma, remember when we won that premiership playing for Essendon together in 2000? Where did things go wrong…?” Photo: Michael Errey / InDaily

After so many years, football memories such as these become inextricably linked with the times, places and events of your life at the time.

Which tends to ensure you remember random football trivia as a way of contextualising other milestones.

For instance: the other day, some mates were recalling a friend’s wedding many years back and I helpfully pointed out that it was held on the same night that the Crows blew a handy lead against the Bulldogs by allowing them to kick nine goals to one in the third quarter.

I can also recall, for example, that I was in Sydney for the weekend in mid-April 2002, because I remember watching a home game where Ryan Fitzgerald kicked four goals for us in a win against his former side, the Swans, at the Royal Hotel in Randwick – which was back then among the only places in the state where you could safely assume the AFL would be on.

Then there are the bigger life events: on one particularly eventful afternoon a little under two years ago, my then one-year-old daughter obligingly waited until half-time in our away match against Essendon – by which time Adelaide had gone five goals clear – to take her first steps. As you can imagine, there was much celebration for both of these important achievements. The Crows went on to win by 112, and my daughter went on to take many more steps.

Indeed, they’ve both taken several great strides since that day.

In that 2015 Essendon game, for instance, Betts kicked an imperious five goals, and Jenkins three. The pair managed just two between them yesterday, with the latter barely influencing the contest for much of the game as he worked back into touch after his recent tummy troubles.

In times past, such a meagre return from those two would spell disaster; yesterday it just allowed the likes of Rory Sloane to hit the scoreboard instead – including via his weekly pack mark in front of goal. 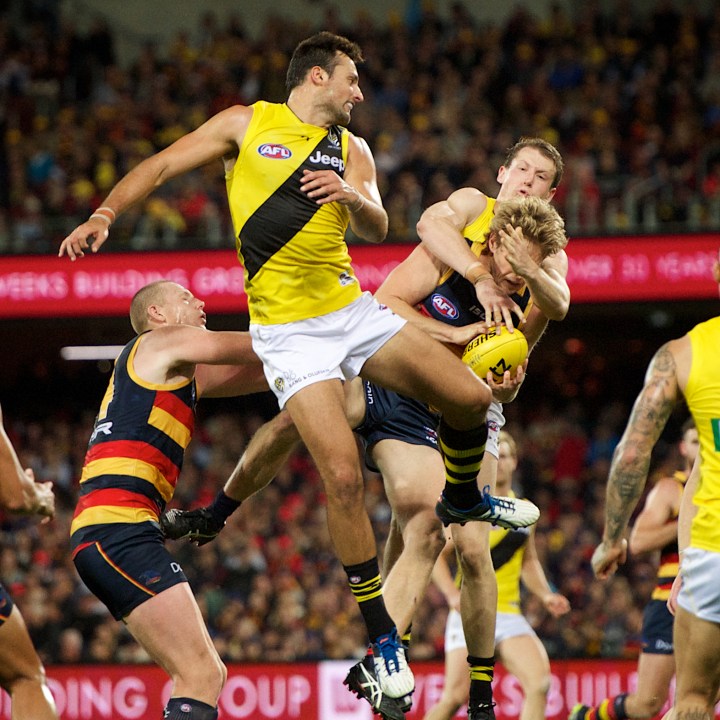 Rory is getting so good at clutch marks he can take them with his eyes shut. Photo: Michael Errey / InDaily

There is so much to like about this Adelaide outfit, not least Don Pyke’s grim determination to keep a lid on things, an eerie reminder of 2006, when Neil Craig refused to talk about finals until his side had secured the requisite 13 wins to make the major round anything more than a hypothetical (mind you, they managed that by Round 15, so it still gave everyone a good two months to legitimately pester him about the finals.) 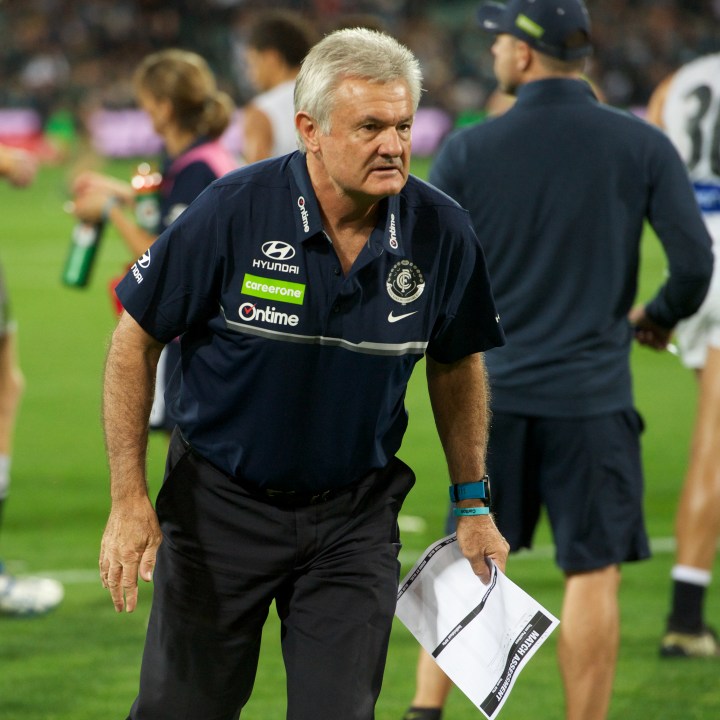 But this week the football world will be lauding Pyke’s Crows as premiership favourites, which is fine and great and all very well.

Most of them haven’t, after all, had to spend the past 20 years actually barracking for them, and won’t therefore appreciate that Adelaide is never so liable to disappoint as when we are deemed genuine contenders.

After all, as the old saying sort of goes, those whom the gods wish to destroy they first make mad with power. (By which I presume they mean “overconfident”, given I am generally mad with the Power one way or another. In any case, perhaps “mad with wild optimism” would be more apt?)

Lest it slip our mind, North Melbourne won their first NINE matches last year, but ultimately only just scraped into the final eight before being swiftly bundled out. (By us, incidentally.)

We are now in the form that inspires pundits to prognosticate that nothing less than a Grand Final appearance can be considered an acceptable return on this season.

And they’d have a point. 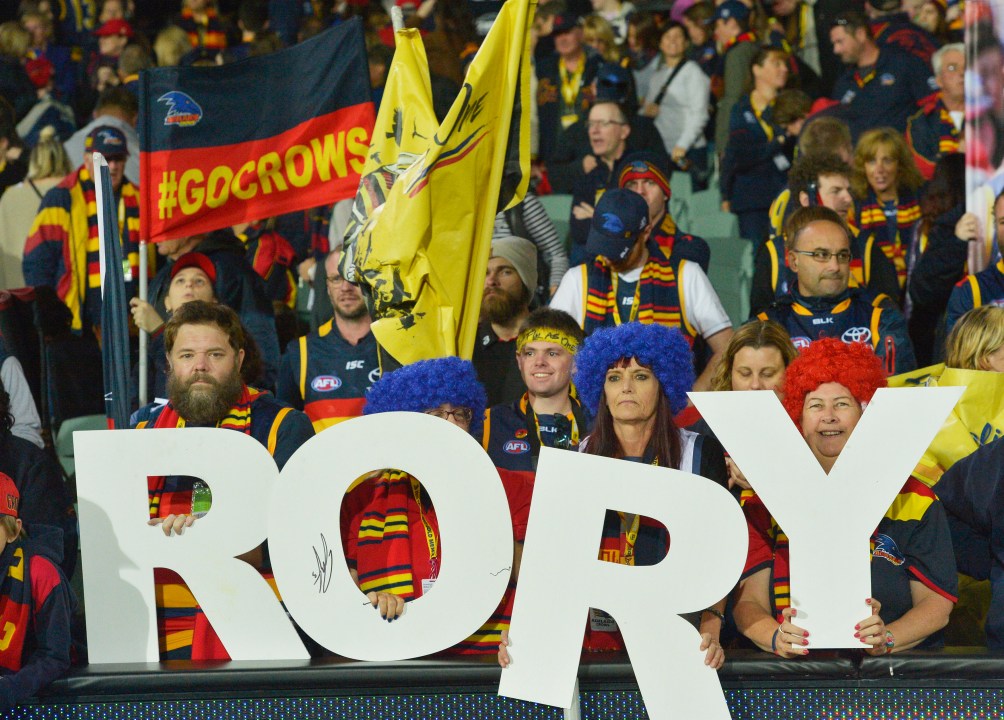 The great thing about supporting the Crows is that most of them have the same name, so you can save money on novelty letters. Photo: David Mariuz / AAP

We have, after all, been here before, so we appreciate more acutely than many that when two completely different teams are vying it out on that one day in September, no-one is going to much care who was on top of the ladder at the start of May.

But we’re not in September yet. And for now, at least, the Crows are on top of the ladder – a game clear with six wins straight to start the season and an astronomical percentage, having not kicked a single score below 100 all year. And for now – just for now – all is well with the world.

Until next week, at least.