As the weekend loomed, an ominous message announced its arrival with the arbitrary pip of my SMS alert.

It was my close personal former colleague Pete, of late an employee of the much-maligned Port Adelaide Football Club, inquiring if I was happy to speak to Channel 10 later that day in the event that the tickets for their away home game in China sold out that day.

Before I could even ponder my availability, let alone what the hell I would have to say on the matter, I received a hasty follow-up, informing me that the original message had been directed to the “wrong Richo”. 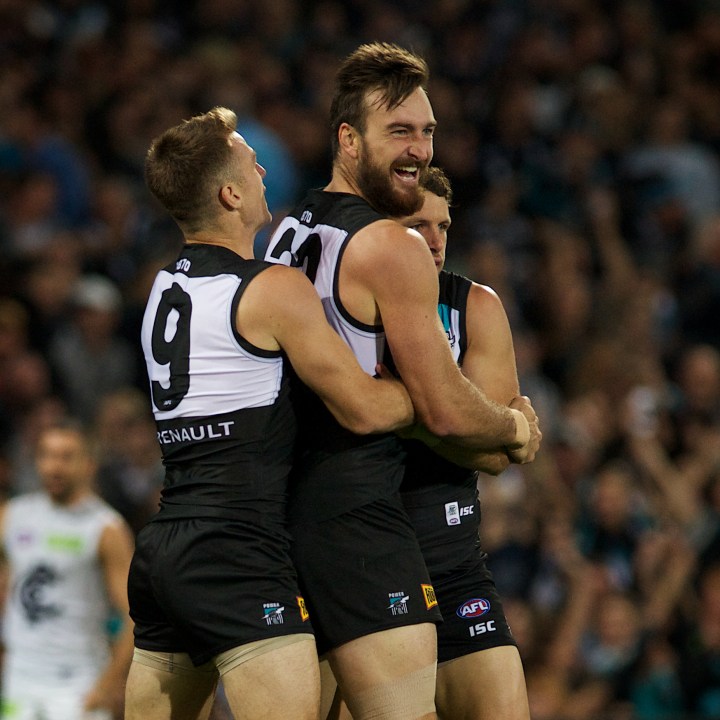 I don’t know whether the Right Richo ever got to front up on Channel 10, but I did note that the China game did eventually sell out. (Parenthetically, have we explored the full potential of this precedent whereby we can just buy out other clubs’ home games for a million bucks a pop? I’d say for a relatively small investment – say $4 or $5 mil – we could pretty much ensure an annual cakewalk to the finals. Hell, I’d even be magnanimous enough to let our opponents wear their home strip when they visit Adelaide Oval…)

And I note this because it is probably time to acknowledge that Port Adelaide appear to be doing irritatingly well both onfield and off thus far in 2017.

(It also raises serious questions about why I would be on such familiar terms with people from Port Adelaide, but that is another matter.)

And while the last time the Crows had a record unbeaten start to a season they ended up not only missing the finals but sacking their coach, it’s starting to look like we might be major-round-bound this year.

Which means it’s probably time to start considering who else appears finals-bound, to give us a few months to size up our opposition. 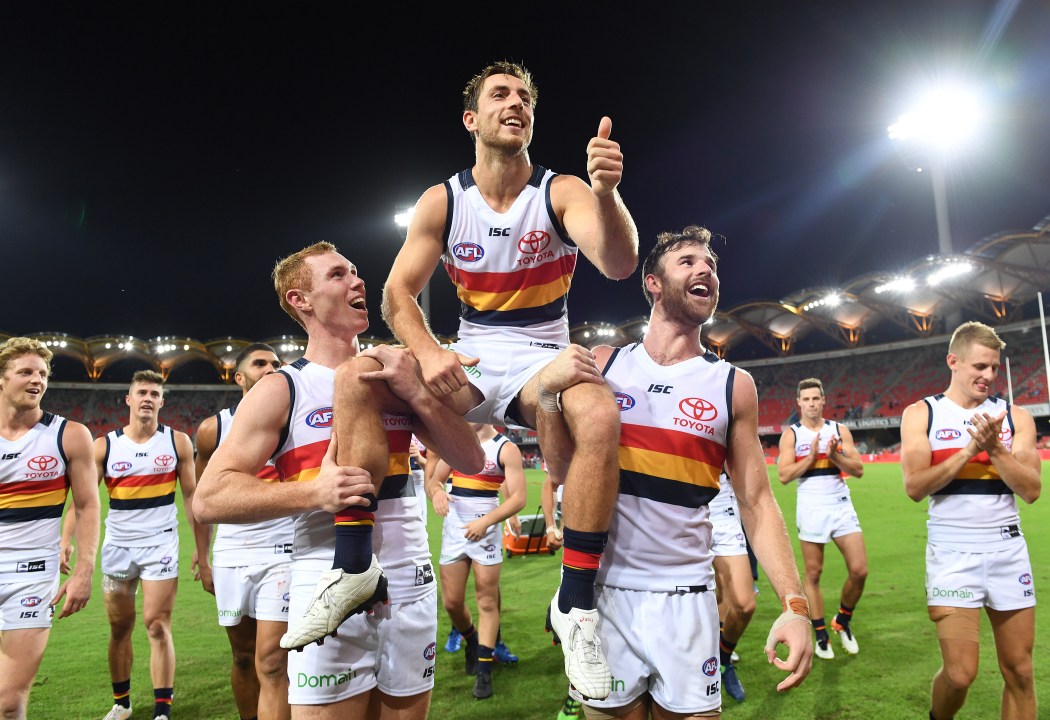 I don’t think it would be any great surprise to presume that GWS will feature in September, given they are now so confident that they can literally not start playing until five minutes into a game and still find themselves ahead by the end of the first quarter.

But annoyingly, it’s also looking increasingly clear that Geelong and – yes – the Power will push for berths in the ladder’s upper echelons.

Annoyingly, because if there’s one thing that scares me more than being bundled out of the finals (again), it’s the prospect of being bundled out by either Port Adelaide or any team featuring a certain Brownlow medallist who used to play for the Crows.

And the Cats’ persistence thus far this year is getting tiresome; seriously, if I have to hear some variant of the phrase “Geelong got out of jail again thanks to the valiant efforts of Dangerwood” once more this year I’ll be angrier than Brad Scott at the end of any given match.

Importantly, Port proved that they can be an AFL force, when playing at home against bad sides

But sadly, an even more ominous portent looms on the football horizon, one that troubles my thoughts even when it is not overtly bothering me with swiftly-retracted invitations to appear on commercial television news services and talk about its marketing successes. For it is time, yet again, to ponder the Power from Port. 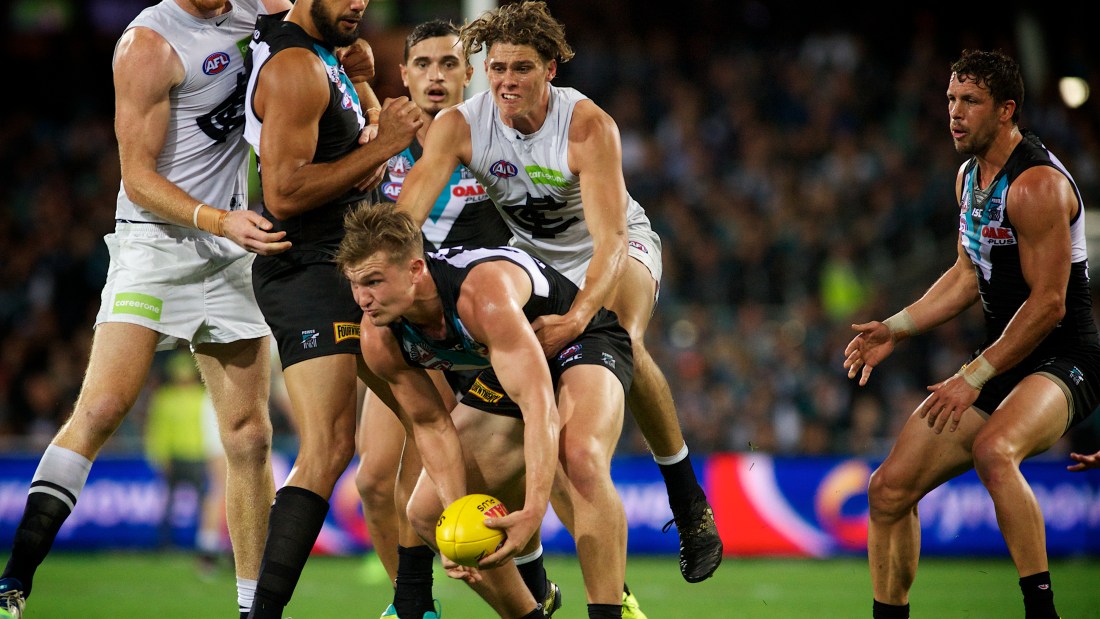 Their success on the national stage of Friday night football was significant, and not merely because it ensconced them in the top eight.

Importantly, after two seasons of mediocrity Port proved to the competition that they can be an AFL force (as long as they are playing at home against bad sides).

They also, distressingly, continue to turn up new talent. 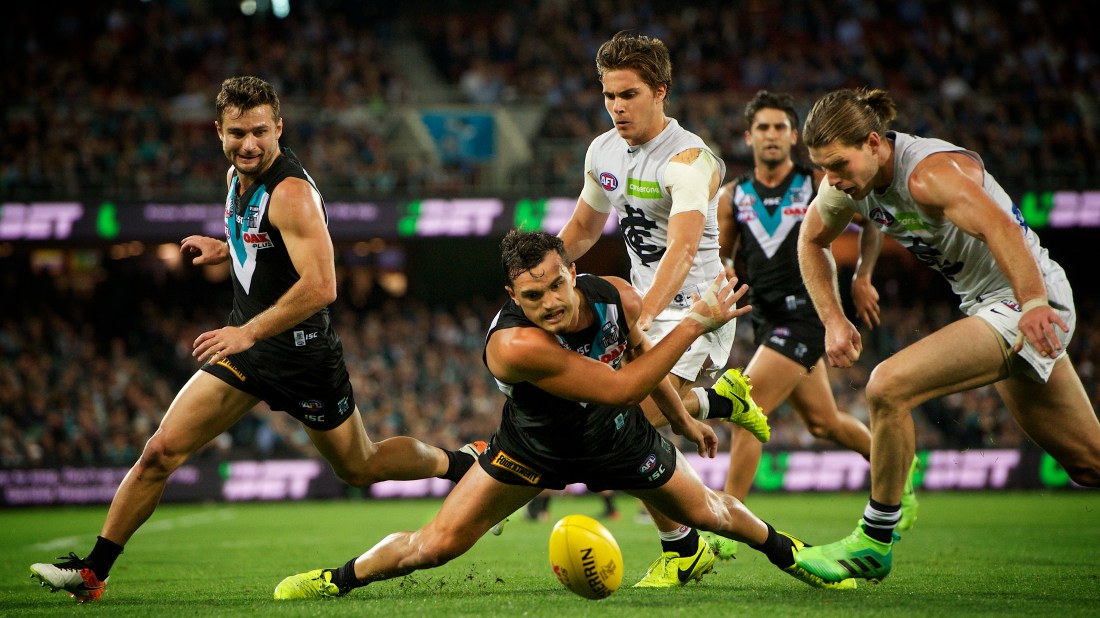 Debutant Aidyn Johnson played much the same role in the Power’s Friday night fixture as he did in a certain preseason hit-run escapade – that of the late inclusion who managed to steal a few headlines of his own.

He hasn’t played a lot of football of late, so it was hard to know what to expect, although I read somewhere that he is considered to be the fastest guy on Port Adelaide’s list (or maybe someone at SAPOL told me that, I forget). At any rate, he finished with two classy goals to ensure that, unlike during a certain preseason escapade, he was not a passenger on the night.

Despite the Blues’ turgid capitulation it is hard to stay mad at Carlton, after all the enjoyment they have provided in the equivalent fixture over the past two seasons.

But even though Port were largely playing against witches’ hats (and the witches’ hats largely had their measure for much of the first half) they will take confidence from the eventual magnitude of the win – and confidence is the intangible that might have been lost at Alberton in recent seasons.

It is, in fact, entirely possible that by the time they next have to play any actual teams (which isn’t until after the bye, assuming you count “West Coast Playing Away” as a pallid impersonator of a decent side) they might have convinced themselves that they are a genuinely good side themselves, instead of merely a middling one with a helpful draw.

Particularly if they start kicking straight. 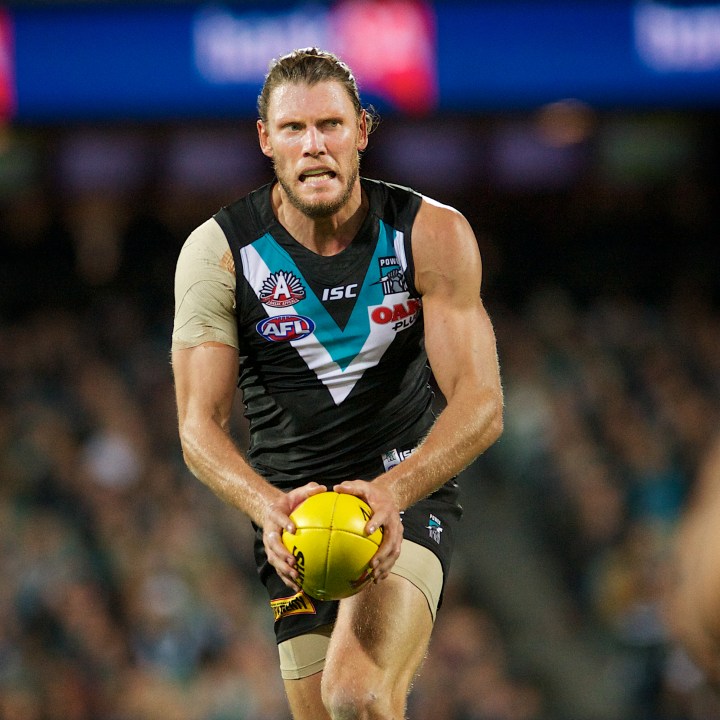 Nonetheless, as this season sorts itself out it’s becoming increasingly apparent that Adelaide’s draw has been kinder than first figured too. Of the sides we face only once, our away games are, by and large, against teams you’d consider beatable on the road (the likes of Gold Coast, Brisbane, North, Carlton and Collingwood) while we face the bulk of our tougher opponents (GWS, the Bulldogs, Sydney – assuming they regain some semblance of their mojo – and Richmond this weekend) at home.

Moreover, Port have a remarkably healthy injury list, at least compared with the burgeoning medical rooms at West Lakes, which these days more resemble a scene from M*A*S*H.

Did you ever catch that movie Final Destination? A bunch of guys get kicked off a plane, United Airlines style (no, it’s not about Harley Bennell); said plane then explodes on take-off, ensuring the extant passengers have effectively cheated death. But not to be outdone, over the ensuing weeks and months Death then visits each of them in turn to square up the ledger.

After a virtually injury-free season last year, this is fate’s way of evening things out for us.

We might as well rename the club’s medical rooms “Kleenex”, because everywhere you look there’s soft tissues.

It’s kind of like that old wacky verse by Spike Milligan, which told of the Nong Nang Ning where the trees go ‘Ping’ – if you take out the word ‘trees’ and replace it with ‘hamstrings’.

But still, what a noisy place to belong, on board the Crows bandwagon – that ubiquitous Pyke Cart – after a 5-0 start. 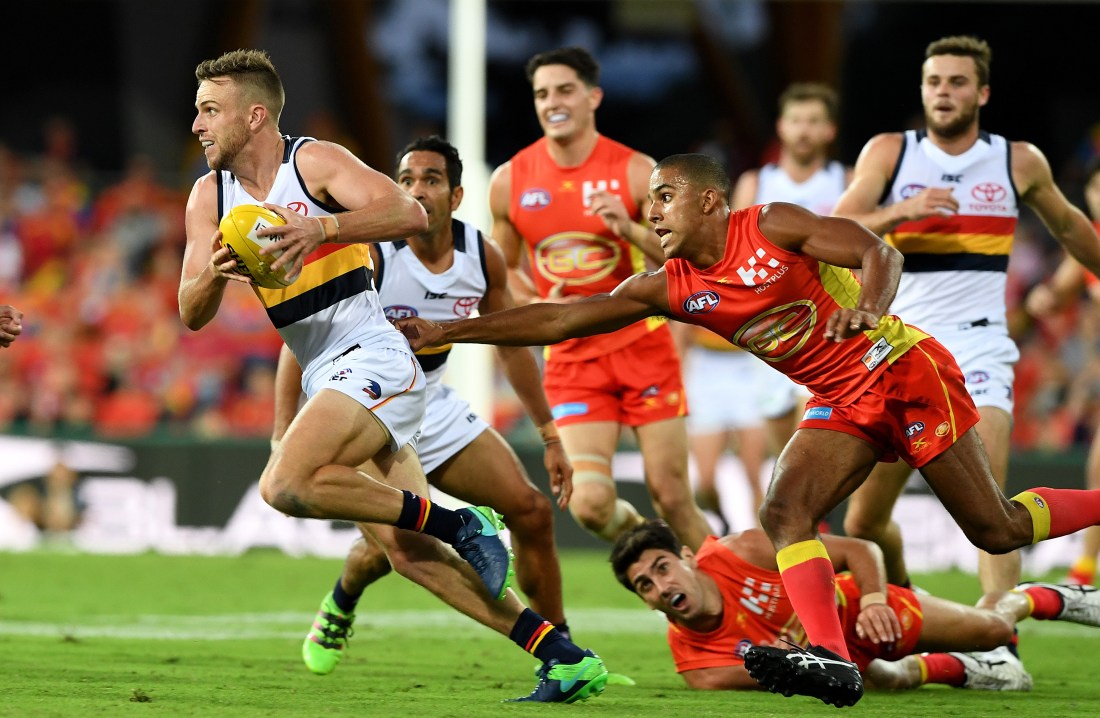 CATCH US IF YOU CAN: Brodie Smith puts unnecessary pressure on his posterior thigh muscles. Photo: Dave Hunt / AAP

While our end of season lament may yet be played on a lonesome harp – its morose plink plink plink a dour homage to our successive hamstring tweaks – for now ours is the music of raucous celebration, as the feelgood tales abound.

Andy Otten continues to demonstrate the old adage that when life gives you lemons you should make sweet lemonade (and also that when Rodney Eade gives you Lemmens you should outmuscle him for a free kick directly in front of goal to put your side 48 points up at the main break).

And Rory Atkins, tired of being the lesser-noticed of our Famous Abundances of Rories, turned back the clock to the days when any self-respecting Crows midfielder wore a sheen of peroxide on top (in the heyday of Vince, Biglands, Mackay, Van Berlo and Thompson the Adelaide engine room looked more like the Hitler Youth from The Sound Of Music).

The lingering fear though is that our prospective march towards a drought-breaking premiership could yet be cruelled by either a) nuclear war, b) a players’ strike, or c) our inherent propensity to implode at the business end of the season.

But as long as it’s not against Port Adelaide.